Scoot the Loop – Haven’t we been here before? 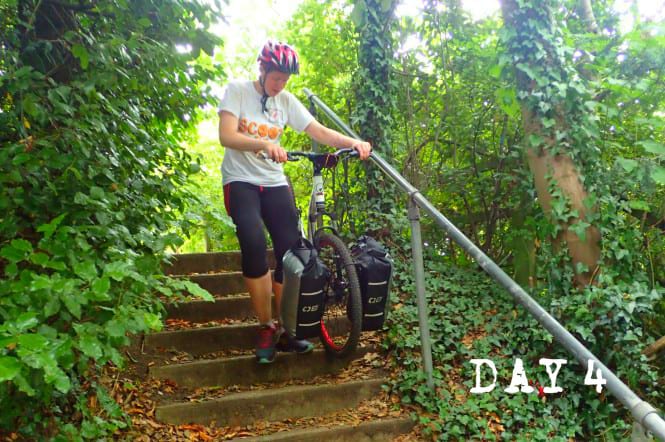 We stumbled across Hayes Common at 8.45pm and I had not an ounce left in me to go any further. I could see the park would be busy but I just wanted to get to sleep so we found a little alcove in the tree line, used our scooters turned upside down to pitch our tarp and settled in for the night. 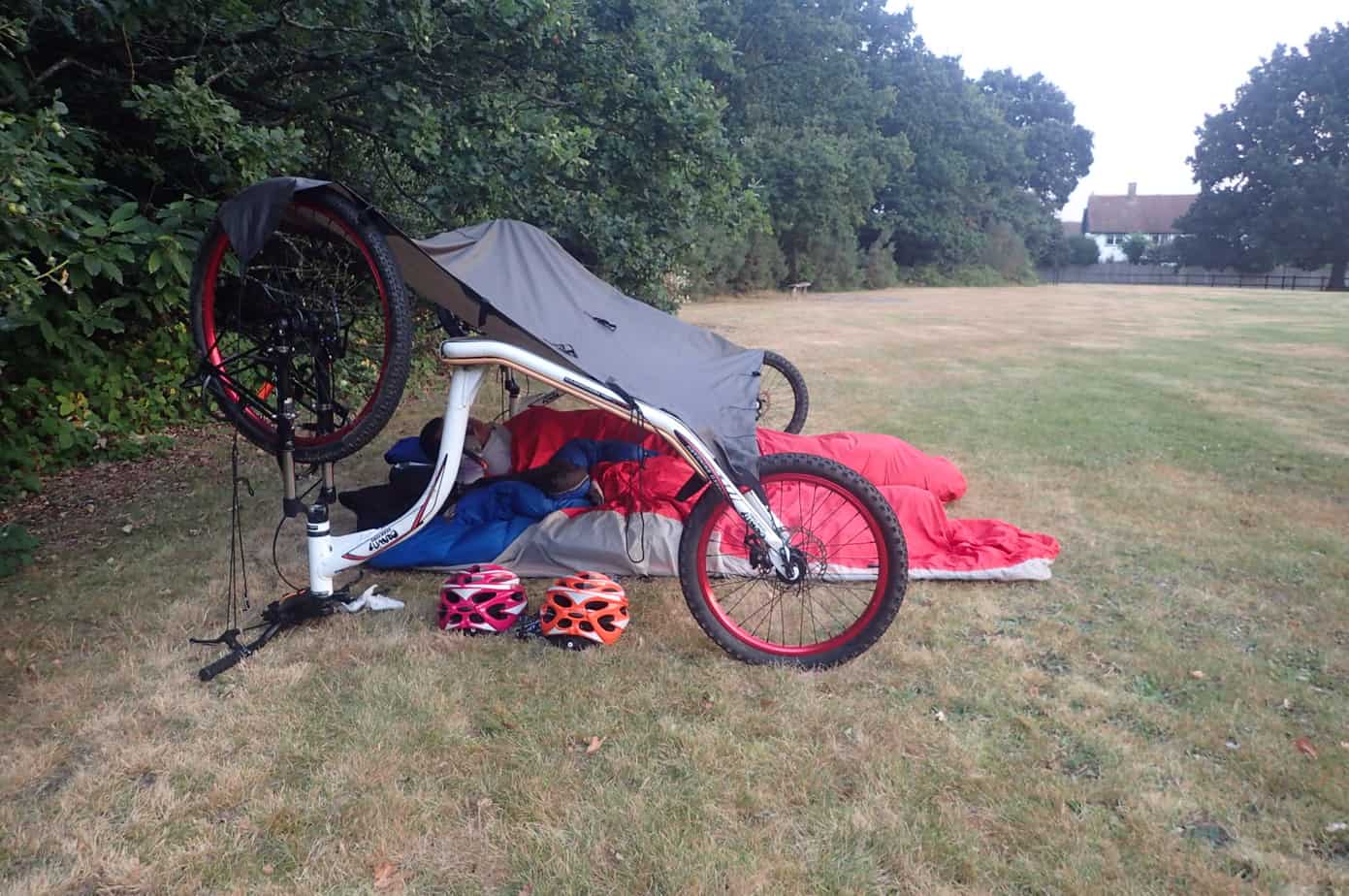 We got chatting to a young man in the park called Joe who had a go on our scooters and said that he now felt inspired to do his own challenge. Half an hour after leaving us, he turned up with some crisps, chocolate and a promise to sponsor us – such a sweet guy!

Despite being quite exposed, I felt really snug in our spot and the gentle patter of rain on our tarp lulled me to sleep. I woke up briefly at some point in the night when 3 teens almost walked into our set up. ‘What’s that’ I heard one of them whisper before quietly moving around us. They sat on a bench not far of us (despite there being 10 others in the park to choose from – it must be their regular spot), smoking a joint and talking about festivals and how mad they were with the Brexit vote.

There were no other disturbances and I woke up at 6.30am feeling refreshed after a solids night sleep. I peered under our tarp and could already see about 3 people looking our way a little confused. We packed down in super speedy time, partly because I actually helped Gil this morning and partly because it turns out we had camped in an ants nest and we could now see they were crawling all over us. 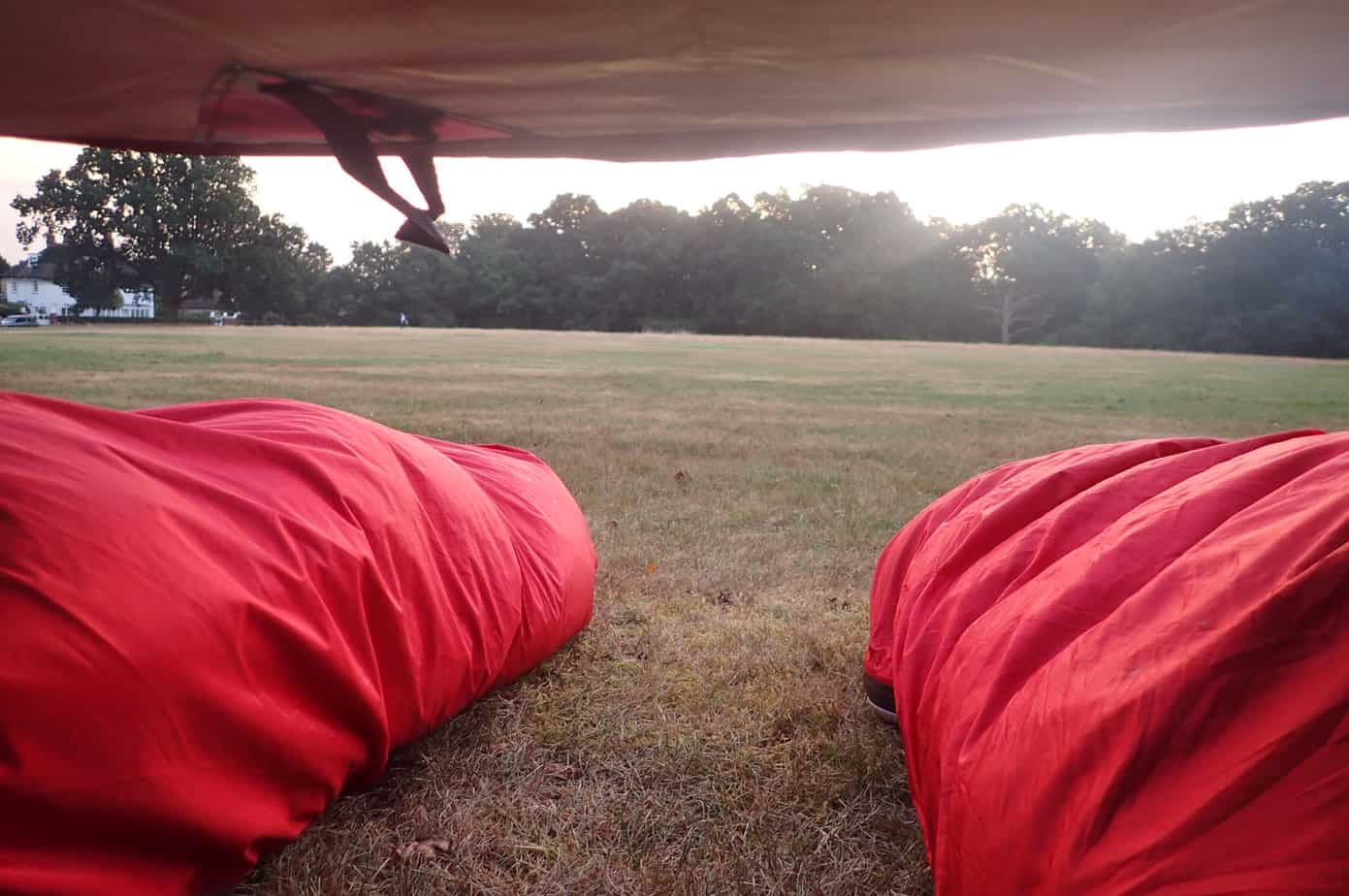 My legs have this deep achenes to them today that makes every push on the scooter an effort. I kick a bit with my left leg, then switch to my right, then pause for a bit before carrying on. It’s slow, but it is all progress. We stopped after 2 hours outside a Sainsburys where I ate a croissant, fruit and 2 chocolate bars for breakfast – I’m like a child sometimes. But if you can’t gorge on chocolate while scooting 150miles around London, then when can you?! 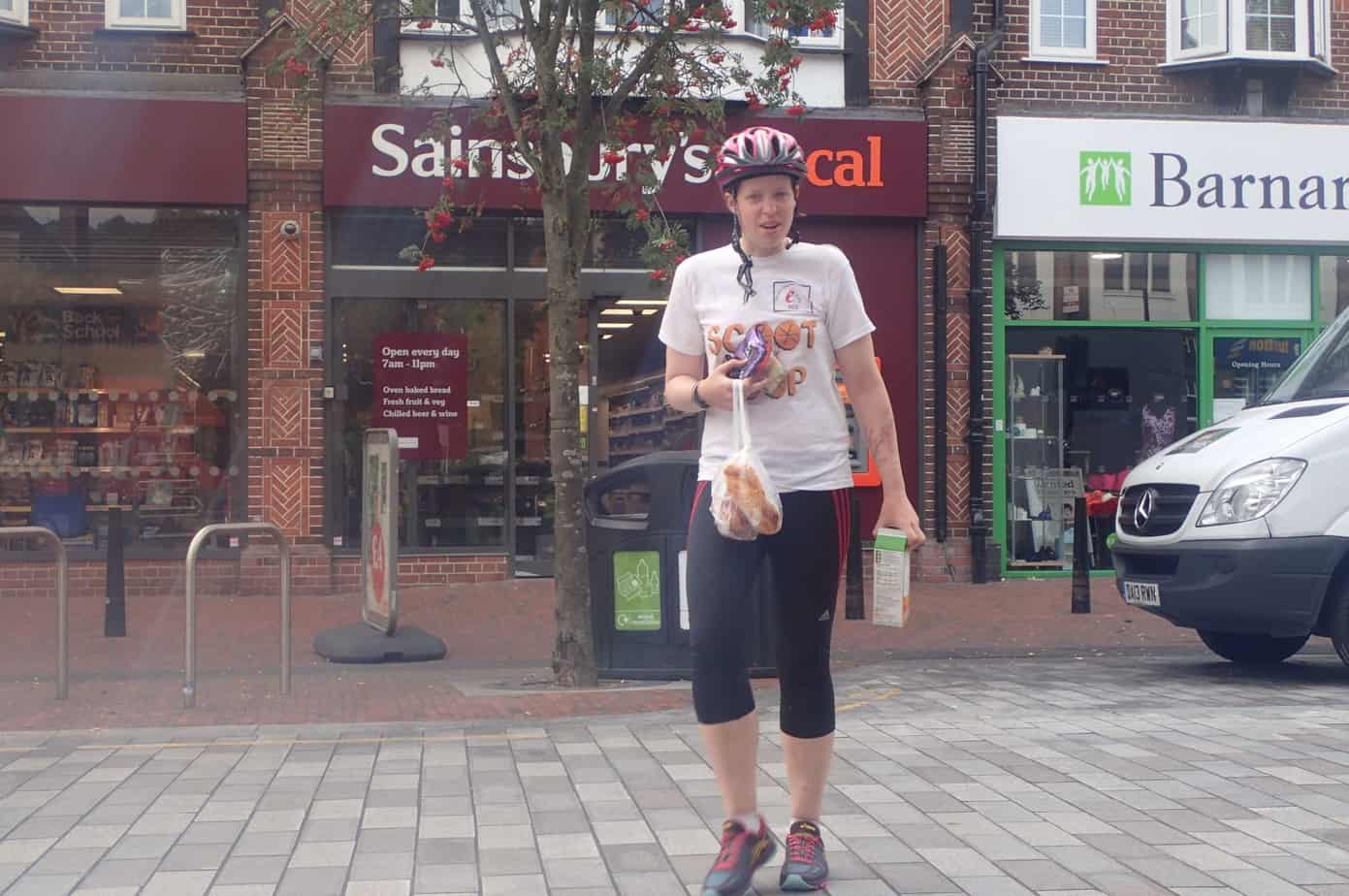 The trail led us along one of these overgrown sections with tons of stinging nettles. My face and legs are already itching like crazy from a ton of bites I got in the night. To add to that I now have tingly stinging on my legs, arms and even my neck. Gil tried pushing his scooter slowly through the tangle of nettles – I just kick my way through and get it done with quickly. 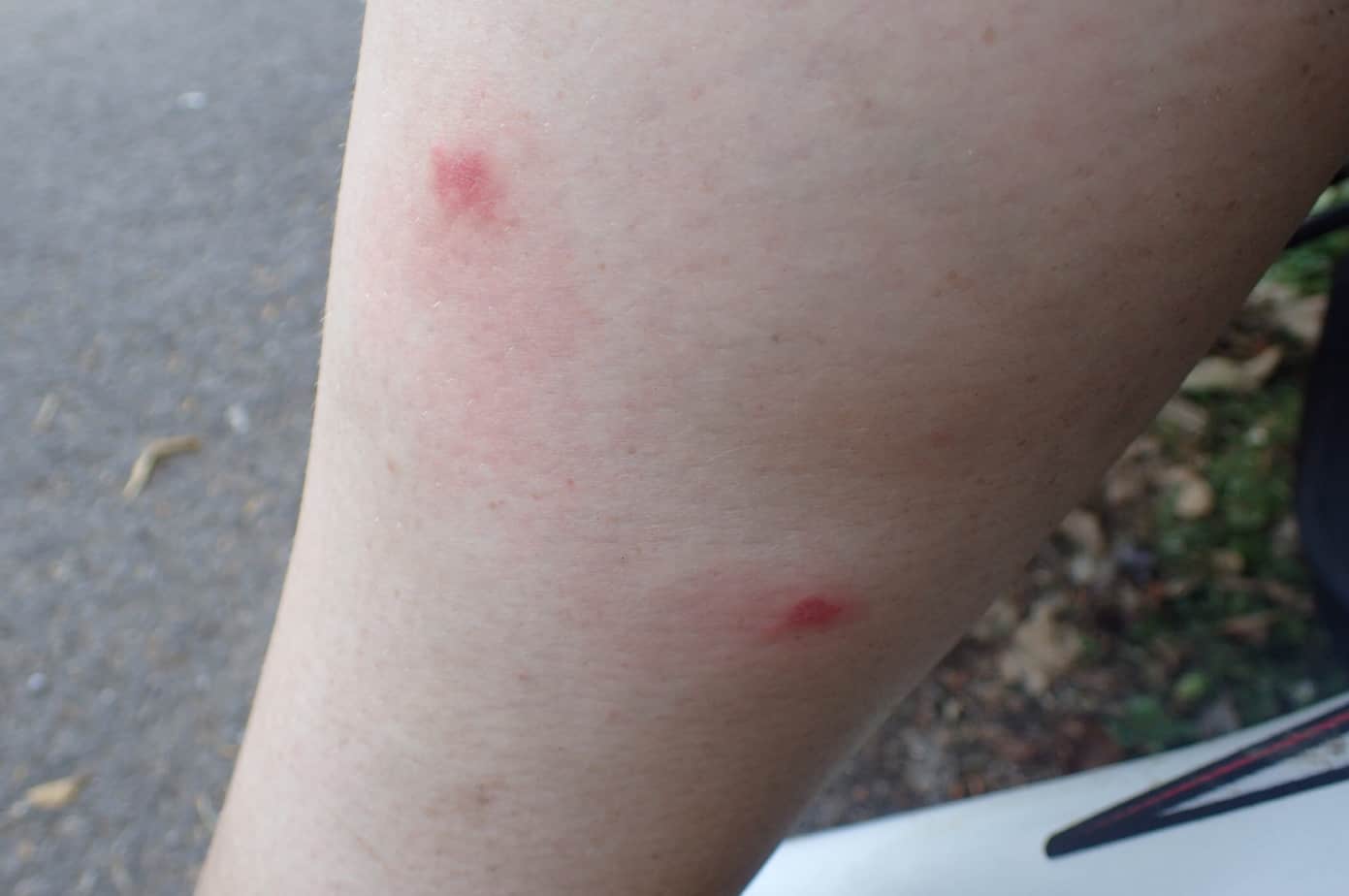 Gil yelled me back at one point and showed me the smallest sweetest little baby bird that he was worried he had run over. We gave it some water and it soon perked up so we moved it off the track and into shade. I think it’ll be ok. 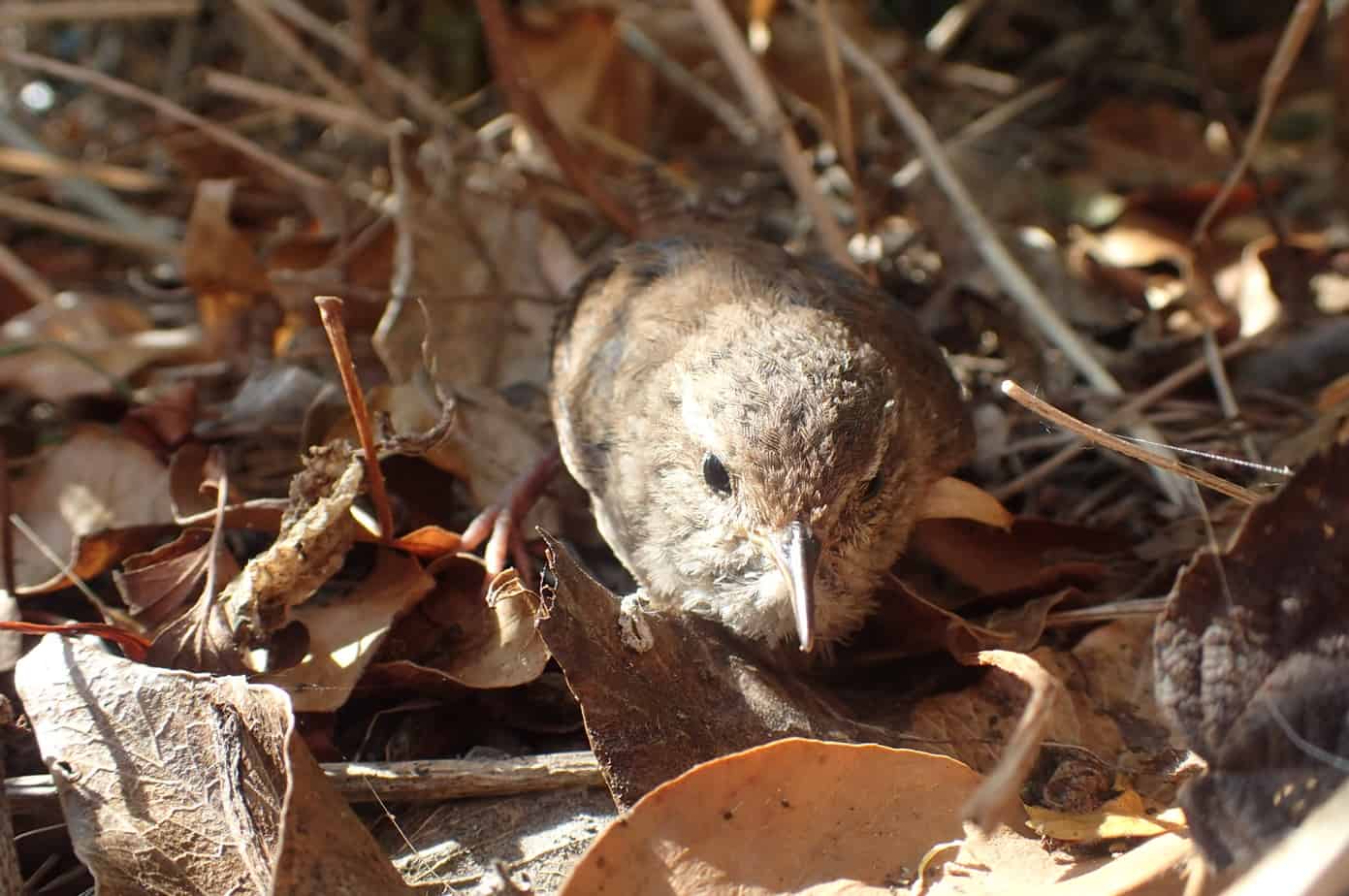 Coulsdon it turns out is the nicest area in London. Everyone was saying good morning to us, offering smiles and stopping to chat. A topless man filled up our water. This lady (who looked just like the farmers wife from Babe) got talking to us. She was such a character with a wicker hat on, tied with a thick ribbon with a large bow under her chin. She offered us directions which went on for about half an hour. We never actually asked for directions, we rarely do, but people like to give them anyway. I think they just like to help. 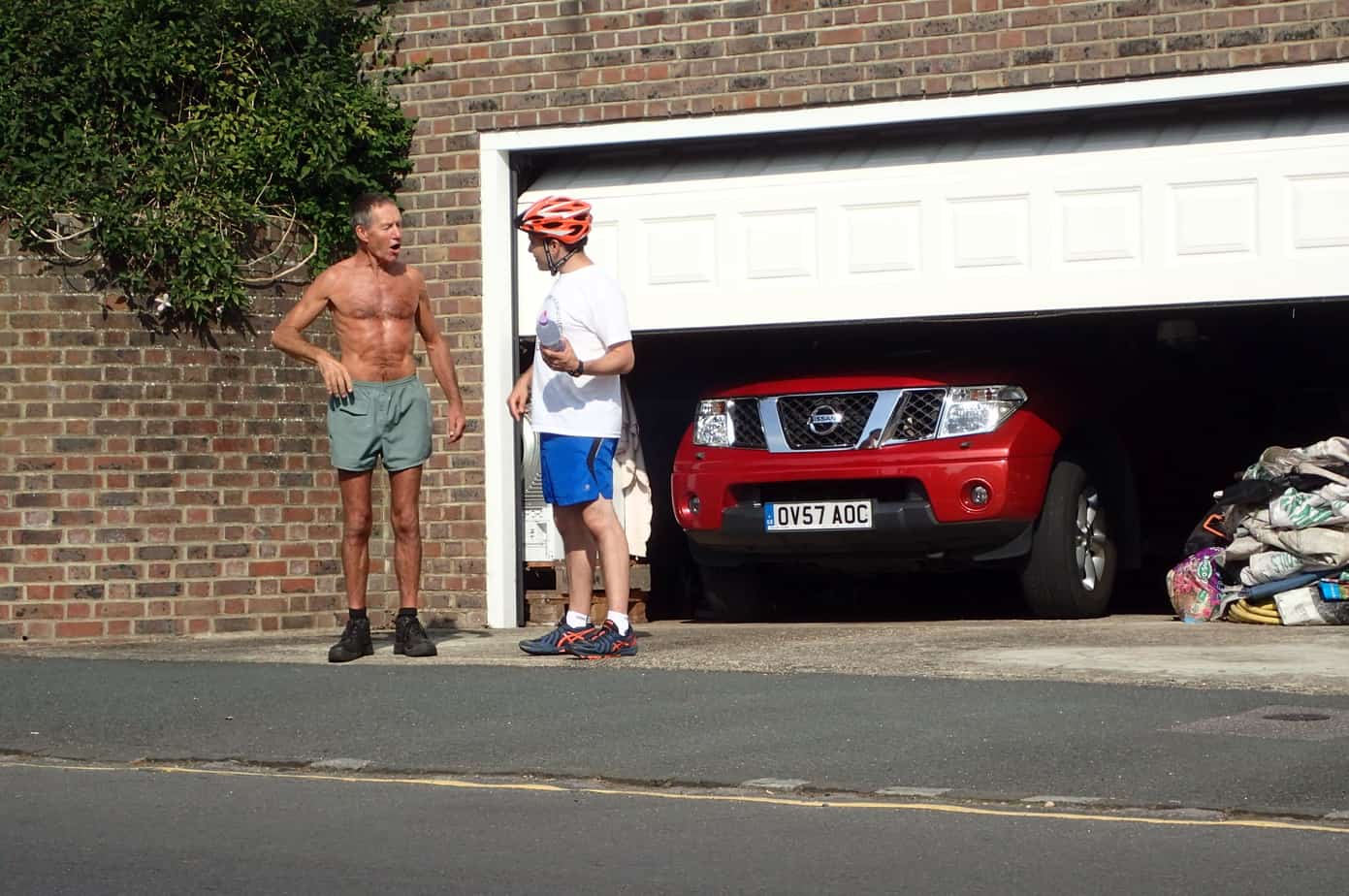 We ended up in a lush wooded area and, in classic London Loop style, got completely lost. Those damn signs!! Judging by their poor state and the overgrown paths, I’m starting to think we’re the first people ever to do this trail! We missed a crucial turning and, as the instructions said, kept going straight, for about an hour, until we ended up right back where we started! The second time attempting this route, we found the worn sign hidden behind some shrubbery – we had no chance. 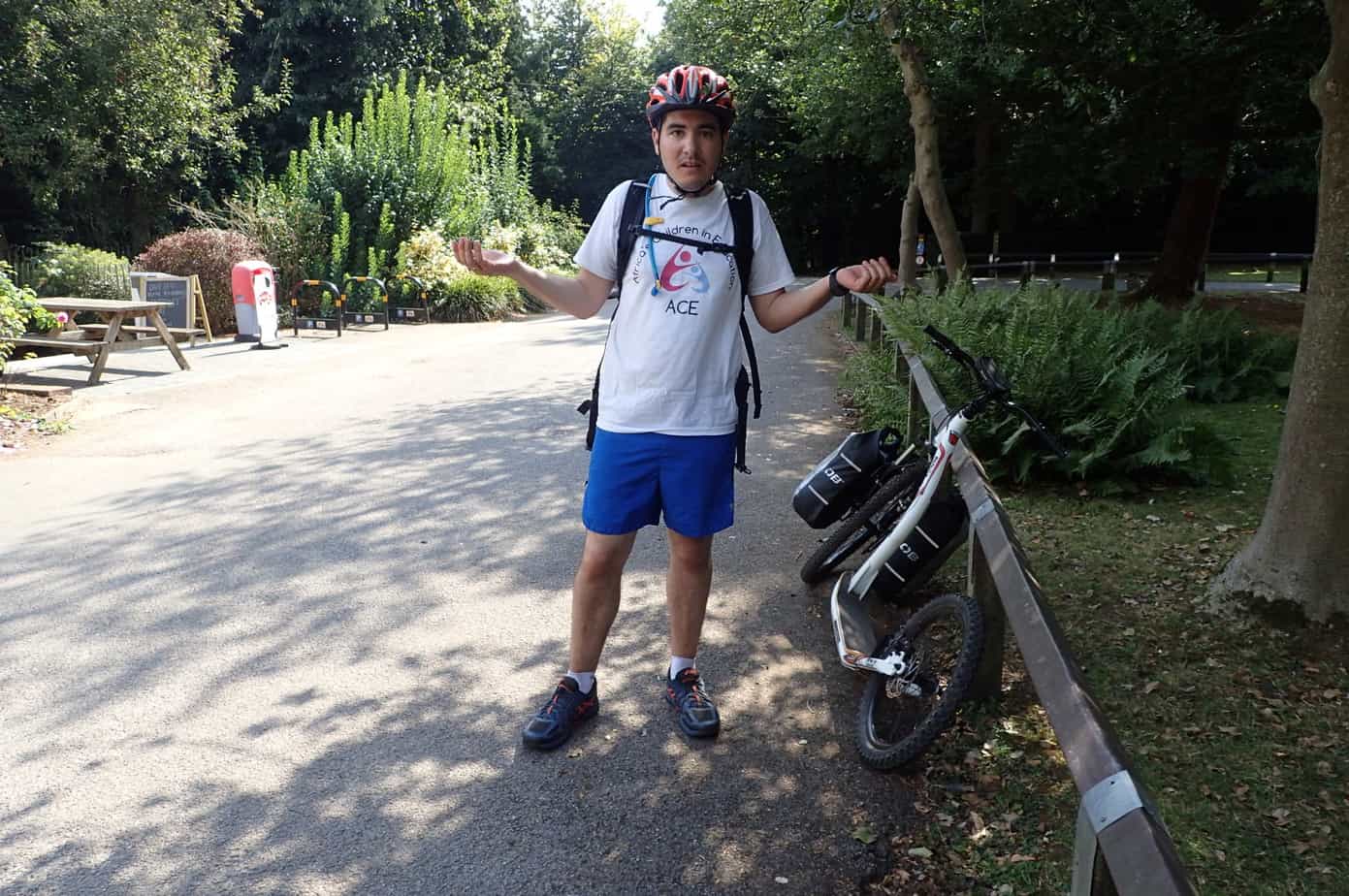 Gil is providing great entertainment for me at the moment as he has chaffing issues and is walking like John Wayne. I haven’t looked in a mirror for a while but I imagine my 4 day helmet hair is probably very laughable, but, as I can’t see myself, Gil will have to remain the butt of my jokes for now.

This is Gil pointing out a dear to me that turned out to be a dog: 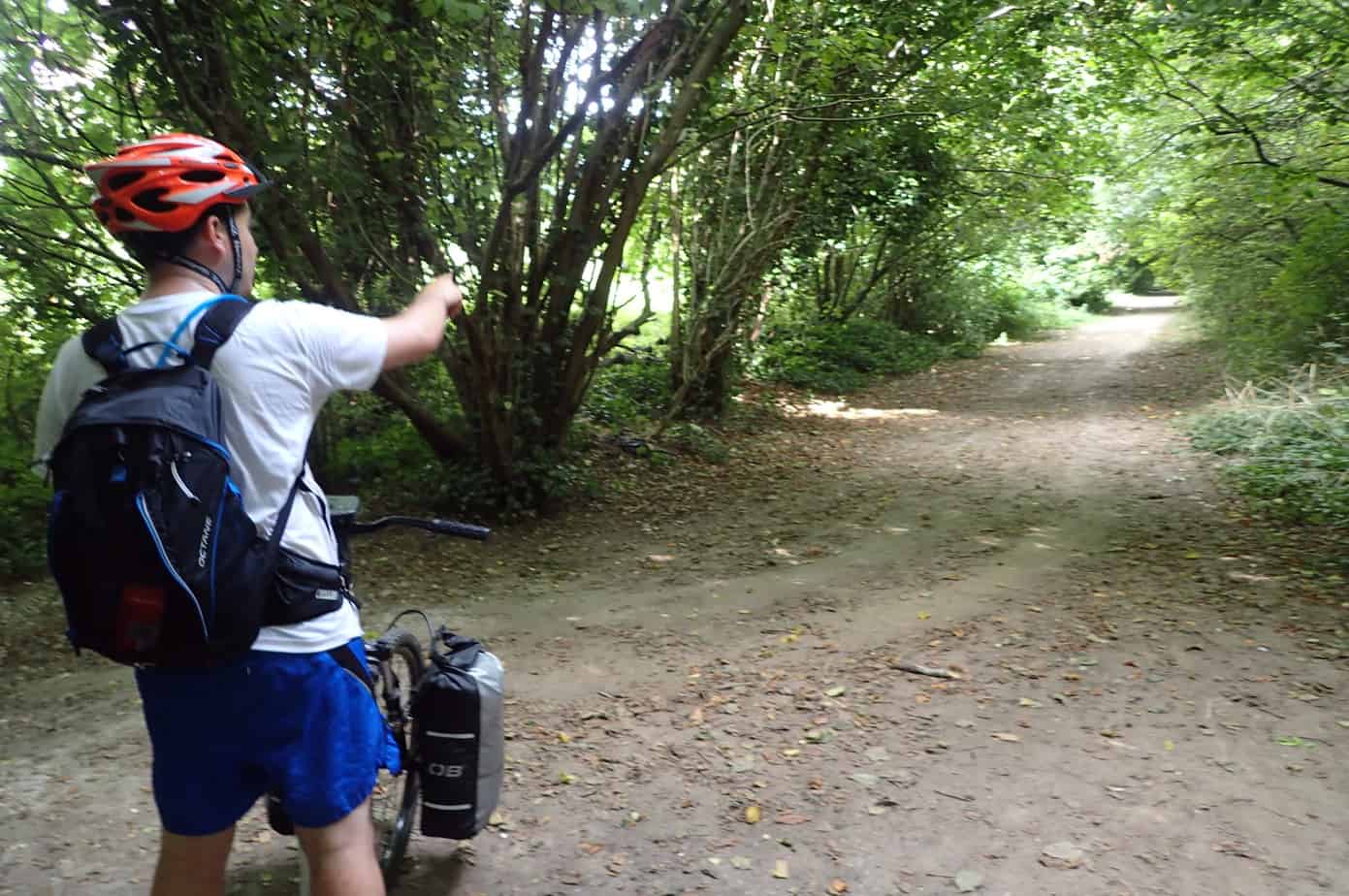 We stopped for a drink in a pub and to charge our phones for if (or rather when) we get lost next. A good 15 miles down already today, we’re doing good. It’s thirsty work this scooting! 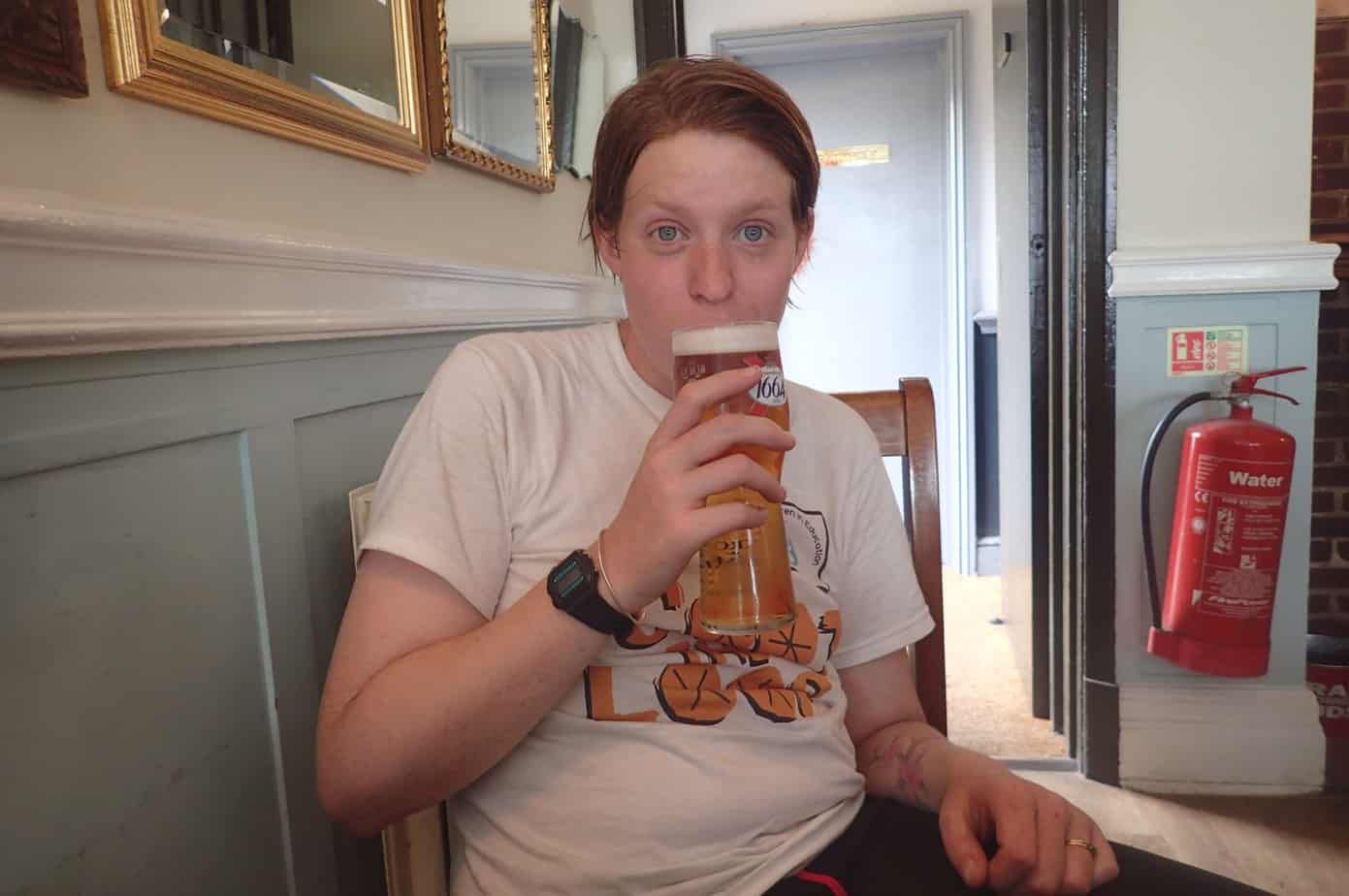 Keep following our Scoot the loop: we finished!