Catch up on my previous daily installments: Travel day, Day 1 and Day 2.

I woke up feeling really sore. Mostly the muscles in my leg and back but also my skin from the heat rash. It hurt a lot and had kept me up most of the night. I was now super tired from 2 sleepless nights.

Whenever I feel like this I try not to think about the day ahead and instead focus on the tasks at hand – getting changed, getting my boots on and packing down my tent. Looking at the bigger picture just makes it too daunting. I grabbed a handful of trail mix and a flapjack (which Cal had made) for breakfast before we set off. 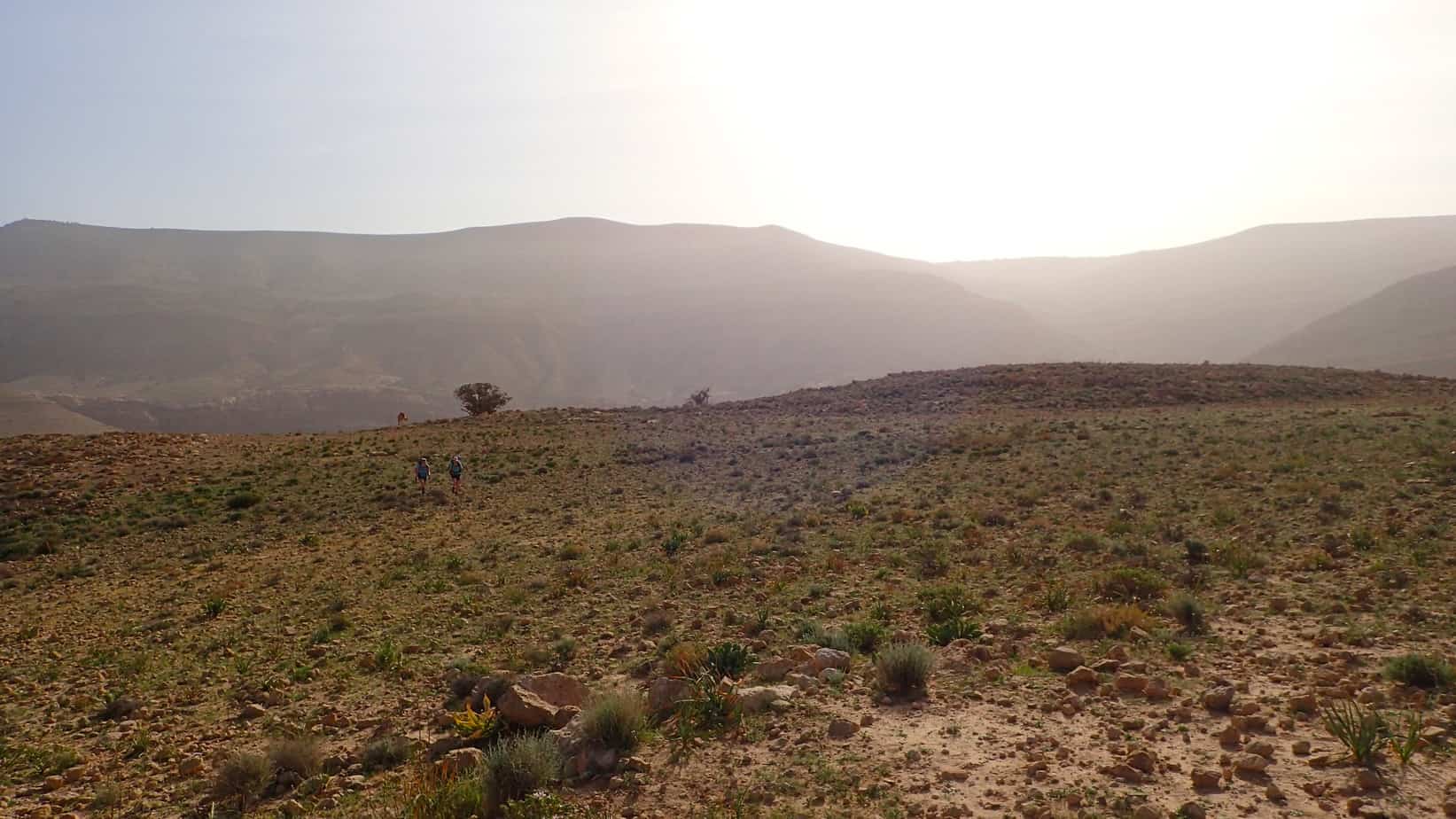 Trying not to be too bossy

The day started cool but by 9am the sun was beating down on us. We took a few wrong turns today which delayed our progress and meant we had to trailblaze around a mountain to rejoin the track. Trailblazing can be fun but it takes a lot longer than following a track.

I have a tendency to try to take over rather than let people make mistakes, I literally can’t stop myself sometimes. Aware that I didn’t want to become too bossy I plugged in my music and hung back. 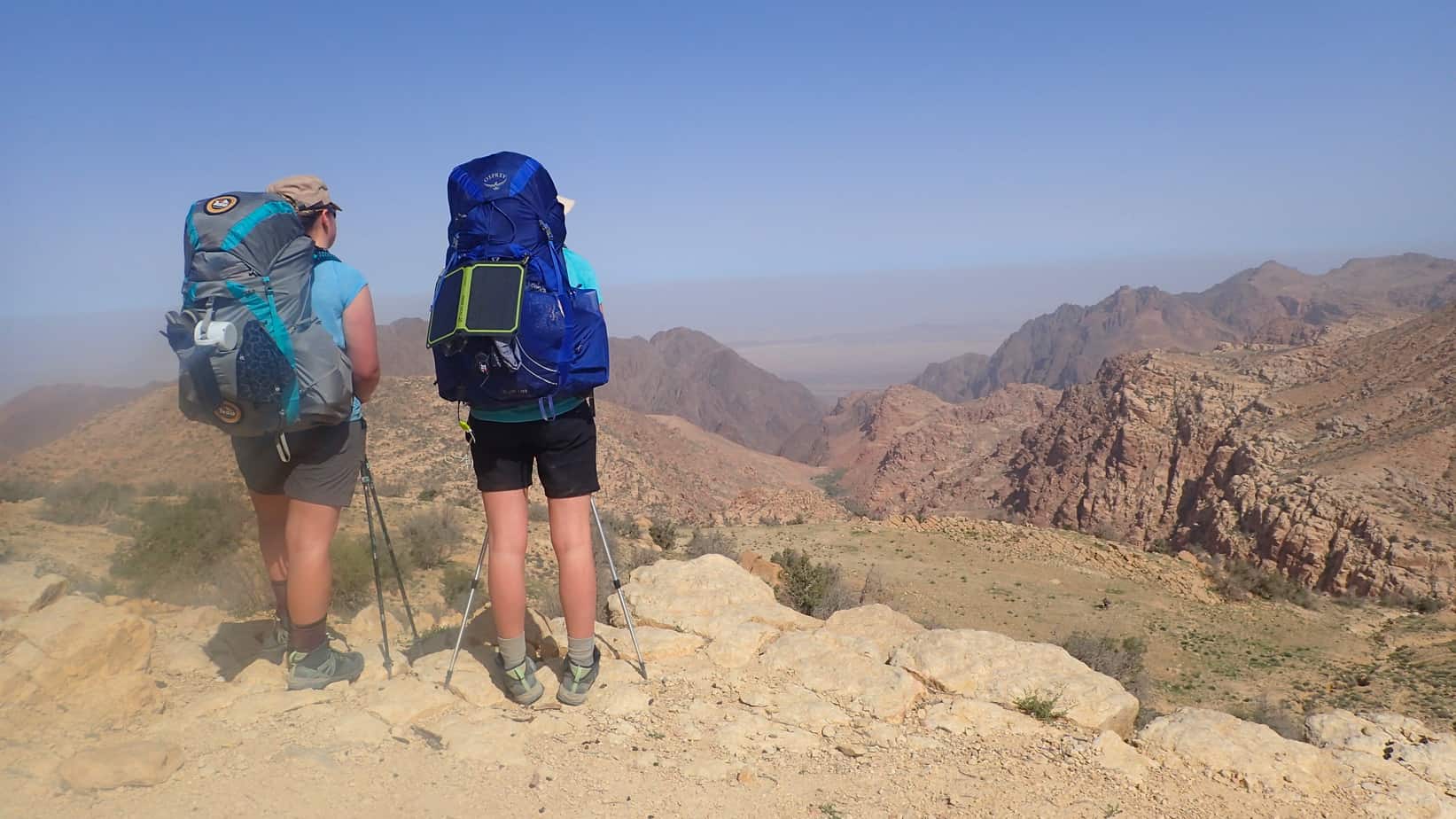 Listen to a few tunes really lifted my spirits and I was enjoying the amazing scenery. It was absolutely stunning. We even saw our first camels!

Right in the hottest part of the day though we made another error and had a tough climb to get back up a canyon. It was a brutal climb to rejoin the trail we were meant to be on. I had a feeling we were going wrong but didn’t say anything….now I was kicking myself! It’s impossible to get a balance sometimes.

At the top Alda suddenly appeared with his usual eagerness. He had binoculars in his hands….a whole new level of babysitting!! He walked us to the end of the track where he had enough water supply to last us the rest of that day and the next. It meant we’d be carrying a good 6-7 liters each now for the rest of the day. 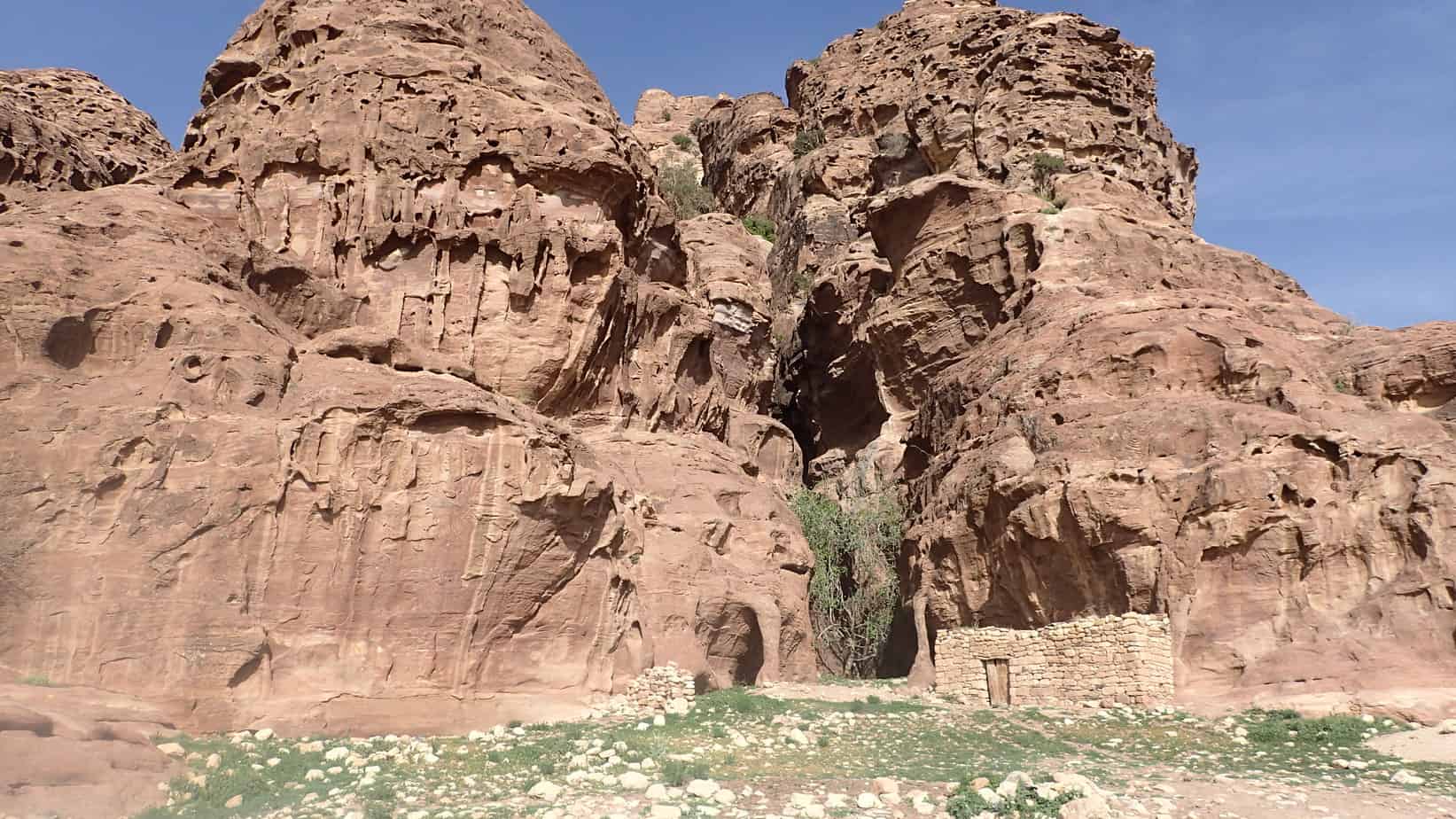 It was time to call Mohamad, the guy who was organising our water drops. We wanted him to understand that we didn’t want to be guided but also to ask for a rest day in Petra. Mollie’s feet were in a really bad way and she needed to rest them. Cal was also struggling to keep her energy levels up and her hip was bothering her and both of them said they’d be happy for a rest day.

My body was sore and my heat rash painful but energy-wise I was doing good. It really surprised me how quickly I had taken to the walk. It’s well over a year since hiking Israel but something from that trip still remains in my body. It’s not just the hiking with a heavy bag but also being accustomed to the heat, dust and blunt middle eastern culture….that can sure takes it out of you! I was happy to take a rest day though if it was best for the team and thought we could use it to check out Petra.

The call with Mohamad was reaaaally infuriating. I found him whiny and rude! He said we couldn’t take a rest day and if we didn’t like the way he was doing the water drops we could leave. Great….except he insisted we pay everything up front so we would lose all our money. What a rat!

Thinking we weren’t going to make it

We filled up our water containers with the water Alda had brought us and set off on our own. We still had a good 9km to walk and I could see on both Cal and Mollies faces that they didn’t think they could do it. It’s a problem in the desert because we are so dictated by water sources that we can’t afford to not reach our daily goals. But neither of them complained. They both showed steely determination, got their heads down and got on with it.

A local boy brought Cal a kid to cuddle at one of our rest spots….just what she needed! 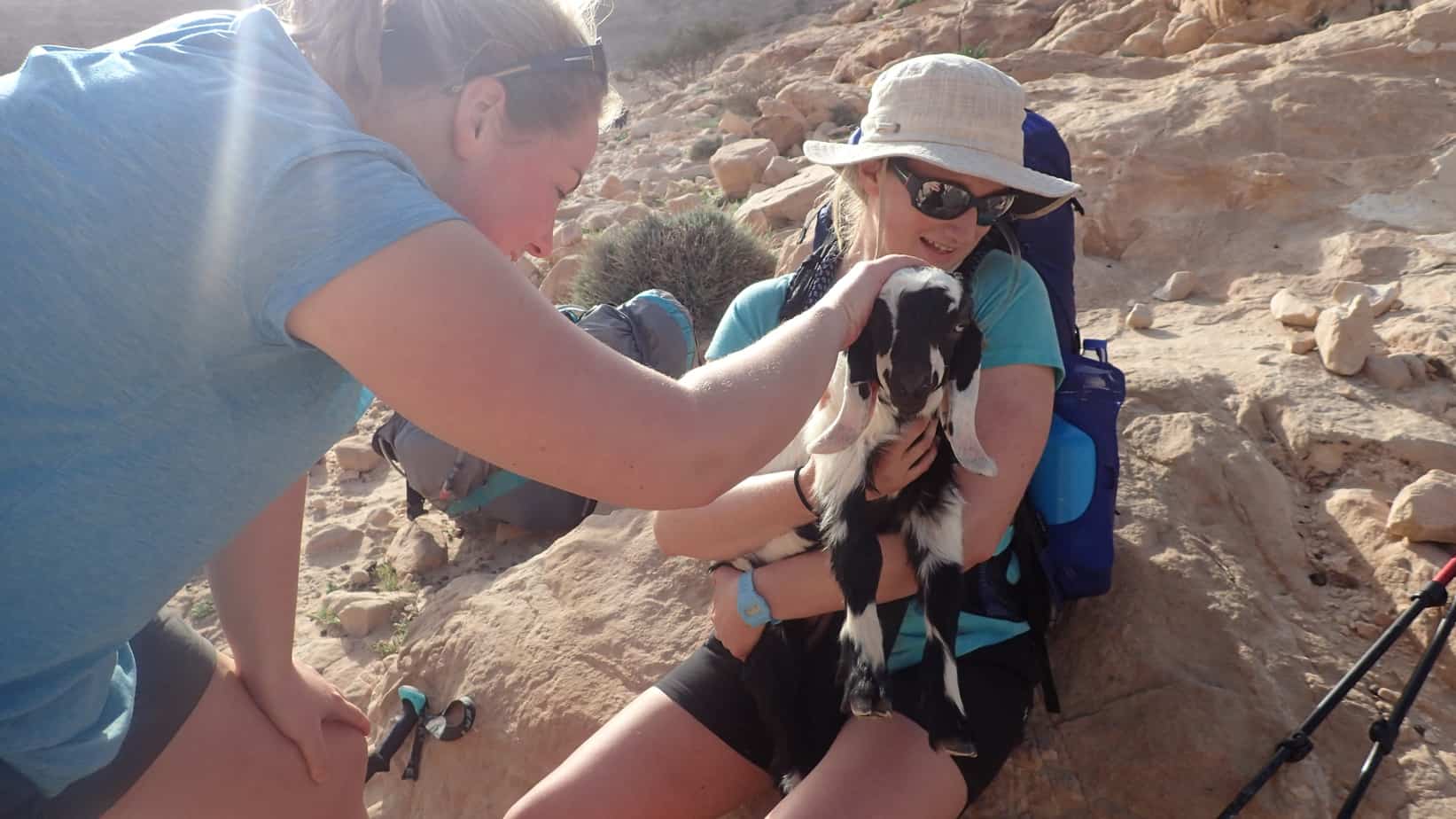 We meandered through Bedouin farms and then over gentle hills. Every Beduion tent seems to have a guard dog and they are a real problem. They charge at us growling, teeth bared. It can be pretty scary although thankfully none have got too close yet. 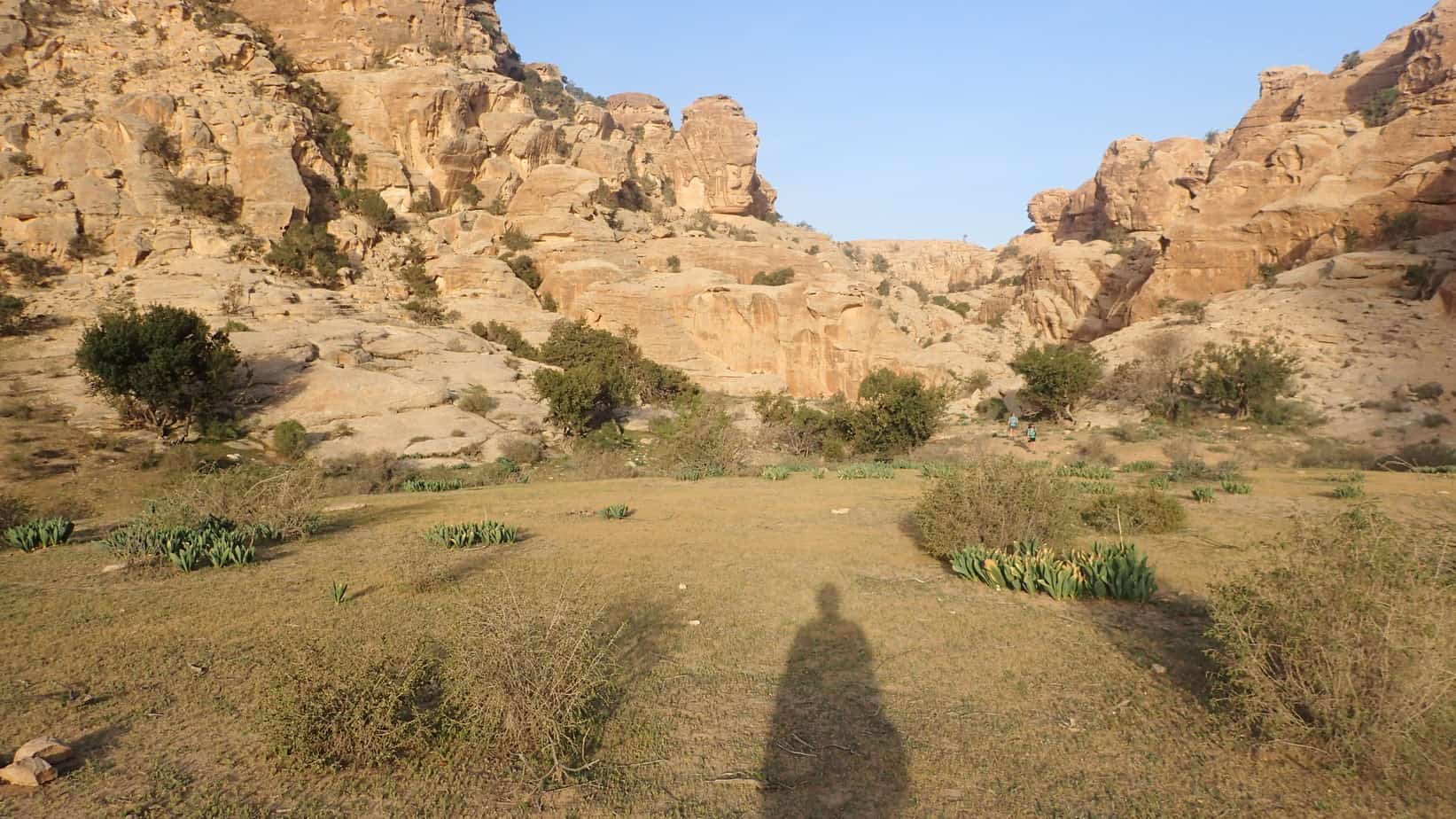 Cal and Mollie gave it everything they had for the last 1km. It had been an afternoon of silence and everyone was relieved to finally get to camp. We’d been hiking for 11 and a half hours.

Our camp spot was beautiful and remote. I was so happy to be alone and away from people….I finally got that quiet stillness I had been craving! 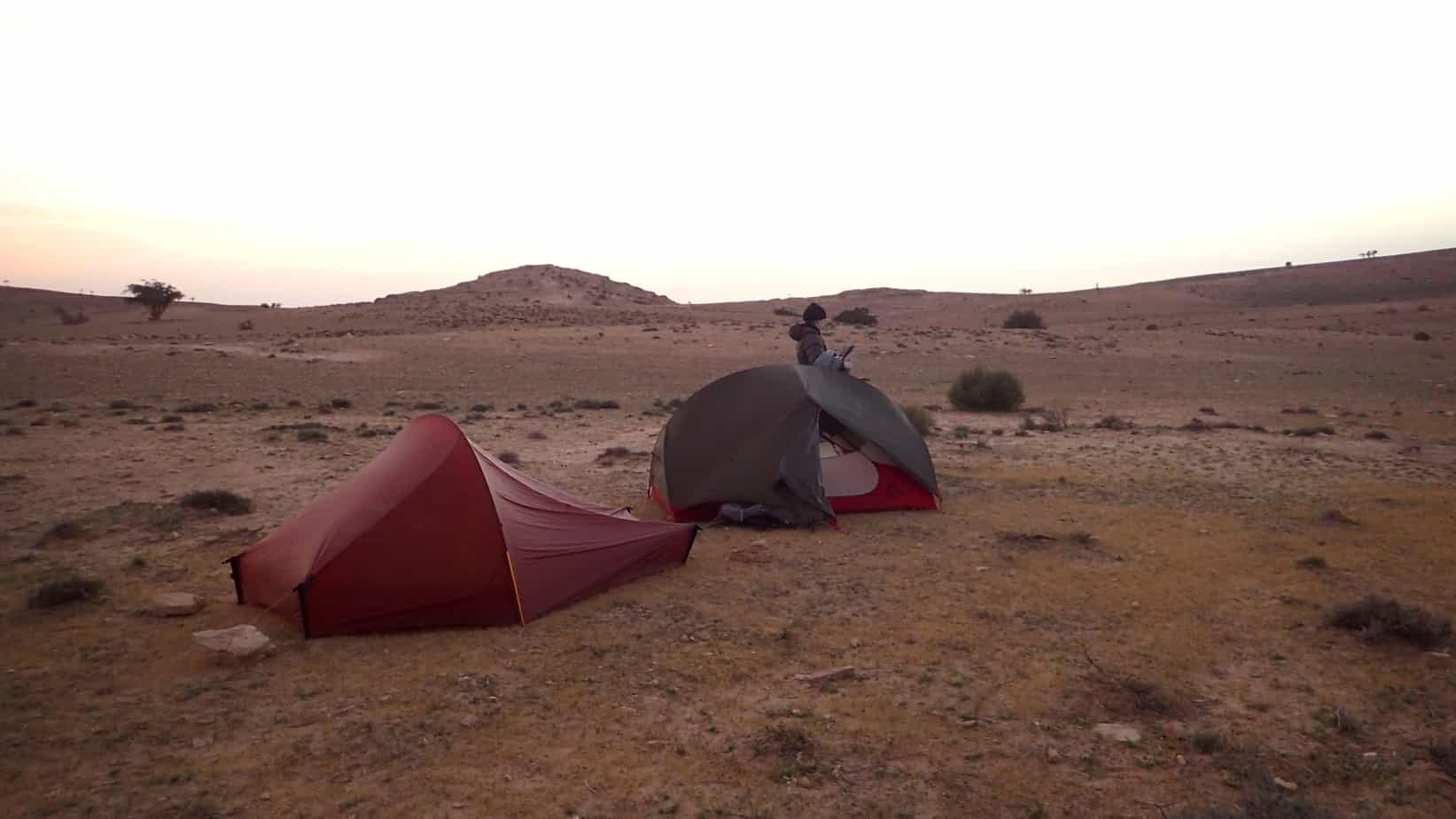 We got the tents up just as the sun was setting, got the water boiling quickly and all scoffed our dinners. Soon after any stresses, tensions and hardships from the day dissolved. It’s amazing what a bit of food a rest can do to heal.

I’m feeling positive about tomorrow. We’ve got a slightly shorter day and will reach Petra where we will get a bit of a respite as we are staying in a hotel. I hope the thought of a shower and bed will motivate us to push on and get there early. I’m also super excited to see Petra and it’s so satisfying that while 99% of visitors turn up in buses, we would’ve trekked across the desert to reach it.