I couldn’t believe it. Here I was…..about to swim with the gigantic Mafia Island Whale Sharks!

‘Jump, jump’ the captain yelled at us and the 4 other tourists that were on the traditional dhow boat. I put my mask on and ungraciously stuck my legs over the side, fins attached. I looked down at the dark blue water below apprehensively. This was the moment I had flown all the way to Mafia Island for. To have a chance to swim with whale sharks on Mafia Island – the world’s largest fish.

No time for hesitation now. I pushed lowered myself off the boat into the water. Trying not to splash so I didn’t scare the shark away. 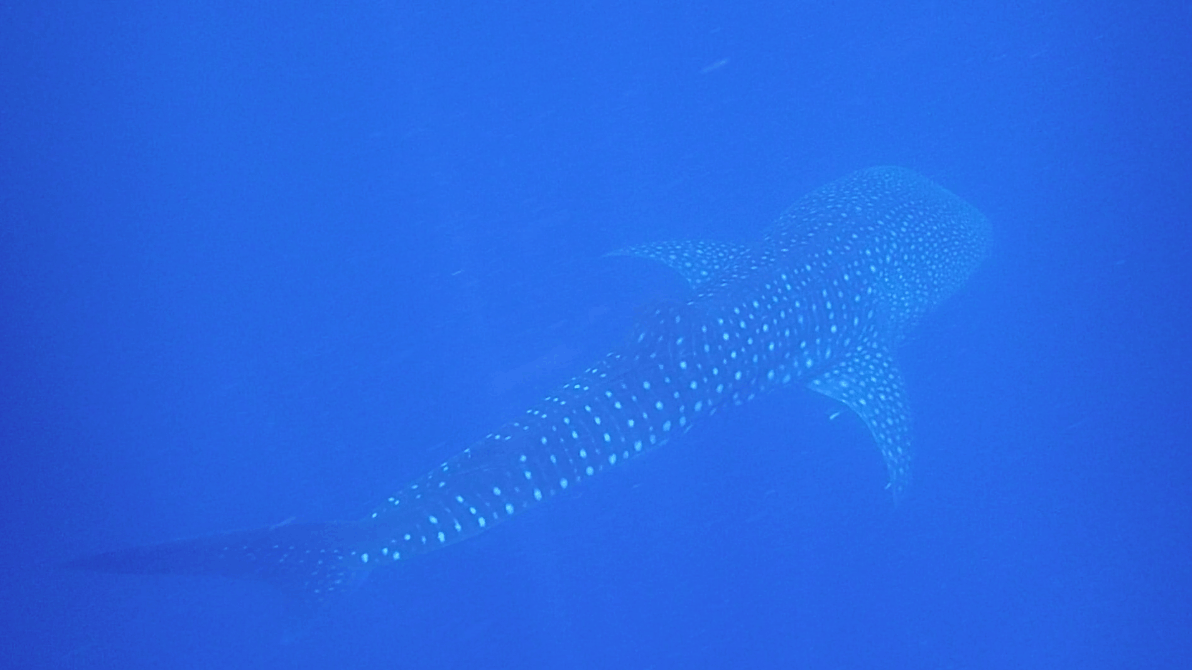 Mafia is the less known neighbour of Tanzania’s popular island, Zanzibar. Unlike Zanzibar, which is fully equipped for (and overrun with) tourists, Mafia is still relatively untouched. Despite the lovable laid-back locals, the beautiful palm tree beaches and vibrant reefs, the place was void of tourists.

Note that the island is still very cut off so life there is basic. For me, this was all part of the charm.

Those who do venture there, usually come in search of an encounter swimming with whale sharks who migrate to the area each year between October and February. 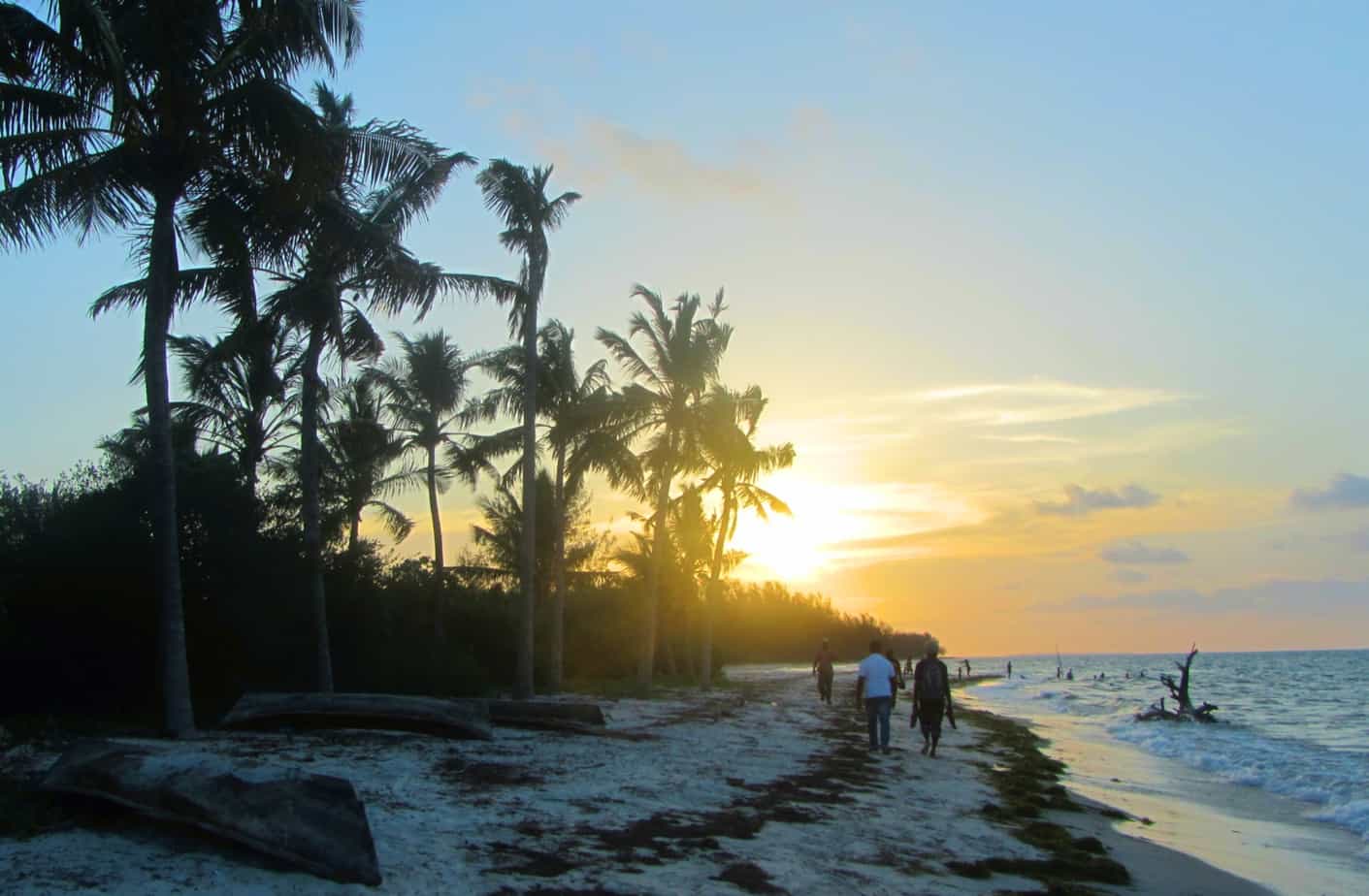 After doing a lot of research, we decided to go with Afro Whale Shark Safari Mafia Island…..why? It was easy to book. We sent them an email in advance. Once on the island, we realised this wasn’t necessary. We just asked out hotel to call them the night before if we wanted to do a whale shark tour the next day. Mafia Island doesn’t do planning!

We were collected by tuk-tuk from where we were staying in Bustani lodge and taken to Afro Beach Bungalows which is on a secluded and beautiful stretch of beach.

Need somewhere to stay? I can really recommend Bustani lodge. Great value hotel for the level of luxury you get and one of the few places on the island with a pool. For budget option, I’d suggest Whale Shark Lodge

We were kitted out with a mask, snorkel and fins and given a briefing. As we had been warned when booking, there is no guarantee of seeing the sharks, they are wild animals after all. As someone who has been on 6 dolphin tours without ever spotting a wild dolphin, I didn’t get my hopes up!

Afro’s team were a little shy but very friendly and happy to answer our questions. 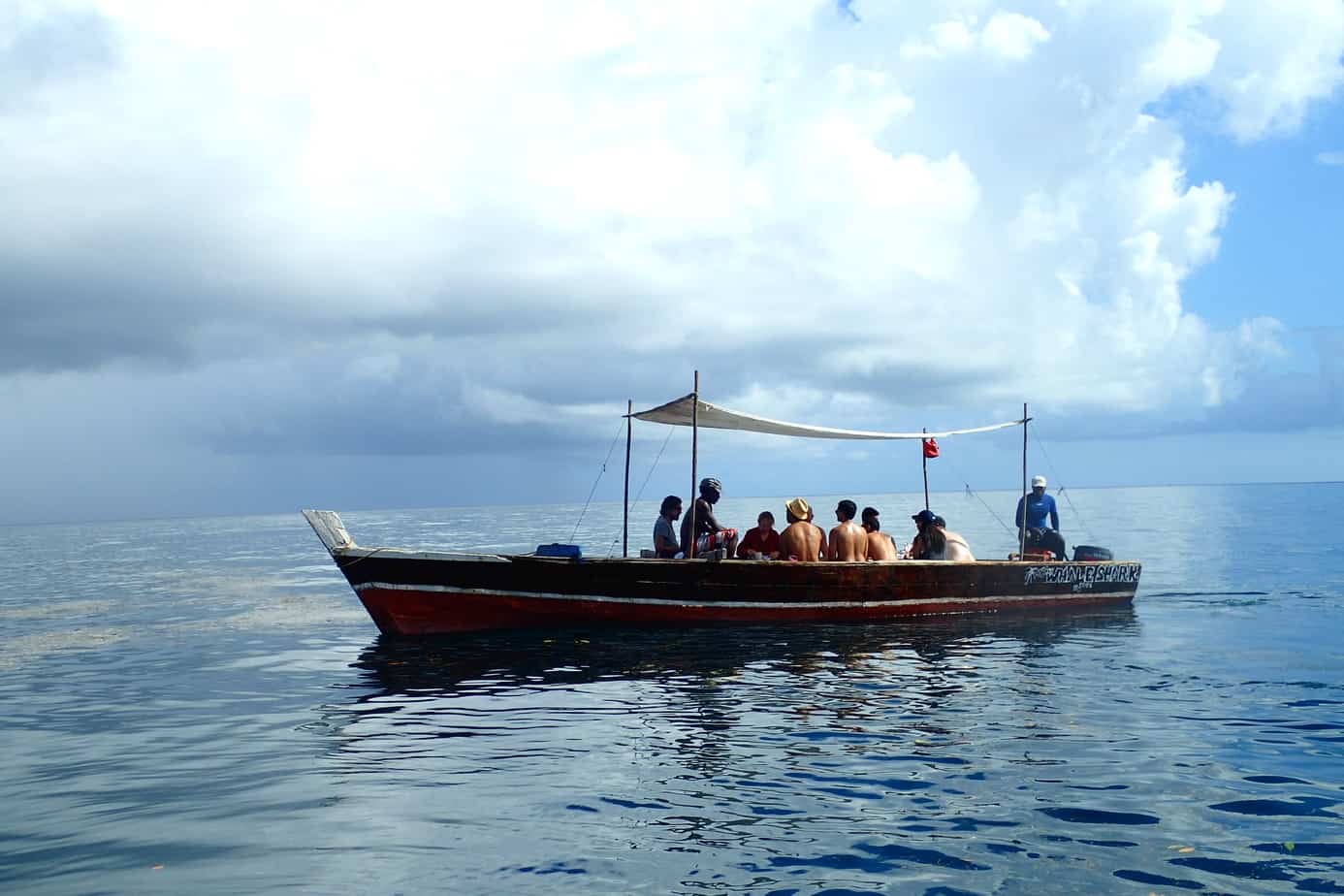 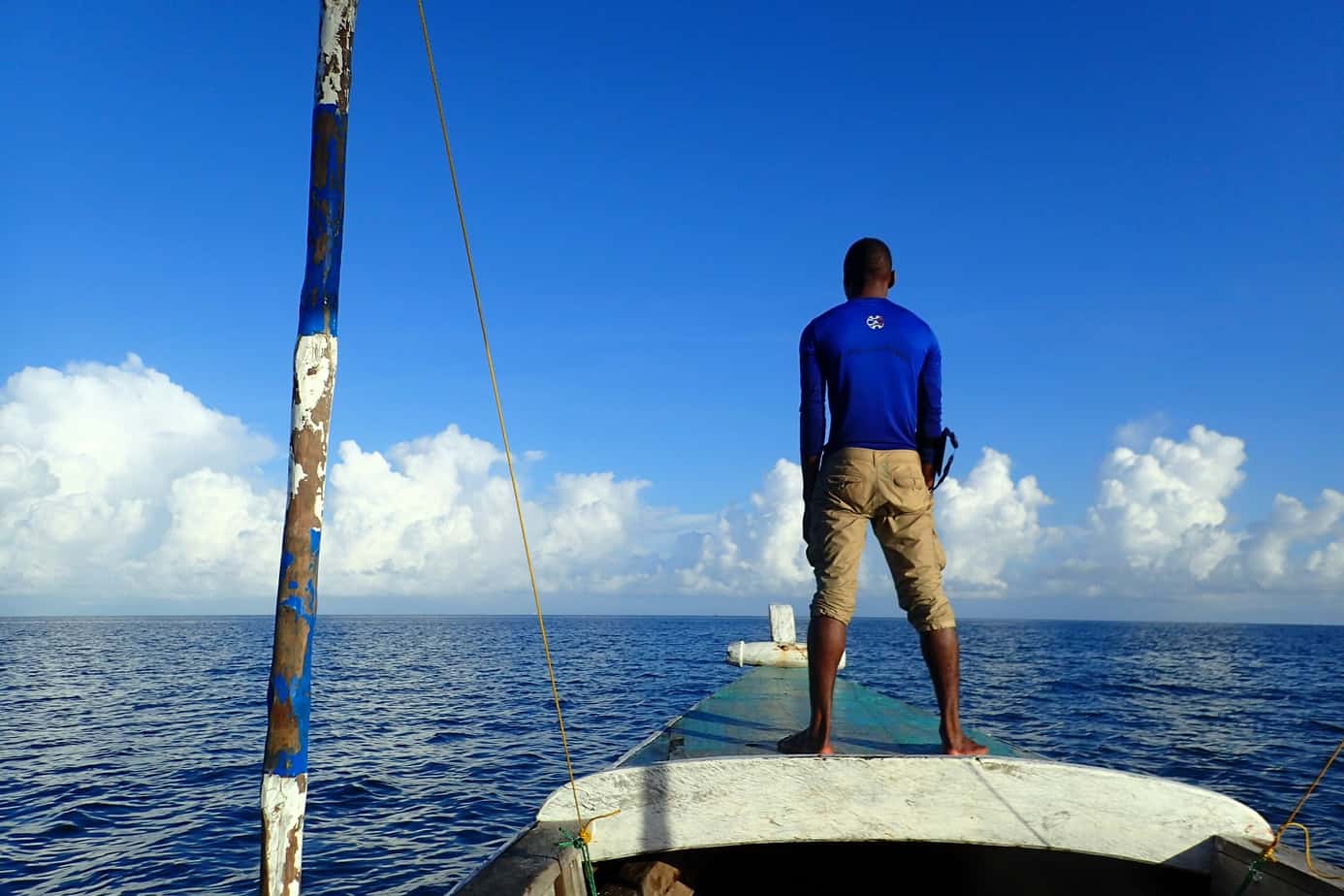 It took less than half an hour before Afro’s team were able to spot a whale shark in the water.

I saw a flash of a large fin break the surface not far from where we were. A classic Jaws moment! The engine was cut off and we were instructed to jump in. 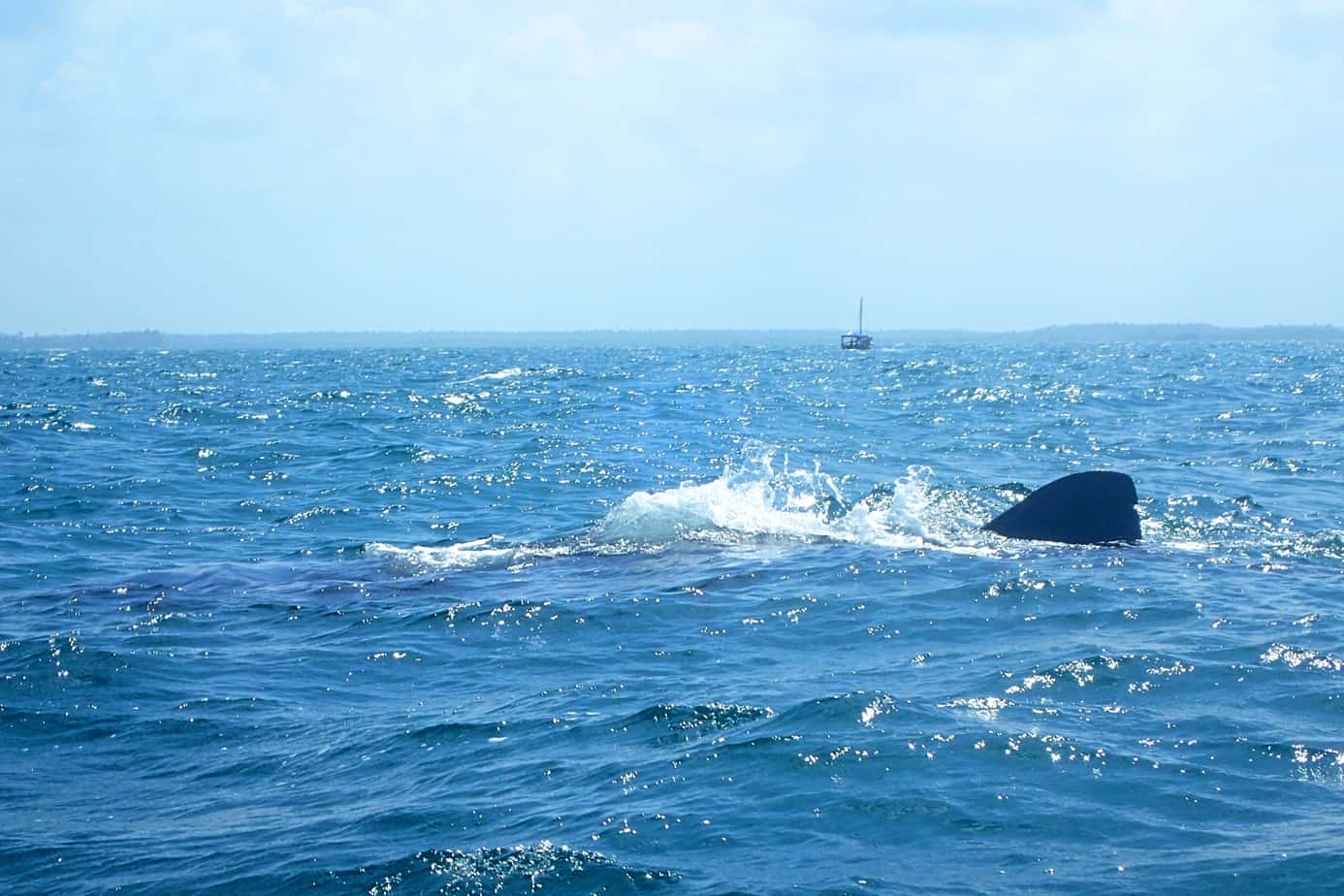 In the water, Gil grabbed my arm and pointed at something below me. Coming from the depths was the dark shadow of a Whale Shark. I heard my breath quicken and felt the goosebumps go up on my arms. 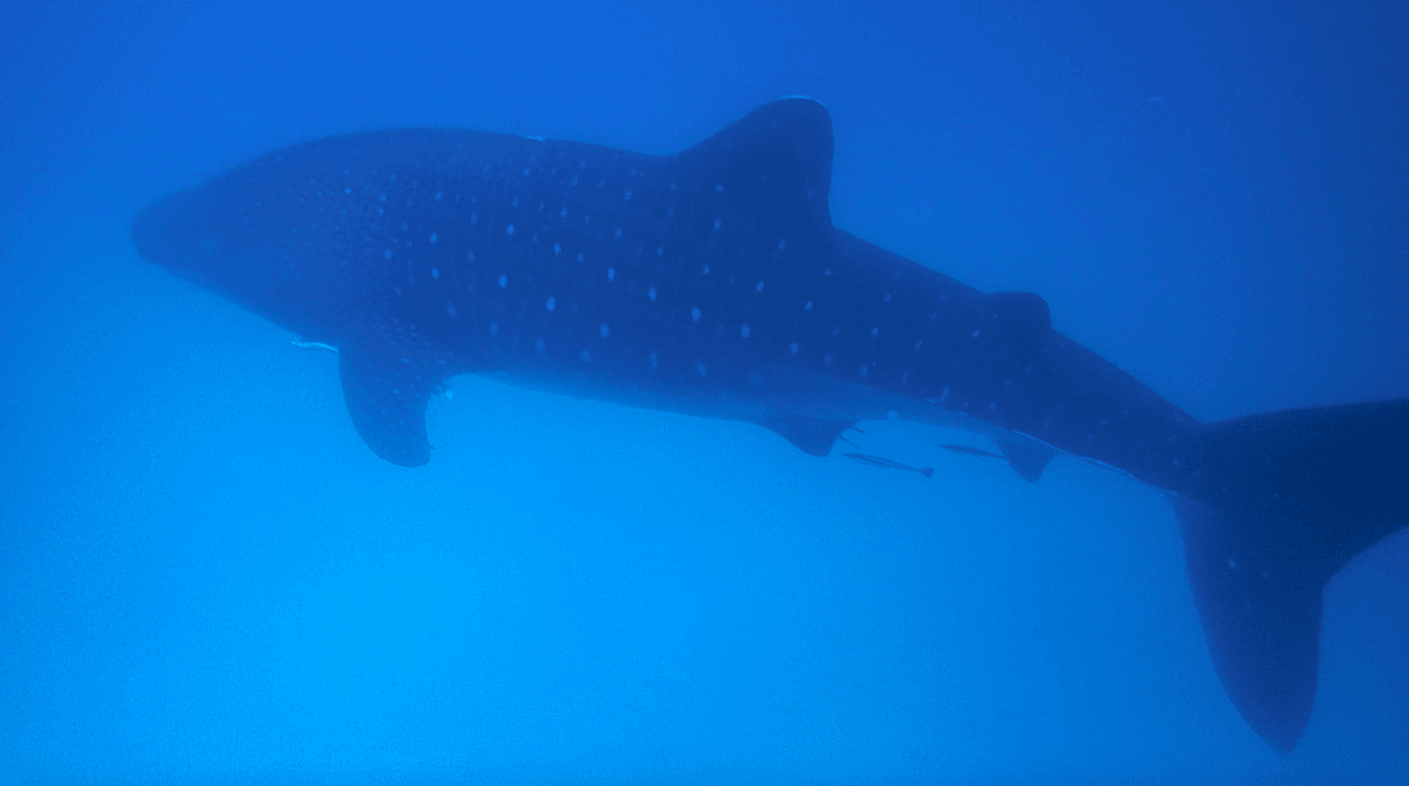 The shark was moving slowly but at surprising speed, right towards us. It wasn’t until it was by us (it literally came within a couple of metres) that I could truly take in its awesome size. 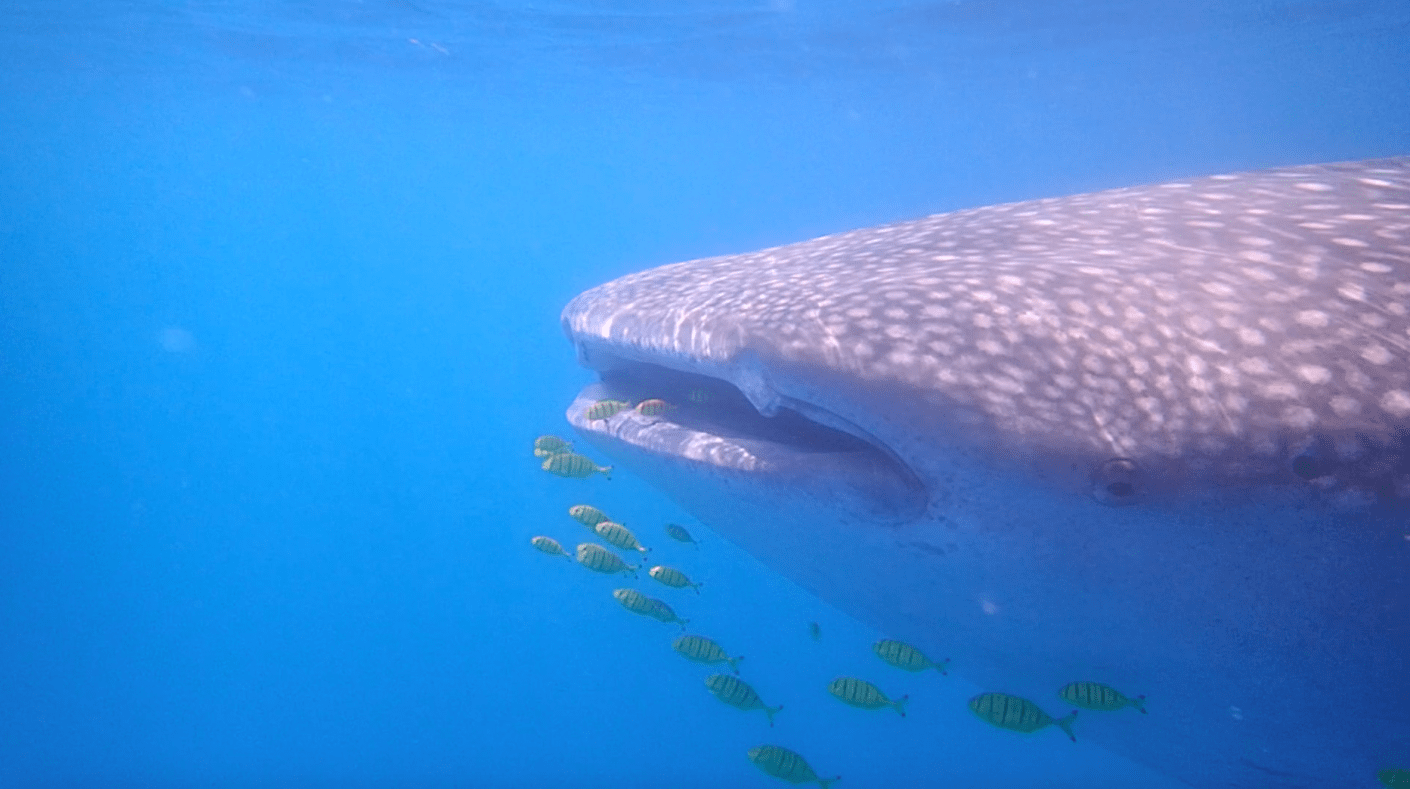 Each time we got tired, we would get back on the boat and Afro and his team would line us up again with the shark so we could jump back in. There was no pressure or rush so we could jump as many times as we liked. After an hour we were all tired and unanimously agreed we were happy to head back.

Afro passed round some snacks (much appreciated as after all the swimming and adrenaline we were hungry) and we all sat soaking up the sun grinning ear to ear.

What an epic experience!

Not happy with doing it just once!

In the short time that we had been on the island, we already felt that we had become good friends with Afro and his team.  They also organised a number of other trips for us (at a discount as we had already done the shark tour with them) including visiting the marine park for snorkeling and a BBQ on a secluded sandbank. They also arranged for us to join a local night party on the beach to celebrate New Year’s Eve.

It was a memorable day to say goodbye to what had been a great year. It seemed fitting that the new year should start with a bang, there was only one thing I could think of doing…..Mafis Island whale shark safari, take 2!

In fact, we ended up doing the tour 4 times. It was worth it and each time offered a different experience.

Insurance for swimming with Whale Sharks

Make sure you have good insurance that covers you for open water swimming. Although Mafia Island has a hospital, the island is remote. It’s also common for bags to be lost by airlines (I learnt this the hard way…you’ll see I’m swimming in pyjamas below because the airline lost my bag). So make sure you’re insured! For insurance, I use World Nomads for my travels for a number of reasons. One of those is because they offer adventurous activities cover including snorkelling with whale sharks. You can get a quote with them using this link. 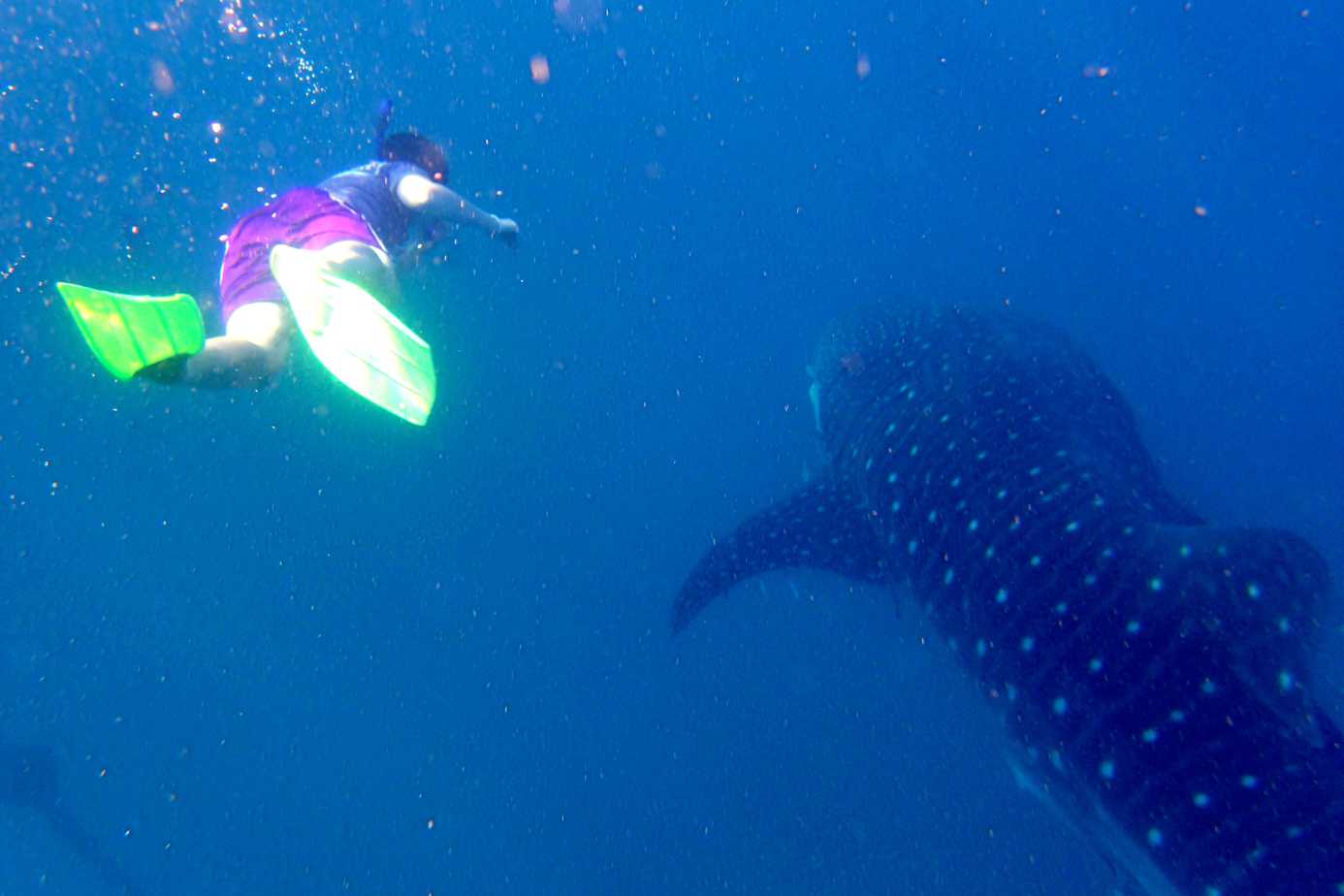 The lodge or hotel that you are staying with will be happy to organise your whale shark tour, however (!!!) be careful as they will often say they have booked you with the tour company you asked but in actual fact will take you somewhere else. For their experience, warmth and comfort I fully recommend Afro. I also liked that they were relaxed letting us take as long as we want and also offer a longer tour (more chance to see the sharks) than others as they leave an hour early. Whoever you choose to book with, here are my top tips:

Since writing this blog post I have returned to Mafia Island a further 2 times, also working on conservation projects with the whale sharks (I became a little obsessed!…..if you are from the UK also check out my latest project, Blu-ee Fest). Whale Sharks are a vulnerable species whose numbers are in serious decline. They face threats from fishing, pollution and finning. Swimming with Whale Sharks offers an incredible experience that really connects you to our ocean. While on Mafia you can do your bit to look after these creatures. I really urge you to encourage your tour company to follow the code of conduct when swimming with the sharks and if you see anything that isn’t ok (like littering or aggressive driving) that you speak up. The rules that should be followed on these tours are: leaving 10metres between the boat and the shark. Cutting the engine when the boat gets near. Not jumping from the boat (only lowering yourself in the water) and also not touching the sharks. And there should be no more than 10 people swimming with the shark at one time. Following the rules actually leads to a much more relaxed experience and the sharks are less likely to swim away from all the noise and splashing so it works in your favour too. Swimming with more than 10 people in the water feels like a scene from the Titanic….it’s not fun!! Over-fishing is also a huge issue in the area. You can MASSIVELY reduce your impact when visiting Mafia (and other islands) by not eating lots of seafood when you are there…..tourists are effectively taking away the food source from locals and marine life. It’s worth thinking about! Lets all do our bit to help protect the Whale Sharks.

If you are planning a visit I’ve done all the groundwork for you with my Tanzania Mafia Island guide. You might also want to check out my list of things to do on Mafia Island and my complete budget breakdown in how much does it cost to visit Mafia Island. And if you are thinking about diving, check out Mafia Island Diving guide If you have any questions, please do ask using the comment box below and I’d be happy to help! If you found this blog helpful, follow me on Facebook, Twitter and Instagram. Or you can subscribe to my YouTube channel. I give all my advice out for free on my website. If you want to say thanks, you can buy me a coffee! *Any women reading this?* I founded a women’s adventure community called Love Her Wild. Check out our private Facebook page and see what adventures we have coming up.