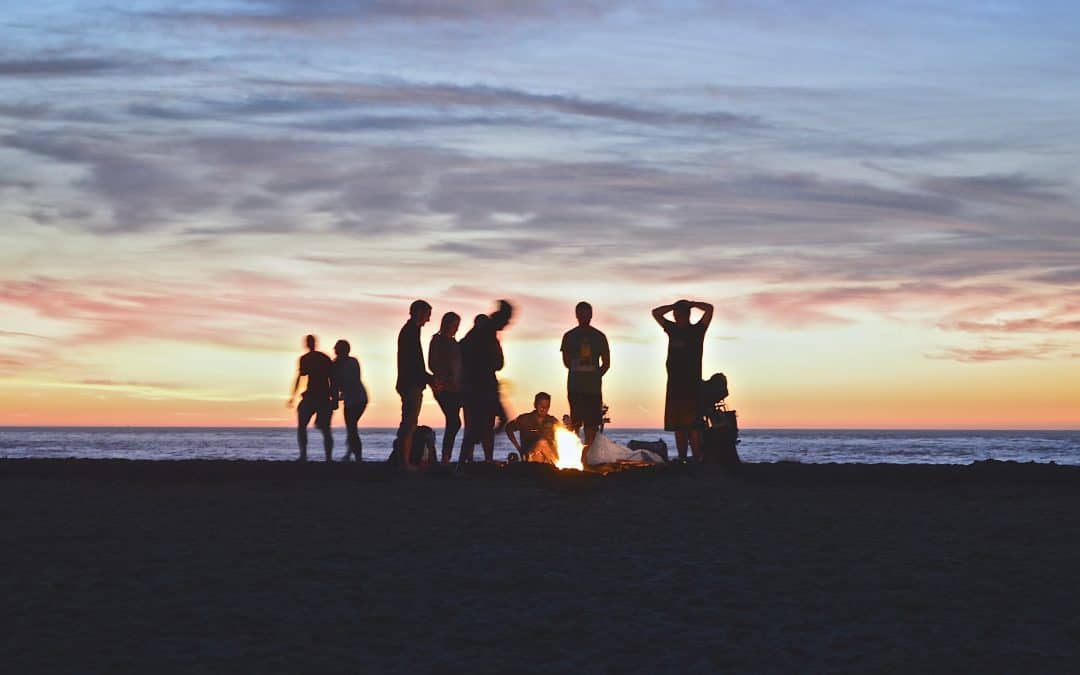 I love a good game when out camping with my mates….so here are a few of my favourites! The games are split into 2 sections: adult campfire games and adult camping games.

The campfire games are designed to be suitable for sitting around a campfire of an evening. Little or no physical activity is required….just a bit of brainpower and good humour.

The camping games are more active. Best played in a field and usually in teams. These are perfect for a sunny afternoon when you’ve got a few hours to kill. I’ve chosen games that require little equipment, usually just a ball.

Only the best games in my repertoire have made this list so I hope they bring you a lot of memories and good fun! If you’ve got a fun camping game you’d like to share, please do so using the comments box below.

If you are new to this blog, I’m Bex Band – a full-time adventurer and founder of Britains largest women’s adventure community, Love Her Wild. I’m on a mission to make the outdoors and adventures as easy as possible. You can read more about me here.

If you have any questions, please do use the comments box below. And for ongoing tips and inspiration on camping and adventure, make sure you follow me on Facebook and Instagram. I’d appreciate it 🙂

**BOOK COMING SOON!** I’m writing a book about my first big adventure hiking the length of Israel (read more about my book deal here). To be first to hear when it is available for pre-order sign up to my newsletter.

There really is nothing I love more than sitting around a fire outdoors playing a game! So here’s my favourite collection of adult campfire games.

Each game states the minimum number of players and any equipment that is needed to play.

This is a good game to play on-going throughout an evening or even across a weekend camping. You don’t need to be playing the game constantly but can dip in and out of it throughout the day to catch the next player out.

This game can only be played once so pick your timing well as it’s really funny when done right. It only works with a group of people who know each other fairly well.

This is probably my favourite of the adult campfire games….if you’ve only got time for one, choose Werewolves! Although the rules seem a little complicated at first they are easy enough to pick up as you begin playing. I love the politics and scheming that comes with this game.

This is another easy but fun adult campfire game which will have your group laughing. You just need to know each other well enough to remember names.

Empires is best when you are with a group who are willing to give away the best secrets! It’s a great game for conversation starters but can only really be played well once or twice within the same group as it gets hard coming up with good secrets.

This is a classic game which works well around a campfire. It’s not as fun as the other games but is a good introduction game for a group of people that don’t know each other well yet or who aren’t very outgoing.

Another more chilled evening game that is a good quick filler to warm a group up.

I like to make this game competitive so always have prizes up for grabs for the winning team (or forfeits for the losing team). You can also use your imagination to make the categories a little more controversial and also specific to your group.

The last in my adult campfire games is 20 Questions. This is a variation of the Who Am I game above.

These camping games for adults require some outdoor space for play (a flat field is usually ideal) and a bit of enthusiasm for those participating. They are all really fun to play…..especially with groups that are a little on the competitive side!

The games list the minimum numbers of players needed as well as any equipment. If you need to mark out space or court, you don’t need anything special to do this – a jumper or spare shoe will work just fine.

A more competitive and interesting take on dodgeball!

The more competitive the teams, the more fun Boat Race is to play. I’d start off with a simple back and forth race but then make it more interesting by adding in obstacles. With larger groups, you can have more than 2 teams competing at the same time.

Minimum 12 players
Equipment needed: bat and ball (if you don’t have a bat and ball you can also just use a football)

This is a more energetic and competitive version of rounders. You’ll need to allocate a team member to keep track of scores.

Minimum 12 players
Equipment needed: 12 bits of ‘treasure’ (could use cups, balls or even rocks)

Of all the camping games for adults, Scots and English is easily my favourite! With competitive teams watch out for cheating 🙂

French cricket is a nice relaxed game that players can easily dip in and out of.

Of all the adult camping games this is probably the simplest but also one of the most fun. The concept is east so once you’ve split your teams up you are good to go!

This is a rowdy game – so your teammates all need to know each other well – but also really funny when played properly. The game needs to be played at night and make sure you are away from anything dangerous like fires as the ‘ghosts’ can end up blindly rolling about a bit!

This is a similar game to Prisoner Ball but players are competing individually rather than as a team.

Minimum 8 players
Equipment needed: 2 or 3 cans and a tennis ball

This is another relaxed game similar to French Cricket but without the need of a bat.

*Any women reading this?* I founded a women’s adventure community called Love Her Wild . Check out our private Facebook page and see what adventures we have coming up.