I literally don’t have words for Gloucester’s Coopers Hil Cheese Rolling Festival……it really does have to be seen to be believed. Despite numerous attempts to close down this historic event, I’m happy to say that it’s still going strong. No question, this has to be the best day out you can have in the UK. If you haven’t been yet you better get on it before it’s too late! Here’s my cheese rolling festival guide to make sure you make the most of the day.

It’s a simple concept. Willing participants line themselves up at the top of Cooper’s Hill next to a handmade, seven-pound circle of Double Gloucester Cheese which is let loose.

Participants then run (fall) down the hill to try and catch it.

The cheese always wins the race. But the first person to reach the bottom is claimed the winner and gets to take the battered cheese home.

This bizarre event has taken place annually for over 200 years (although during the WWII rationing meant the cheese was replaced with wood).

Brockworth was crammed with people on the day of the Cheese Rolling. The event now attracts over 5,000 spectators and fearless participants from all over the world.

Signs tell you everywhere, this event is no longer official and was technically banned in 1998 (I’m guessing they had an issue with clearing health and safety…!).

Thanks to a few dedicated locals the tradition is kept alive. 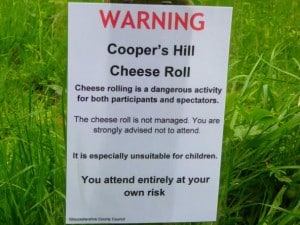 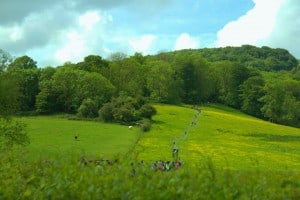 We followed the crowd as they meandered through fields, trees and steep inclines to a clearing in the woods called Coopers Hill. It was a long trek but we eventually arrived at the infamous spot. How steep is Coopers Hill? STEEP!!

To make things worse the hill was uneven and overgrown with thorns. Why would anyone choose to throw themselves down it?!

No picture can show how steep this hill really is. 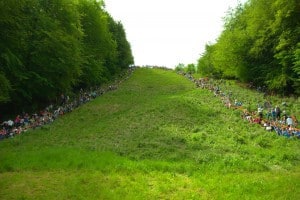 Anyone can join in the race, you just need to get yourself to the start line. A guy next to us decided to join in last minute, much to the dismay of his wife (he ended up covered in bruises, scratches and a sprained back…she was not happy).

The race is over in seconds. A few people make it look easy but the rest trip, face plant, roll and spin out of control all the way to the bottom where there is a row of sturdy men to stop you. There are inevitable injuries like sprains, breaks and cuts and some of the more serious casualties have to be stretchered off.

I saw one of the female participant howling in tears out of shock after she had tumbled almost the full length of the hill (that’s her feet sticking out from a ditch in the hill, mid roll, in the photo below!).

It sounds horrific and it is, but as a spectator its really fun! 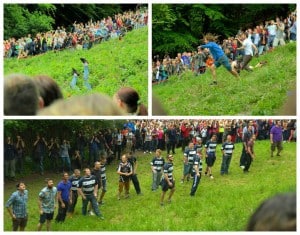 When and where is Coopers Hil Cheese Rolling

When: the last Monday in May (the Spring Bank Holiday). The first cheese is rolled at midday. There are 5 downhill races in total happening 20 minutes apart. In between each downhill race is an uphill race, including one for children.

Where: Brockworth, near Gloucester

You must be at least 18 years of age. There is also an uphill race that children can participate in. A lot of participants in the downhill races get serious lifelong injuries so have a good think about it first!

A one final shout out!

Before heading to the event, set aside 20minutes to watch this brilliant short film made by London filmmaker Chris Thomas. It’s a great feel-good film that nicely captures the spirit of the event!