I slept so good after last nights drama. In fact, I don’t even remember falling asleep.

Cal woke me up at 5am. Then she told me it was actually 4am so I went back to sleep. Half an hour later Mollie then woke us up saying we were running late. Our phones and watches were now showing different times…we reasoned that maybe the clocks had gone back an hour and we should get more time in bed!

We doubled back on ourselves into the Wadi but then took a right turn to climb up and over the mountain. The route today involved a lot of meandering. The GPS has developed an annoying delay which was making it hard to navigate. I thought about resetting the unit but then worried that we might lose all the files. 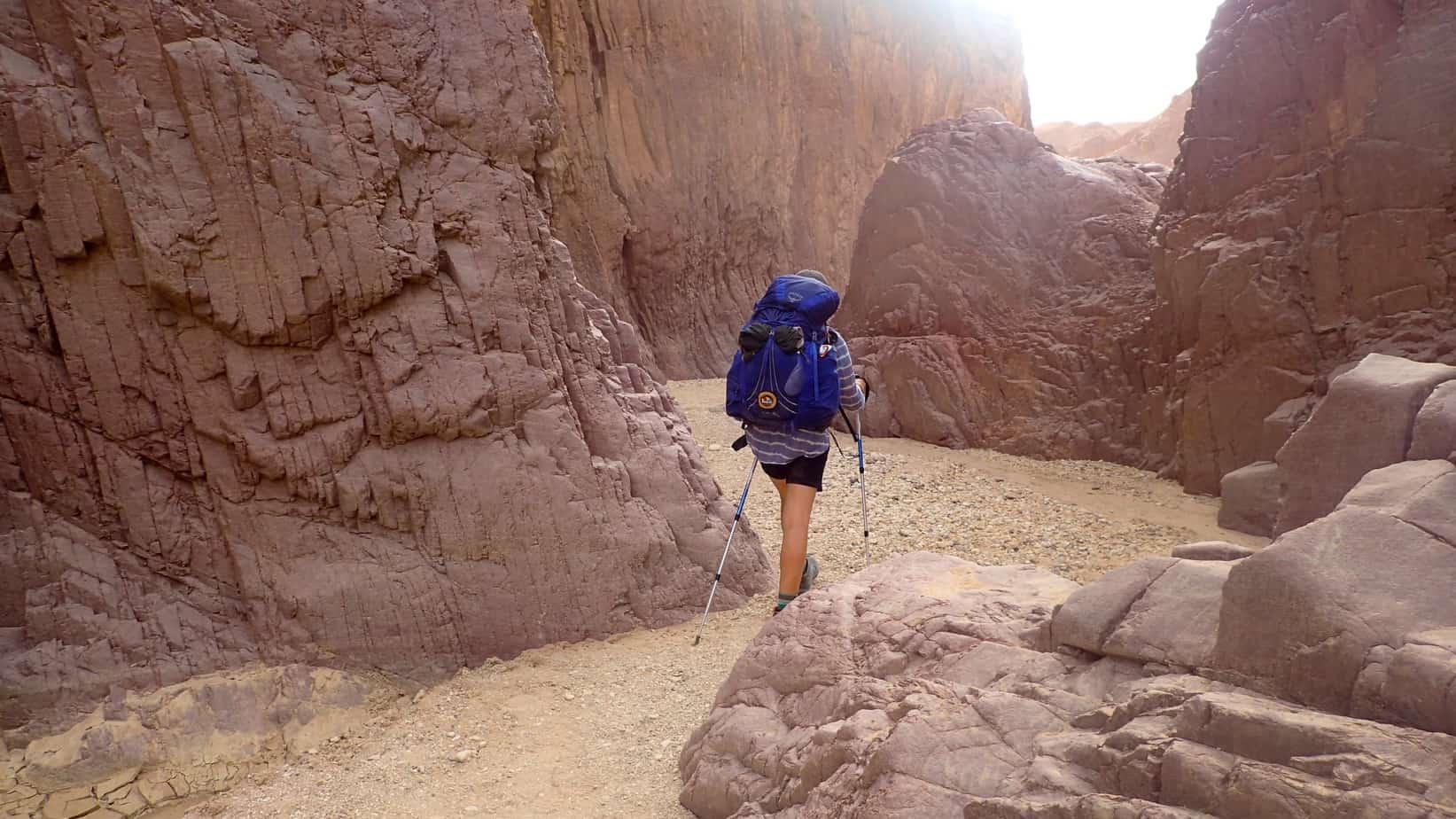 A few hours into the trek we ended up on a flat plateau and the worst terrain possible – sand! It makes walking such an effort, especially going up sand dunes when every step forward is added with a slide backwards.

My feet were unbearably sore today and I took painkillers for the first time. It was only about an hour into walking in the sandy terrain that I realised the sand was getting into my boot and the pressure I felt against my toes was a build up. I emptied my boot (about a litre of sand poured out) and instantly felt better. 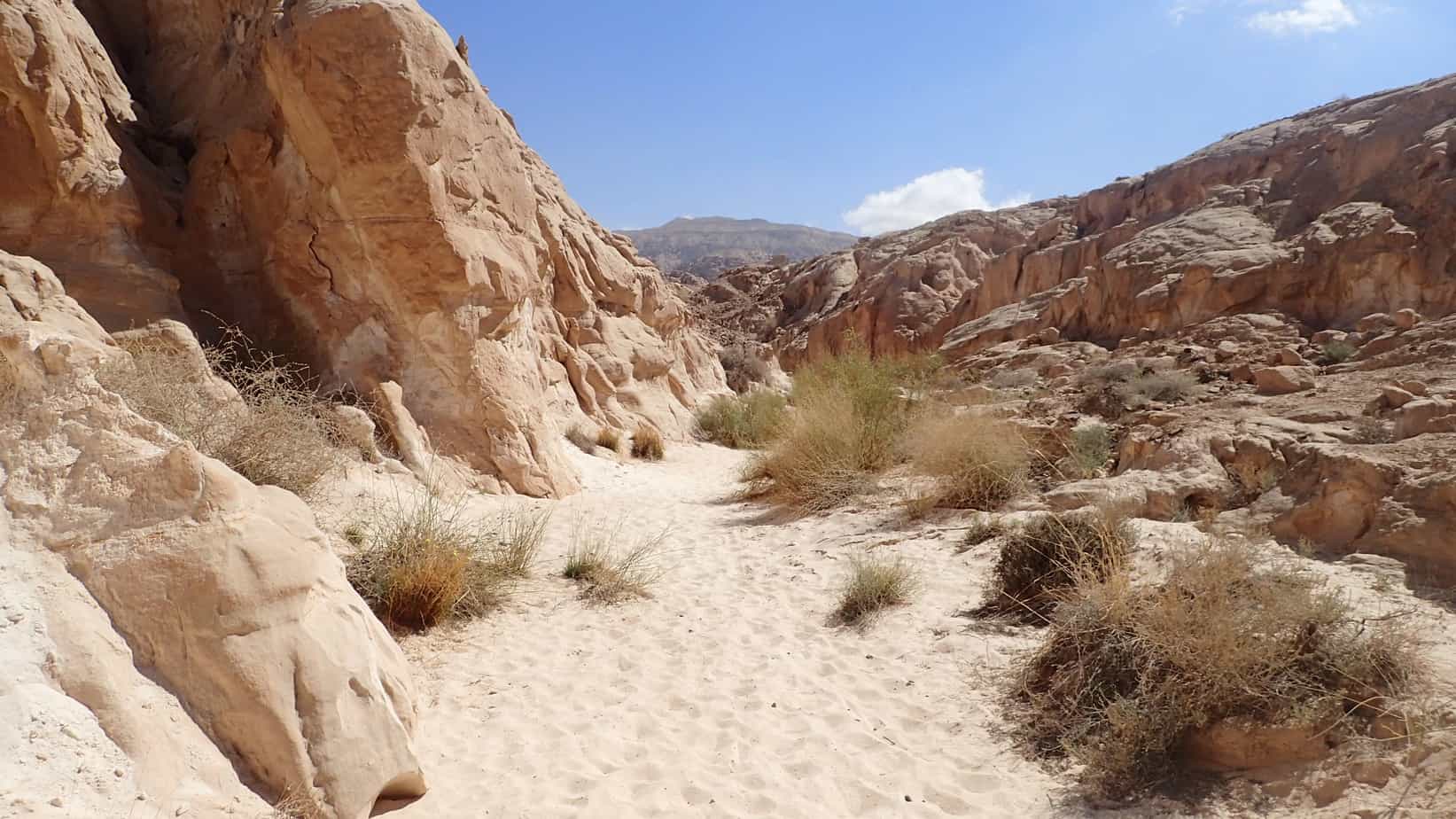 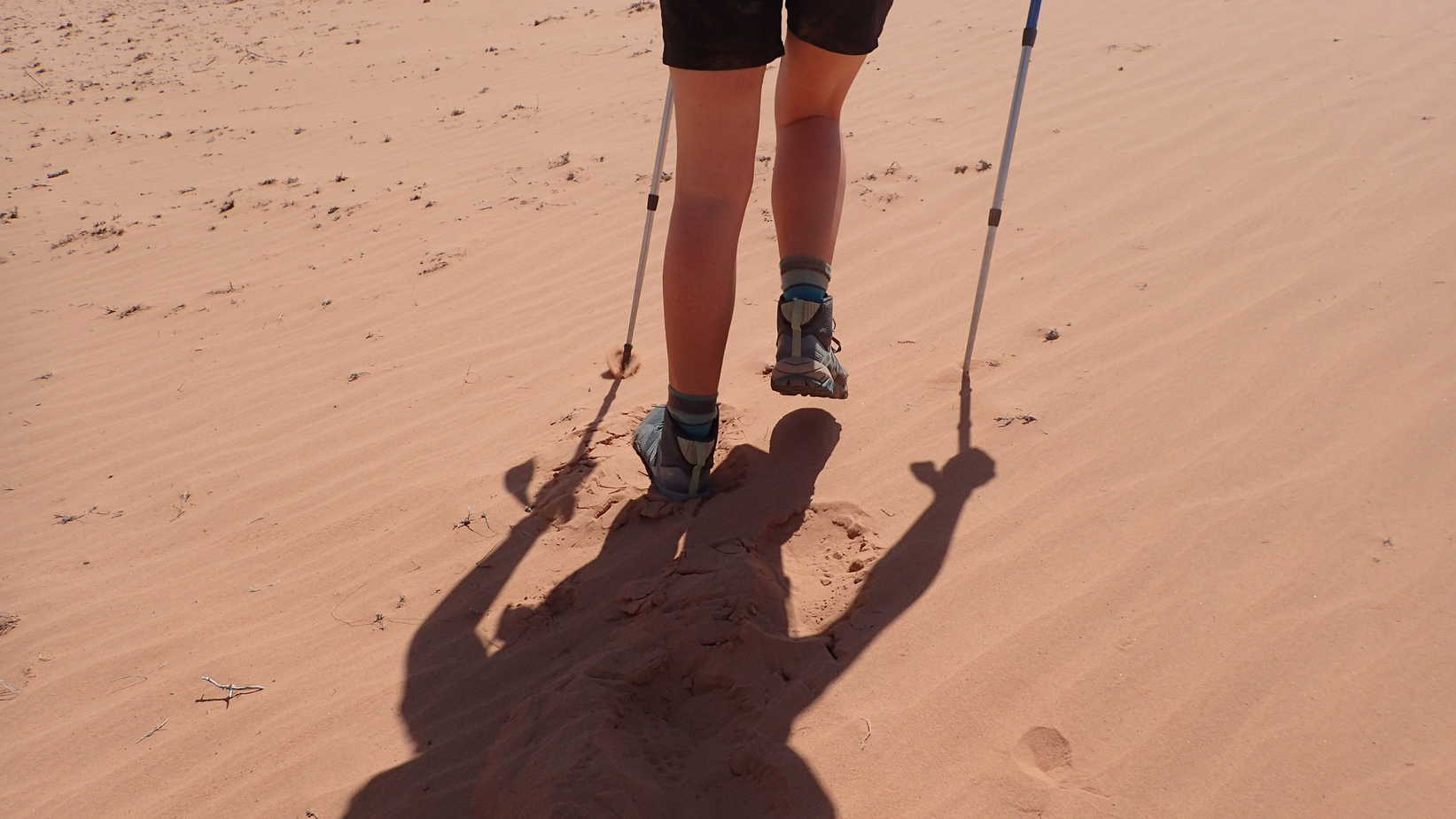 Not in the mood

I just wasn’t feeling it this morning. I think I was still tired from the ‘windy night’ and a bit fatigued from a week of hiking. In fact, I think we were all feeling it which had a bit of a downer on the general mood. Negativity is a downward (and exhausting) spiral so I focused on the views and reminded myself how lucky I was to be here because damn….the scenery was epic!!

At 12ish we found an impossibly inviting rock that looked like an profiterole dripping in chocolate with perfect shade. Shade is such a luxury in the desert. We collapsed under it for lunch.

I got my book out for a read while Cal snoozed next to me. 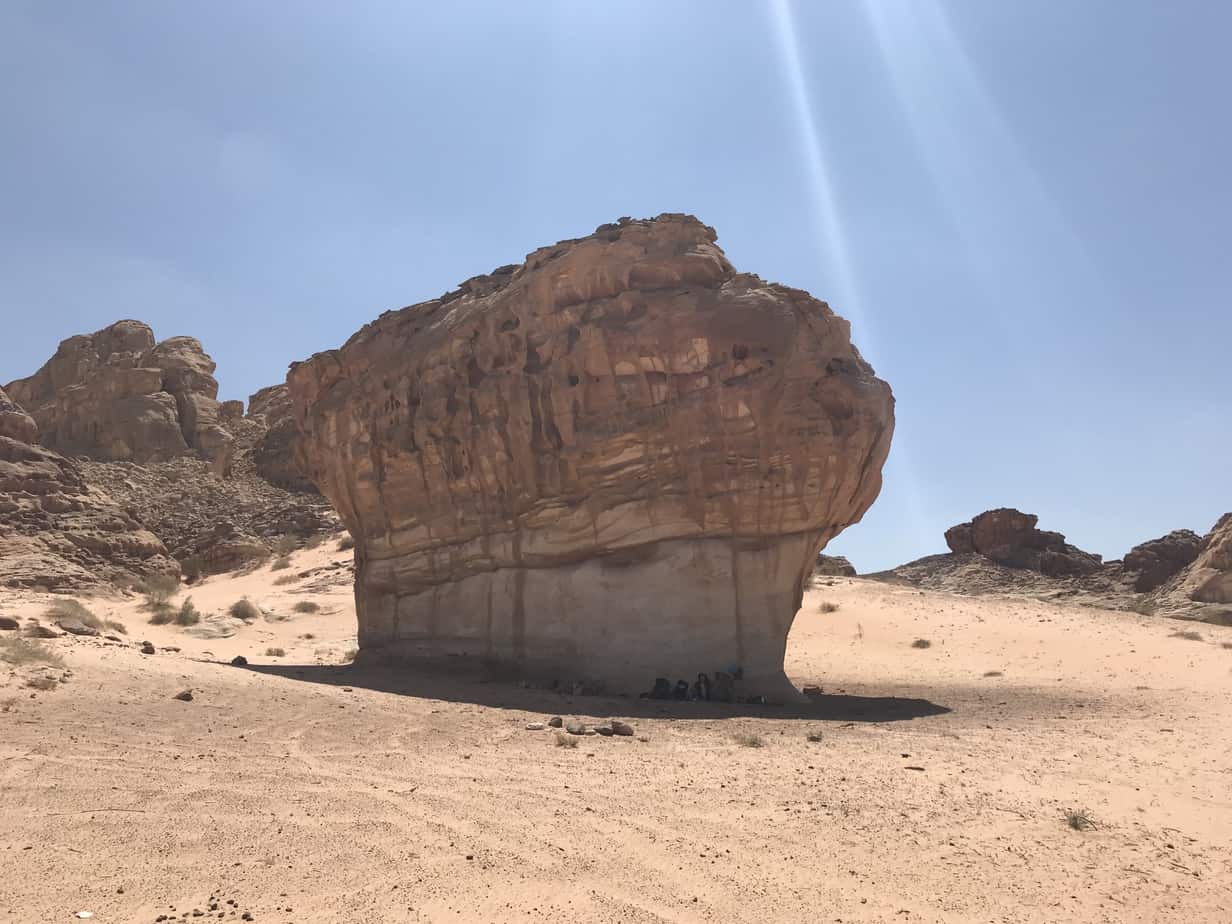 It was actually 30 degrees but the shade can feel really cold! 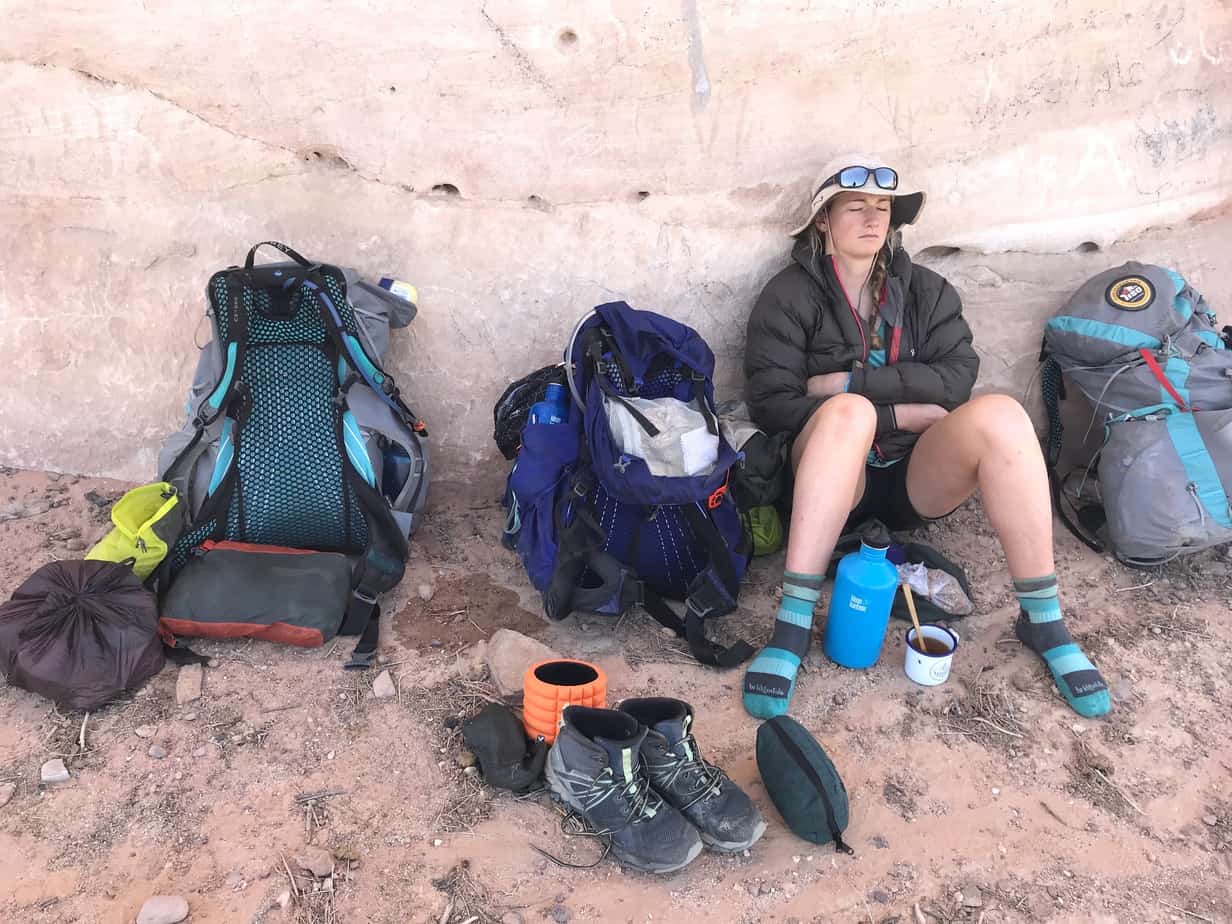 Today’s hike was only 14km. The last couple of km led us down a wide flat wadi where we found our wild camp spot and a pile of water…Muhammed was meant to bring it to us but I guess he decided just to dump it here instead!

It was only 3pm. I was keen to push on a bit further and try and take some distance off tomorrow, especially as we had taken such a long lunch break so was feeling rested. Mollie’s feet were hurting though so we decided to stay put. The Wadi has flash flooding risks so at least staying there meant we were in a safe area.

With a few rare spare hours on my hands, I finished my book (I was reading Stardust) and went for a wander on my own to watch the sunset and the moonrise. 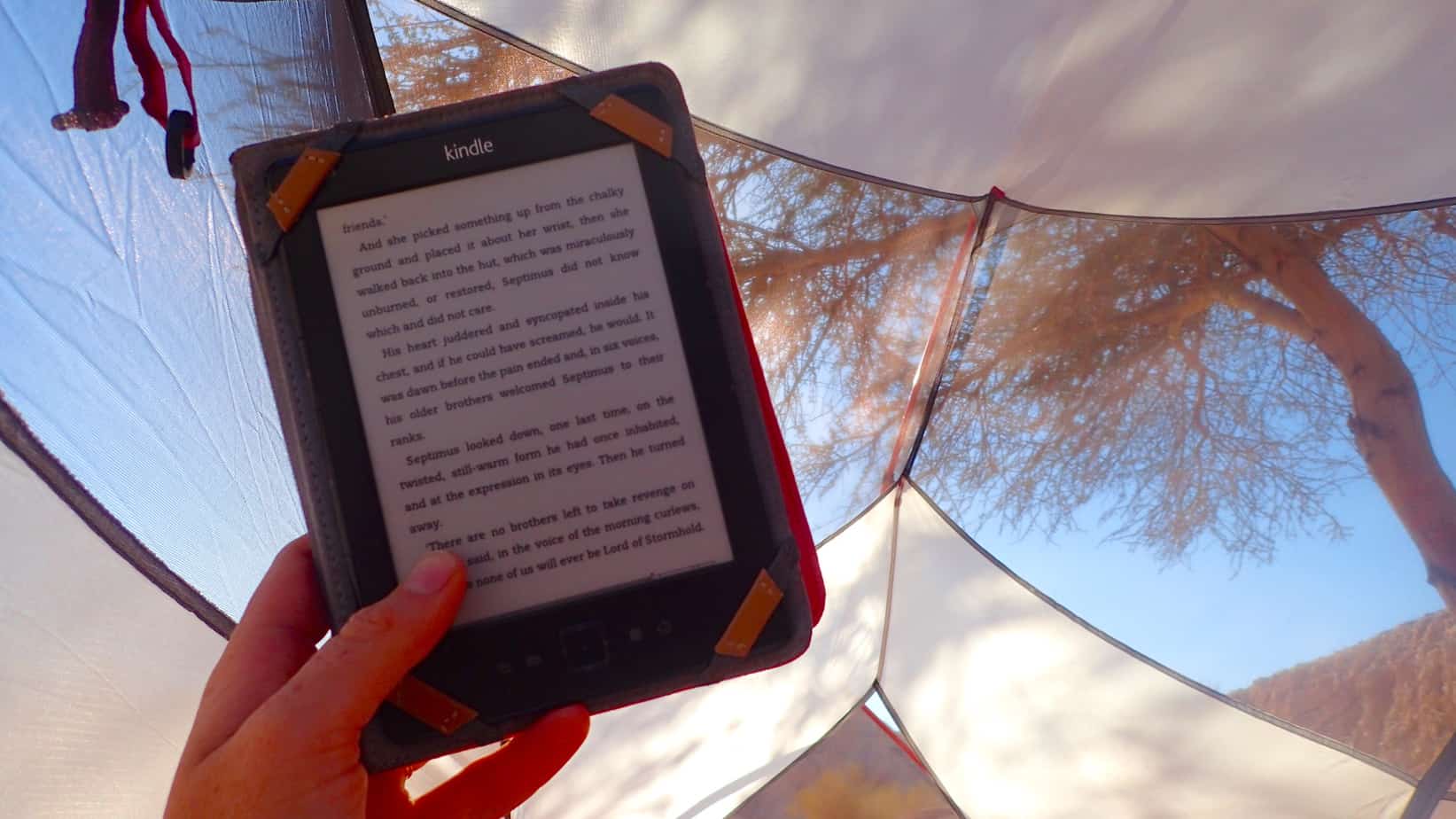 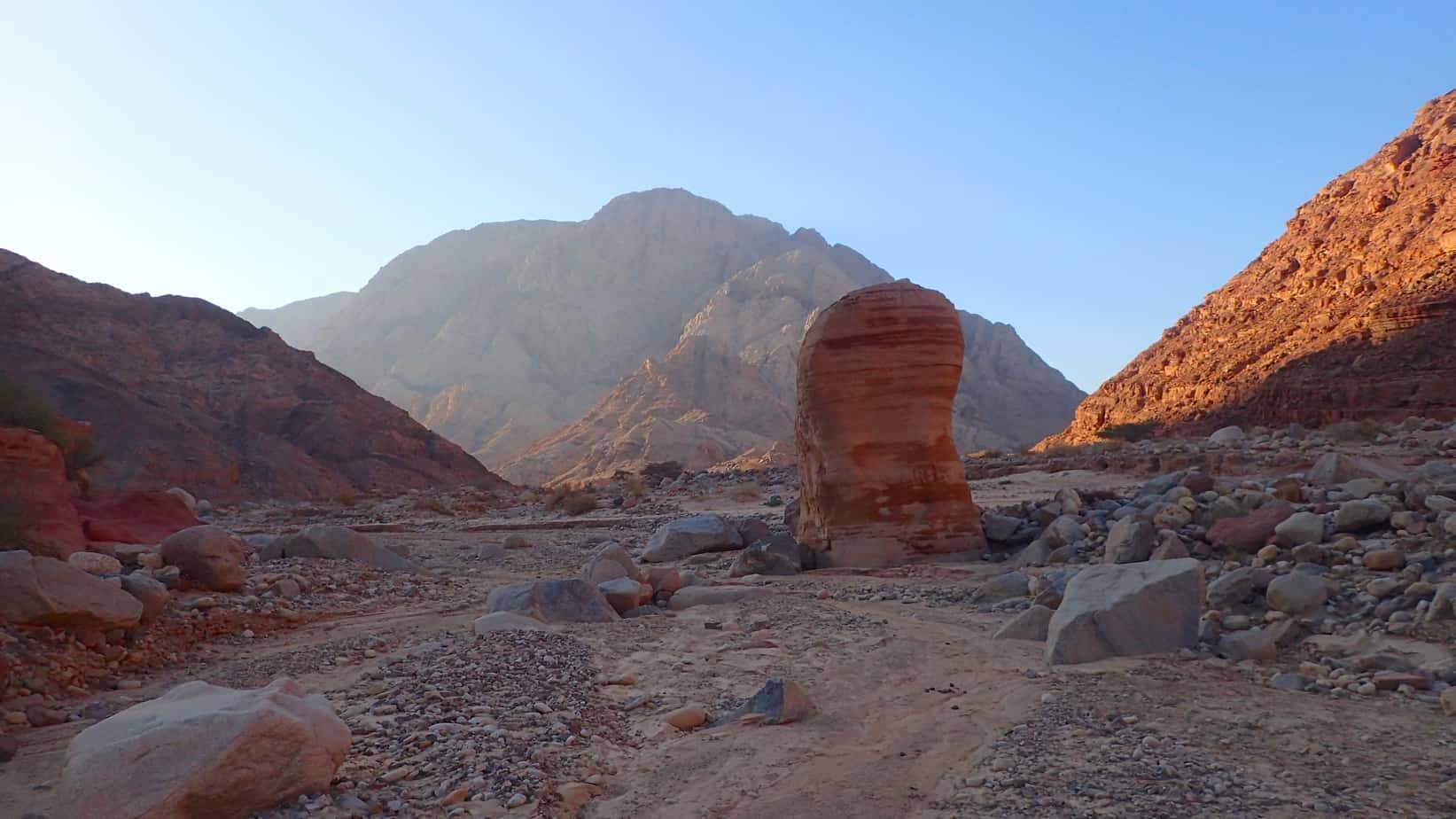 Check out my next instalment – Day 9 on the Jordan expedition

huge thank you to Tiso and Merrell for supporting this Jordan Expedition. As always, my blogs are my own and are written with 100% honesty. You can follow my adventures on Facebook, Twitter and Instagram.