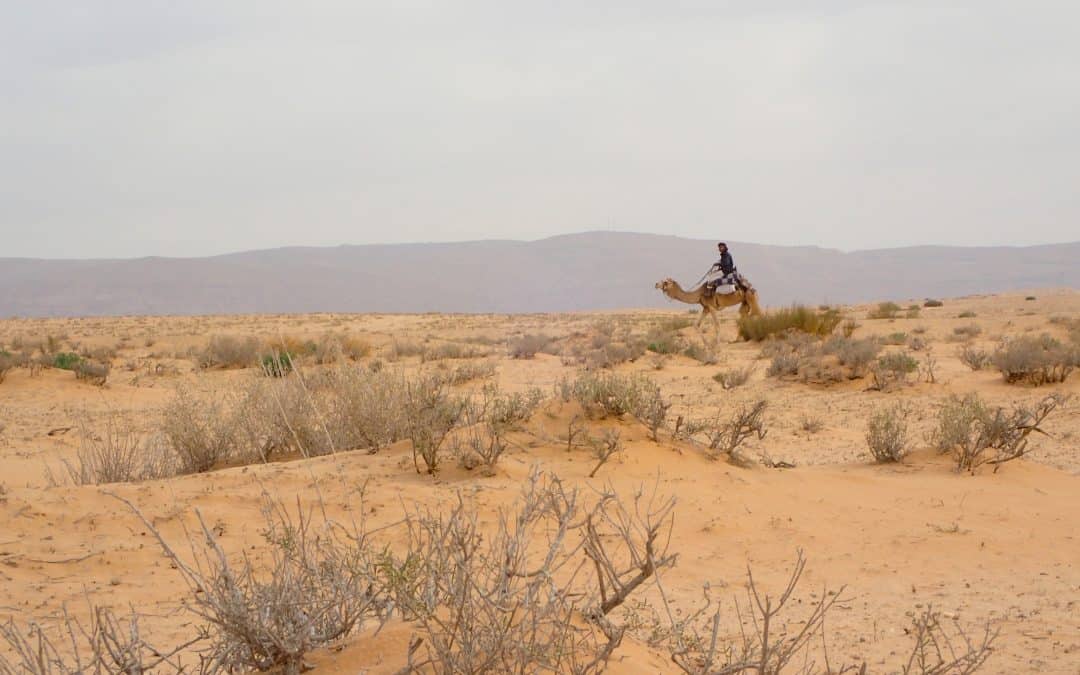 We forgot to close the door of our Bedouin tent so I was woken in the night by a huge rush of sand hitting me in the face as the wind picked up outside. Jordan is windy! I’d had my mouth open while sleeping so now had a mouthful of sand which was horrible. Along with the usual – eyes, nose, ears. Sand really is quite annoying!

Our Bedouin hosts made us tea and breakfast (bread with the most incredible olive oil and spices). It was so nice to eat a proper breakfast as I normally just have a handful of granola or trail mix.

Mollie, with her injured feet, was getting a lift by car to our camp spot that night so Cal and I set of alone. It was weird not being 3 of us.

There was no trail to follow today. Instead, we had to take a bearing and walk in a straight line across a flat sandy plateau that went on for 23km. This felt like the real desert! I was really looking forward to the day’s hike. 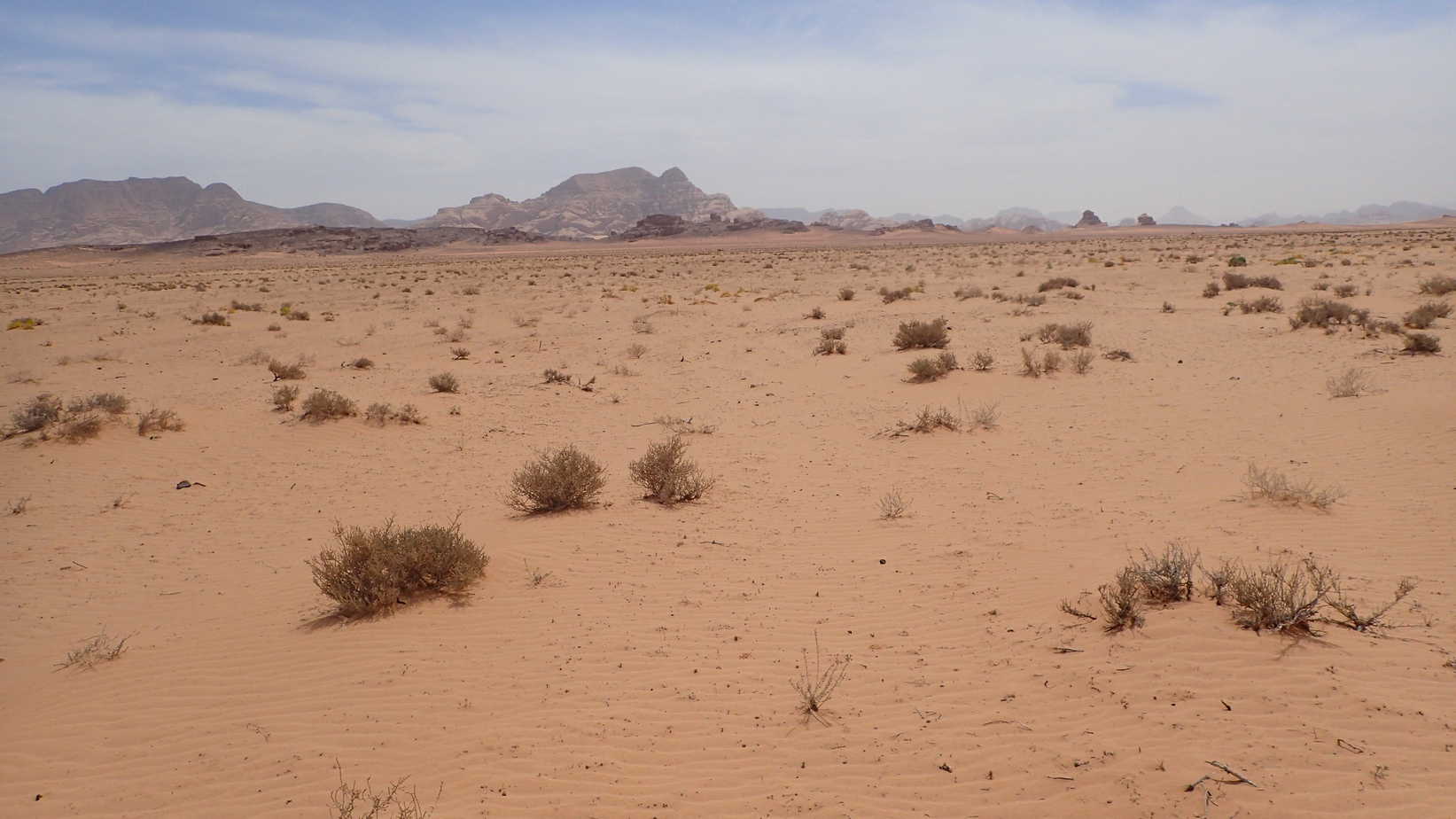 We smashed our 10km in under 2 hours…accompanied by some deep and meaningful conversations as well as some really bad singing and dancing. Cal is one of the few people I have hiked with who marches as much as I do so we were walking really fast.

We passed a Bedouin camp at one point and a vicious dog came charging at us, teeth bared. This was a usual occurrence when we neared Bedouins but this dog just kept coming at us. We both ran and sprinted up and over a small mound. Out of site the dog gave up and held back. It really got my heart racing. 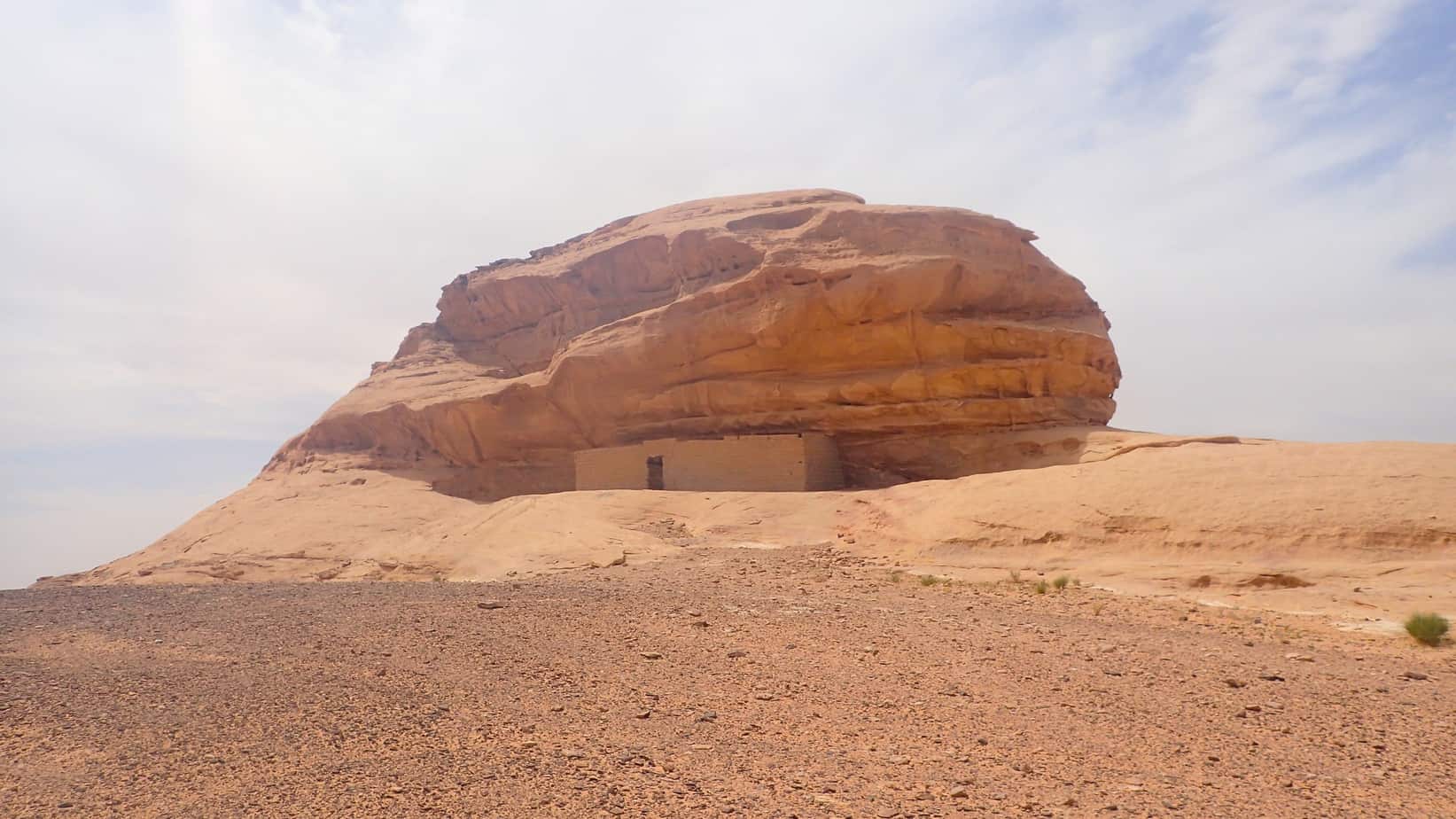 We took a break and shortly afterwards passed the halfway mark which was a giant highway called ‘desert highway’. It felt really odd seeing something so modern and fast and so out of place in this vastness.

An hour later we stopped for lunch under a large boulder. I felt really happy just resting in the shade enjoying the amazing views while Cal slept. 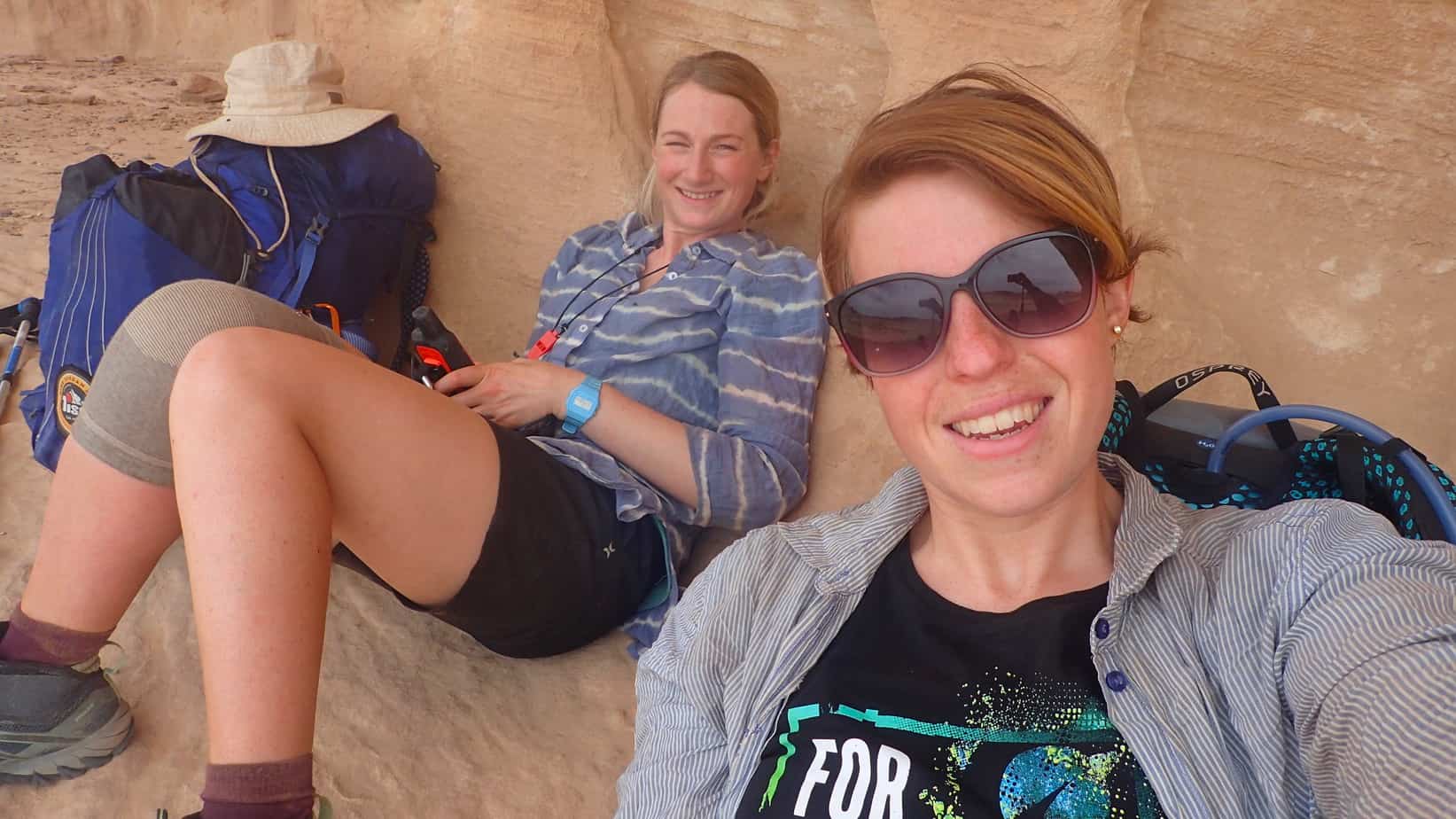 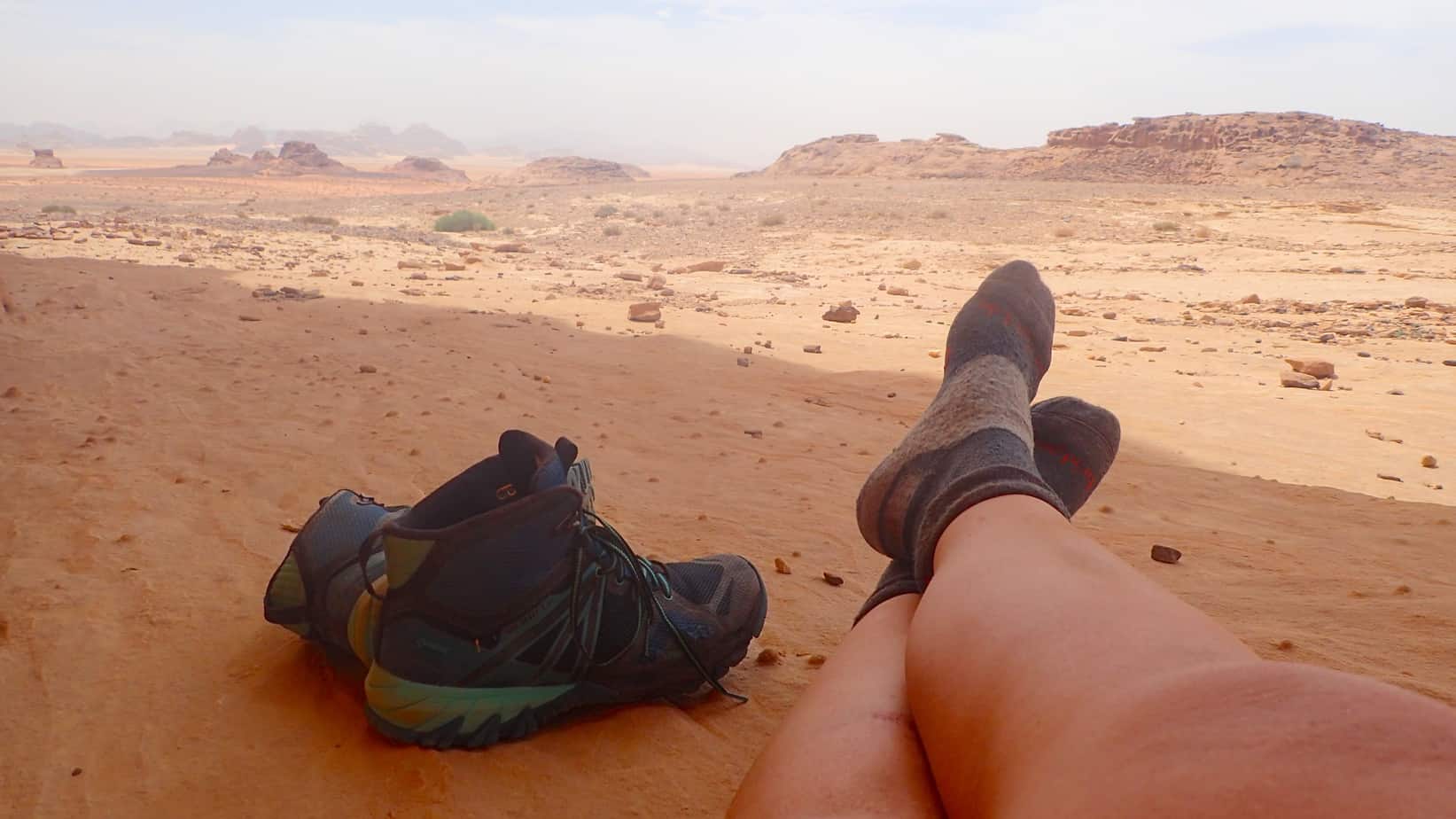 I suddenly heard someone singing in Arabic and saw 2 Bedouin’s passing by on camels. They came over to say hello and (as they always do!!) invited us to join them for tea later that day when we reach our camp. Apparently one of the camels had recently come second in camel racing. His owner was clearly very proud as we had to watch about 5 videos of the race on repeat. 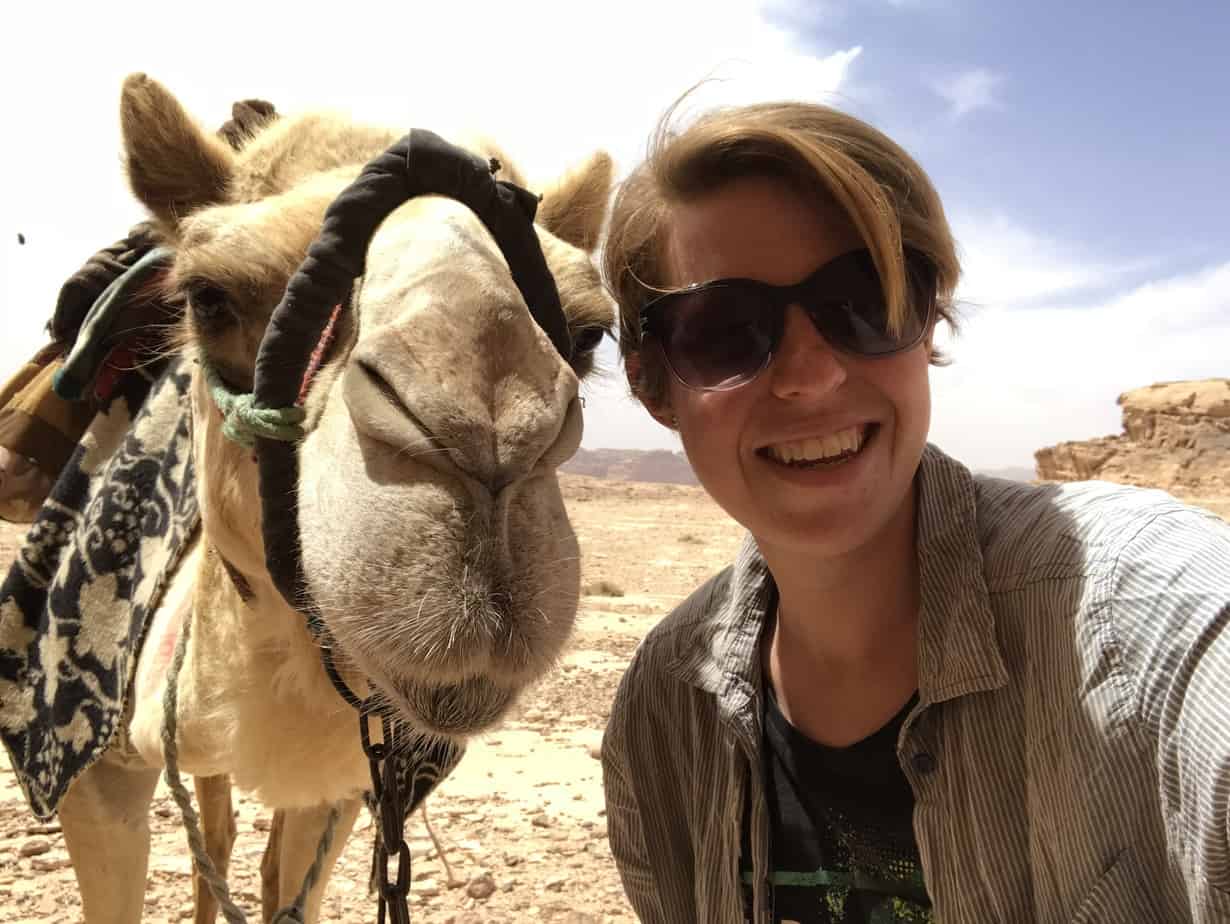 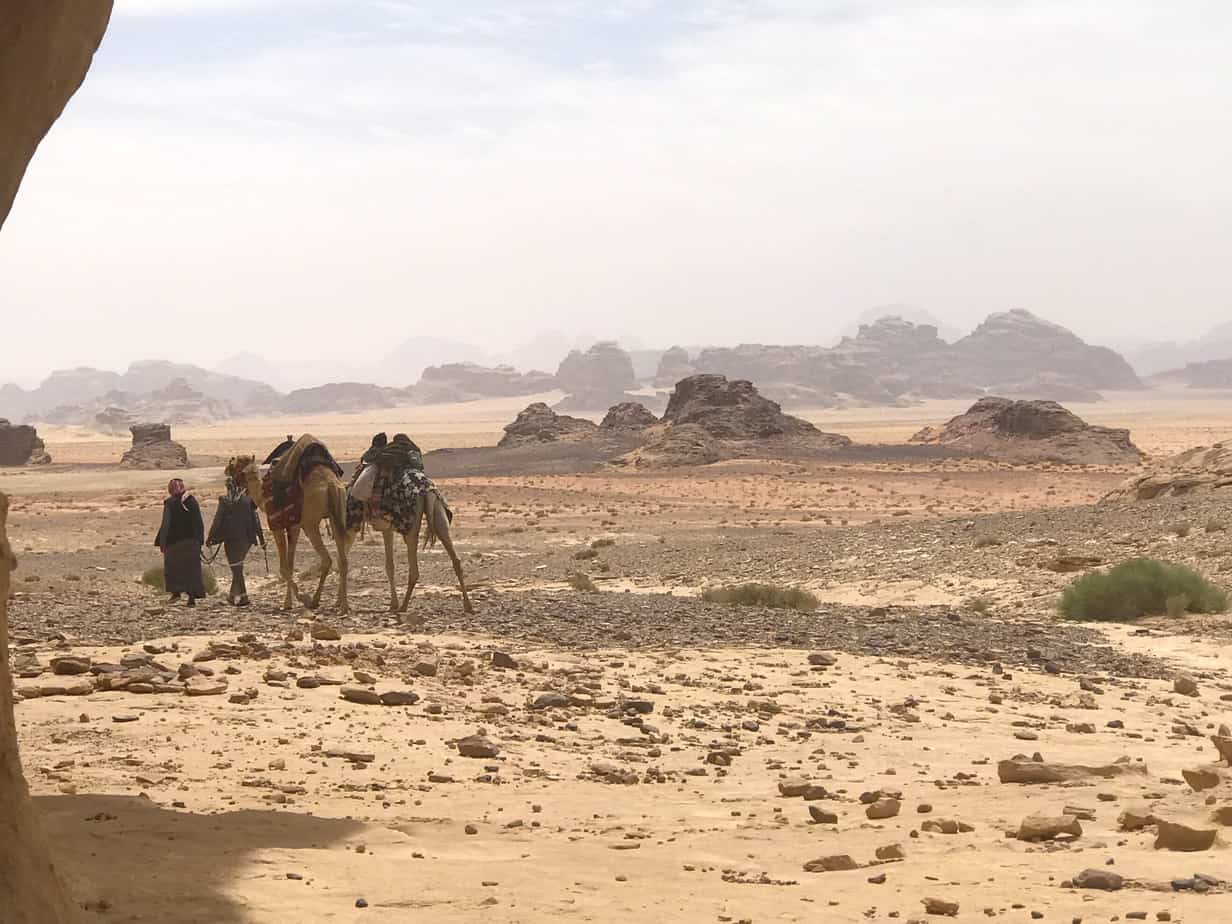 Going a bit crazy in the heat

We took a full hour and a half, our laziest lunch yet, and then headed off back out into the desert. After lunch is always the hottest. My food supplies are really low so I’ve been surviving on just a few snacks and spoonfuls of peanut butter. The combination of being hungry and the heat made me a go a bit strange in the head. I couldn’t find the tracks of the camels we’d just seen and was genuinely starting to wonder if I had imagined them. I then found that really funny and was trying hard not to laugh so Cal wouldn’t think I was crazy (it was a weird 20 minutes!) 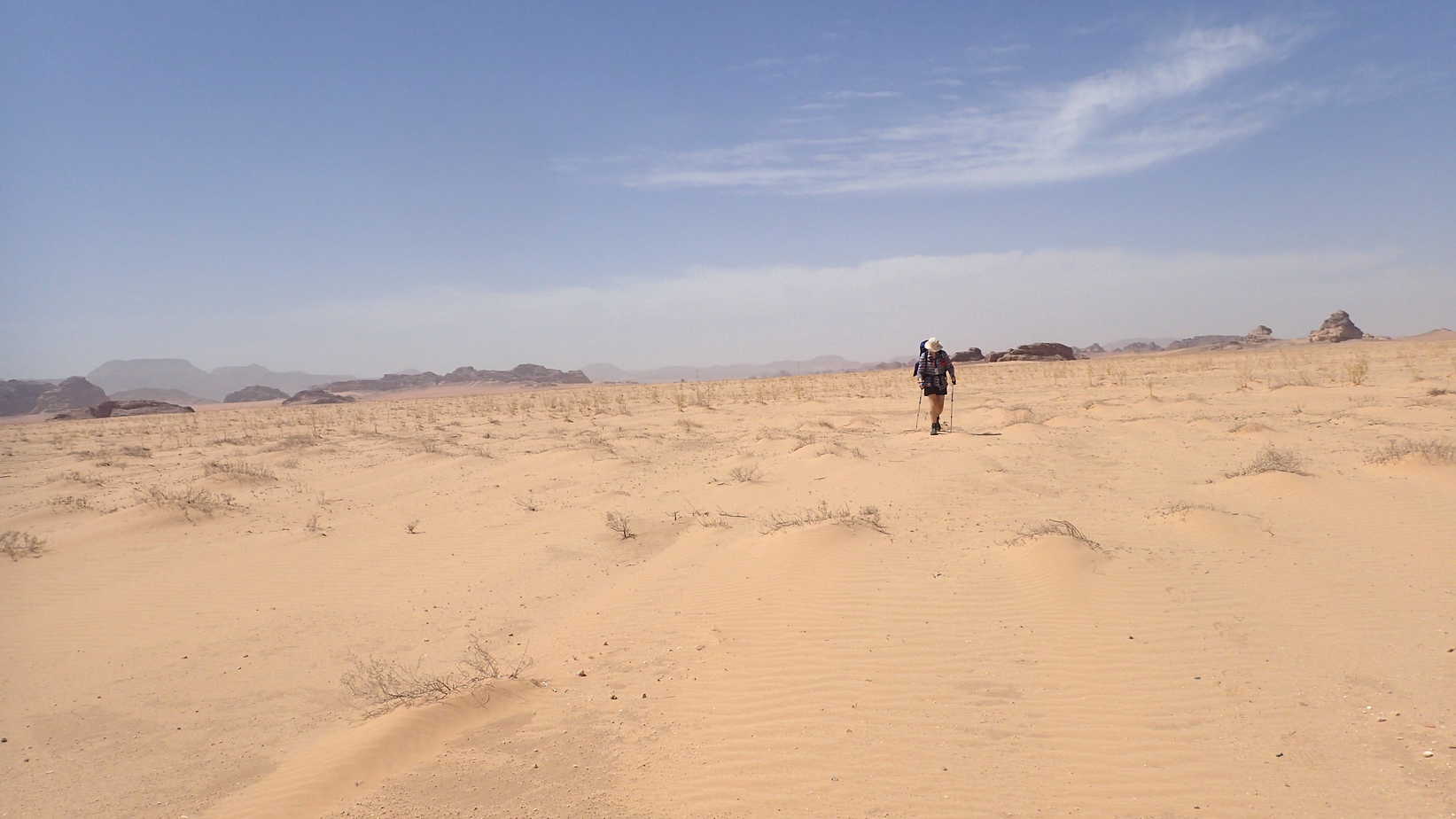 Both of us also couldn’t make sense of the direction we were heading. We were meant to be following a straight line but it felt like we were going completely the wrong way had were walking 90 degrees left. It didn’t help that the SPS was playing up again and was making me doubt it’s reliability. For the first time on the trip, I felt very vulnerable in the vastness with so little shade available and the realisation that we are so reliant on the tiny GPS unit.

We reached the camp spot early – 3pm – and was happy to be reunited with Mollie. I was also happy to see the 2 guys and their camels there…they weren’t just a figment of my imagination! 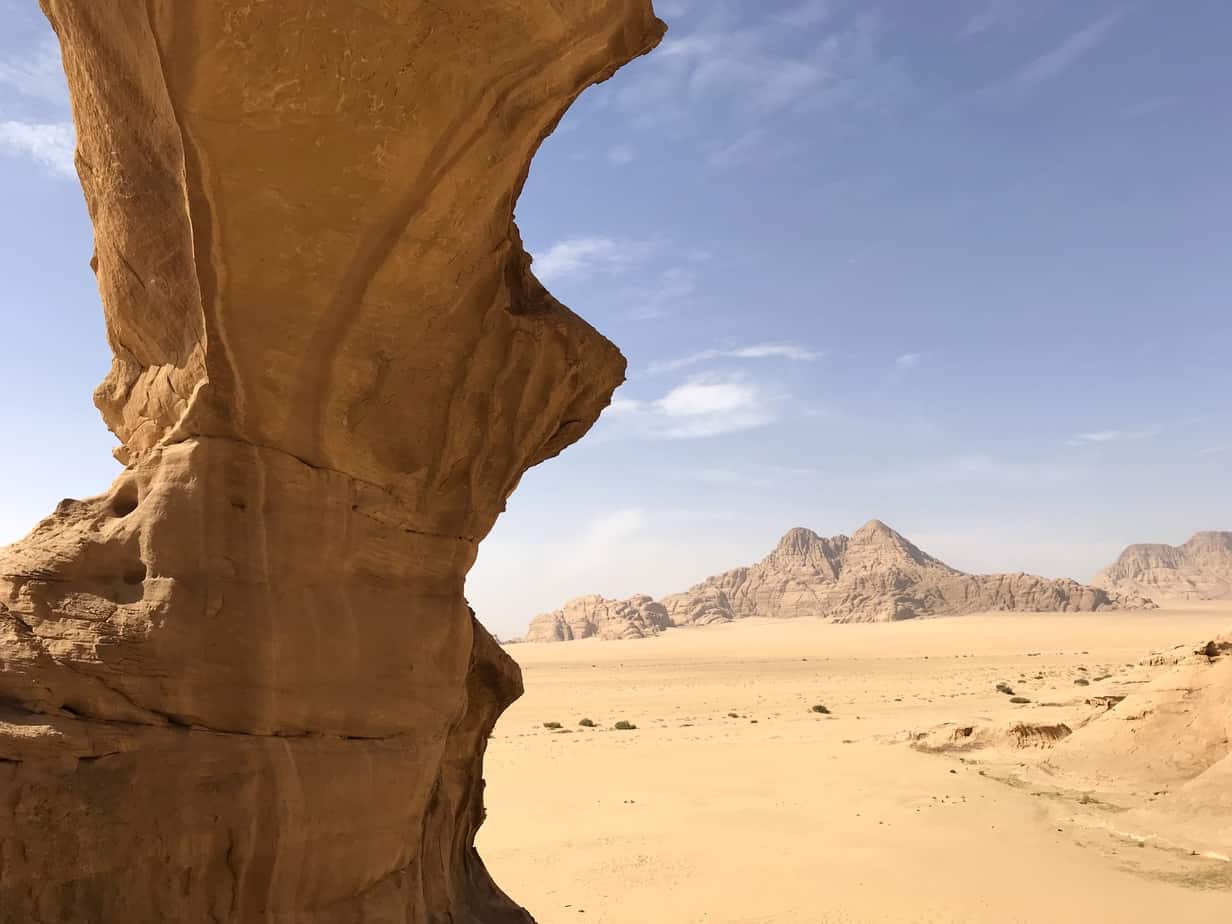 We were also met by our photographer who was here to take some pictures of us camping in Wadi Rum. We decided to cowboy camp (without a tent), perched under a natural rock bridge. It made for a very cool camp spot! 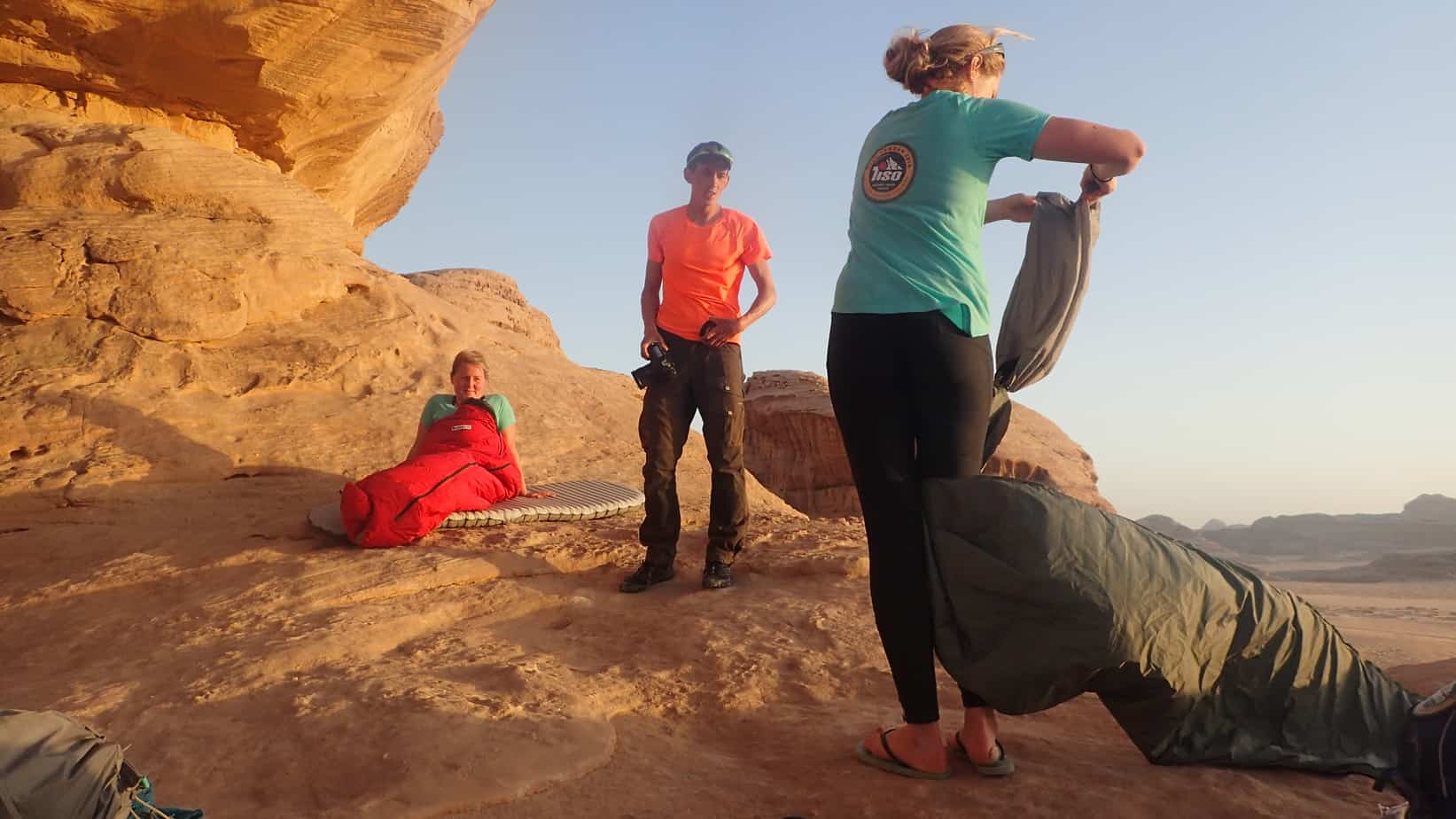 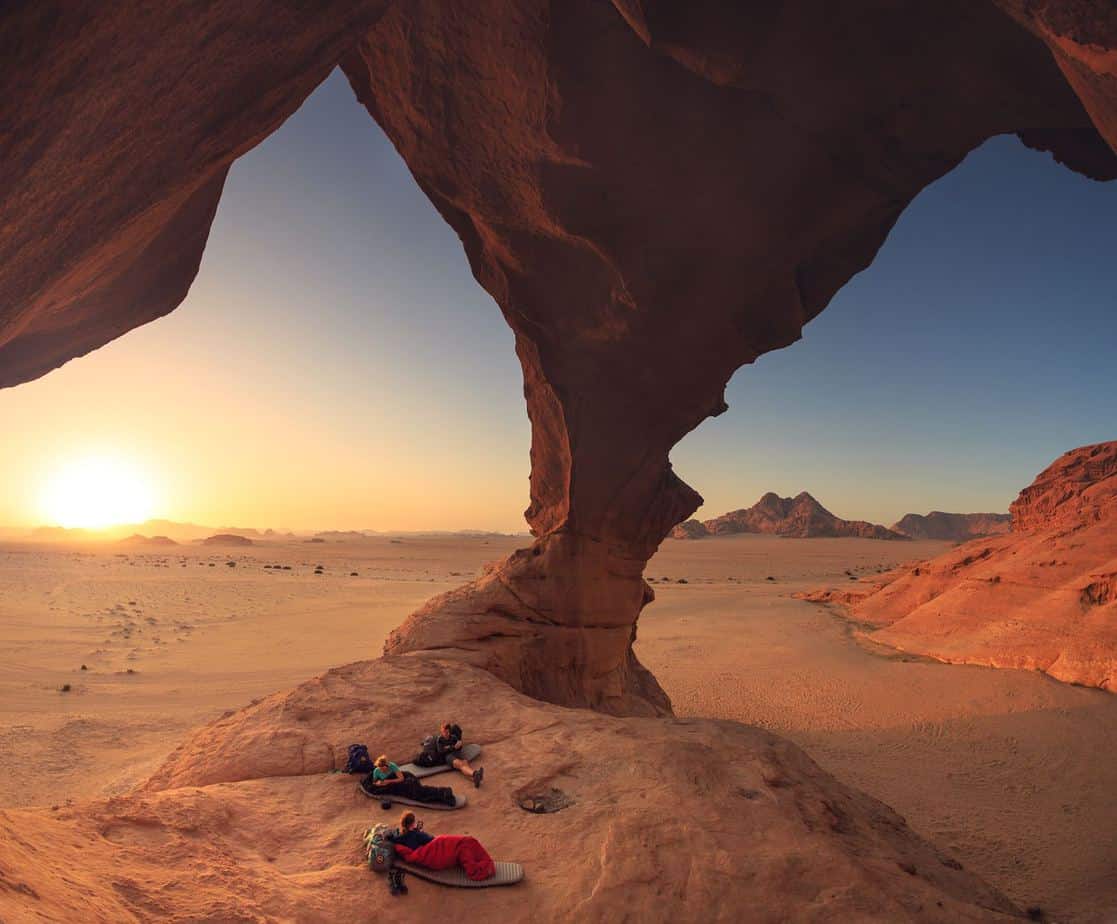 I had an expedition pack for dinner (rice and veg) but was still really hungry afterwards. I so can’t wait to eat a ton of food when I reach Aqaba!! We have just 1 more day of hiking left until we reach Rum village our final destination. I’ve loved being in the desert and the hiking so am sad that it is over so soon.

Keep reading my daily instalments…..check out Day 11 on the Jordan hike.