Is the West Bank worth visiting?

The West Bank had become a place I purposefully avoided in every way shape or form. Being married to an Israeli, politics has become an incessant part of my life despite my hatred of the topic. Everyone has an opinion on the Israel/Palestine conflict and most feel the need to tell me whether I want to hear it or not. My response….avoidance and forced positivity! So visiting the West Bank really wasn’t high on my list. Surely a day spent there is never going to be a positive thing?

It was my 7th visit to Israel and with a renewed spark for travelling and seeing new things there really weren’t many places left unturned in this small country. I couldn’t avoid it any more. It was time to see the West Bank.

There are only a couple of companies that offer West Bank tours and I decided to go with Abraham Hostel joining their 1 day ‘Best of the West Bank Tour‘ leaving from Tel Aviv.

It was an early 6.30am start. Israeli’s can’t travel to West Bank so I left Gil behind for a lie-in at Abraham Hostel and joined the other tourists on the coach for the 1-hour drive to the border.

By accident, I’d picked a hectic day to be visiting the West Bank. Firstly there was a big protest in the city Ramallah against changes the Palestine Authority had made to pensions. It was also the first day of Christmas and there was a turning on of the lights ceremony in Bethlehem.

Because of this, our schedule had changed and we began the tour in Ramallah. Although the protest wasn’t kicking off until the afternoon we saw some eager activists who’d been up all night.

We grabbing a street coffee and wandered through the centre of Ramallah. There was also a short visit to Yasser Arafat’s Tomb. We got back on the bus and drove to Jericho. In my head I imagined the West Bank to be crowded (I guess because of the association with Gaza) so I was really surprised to see how much nature there was. The desert was beautiful and we spotted a few Bedouin settlements.

Now I’m not a big fan of history but Jericho really fascinated me. I watched the obligatory cheesy intro film at the entrance of the park then went to see the sites.

We arrived at Qasr el-Yahud baptism site to groups of tourists dressed in baptism outfits. They travelled here form China, America and Spain. This is believed to be the site where Jesus was baptised and religious people come from all over the world to take part in a baptism ceremony in the muddy waters. I could’ve stayed and watched them all day.

I was most excited about seeing Bethlehem. We stopped for lunch first. The mint lemonade and the hummus were absolutely delicious.  It makes my mouth water just thinking about it! 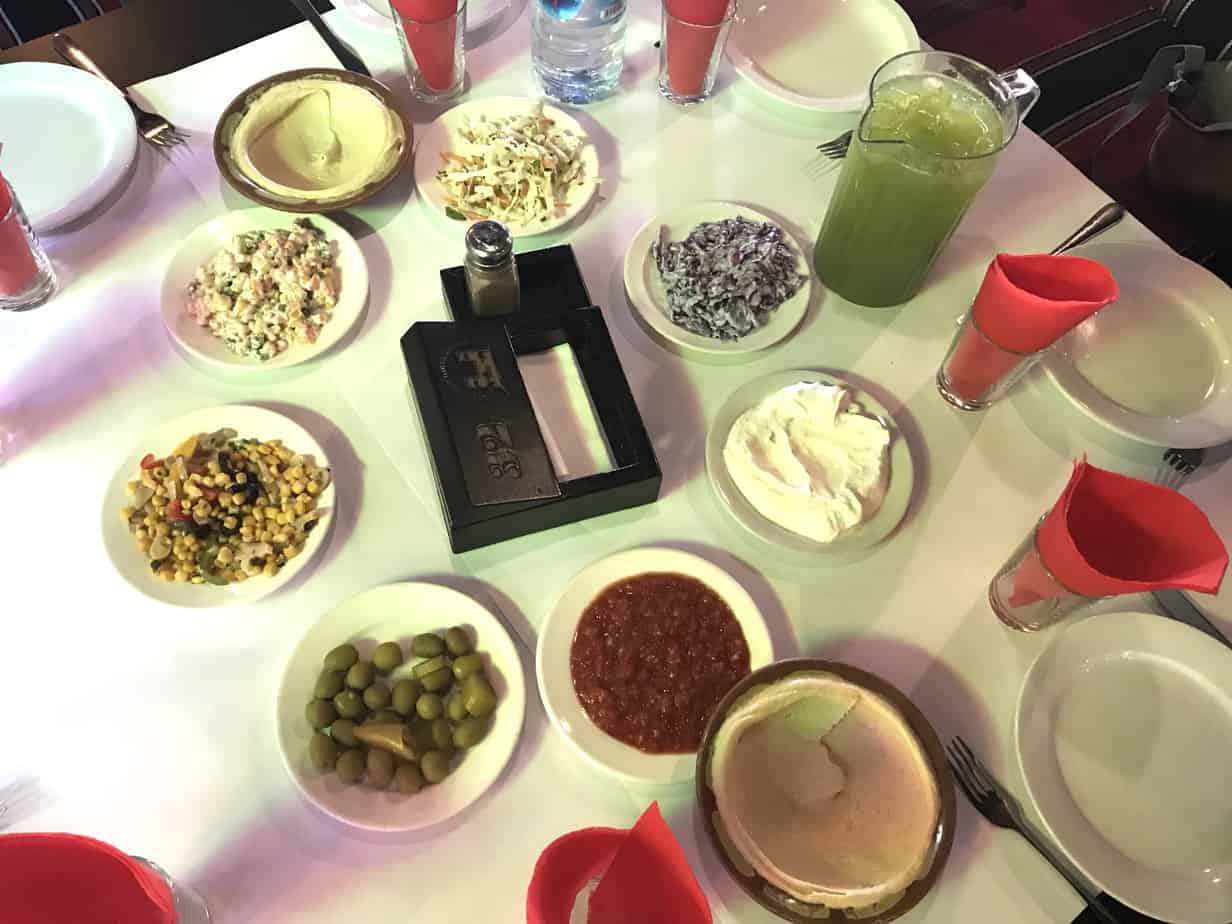 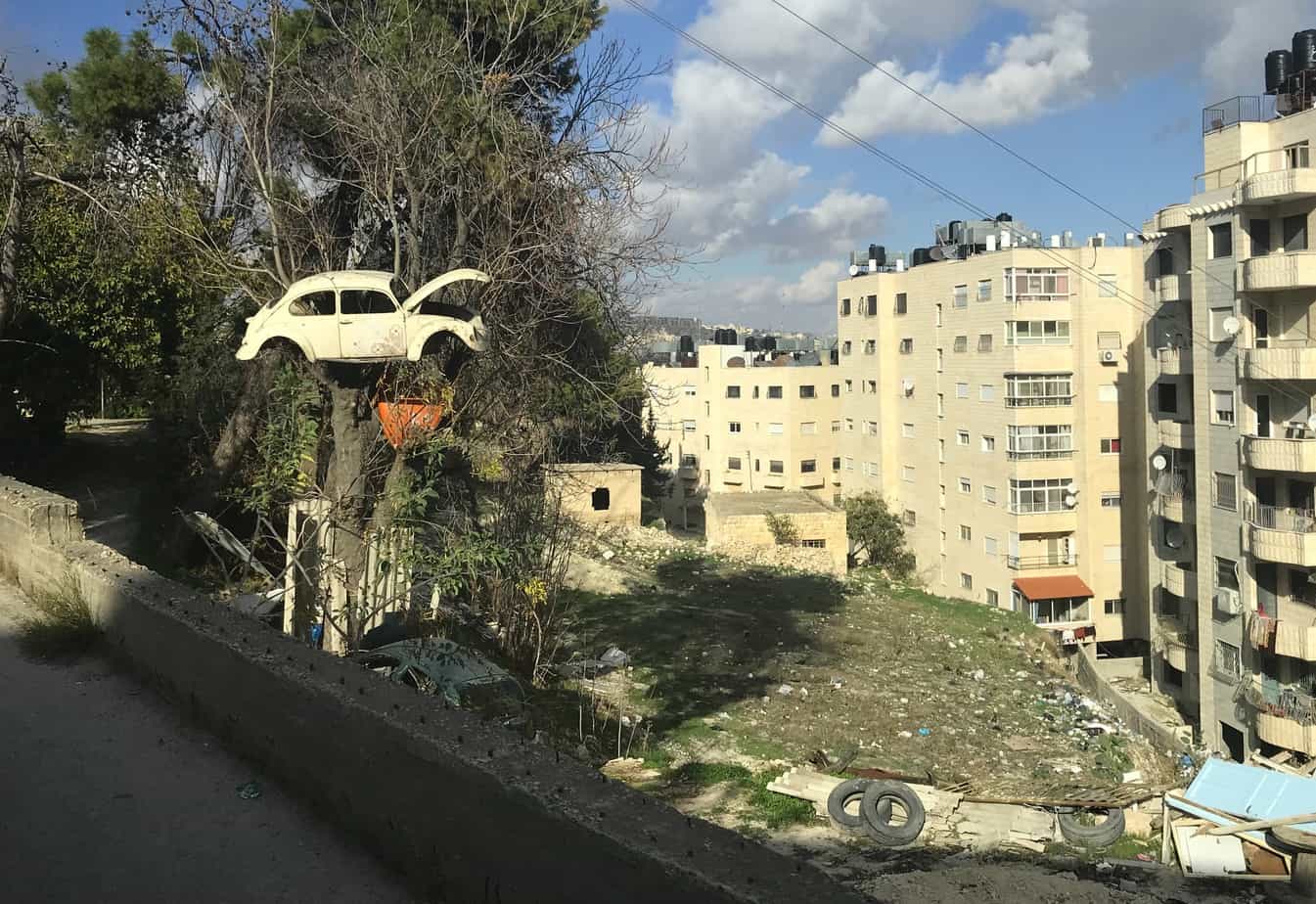 Bethlehem was busy with people setting up for the turning on of the lights that would happen that night (unfortuantly we wouldn’t be staying late enough to see it happen). 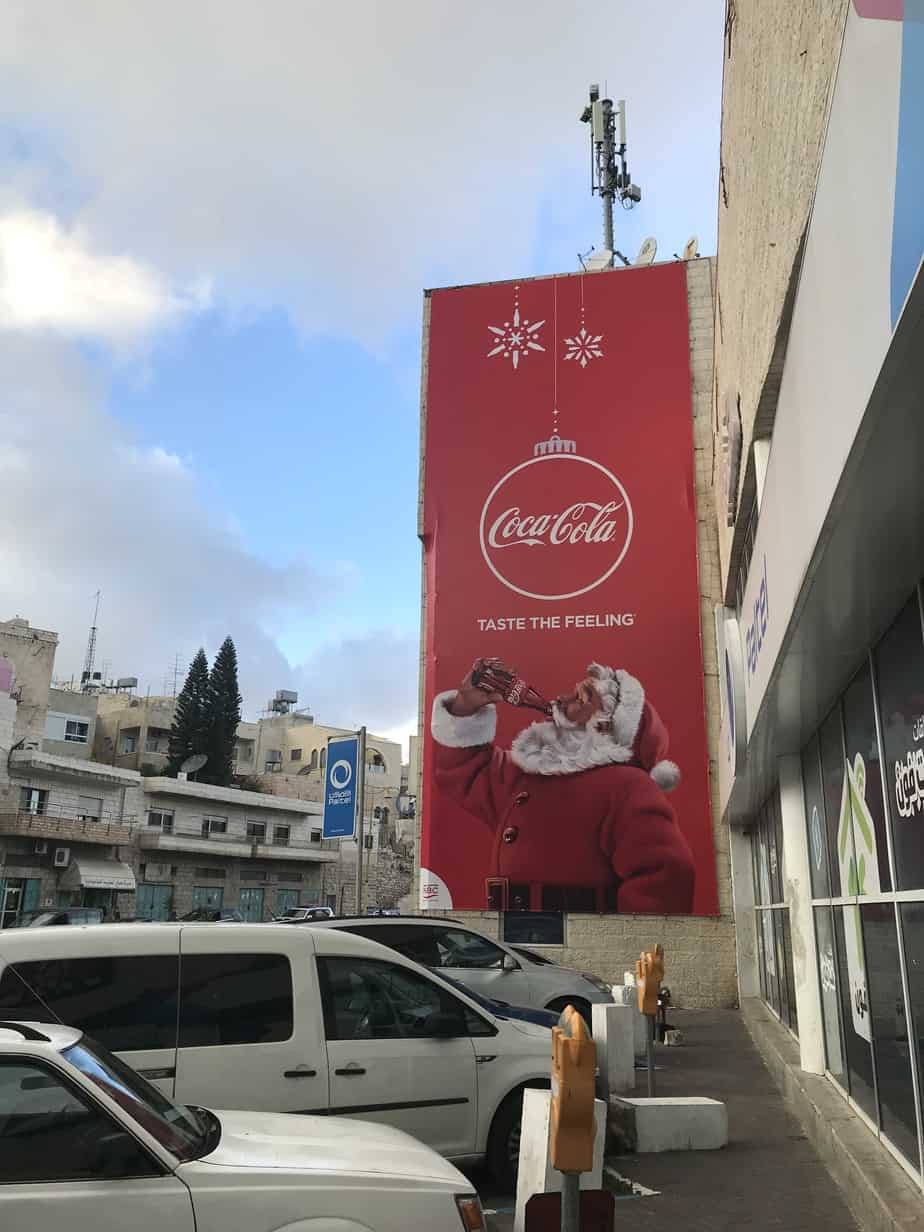 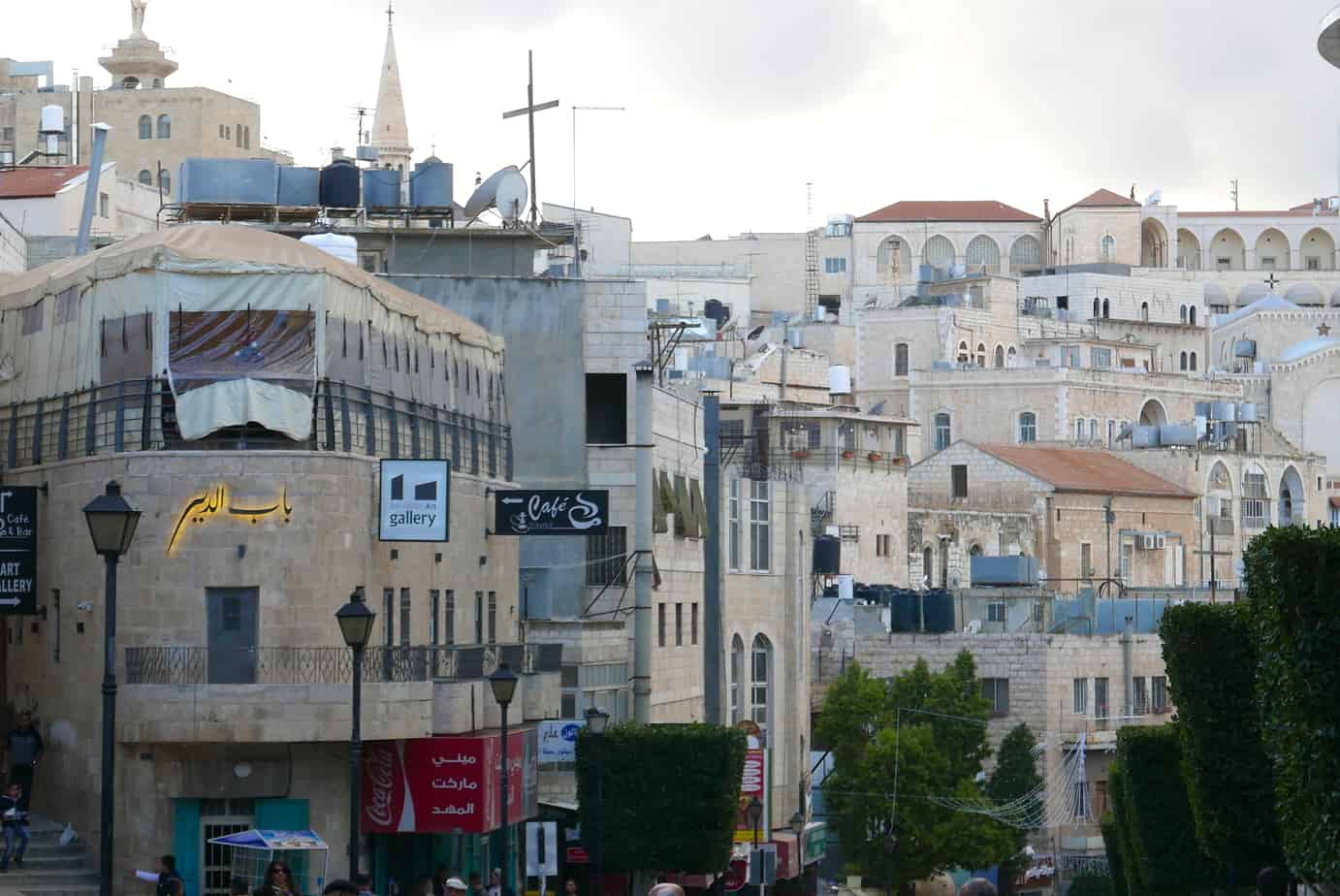 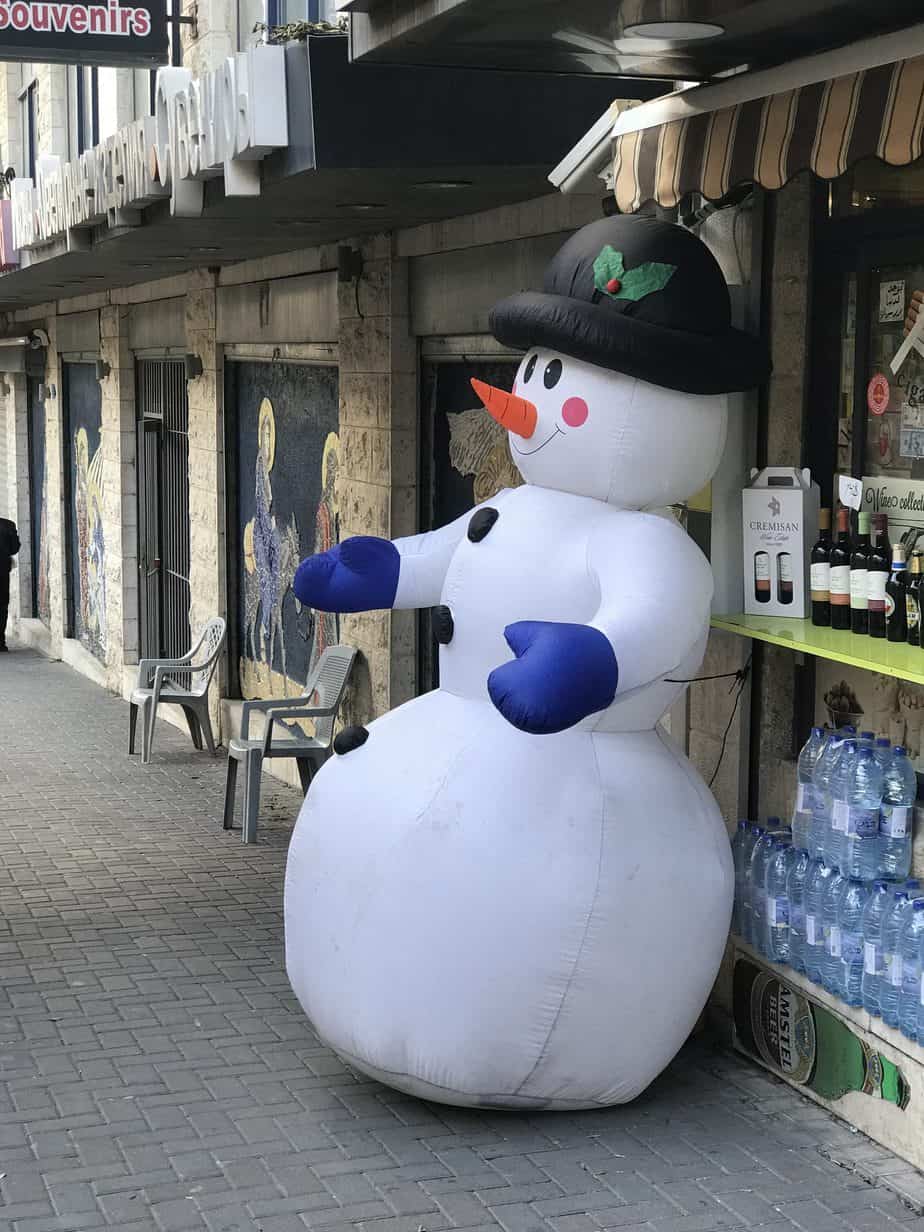 The biggest attraction in Bethlehem is The Church of Nativity – the place where Jesus was born. To enter the church you must duck through a low door. This makes everyone bow so they are equal before Jesus.

The atmosphere inside was tense. Different religious denominations control the church and on such a significant day they have timed schedules and strict rules on who can use the church when and what areas. We joined the queue to enter the place where Jesus was born but eventually decided to give up as arguments amongst monks and priests broke out and it seemed we would never be allowed to enter.

Despite not being able to view the spot, it was fascinating watching the tension unfold and hearing the sing-song prayers.

This is the church where you see Midnight Mass being broadcast from on Christmas Eve from Bethlehem!

To finish off the tour we stopped at the infamous Wall to visit the artwork put there by Banksy and other local graffiti artists. 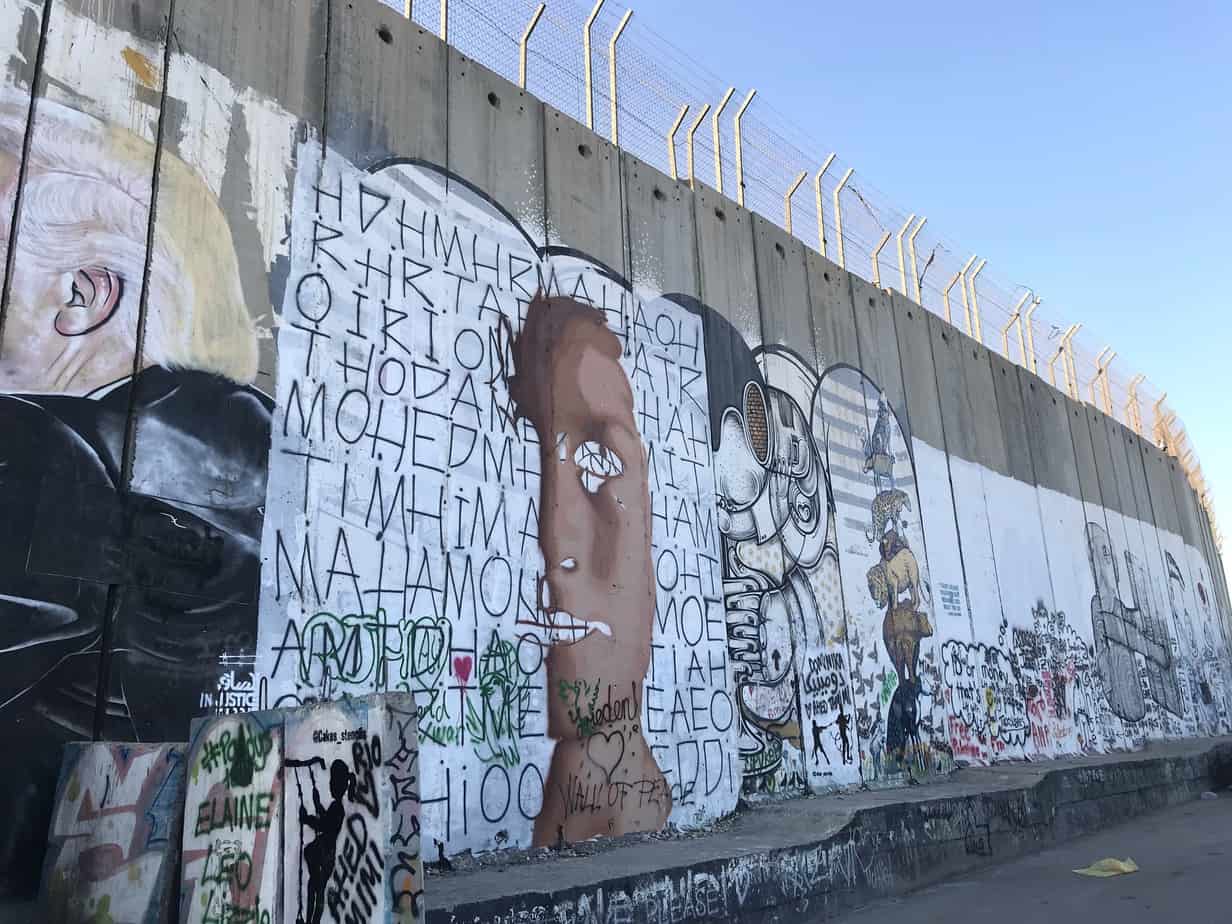 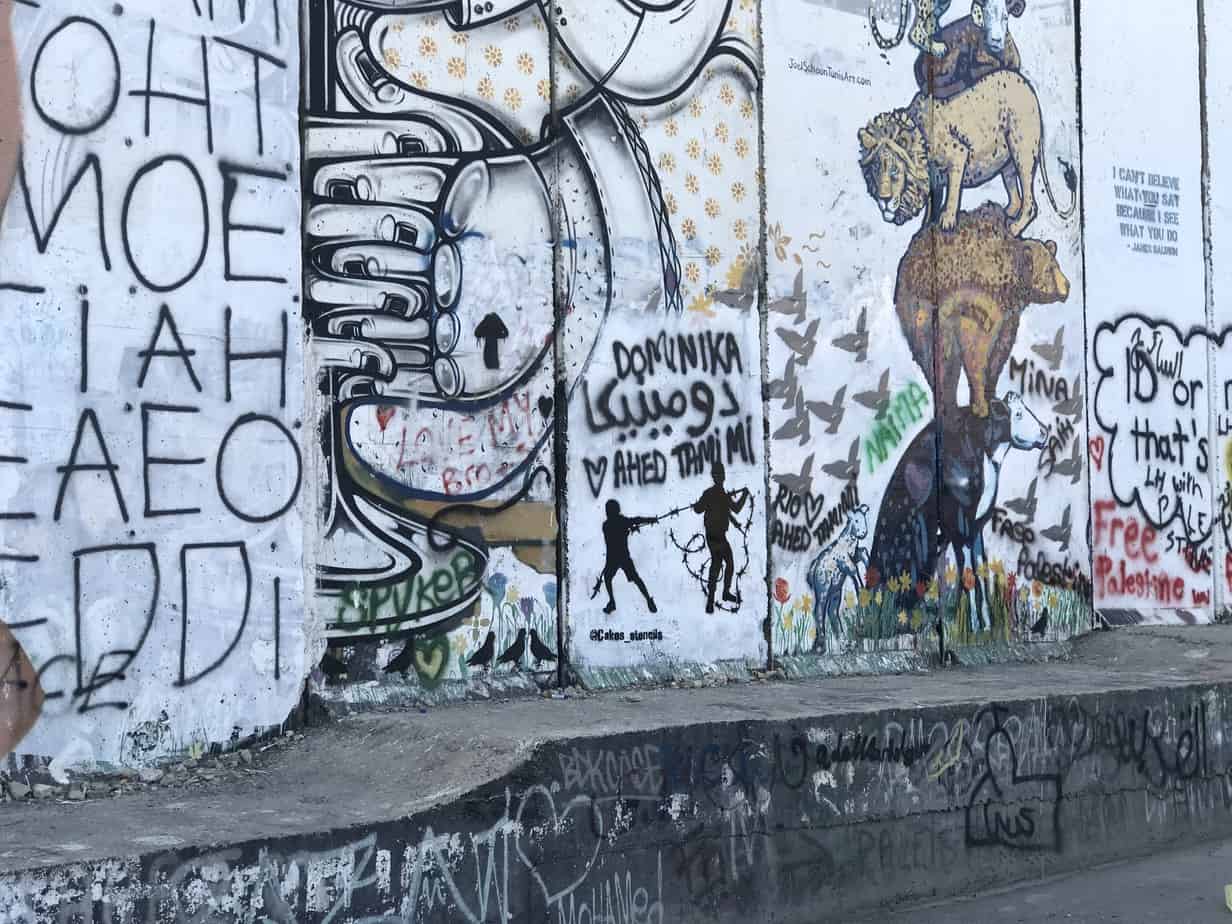 It had been a long day and we’d seen a lot. On the drive back to Tel Aviv I nodded off watching the sunset as we entered into Israel, briefly showing our passports at the security check before being allowed back in.

Visiting the West Bank…was it worth it?

Our tour guide clearly had an agenda. However, he was a good-humoured family man and I enjoyed hearing about his life and tour guiding career.

At times I felt uncomfortable with what I saw. Mostly when we saw the wall. The Israeli army presence and the sinister concrete, barbed-wire wall is a hard reality to swallow. Our tour guide shared heart-wrenching stories and how he feels like the people have given up hope – is there anything worse? he asked. As he was sharing his viewpoint though I glanced up at the graffiti on the wall behind him. A tribute to a young Palestinian hailing him a hero…..a suicide bomber who’d killed Israeli’s (including children) in an attack on a bus targeting innocent people.

There is no one side or right side in this story.

I’d braced myself for the internal conflict. By the end of the day, my opinion on the situation hadn’t changed much. But it was still an amazing experience and important to hear different viewpoints.

What I really took away from the day was not politics but a new perspective on the West Bank. There is so much to this place beyond just war and it’s a shame that we don’t celebrate this side of the country. In the short time I was there I saw some of the most fascinating and historically significant sites I’d ever laid eyes on. Met strong-minded but friendly people. Ate delicious food and admired impressive artwork.

The place deserves to be so much more than just a conflict zone.

How to visit the West Bank

For your first time to the West Bank, I would really recommend joining a tour. Now I’ve been once I would feel confident travelling to the West Bank independently, but am happy I did it with a group first to get a feel for the place. 1 day is a short time to everything but the ‘Best of the West Bank Tour‘ allows you to see the top sites.

The ‘Best of the West Bank Tour‘ costs $102 and leaves from either Tel Aviv or Jerusalem. To join the tour you will need to bring your passport and need to dress conservatively to enter the religious sights (covering elbows and knees).

I joined this tour for free in exchange for writing a review about my experience. My views are 100% honest.