4.30am is a really early time to get out of bed. But my excitement cut straight through every ounce of tiredness in me!

After throwing on all the layers I had with me and double checking my camera was fully charged, I made my way to the reception where my pick up was already waiting. The minibus zoomed around the town collecting another 12 sleepy looking tourists before dropping us all at the Kapadokya Balloon office.

We all handed over 100 euros, were given a safety briefing card to read and ushered into a cozy room where we could help ourselves to some breakfast.

Chewing on my Cornflakes, I mulled over the safety briefing. It showed how to enter the balloon as well as the safety landing position which you must adopt if instructed. Landing. I hadn’t even thought about how you land in a hot air balloon and the image, showing the basket falling to one side and all the passengers squashed up in the ’safety’ position, didn’t exactly look promising. I suddenly felt a little nervous. 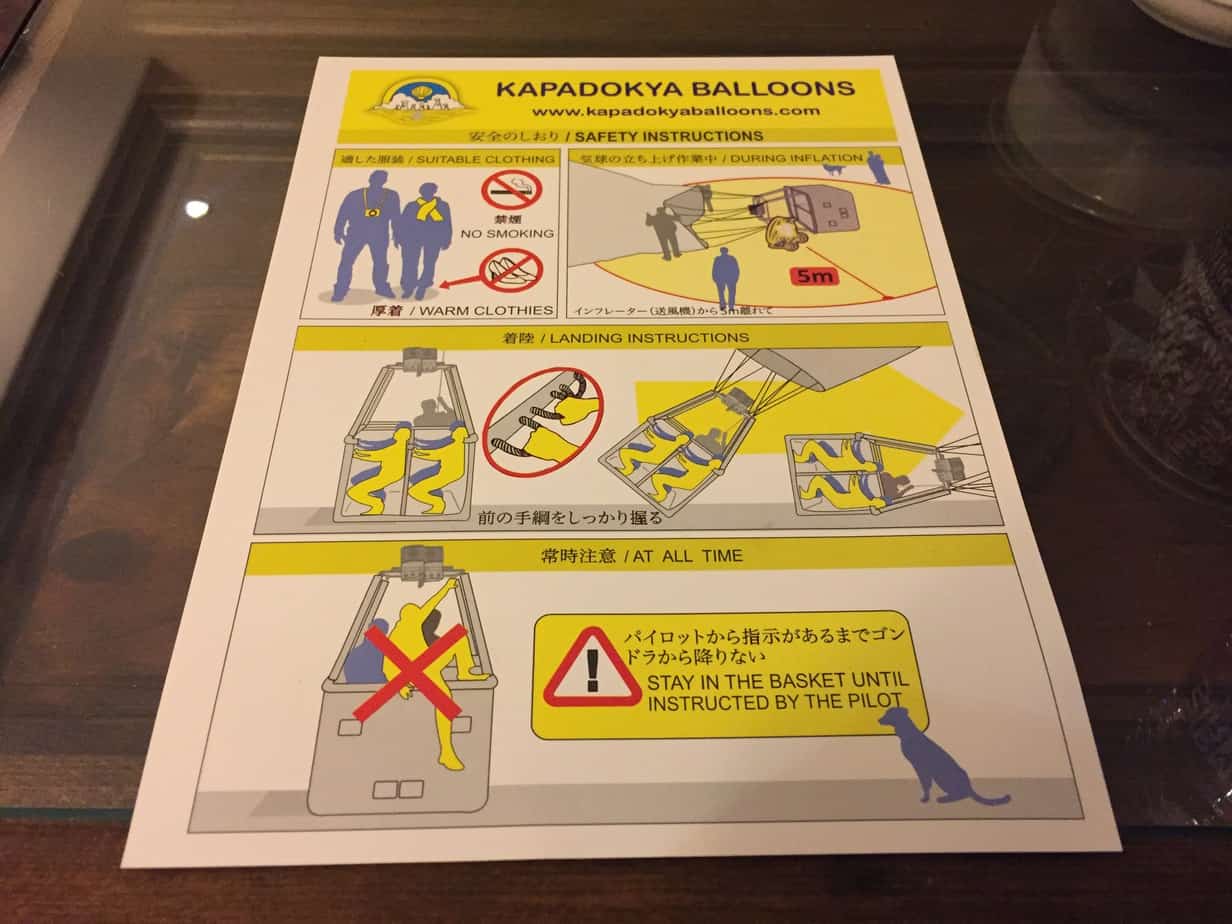 Just as I was wondering when we were going to be leaving, a guy came into the room and led us all into mini-vans which took us to a dusty flat field.

The hot air balloon basket had been tied to a Land Rover and the balloon section had been unrolled and was slowly being filled with air using big fans at first and then flames.

In no time the huge balloon was towering above us and our group was told to climb into the basket.

(top tip…stay at the back of the group so you will be last on – you will then be in the corner which gives you the best spot in the balloon!!!!) 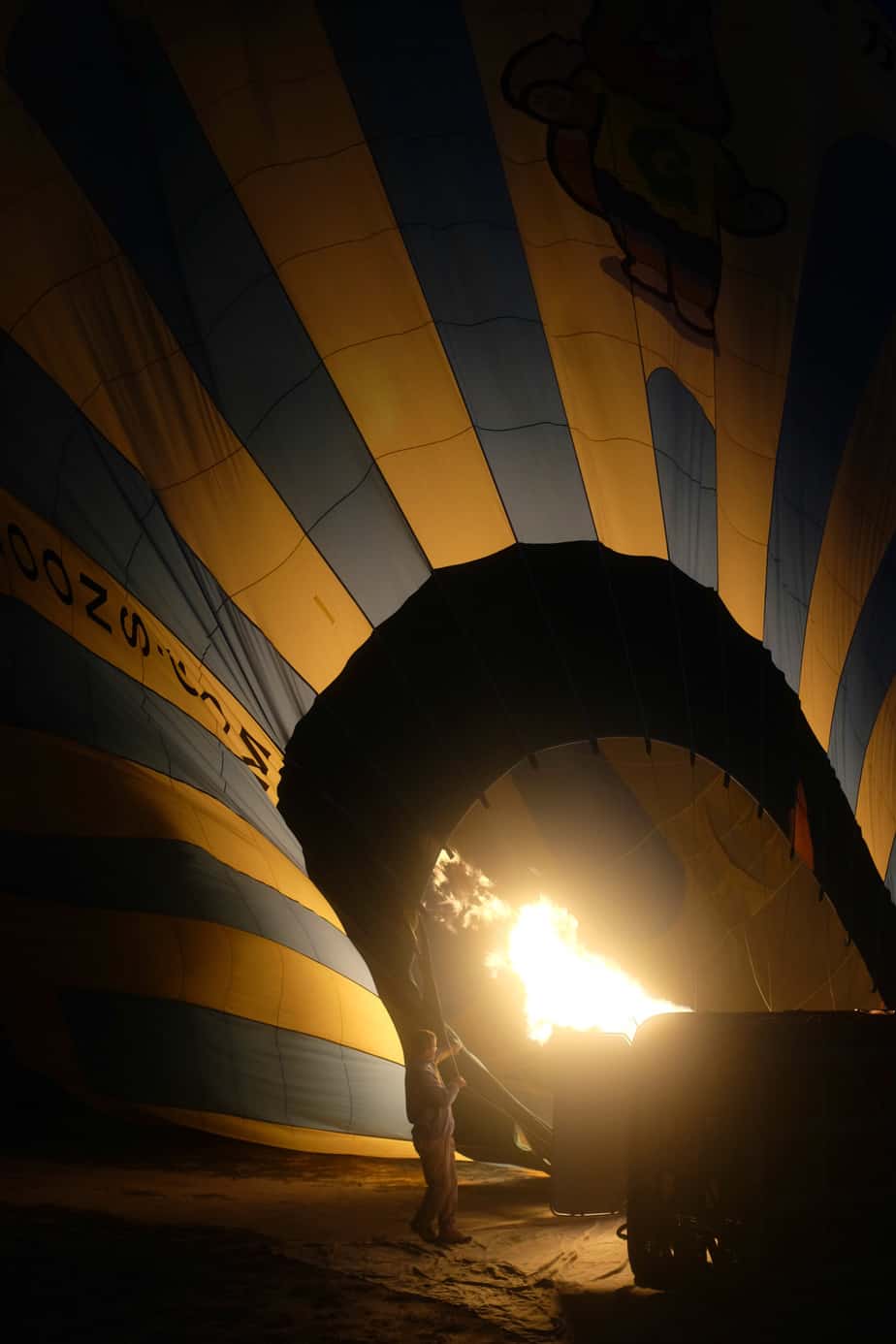 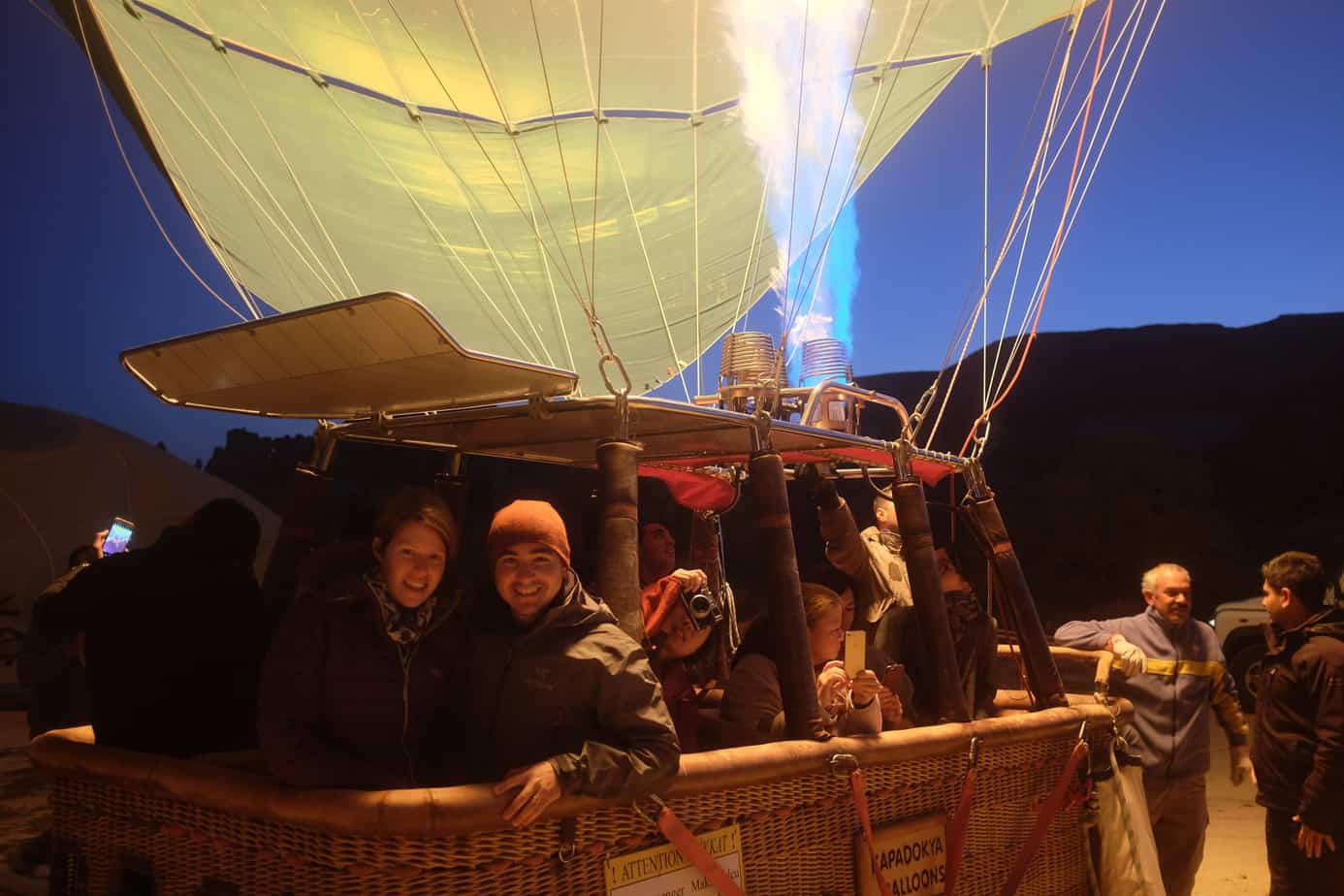 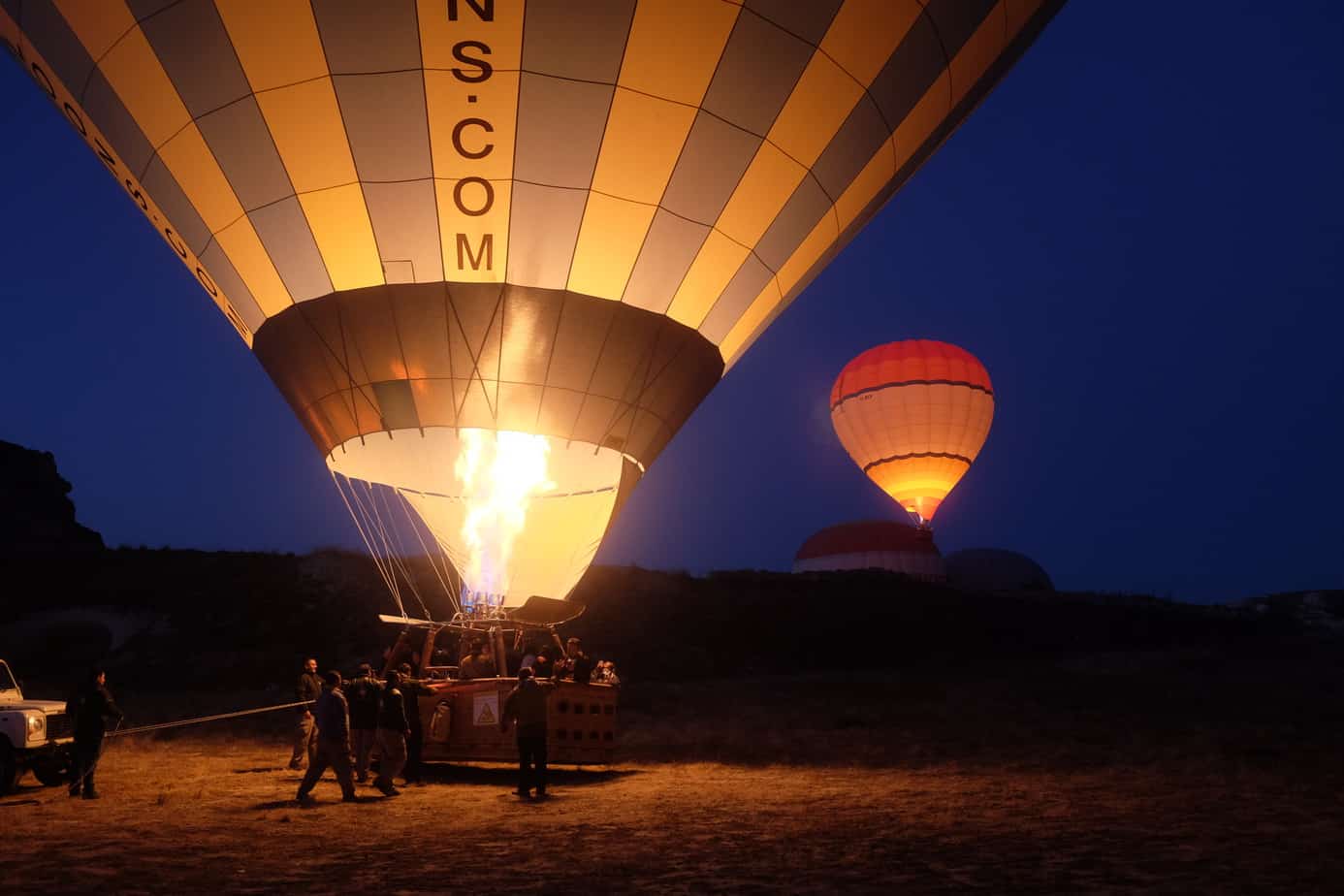 The guys on the ground undid the ropes and we slowly began to float upwards into the dawn-lit sky. It was a strange sensation seeing the ground move further away from under my feet in such a gentle motion.

I looked up into the belly of the balloon in awe of how this large bit of plastic and a bit of gas could keep us floating. 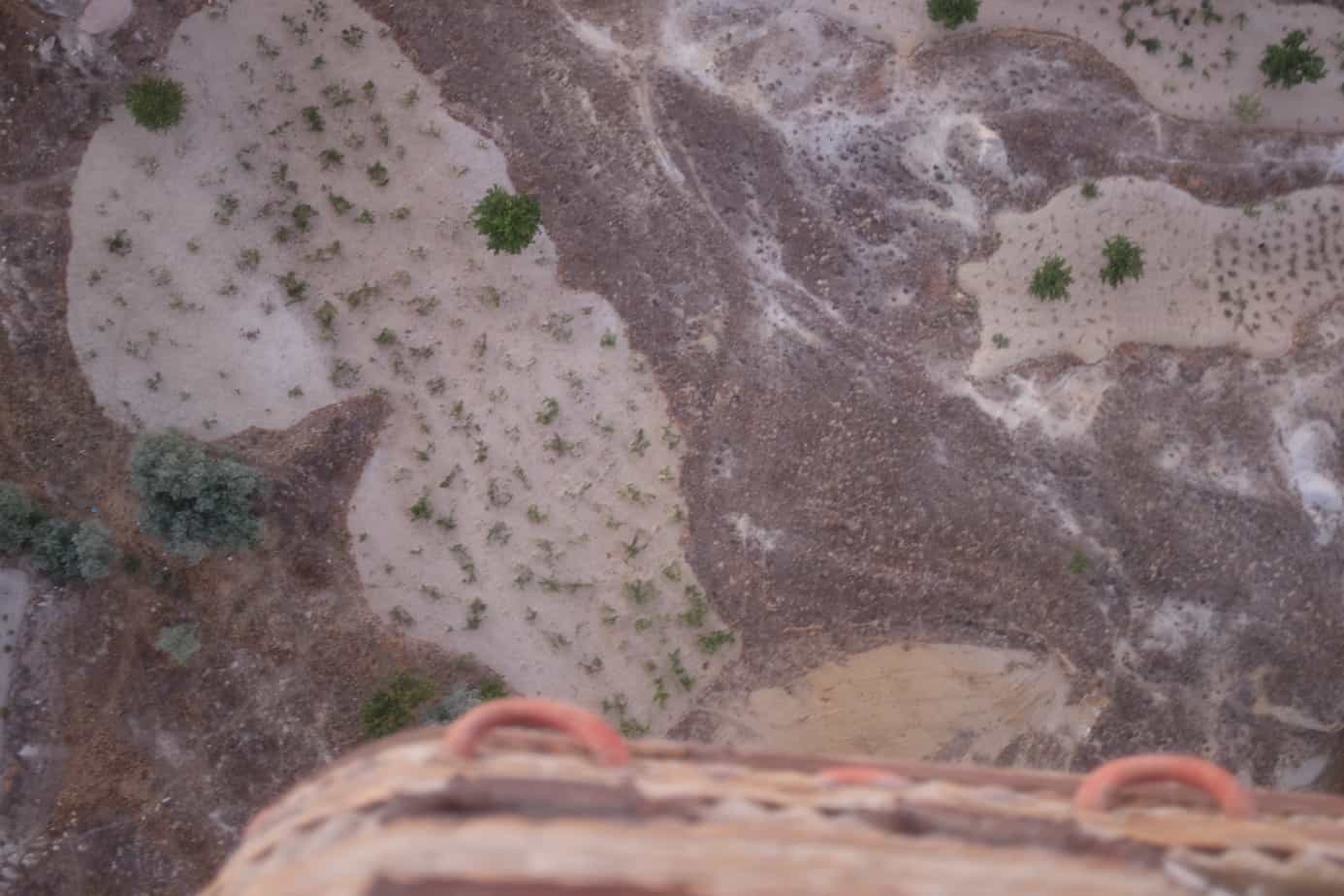 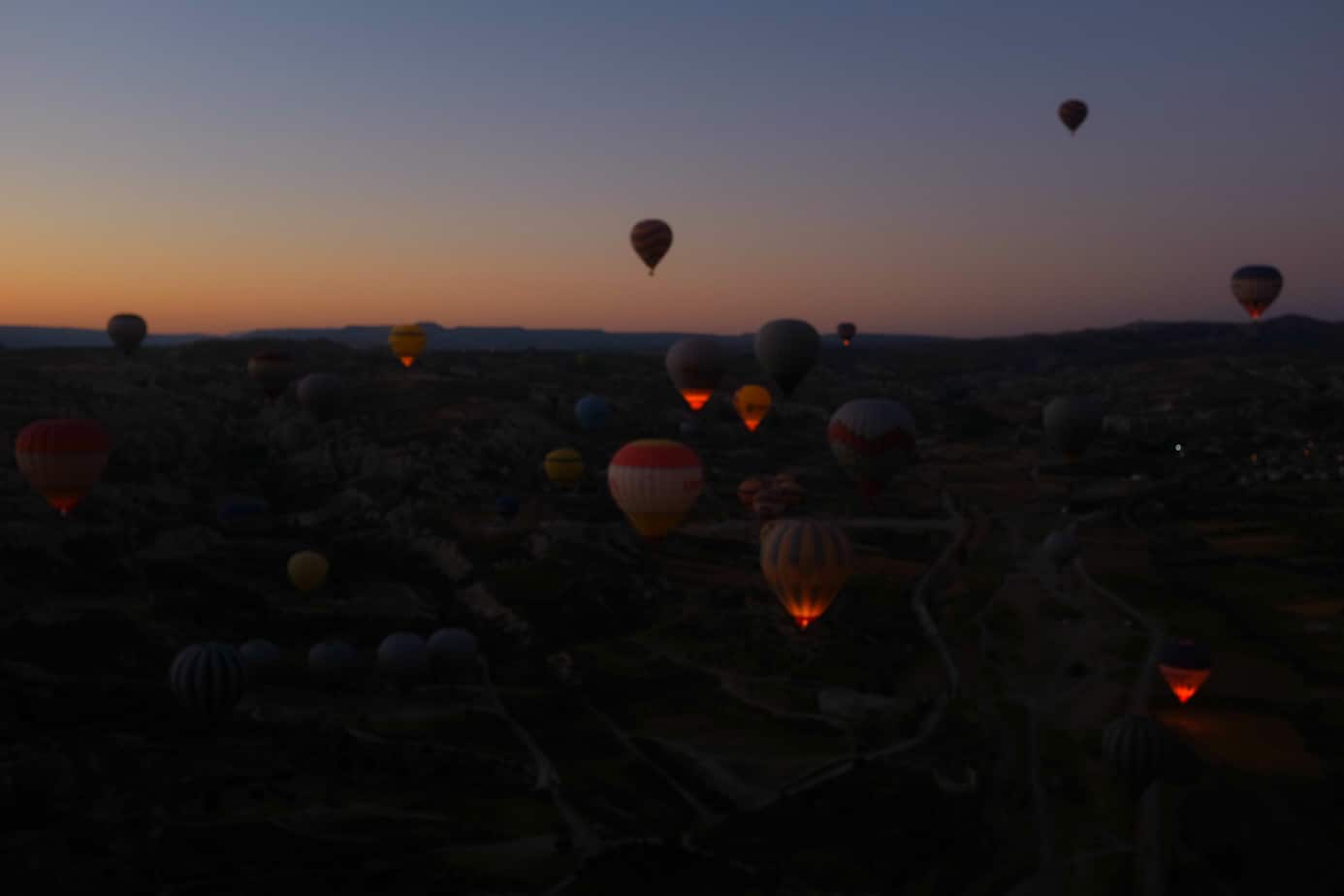 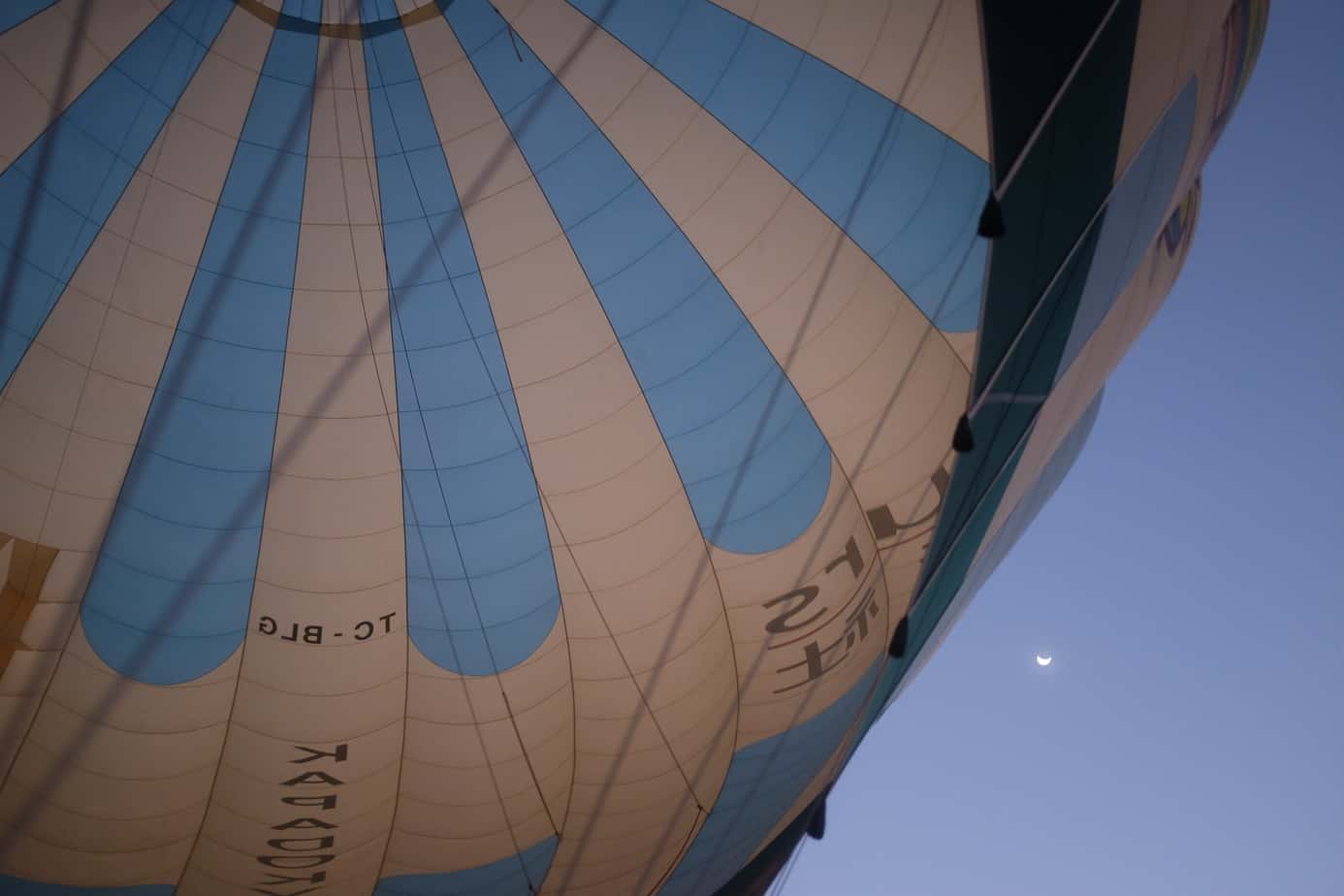 We soared up over the trees and then up past the mountains.

I had seen pictures of Capadoccia online but, as I arrived the night before in darkness, this was the first time I was able to take in the landscape properly.

On one side was the Rose Valley and it’s pink tinge and winding formations. On the other was the famous pinnacles, precariously sat in the valley. You could make out the town and all the houses that had been built in the caves.

The view was made even more magical by the 40 or so other hot air balloons that floated around majestically. 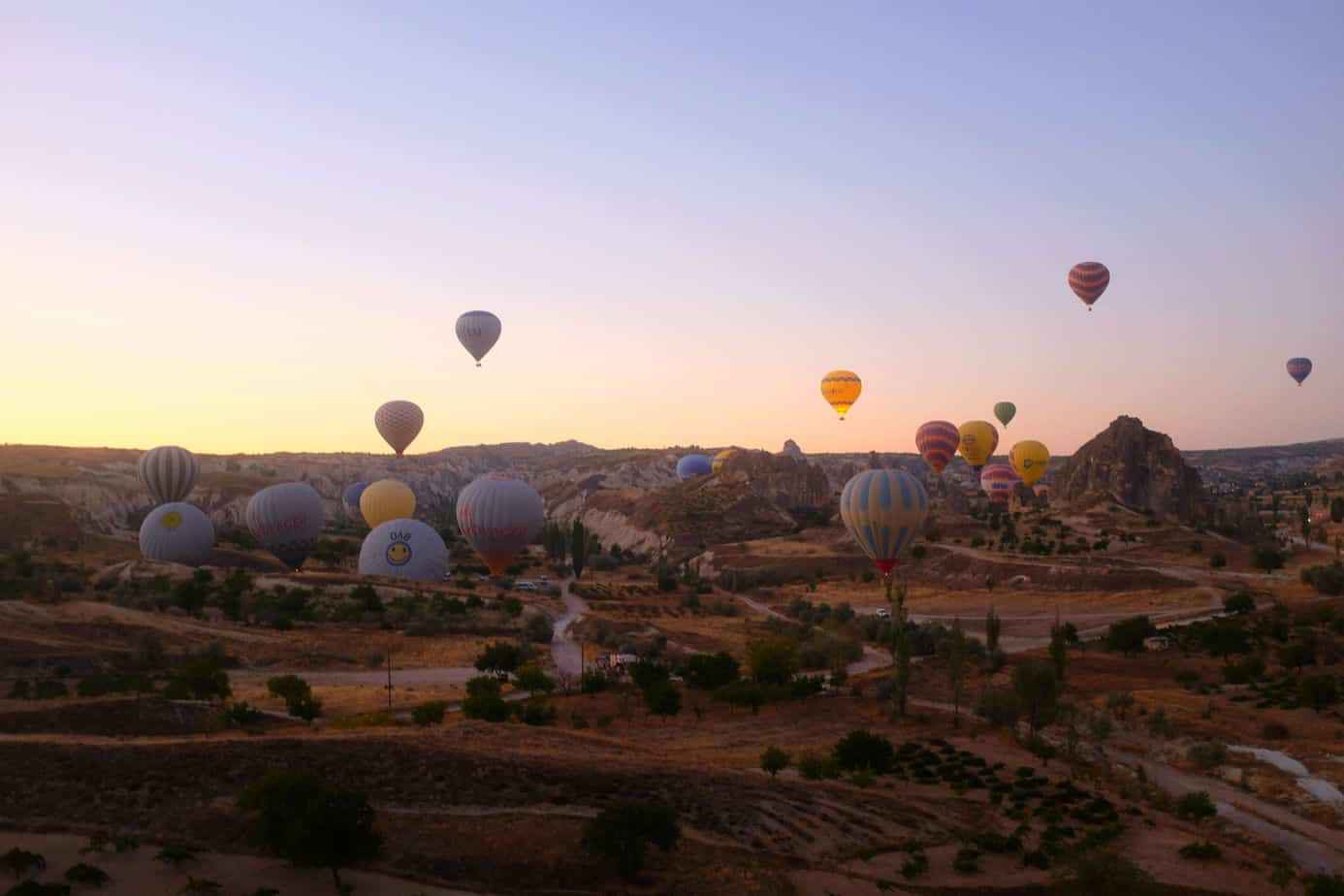 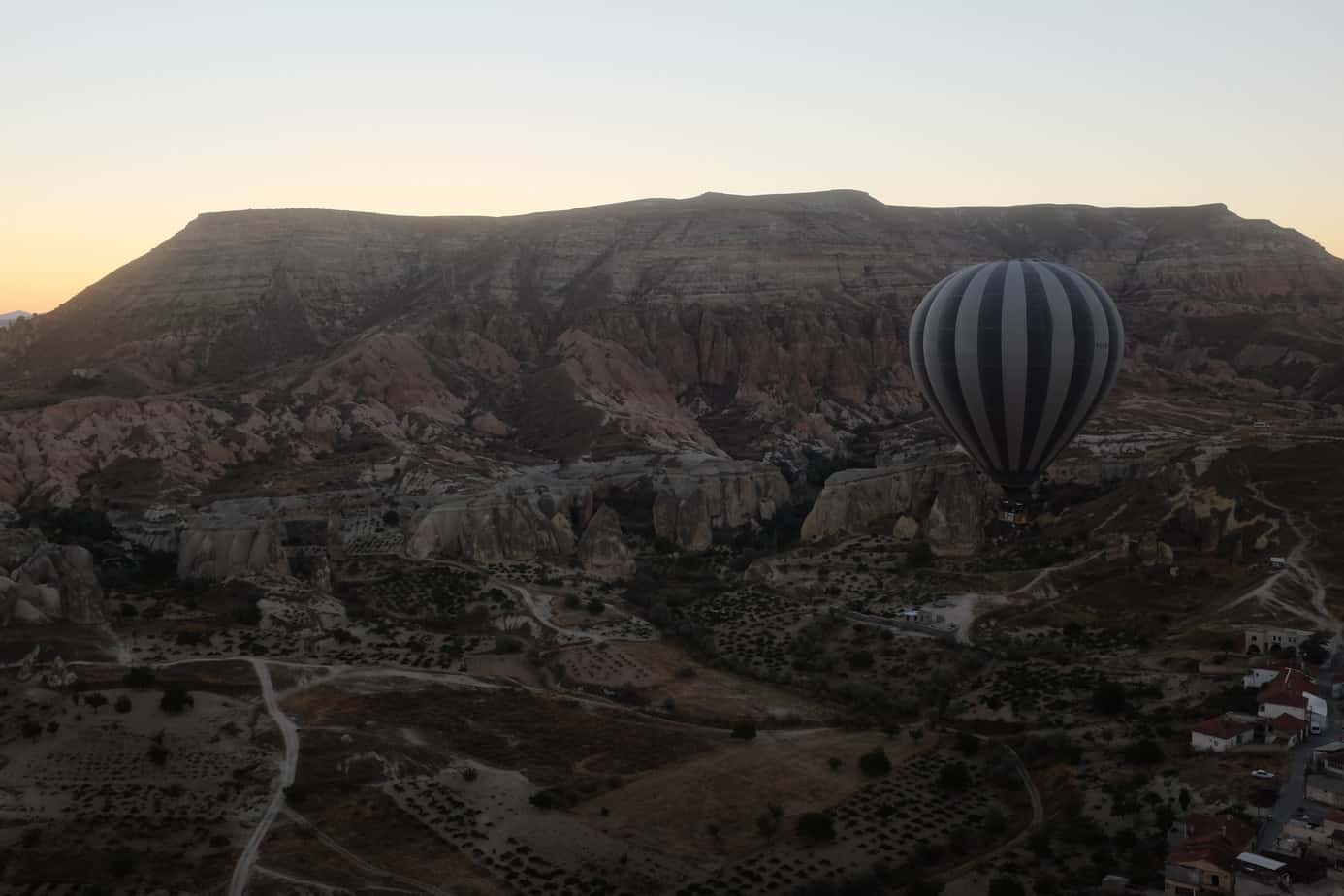 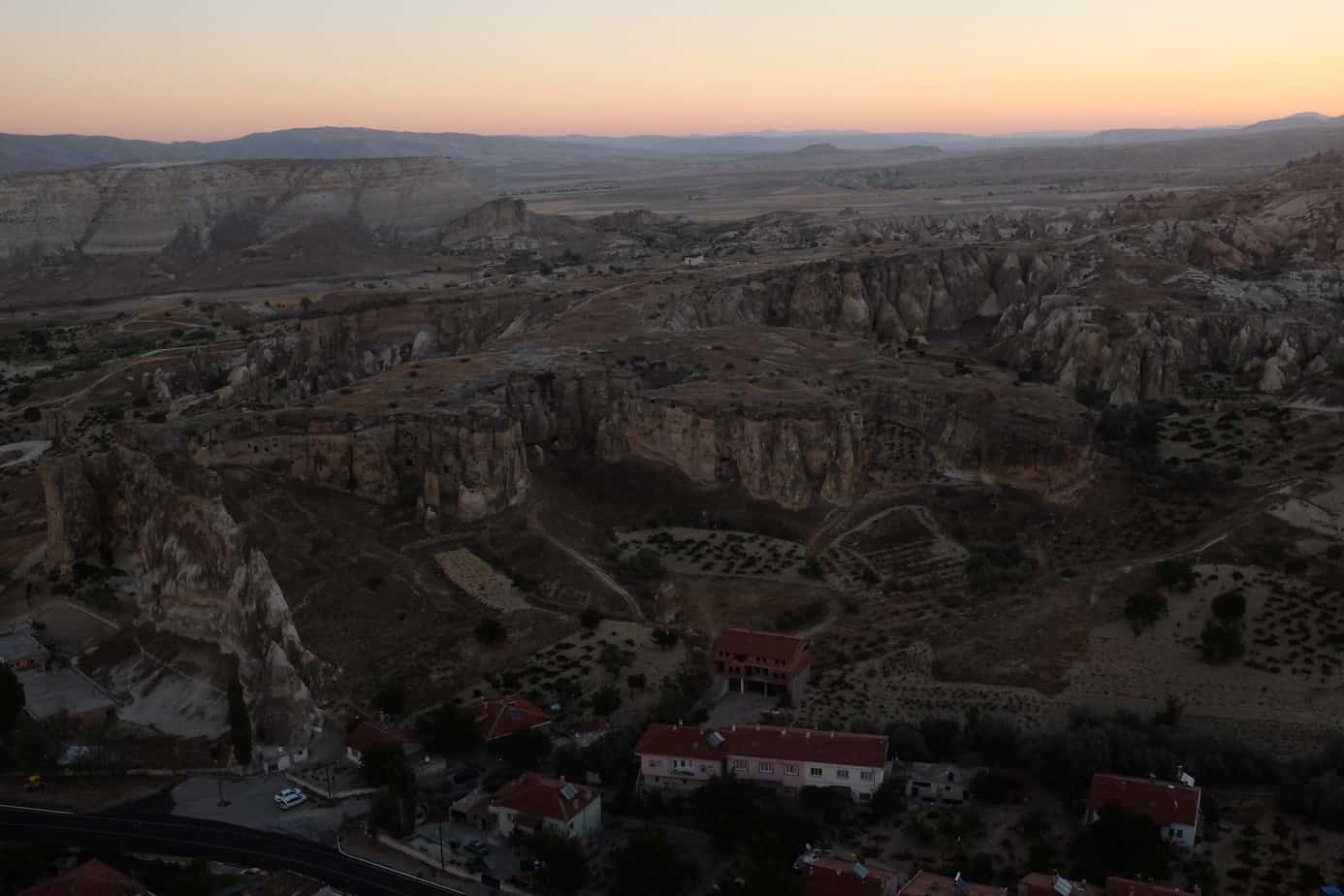 The sun popped up behind the Rose Valley revealing rivers and towns in the distance, as well as the snow, capped Uludoruk mountain, Turkeys second highest peak. 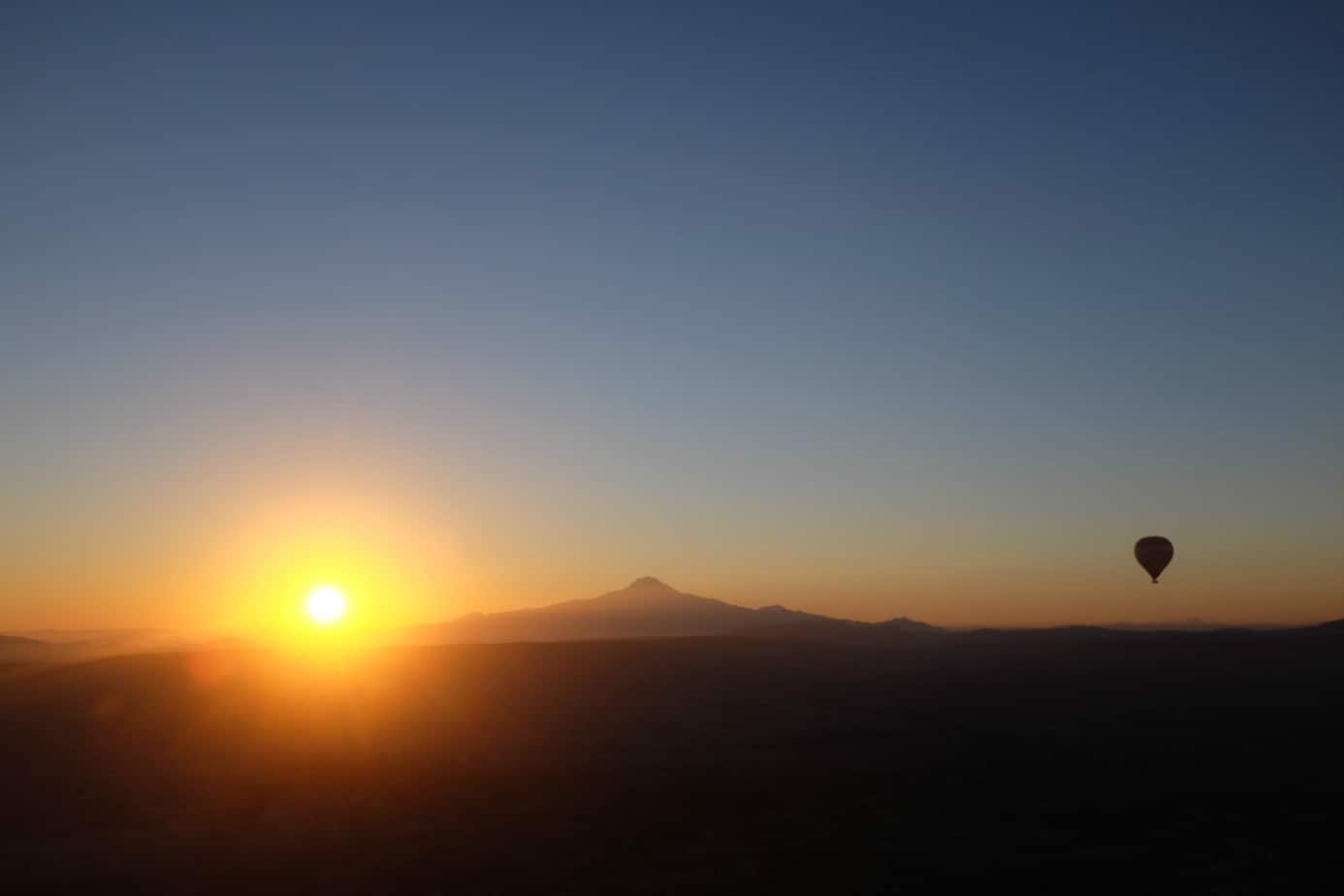 Apart from the occasional roar of the flames that kept our balloon afloat, there was nothing but silence as we floated up and down around the area, letting the gentle wind decide our direction.

Our group barely said a word. It somehow didn’t seem right to break the silence and stillness around us. 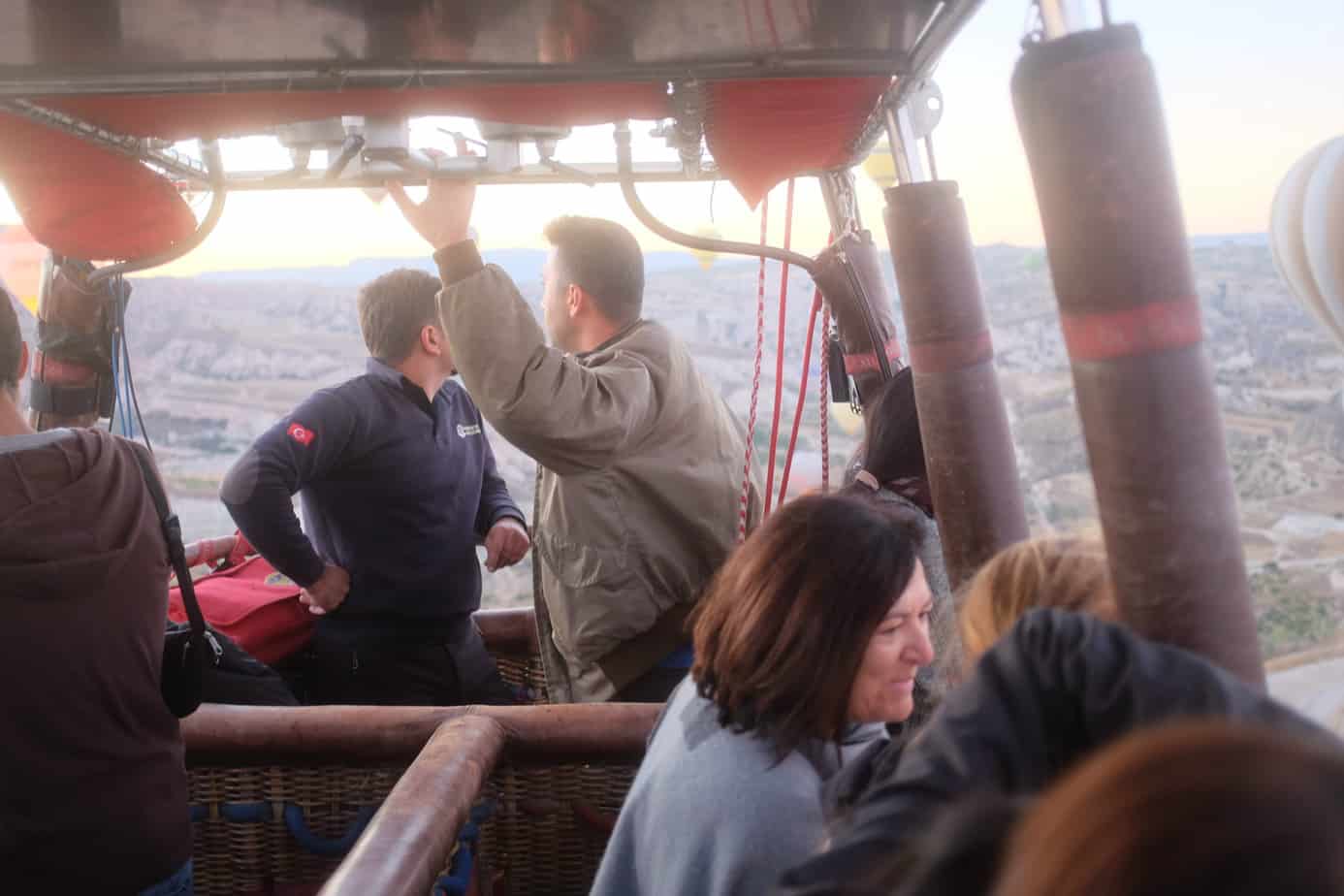 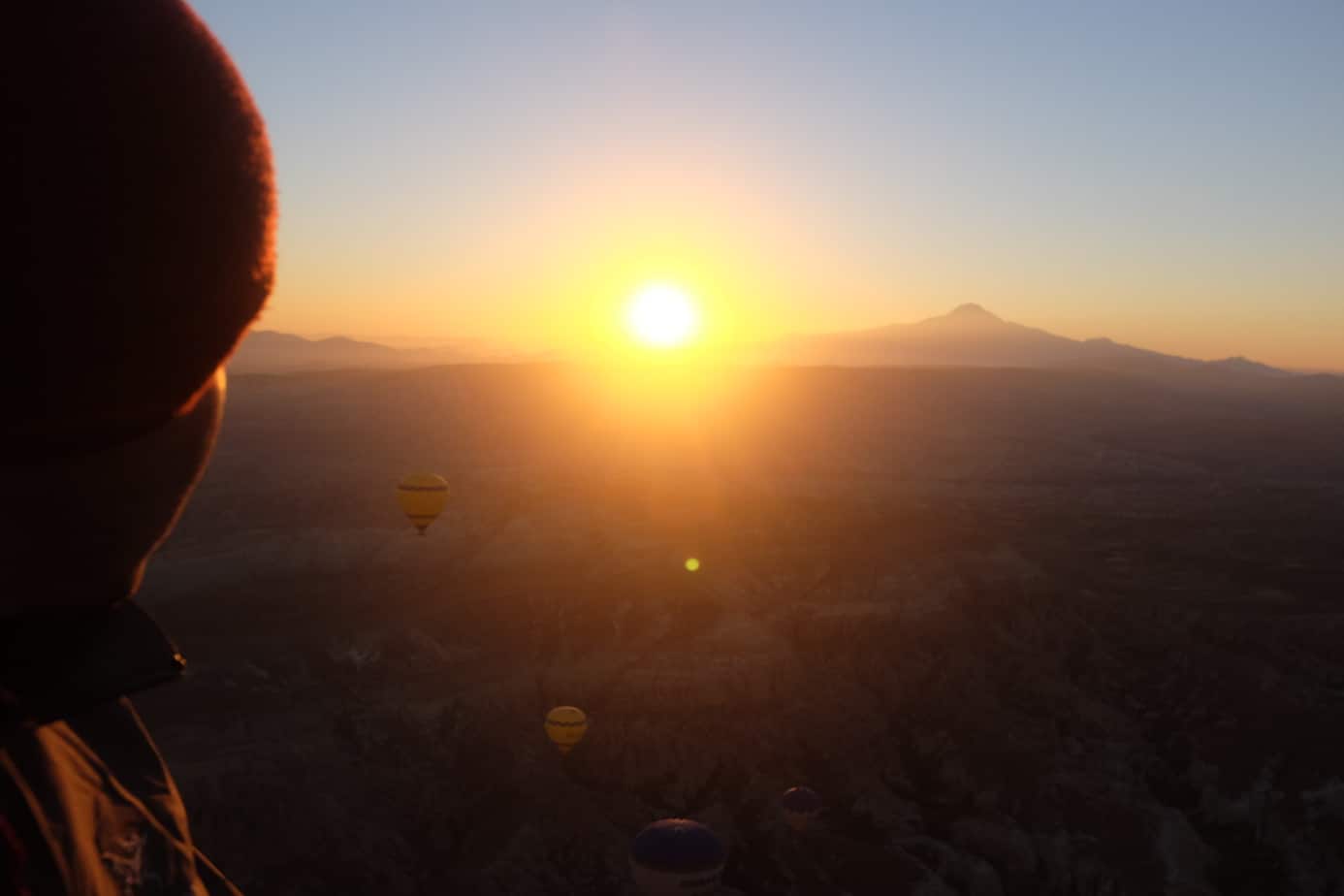 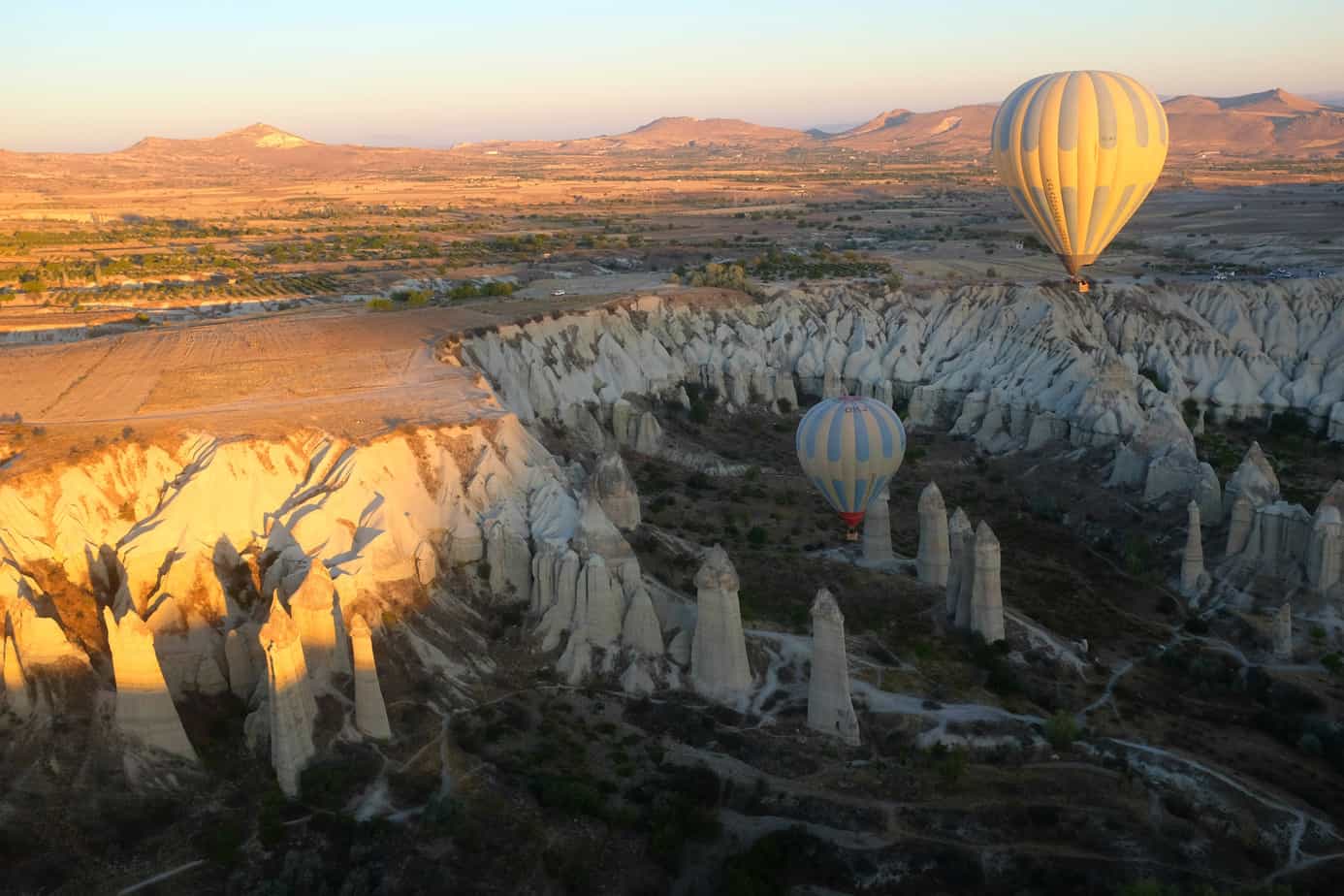 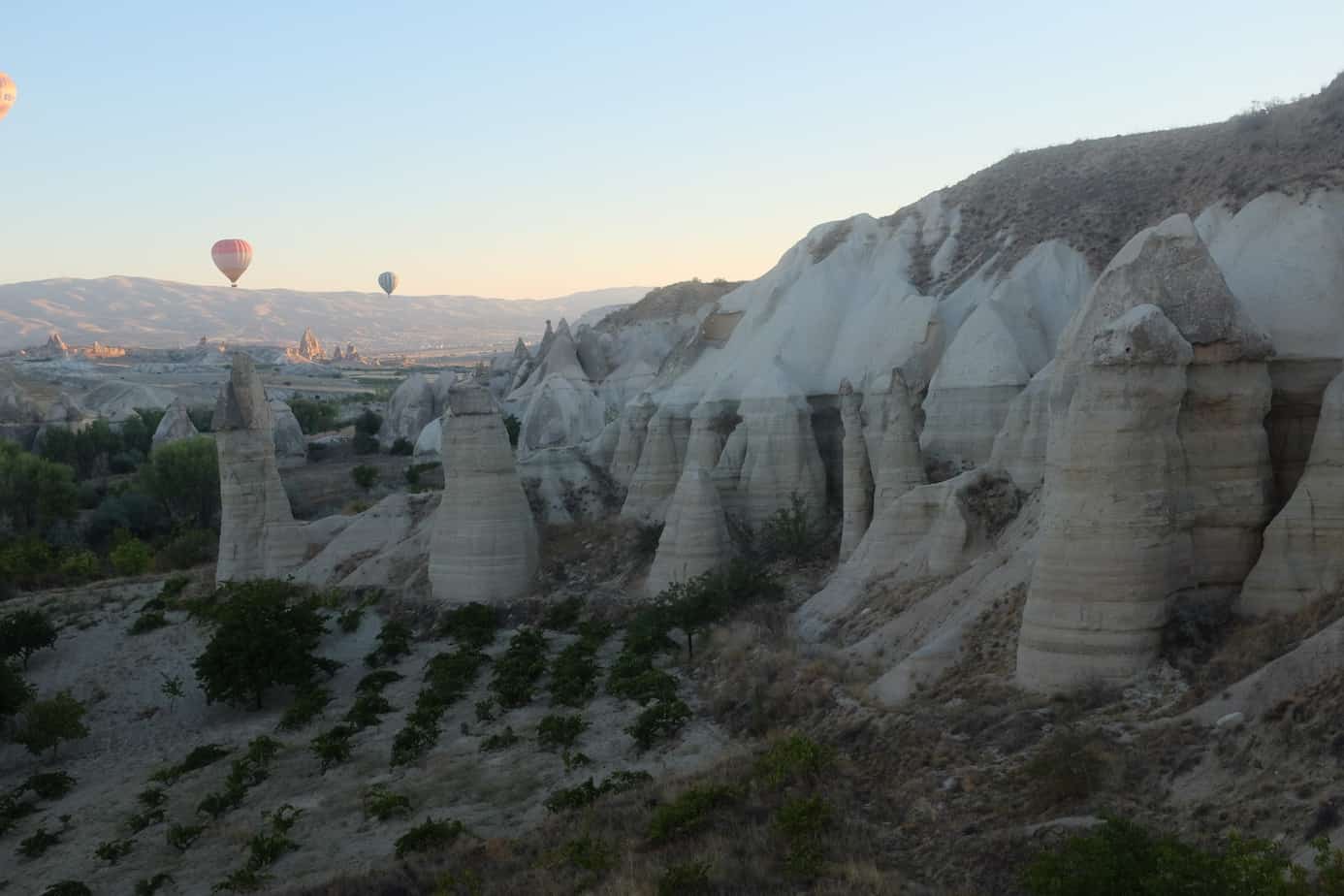 The flight took an hour which was a good amount of time. The 2-hour option would have been too long.

Top tip: take as many layers with you on the flight as you can

Despite the layers, the cold was starting to get to me. As we came into land, I spotted our Land Rover driving around the ground below us. I began to prepare myself for what I thought was going to be a bumpy landing.

When we were about 5 meters from the ground the Land Rover reversed so that its trailer was directly under the basket. Some men jumped out, grabbed onto our basket and literally lowered us straight onto the trailer with such smoothness that I had to look down to double check that we had actually landed.

It turned out that mentally re-enacting the safety landing position had been a waste of time! 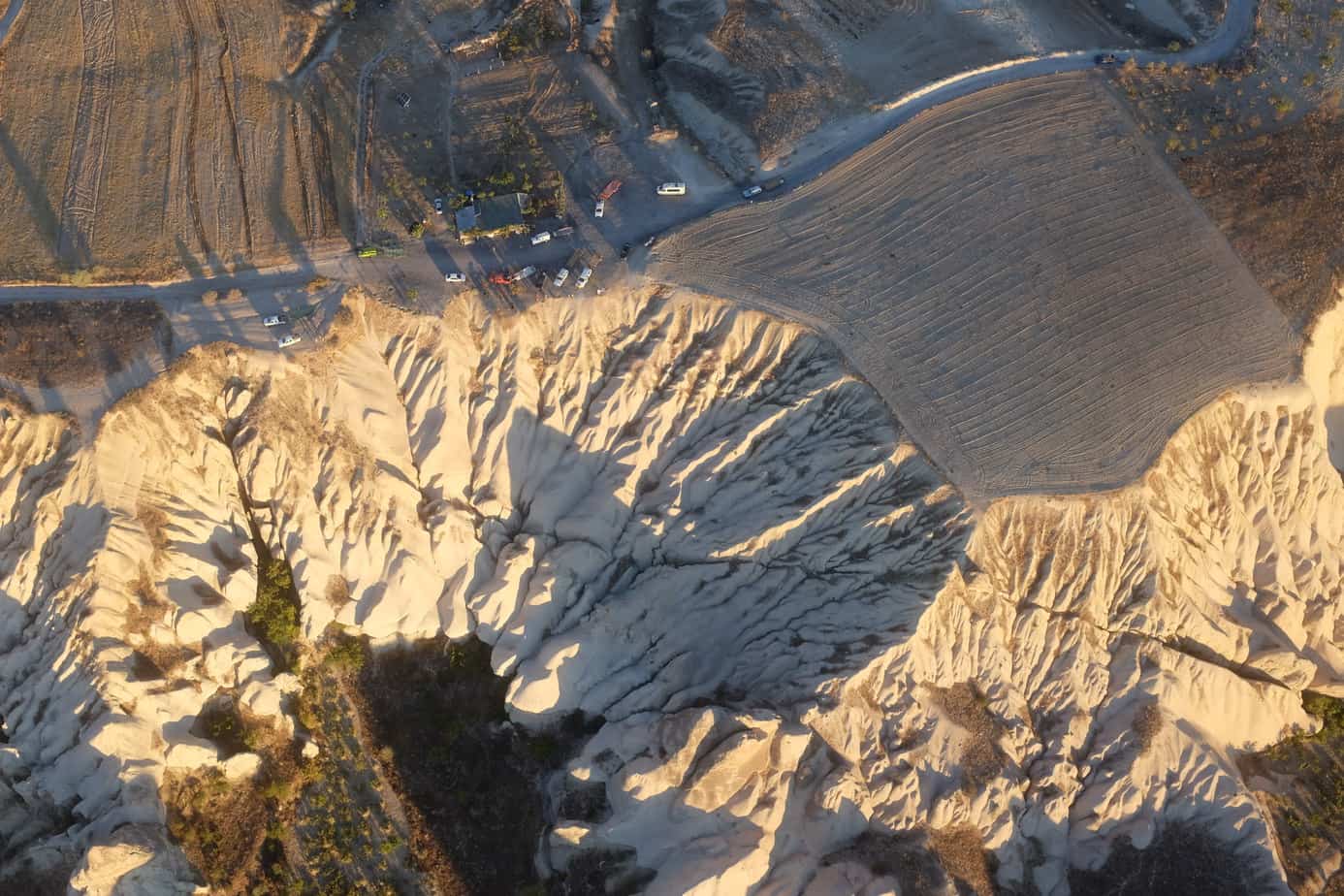 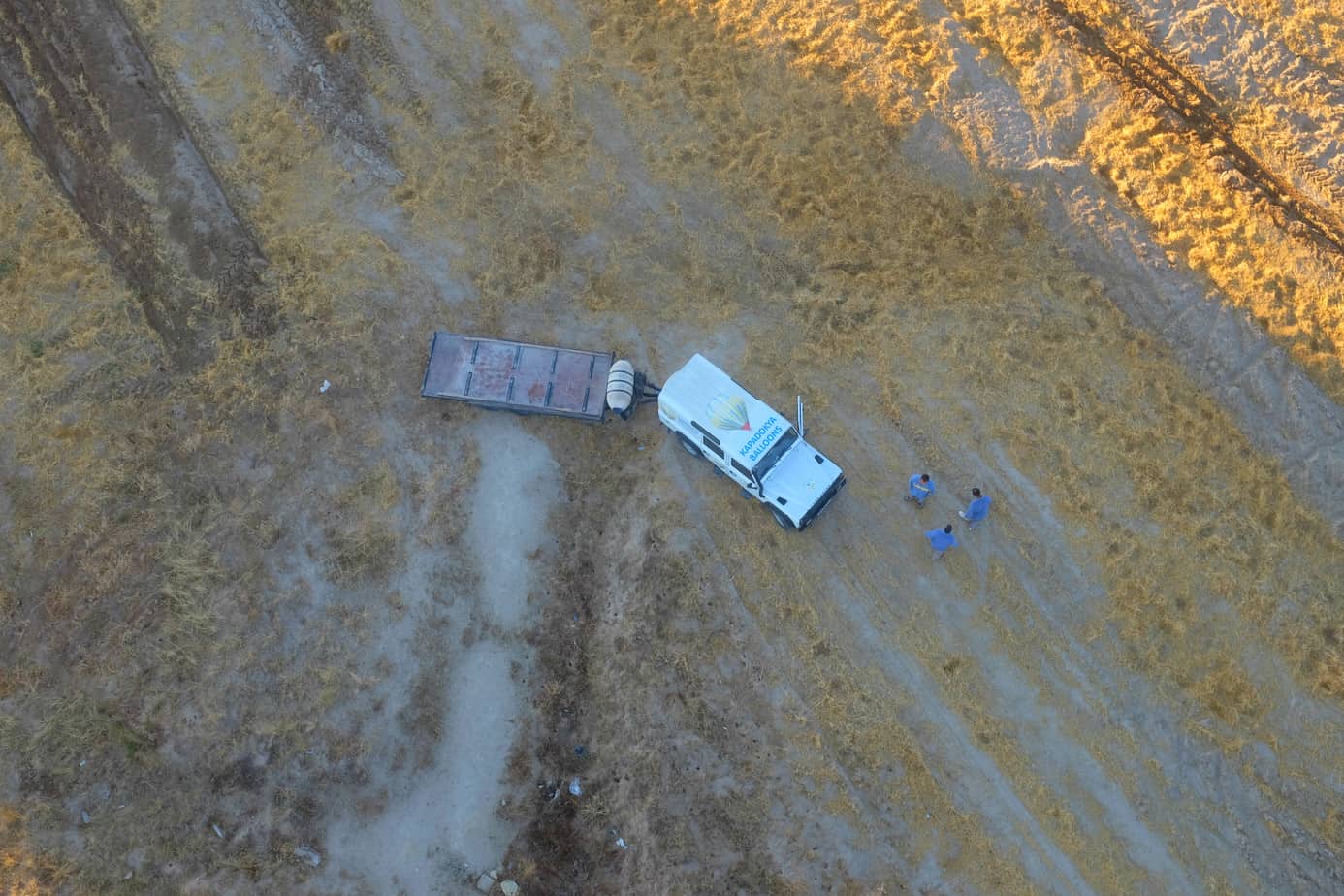 Hot air ballooning in Cappadocia is not cheap at 100 Euros. You can find cheaper flights at around 80/90 Euros but you will compromise on group sizes as they take up to 20 people – these Hot Air Balloons looked really cramped.

For 140 Euros plus you can have a smaller basket of 4 or even a private flight.

I don’t think the extra money would be worth it and felt that the size and price I paid was the best option. It is defiantly worth the expense without a doubt and is one of the most unique experiences I have ever had.

We booked in advance which I think was a mistake. I’m sure we could have haggled some money off if we’d waited until we’d got there. Unless you are going in peak season there isn’t going to be any shortage of balloon spaces! If you found this blog helpful, follow me on Facebook, Twitter and Instagram. Or you can subscribe to my YouTube channel. I give all my advice out for free on my website. If you want to say thanks, you can buy me a coffee! *Any women reading this?* I founded a women’s adventure community called Love Her Wild. Check out our private Facebook page and see what adventures we have coming up.