It was my first visit to Japan. A country I’d wanted to visit for as long as I could remember. This is my journal from my first few days in Japan (for a full breakdown of our itinerary and budget check out Japan itinerary 2 weeks).

You can read the next 2 parts of my Japan diaries here:

I’m terrible with jet lag so the first 2 days were a bit of a blur as I tried to adjust to Tokyo while walking around like a zombie.

My initial impression was of face masks and just how many people there were – even quieter areas were comparable to Oxford Street on a Saturday.

But unlike Oxford Street, everywhere was quiet and calm despite the crowds. 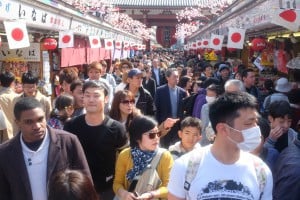 I fell in love with the Japanese culture straight away. The people were reserved, considerate, respectful and unbelievably polite. Even a short exchange buying a coffee involves endless smiles, bowing and at least 5 “arigato gozaimasu” (thank you very much’s).

It’s impossible not to love the locals’ gentle nature and the extent they go out of their way to help. We had one lady run to another platform to check with an information desk when we asked if she knew when the next train was…almost causing her to miss her own train!

Tipping is not common, in fact, it is often considered rude, so all the amazing customer service you receive stems from nothing but pride and genuine helpfulness. 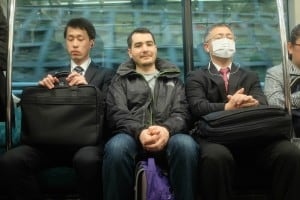 On the first day, we visited the famous Shibuya crossing, followed by a wander in the nearby shopping district ending up in Yoyogi Park where the cherry blossom was just beginning to show. 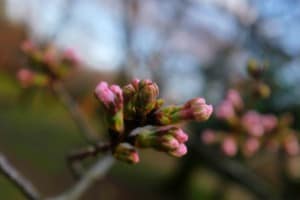 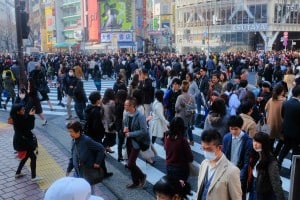 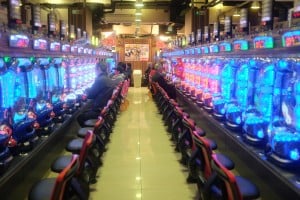 I accidentally fell asleep on the bench while watching the fountains in the park. 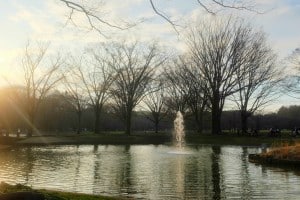 Staying in a capsule hotel

Our first 2 nights were spent in a Capsule hotel. A popular and cheap form of accommodation in Japan that involves sleeping in separate pods that are packed on top of each other.

We had booked with Kiba Capsules Hotel and I wasn’t sure what to expect but actually, it was comparable to staying in a hostel, only with more privacy.

After clambering into my top capsule, I found it surprisingly cosy and well equipped with a reading light, fresh pyjamas, air-con, and a mini TV. The capsules were all fully booked on both nights, mostly with businessmen and women, but also with the occasional family.

This is definitely not an option for the claustrophobic! 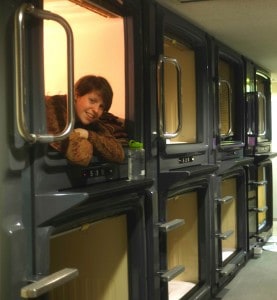 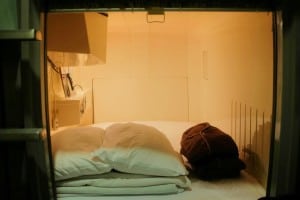 On our second sunny day in Tokyo, we had a stroll through Uneo Park while enjoying (or not in my case) some green tea ice cream, before heading to the Asakusa district where we jumped on a boat that took us back into central Tokyo. 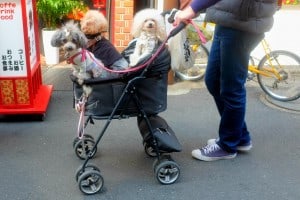 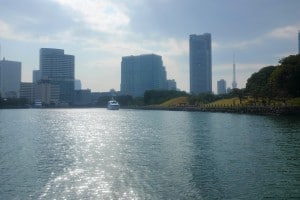 We caught the metro to Shinjuku station – the worlds busiest railway station with more than 2 million passengers a day.

Just west of the station is the skyscraper district. I couldn’t believe the number of adverts and lights were crammed onto every available space.

This was just how I had imagined Tokyo would look like. 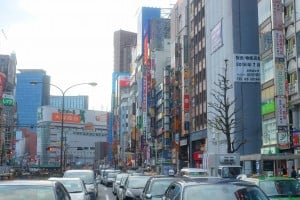 We had tickets to see the Robot Restaurant (it’s not really a restaurant but a robot show).

It was pretty weird!

I had no idea what the characters were yelling most of the time as they fought battles on giant robots, swinging laser guns and dazzling outfits. There actually weren’t that many robots in the show but it was visually very impressive and also quite funny, although I’m not sure it was meant to be. 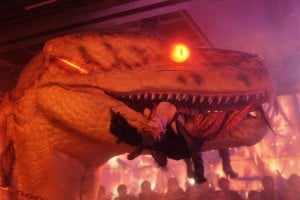 Sumo and Harry Potter in Osaka

Japans 300kmph bullet trains along with a Japan Rail Pass (allowing unlimited train travel for tourists) make travelling in Japan very easy. Within 3 hours we were in Osaka. 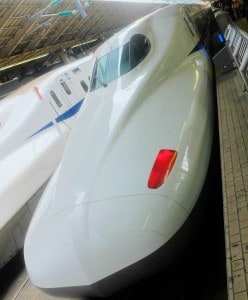 Before coming to Japan I had arranged tickets to see Sumo wrestling, something I was really excited about. I literally can’t believe this is a sport! It was incredible to watch.

I read afterwards that they all live in the same training house and, as part of their routine to maintain their size, they skip breakfast, have a pint of beer along with a massive lunch and then sleep straight away for a couple of hours. 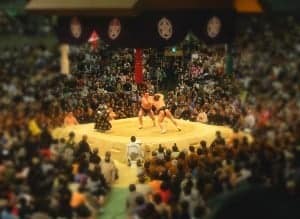 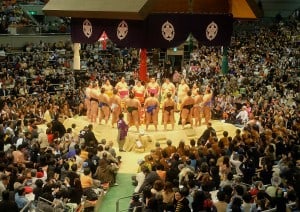 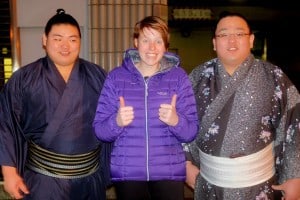 The must visit evening destination for Osaka is Dotonbori.

This bustling restaurant and shop district is even busier, brighter and more modern than Tokyo. 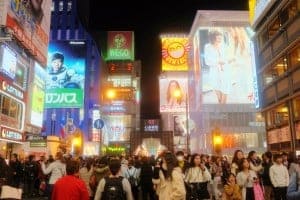 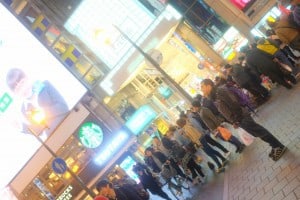 As a massive Harry Potter fan, I couldn’t visit Osaka without stopping at Universal Studios with its Wizarding World of Harry Potter.

It didn’t disappoint and the Harry Potter and the Forbidden Journey ride, with its giant robotic hands, high tech simulators and impressive sets, has to, hands down, be the best ride I have ever done. It was also really fun watching the excited Japanese visitors enjoying the park, most of whom were dressed up in matching outfits and owned annual passes. 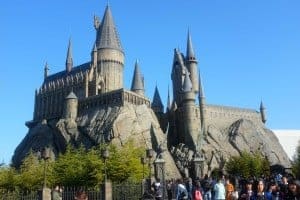 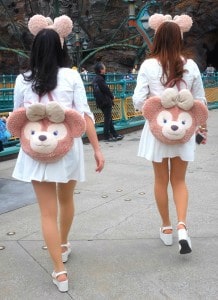 While in Osaka we stayed in Drop Inn Osaka.

A welcome break in Koya San

After 2 big cities, it was a welcome break to go to the mountain of Koya San, considered one of Japans most sacred places. Walking through the quiet green town hearing the chant of the monk’s prayer from the monasteries, it is impossible not to feel relaxed and charmed by the place.

Like many people who visit Koya San, we stayed in one of the monasteries. We were looked after by the monks, ate amazing traditional vegan Monk cuisine and were able to observe their morning prayer.

If you’d like to stay at a Koya San temple check out – Shukubo Fudoin. 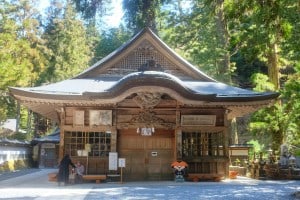 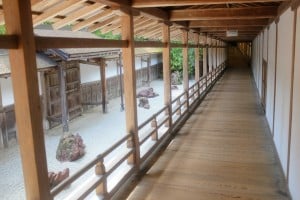 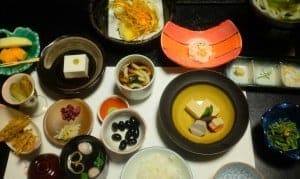 Another highlight was visiting Okunoin Cemetery, both in the day and at night. With it’s 200,000 odd tombstones which lead to Torodo Hall – a huge temple housing over 10,000 donated lanterns and 50,000 tiny statues……a seriously impressive site (and one that you will have to go see your self as photography is strictly forbidden). 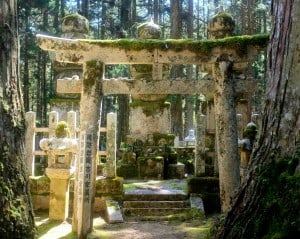 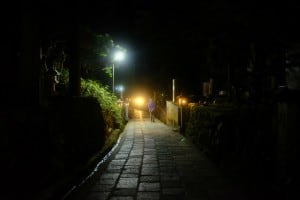 Sorted your travel insurance yet?

For insurance, we used World Nomads. They covered us for the full trip including for adventurous activities (hiking and skiing). You can get a quote with World Nomads using this link.