Sodom salt caves Israel; how is this a secret?

I had never heard of ‘salt caving’ so it’s fair to say I had no idea what I was getting myself into. Half asleep, as I headed to bed the night before, I agreed to go on a tour to explore Sodom salt caves Israel. We were passing through and had a spare day so why not? I’m usually game for trying new things, especially when they come with an impressive introduction like, ‘the coolest thing you will ever see in Israel‘. Sounds good to me.

After a quick breakfast, I was bundled into a jeep, along with the hubby and 2 other Israeli’s who were signed up to the tour. With no briefing or introduction, at this stage, I thought we’d be hiking and clambering through a few caves. I imagine most people that come all the way to the desert to do this activity do actually know what it is. With no expectations, I was just getting stoked to be back in nature although we’d seen loads of caves during our hike across Israel so its fair to say I wasn’t that excited.

Not what I was expecting

It was a fun and bumpy off-road ride to get us deeper into the desert from Arad to a spot that overlooked the Dead Sea. Despite the ugly linear lines that the factories have created, you can’t deny the Dead Sea is quite the view. 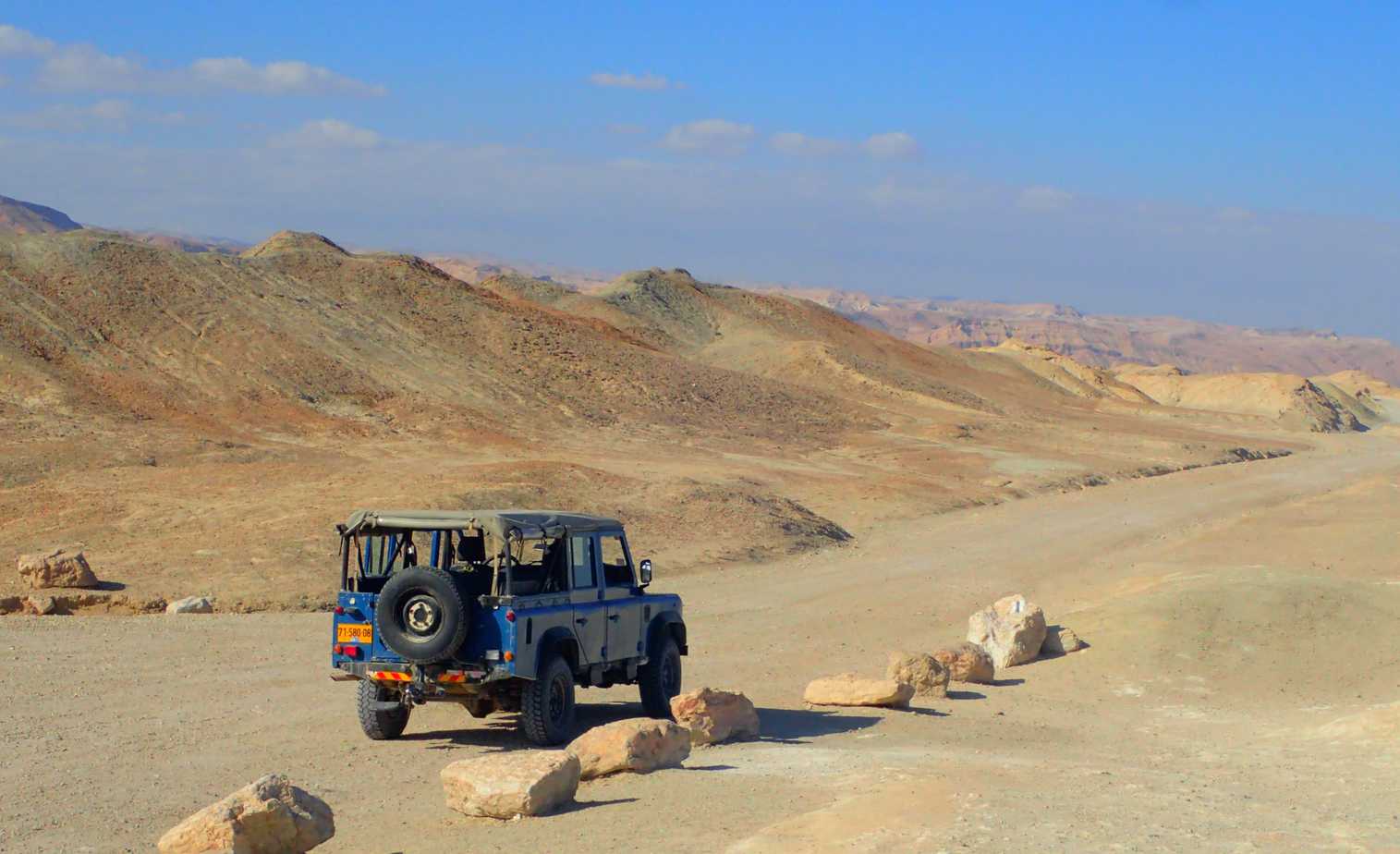 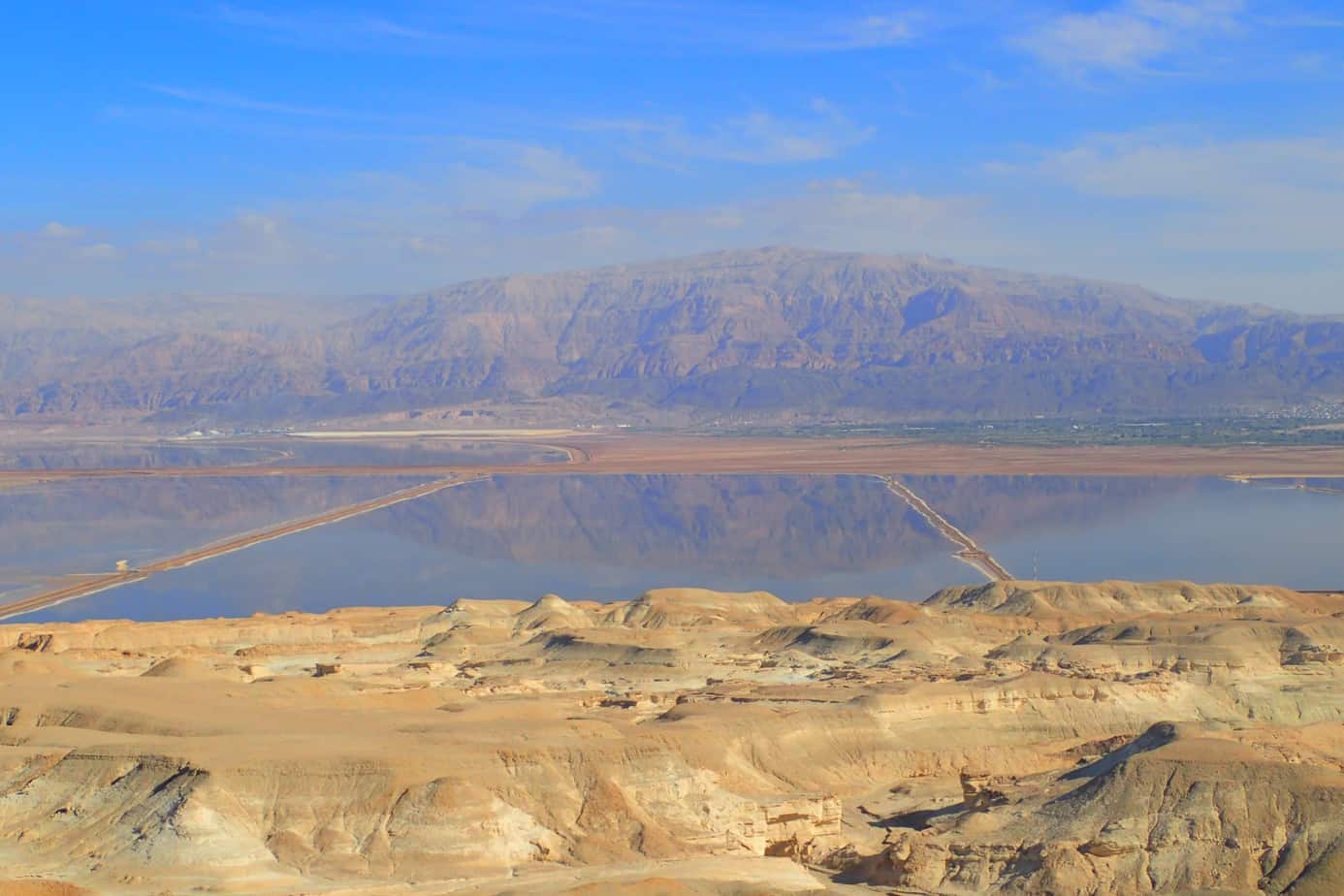 From here we were handed ropes and harnesses, my first clue that this would be more adventurous than I was expecting. We were led on a short 20-minute walk to the opening of Sodom salt cave where our guide started to rig a complicated setup. 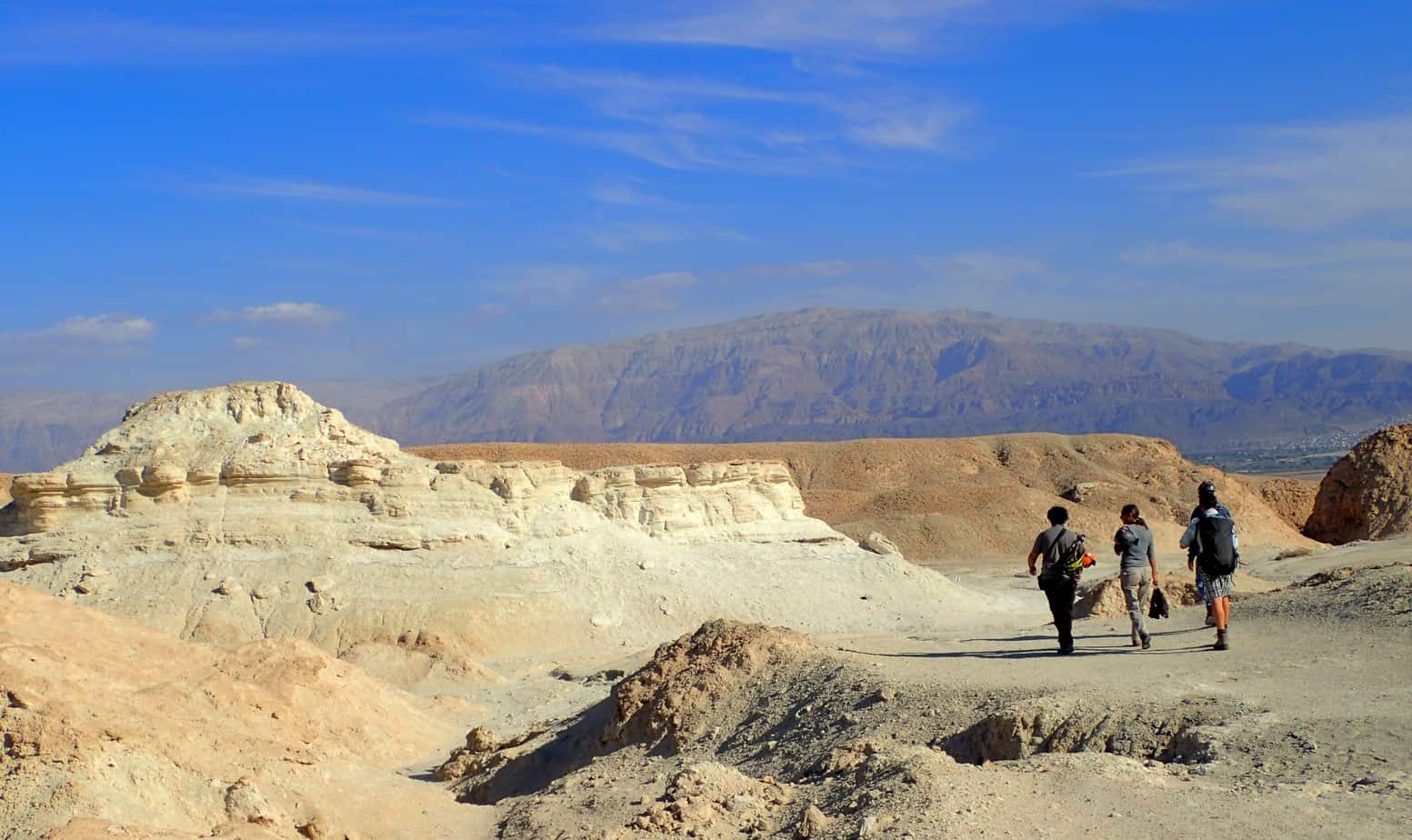 I’ve done caving before a handful of times. A few easy routes with kid groups and I once found myself in Wales swimming through a river deep in a cave. It had been fun and easy, with just overalls and a helmet needed.

‘So, we’re abseiling ?’ I asked, surprised that we hadn’t been given any briefing or safety talk before being told to put our harnesses on.

‘Not just any rappelling, this is 80 meters’ was the reply.

Whoa! 80 metres is a seriously long way. I doubt I’ve ever abseiled more than 30 before.

I looked down into the dark opening ahead of me and tried to imagine how far down that actually is. It was hard to picture it.

I couldn’t shake that feeling

When you do any adventure activity, unless you are experienced, you are putting your complete trust in your guide. I just couldn’t shake the feeling in my gut that the trust just wasn’t entirely there. I like briefings and safety talks. I think they set a tone of respect for the seriousness of adventuring.

It wasn’t just the fact that we hadn’t been briefed. Abseiling isn’t a new activity for me, although I’m by no means qualified. There are some things that I am used to seeing with ropes and had always used a system that involved a self-belay with a safety rope controlled by the guide.

This time, I would be entirely in the hands of the guide. No self-belay and no safety rope. In fact, there seemed to be a complete absence of backups altogether – no stopper knots or friction knots in sight. I had to ask…

‘What happens if you let go of the rope, like, let’s say have a fit or a rock falls on you or something, what will stop me falling?’

‘I won’t let go’ Hmmm, not the best answer. Not much reassurance.

There was no way I was going first (heroic!). I let the other participants go over the edge and watched as the guide lowered them down. It was long. Like really long. 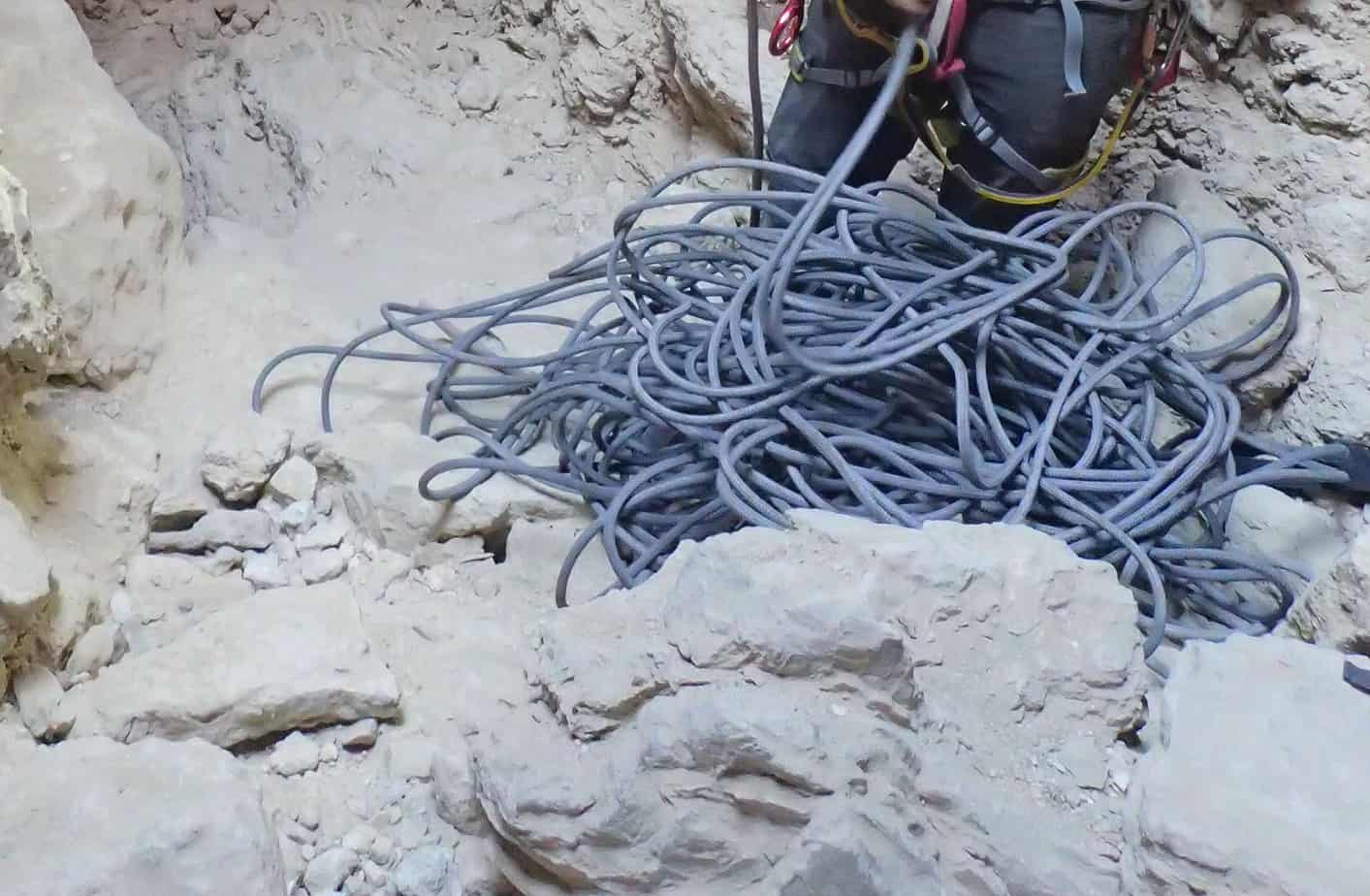 By the time it was my turn I was feeling pretty anxious without that trust there. Well, it was now or never. Despite my reservations, I decided to go for it.

I leant back over the dark hole and pushed my legs against the rocks so I was in an abseiling position. I turned my helmet light on and watched as the guide started to lower me. As soon as I was over the edge, the atmosphere changed. The air became stale and cold. It was dark and I could feel the silence.

I looked down. Wow….like, seriously, wow!!

Far down below, I could make out the tiny dots of the others’ headlamps. This was insane! I was in a huge funnel that had these incredible ripple markings along the wall. Everything was made of salt. 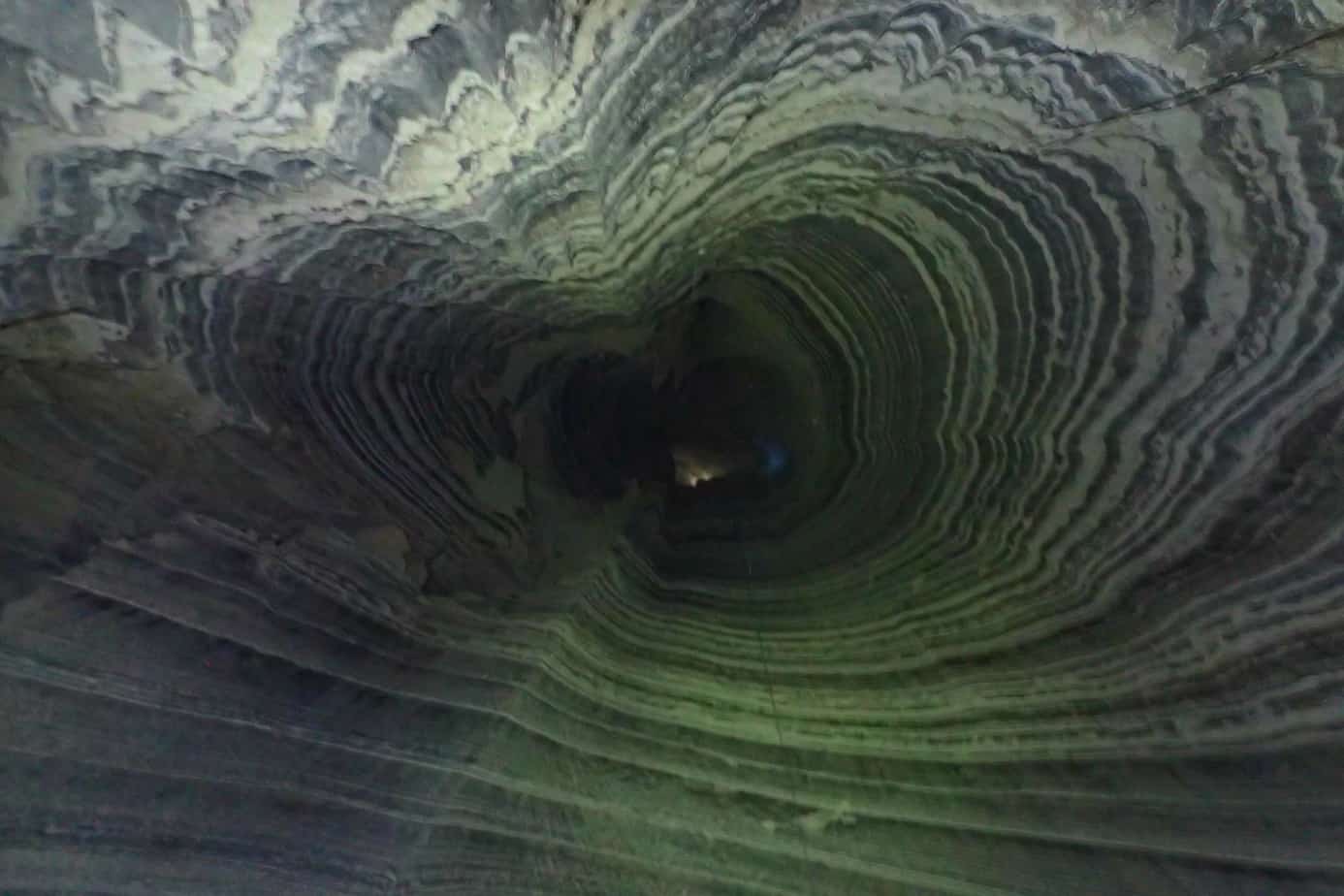 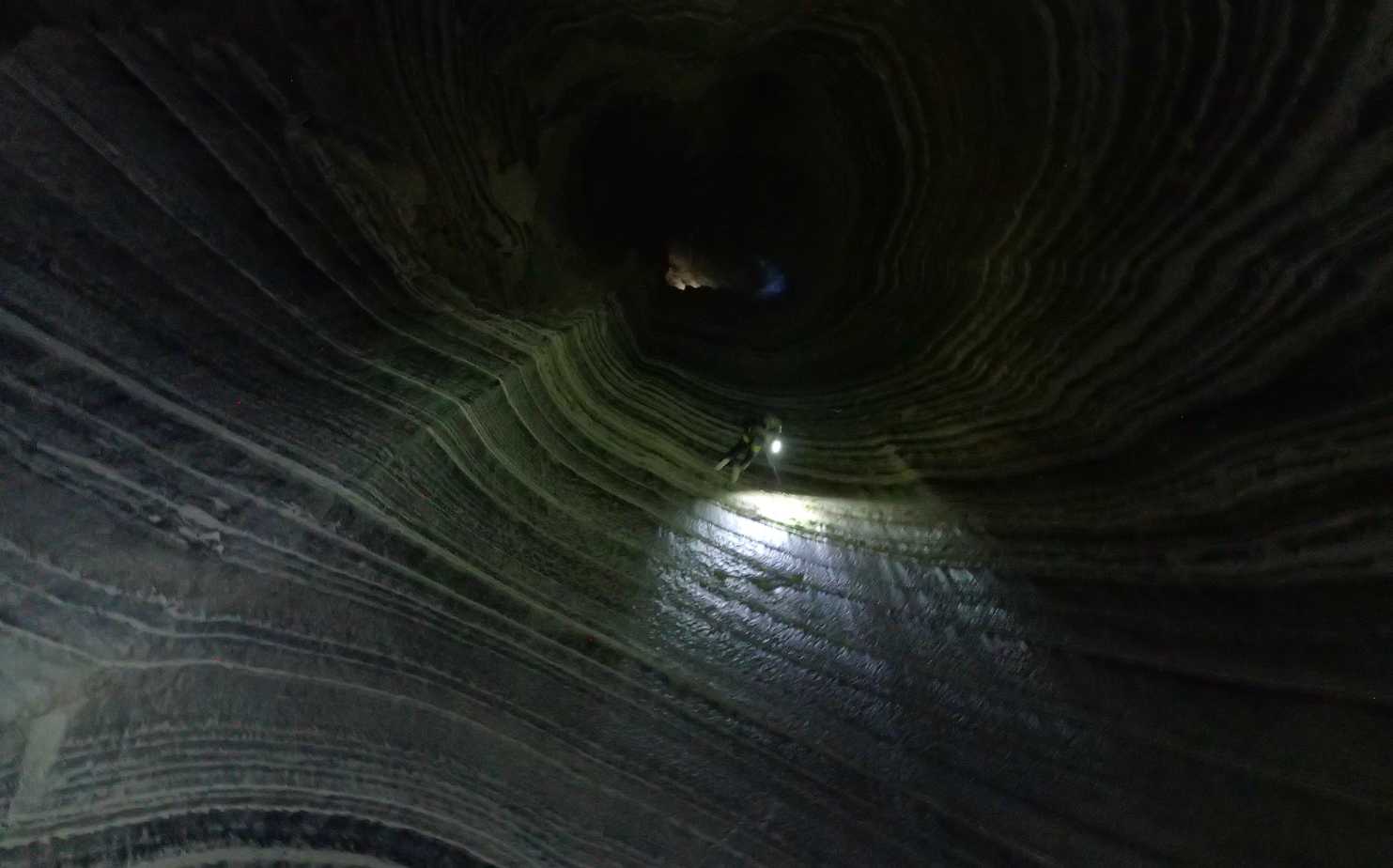 The abseil felt long and I was very aware of my height and the single rope that held me here, although there was little I could do about it now.

I felt relieved when my feet hit the bottom and I unclipped the carabiner from my harness. Glad that’s done with! 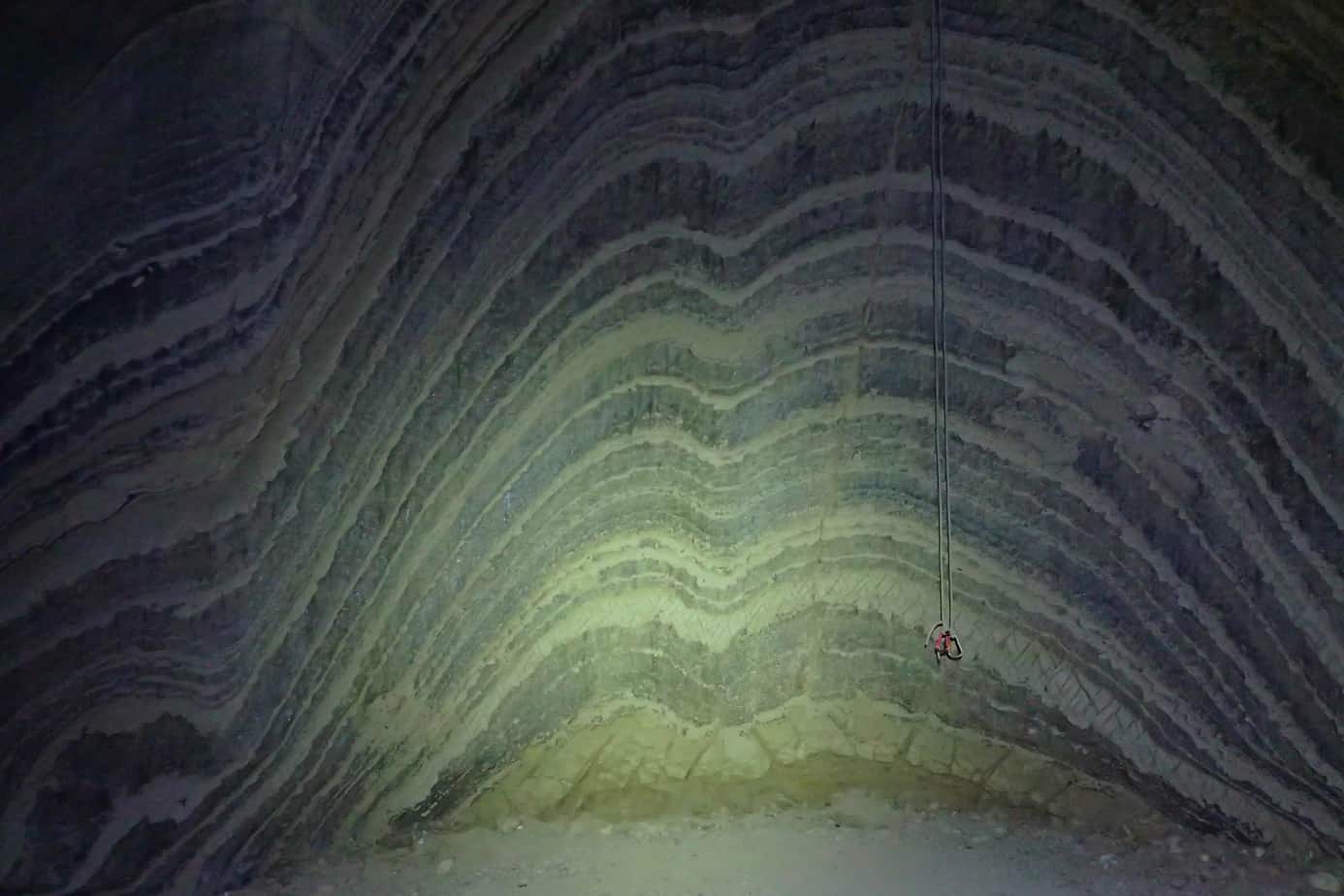 Arriving on a different planet

I walked around the large open area at the bottom of the chimney, inspecting the salt walls closely. In some areas, where water was dripping, delicate pinnacles had formed. It literally looked like I was on another planet. How is this place even real?

It literally looked like I was on another planet. How is this place even real? 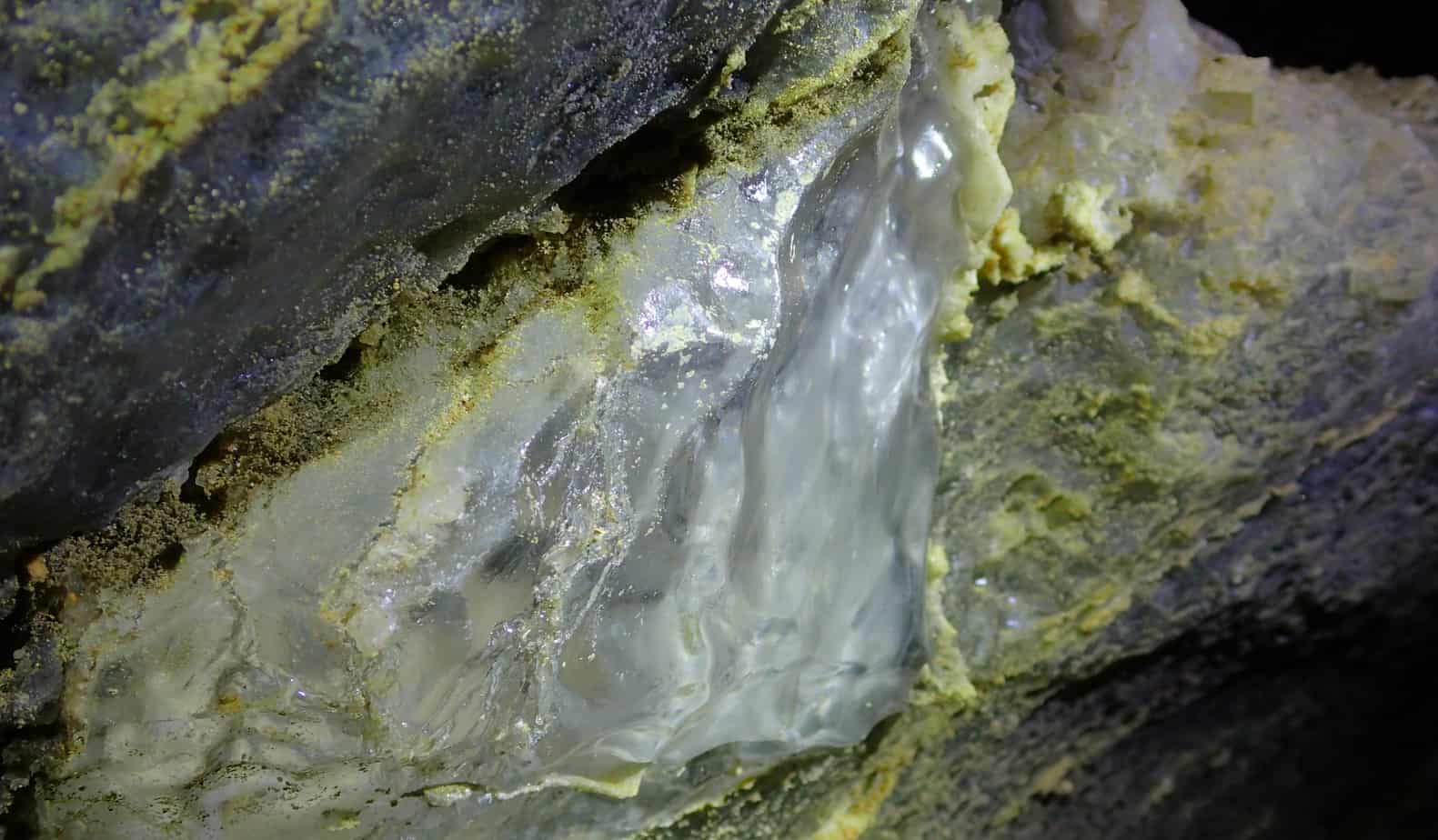 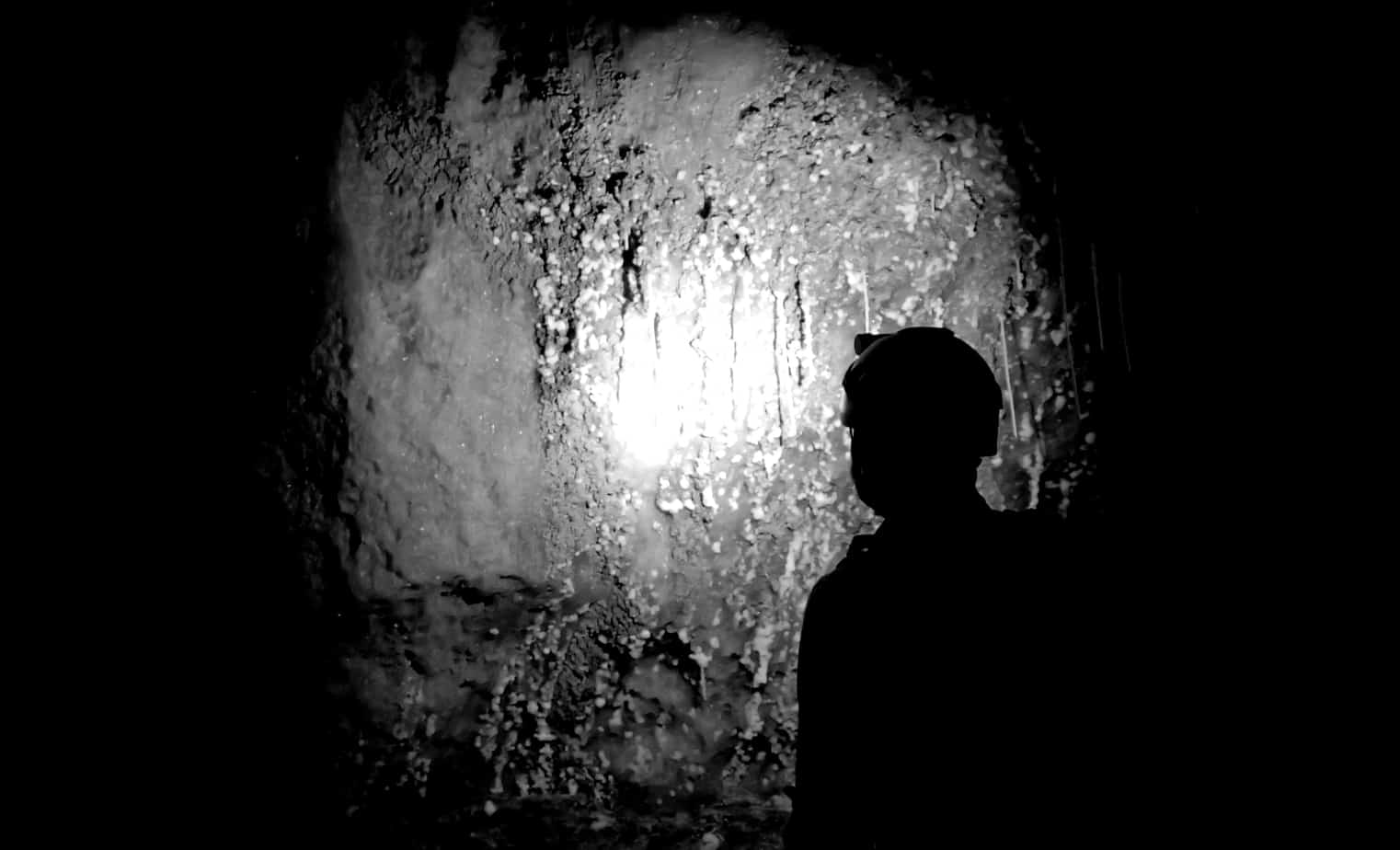 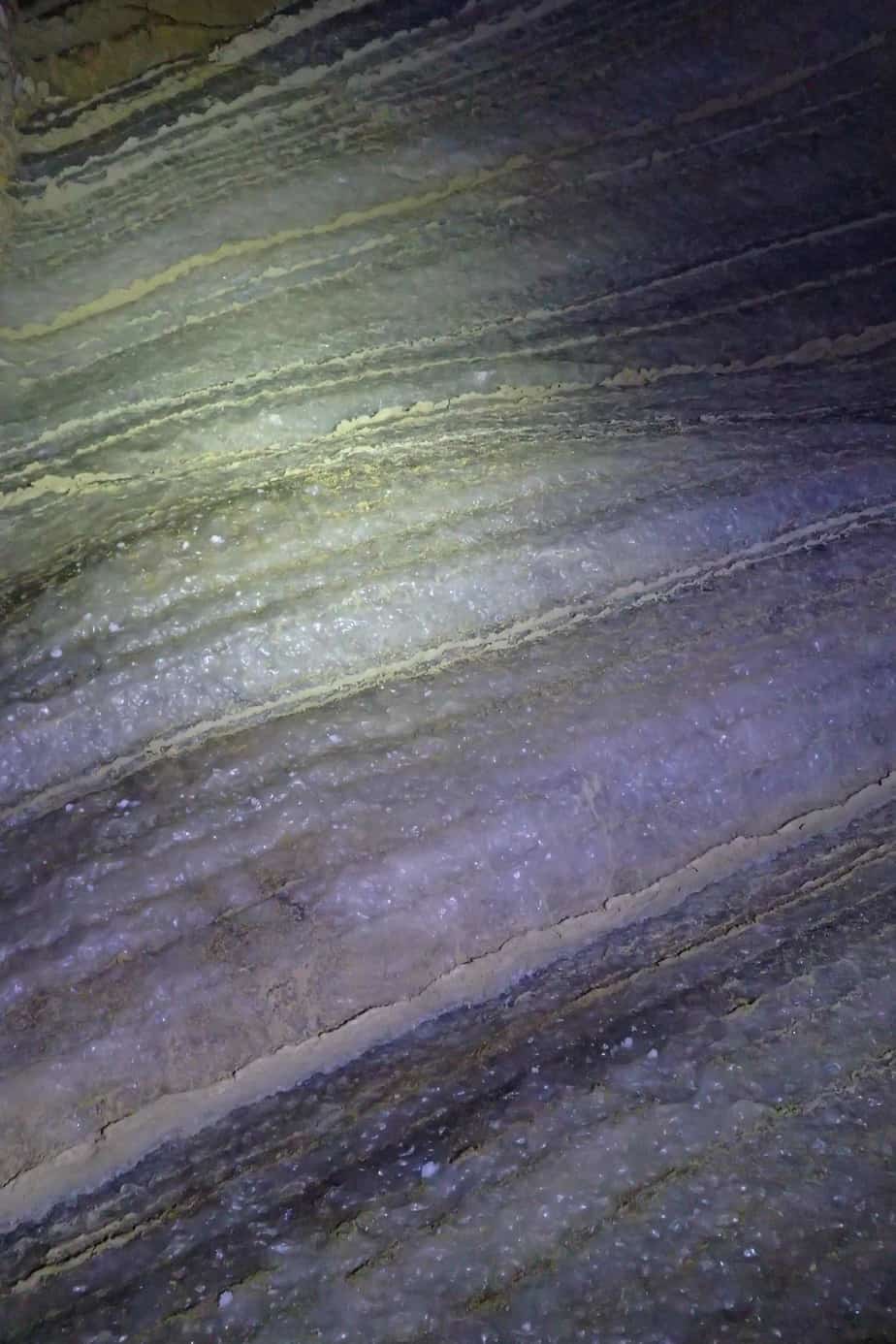 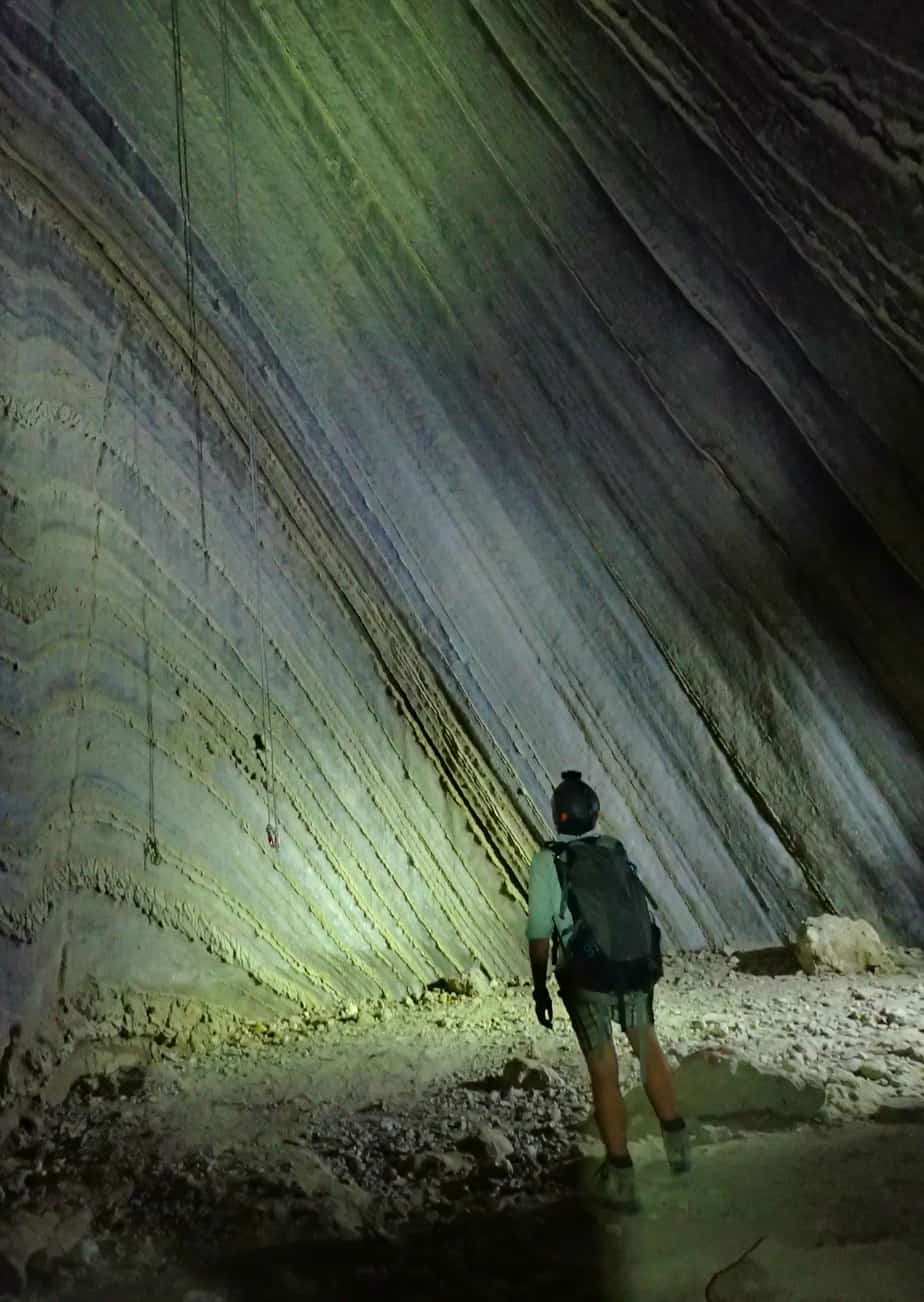 The guide abseiled himself down. Soon after, we set off, following the only small route out. The water flooding in the area had formed scoop formations in the walls. We had to duck and slide to fit in the unusual spaces, avoiding the jagged surfaces. Nothing too technical, although you wouldn’t want to be here if you were claustrophobic.

The guide kept a good pace which I could only just keep up with. I was regretting wearing a short sleeve T-shirt with all the scrambling on the floor…or rather not being told what was suitable to wear.

Each turning opened up a new fascinating view. 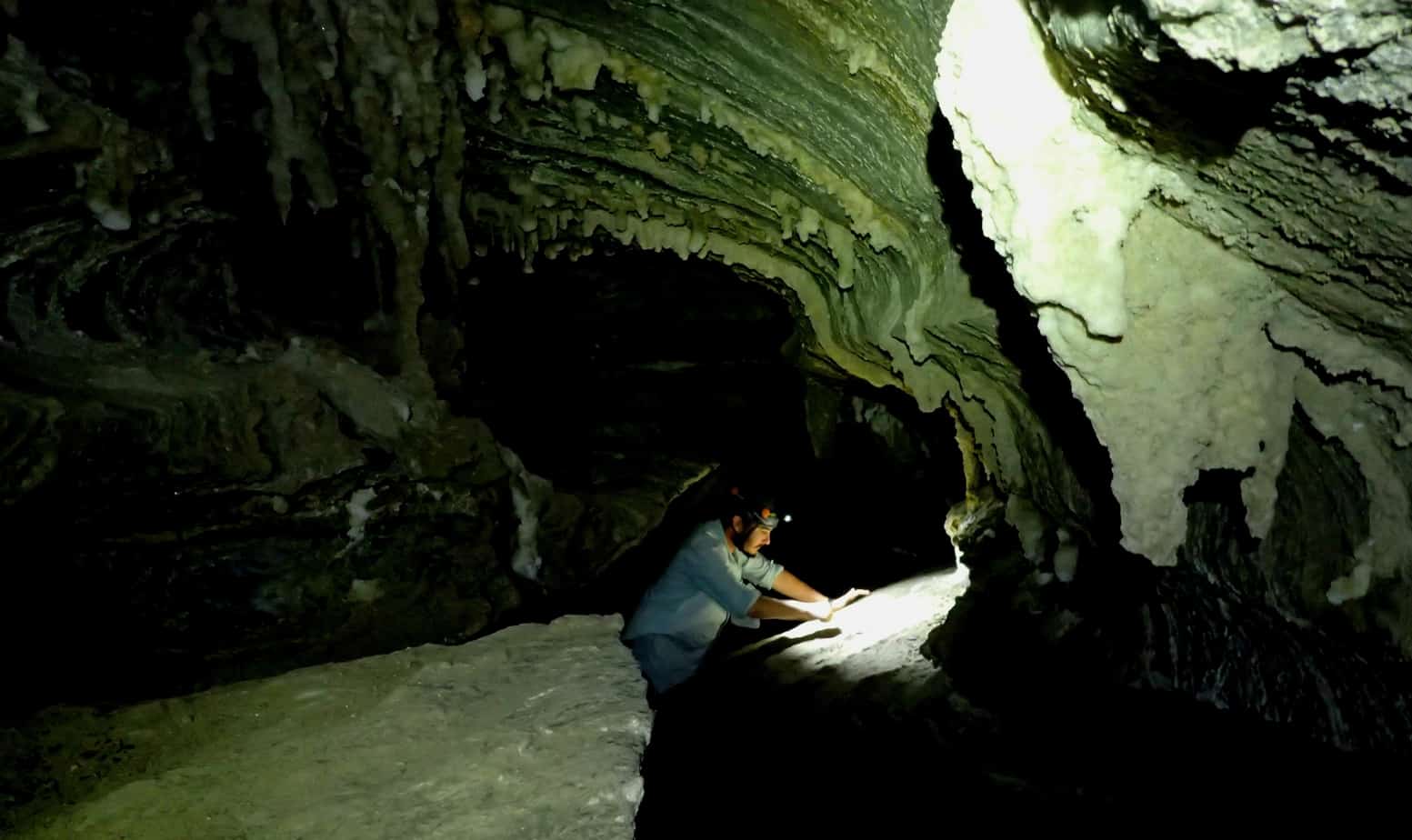 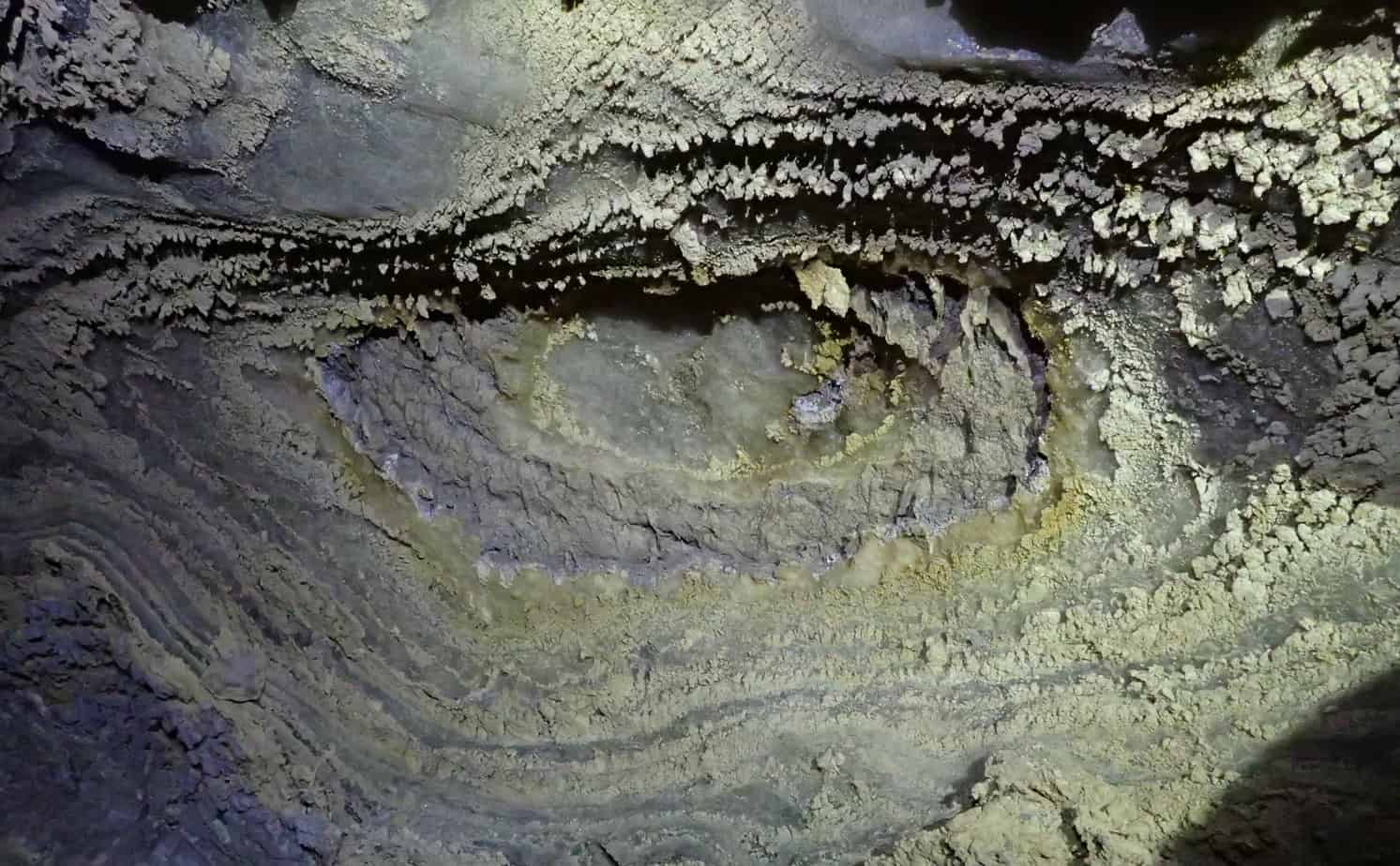 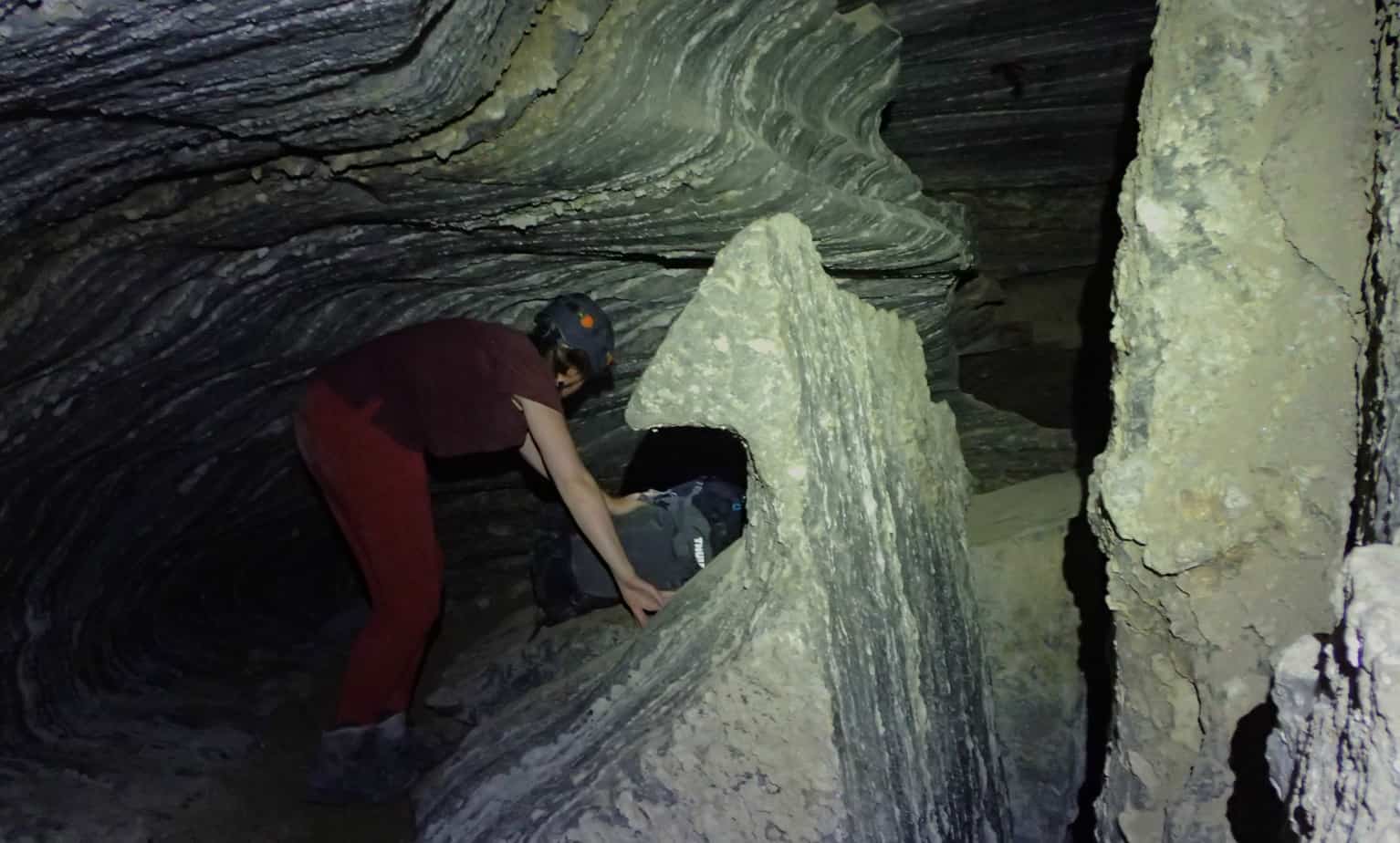 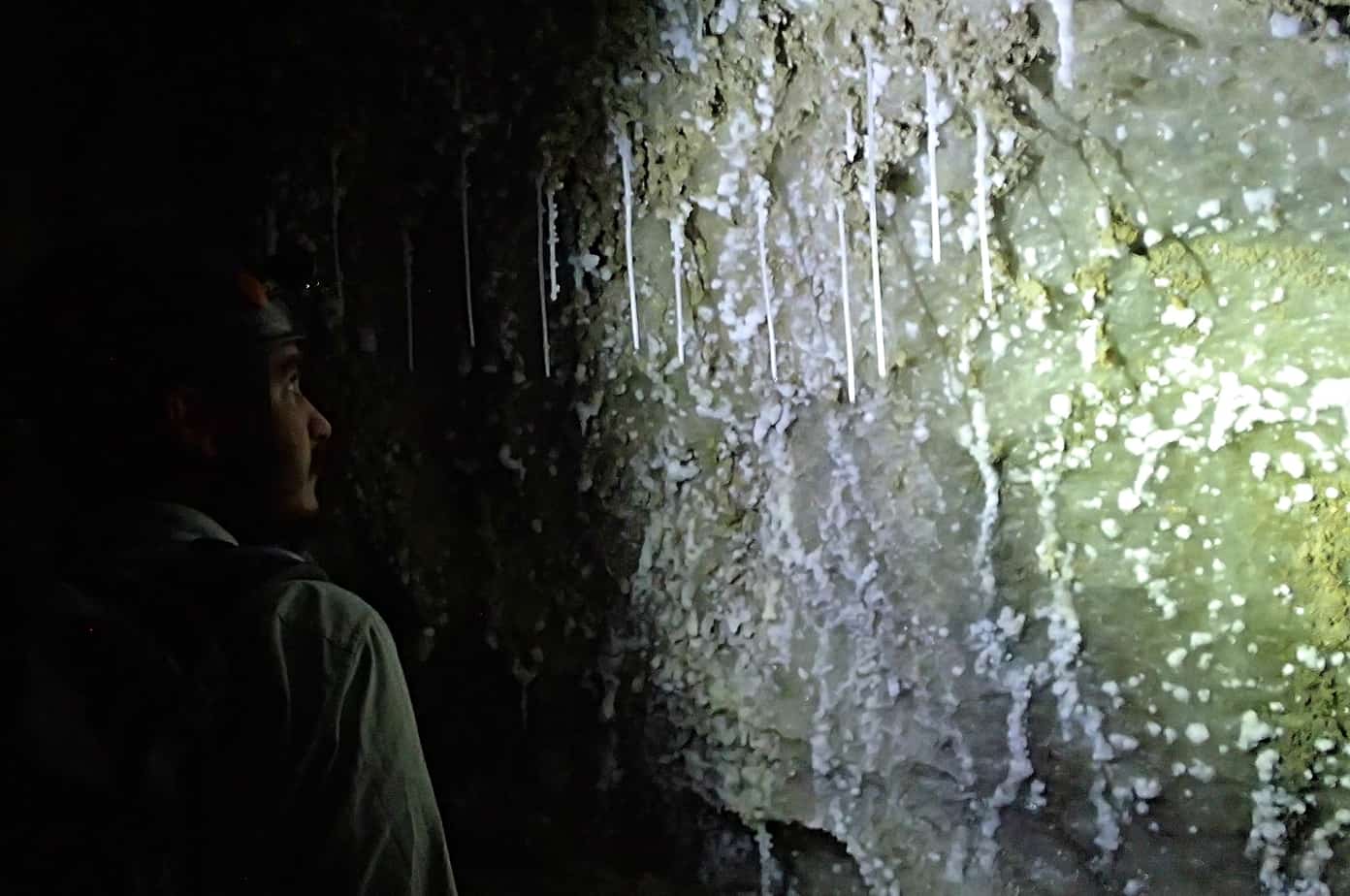 Absorbed in the alien environment, I completely lost track of time. We might have been going for an hour, or 2 or maybe even more. I scrambled under a boulder and into a large area. The darkness was less intense here and I could feel a gentle trickle of inviting cold fresh air.

We were near the end.

In this area were ruined wooden structures. Signs of it once being used by people to shelter from the extreme heat of the desert.

‘When you think it can’t get any smaller, it will. But then you’re done‘, the guide warned us. He wasn’t wrong. The last few manoeuvres through cramped tiny openings were only manageable with small shuffles propelling yourself forward while lying on your belly. 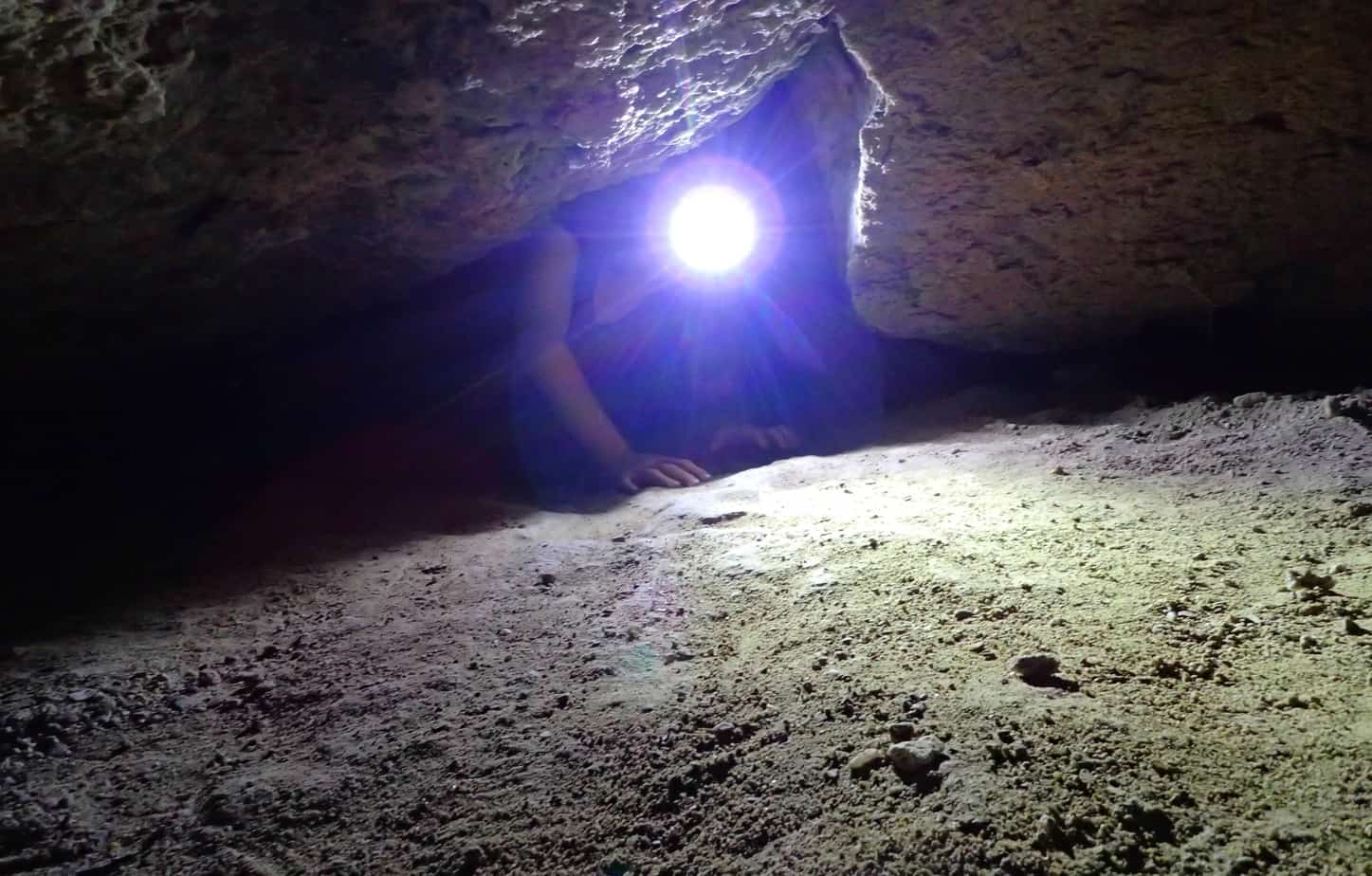 Back out in the sunshine

It was a bit surreal being back outside. A completely different world. I hadn’t realised how stale and hot it had been in the cave. Even in the dusk, it took a while for my eyes to adjust.

I was covered in dirt and scratches. I felt very salty. Time to head back to the hostel for a shower.

Later I reflected on the experience and my uncertainty with the safety of the activity. Should I have gone? Probably not. I’m a big believer that you should follow your gut. When looking for adrenaline, there is no such thing as too many safety precautions. Things can so easily go wrong.

Did I regret going, though? Not at all. Seeing the Sodom salt cave had been the single most amazing experience I have had in Israel. I have no idea how this has remained such a secret. The unique rock formations and colours of the salt made the mountain look like nothing I have ever seen before.

I literally can not wait to go back. 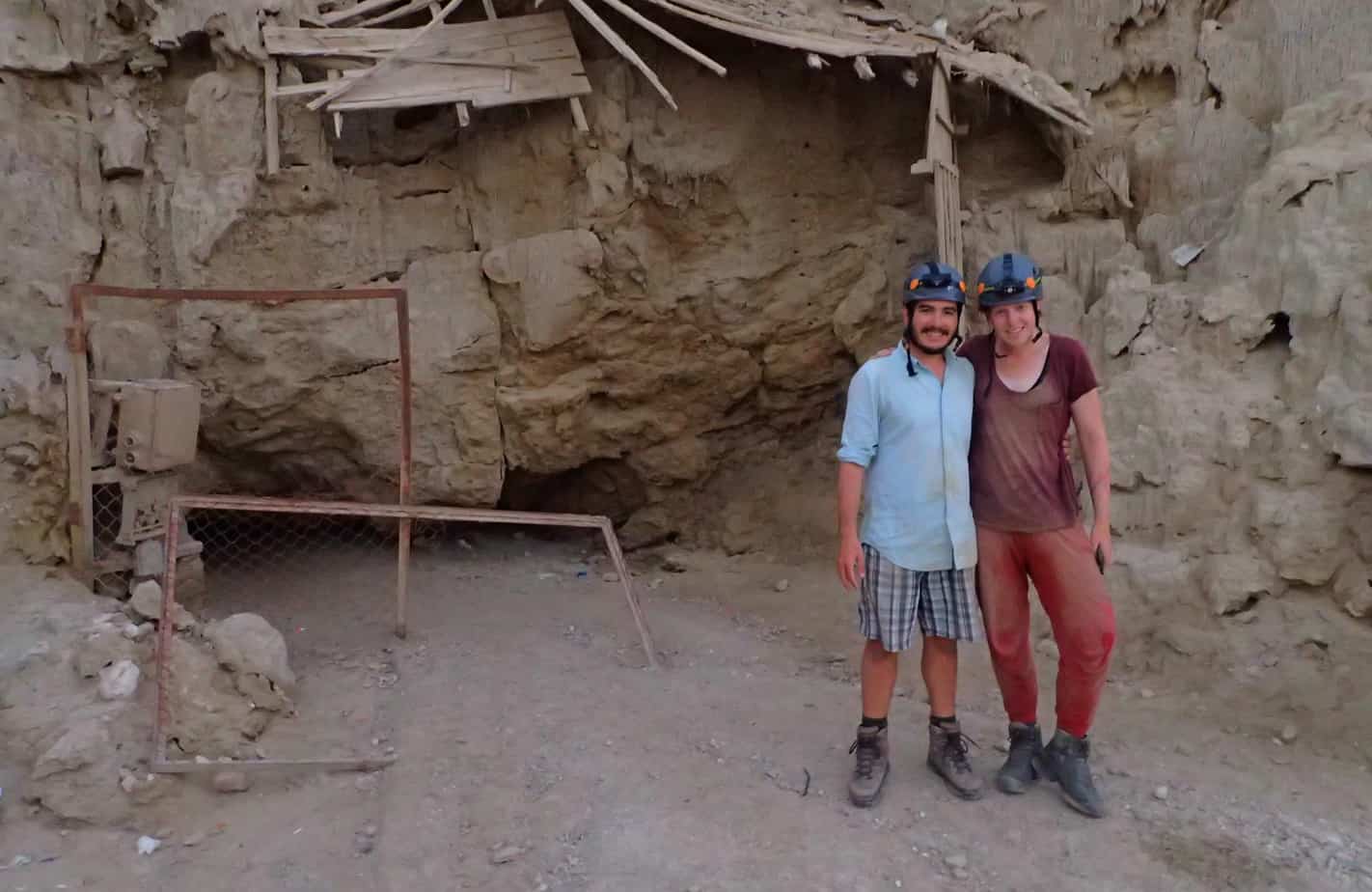 Need some inspiration to travel to israEl?

My debut published book – Three Stripes South – shares my story of hiking the full length of the country on the Israel National Trail. Read about the highs and lows from this life-changing adventure exploring Israel and crossing the dangerous Negev desert.

I hope you enjoy the book!