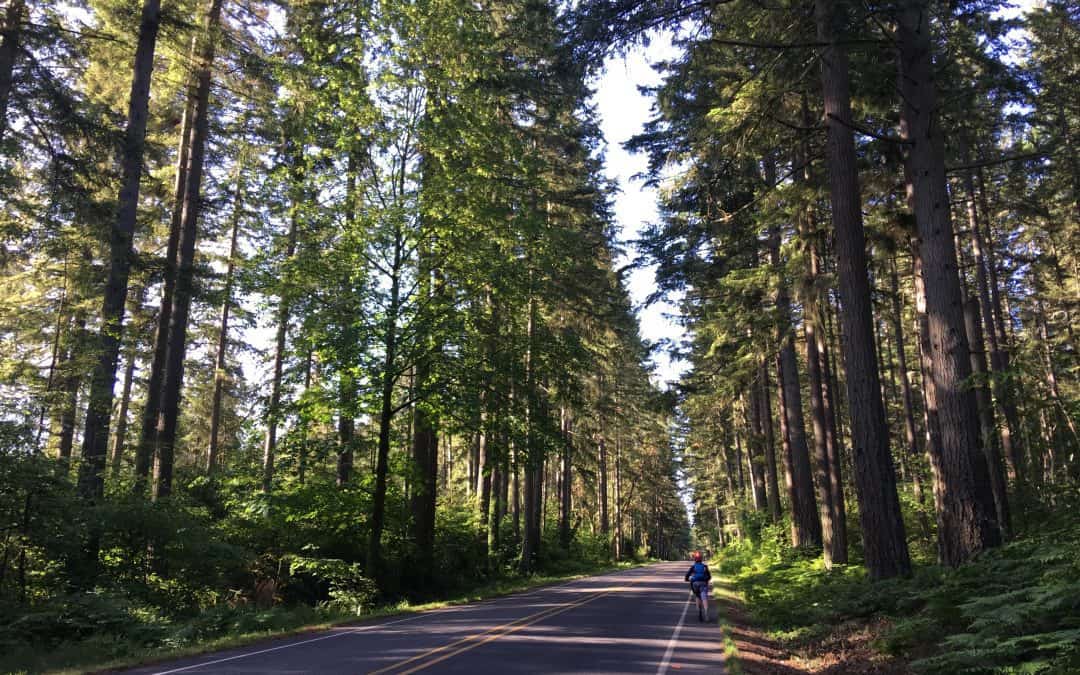 This stretch has felt really hard on the body, and long. With our increased millage we needed to cover over 55km a day to reach Portland by the weekend. We don’t have much flexibility with dates and if we don’t reach a stop in time then we miss our on press opportunities and talks that have been planned…all essential for our fundraising!

Despite the huge boost to our fundraising target and mood we left Seattle at snails pace. At times I was thinking to myself that we’d literally be quicker if we were walking! Gil and I are quite in tune so I could see he was struggling as well. 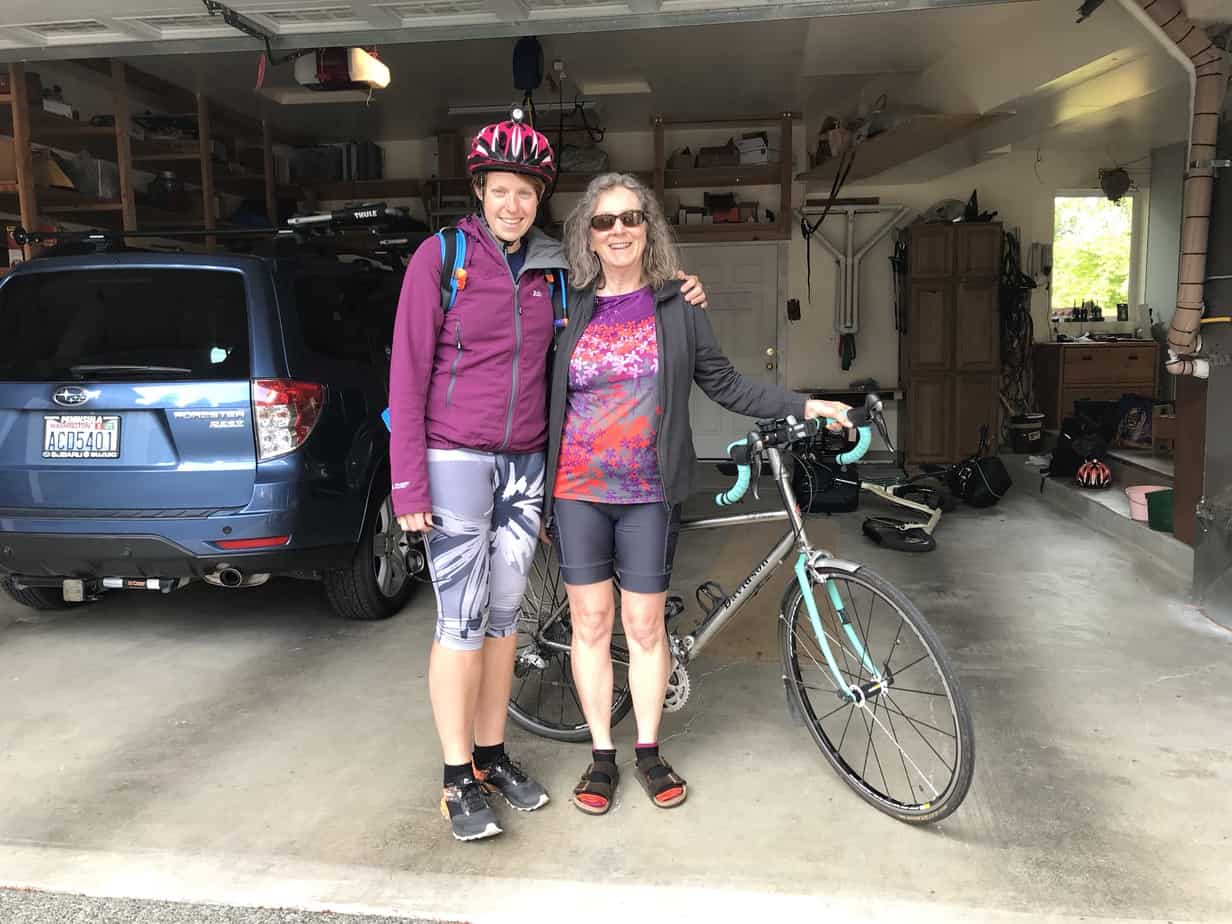 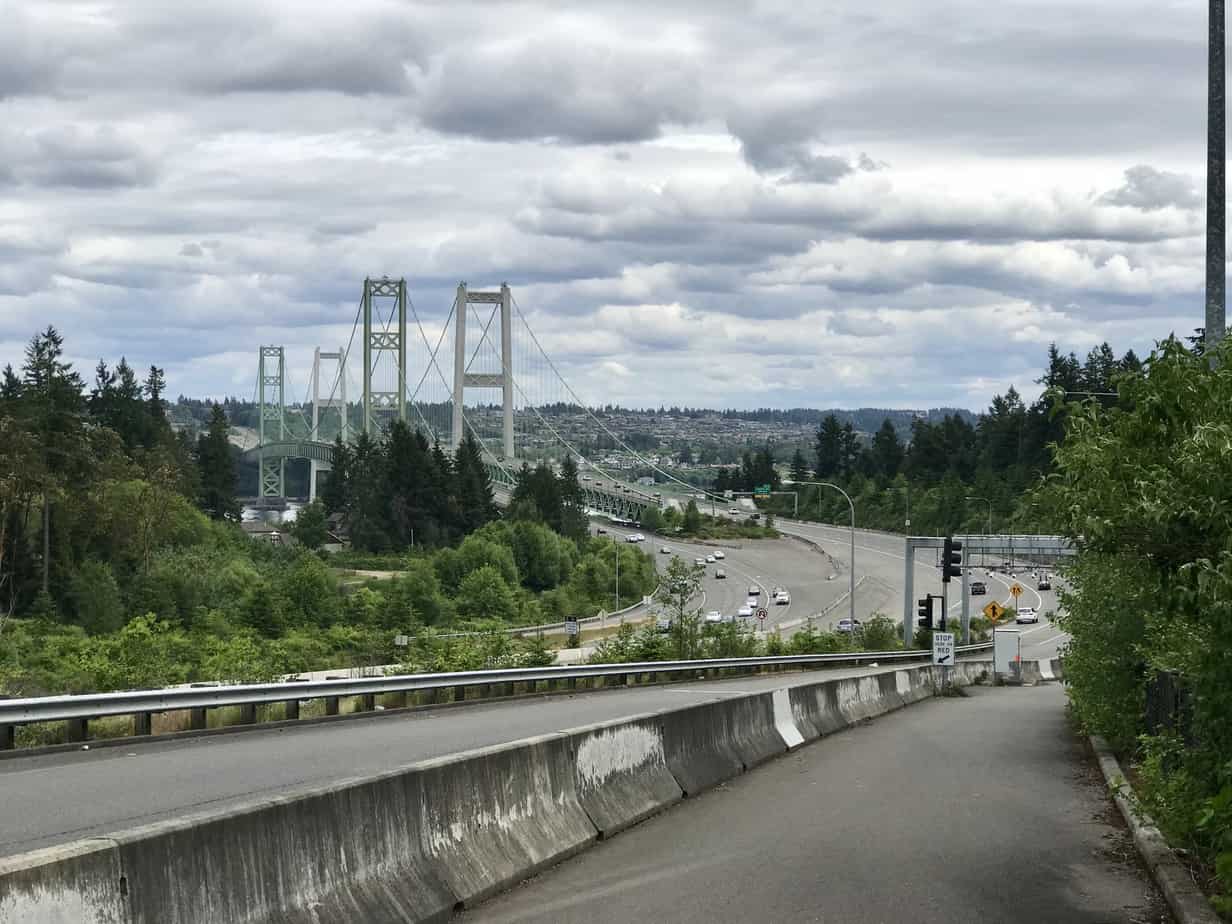 I felt a little bit anxious throughout the day because I had in the back of my mind that we had nowhere planned for our accommodation that night. Up until now we’d been so lucky with Warm Showers, offers from kind strangers and conveniently located campsites. But there was nothing for that night. With wild camping not an option (we don’t want to push the rules here!) it meant we’d have to knock on someone’s door and ask to sleep in their garden (or rather ‘yard’….we’ve been warned not to say garden as they may think we want to sleep in their vegetable patch!). Of course I’ve read of many adventurers doing this and I knew it’d be fine but not having a known place to sleep for the night really puts me out of my comfort zone…. as does knocking on random doors. So I was a bit nervous!

We got hijacked en route to join a flag waving mob. Something to do with Memorial Day! 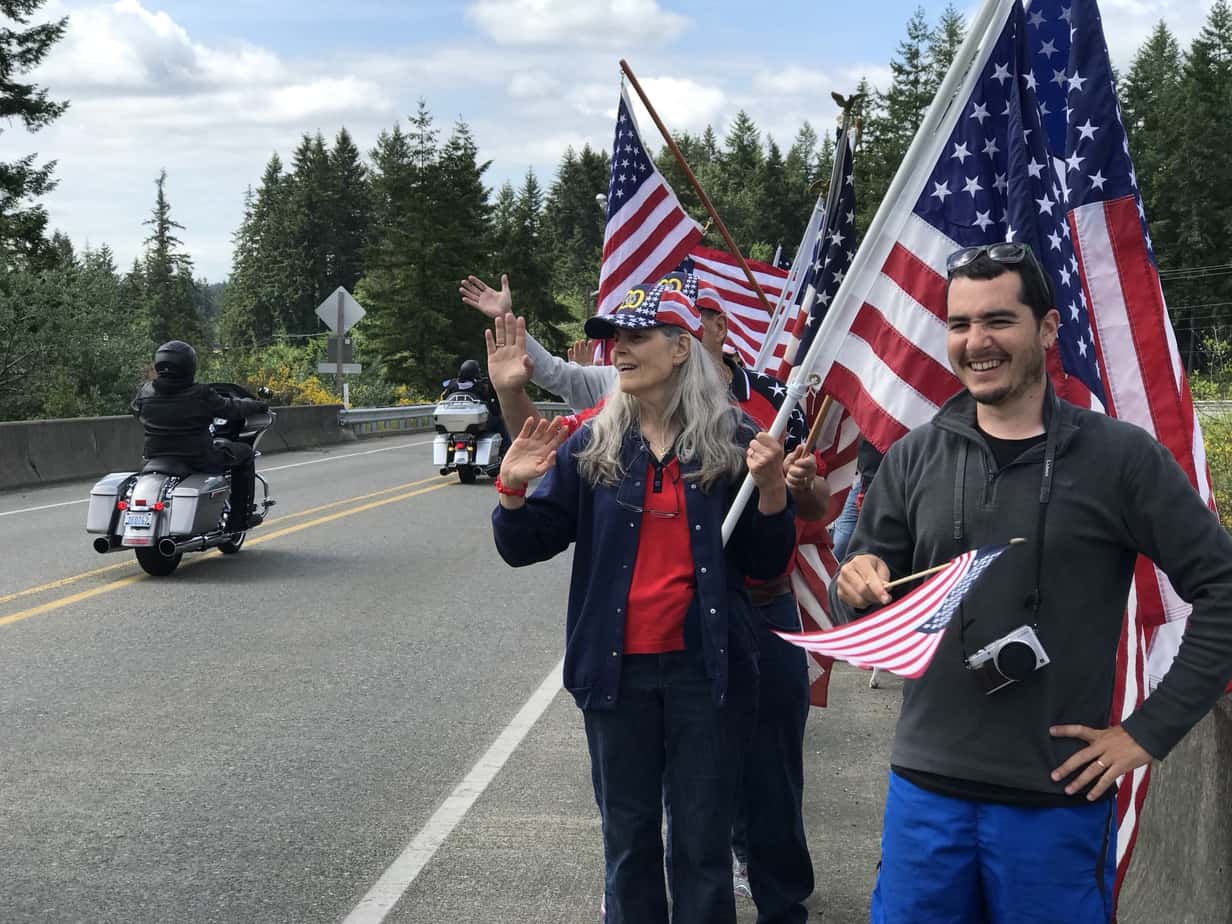 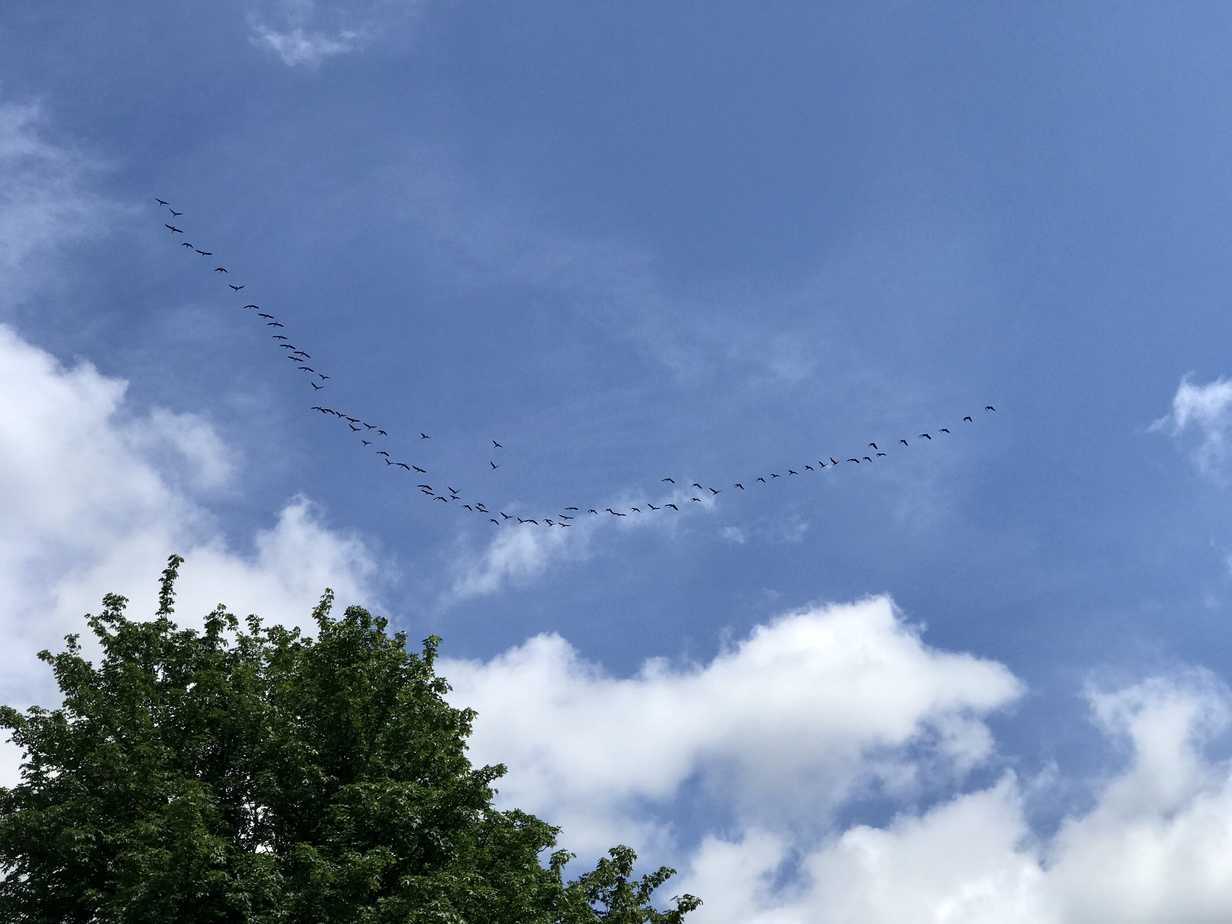 Well that was easy!

After a pub dinner I approached a nice looking lady who was doing some gardening. Straight away she jumped up and started chatting to us in the friendly and non-suspicious way that Americans do. I explained what we were doing and asked out right if we could camp in her ‘yard’ (lol) and added that there was no pressure if she didn’t feel comfortable with it.

“Well you seem like nice people so I don’t have a problem with that”.

It was as easy as that! What was I worried about?!

Not only did we get a nice flat camp spot but we got to spend an evening chatting with Liz and her husband Terry and sharing cuddles with their 2 charming Golden Retrievers. 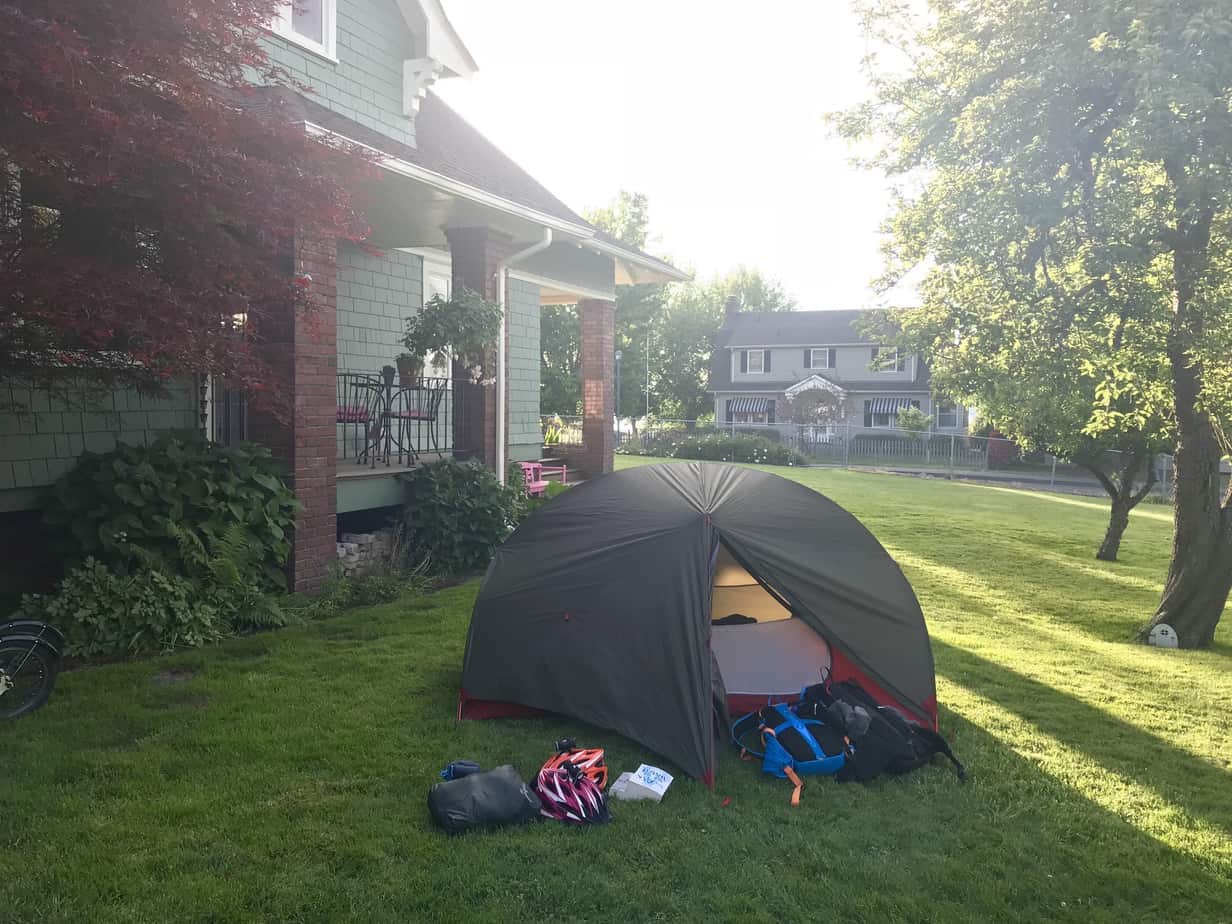 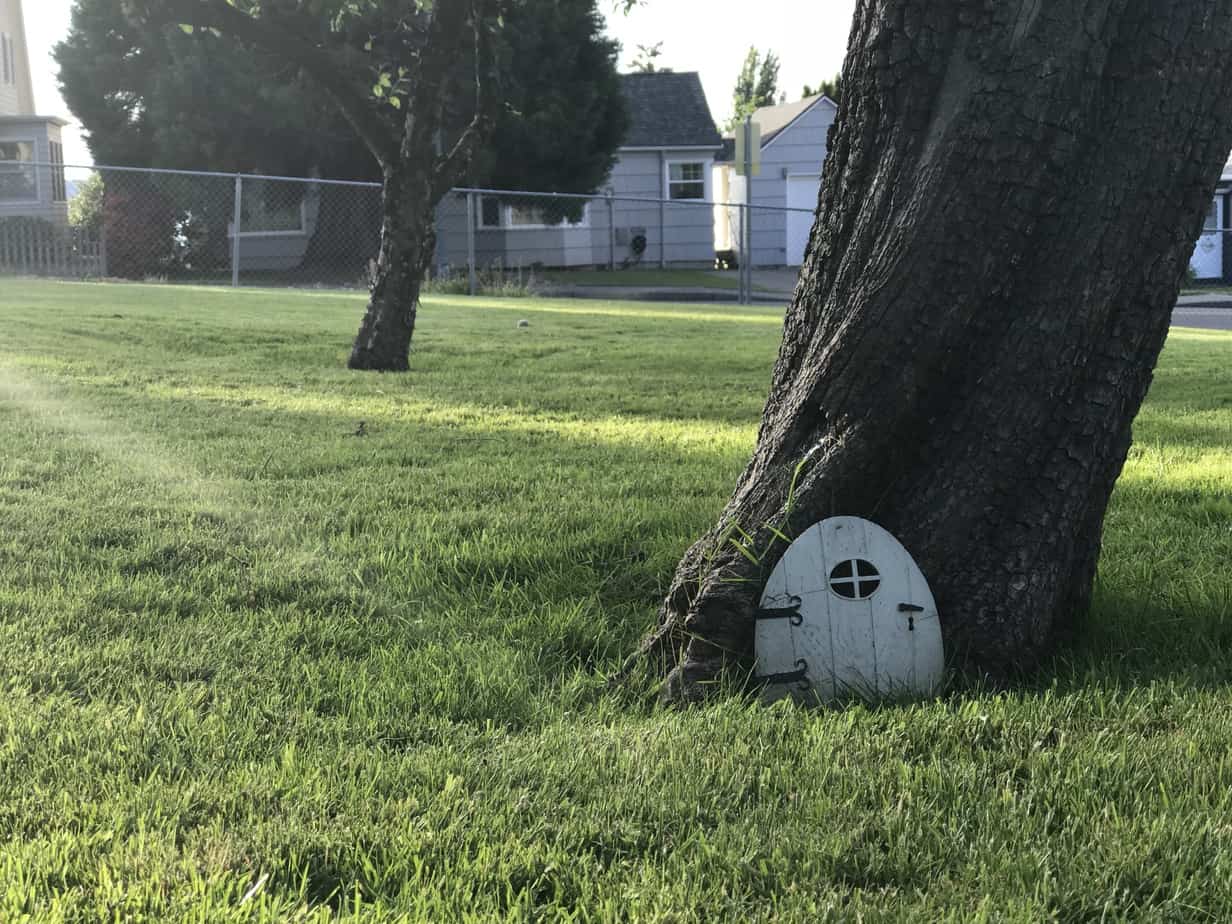 2 days later and nearing the end of our longest scoot day on the trail yet, we turned a corner and saw that the road had been blocked by police and to the left was a house on fire. 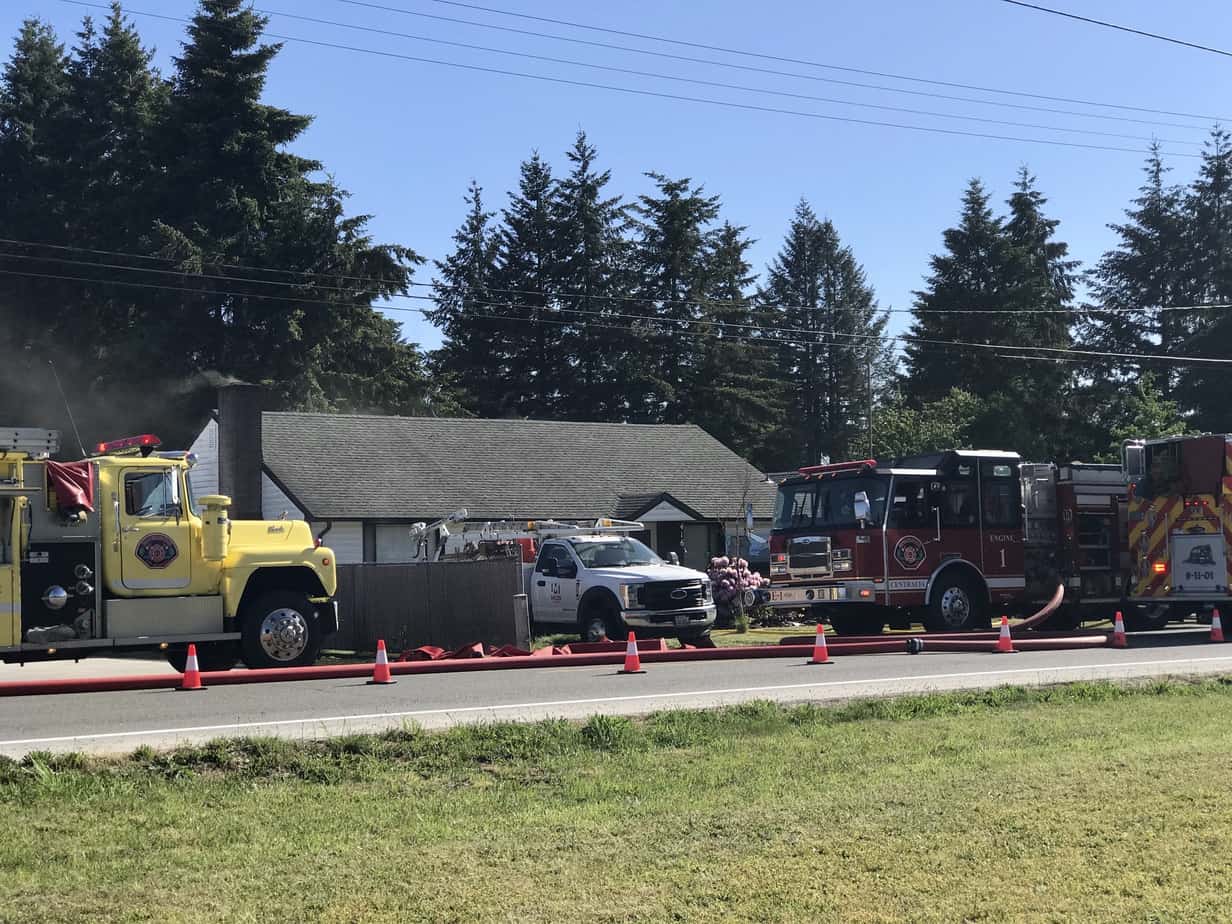 Not wanting to do the huge detour on the roads we decided we’d cut through the large field to our right, pushing our scooters as we crossed. A woman came running towards Gil yelling that he was trespassing and was on private property. Seriously?! I’ve noticed so many trespassing and keep out signs it puts me a bit on edge.

A police office then started walking towards us and I thought we would get a telling of. It turned out he just wanted a ride on our scooters. When we told him we were heading to a particular motel the other side of Centralia he told us it was a dump and called an alternative place saying “this is Centralia Police and I’m just calling to let you know there are 2 visitors on scooters heading your way”. It did the trick…they gave us a $15 discount!!

Such a random moment! 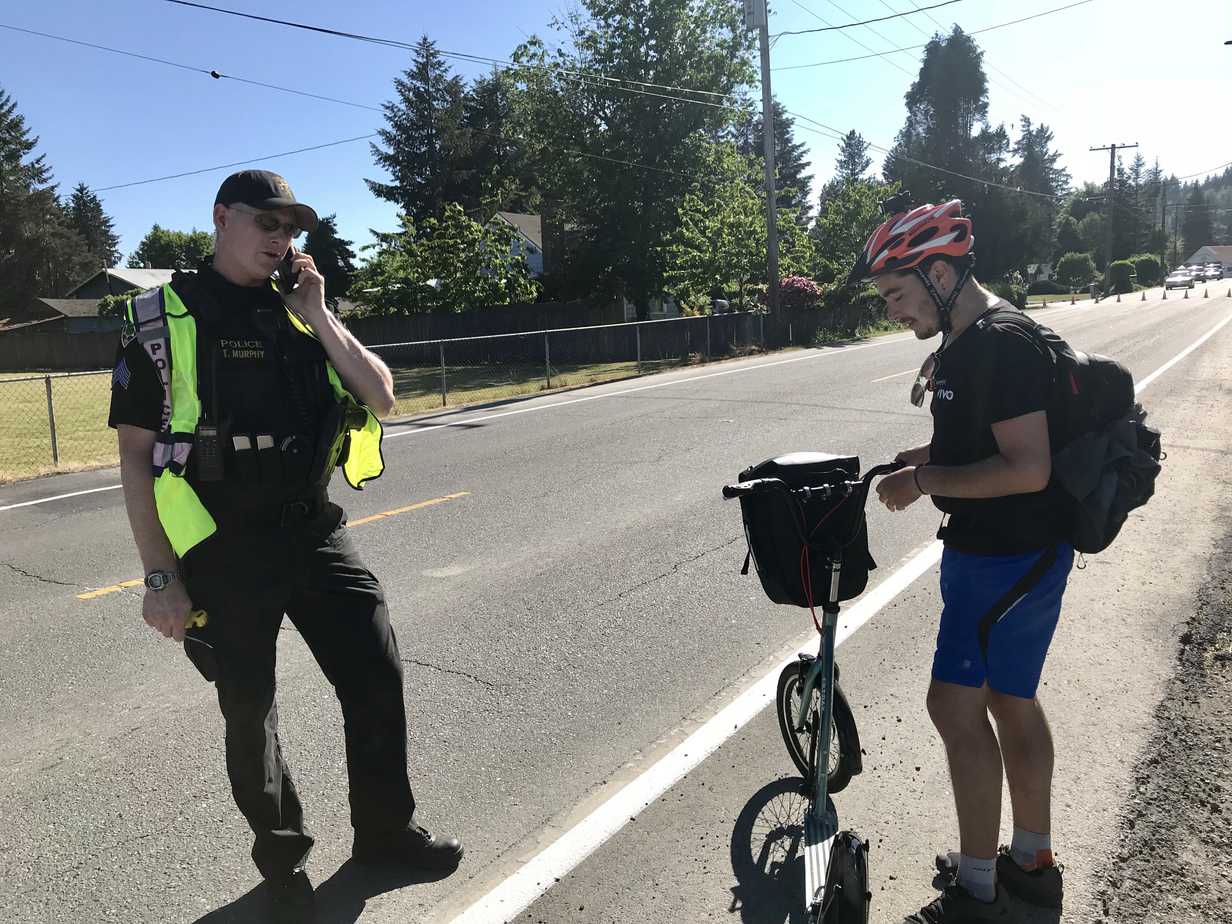 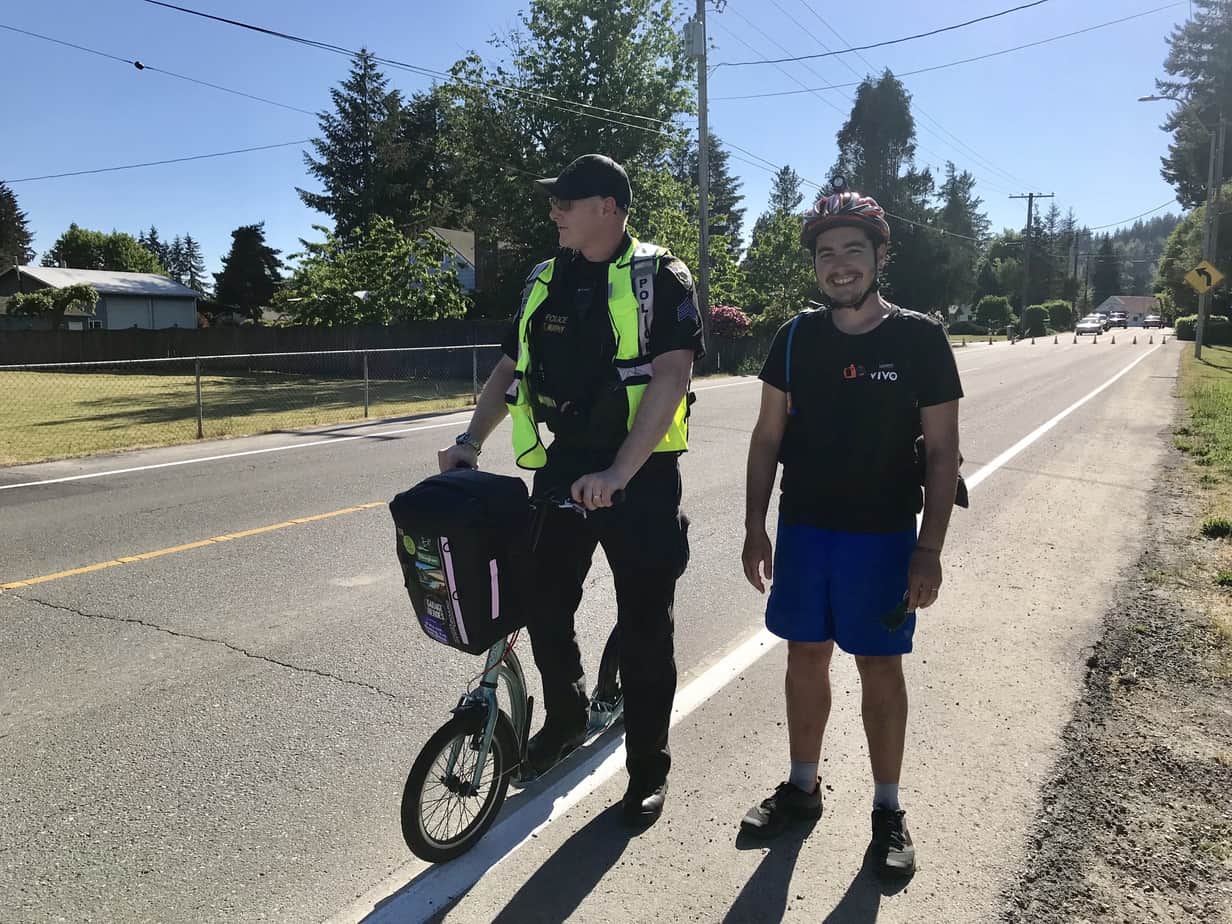 It was our first night in a motel and I was absolutely spent by the time I got there. 80km we’d done that day!! I didn’t have an ounce of energy left. I had a hot shower, a good stretch and tucked into some carrots and dip for dinner. It’s hard shopping for meals in the supermarkets here as portions are so huge. This was the best we could do.

Before bed we watched a film on Netflix enjoying switching off from adventuring for a while. My legs were literally pumping from the days scoot.

The next day, as always, I woke up surprised by how quickly my legs had healed.

The worst campsite in the world

With another long day ahead of us, Gil and I both plugged in to our phones. Podcasts and music have been my saviour this week and I’ve signed up to audible and downloaded Beneath a Scarlet Sky which I’m enjoying. It really does help pass the time. I also enjoyed calling some friends and family back home.

I’m really happy that on the next leg our daily average drops slightly (about 8km daily) even if our rest days are less frequent. There will still be hard bits and tired days but there’s a line between an enjoyable challenge and a miserable one and this week that was too much towards the latter! 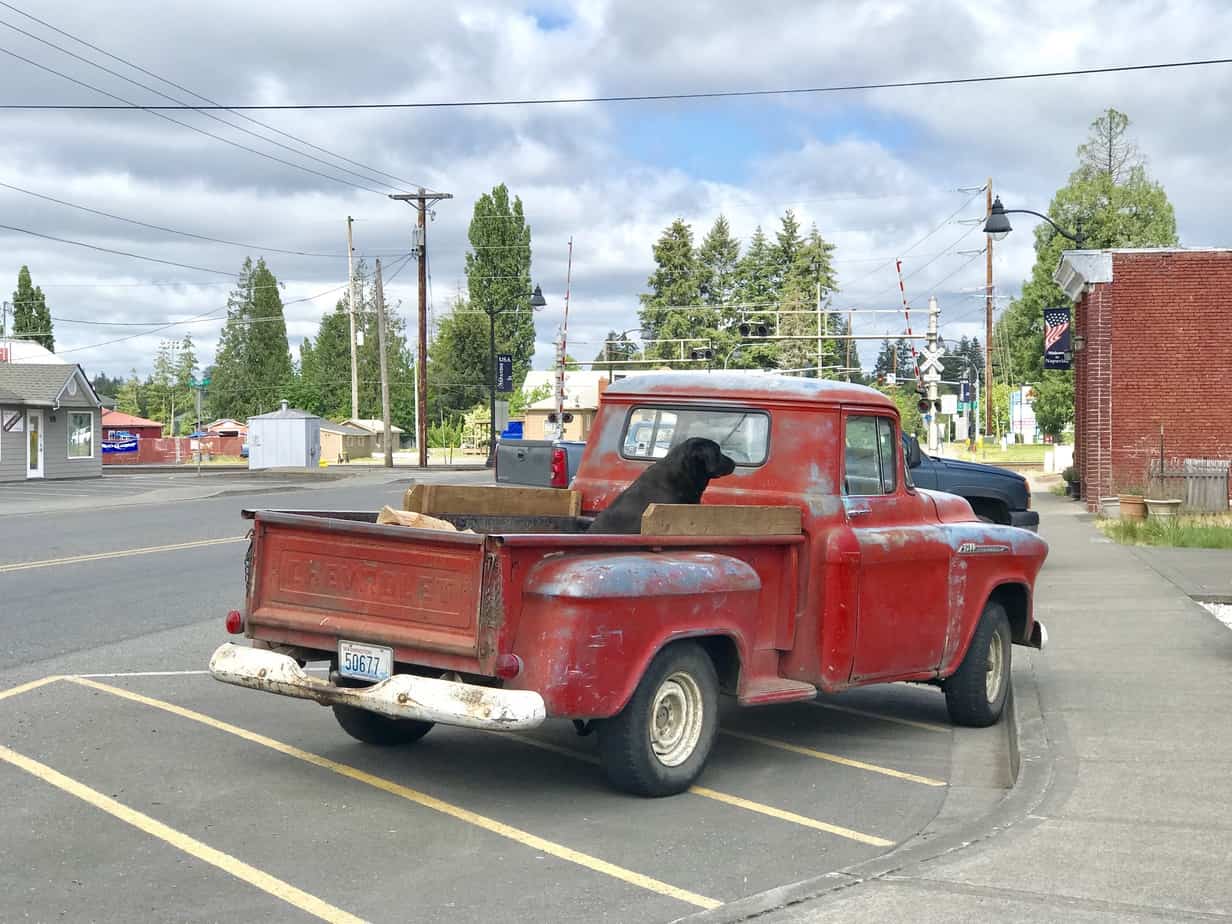 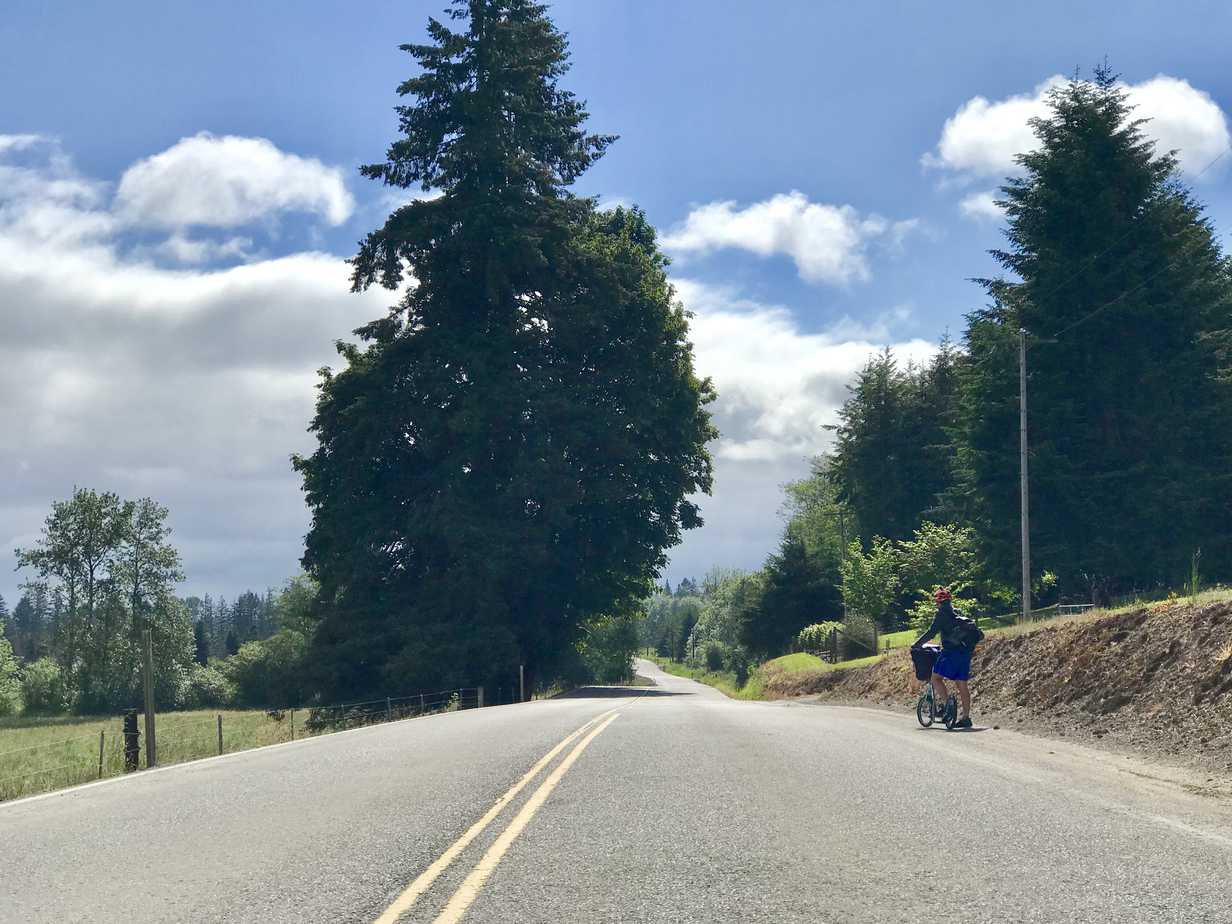 We thought we’d hit the jackpot when Gil called an RV site to ask if they’d take campers and they said yes and that we’d get to use their pool and jacuzzi facilities. It helped to have that focus for the last 28km to get there – which was a good thing as it was all on a gentle incline and on a bumpy gravelly road the entire way.

Full of excitement we jumped straight in the jacuzzi when we arrived. It was as hot and relaxing as I’d imagined. What had been missing from my daydreams earlier though was the noise. The campsite was sandwiched between a huge motorway and freight train line. Our designated camp spot was right by the train line and they passed about every half an hour ALL NIGHT LONG!! And I’m not exaggerating when I say it was like an earthquake. The ground shook and the noise from the trains was so loud that even with ear plugs in it was deafening. 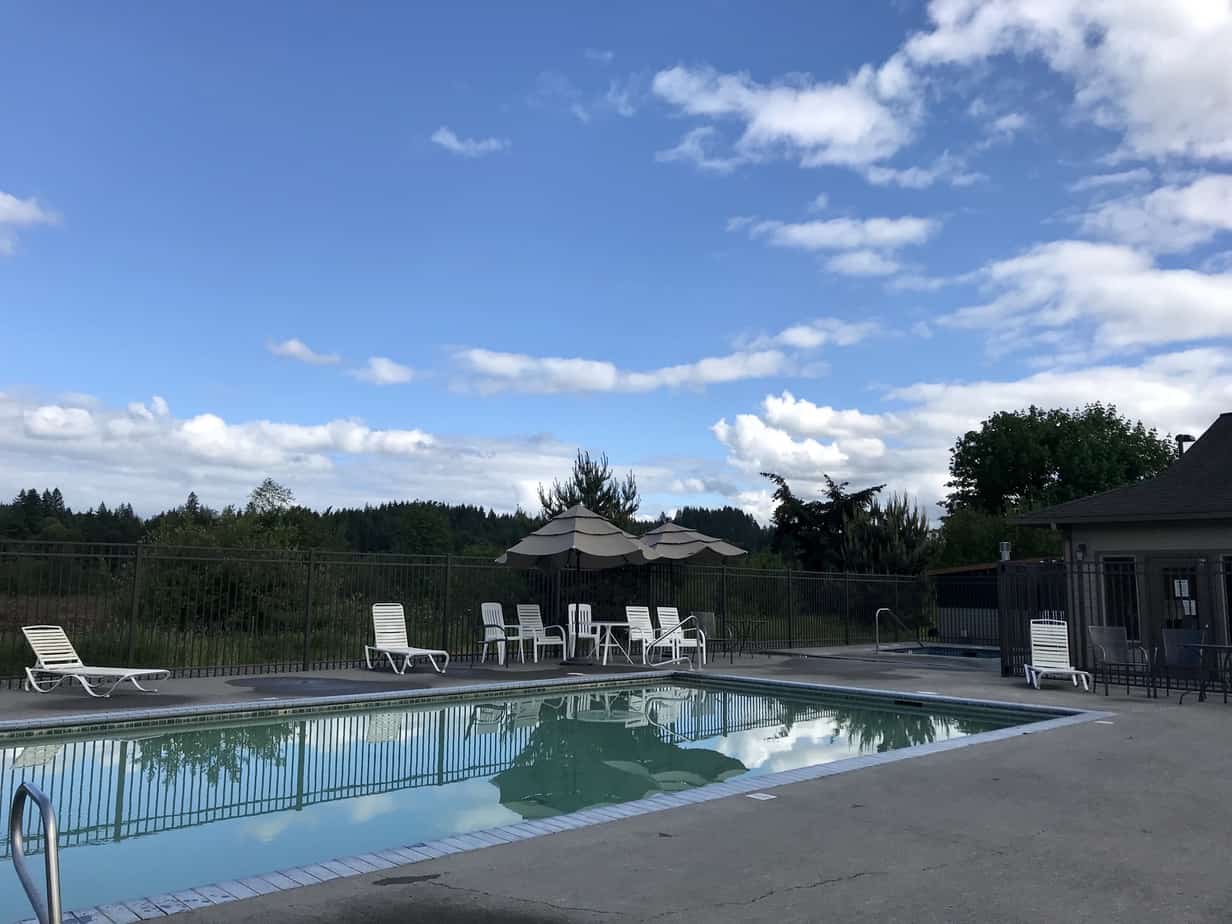 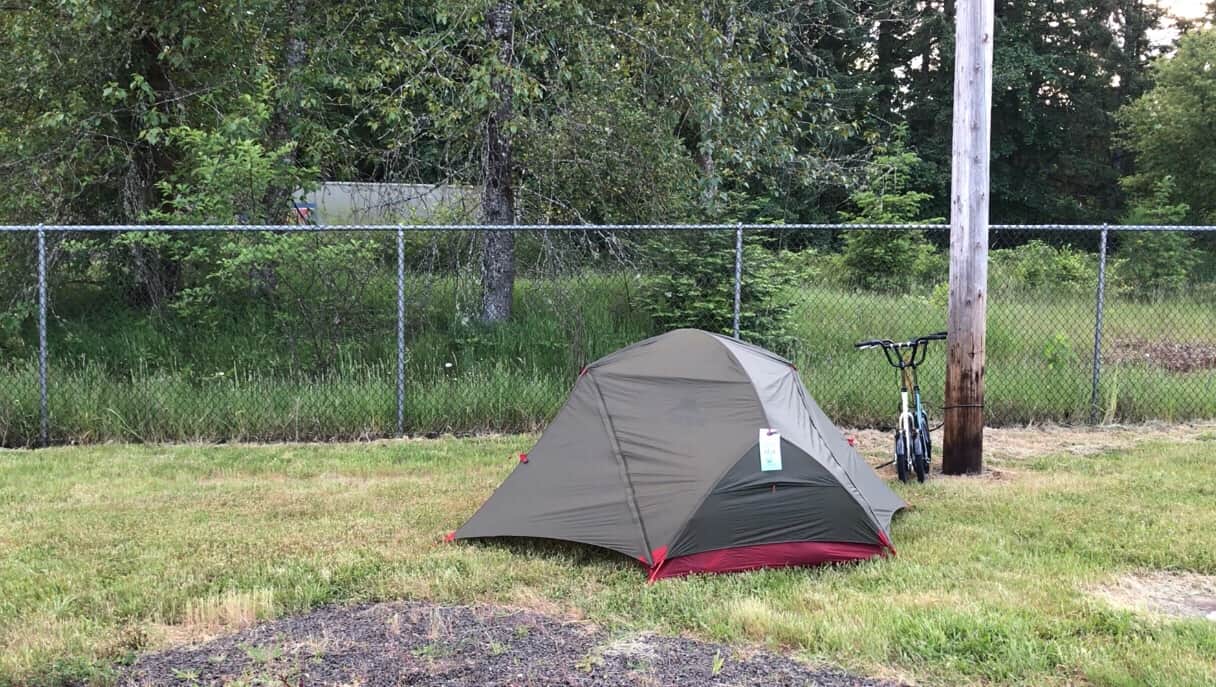 It wasn’t exactly the best nights sleep. I didn’t understand why the campsite was full??!

I had my headphones in one ear as usual the following day and was listening to my new audible book. Gil and I take it in turns navigating using Google maps and today was Gil’s turn so he was ahead of me. We went down a small dip in the road and passed some farm buildings to the left. 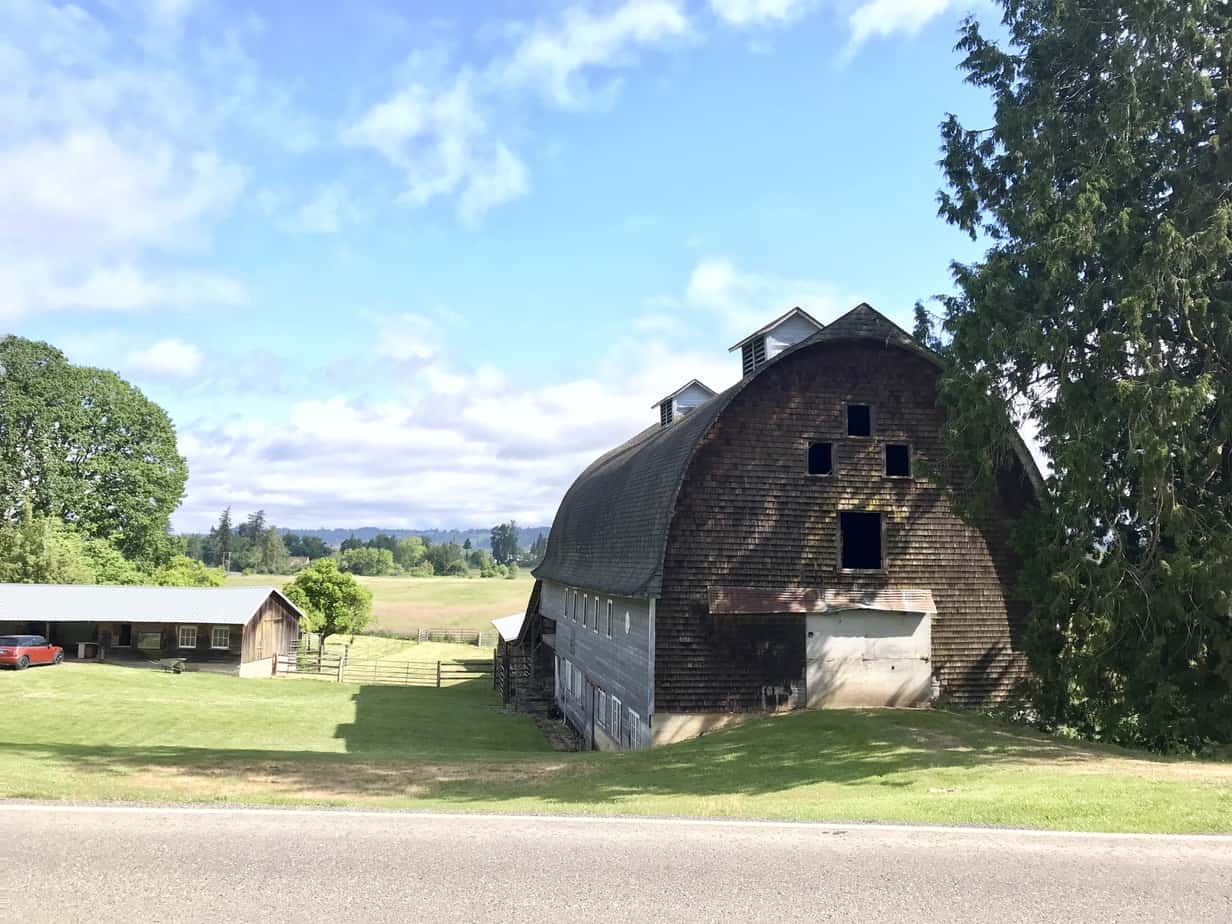 Something caught my eye and I turned to see a huge Rottweiler charging at us at full speed. We get a lot of dogs giving us warning barks and chasing us but I knew that this one was aggressive and meant business – I can read dogs! I also knew that Rottweilers are not a breed to mess with.

Gil had spotted him too. Both of us instinctively stopped and I went to yank my scooter as a barrier between me and the dog. In a split second fear changed my mind though (I probably registered that we had no chance if this dog was going to attack us) and I yelled at Gil to scoot. We both scooted as fast as we could. I glanced back and saw the dog just a couple of feet away from me. I saw it’s barred teeth and drool. It looked crazy. I pushed even harder and anticipated a bite on my leg. When I looked back again I saw I’d managed to pull ahead and the dog was slowing down now panting hard. Realising we were too fast he’d given up.

My heart was pounding and I was shaking with adrenaline. I wanted to go and find the owner and shout at them for not having that dog on a chain but more than that I just wanted to be away from it so we carried on. Every dog that barked at me after that made me jump. Thankfully all the others were behind fences or on chains. Except for one other vicious dog we encounter later on it that day but it was a chihuahua so we just laughed!

The adrenaline rush made me suddenly ravenous so we went and ate a veggie burger with large fries.

I then had a cake/ice cream/chocolate sauce/cream combo thing. The waiter accidentally brought us a second one not realising we’d already been served…..so I ate that one as well. So it wasn’t an entirely bad day!