#7 Kicking the States; it all just stopped being fun 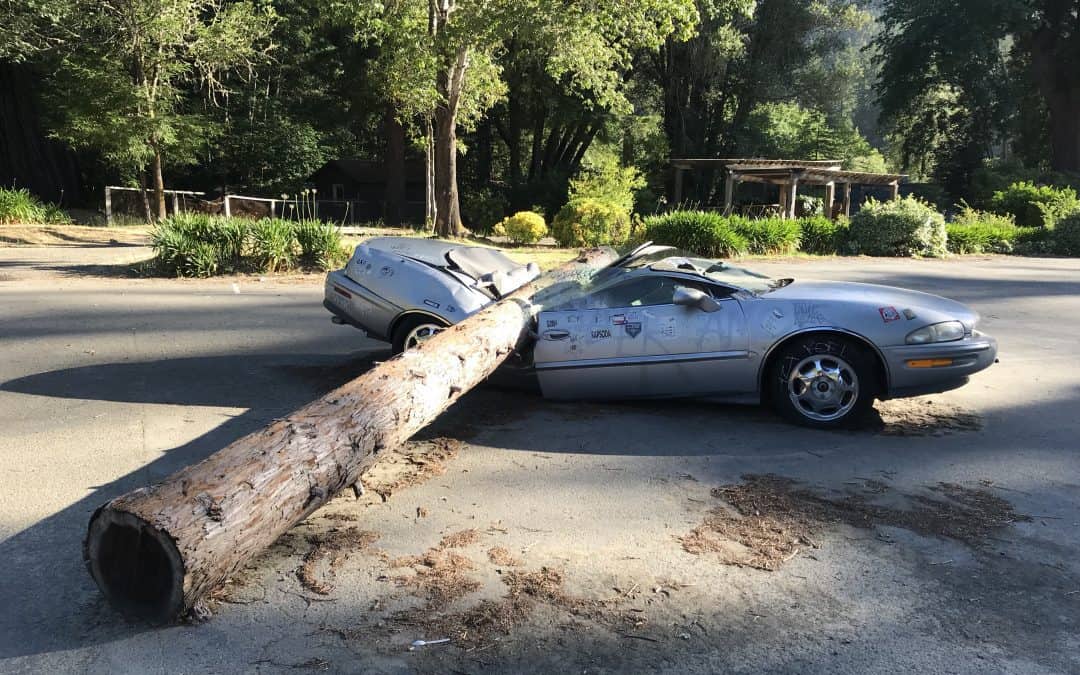 We had a really lovely stay with Stephanie. She’d heard about our scoot because she’s in the Love Her Wild group and had offered to host us for a rest day which was hugely appreciated. She lived in a town called Eureka (yep!) which has a huge mansion, an old fashioned downtown centre and a lot of homeless people. On the way in we stopped for lunch with James and Gemma who we’d met previously at the Elk Prairie campsite…it was great seeing them again! 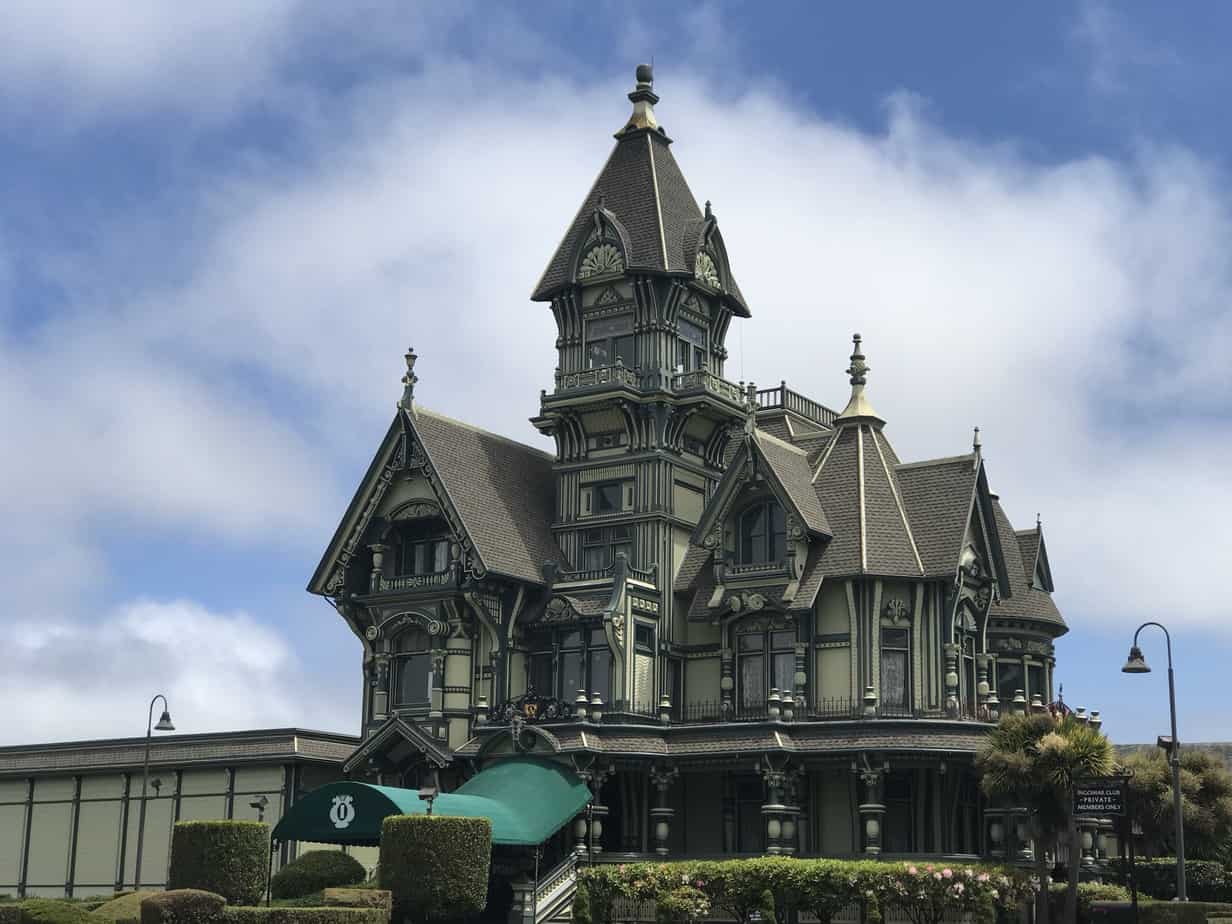 It wasn’t the most relaxing day as we had a lot of jobs to do. I answered emails, organised some Love Her Wild expeditions I have coming up, caught up with my blog and we went to the shopping mall so Gil could replace his shorts. Thank goodness…I was starting to worry he’d get arrested if that hole got any bigger.

The highlight of the day though was heading to Stephanie’s parents for a delicious and wholesome meal. Yum! 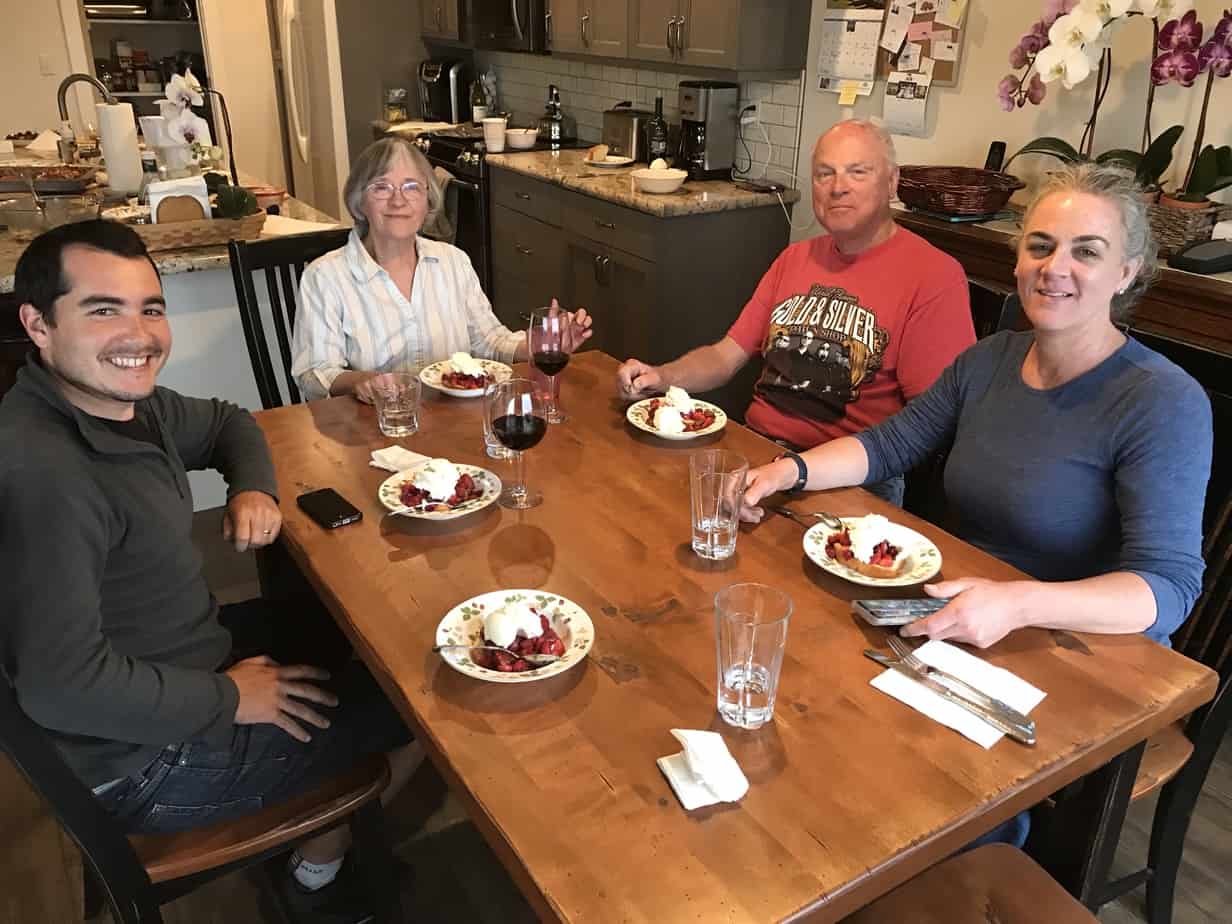 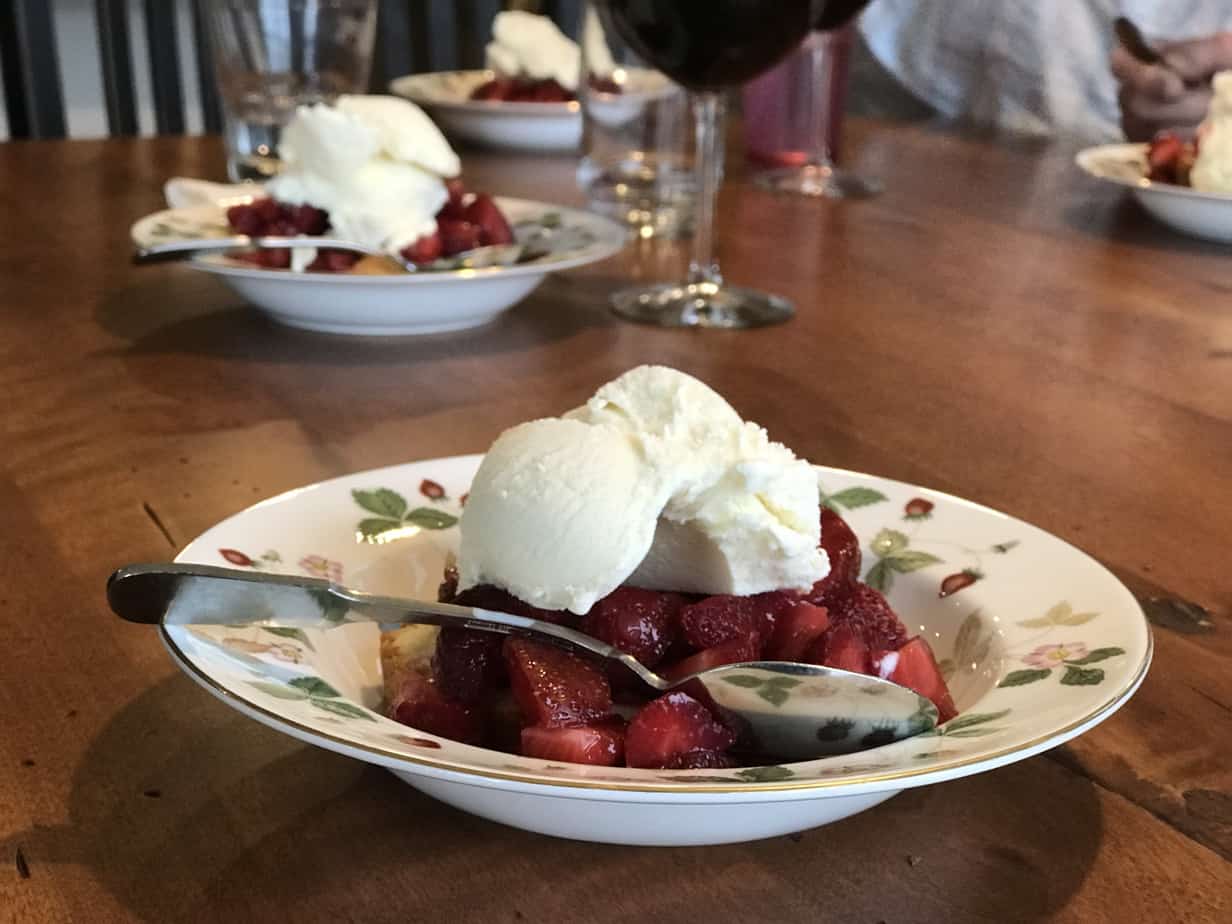 It was so difficult getting going in the morning. It took about 3 attempts of getting out and then back in to the bed before we finally actually left. The rest day had gone so fast it felt like I needed another one. It didn’t help that it was cold outside. But if course…as soon as I got in to the swing of things it wasn’t so bad. 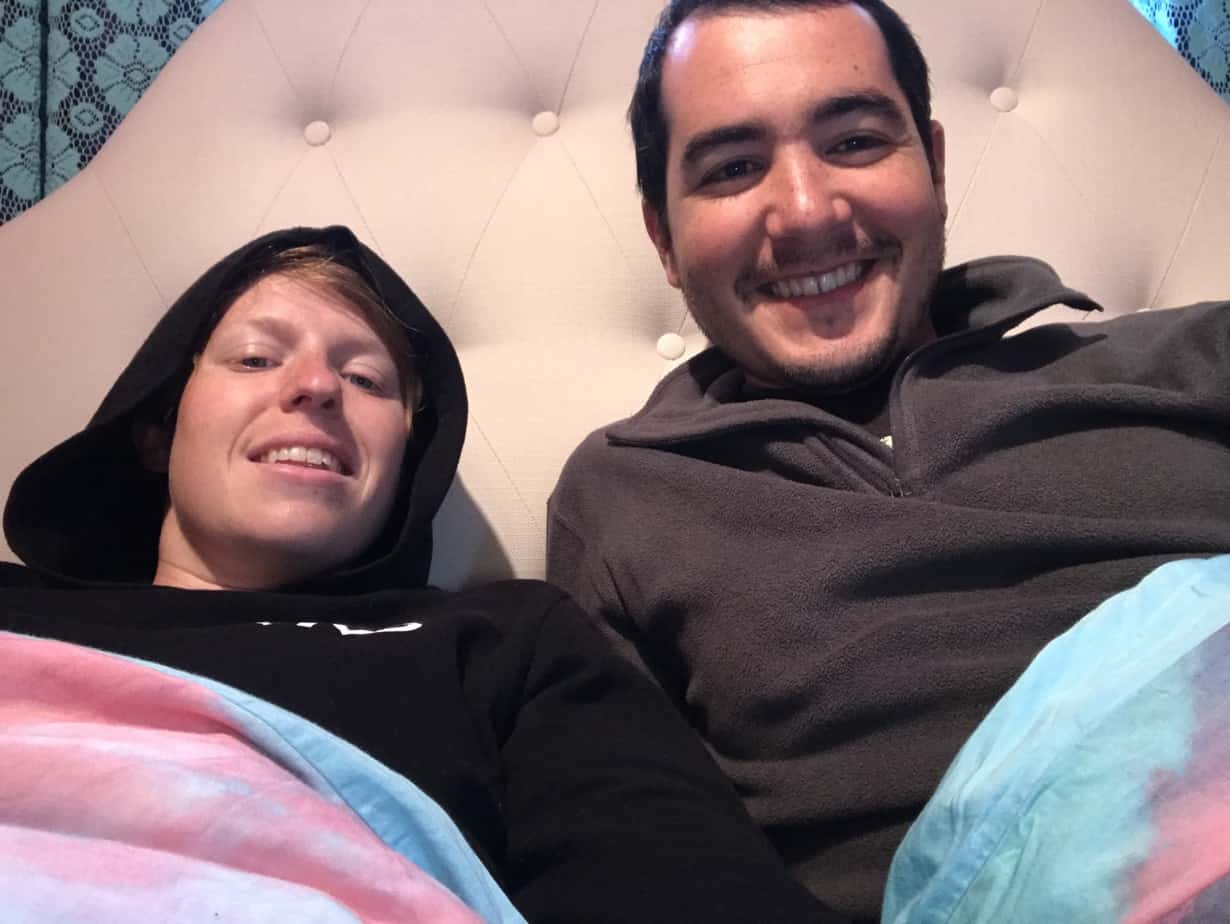 I knocked my foot on the scooter about 3 days ago and it’s still swollen and bruised. 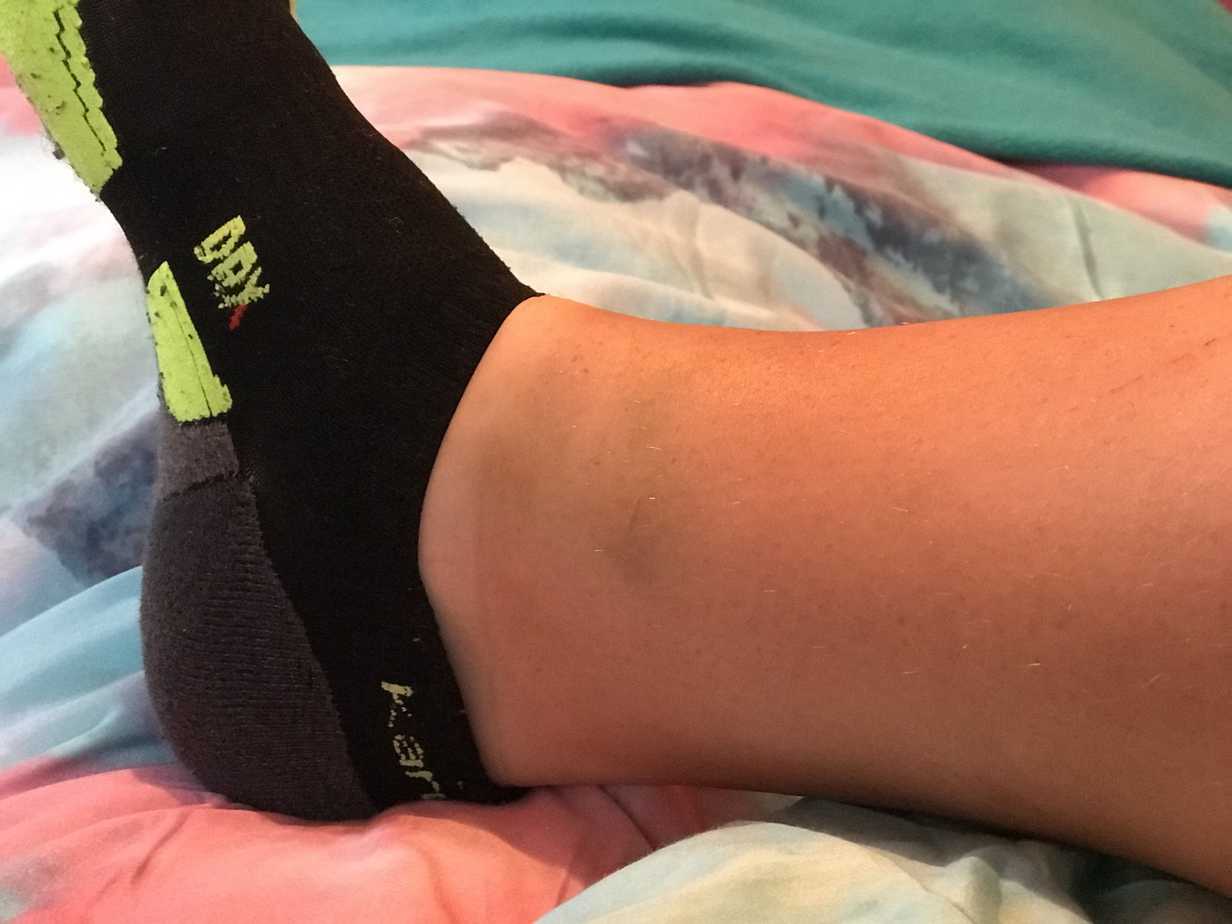 I made some calls home which is the best way to pass the time, speaking with my sister and a couple of friends. We took a side road which was quiet and pretty but took us up a humungous hill. The hills are slow, sweaty and hard work and the only thing that gets me up is knowing the fun down that comes after. 5 later and we reached Fortuna where we grabbed lunch in Fat Anne’s. They kindly packed us off with some freshly baked scones to have as a snack later. 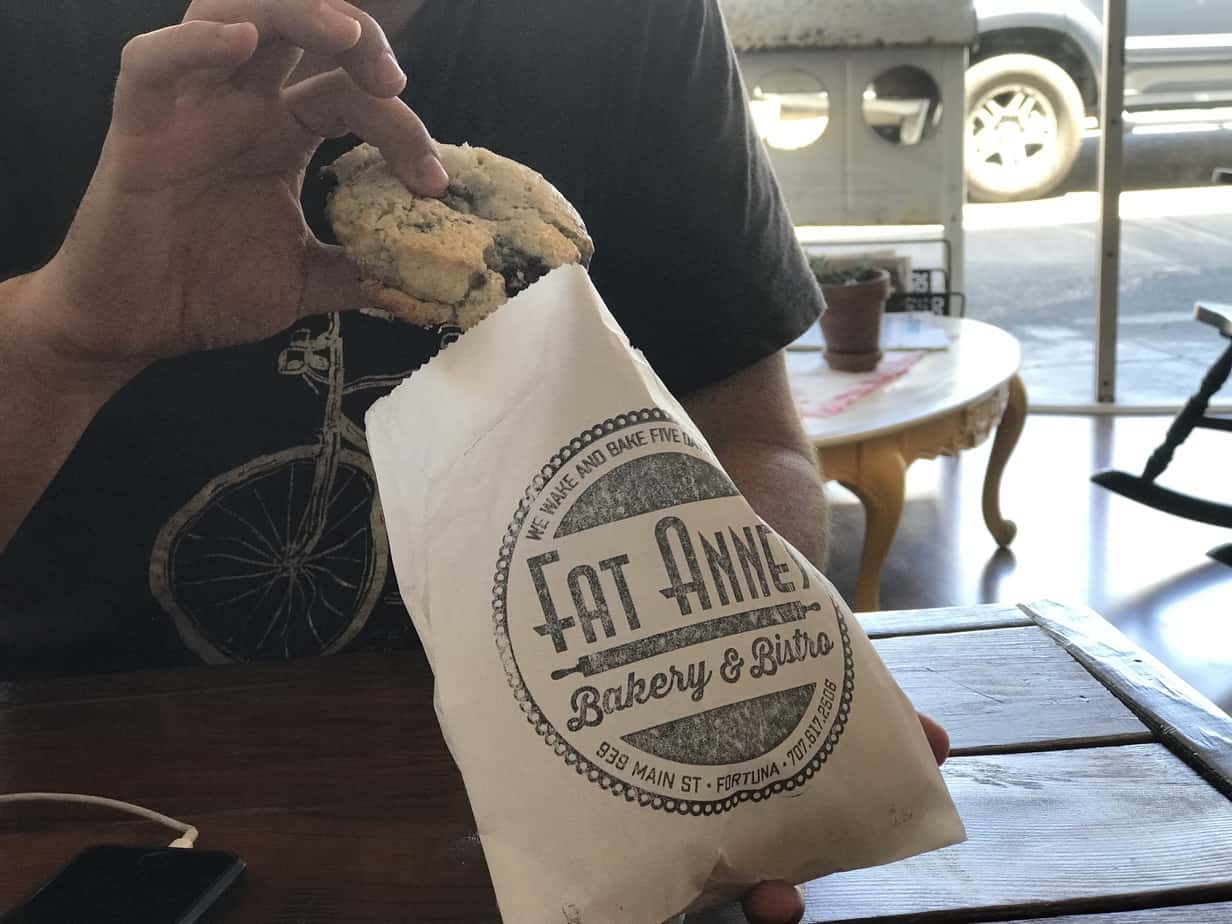 We joined Highway 101 for a long stretch until we reached Rio Dell which we cut trough as a detour. Stuck in the middle of nowhere this town didn’t seem to have much going for it other than a humungous logging plant. 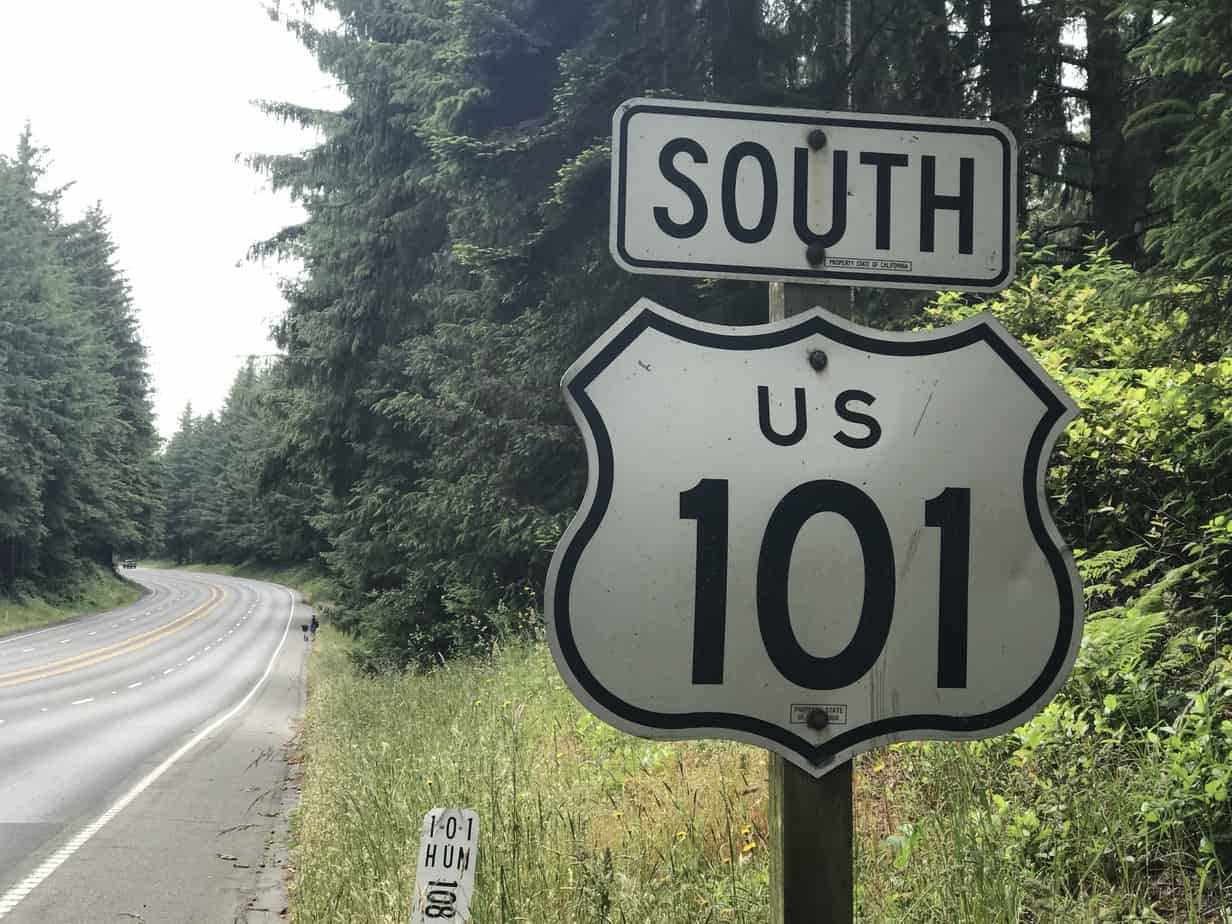 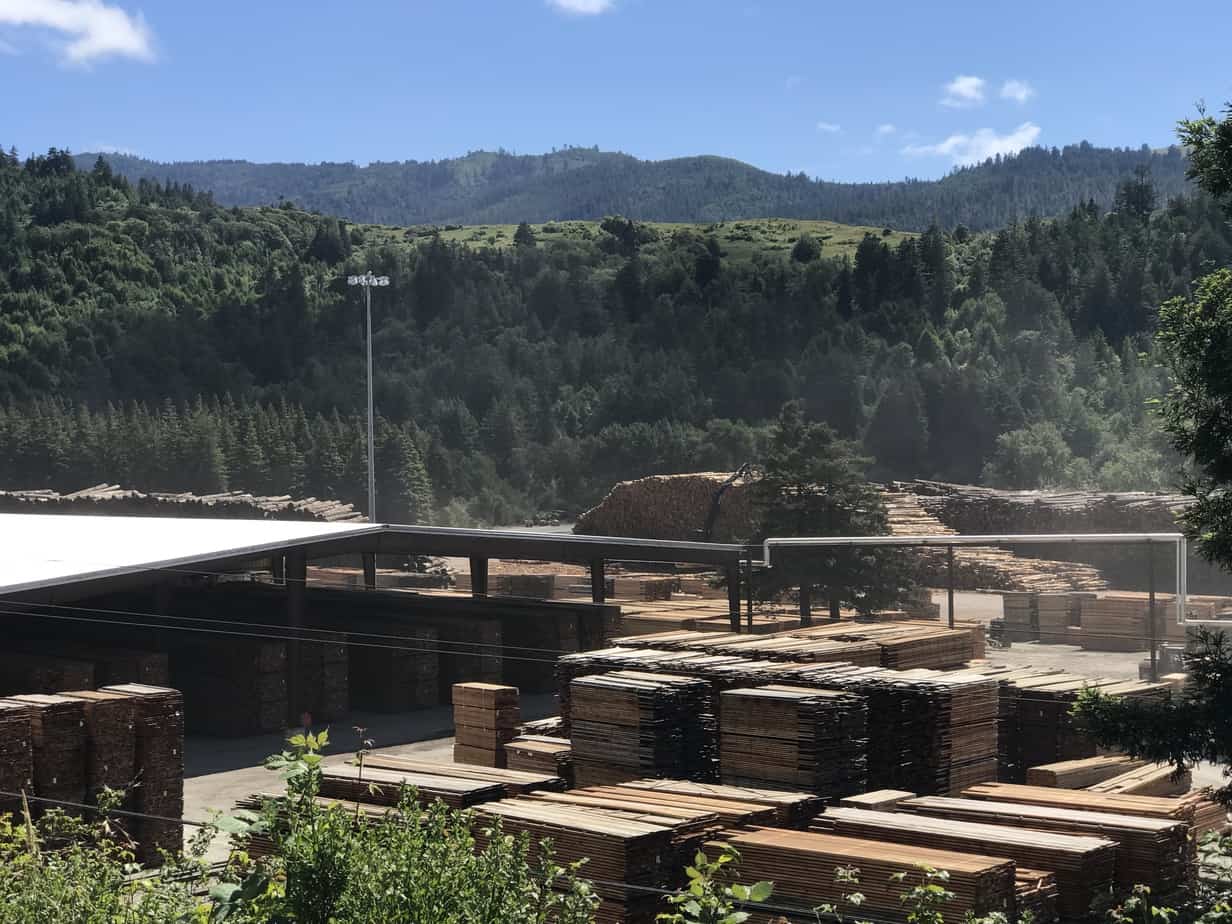 As it was getting late so we thought we’d try our luck camping in someone’s yard. Up until now everyone we have asked has said yes – a 100% success rate. Well that was soon to deteriorate! We asked 4 people and they all said no. In fact none of them were particularly friendly. It was really disheartening and we had no choice but to push on another 6km to an RV site. The owners gave us a discount when they heard what we were doing which restored my faith a bit.

We had a great fire that evening sat chatting to 3 blokes – 1 Scottish, 1 Canadian and 1 South African (no punchline I’m afraid) who were on a motorbike trip. They sat around the fire drinking whisky and smoking cigars…of course!

The scariest moment of my life

We joined a road called ‘the Avenue of giants’ which we would be following for the next 2 and a half days before joining Highway 101 again. It was endlessly scenic. We’ve been in amongst the redwoods for some time now but their impressiveness doesn’t rub off. 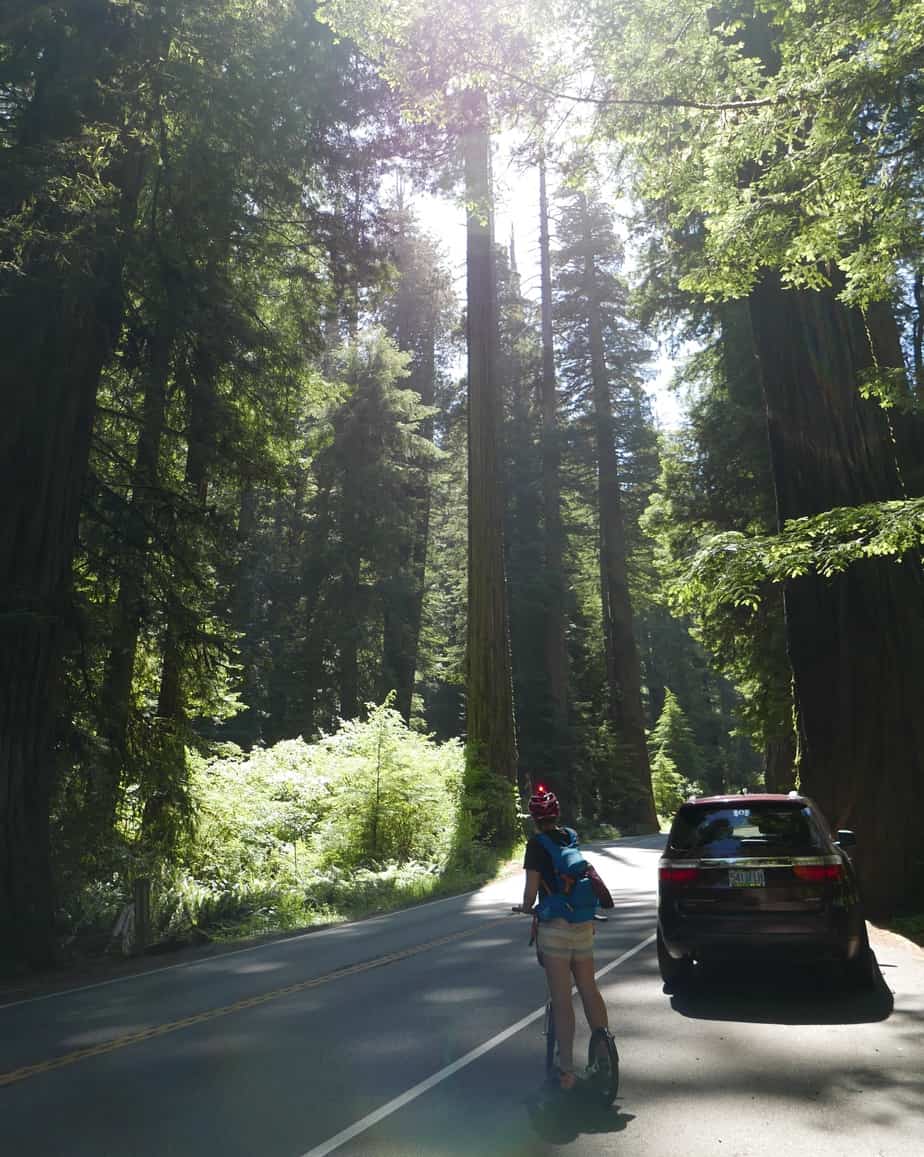 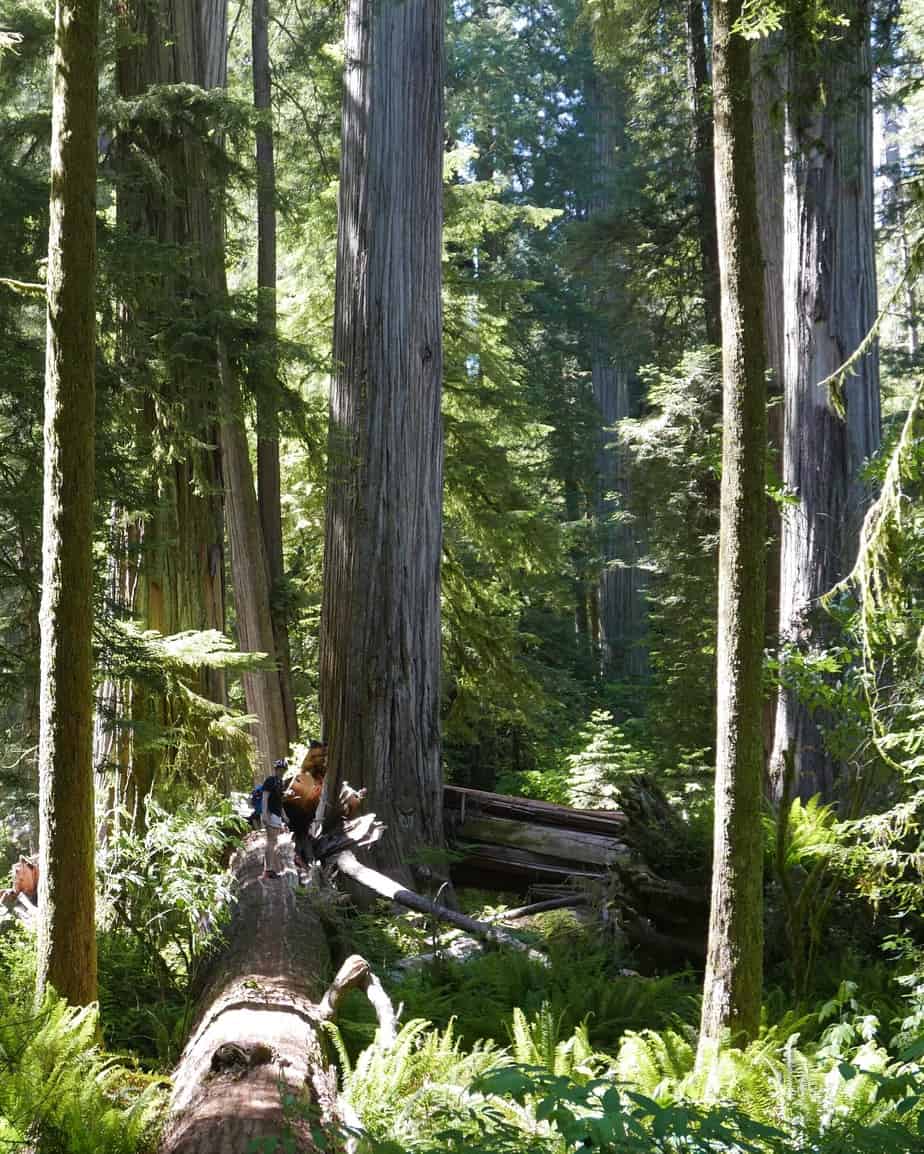 It was a long 52km day to reach our camp for the night, Hidden Springs. I was so happy when we saw the sign as my body was starting to give up entirely. I was so jealous of all the cars and the people sat on their arses in aircon.

We pitched up our tent, stretched and showered as usual. We sat in our tent escaping the mosquitos to eat our dinner (bread and cheese!) and chatting about what our plans are following the scoot. 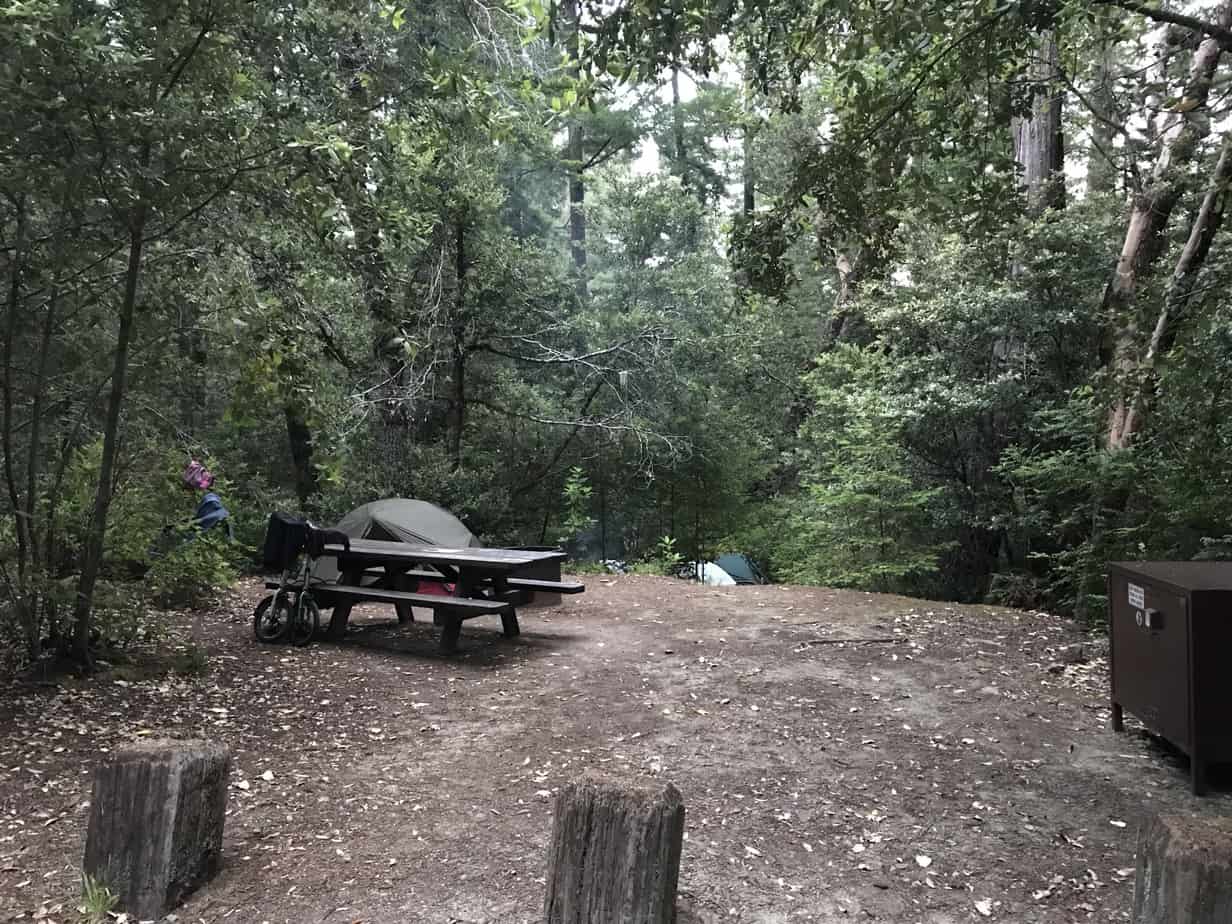 Suddenly there was a massive snap which I thought was a huge branch falling off a tree. There was a split second of silence followed by the deafening and unmistakable sound of a huge tree splitting from its base. SO LOUD!!!!! It went on for probably just a few seconds but the moment felt a lot longer. I knew it was close and I panicked as I felt that heart wrenching belief that the tree was about to fall on our tent. I scrambled for the zip but knew it was helpless – there was nothing we could do. By the time I managed to find it and both of us had jumped out of the tent, the tree hit the ground with a huge boom which shook the ground.

My initial relief that it hadn’t hit us was replaced by worry that someone else had not been so lucky. I ran around the alcove that our tent was tucked away in and saw the huge redwood tree blocking the path just metres from us. It was massive, maybe 30-40 metres and it had just fallen over – no wind or storm. 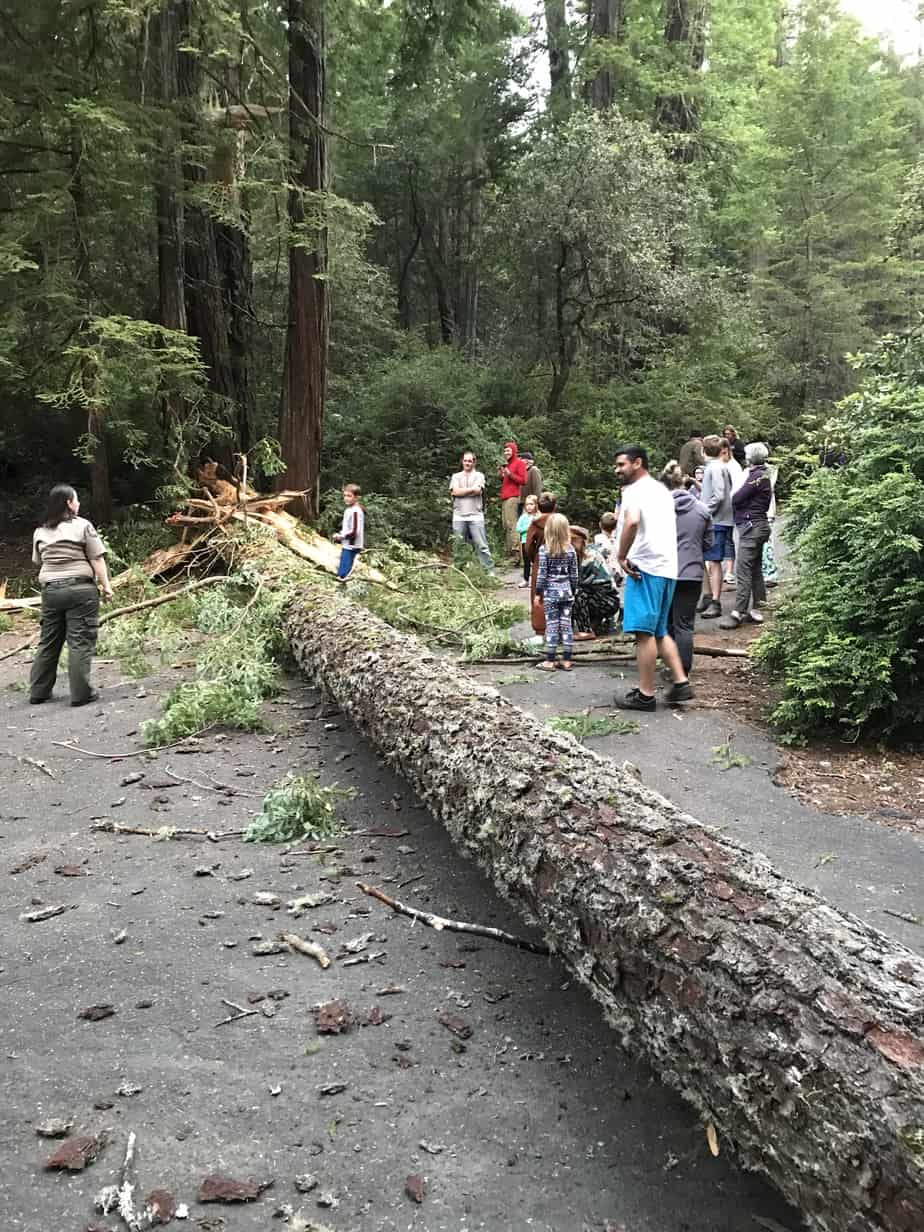 There was a car very close by but thankfully no one had been hurt. Within minutes dozens of people had gathered. My heart was pounding through my chest and I felt in shock knowing that we had been so close to what would have been certain death if the tree had fallen in a different angel. It felt so lucky and unlucky at the same time!

I didn’t sleep well that night and even the next day every snap made me jump!

I think that was honestly the scariest moment of my life and I can’t stop replaying the sound in my head. Although I also keep thinking of the amazing smell that followed it…who knew a fallen tree smelt so good?!

Check out my reaction just after the tree fell:

We waited for the fallen tree to be cut and moved so the road was clear for us to be on our way, much later than we’d normally set off. That turned out to be a disaster as it was such a hot day. By noon it was unbearable. I was dripping with sweat and no matter how much I drank, I could quench my thirst. But worse than that was how tired I felt – everything in my body hurt, my legs were like lead, my motivation and energy levels were at rock bottom. And every push on the scoot felt like an effort. 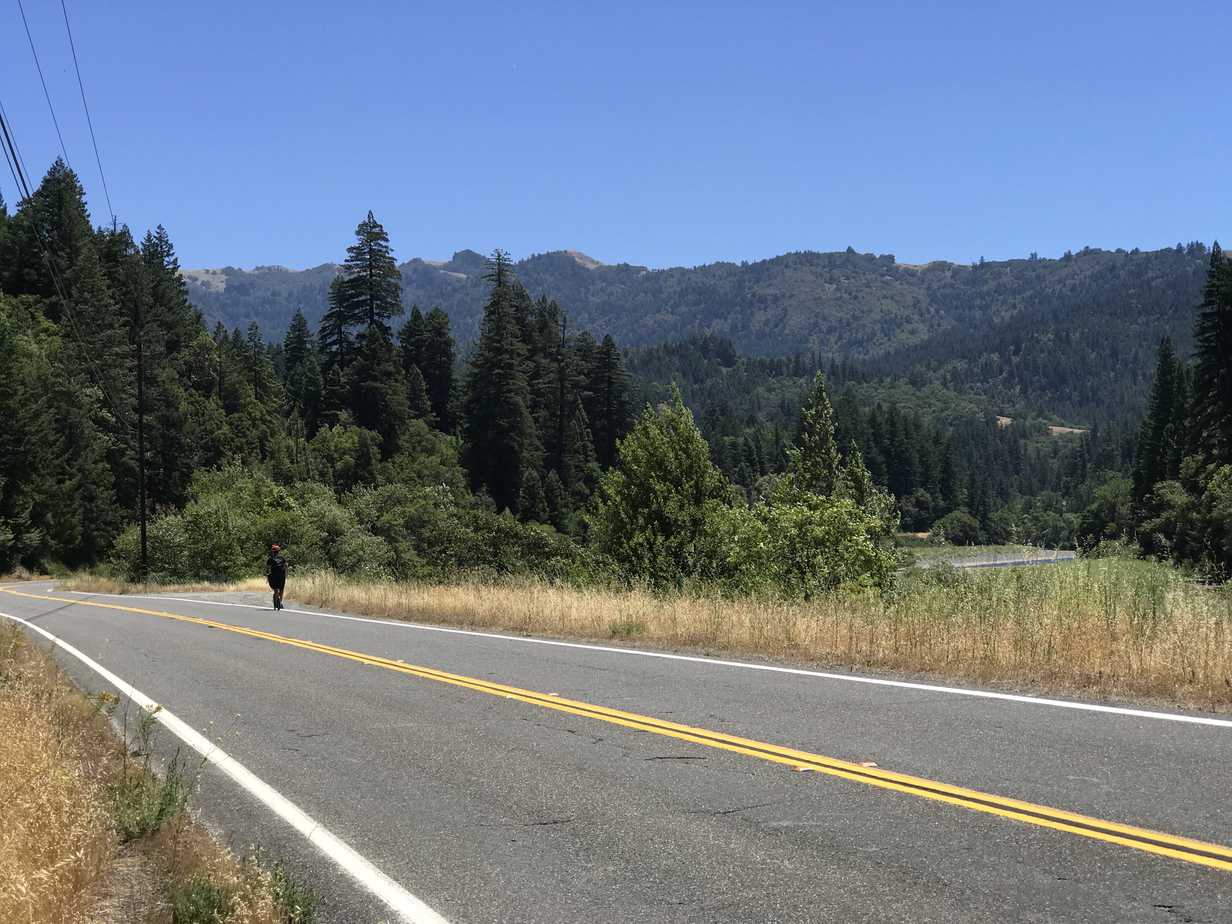 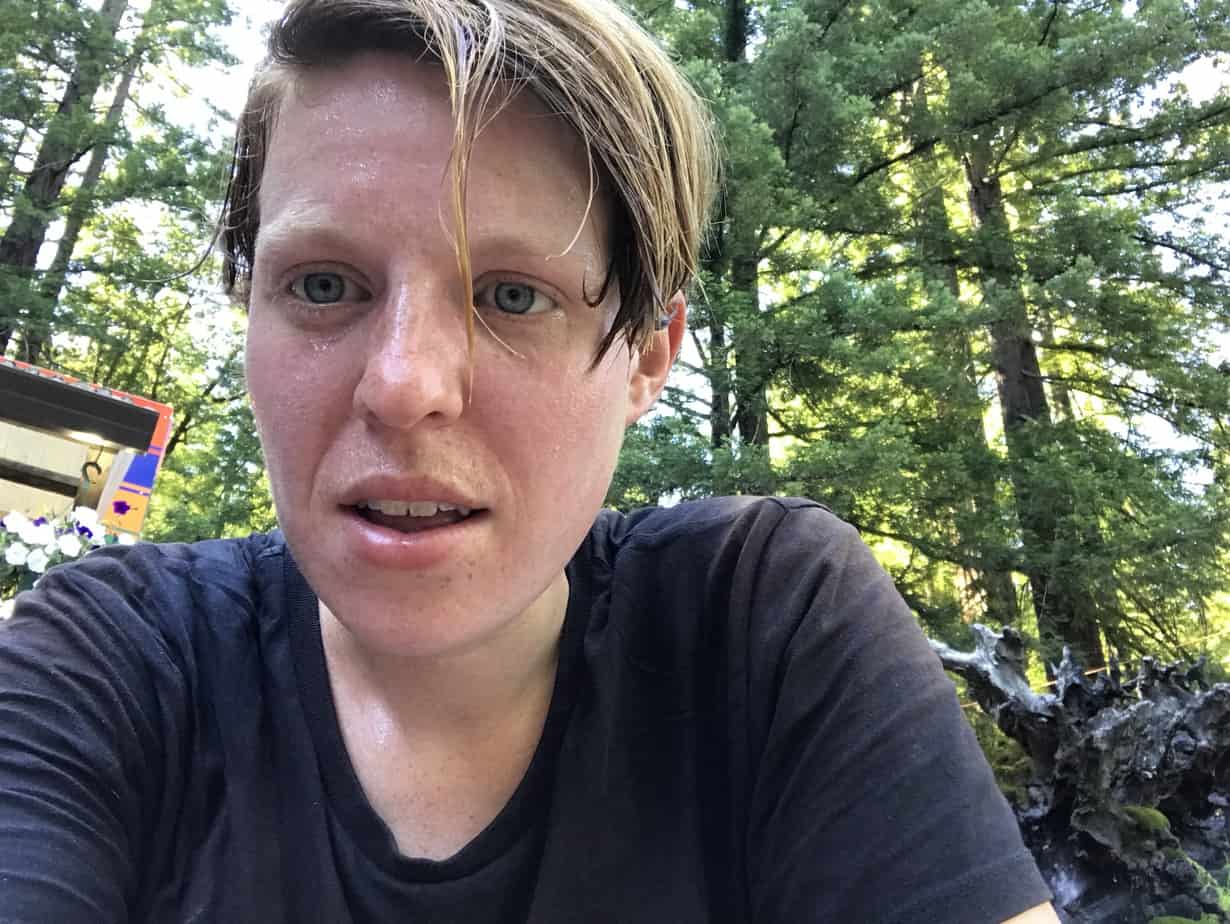 As soon as we reached the campsite I ran straight to the river and jumped in with my clothes on letting the water cool me down. I did a quick check on the trees surrounding us before putting up our tent!

The amazing Stephanie drove all the way from Eureka to bring us food supplies…what a star! It was a good distraction from my exhaustion and I don’t think I could have faced our alternative dinner which would have been dried pretzels and nuts. 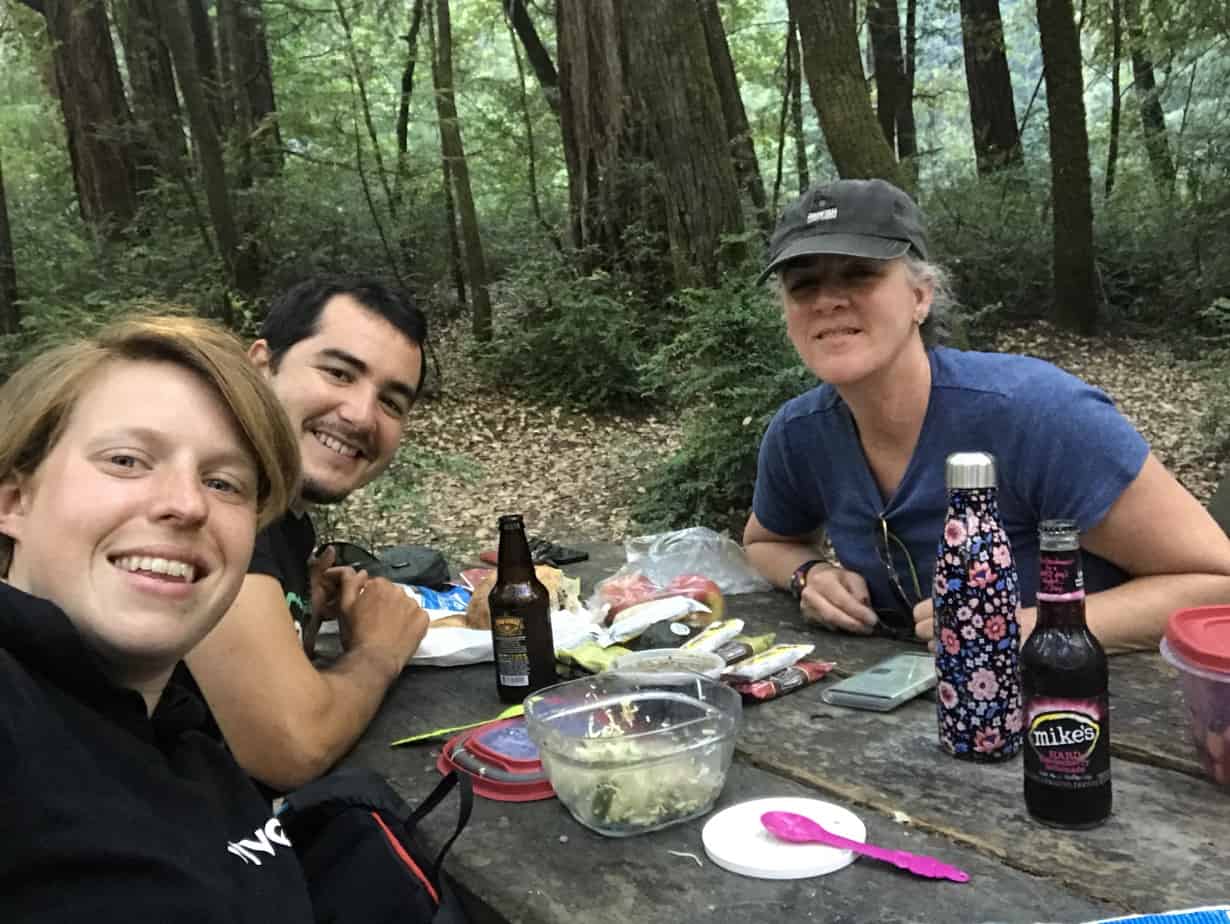 I crashed that night into a deep and long sleep. I hoped I would feel better the next day but I didn’t. The 45km day felt so painfully long. I was trying to stay positive but it was really hard. I knew the next day we had a massive 60km to cover which I didn’t know if I could do. I was fed up of camping and gutted that our fundraising had come to a standstill.

Just as I was trying to list positive things in my head to change my mood a car slowed down to shout ‘f***ing idiot’ at us. Once in a while we get sworn at or a finger and I really don’t get why. And it always makes me feel a bit rubbish.

To balance this out I should say we also get tons more people waving, beeping their horn enthusiastically or stopping to take pictures. 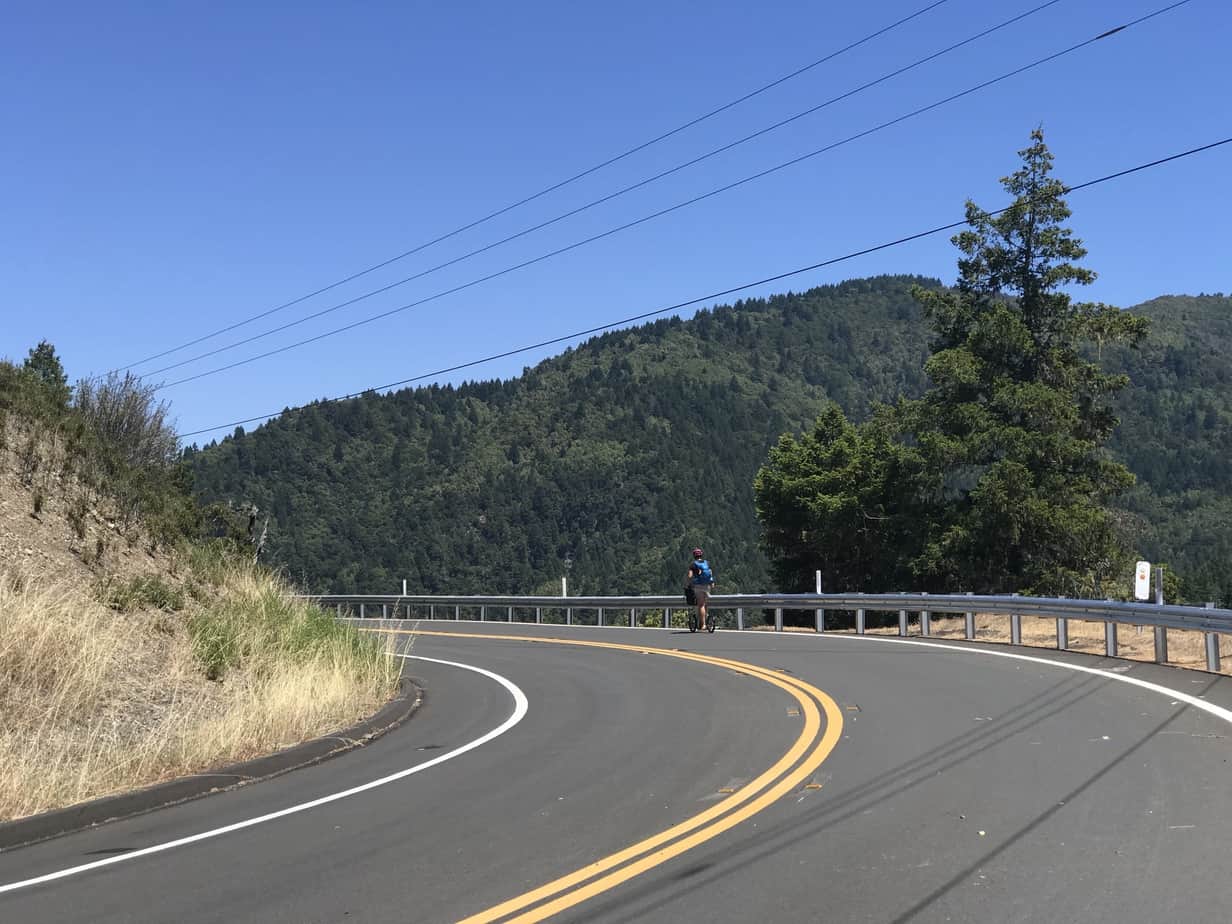 Shower, food and a bit of rest that night helped a bit. I think it’s a combination of things that have caught up with me – being ill and on antibiotics, nearing the halfway mark and feeling fatigued, plus having a long and eventful week full of bears, guns and trees wanting to kill us.

It’s my 30th birthday in less than a week and I’m really hoping I can shake my mood before then! 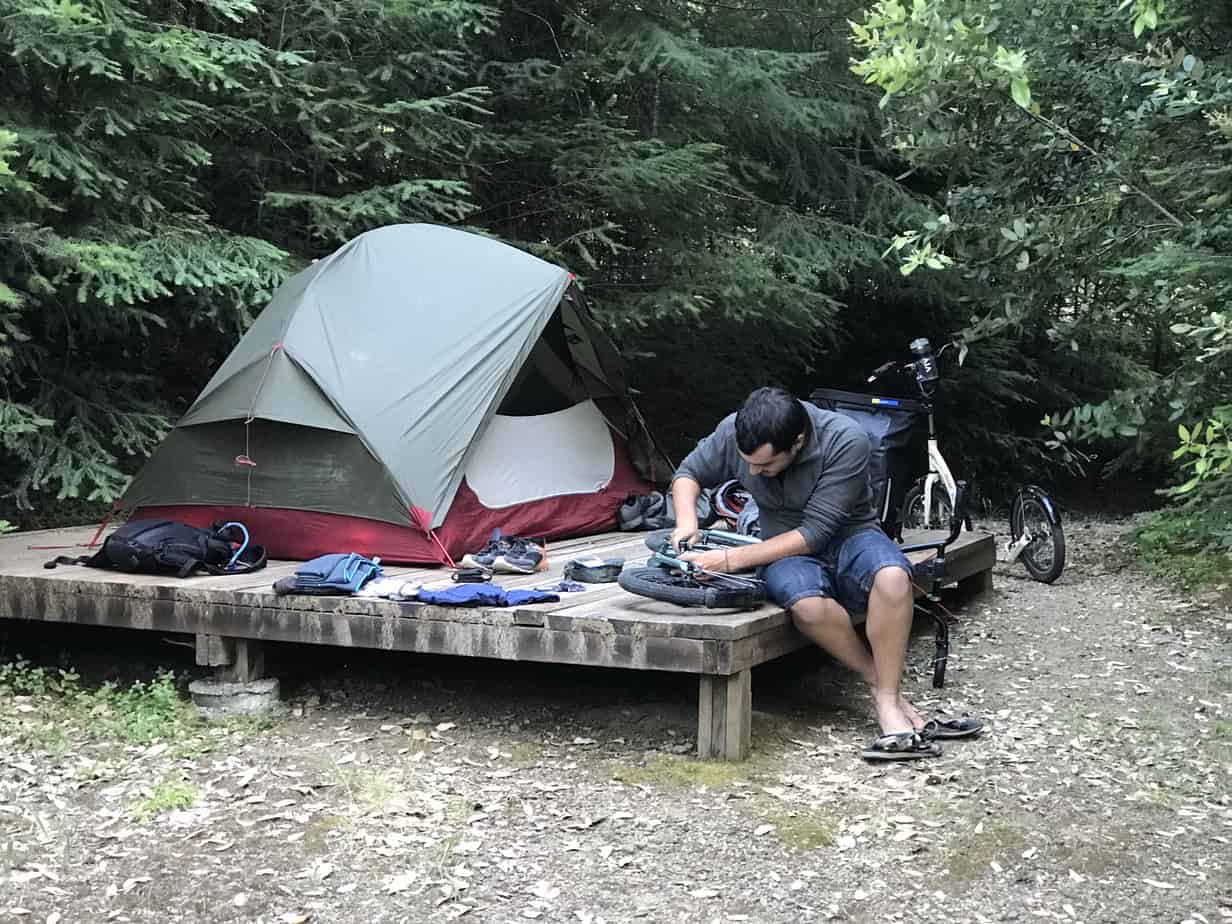