Walking Israel: I want to be anywhere but here 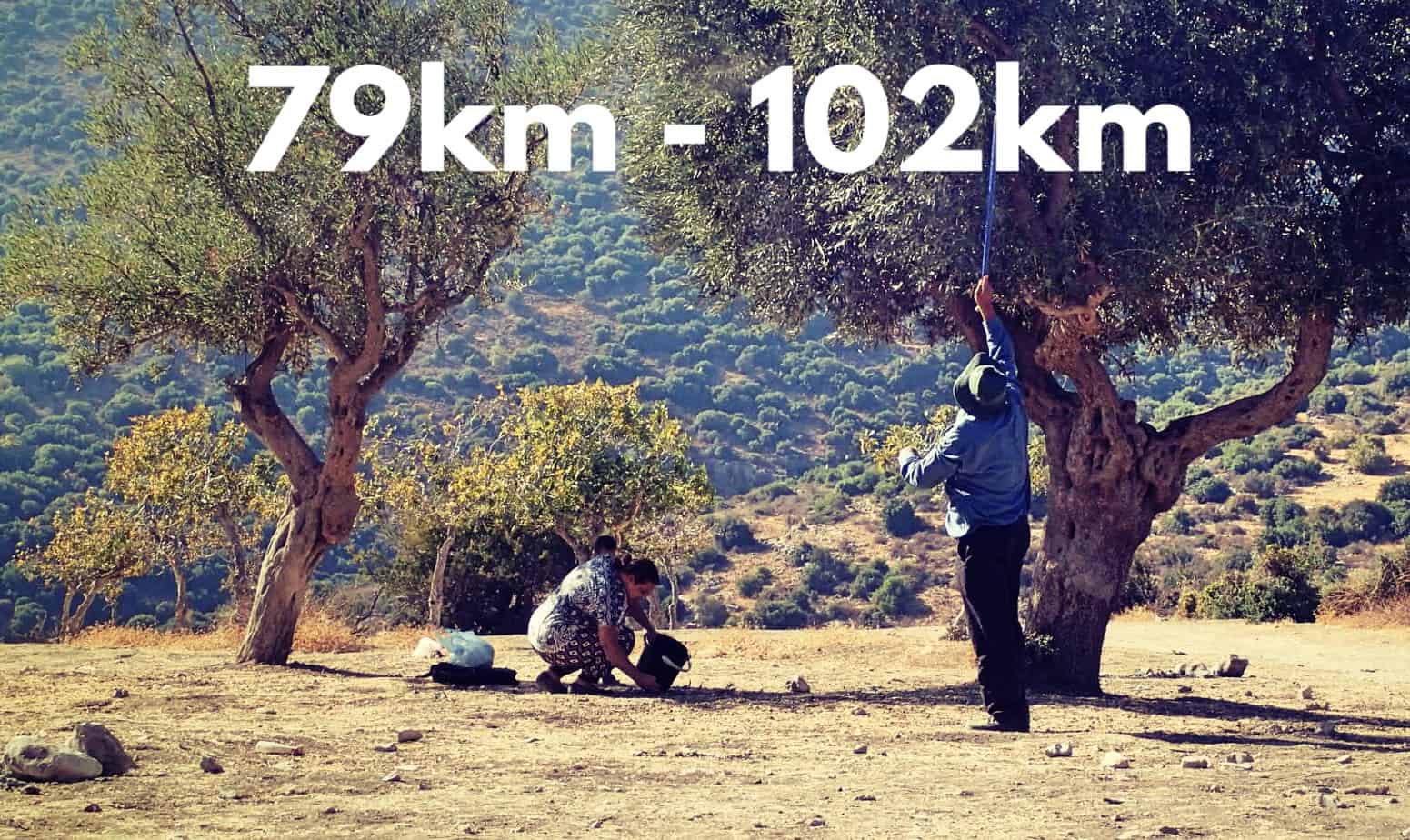 Unfortunately, we couldn’t stay by the oasis forever so reluctantly threw on our packs and headed off. My relaxed clean state didn’t last for long. The dusty hot trail soon turned me dirty and sweaty. Until now I had been really optomistic, even during the tough parts, but I was feeling my enthusiasm for the walk drain at a quick rate. Relaxing by the water had been so nice and I didn’t want to go back to tough walking and wild camping. I trudged on though, ignoring my bad feelings.

Because we were in a reserve we had to camp at a designated spot, a ridiculously steep half a km climb facing the midday sun. When I reached the campsite it was a state – scruffy and covered with rubbish. I felt my strength dip for a split second and that’s all it took for my frustrations and emotions to flood in. I didn’t want to camp in this disgusting spot, I didn’t want to feel dirty any more.

I cried. Then I pulled myself together. 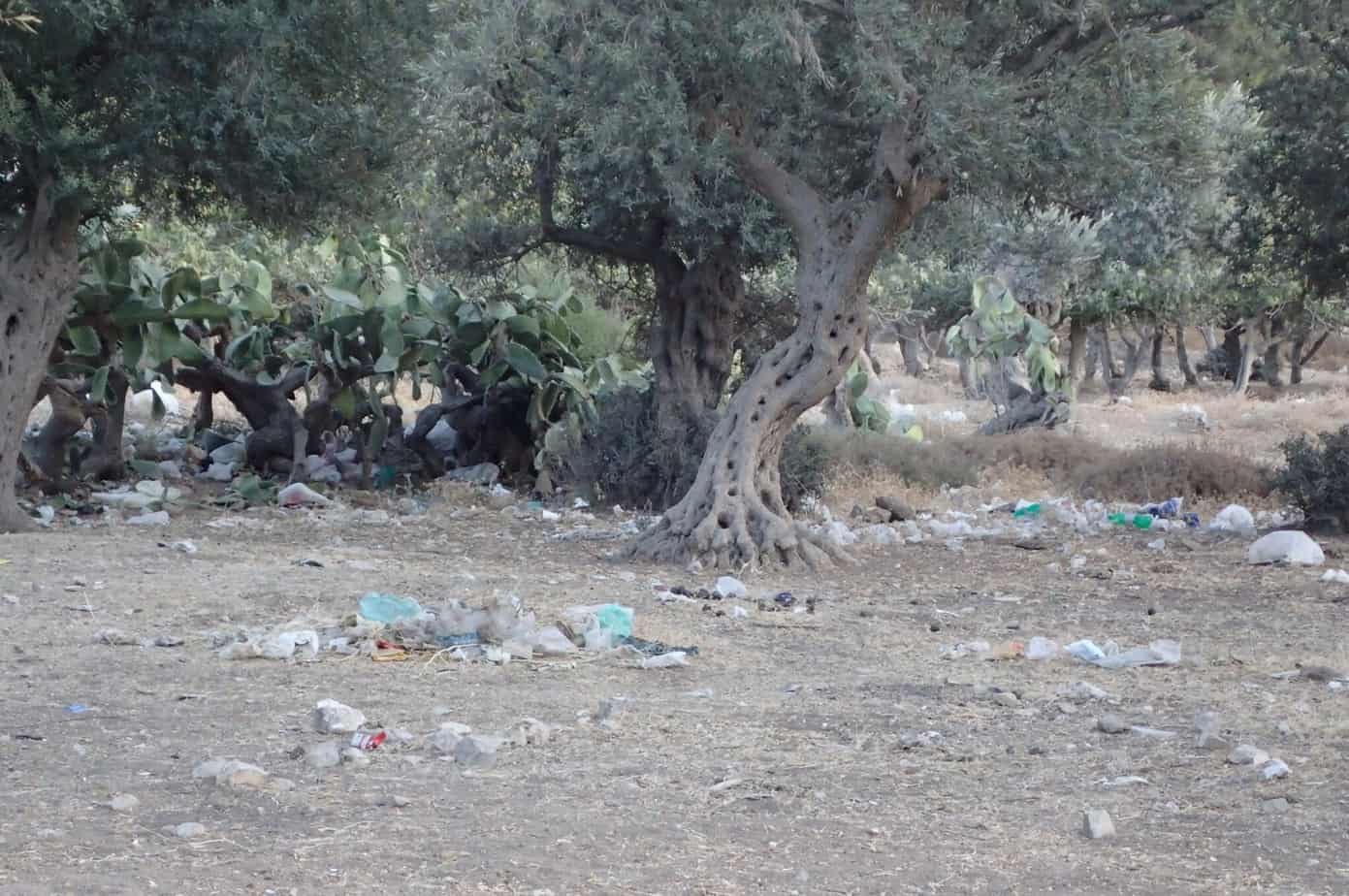 We carried on and found a slightly better spot that was near a man made Spring. Although the area was still a state (which is such a shame as it was surrounded by wonderful olive trees), at least we had the water for soaking our feet – any form of water is a luxury when camping in Israel. I focused on the positives. 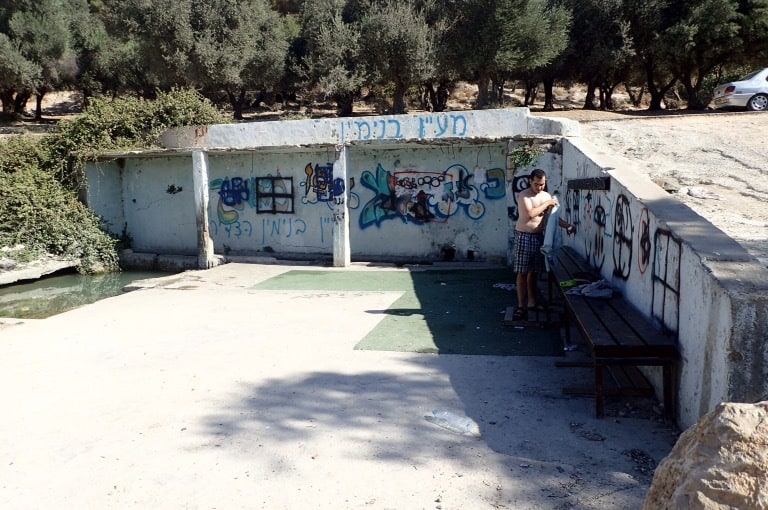 (We had run out of drinking water so some policemen, who were checking if we had drugs, drove Gil to a nearby gas station. They ended up abandoning him there so he had to hitchhike back. He left in a police car and turned up again on the back of some random quad bike!) 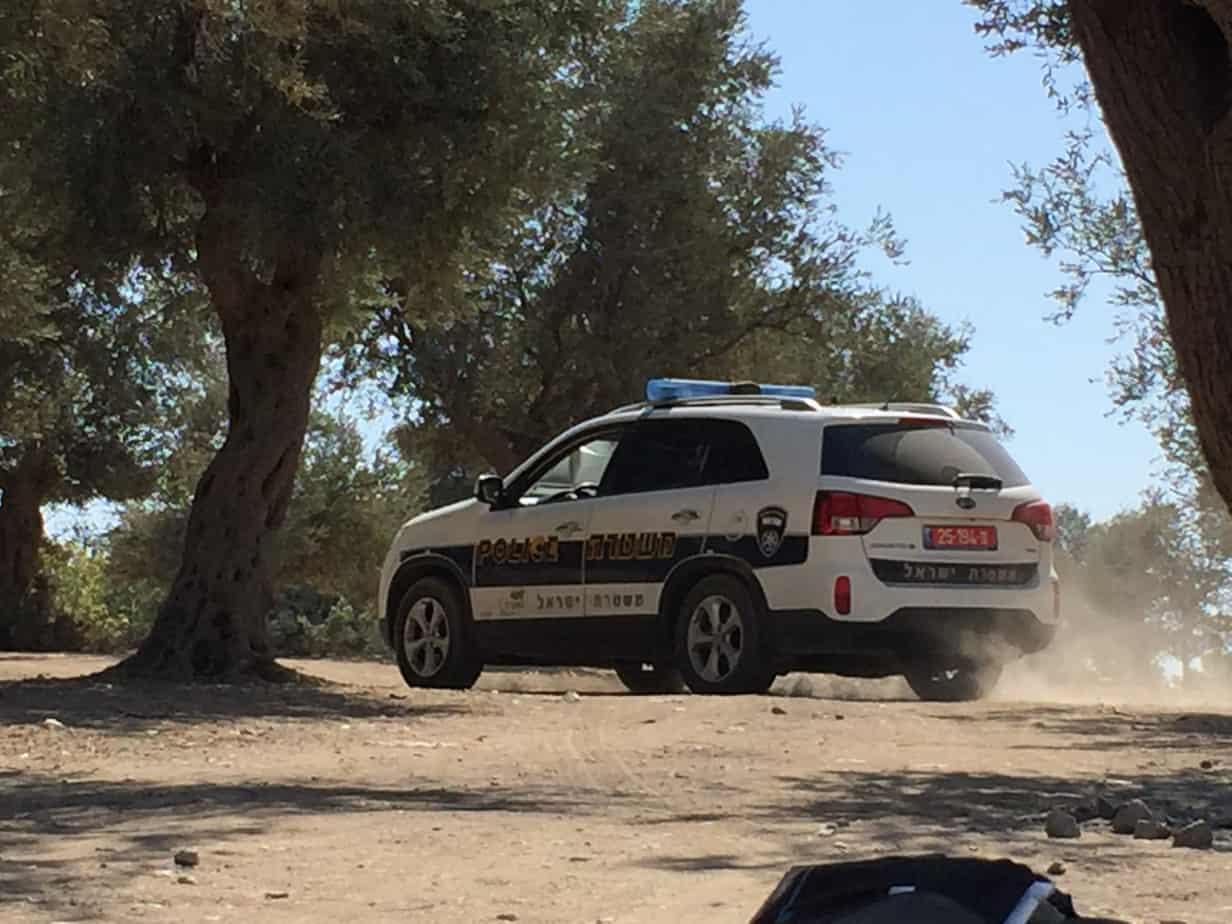 Before bed a guy called Steve came to speak with us as I tried to settle my hungry stomache unsuccessfully with hot stock water (our food supplies were running low). He lived nearby and had been trekking with his grandchildren for the day. I instantly recognised his English accent. He grew up in London, except when he was an evacuee in the war and was sent safely away from the bombings to live in Basingstoke – my home town! What a small world. Steve kindly offered us help with anything we needed. I had never met an evacuee before.

It was really nice speaking with someone from home but it also enhanced a feeling I had which, until now, I couldn’t put a finger on. I was feeling isolated. The trail so far has been really lonely and we’ve only met a few hikers, something which I hope will change when the weather starts to cool, but it’s more than that.

When Israelis find out I’m foreign usually the first thing they ask me is am I Jewish. I’m not. My only connection to Israel is that I fell in love and married one of your own. Israel is a new country that is still establishing itself but  has strong religious based communities, none of which I am part of. This is one of the reasons I can sometimes feel out of place here.

The other is the differences in cultures. I never would have considered myself a prude person until I came to Israel where my British politeness and reserved nature shows itself on a whole different level. Sometimes I struggle to understand the brash forward nature of Israelis that is so different to what I am used to. My natural reaction is to feel shy. Part of my motivation to walk in Israel was to build on, and find my own way, of connecting with the country (separate from my husband), but I knew this journey wouldn’t always be easy.

I had the worst night’s sleep ever. 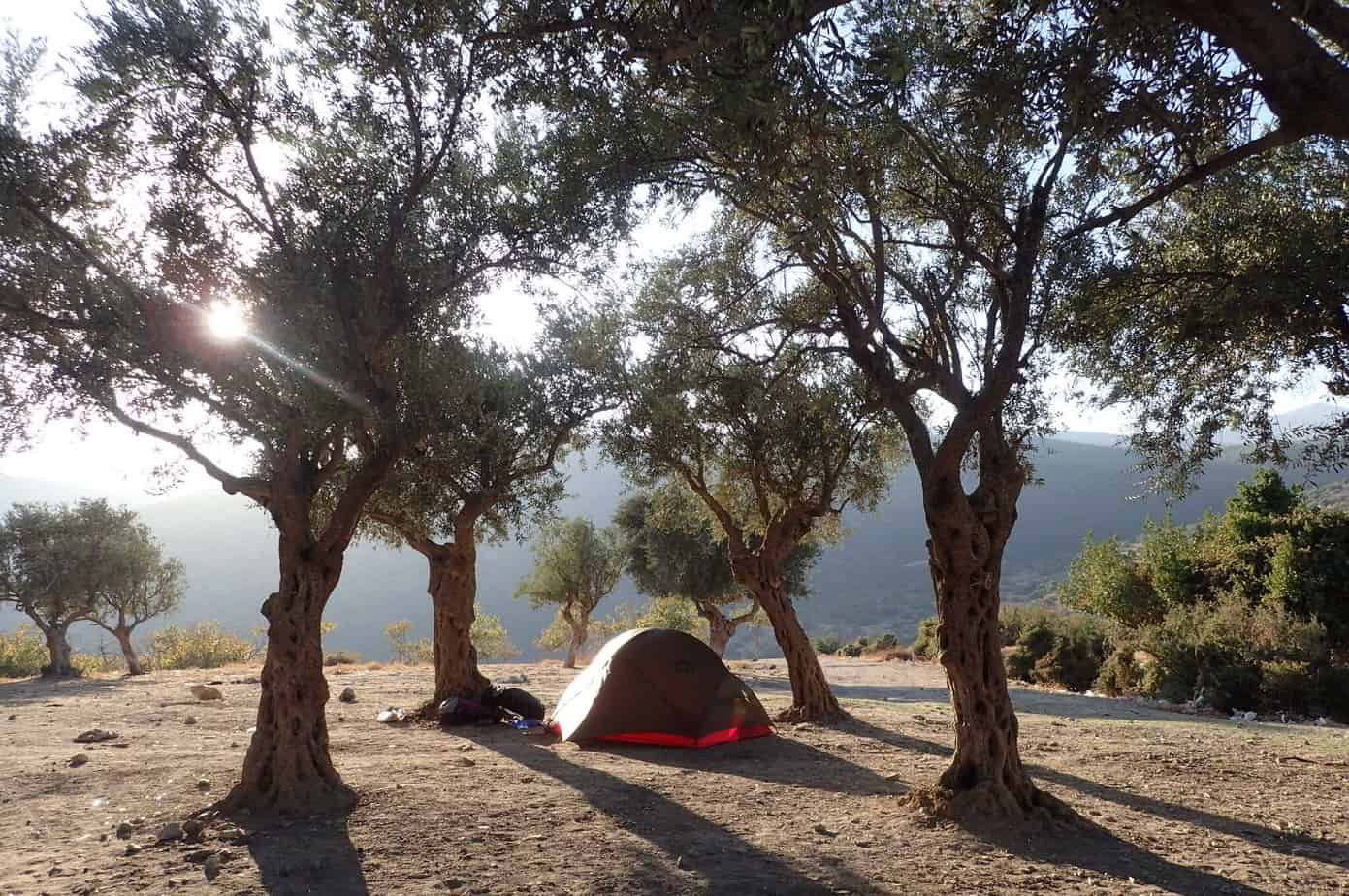 Every half an hour, throughout the night, a group of people would pass us, heading to the natural spring. They were so noisy, 1 group even left their music playing loud in their car. They could see our tent and that we were sleeping. 2 guys had a noisy conversation a few metres from us. Hadn’t they heard of whispering? Couldn’t they move somewhere else with all the thousands of acres of empty space around us? I couldn’t see it as anything other than rudeness.

At 4.30am I gave up on sleep and asked Gil if we could leave. I packed down the tent trying to ignore all the rubbish around me. Littering really winds me up and I had seen a horrible amount so far on this walk. I cannot understand the mentality of effectively crapping on your own yard.

I was exhausted and so tired. We set off just as another guy turned up to use the spring. He was religious, stripped naked (I didn’t look I promise!) and jumped in and out of the pool while praying. Apparently the freezing cold mountain water is holy. Rather him than me but at least he was being quiet.

The trek down the steepness seemed much longer than I remembered. The track then carried on through the reserve over difficult terrain, very uneven, steep and rocky with some scrambling sections. It should have been fun but I just wasn’t in the mood today. I was frustrated and wanted to do anything but walk. I just couldn’t be bothered anymore.

Time seemed to go slowly and even looking at the lush beauty of the reserve couldn’t lift my spirits. 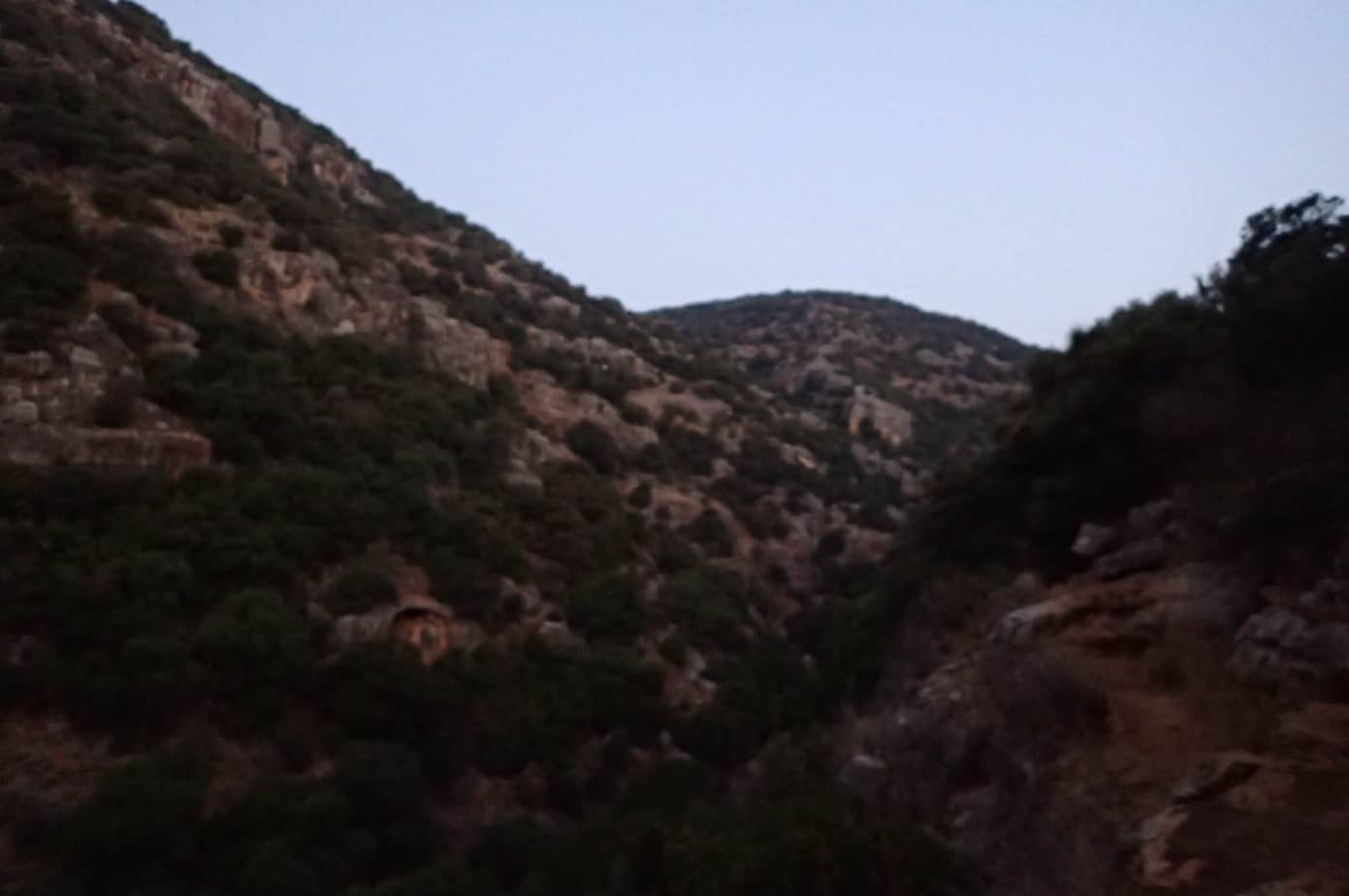 We crossed a main road, through a tunnel, and joined a track that turned from muddy and grotty to pretty spectacular. There were huge mountains on either side full of caves and, as we neared the exit, an impossibly huge pinnacle sat towering above us.

But still, my bad mood just would not shift. 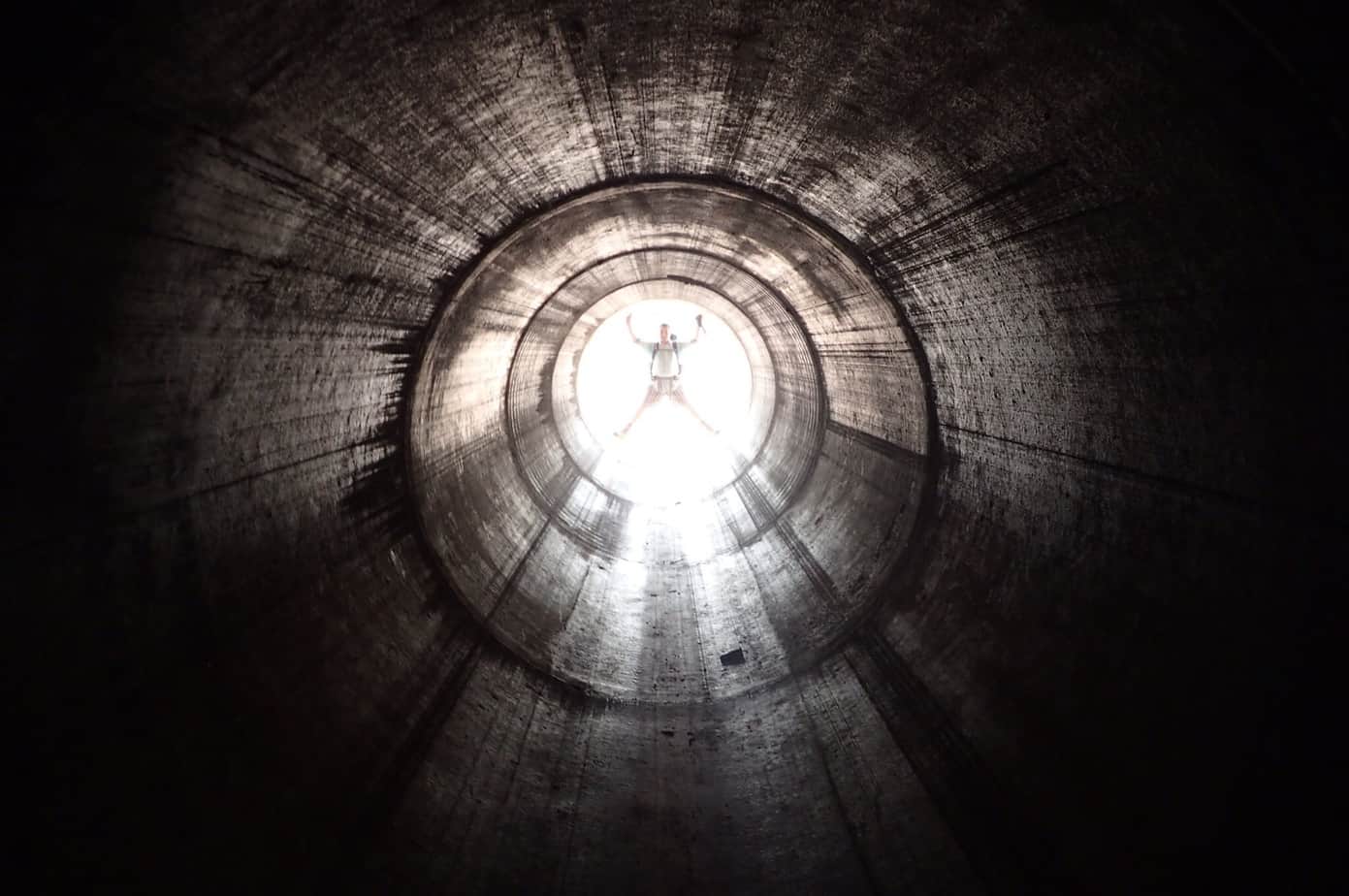 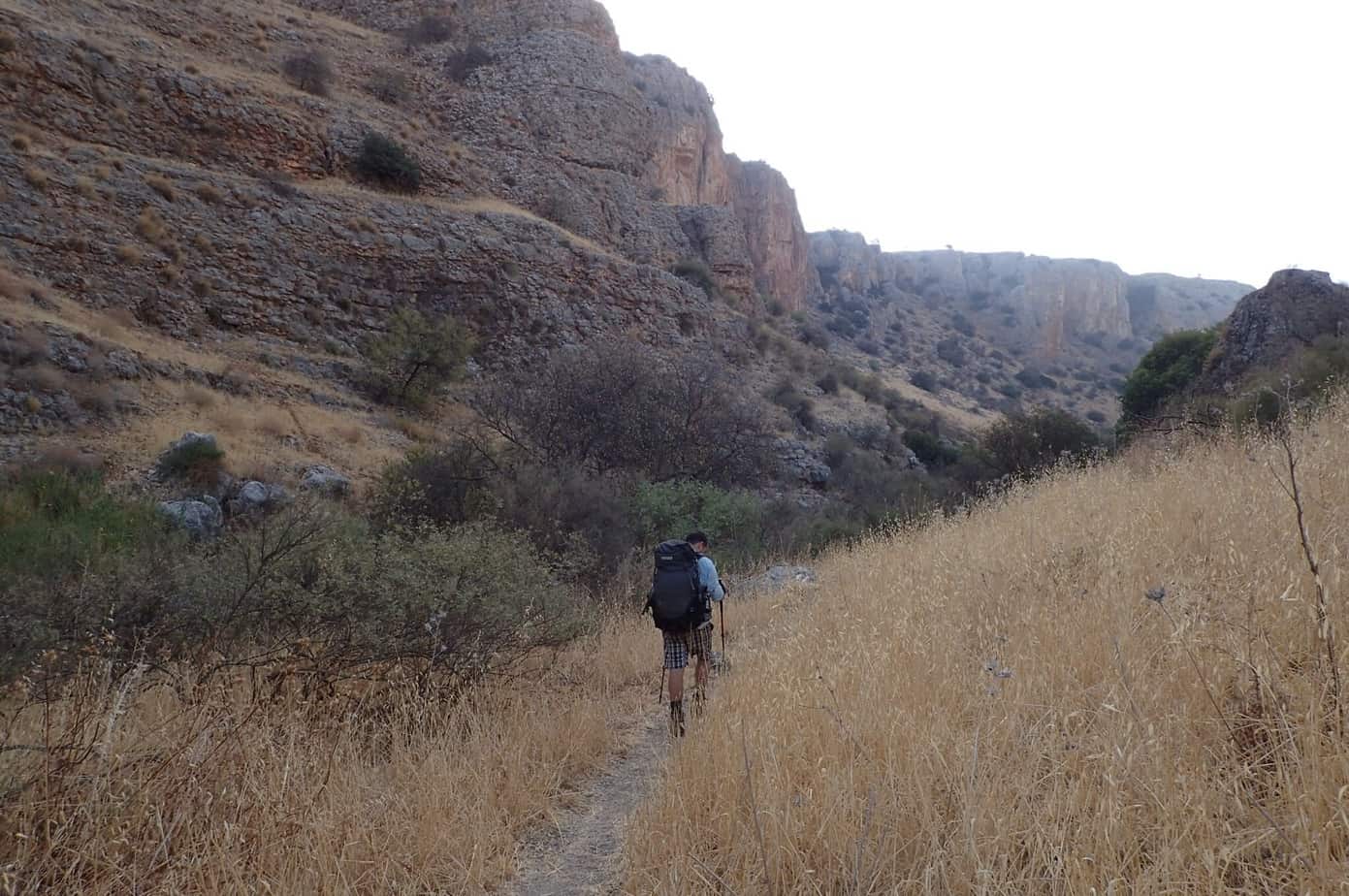 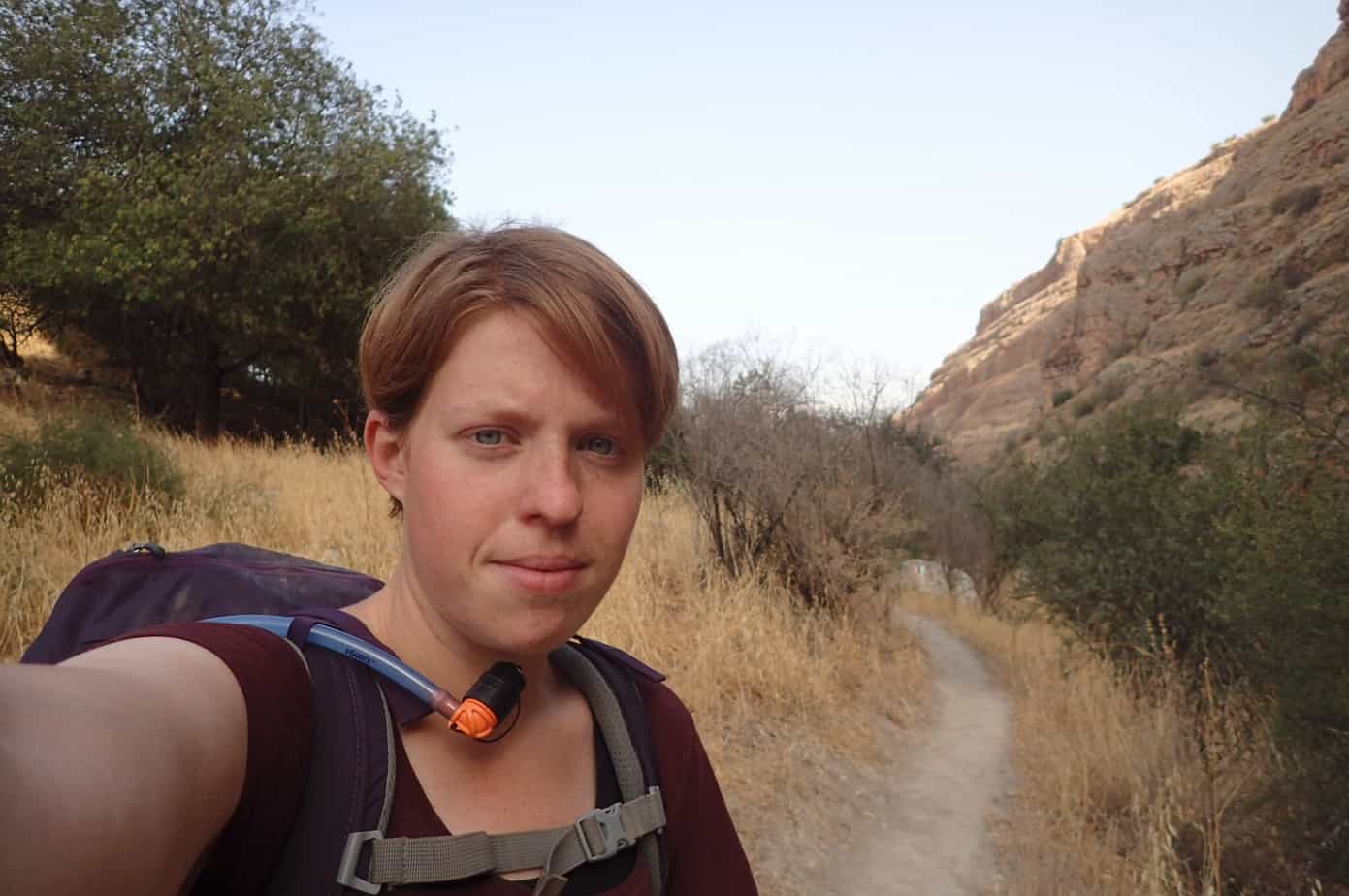 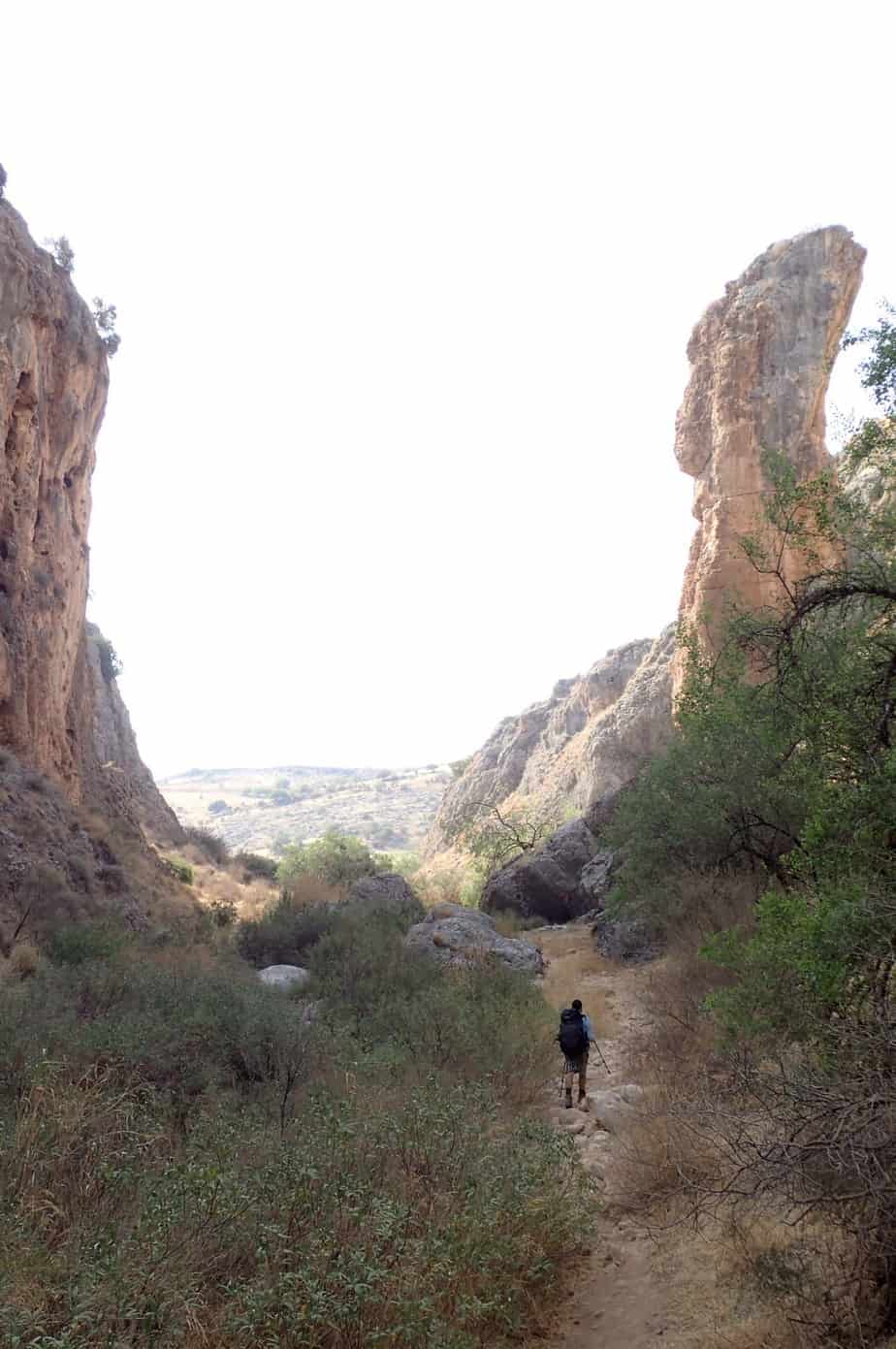 We continued on through huge farms and tracks that seemed to go forever until we hit a small residential area and a falafel restaurant and corner shop where we stopped for food. 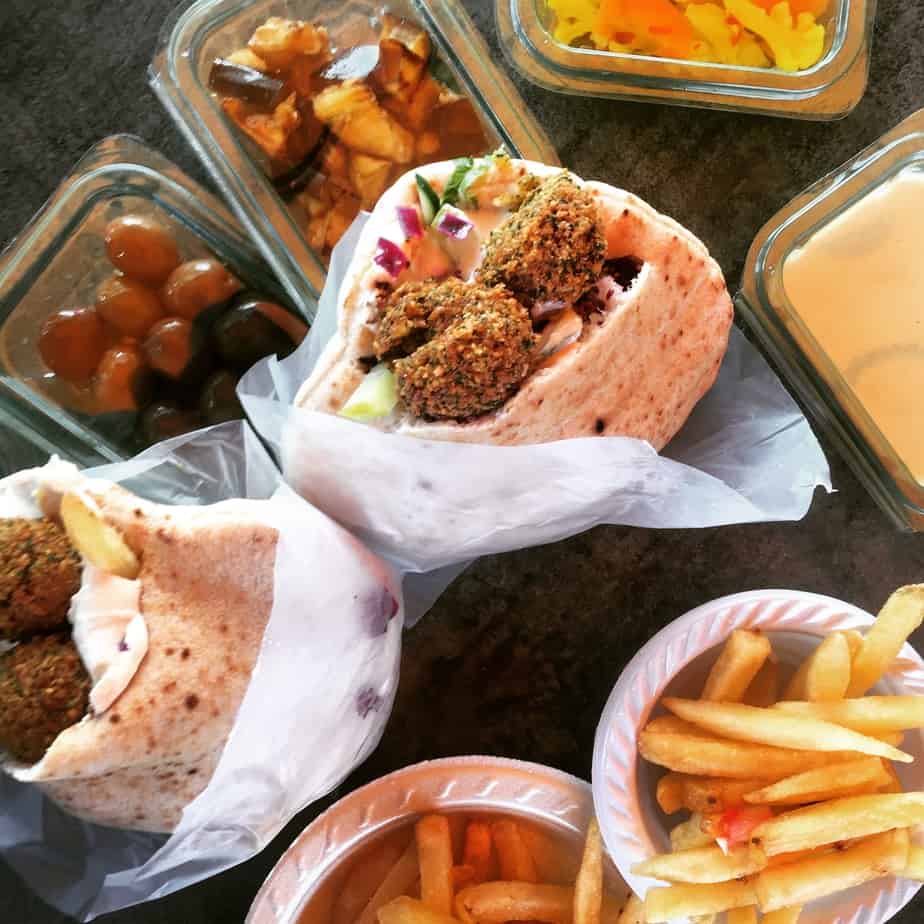 When we arrived the shop workers (all middle aged men) were all screaming at each other, yelling like stroppy teenagers but really aggressively. They didn’t bother stopping when I entered. Gil told me they were arguing because one of them had taken their break to early. I had never seen fully grown men act like that before. When they stopped shouting one of them came to clean our table and slammed the ash tray down in a strop, later he shoved past me while I was looking in the shop and told Gil to put things back if he wasn’t going to buy them – he was so rude. His behaviour was intimidating and taking his anger out on the customers…it’s just not ok.

I tried to relax as we sat stocking up with food but today was insanely hot. Even in the shade sat doing nothing I was sweating, I literally felt the energy draining from me. 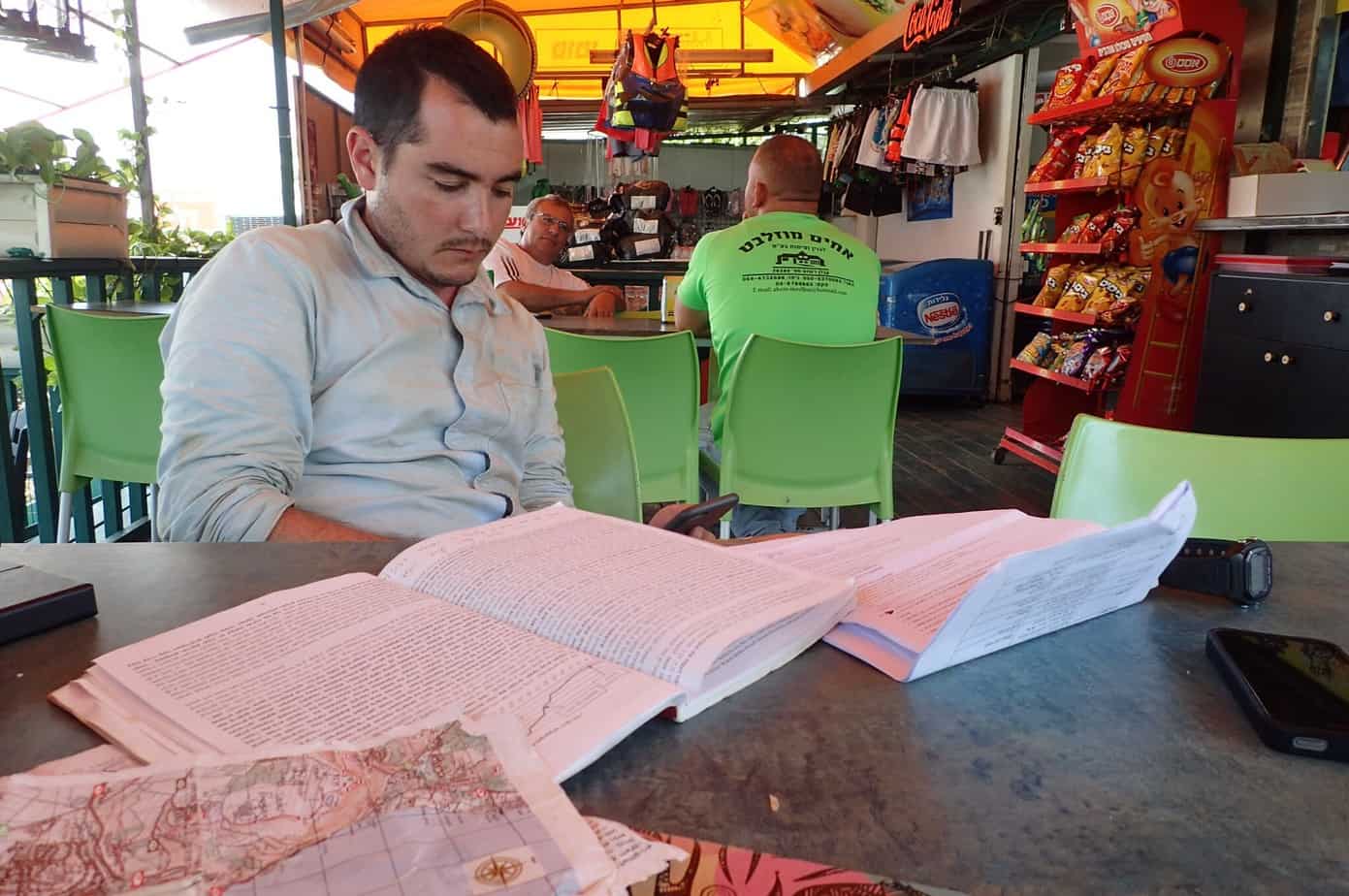 We had planned to reach the top of cliff Arbel, a gruelling 600 metre climb. I didn’t think I could physically do it but I wanted to be away from this place and the people so I set off focusing on putting 1 foot in front of the other.

A woman yelled at us crossing the road. She slowed down to let us pass and then shouted because we were going too slow (there was a car coming the other way!). Just ignore it, I told myself .

We passed a farm where a sweet horse decided to follow us for about 5 minutes. I was turning to take a picture when suddenly 2 dogs came at us from no where. One of them, who looked like he had Rottweiler in him came dangerously close, barking, his teeth snarled back, his heckles up. I love dogs and understand their behaviour and was sure this one would bite us. He was big enough that he could have ripped us to pieces. I was petrified. I yelled at Gil to turn his back (a submissive move to try and diffuse an aggressive dog) and we rushed away, I was ready to stab him with my stick. He backed off and it was then that I saw his owner casually sat by the side doing nothing!! Unbelievable! Gil yelled at the man and he just waved at us in a dismissive manner. 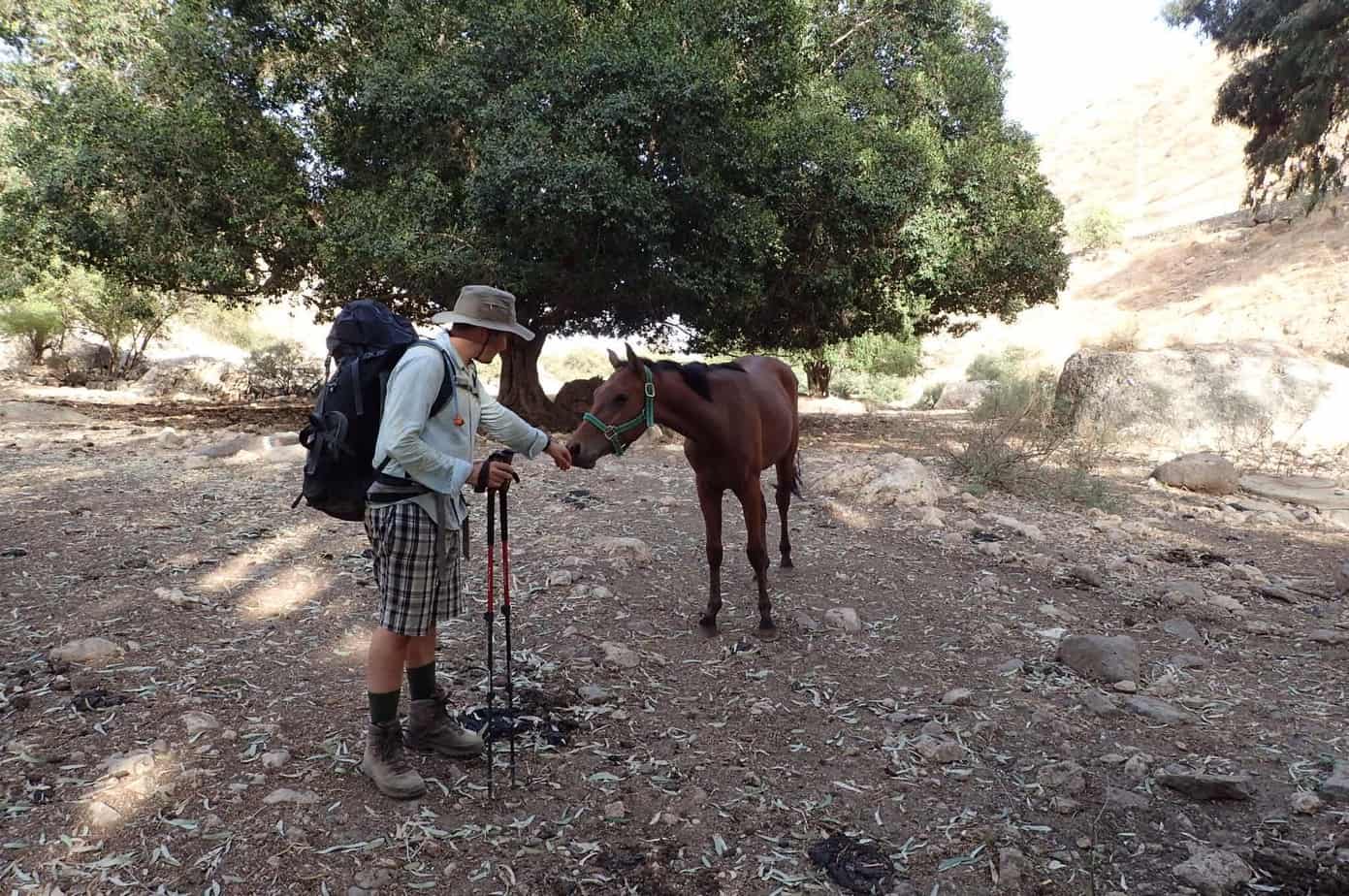 My heart was still racing as we started the ascent, probably the reason why we both missed the turning and hiked a 50metre section up only to have to go back and correct ourselves – this was turning out to be the worst day.

One foot in front of the other. That’s all I focused on. 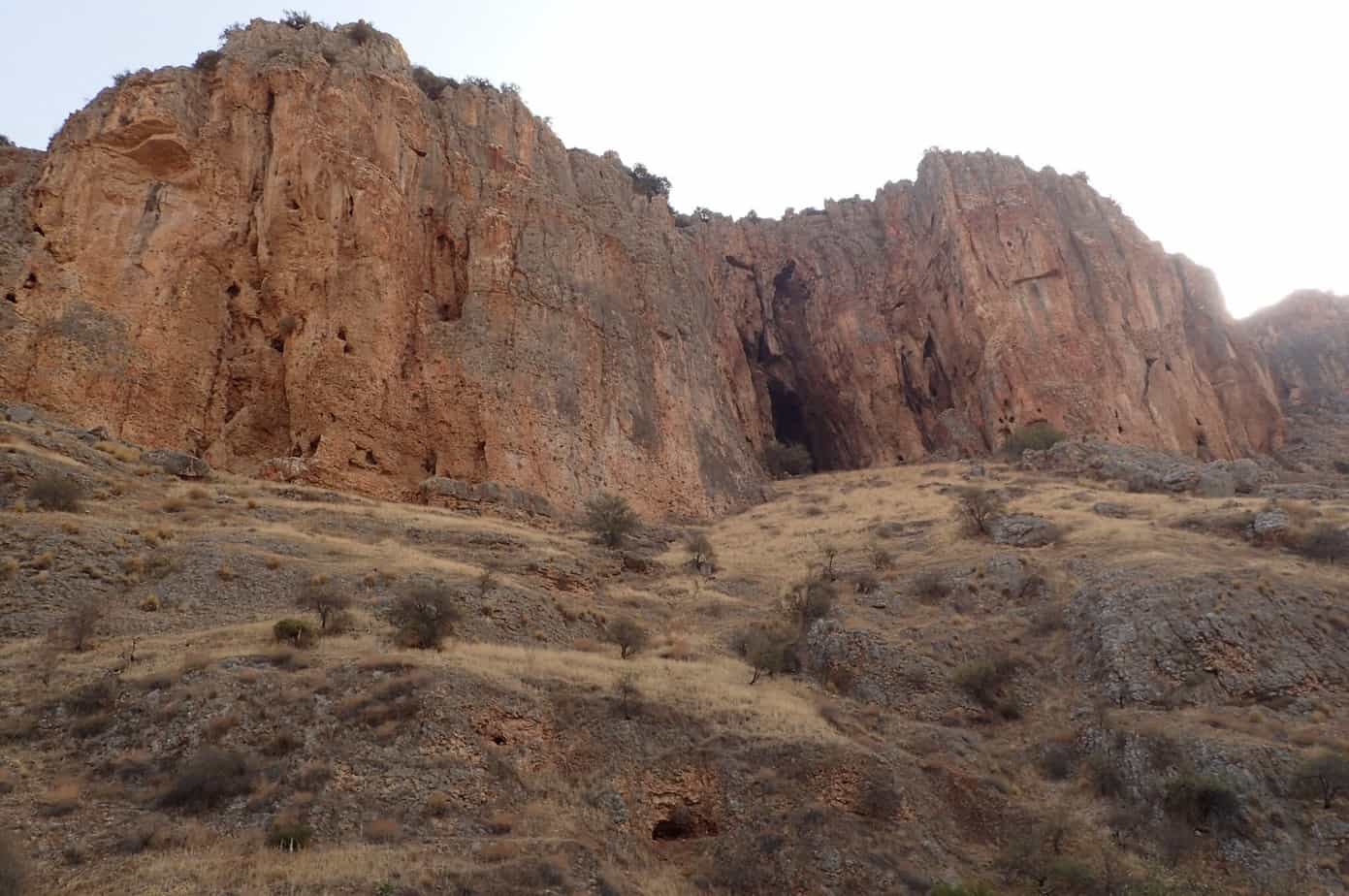 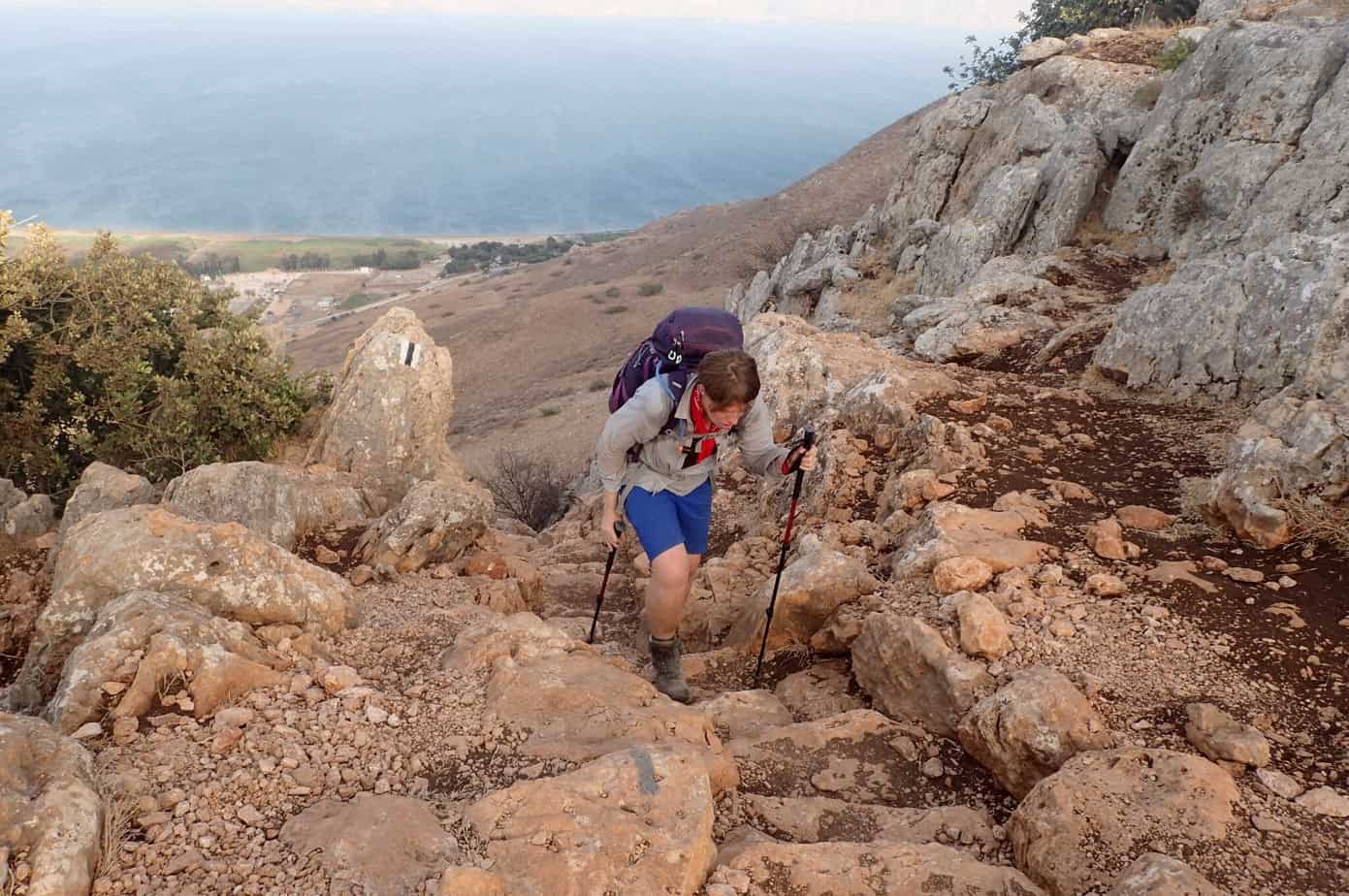 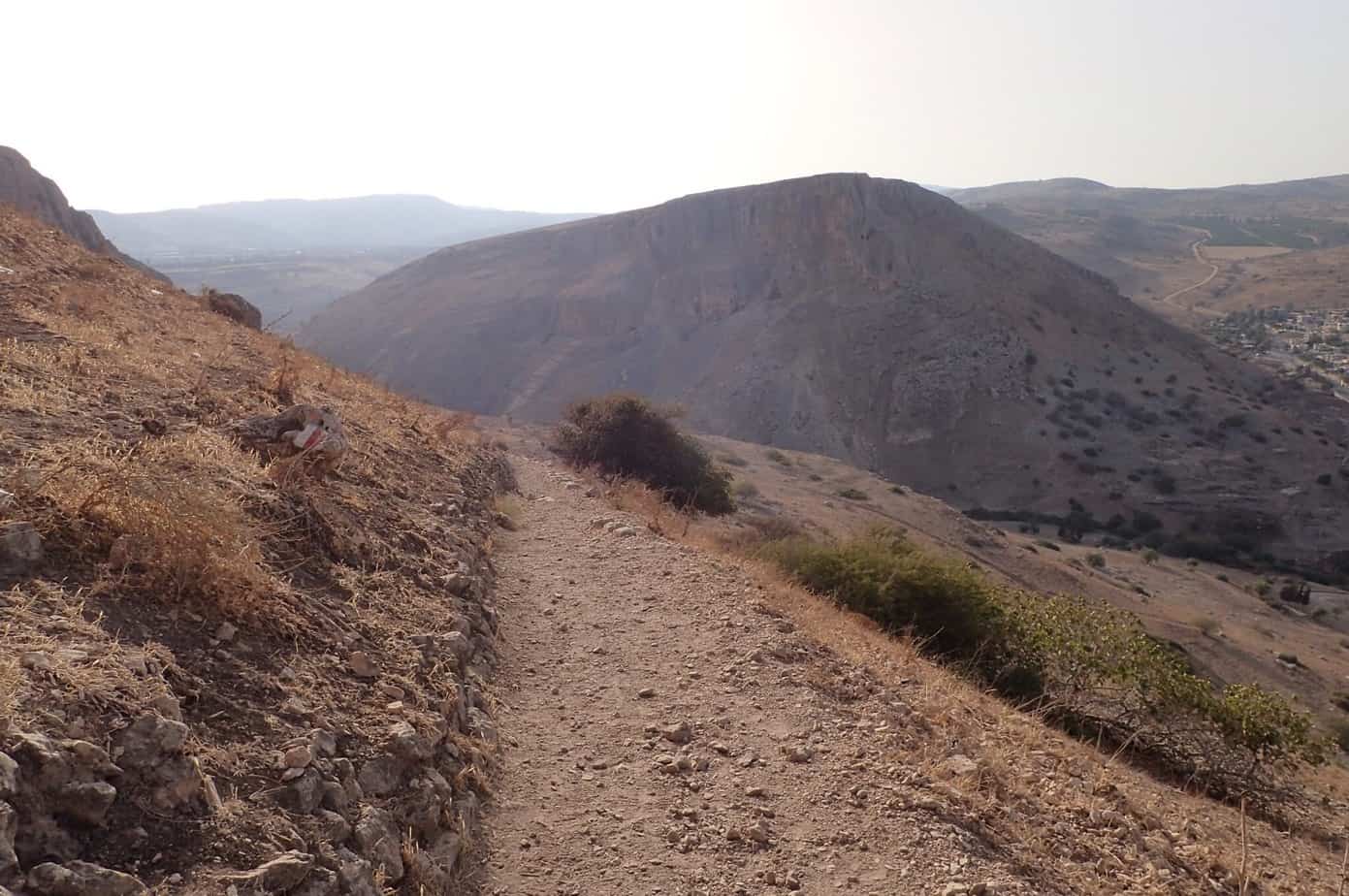 It was only when I reached the cliff face that I actually looked up. It was stunning….the Sea of Galilee.

I hadn’t realised how high we had got. We were almost there. I absorbed some energy from the water below and started scrambling up the cliff. I like grade 1 scrambling and this was perfect, a climb made easy with occasional hand rails that meant it wasn’t too much work with our ache bodies and heavy packs. It was nice to use different muscles.

I realised half way up that we had reached the 100km mark. The furthest I had ever walked. 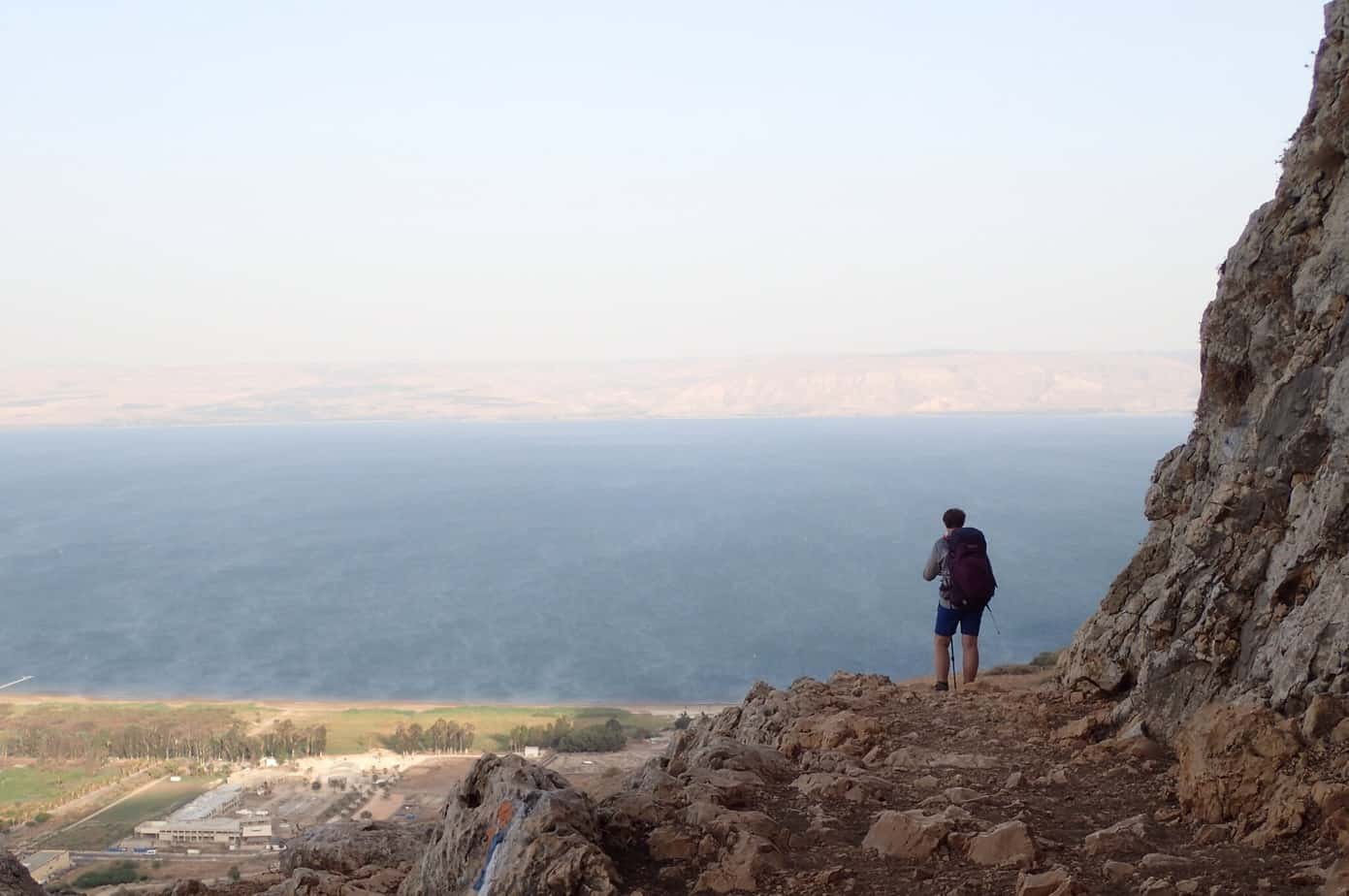 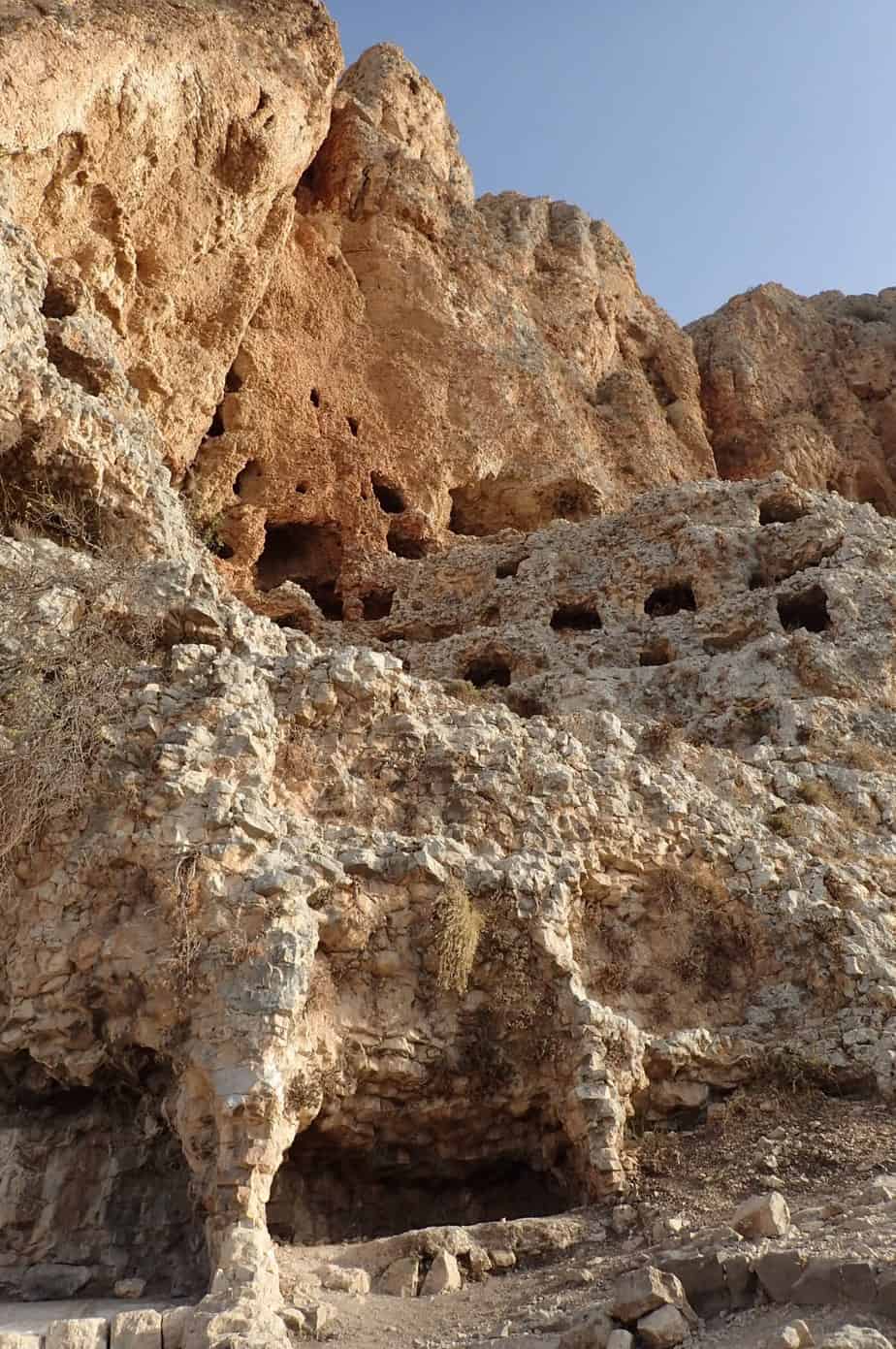 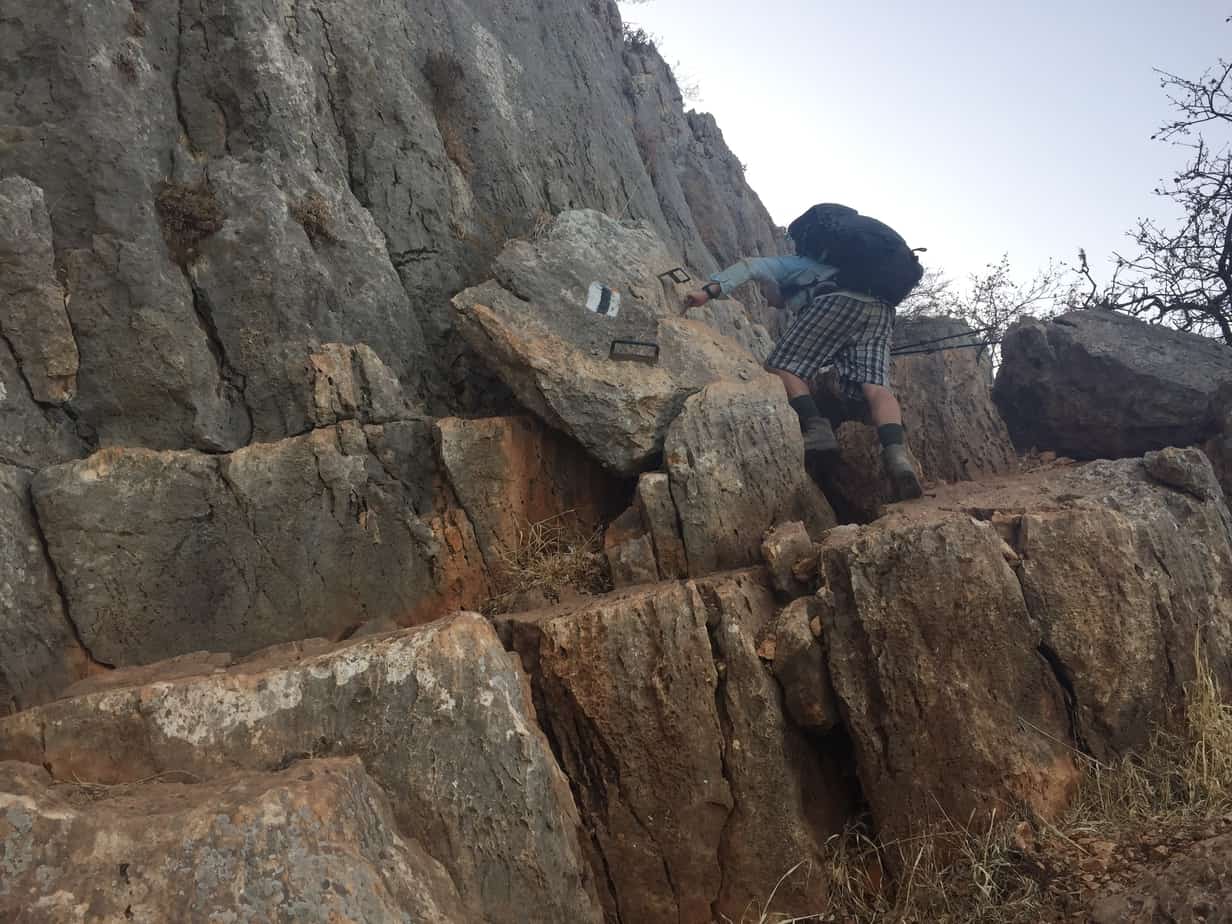 When we got to the top the view point was too perfect not to camp, with a flat dug out section shielding us from the wind. I wanted to hold on to this view for as long as I could. We put up the tent and I changed out of my sweaty clothes. We ate pitta bread with sweet corn for dinner and I stretched. I felt like a different person. 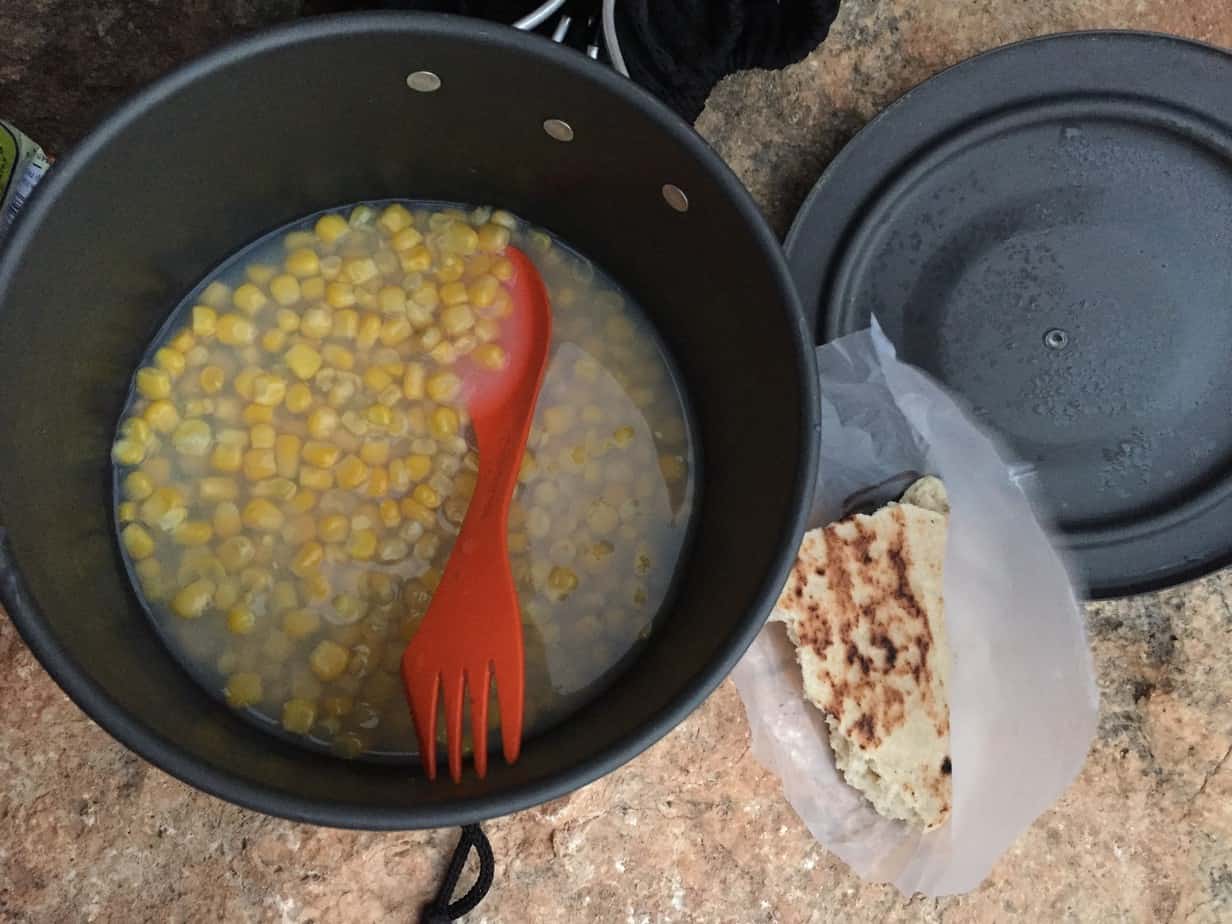 It hadn’t been an easy day but tiredness is your worst enemy. Sure, I sometimes clash with the Israeli mentality but there was no doubt that some of the people today were just rude, regardless of culture. My negative outlook was only looking at the bad today. We’ve received about 20 emails in the last 24 hours from people offering us food and accommodation as they have heard about our walk through Israel and would like to help. No one has asked for anything in return.

Everybody we meet stops to talk and offers us something to eat, even if they barely have anything themselves. This kind of generosity is second to none. This is a nation of warm, good people and I reminded myself how much my mood can effect what I choose to see. 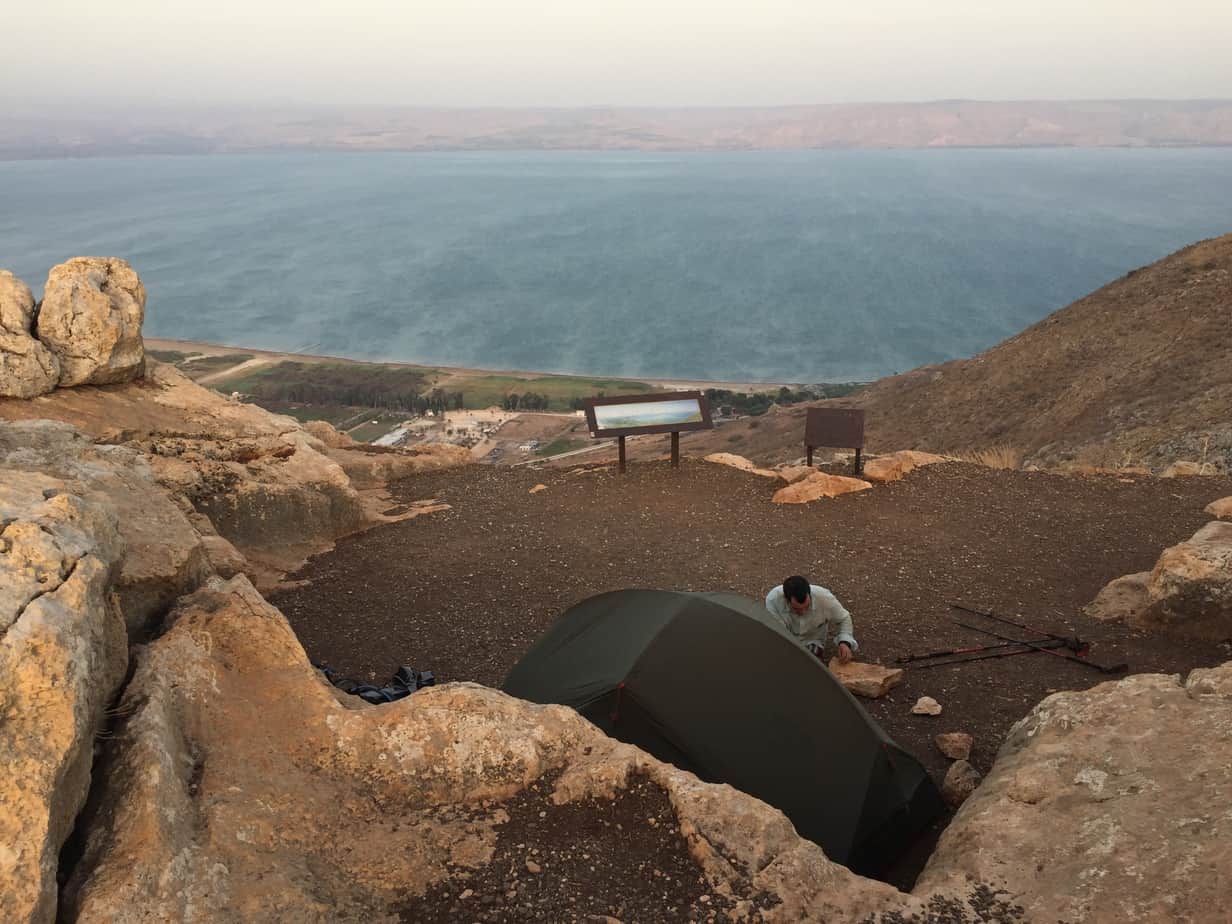