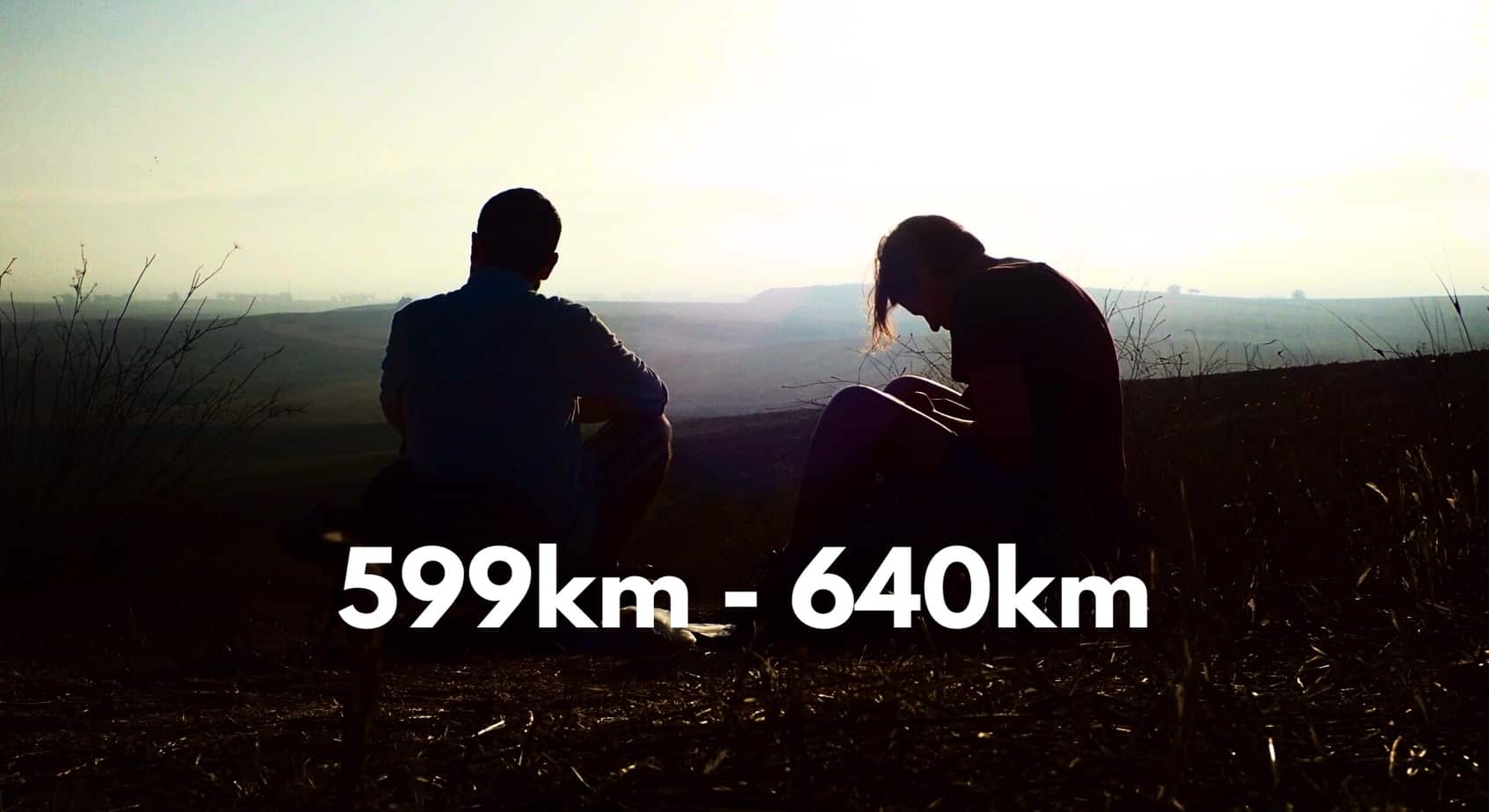 As soon as we left Arad, we were hit with a vast desert with mountains as far as the eye could see. Stunning! The day started with a climb, about 250metres. My pack felt so heavy. We don’t pass shops, gas stations or anything for 6 days now which means I have almost a weeks worth of food in my bag. No matter how I adjusted it, I just couldn’t get it to sit right on my back. 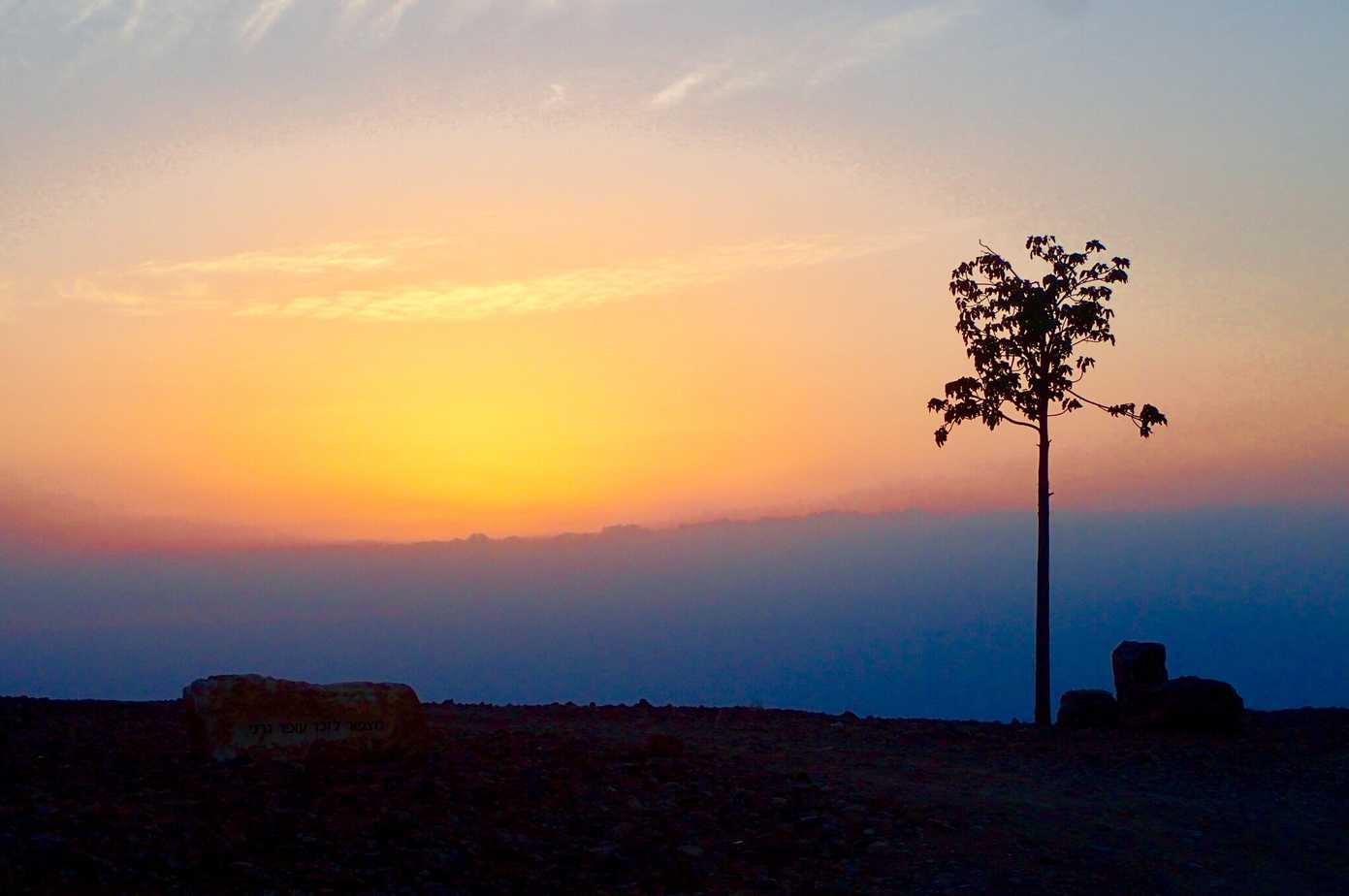 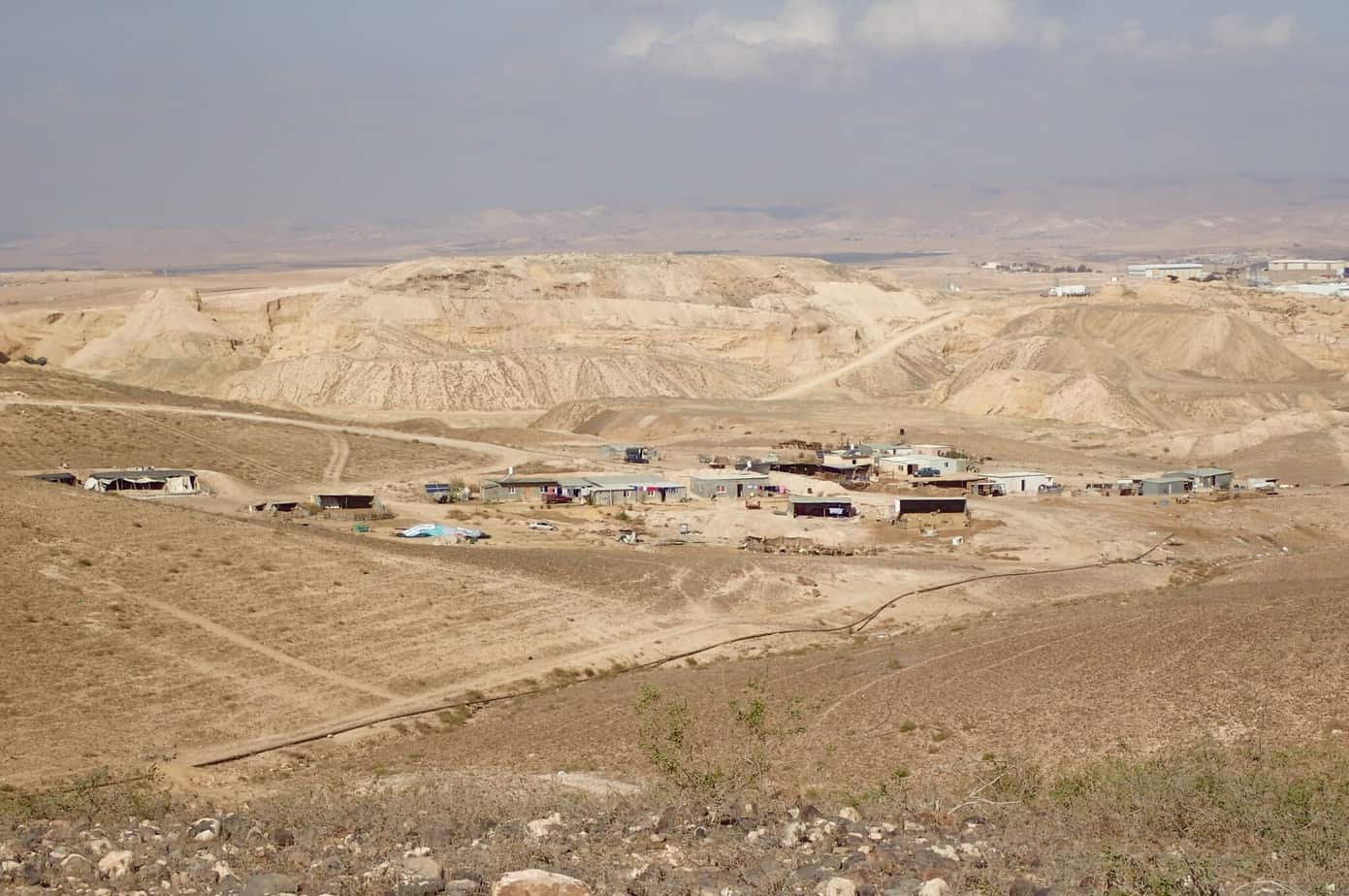 After reaching the peak of Mount Kina, we dropped down the other side, past some small Bedouin settlements and a few feeding camels. We managed to get a bit lost as the featureless land was crisis-crossed by too many confusing make shift dirt roads. Back on track and it was then a steep and rocky descent into the valley. The trail followed the dry river bed now for the rest of the day. 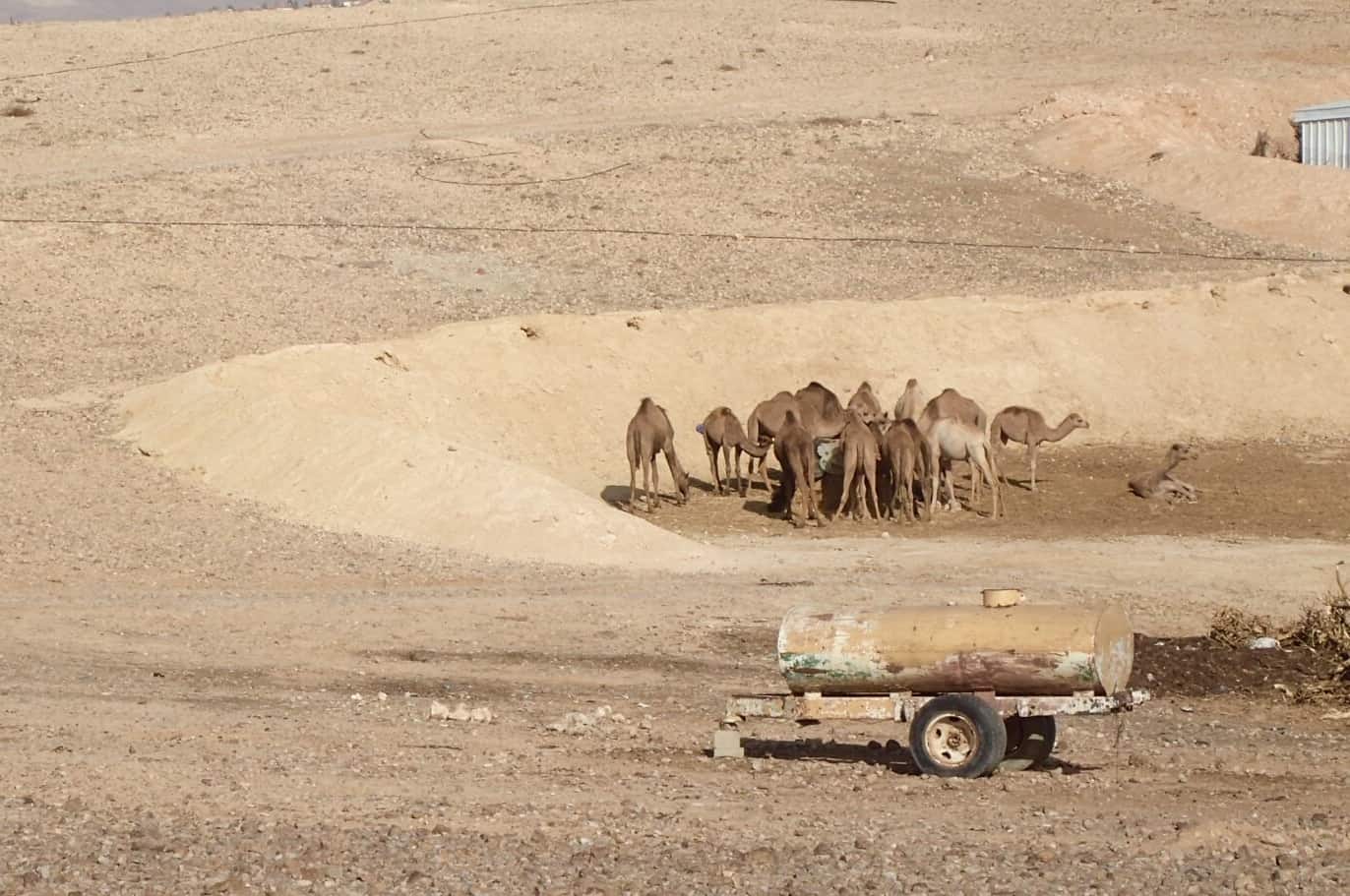 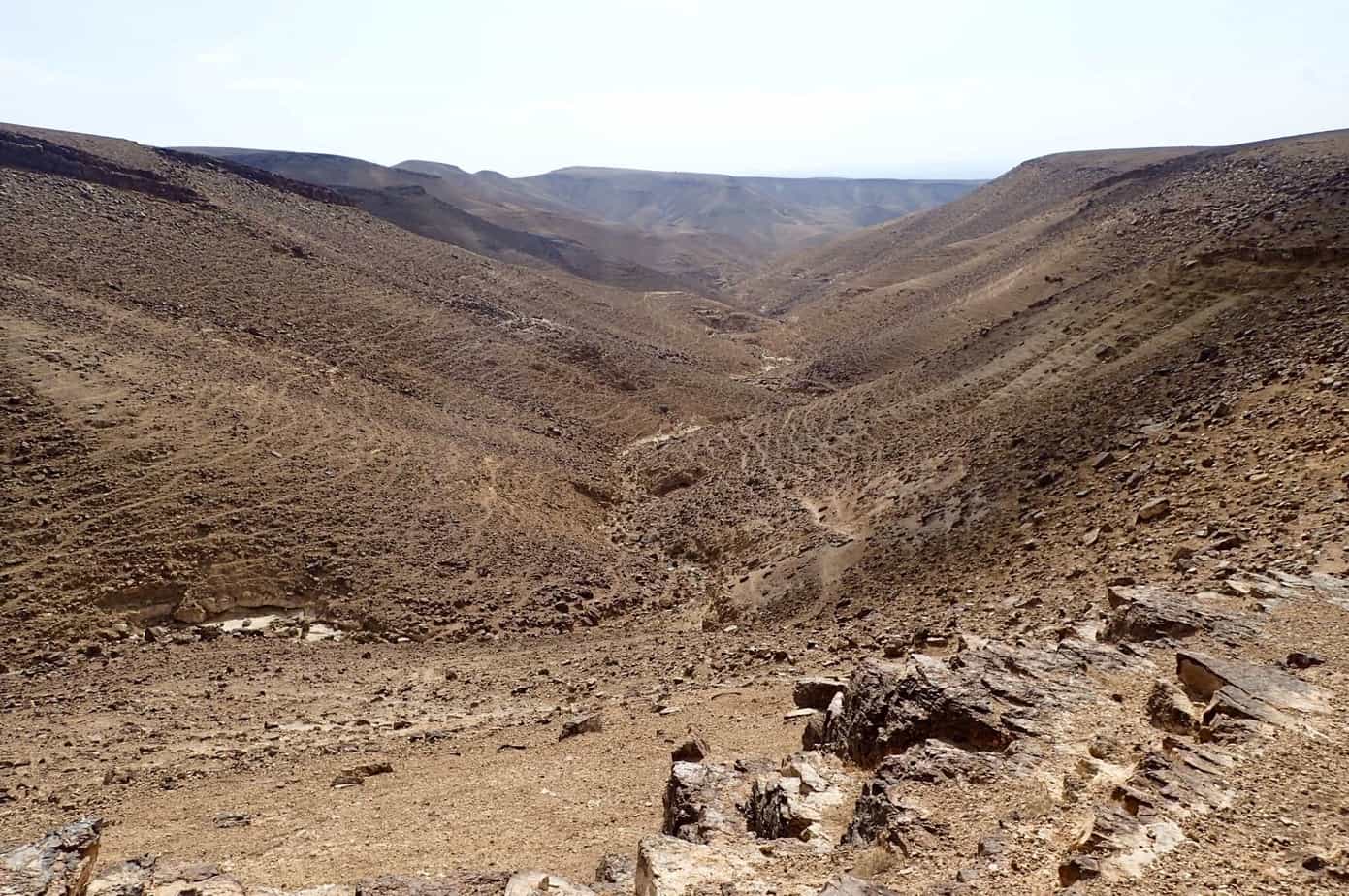 The rock formations were amazing and, for some sections, the walls closed in and we had to remove our packs as there were steep climbs down. This was fun the first couple of times but then got a bit tedious as getting the heavy pack on and off required a huge amount of effort. 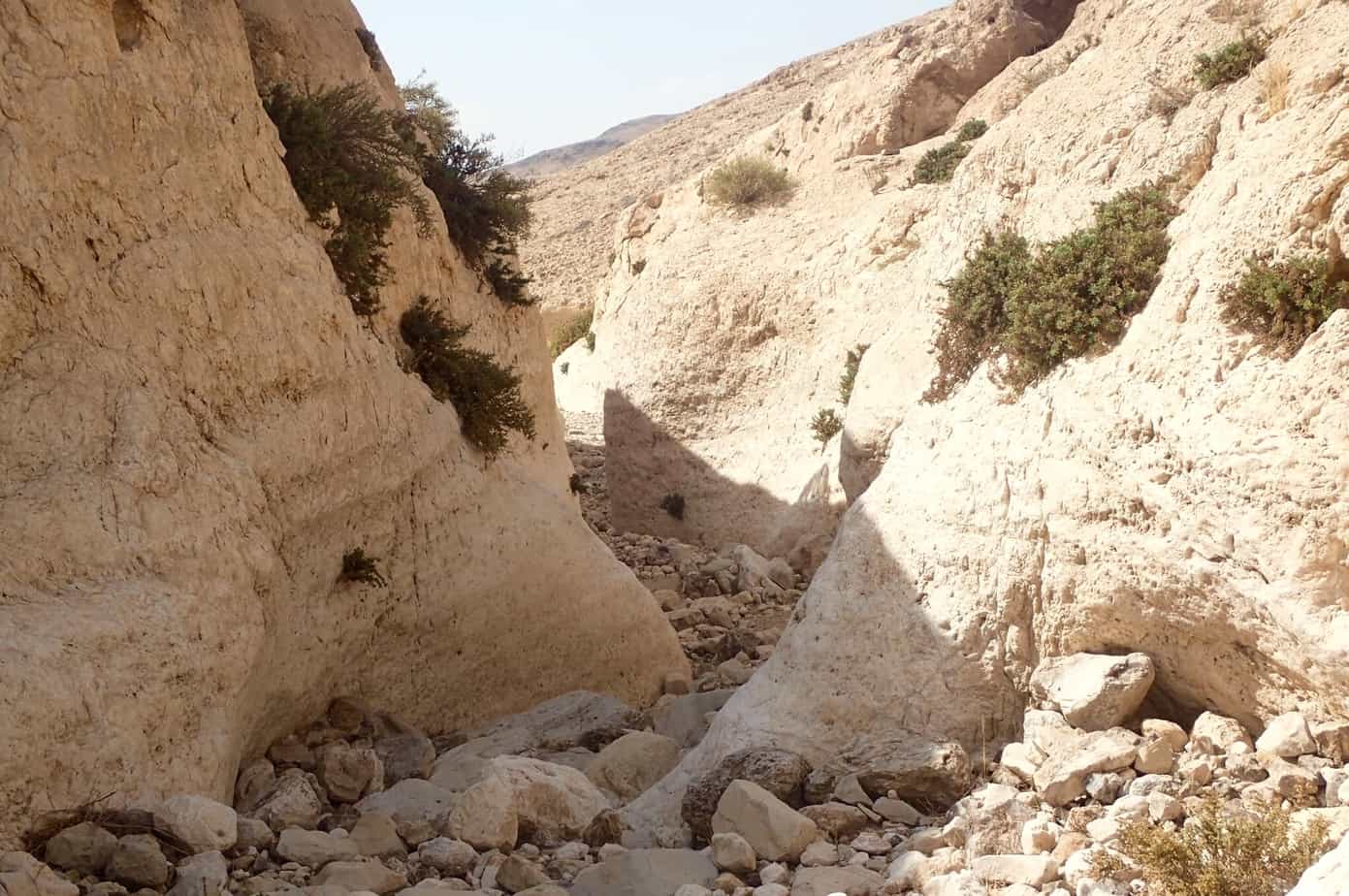 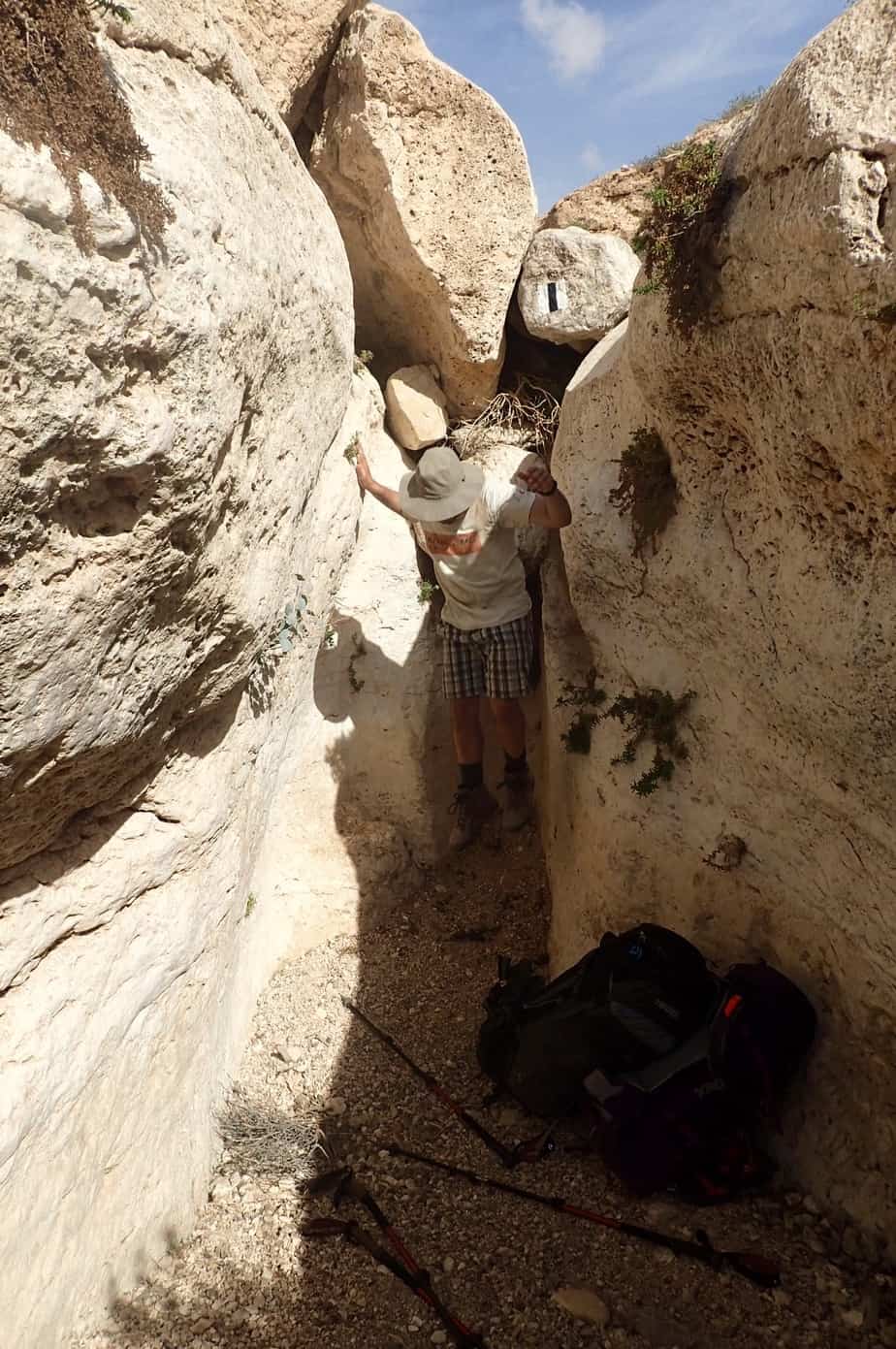 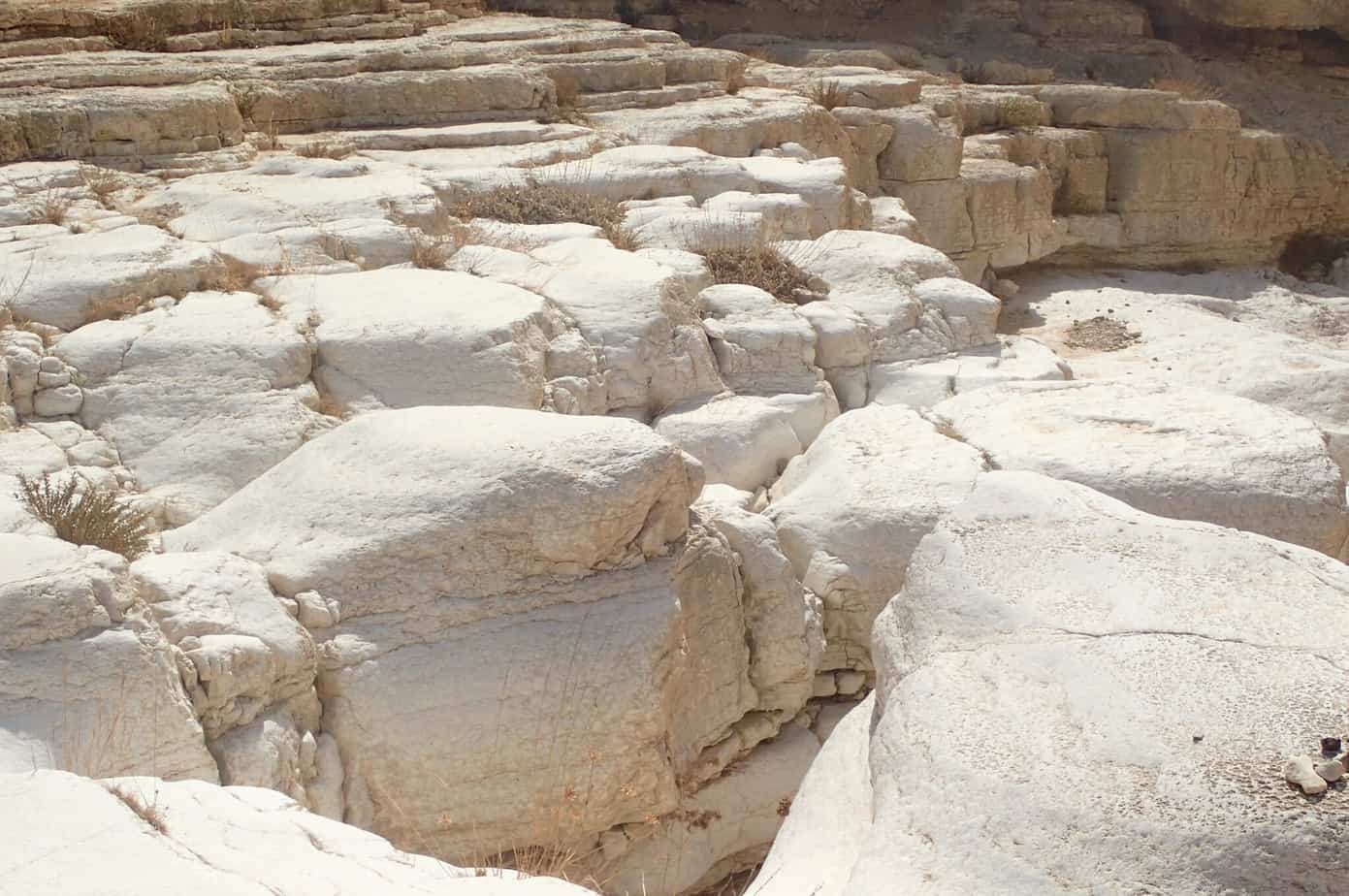 We continued on through the Gibson Pass, named after a hiker who had a serious fall here, cutting his arm badly, when he fell on a slippery rock. It’s always good to remember there is an element of danger in everything we are doing. 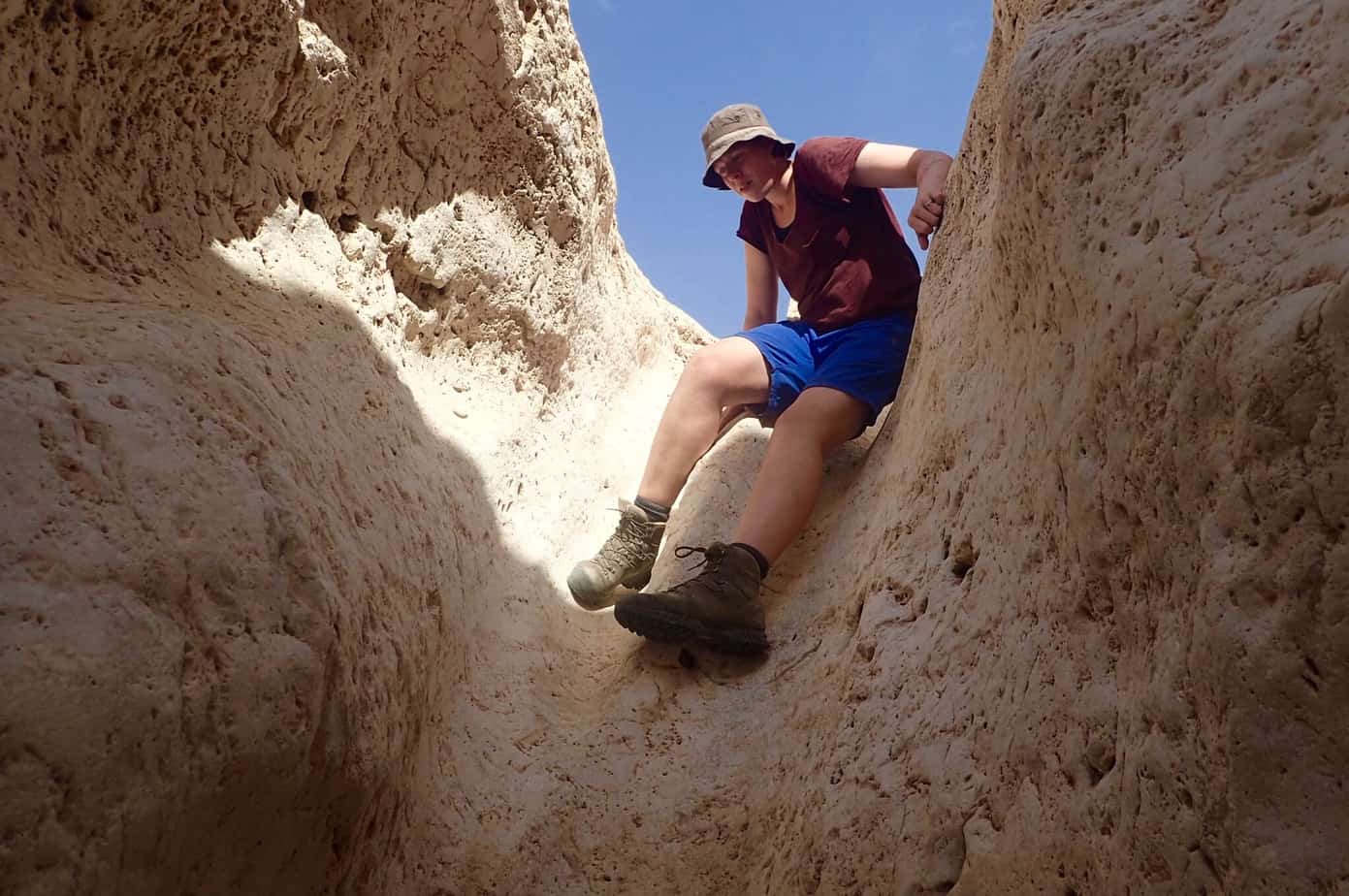 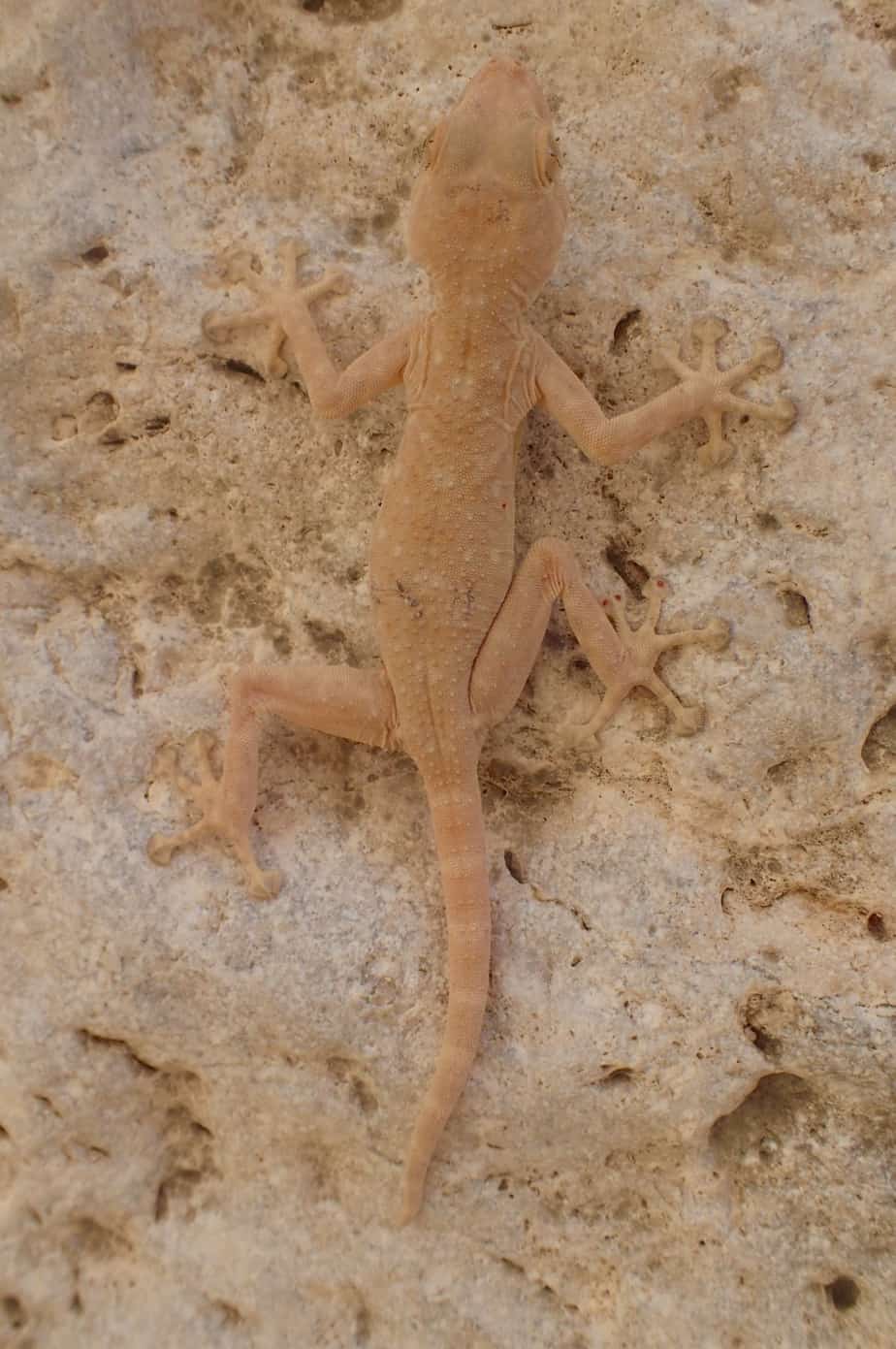 The valley then opened up and the large rocks beneath our feet slowly turned to gravel. I’ve decided I hate desert flies. They are like normal flies but bigger, persistent and more annoying. They were driving me mad all day and I was swatting like a lunatic. Gil has a theory that it is because there isn’t much in the desert so they get over excited when they see a human. 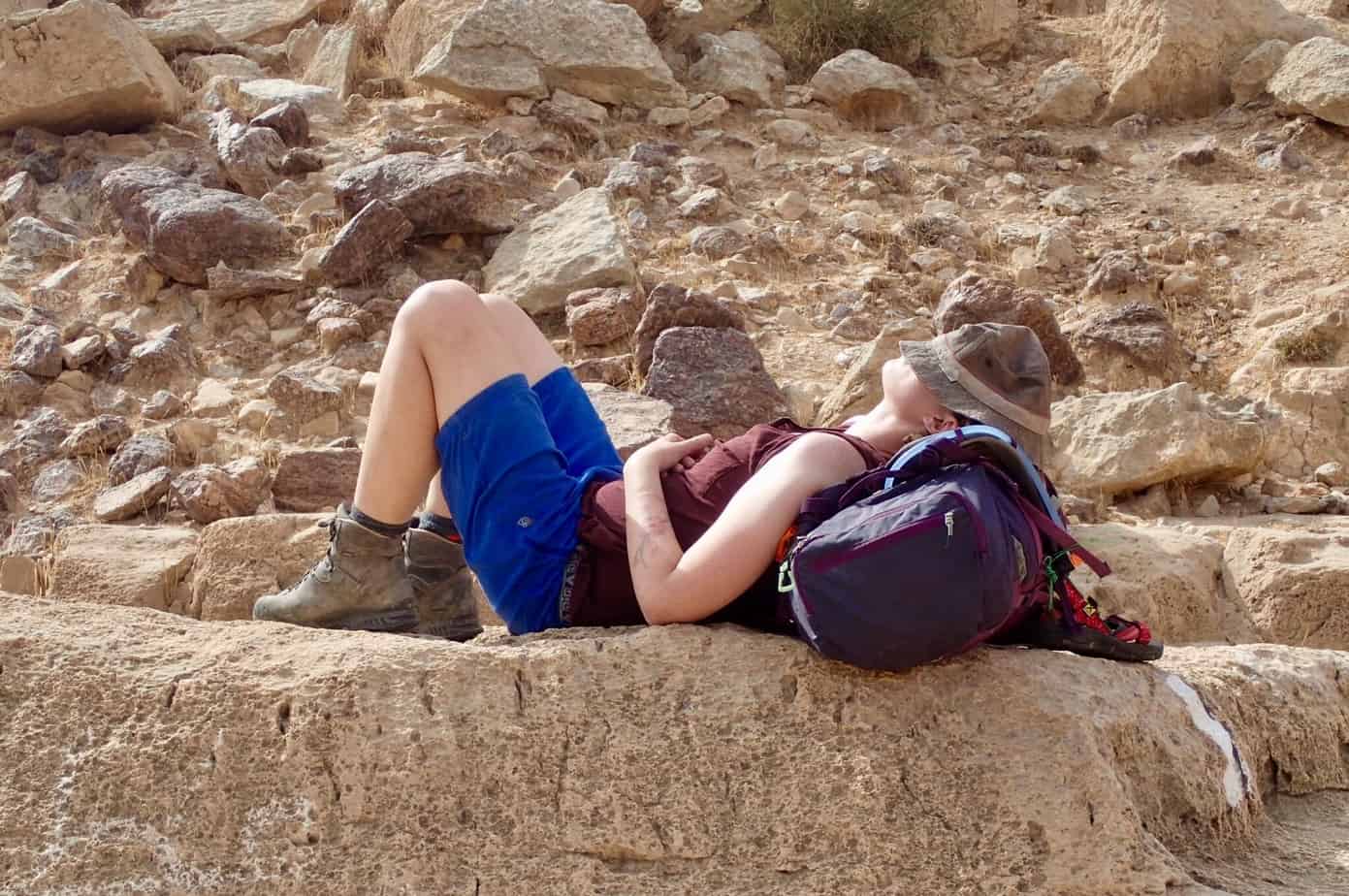 3 young Bedouin boys passed us on donkeys. Most of the bedouins we pass wave and smile but are usually very quiet, like these 3. Gil asked if he could have a go on their donkey which they found hilarious, especially when he over swung getting up and fell off the other side. We gave them the last of our sweets and they rode off bickering who should get what. 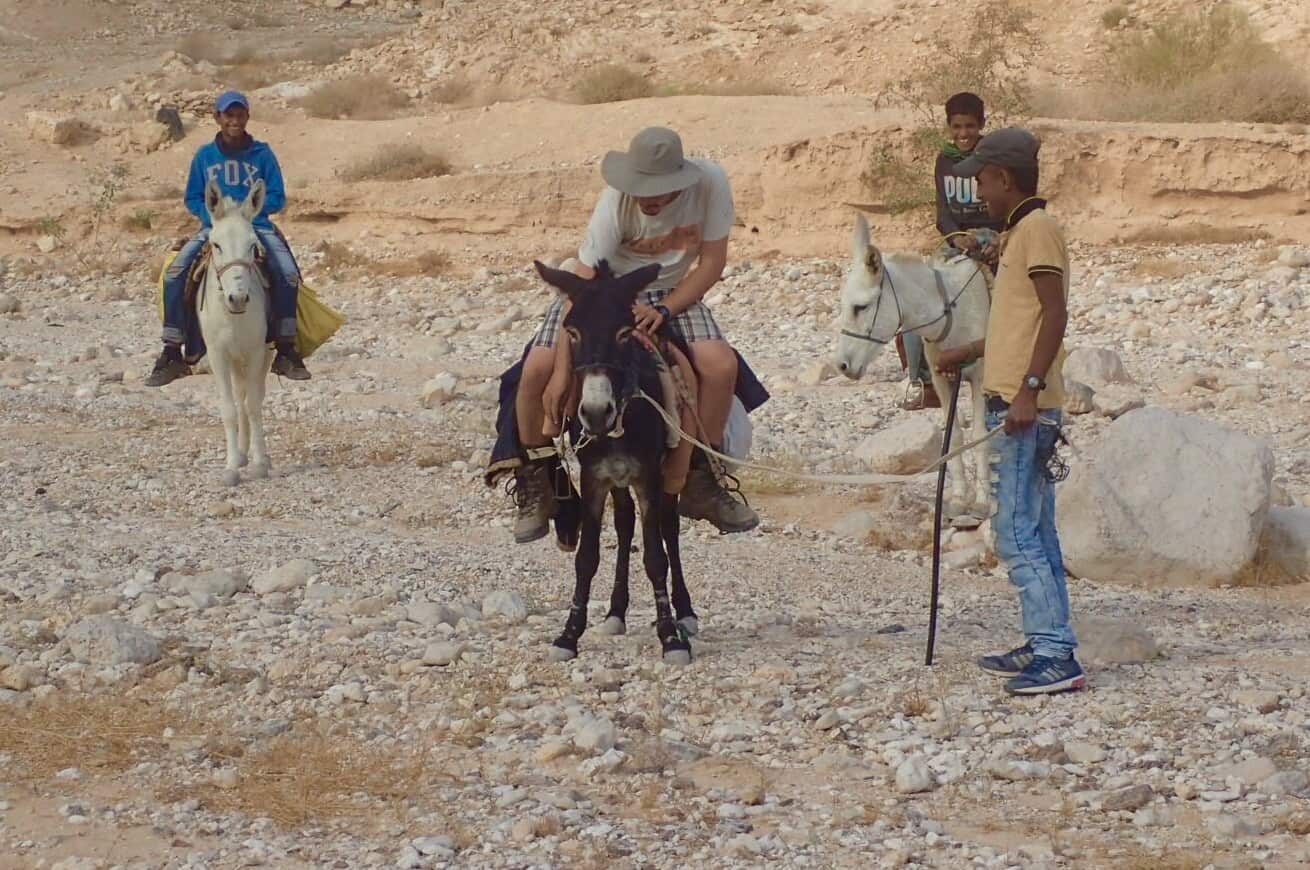 (As we neared camp, we started collecting driftwood for a fire) 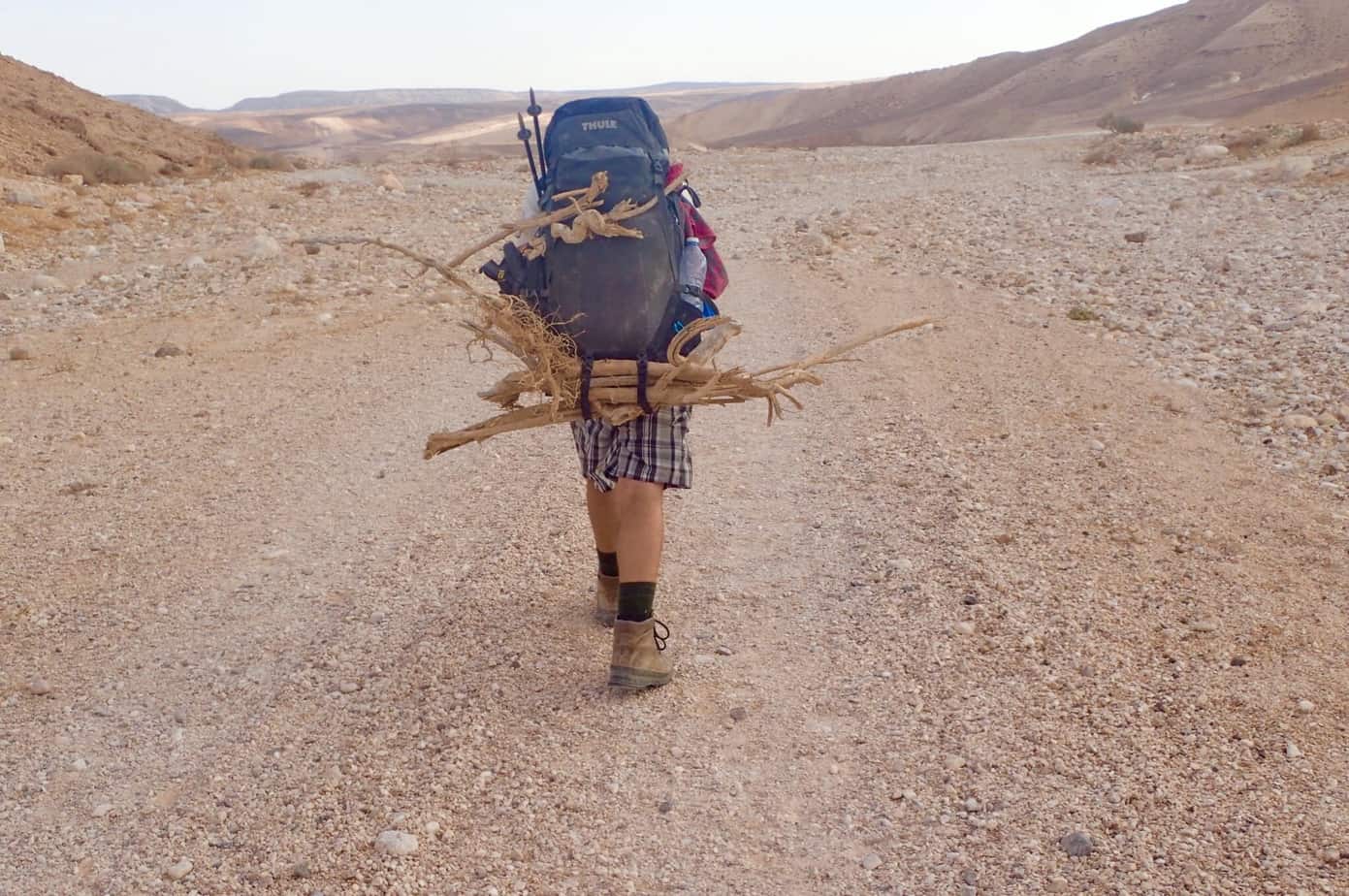 We reached the 24km mark and the camping area. As a way of protecting the wildlife, it is illegal to camp anywhere in the desert and you must instead be in a designated area. There’s nothing there except a bit of flat ground and signs of some old fires.

Gil went off to find our first water cache. As we don’t have any means of getting water each day, we have pre arranged for someone to drop 12litres of water for us each night at the camp spots. It’s a cleaver system. He sends us a video on Whatsapp of him walking to where the water has been buried and hidden. I was pleased when Gil returned carrying the large bottles.

Gil cooked some amazing pitta like bread on the fire using just flour, water and garlic. They were so tasty and surprisingly filling. As we ate, a desert fox with a huge bushy tail came strutting confidently through our camp. His head was held high and he didn’t even glance our way as if he was arrogantly showing off that he wasn’t scared by us. 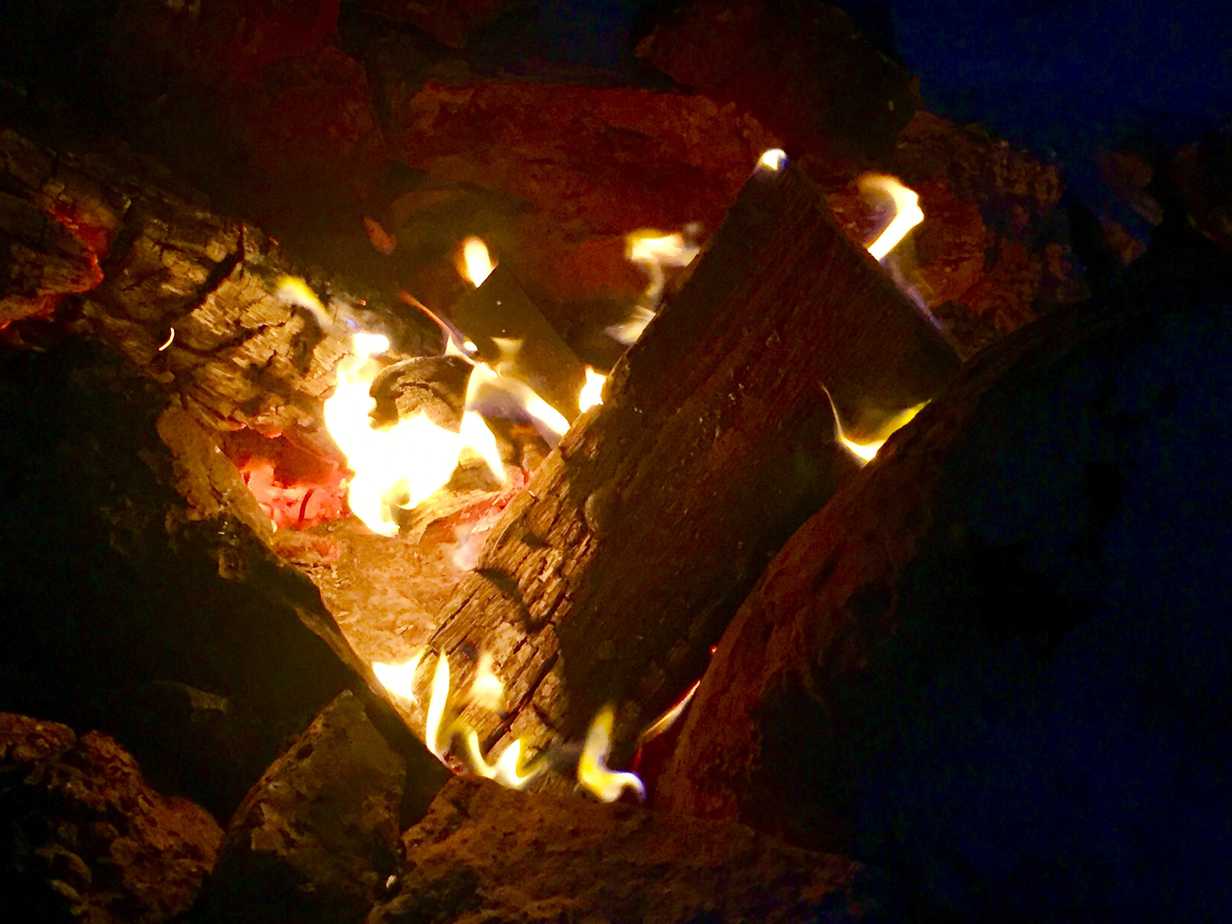 It was nice in the tent watching the fire burn down although the cloudy sky meant there wasn’t much star gazing. It’s so still and quiet being in the desert. I like it. This was amazing.

About 3am in the morning I heard Gil stir and start rummaging about in the tent. He kept nudging me in my side. I tried to ignore him but he was making too much noise. I opened my eyes reluctantly to find out what he was doing and expected to see him leaning over me as the noise was right by my ear. The moon was bright and flooding a lot of light into the tent. Gil was lying facing me, asleep, tucked up in his sleeping bag. I felt another big nudge on my back!!!!!! I jumped up at lighting speed and swore very, very loudly.

Both Gil and I scrambled for our head torches but when we shone it out of the netting, the creature had already gone. It was probably that bloody arrogant fox from last night! My heart was racing so it took me ages to get back to sleep. When the alarm went an hour later I mumbled to Gil to ignore it and we both slept through to 6.20am.

When packing down the tent I noticed lots of paw prints where the animal had tried to get in. Our MSR Hubba Hubba tent is my most prized procession, I love it. You can put it up and down in less than a minute, it’s feather light and has a smart 1 pole system that makes it really spacious. It’s also super prices. I would not have been impressed if there was any damage. Thankfully, it all looked OK though. 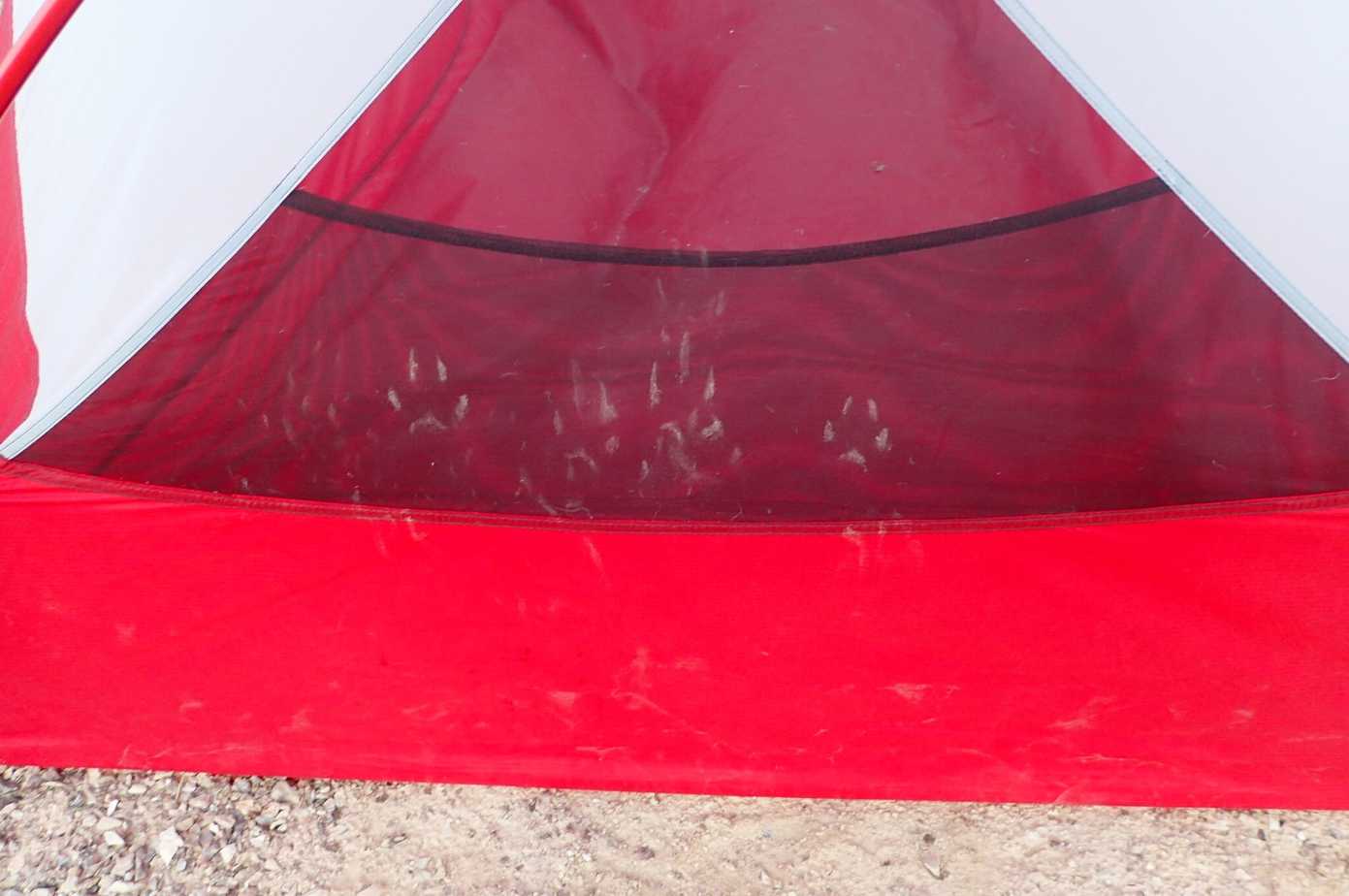 It felt like it was going to be a hot day, made worse by starting later than we normally do. Today’s a short day though. We had a lot of climbs early on as we had to get over the hills that all sat in our way. Nothing too big but surprisingly strenuous. From the ground they always look quite small. Then when you start climbing you hit a point when it gets steep, your heart is pounding, you’re out of breath, your legs are burning and you are taking tiny steps that seem to get you nowhere. Whatever you do, don’t stop. It’s so much harder starting. I keep going until, at last, the ground flattens out and the peak is in sight. It’s always a satisfying moment, like a mini triumph. Plus I never look at the view until I reach the top. It rarely disappoints. 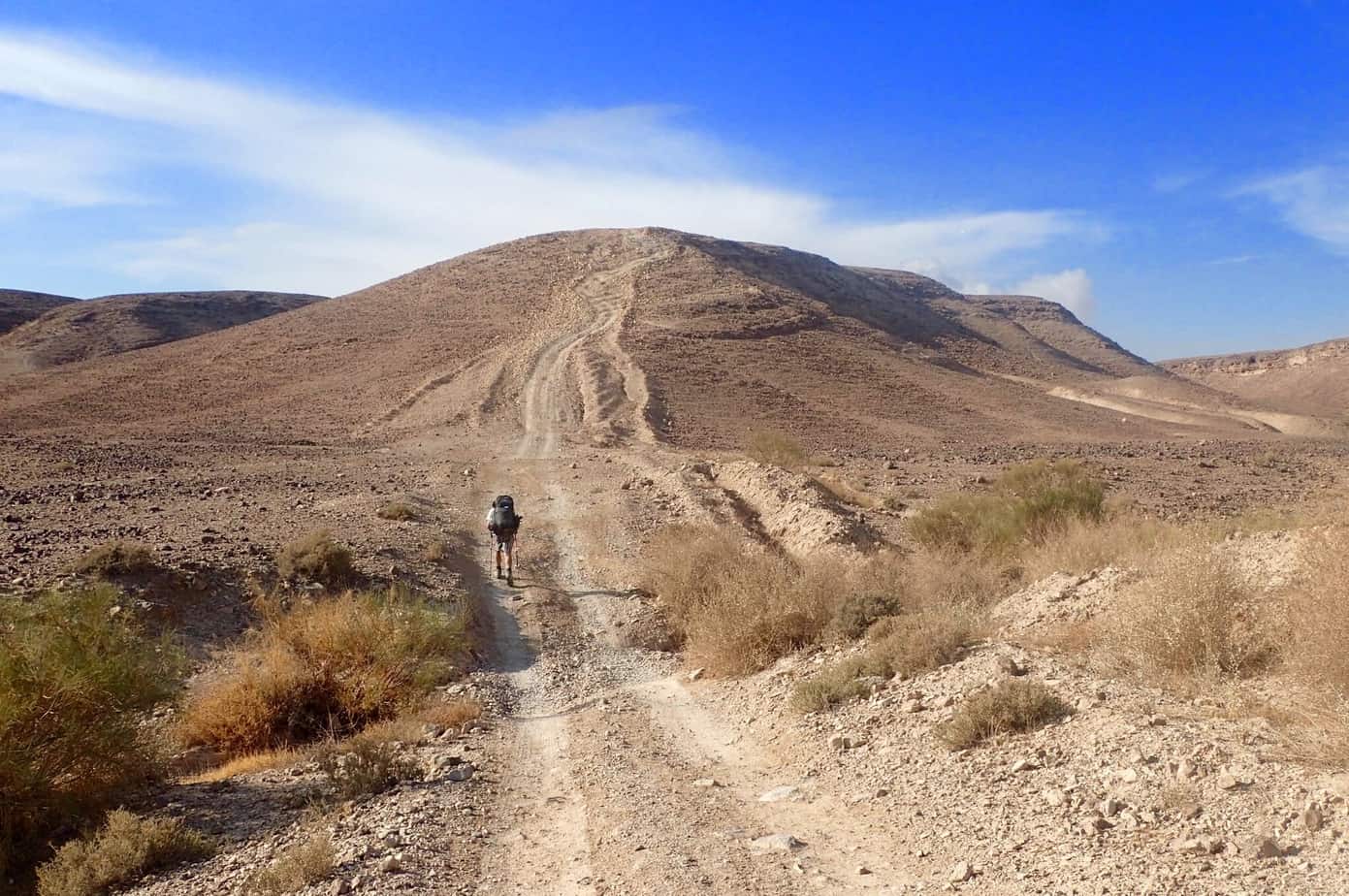 Maybe it’s just me but, as the day goes on, these climbs always seem longer. 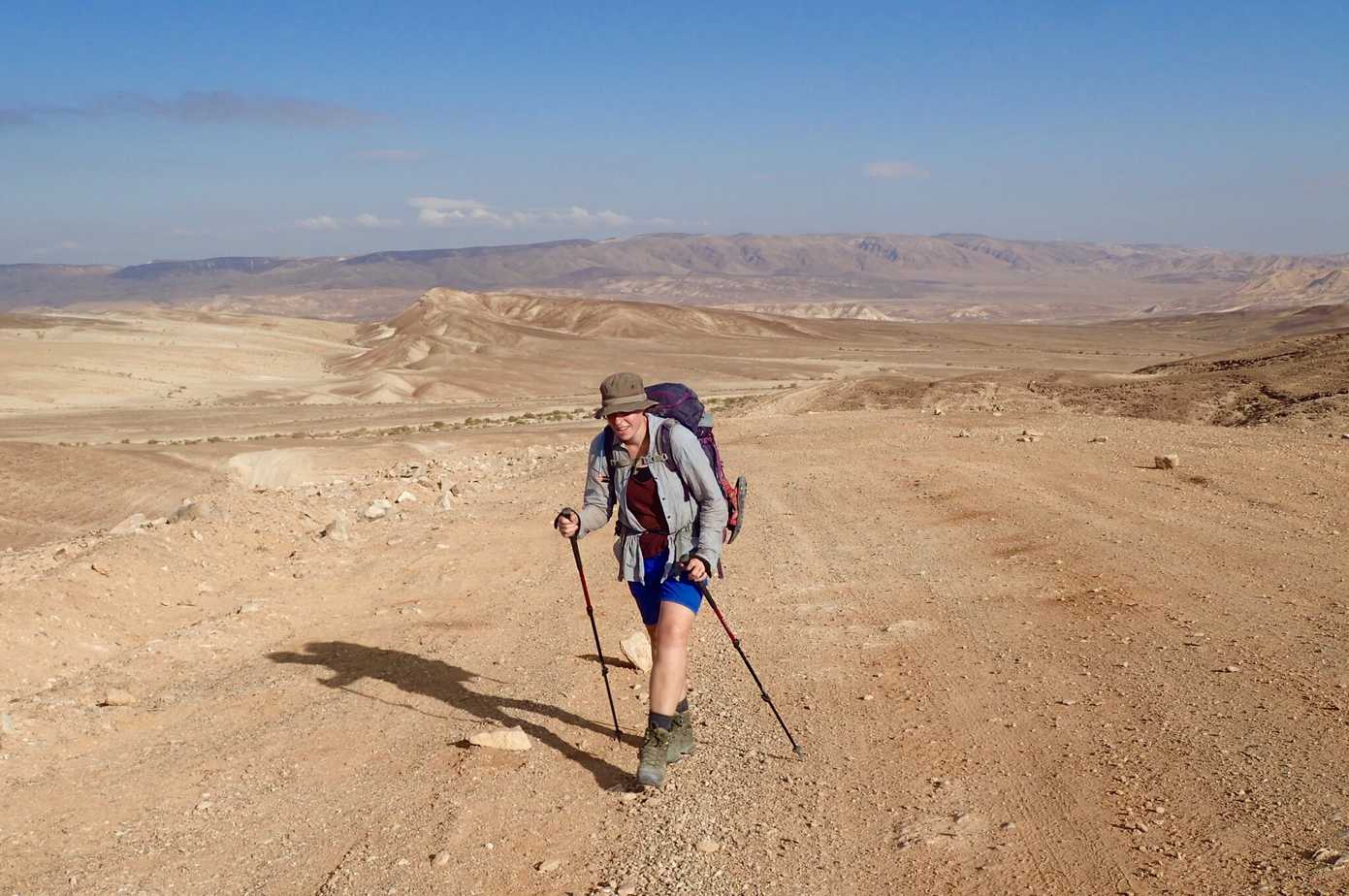 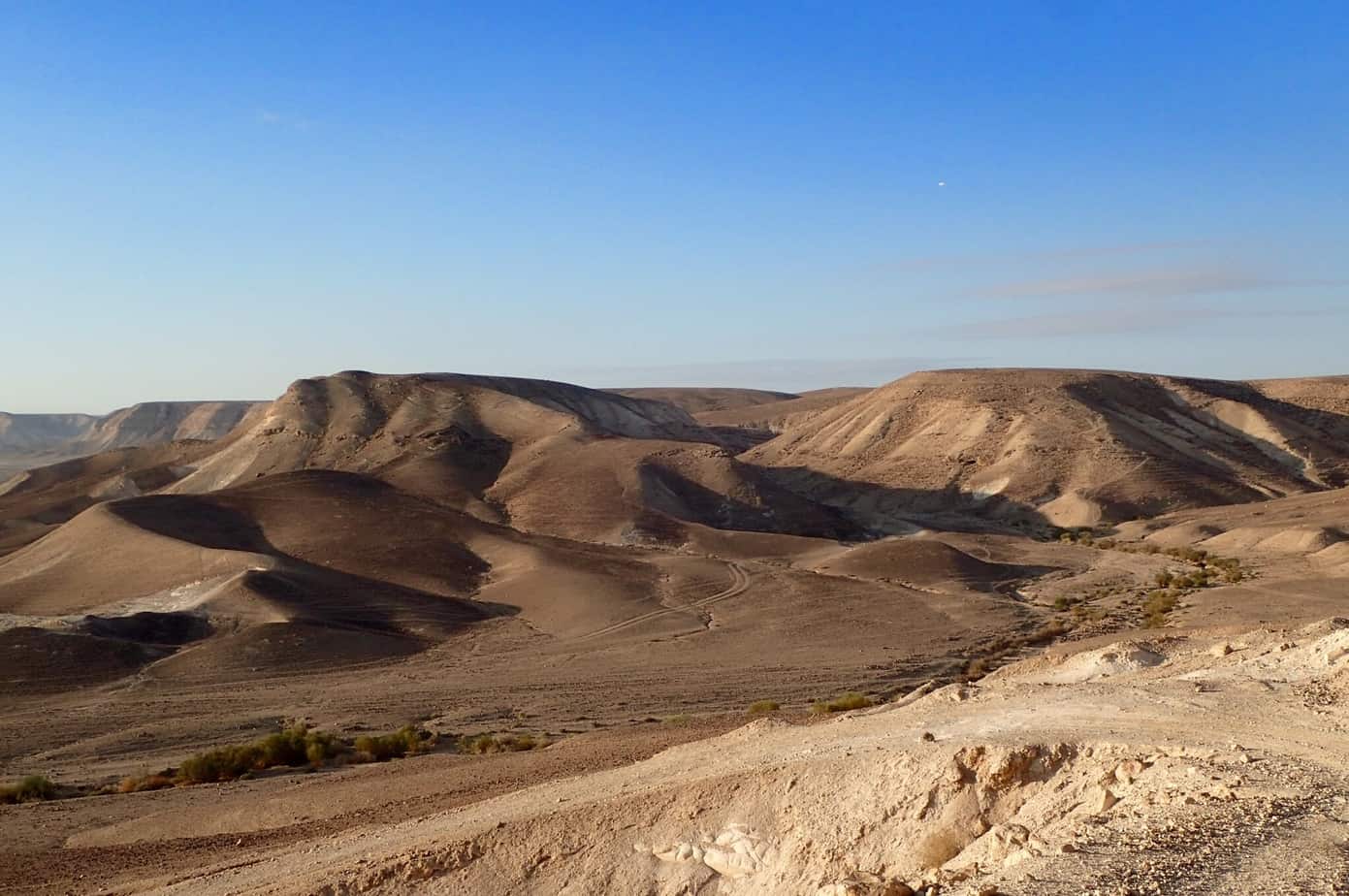 With 8km left to go, the ground flattened out and we found ourselves following one of those long never ending roads. It was a boring walk. Usually I’m happy looking around me or, if that fails, I potter with thoughts in my head or listen to music. Today though, I was just a bit bored, it happens sometimes, even on an epic adventure.

We passed under a conveyer belt that is 18km long and takes potassium from the Dead Sea to the factories. Surely it would have been a lot less damaging to put the factory next to the Dead Sea or, even better, not have it at all! 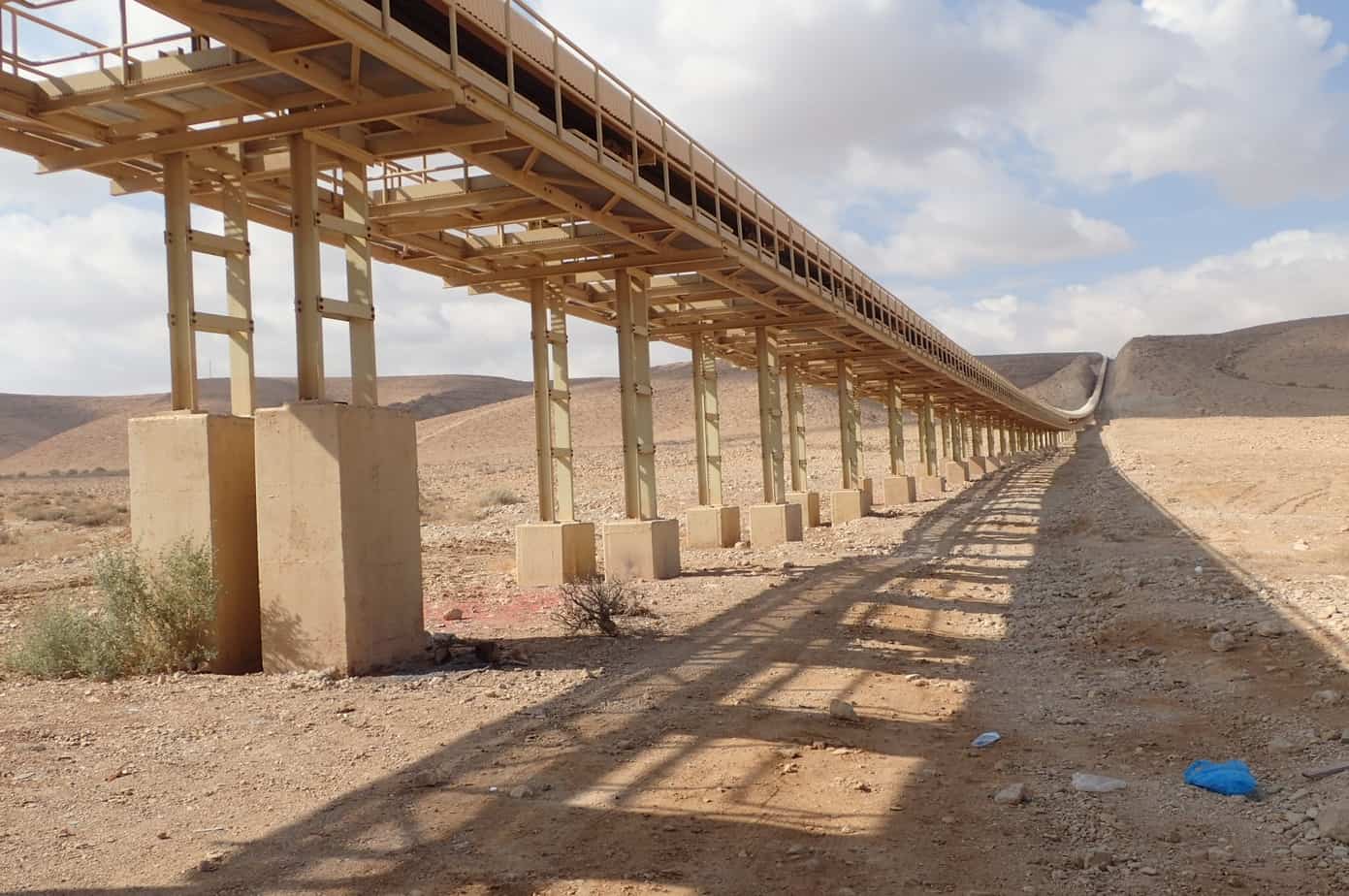 We were close to our next designated camp spot and also where our water had been hidden for tonight. We passed a huge noisy quarry with a large road next to it with trucks going back and forth. It was dirty and overbearing after the peaceful quiet of the desert. Just past the entrance, we found the designated camping area. You’ve got to be kidding me?!

It was a disgusting spot. Filthy from the quarry and littered from factory rubbish and people’s rubbish, it sat right next to the road and the drilling from the quarry was continuos. It was swarming with flies from all the dirt. How I wished I could have 5 minutes with the person who chose this area! I had spent days walking through the desert. I hike because I like nature and quiet. In all that space, where industries have been allowed to destroy the landscape, are you telling me you cant find a quiet spot for hikers to camp overnight? 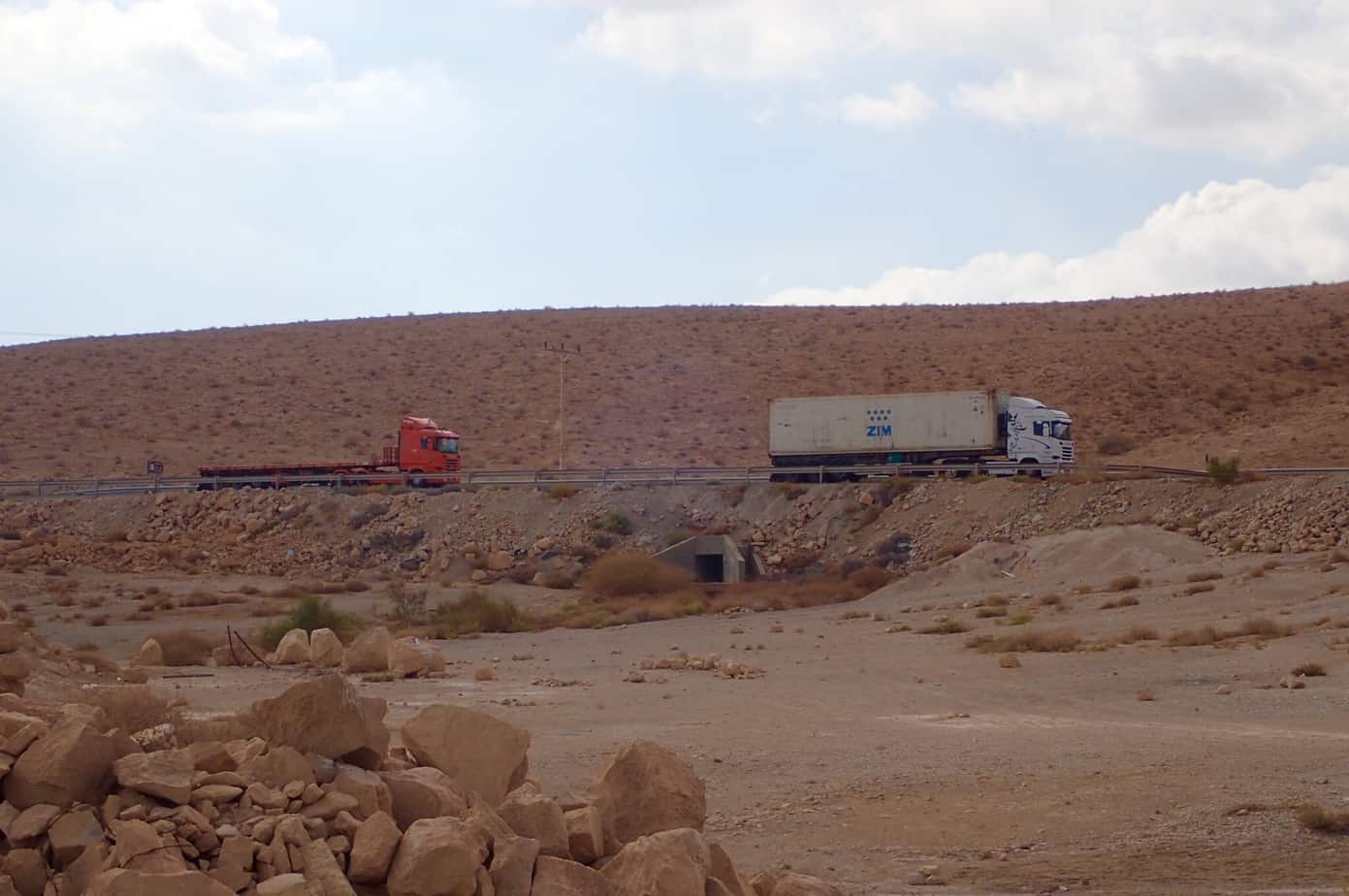 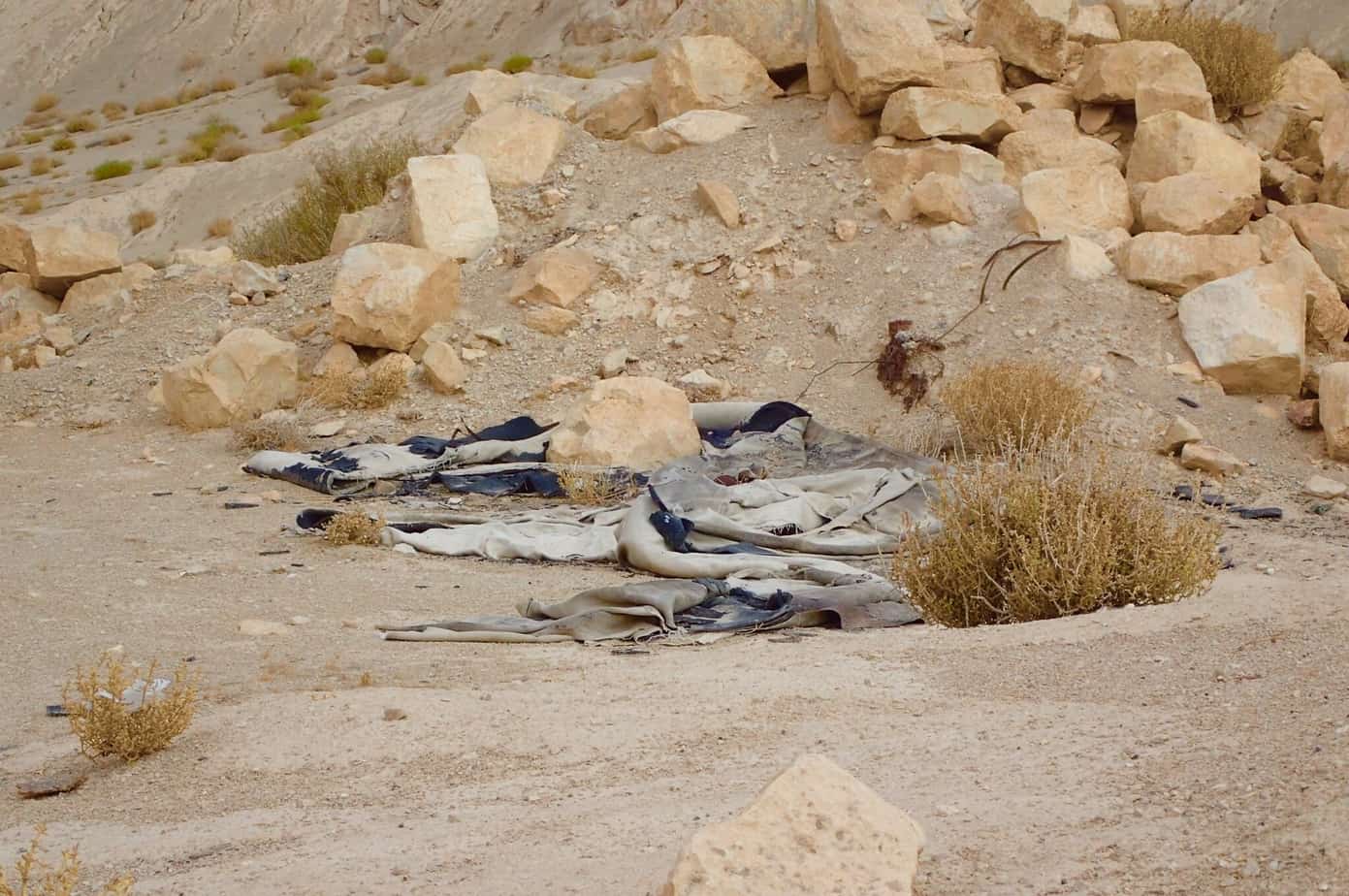 The next camping area was 12km away, too far to walk, especially with 8 litres in my pack for cooking and tomorrow’s supply. I’m a conscious camper and always care for the land where I hike. I leave no trace and even take other people’s rubbish away with me (although not here as there is too much to carry). I know the reason you have designated areas is to protect the land, but, I just wasn’t willing to sleep in the dirt, so we back tracked and camped around the corner, hidden from the road. It still wasn’t ideal but I didn’t want to go too far into the reserve.

For anyone doing this walk, plan to camp at the Craters Gap!