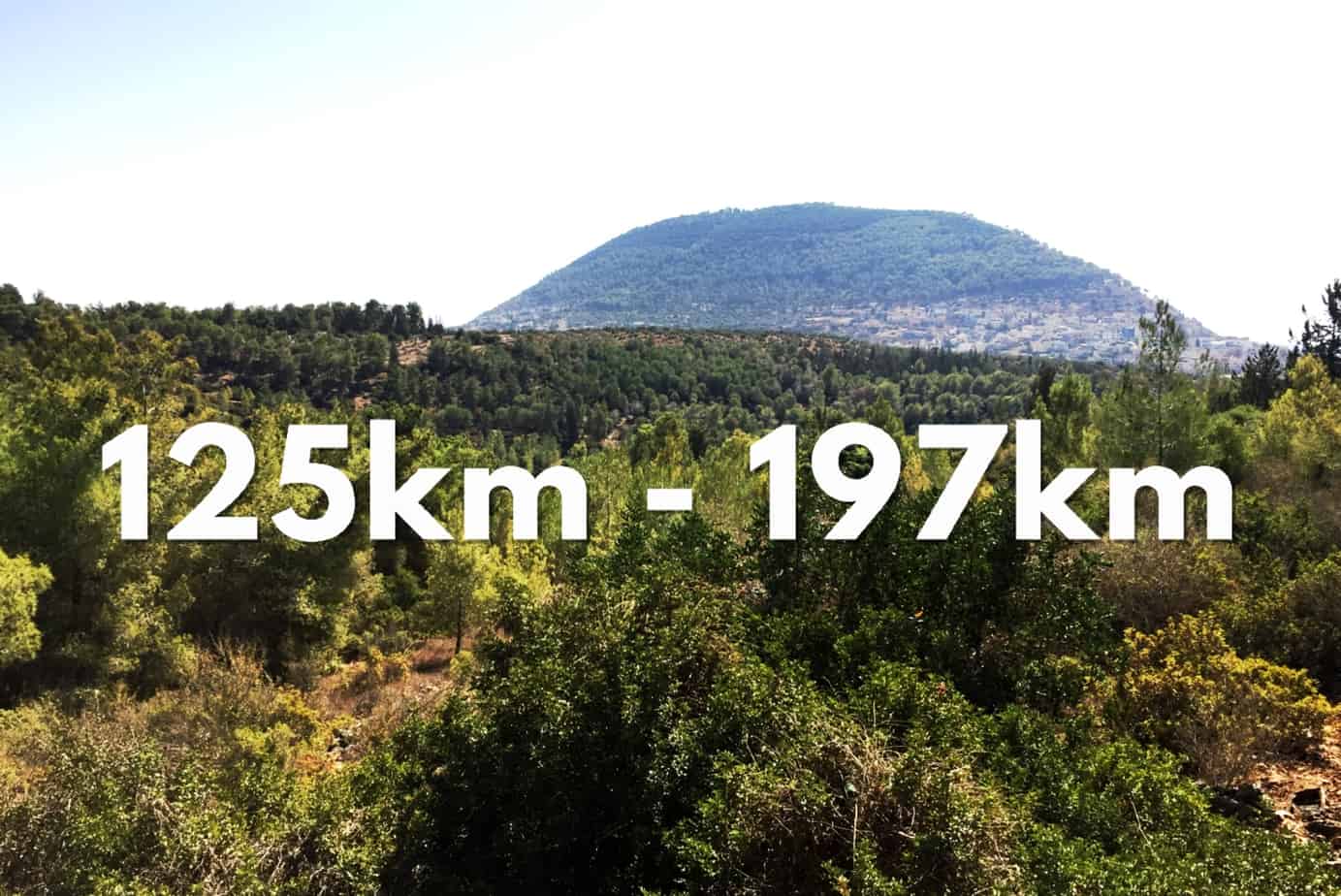 We left the kibbutz at 5am and it was surprisingly easy to get going again (although I was really sad to be leaving the pool behind….if only I could fit it in my pack!). We cut through a dark path in a nearby farm that would lead us back to the trail. I had the fright of my life when we were looking at the map and I heard a loud rustle in the bush next to us. I shone my torch beam to see what it was and there was a man standing there!!!!! My heart dropped.

When my eyes adjusted I realised it was just a black cut out figure (why here?!). I couldn’t bring myself to look away. I had recently read a really scary horror book called Dark Matter which has a part when a man looks out his shed and sees a driftwood post. When he looks away and looks back again it’s closer! My vivid imagination kept my eyes on the cut out until we were well out of sight. 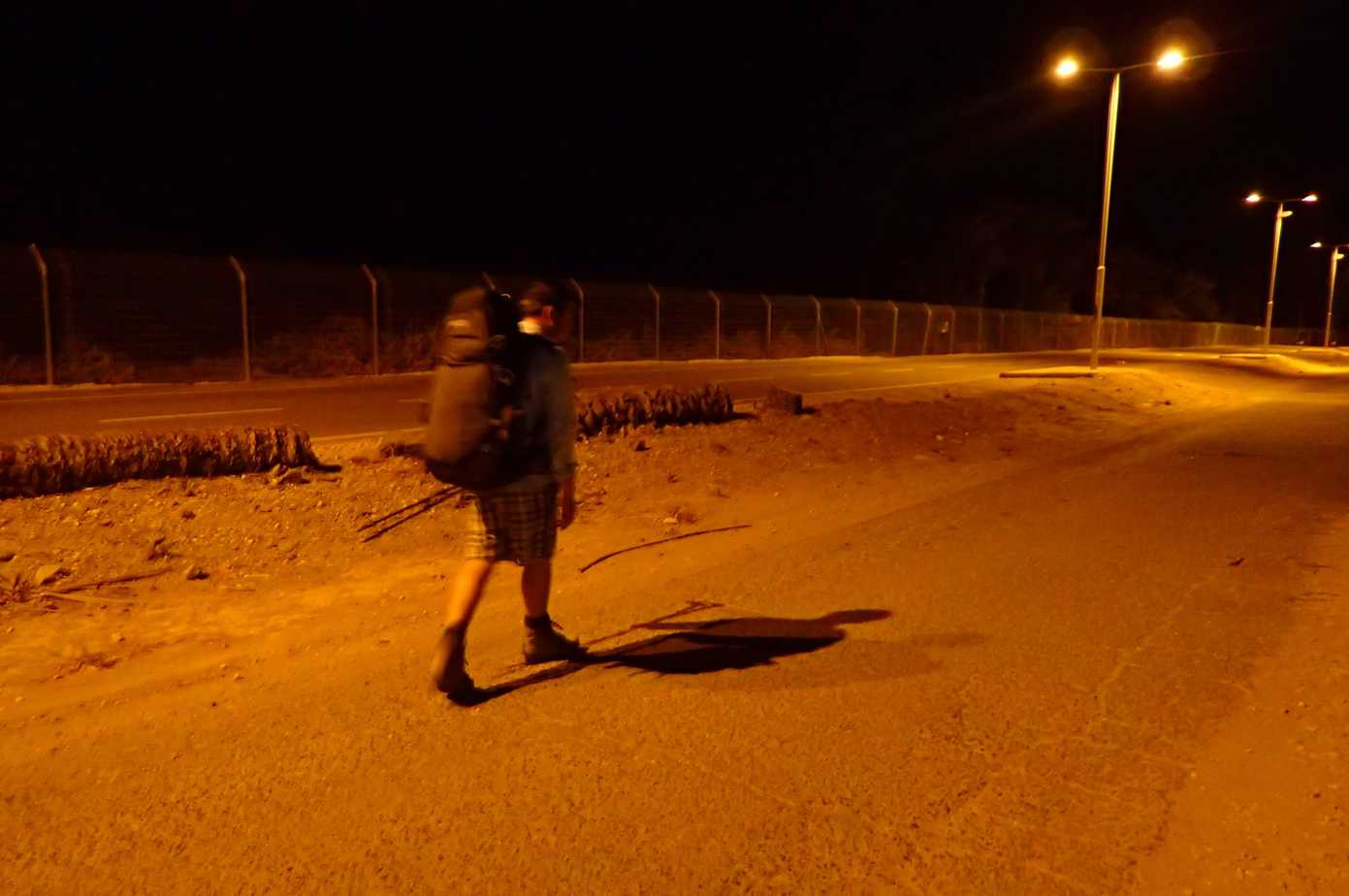 Potential ghost attack over and we started winding up to Chen view point. On the way we stumbled across Tal, who had been wild camping, for the first time, on her own. She was planning to walk for about 2 weeks and this was her second day. We left her to pack down her camp and said we’d look out for her later.

When we reached the top, we found a small library where people leave books that you can borrow if you are trekking on the trail. 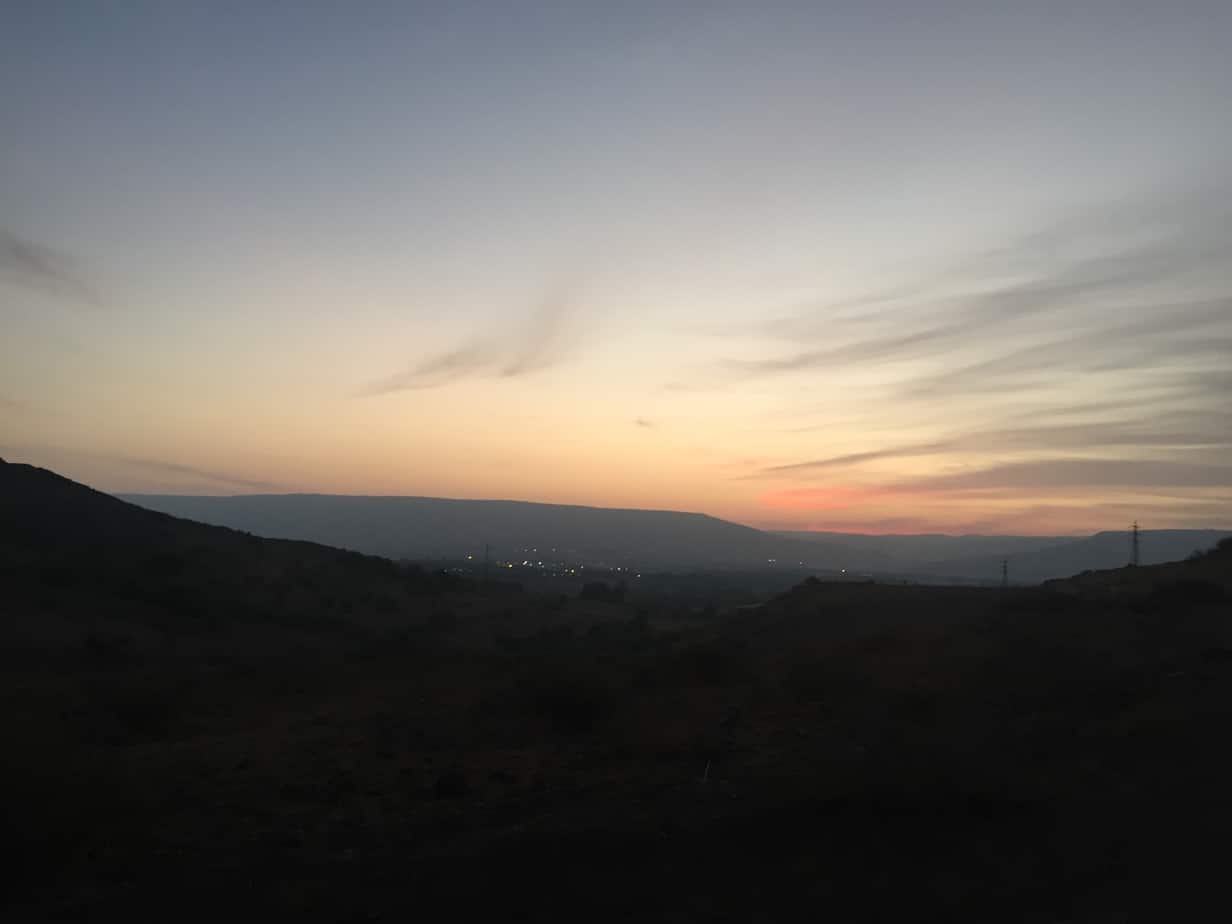 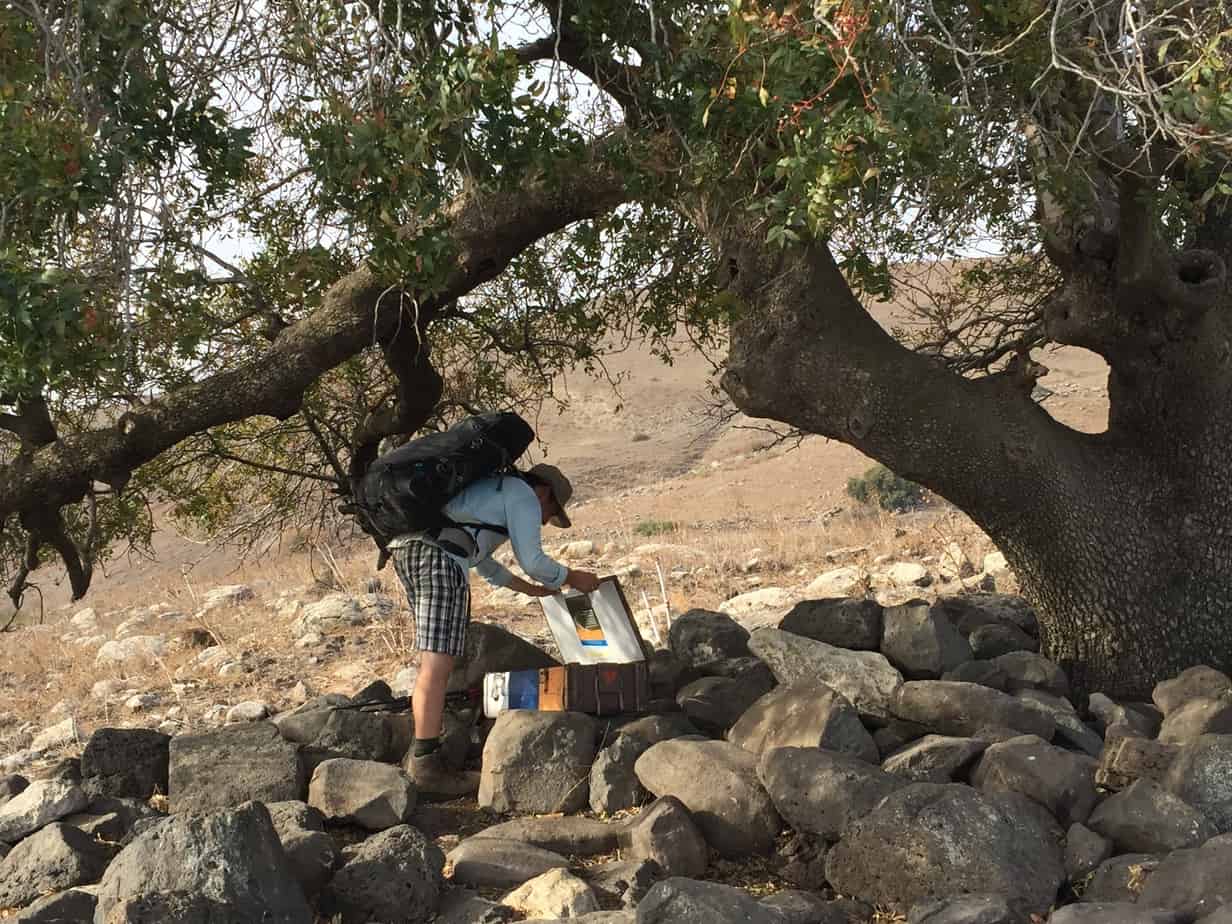 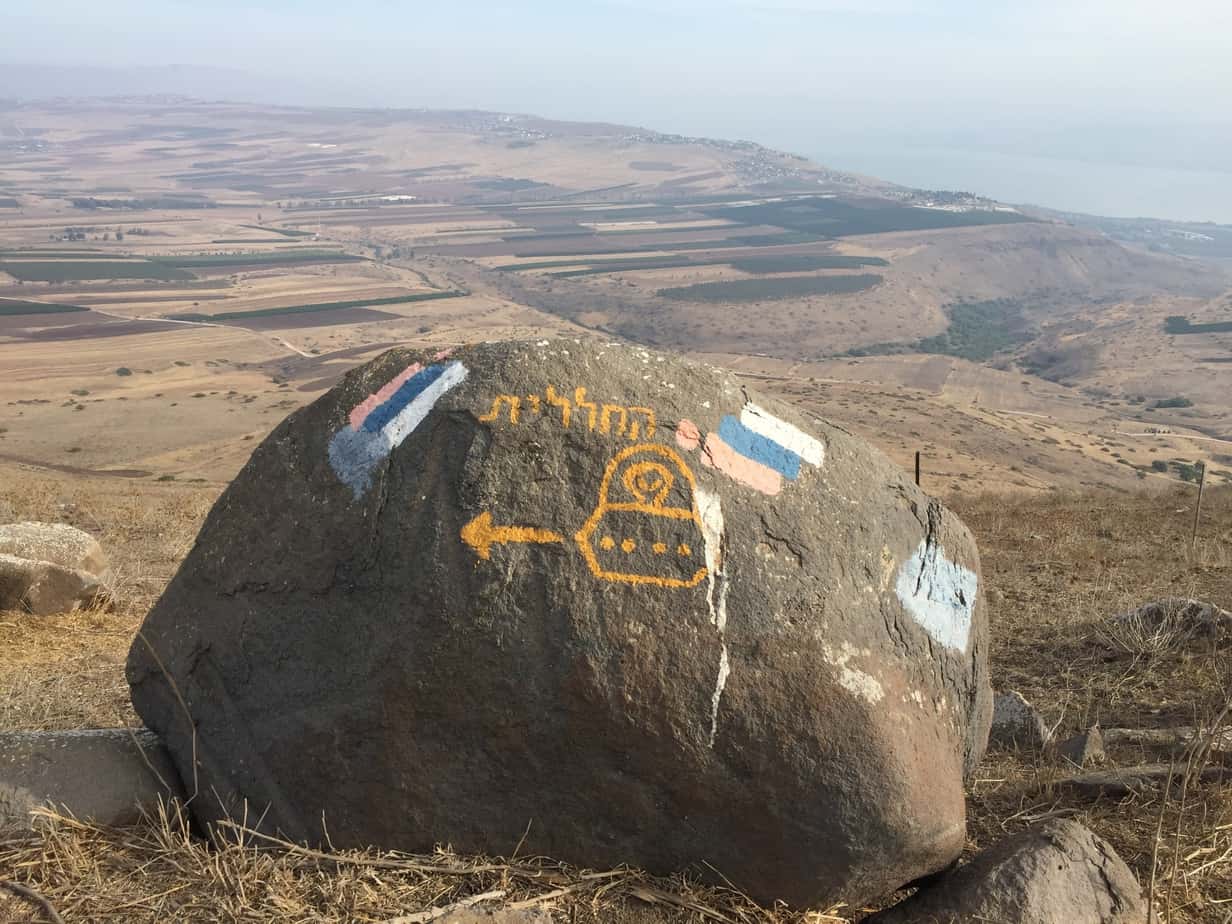 Tal eventually caught up with us. We decided to carry on together and she began telling us about her recent travels in India and her plans to train to be a doctor. 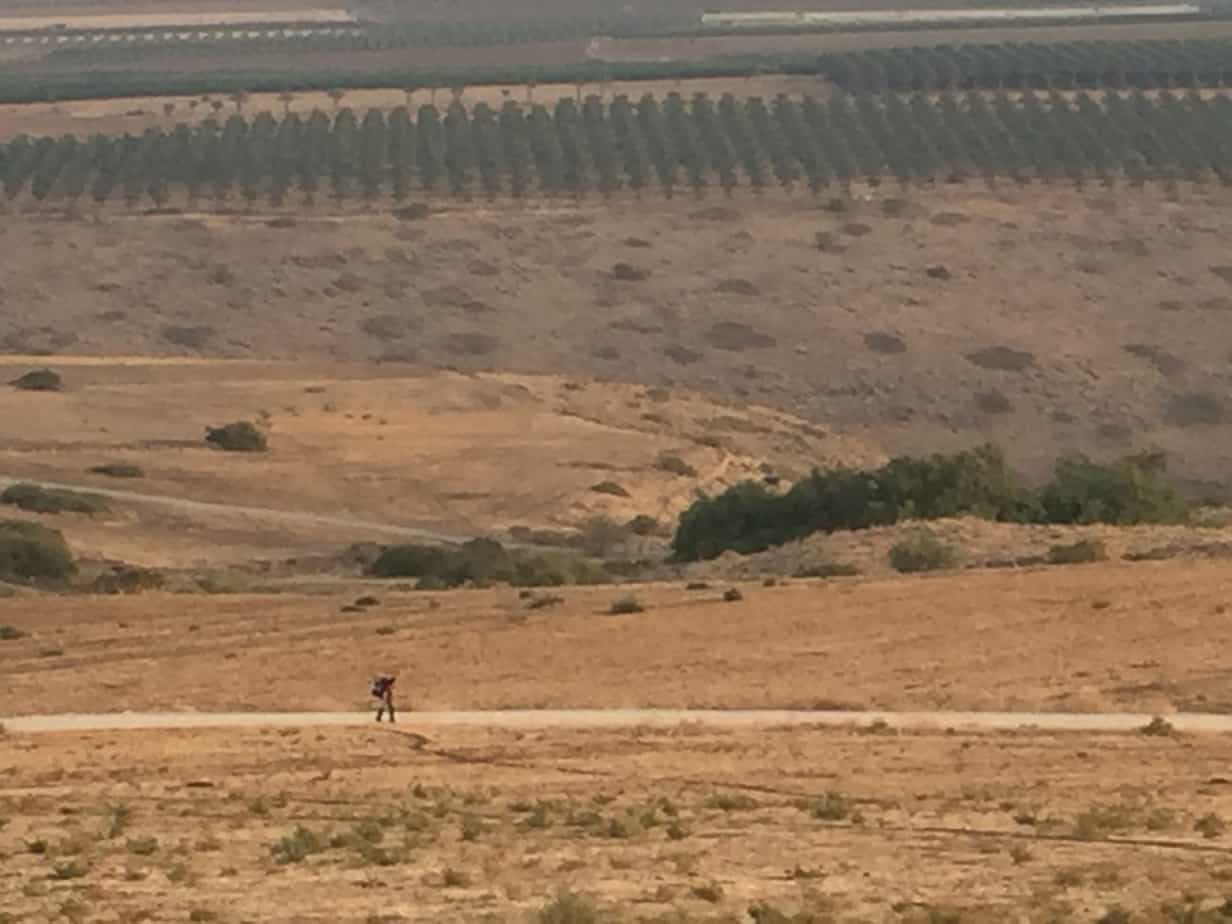 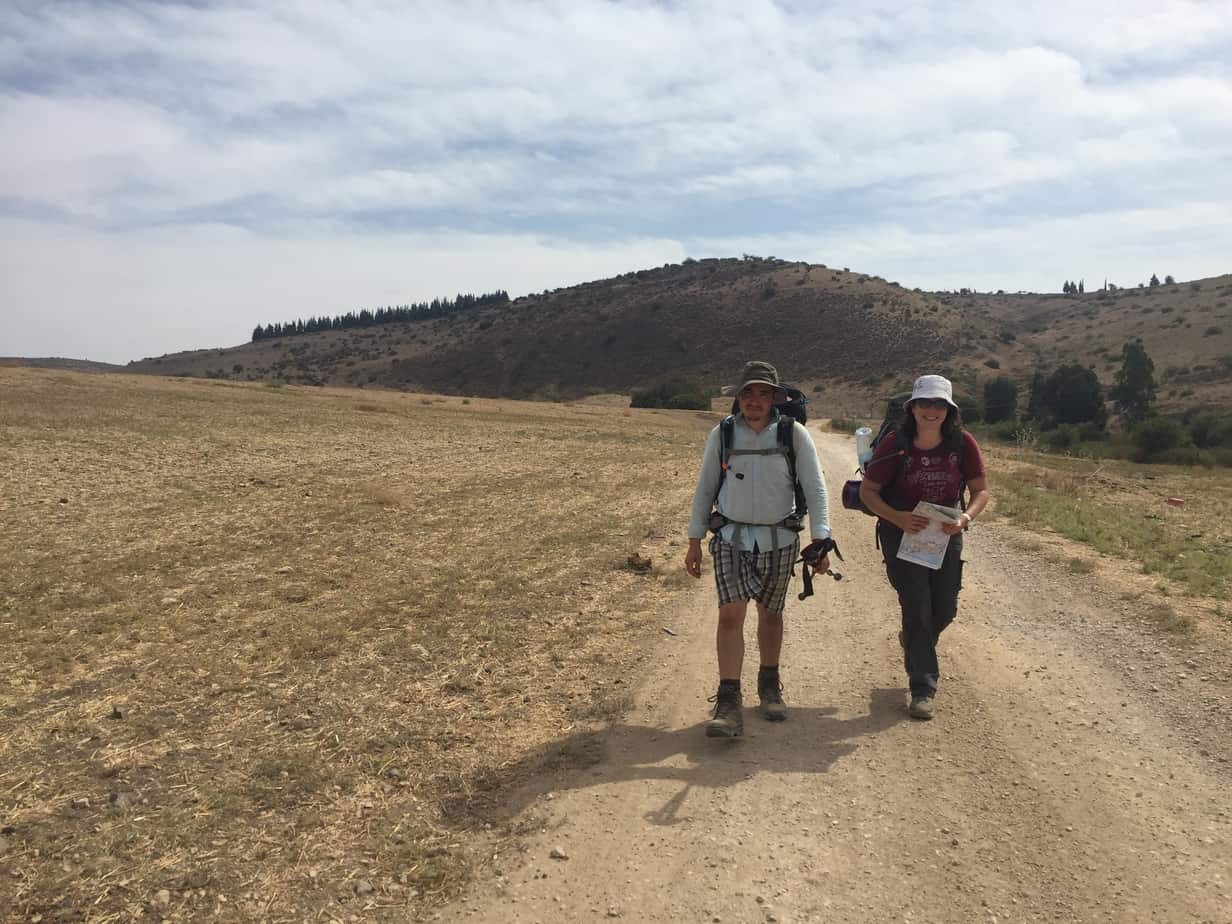 Having company completely distracted me from walking and the time really flew by. I like speaking with people. We stopped for lunch by a spring in the ground that looked like the well in the film The Ring (all about horror today!) – no way I was going in, but Gil and Tal didn’t hesitate. Apparently it has a resident albino crab. 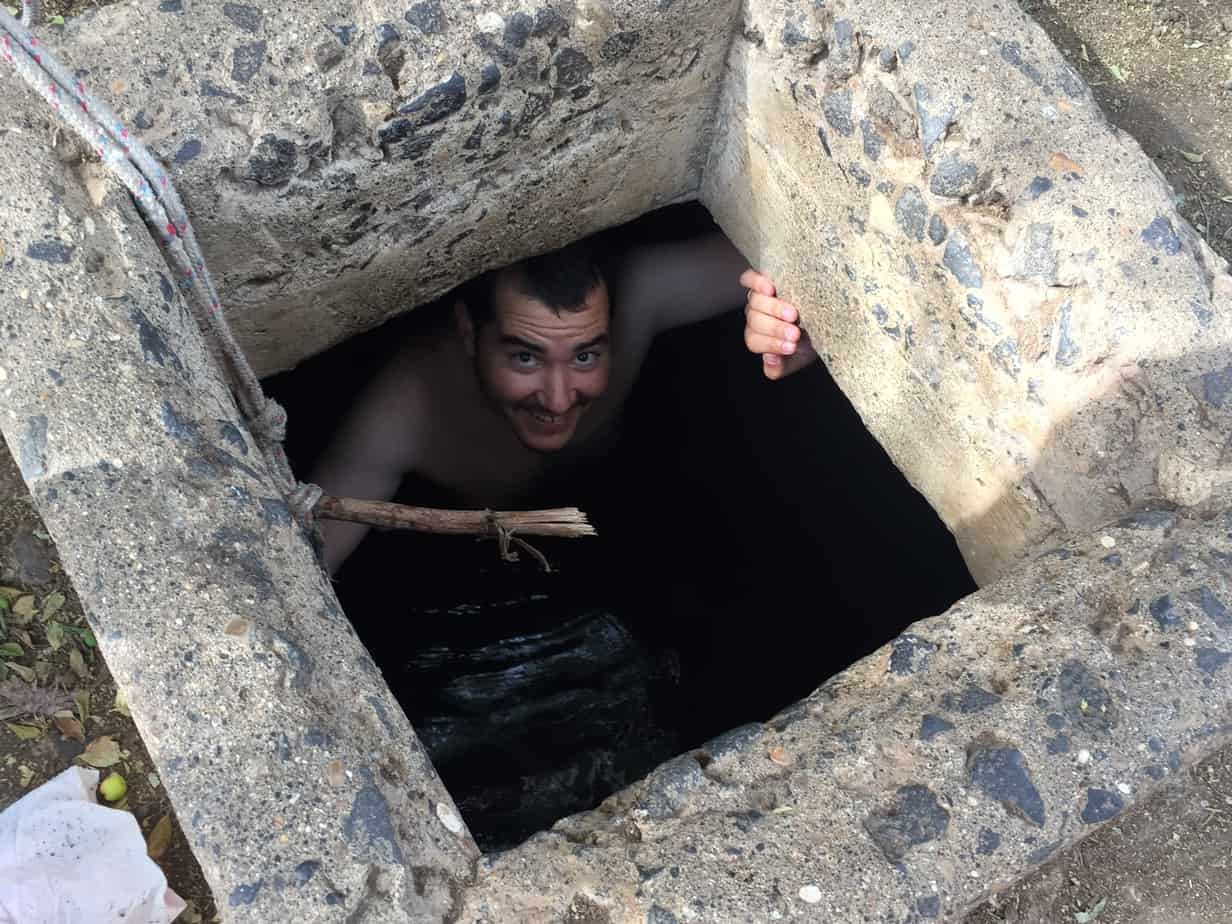 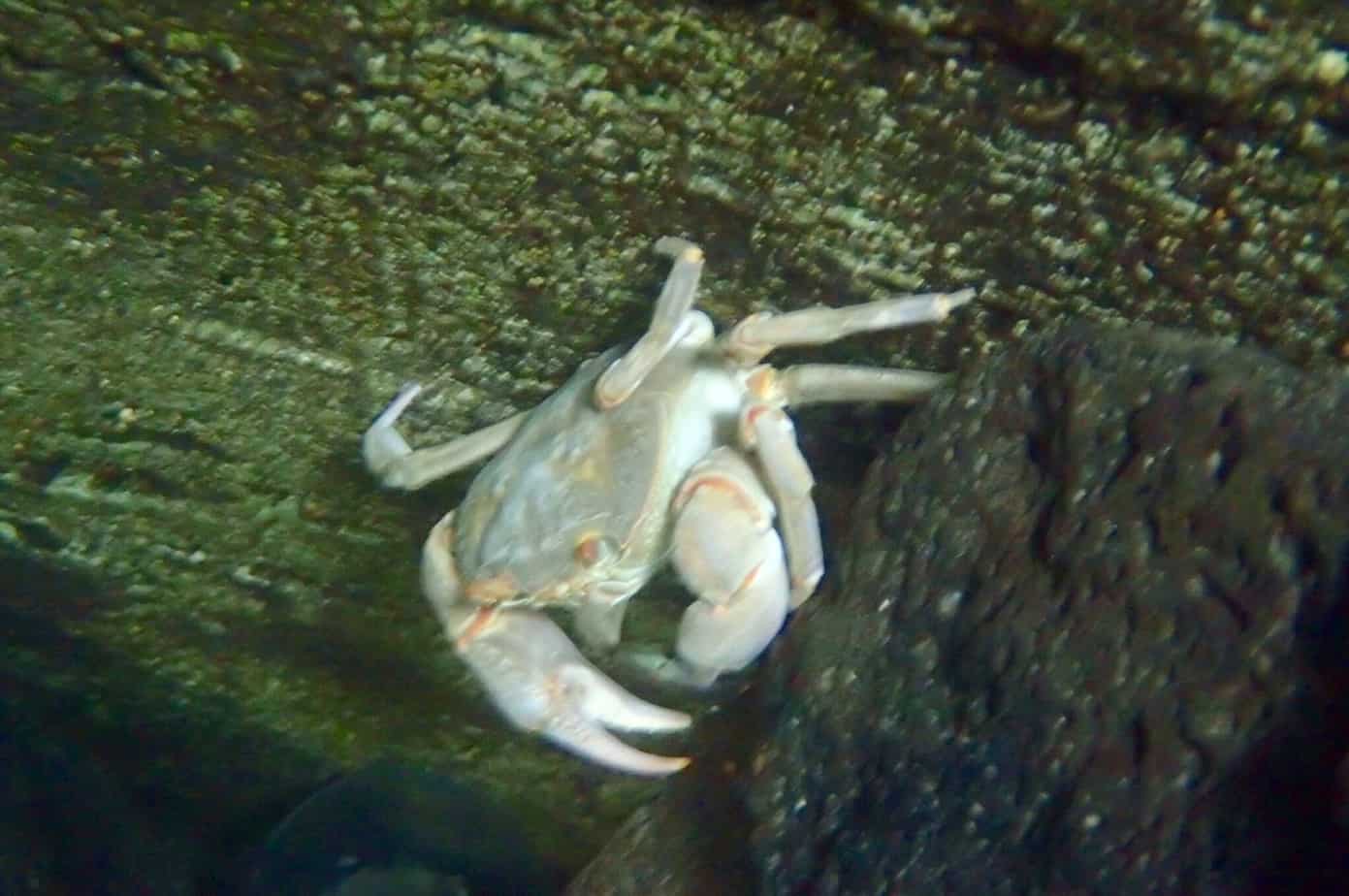 The path flattened out and meandered around agriculture fields. We found ourselves not far from the base of Mount Tavou, at Kfar Kish, where we had planned to stay. Tal wanted to sleep at the top of the mountain, so we parted ways.

Someone in the village had arranged an area where hikers could sleep free of charge. It was basically an open warehouse on a farm with a few mattresses but it had a shower and electricity and saved us the effort of having to put up our tent.

Later 2 young lads joined, Noam and Omri, both fresh out of leaving the army. They were planning to hike the full trail but one of them said he was thinking about quitting because it’s not been much fun. It was nice to hear that we are not the only ones finding it difficult. They were both really sweet and I had a really good time joking with them. 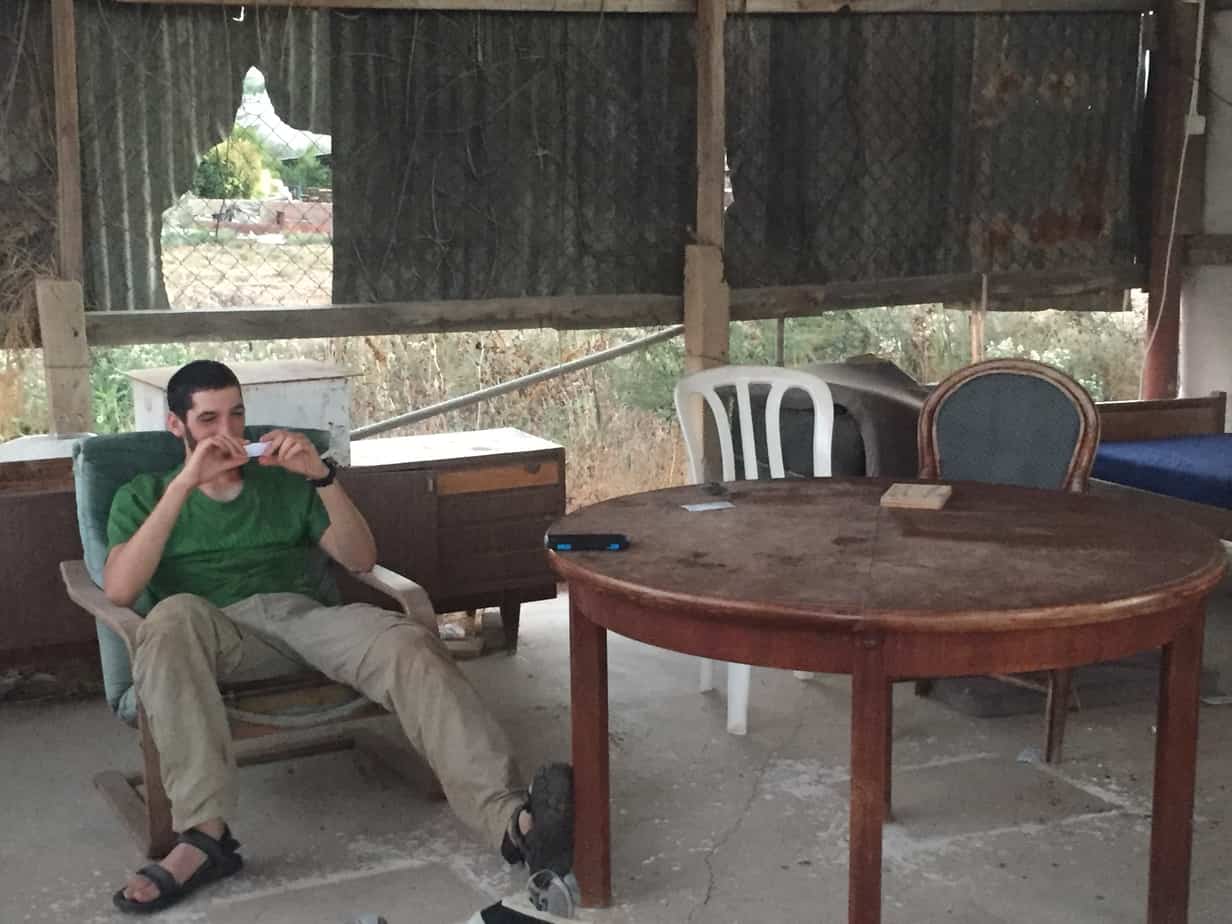 At 8pm another hiker shows up wearing only a t-shirt, boots and very short boxers! At only 19 years old this boy was a right old character and entertained us with weird stories and his clumsy ways. After going a week seeing barely anyone, 4 people in 1 day seems like a party. I like company. The downside, of course, is I didn’t get the best nights sleep as I went to bed long before the others did.

Starting a day with a gruelling 600metre climb is tough going. As I made my way up Mount Tavou I kept thinking I was near the top, but when I would look at the map we had barely gone any distance. The climb really took it out of me and I felt exhausted when I finally got there. 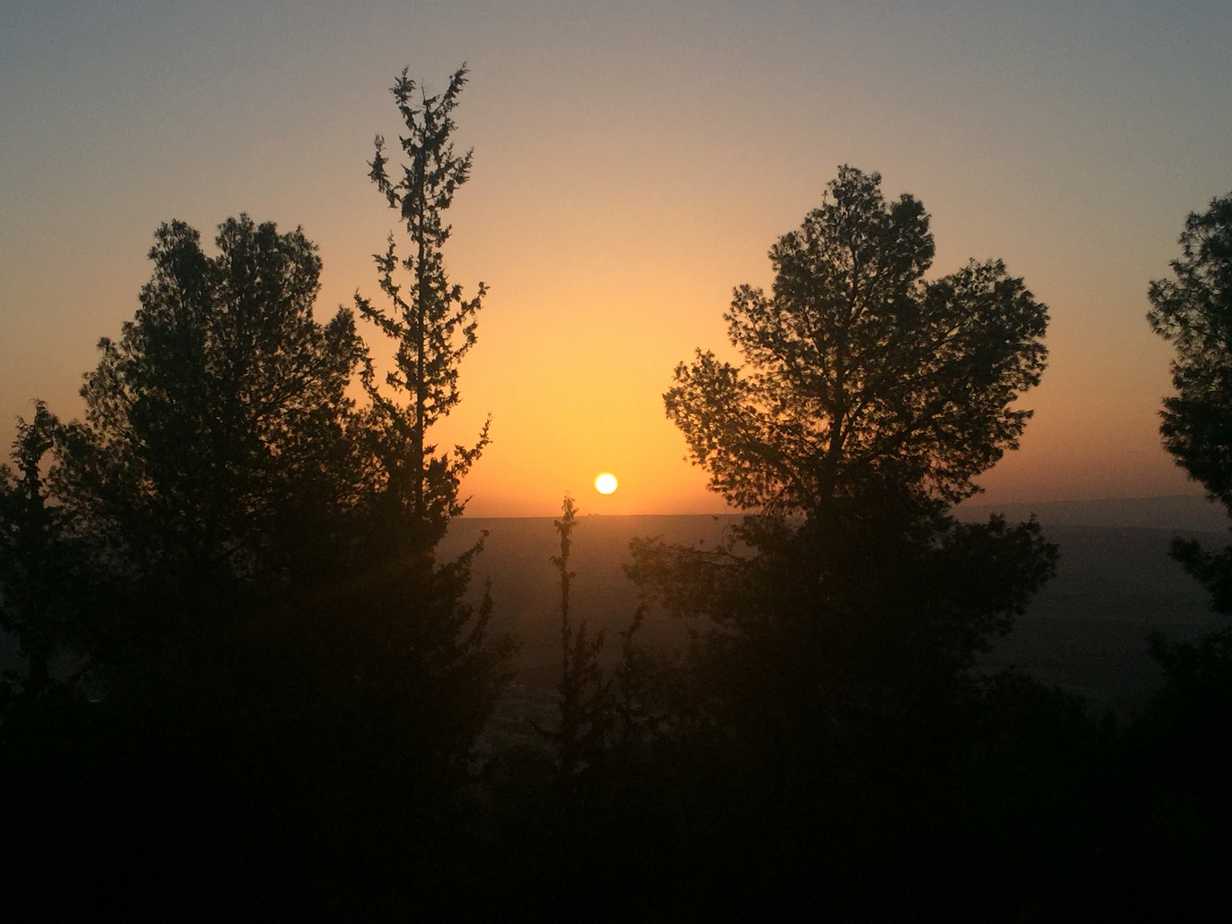 There is a beautiful church and monastery hidden on the peak amongst the trees which provided me a brief moment of quiet. 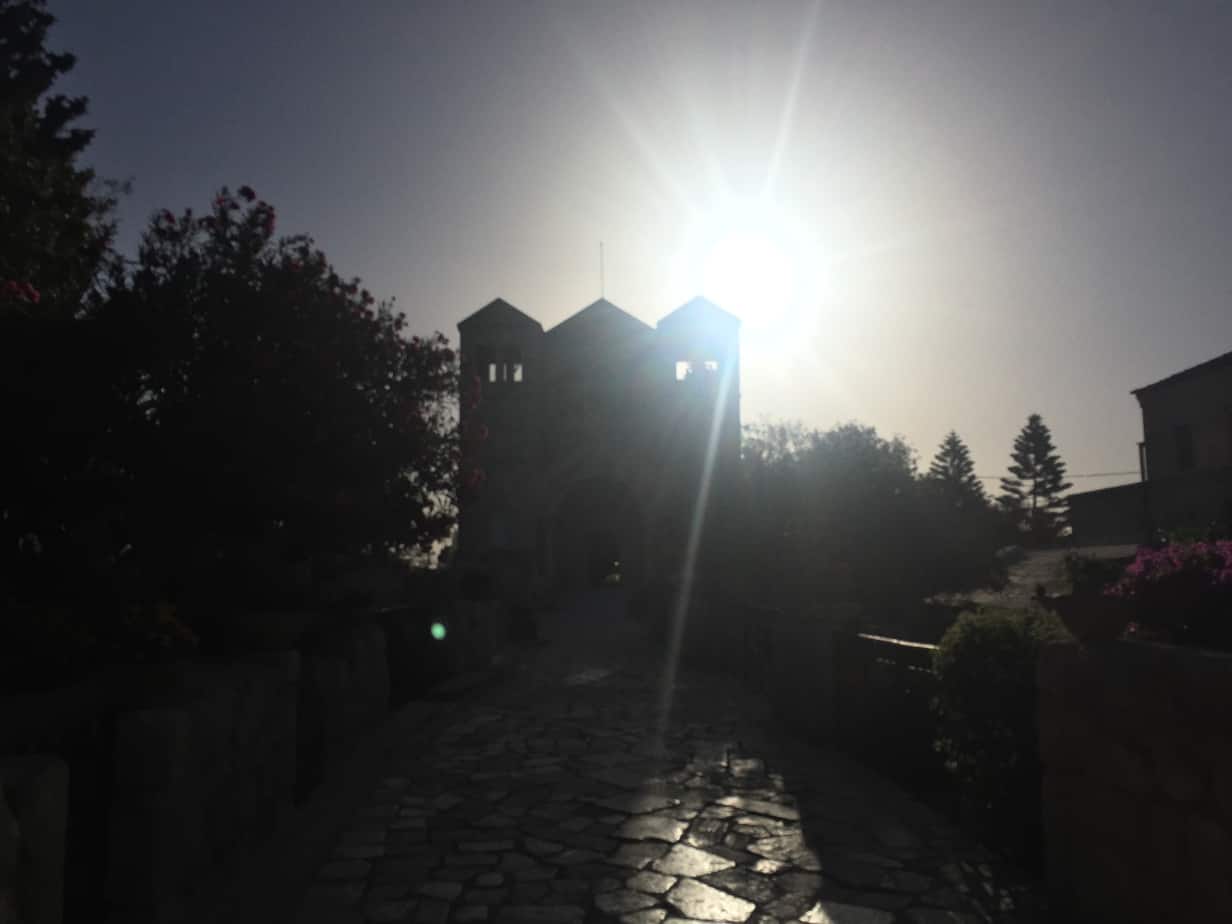 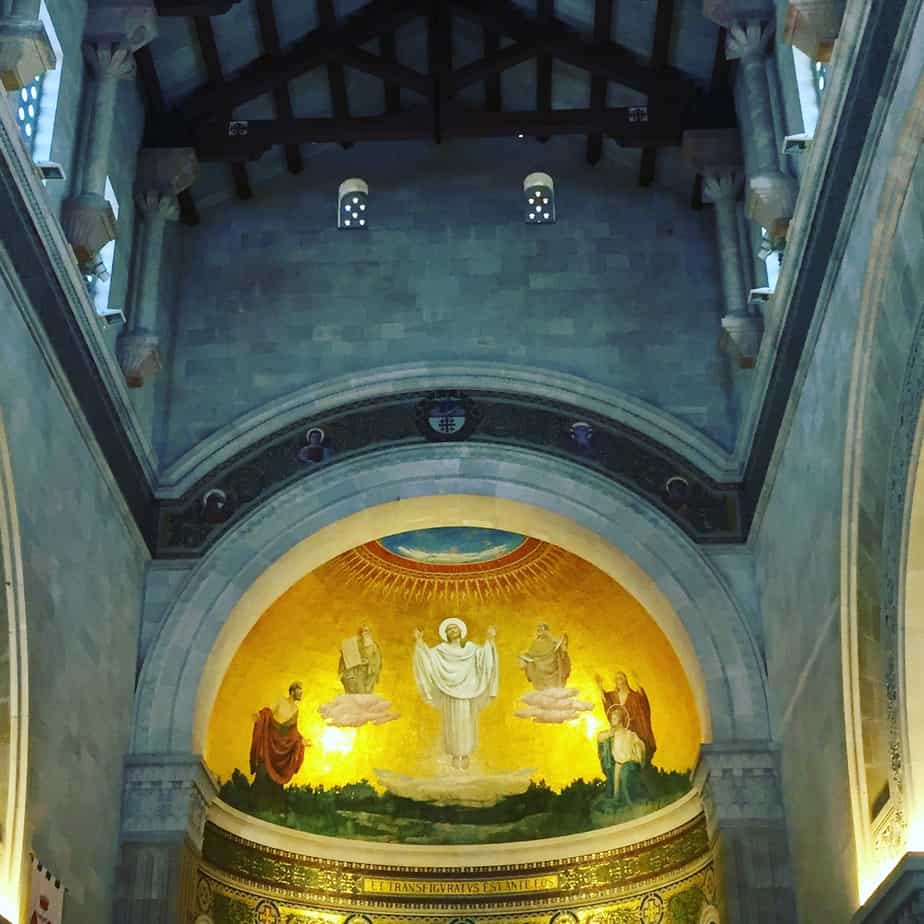 The way down was steep and slow. The terrain was sandy and rocky which took a lot of effort not to slip and lose my balance. When I reached the bottom I felt drained, like I had nothing left in me. We had only covered 6km. We still had 18km to go and another 600metres of climbing. Normally we start early and finish early but today, with our slow progress, meant we would have to continue through the hottest part of the day.

The 32 degree heat was melting me from the inside. It was so hot. By 11am I had nothing left in me to give, I just broke down as we rounded the base of Mount Deborah, more uphill. I was so tired. Everything was such an effort. Yesterday had been easier so I thought maybe my body was getting used to the walking – so why was today so damn tough?

Gil willed me on. I plugged in some music and let the riffs of Gary Clark Jr, the lyrics of Nina Simone and the compositions of Mike Oldfield take me away. I desperately tried to escape from the pain in my body.

We started on an up that never ended. I kept stopping every 20 metres. My emotions felt so fragile that I couldn’t stop myself crying in frustration. I could see Gil was really struggling today as well. 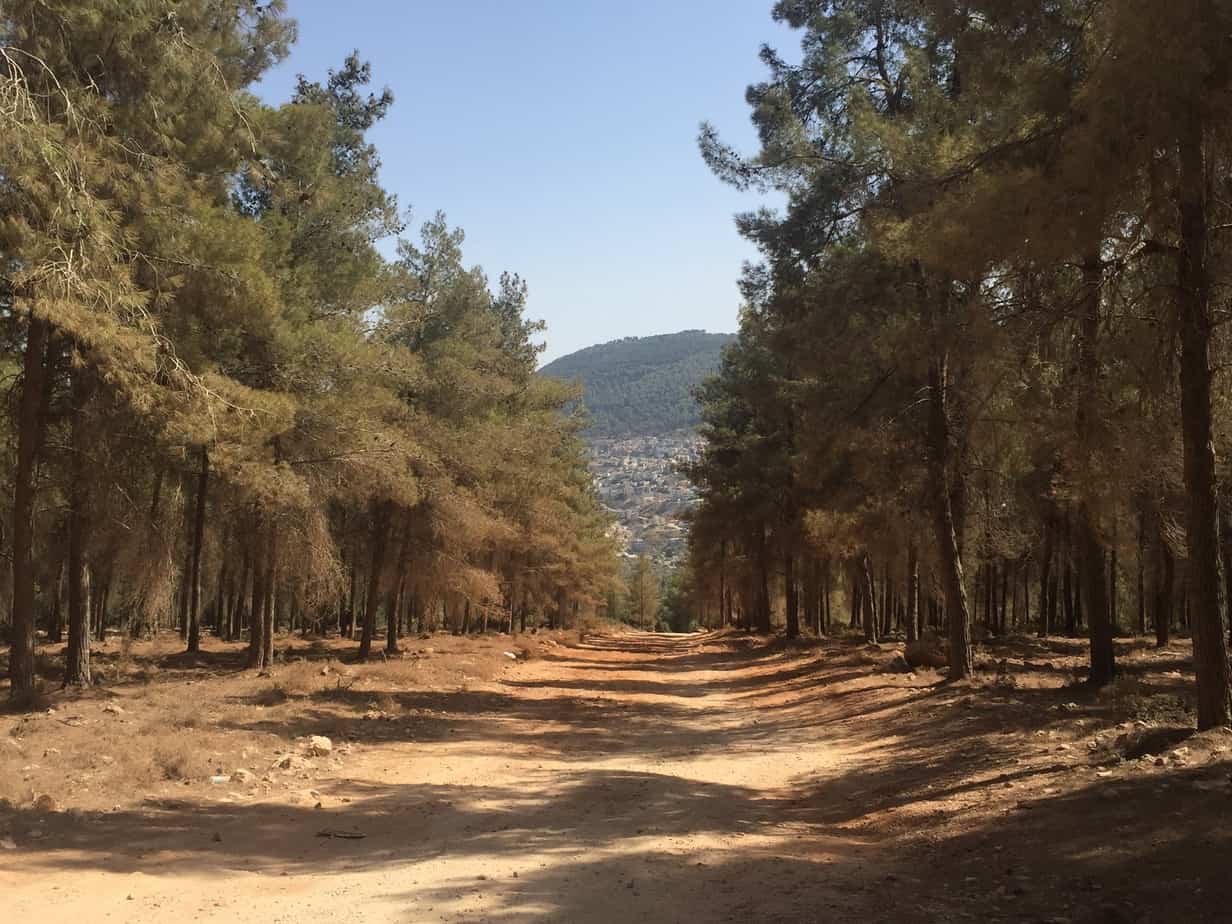 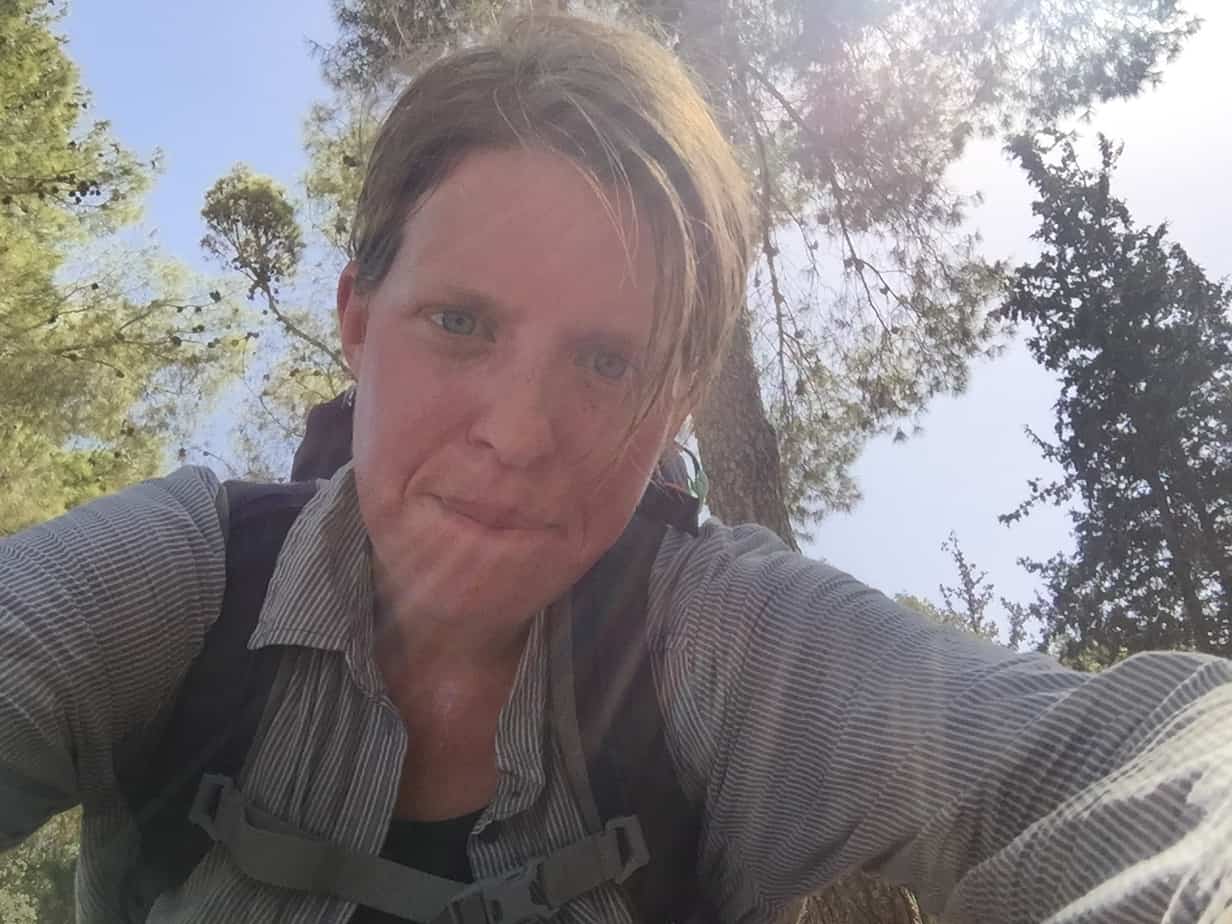 We made it to the top, just. Then we came down. Then, what a surprise, we had another tough climb up to get to the end point and a supermarket.

This section was horrible, steep and through dry dead thorns that pierced my legs. I’ve never felt as broken as I did when I reached the top. I honestly didn’t think I was going to make it. We crossed the road to a supermarket to buy food (cheese and potato borakas, tomatos and chocolate) and water, which we consumed in minutes, and hiked to a wooded area over the road. 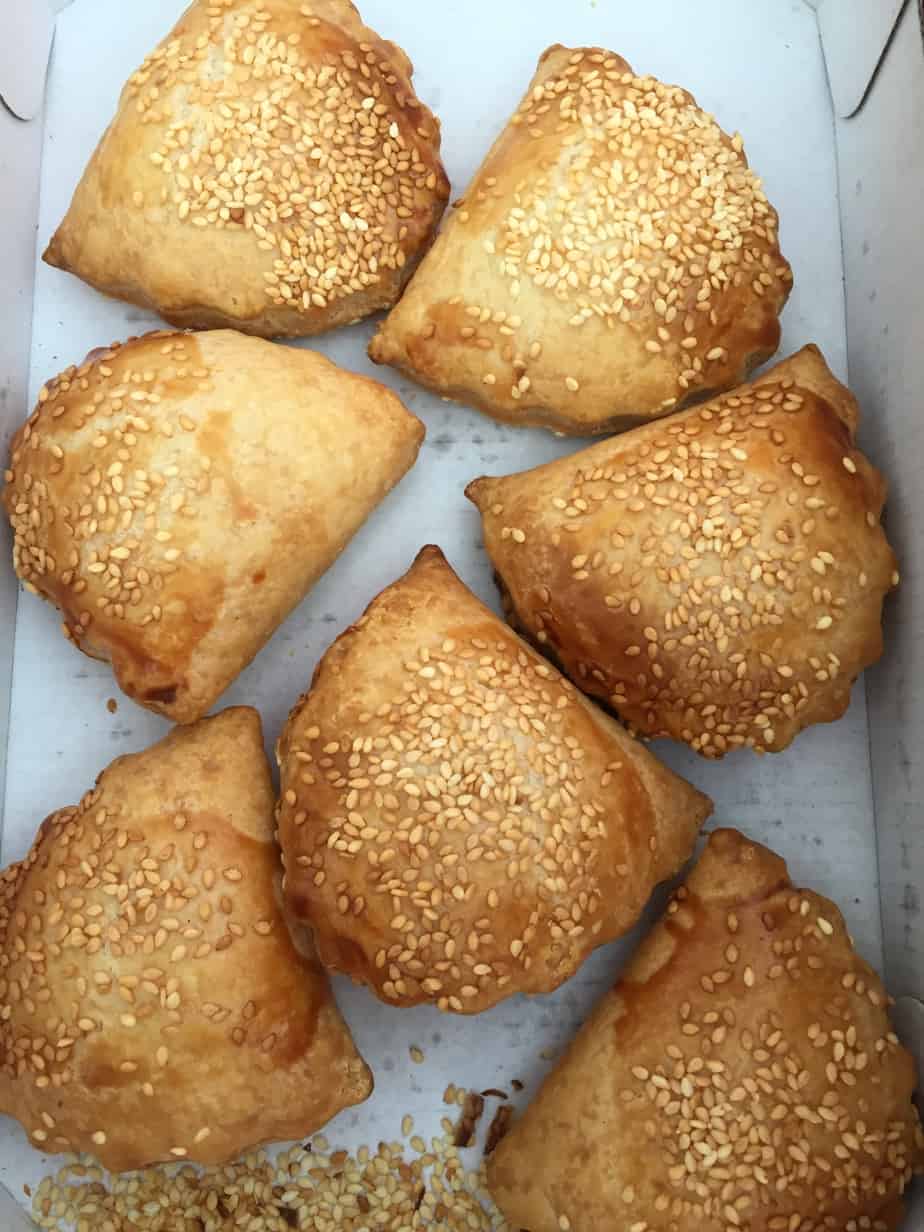 It wasn’t an ideal place to camp but I didn’t have an ounce left in me and it was slowly getting dark. Physically and mentally, this was the most exhausting day of my life. 25km and over 1200 metres climbed all in 32 degree heat. I just couldn’t handle it today.

Gil and I been together for 6 years, to the day. We made a few feeble jokes about this being the best anniversary ever. I think we both fell asleep mid conversation. 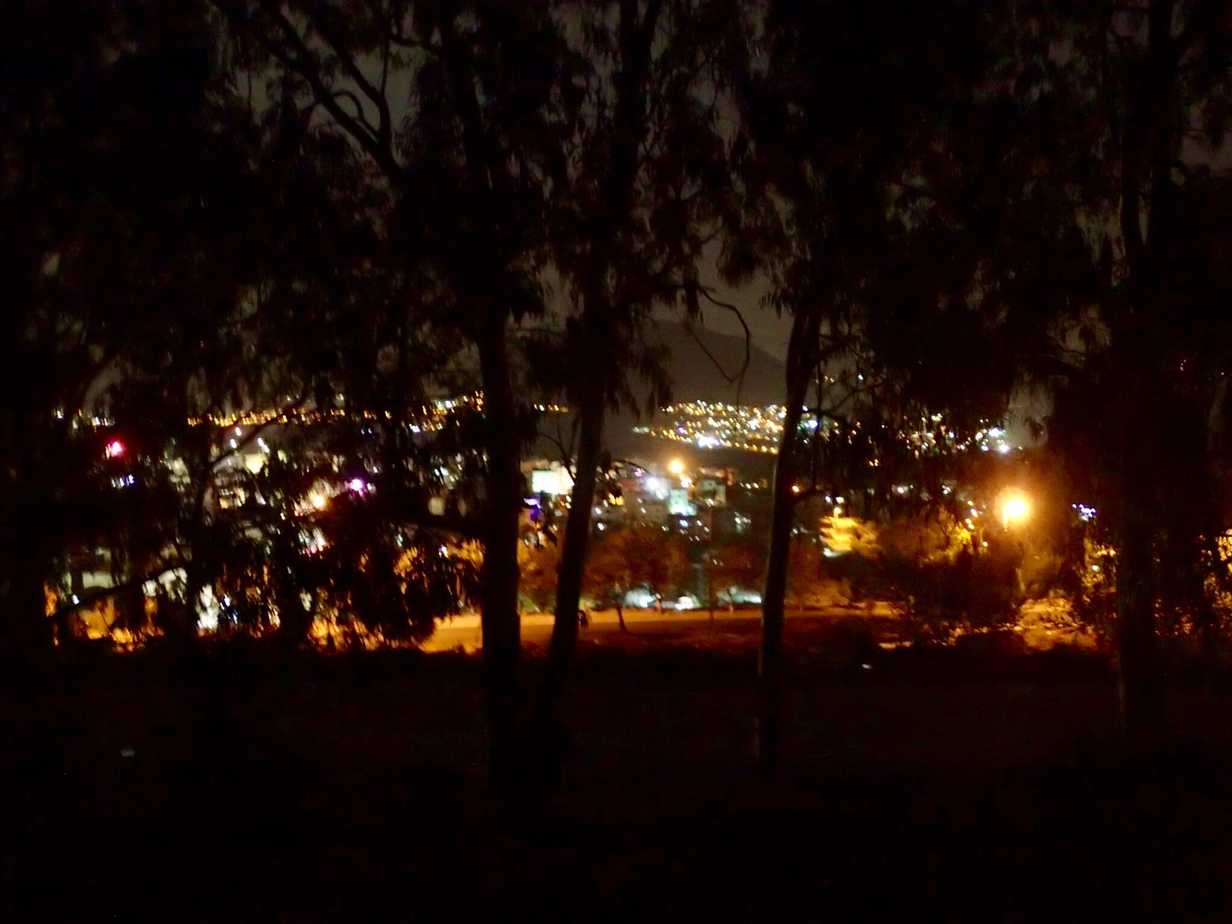 After such a difficult day I was dreading the alarm going off. We packed in silence. Joining the trail again, we headed through an Arab town. Coming from London it is a strange concept to me that towns might be split depending on religion, but, that is how it is here. The Jewish and Arab towns look different. The Arab towns more Middle East – the buildings higher, the streets less organised. The bakery smelt really good, the side streets smelt really bad. There were stray cats wandering everywhere. It was 5am and the people were leaving the mosque. Most of the men returned our ‘alan’s’ (hi’s), most of the women didn’t. I can see that this is a very warm community but I don’t sense that we were welcome so I’m a little on edge. It’s probably all assumptions. I wonder if an Arab would feel the same in a Jewish town. Almost certainly. 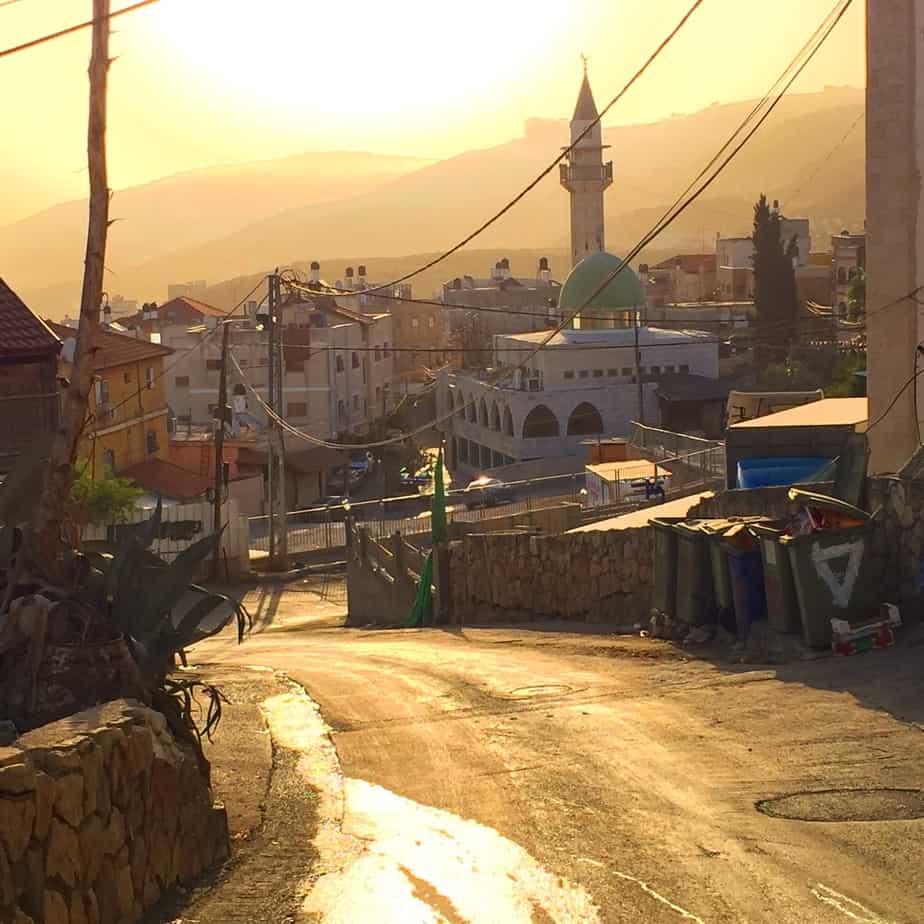 Out of town our instructions were simple, follow the red markers, which we did.

It took us about 40 minutes going down hill to realise this was completely the wrong direction and the only way to get back was up the steep hill we had come. Apparently the markers were orange… 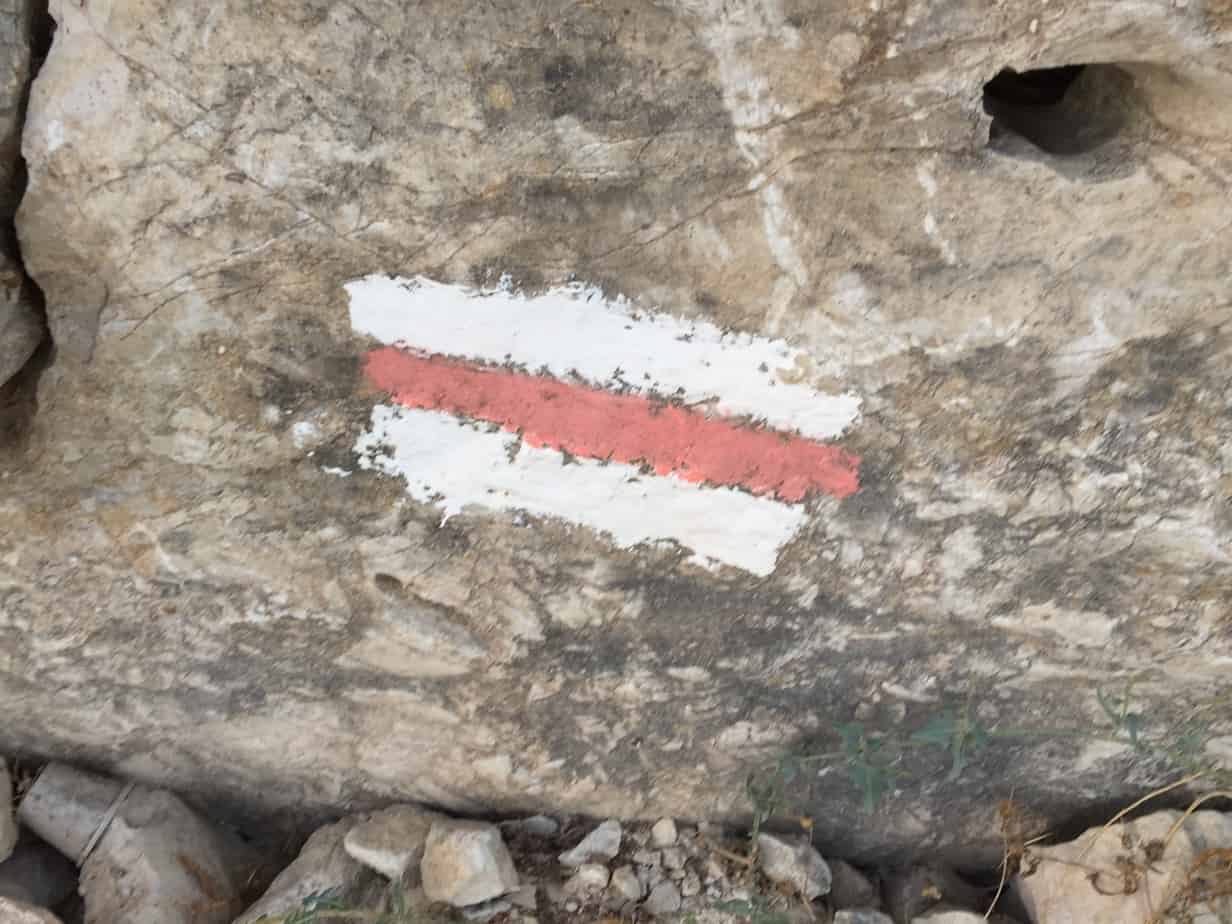 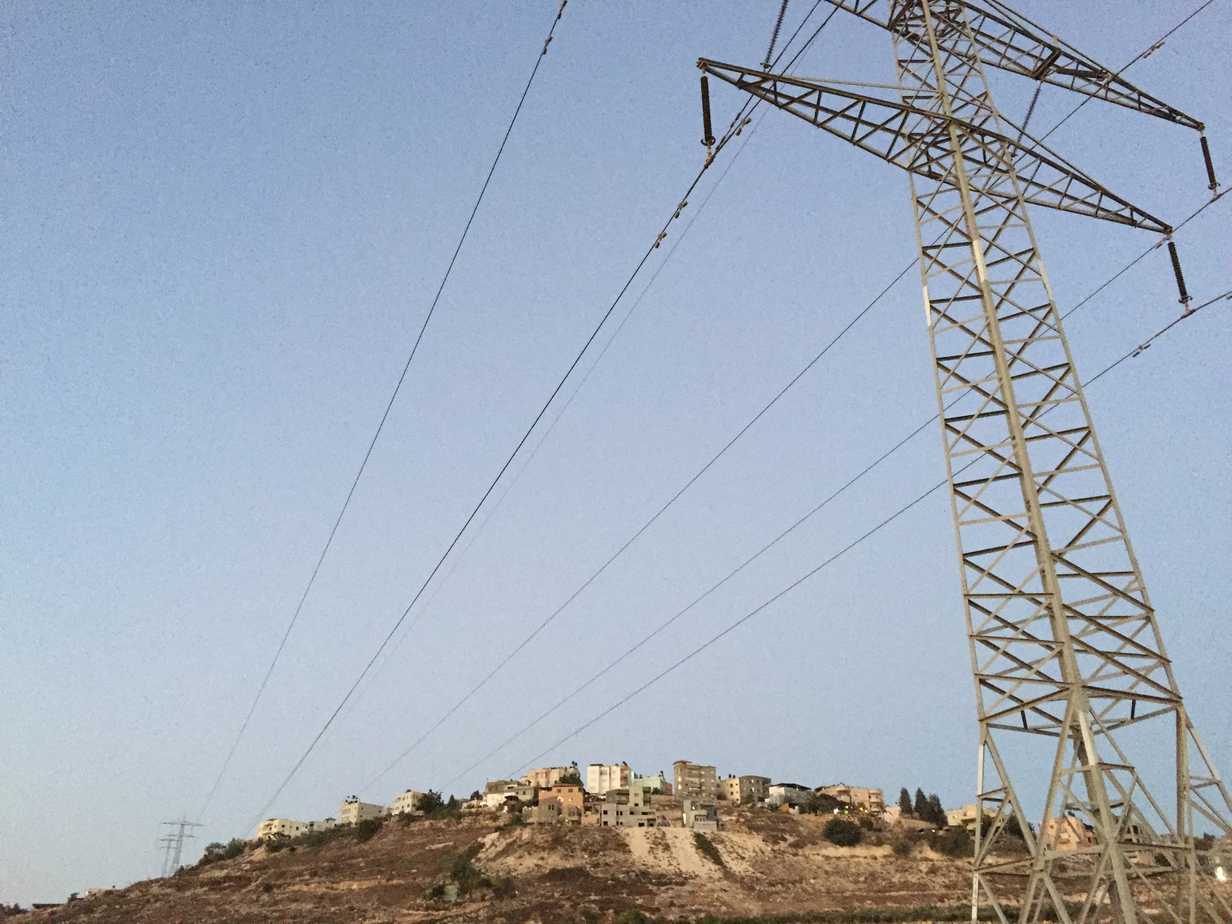 This error meant that by the time we were back on track we had only covered 5km in almost 3 hours of hiking. This mistake couldn’t have come at a worse time. I dropped my bag and told Gil I’m quitting. I ranted about all my frustrations, all the challenges, how much easier this would have been if we had done a more established trail where there would be people to meet and better camping options. I’m just not fit enough. It’s too hot.

I so wanted to quit.

I knew I couldn’t. I just can’t bring myself to stop sometimes. I’m so intensely driven. Sometimes it’s a good thing and sometimes it’s a bad thing. Deep down I knew that not quitting this was a good thing. I wiped my eyes, threw on my pack and hiked on. I forced myself to think of 10 positive things…positivity can get you through anything.

Later on we bumped into Tal who was now walking with 2 friends, Noa and Ayelet. The company helped cheer me up as we made our way through some nice wooded areas. The last 8km of the day took us to Kabiya, another Arab town, with such friendly people who all waved and nodded as we passed. It had a completely different atmosphere. The downside of being in a group is that the pace is slower and I was getting worried about it getting dark so we split up from the girls around 4pm to hike ahead. 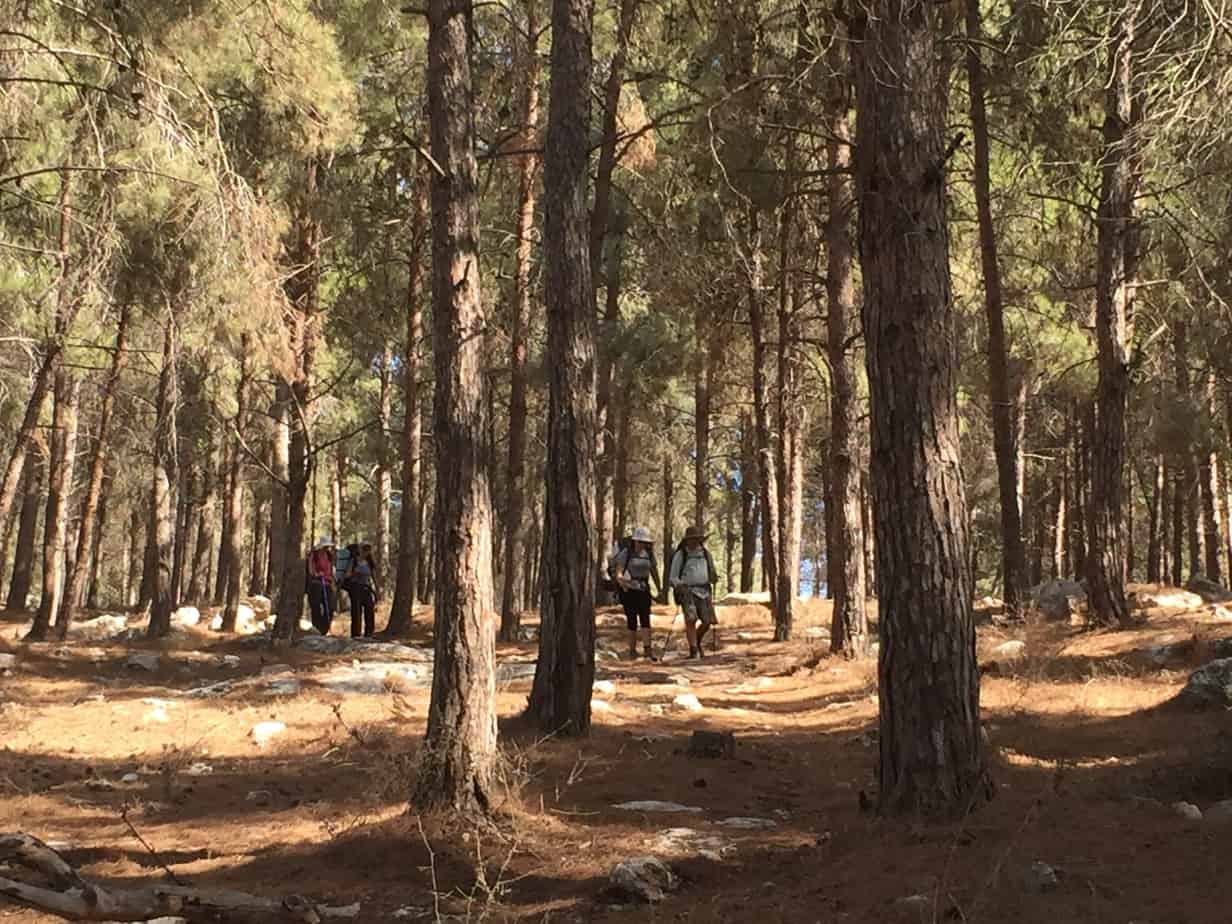 We had planned to camp on the outskirts of town but when we got there motorbikes, scooters, quad bikes, dune buggies and tractors were all whizzing about doing donuts and playing loud music from their speakers. Not ideal! 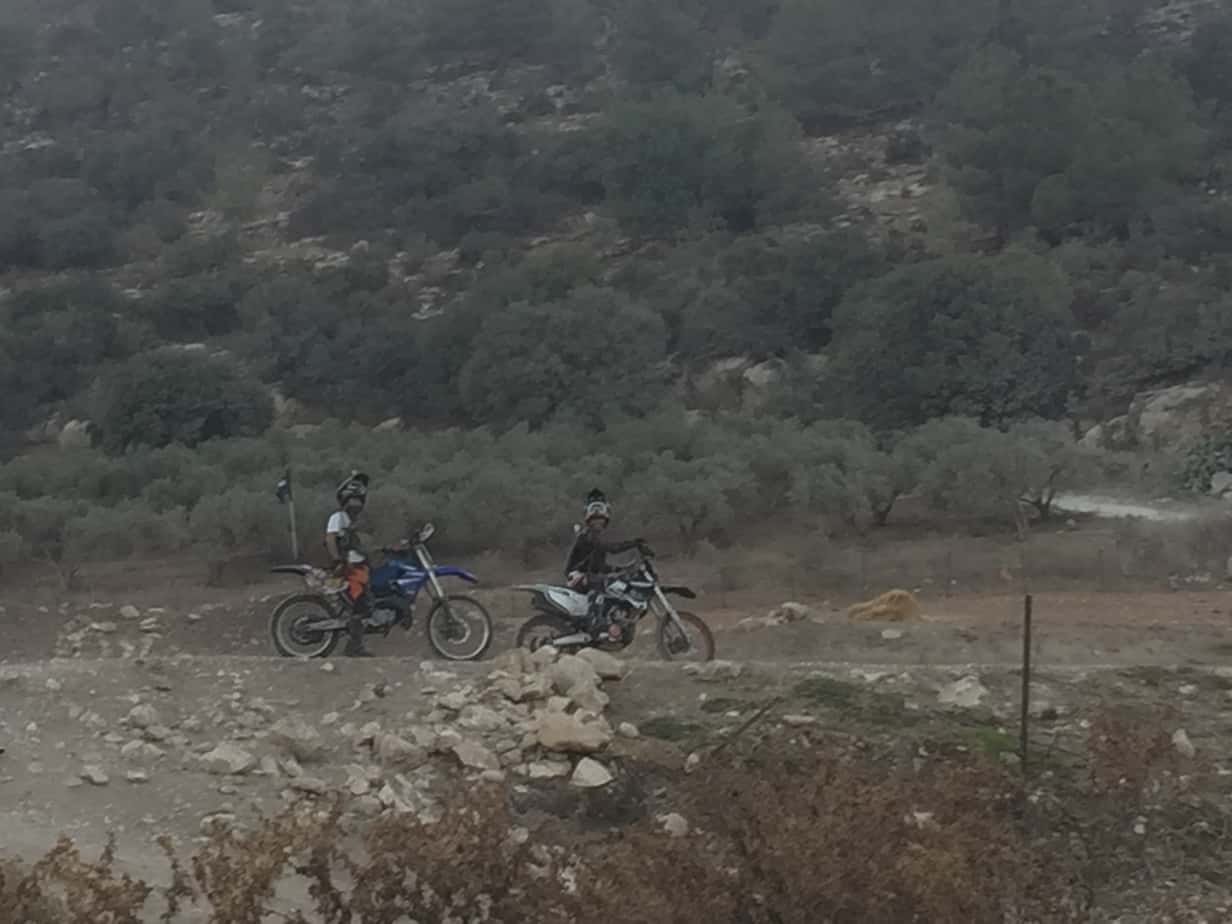 We had no choice but to push on for another 3km when, eventually, just as the last of the light was fading we found a flat spot by some trees. It was a bit exposed and on an ants nest but it would do.

With us getting lost and struggling to find a camp spot, we’ve walked over 30km today. As I get myself ready for bed, I find myself in good spirits. Despite the trauma of yesterday and getting lost this morning, my optimistic approach to the afternoon, plus the company, has helped put me in a different state of mind. It can’t get any worse than it has been these 2 days so, as my Grandfather would say, the only way is up.