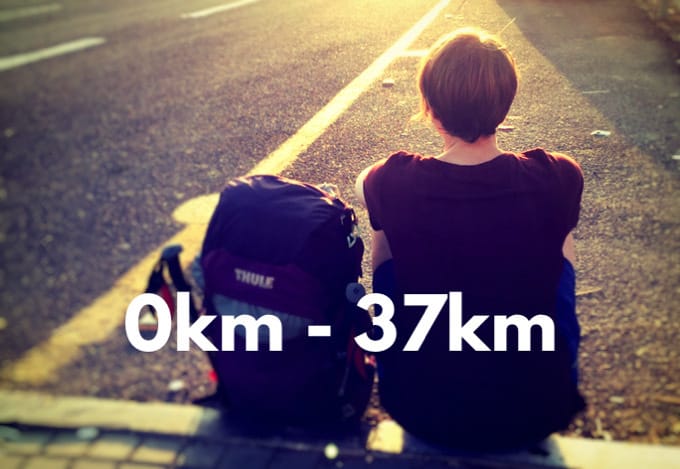 The bus was full of young Israeli soldiers who were all returning to work after the Rosh Hashana (Jewish new Year) holiday. We managed to grab the last 2 seats at the back. It was a quick 3 hour journey, with only 1 change, to go from Gils hometown, Zichron Yaakov, to Dan, the start the Israel National Trail. 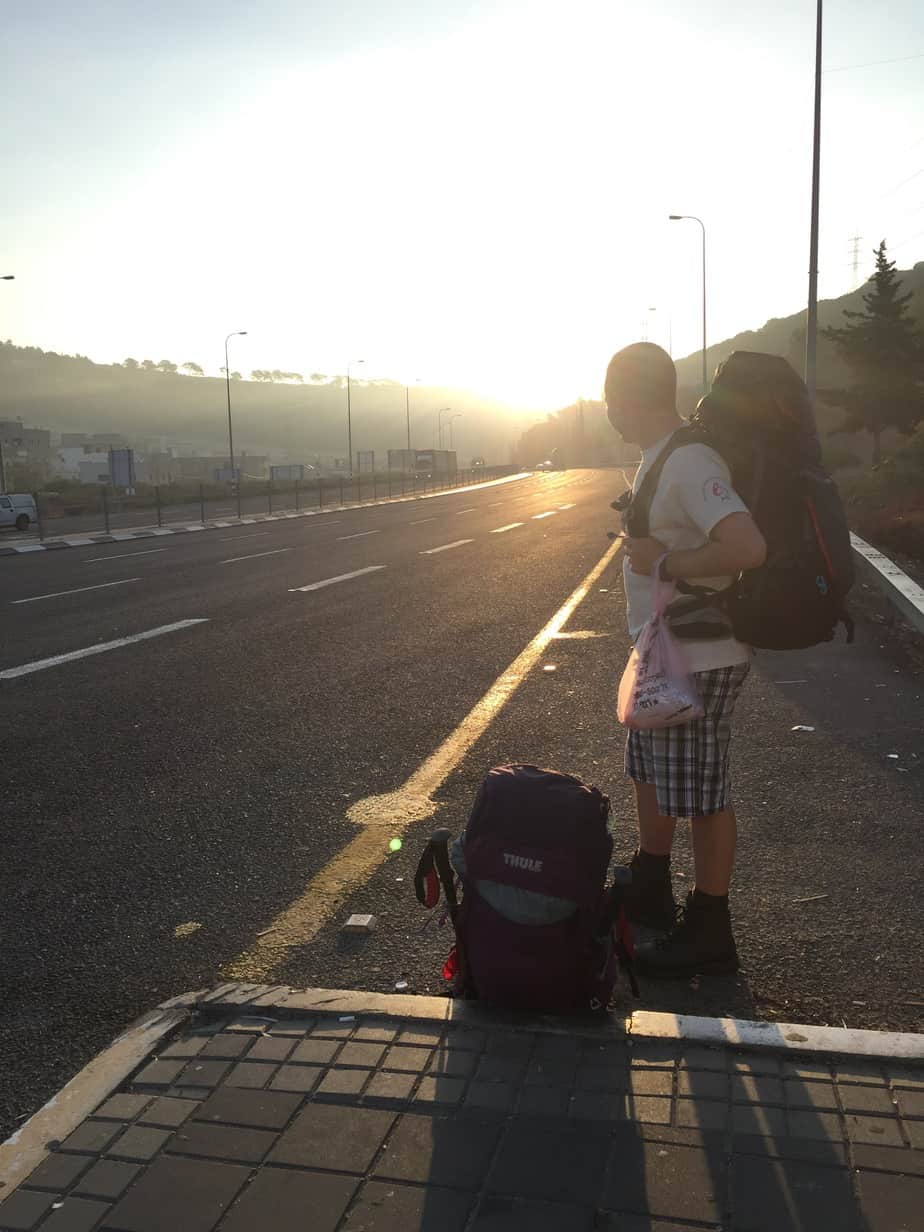 By the time we reached Dan, the bus had picked up 3 other hikers – a father and son, who were doing a 3 day trek, and a young guy, also called Gil who had a humongous shiny new backpack on. He was also planning to hike all the way to Eilat and was radiating the kind of excitement that only a first time adventure can bring.

We hiked to the end of the road and turned right onto the trail. Starting such an epic adventure felt like it deserved a memorable start, something other than being spat out of a bus onto a main road, but, that was how it began. I couldn’t believe I was finally here. I couldn’t believe I was going to walk 1000km. Could I really do it…this clumsy unfit girl from Basingstoke?

I had been thinking of hiking the Israel National Trail for about a year now, but had only properly commited to making it happen a few months ago. I had never done anything like this before and certainly not in desert conditions, so I was naturally a bit apprehensive. Surprisingly, there was very little to organise for the trek apart from booking flights and buying equipment. We had decided to do the walk in aid of Africa’s Children in Education so most of my time had been taken up with fundraising and trying to get people to kindly sponsor us

It was 11am, the worst time to be starting a trek as the hottest time of the day (12-3), was soon to set in. Because of the holidays though, we were starting a day later than originally planned so we couldn’t afford to wait any longer. We didn’t want to make our schedule any tighter than it already was. 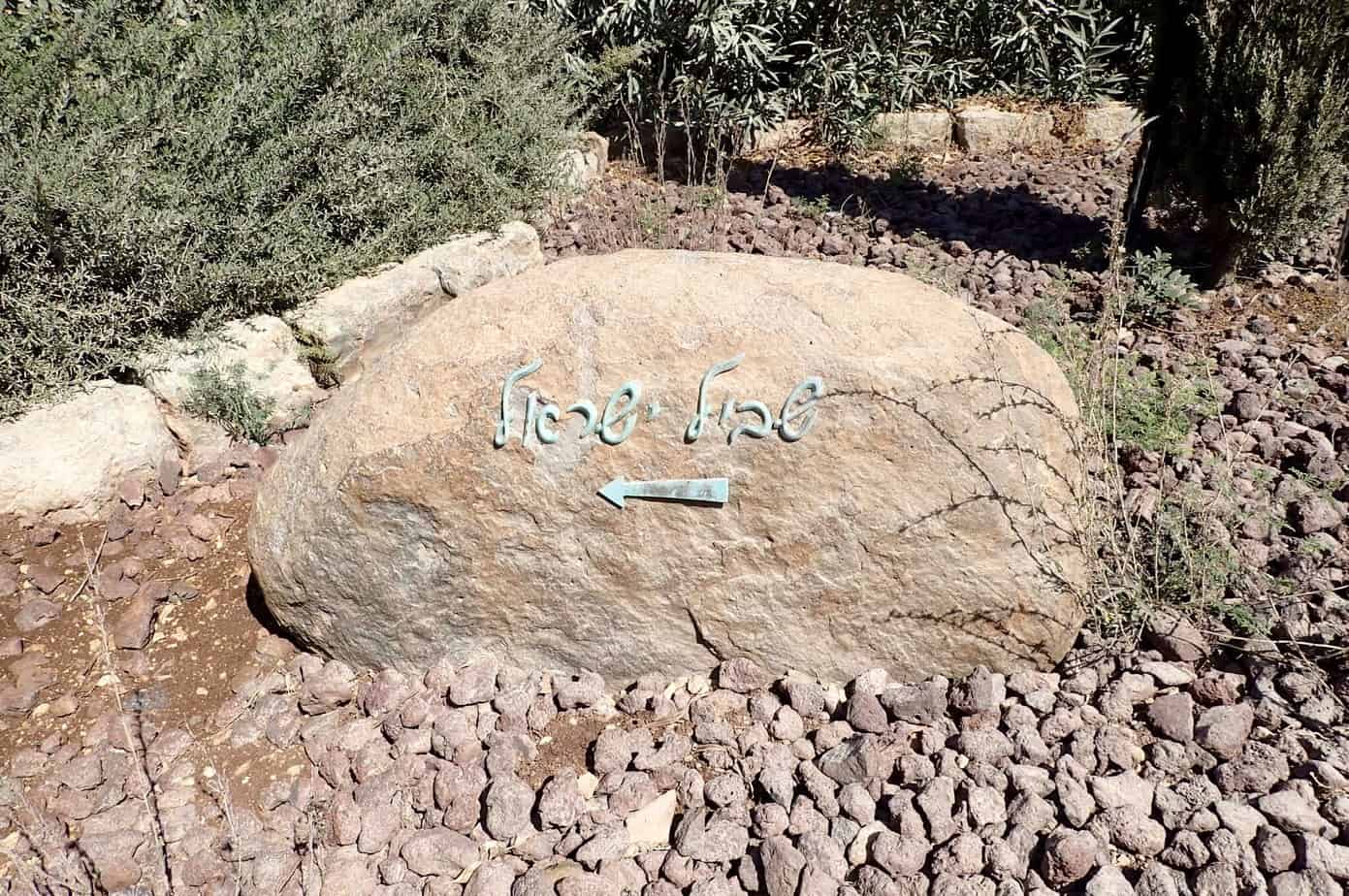 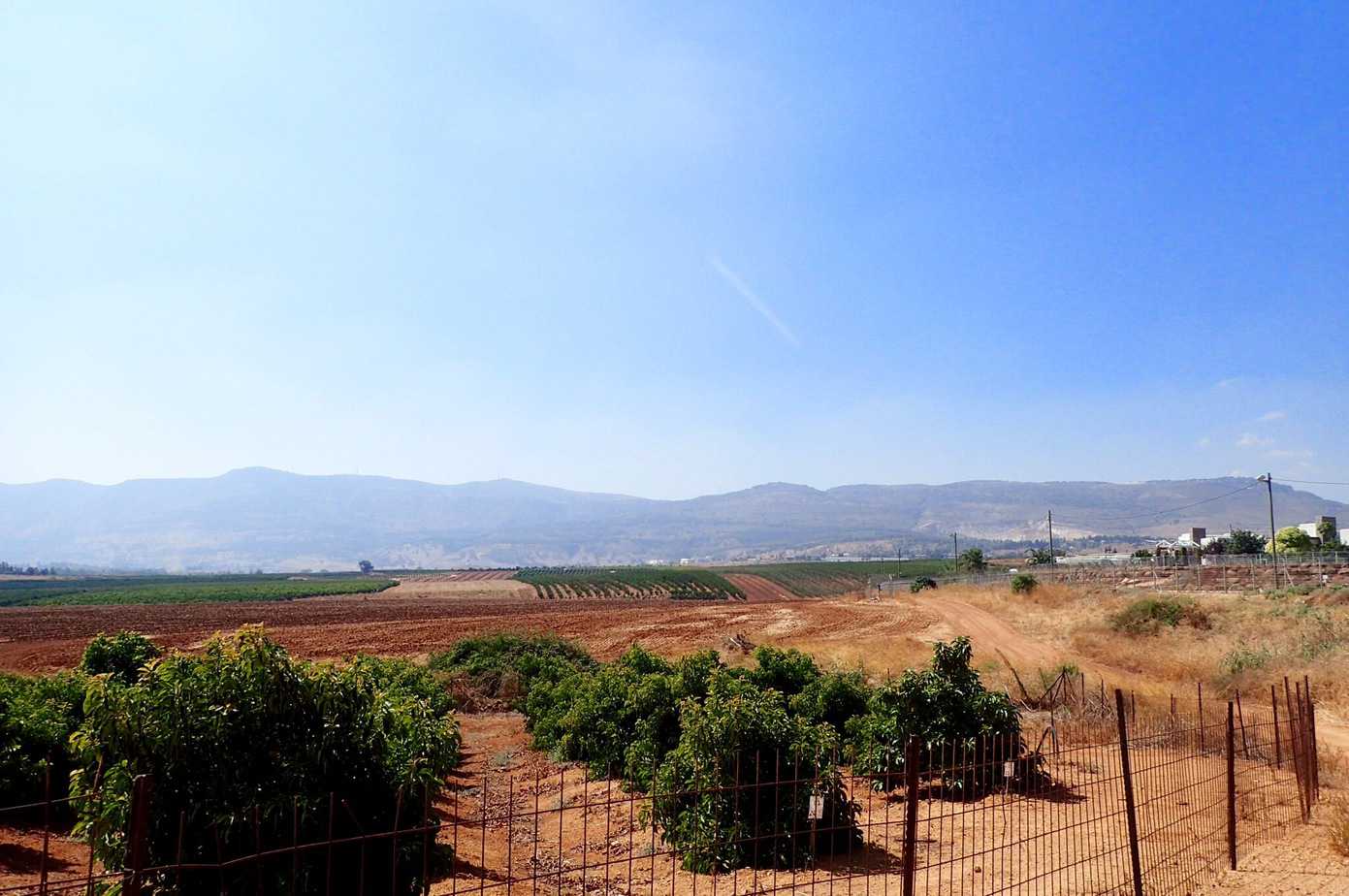 As I continued on along the dry dusty track, my walking felt uneasy and my pack just didn’t fit right on my back. It was so heavy. My skin and throat were sore from the dust. Every movement felt unnatural. The worst part though was the heat – the hot dry relentless heat that was already well into the 30’s (this is autumn time in Israel in case you are wondering). My hat and shirt, which protected me from the sun, made me feel like I was cooking in an oven. I was dripping with sweat and felt disgusting in minutes. I was literally melting.

I’m not used to this kind of heat. It was tough but I pushed on. I knew, like with anything, there would be an adjustment phase. 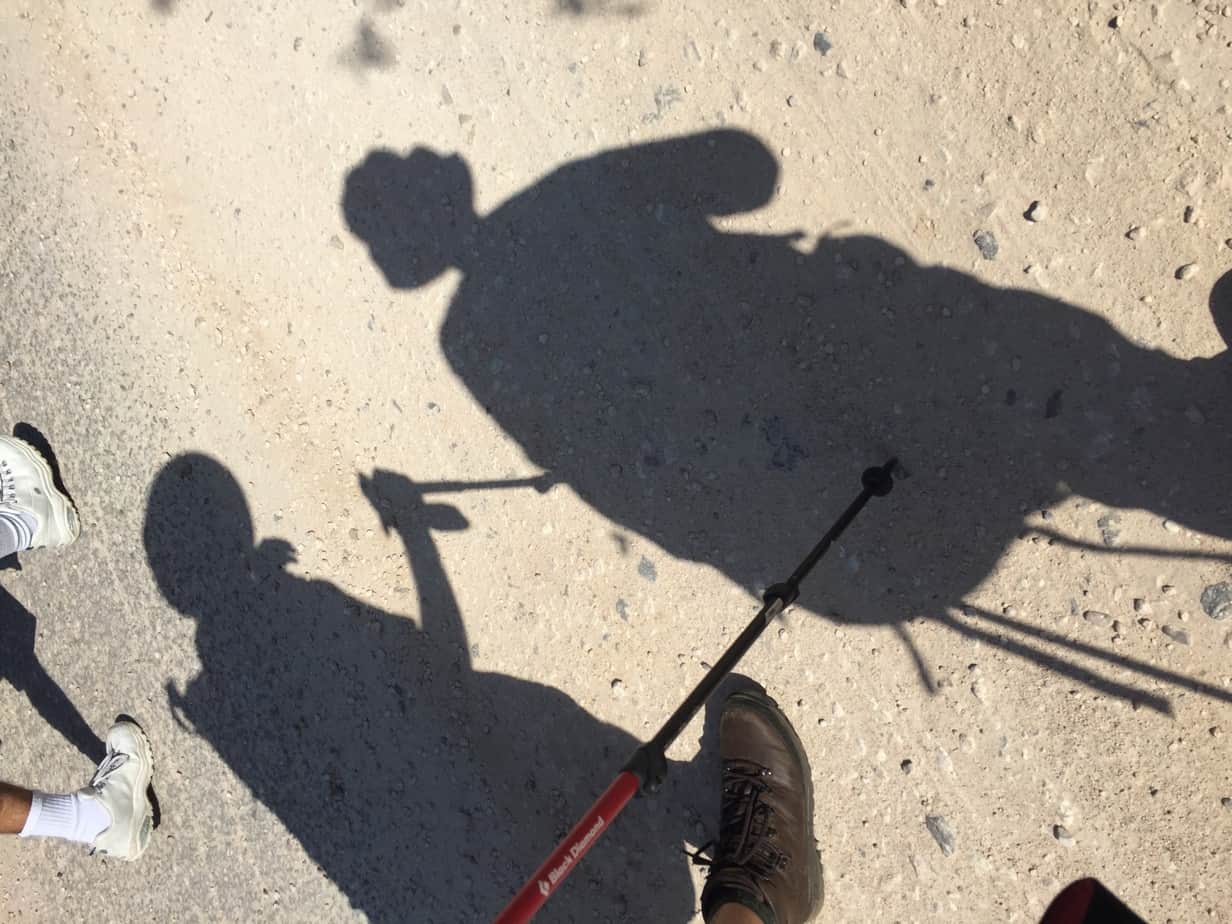 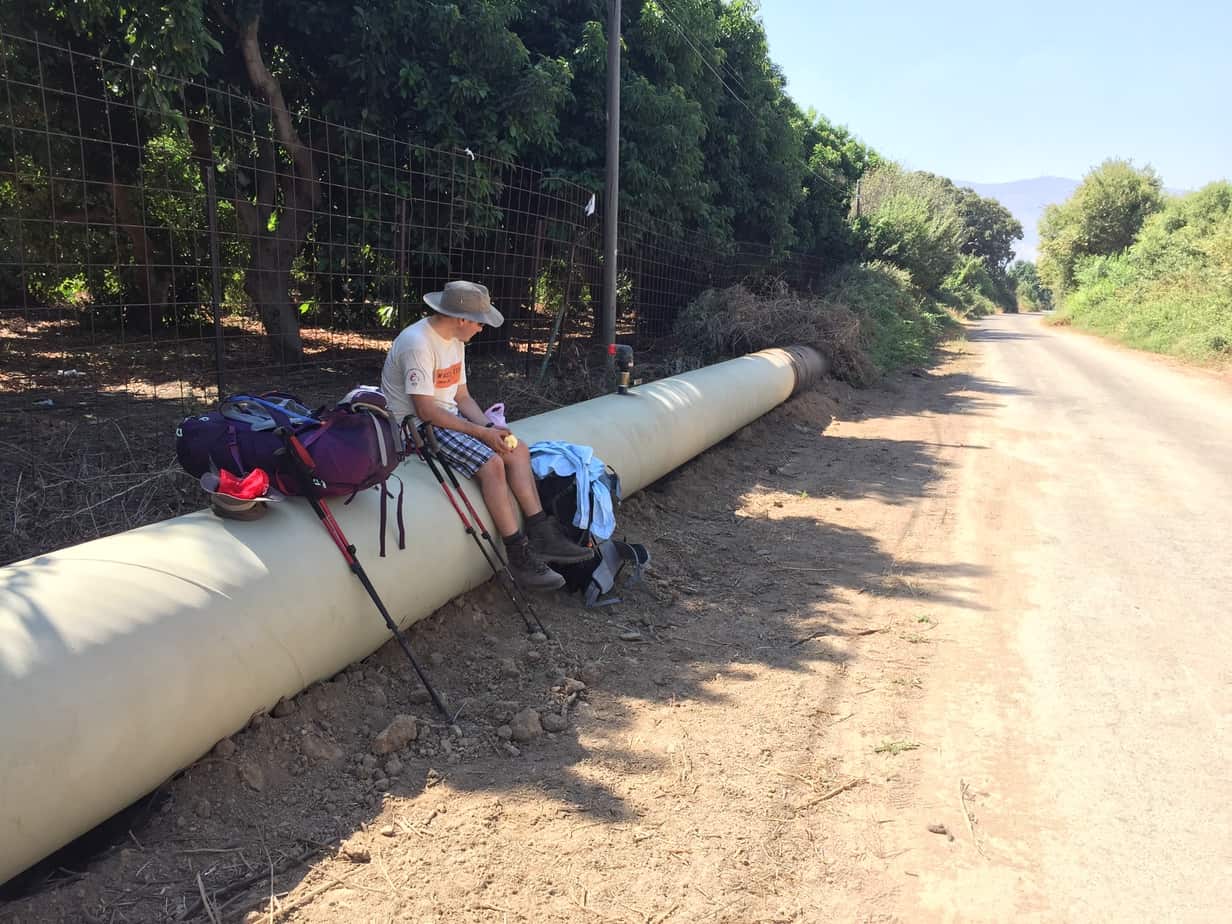 2 hours in and we stopped to eat lunch – Autie Yaeli had made us mushroom and leak pasties. So good! When we arrived at Kfar Giladi, 13km in, and I stopped for a rest, I was suddenly aware that my shoulders and neck were really tight. I think I had not distributed the weight properly in my bag and it was pulling my shoulders back too much. I had realised my mistake too late and, although I made some adjustments, the damage to my back had already been done. 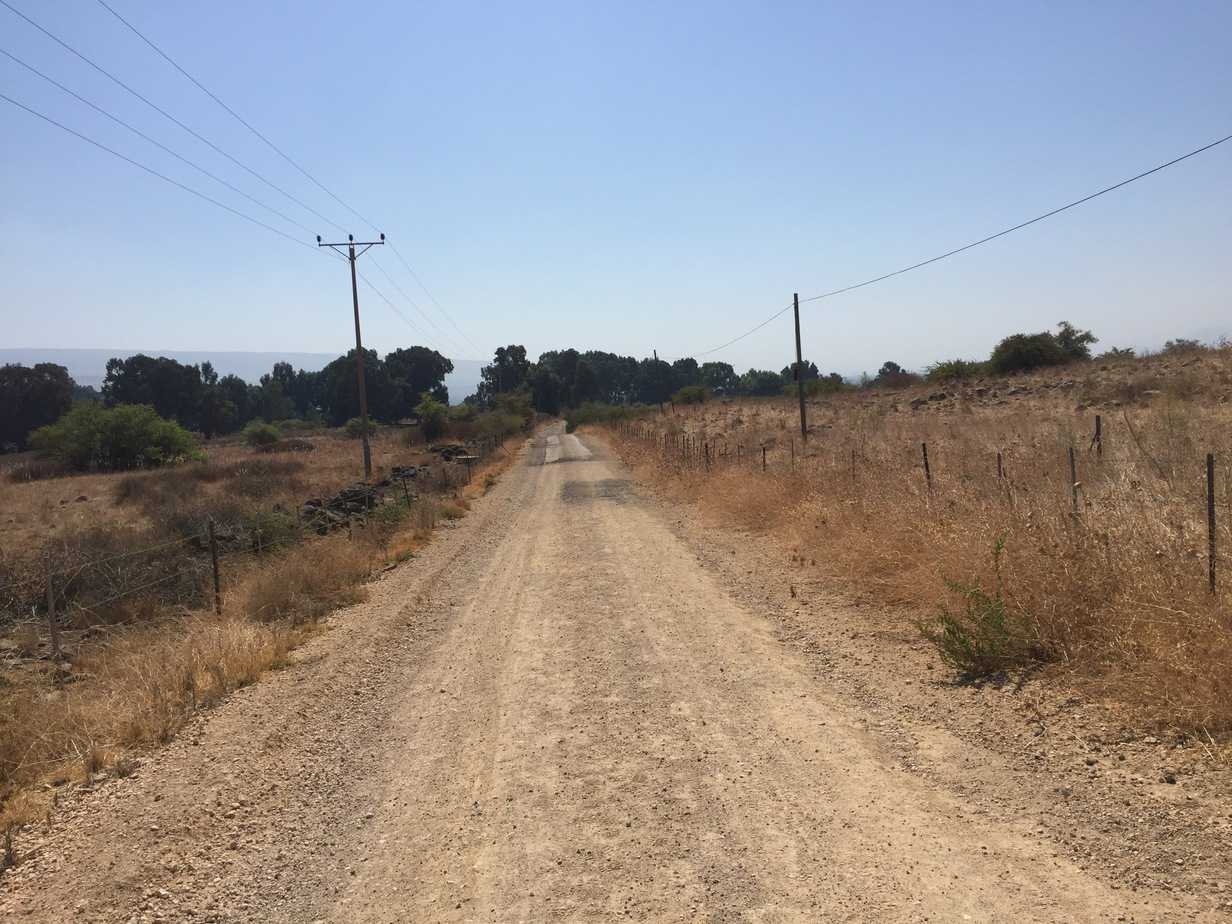 (Gil almost got head butted by a really huge bull. I’m always a bit scared of cows…it’s the way they stare at you, it’s creepy!) 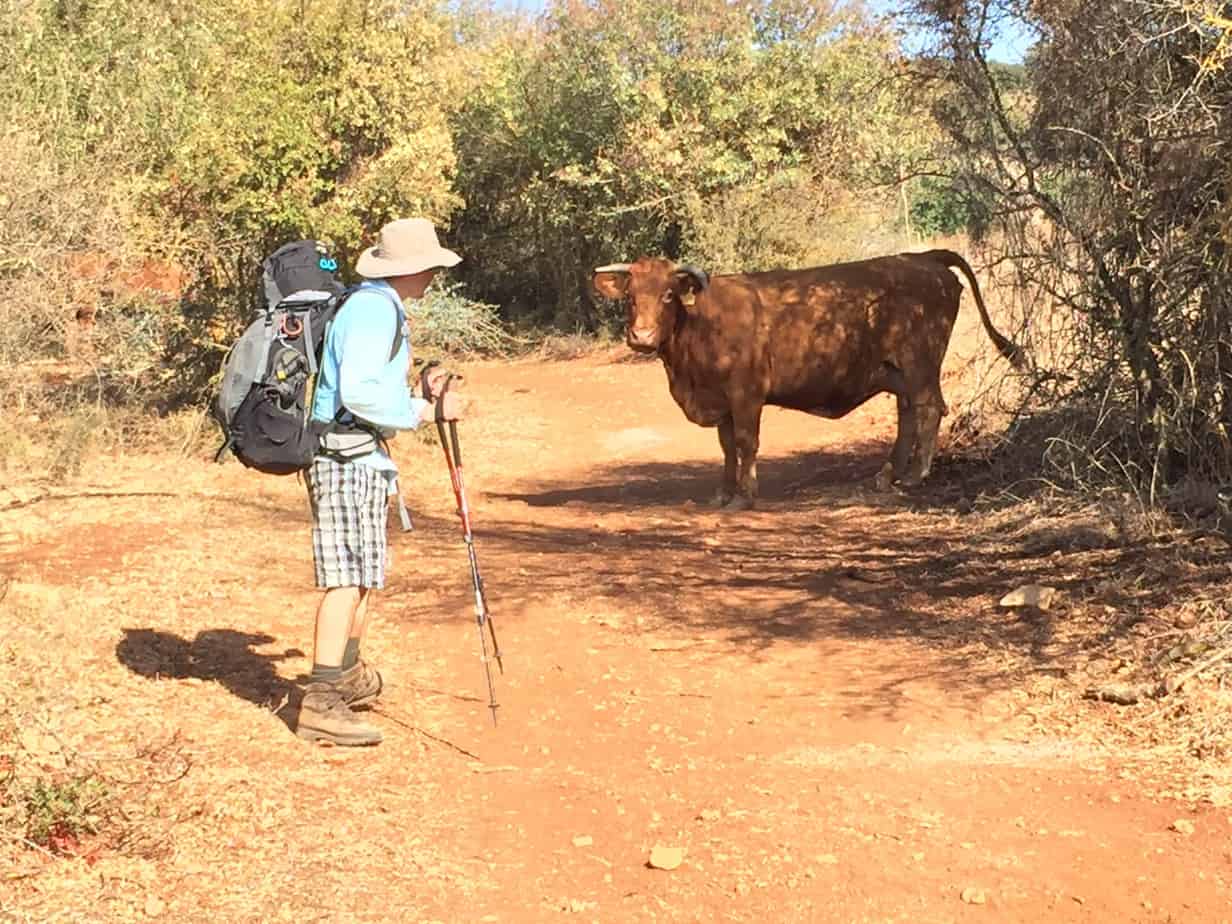 Although there were a few camping spots in town, we felt that we had enough energy for a few miles more so we carried on the trail and up into the mountain and the woods.

The sun started to get close to the horizon. When we saw a flat section on the edge of the trees, we took the opportunity and set up our tent. I could see the comforting lights of the town twinkling down below us as the light faded. By 7.30 it was dark. I thought about reading my book but suddenly felt really tired so closed my eyes and let sleep take me. 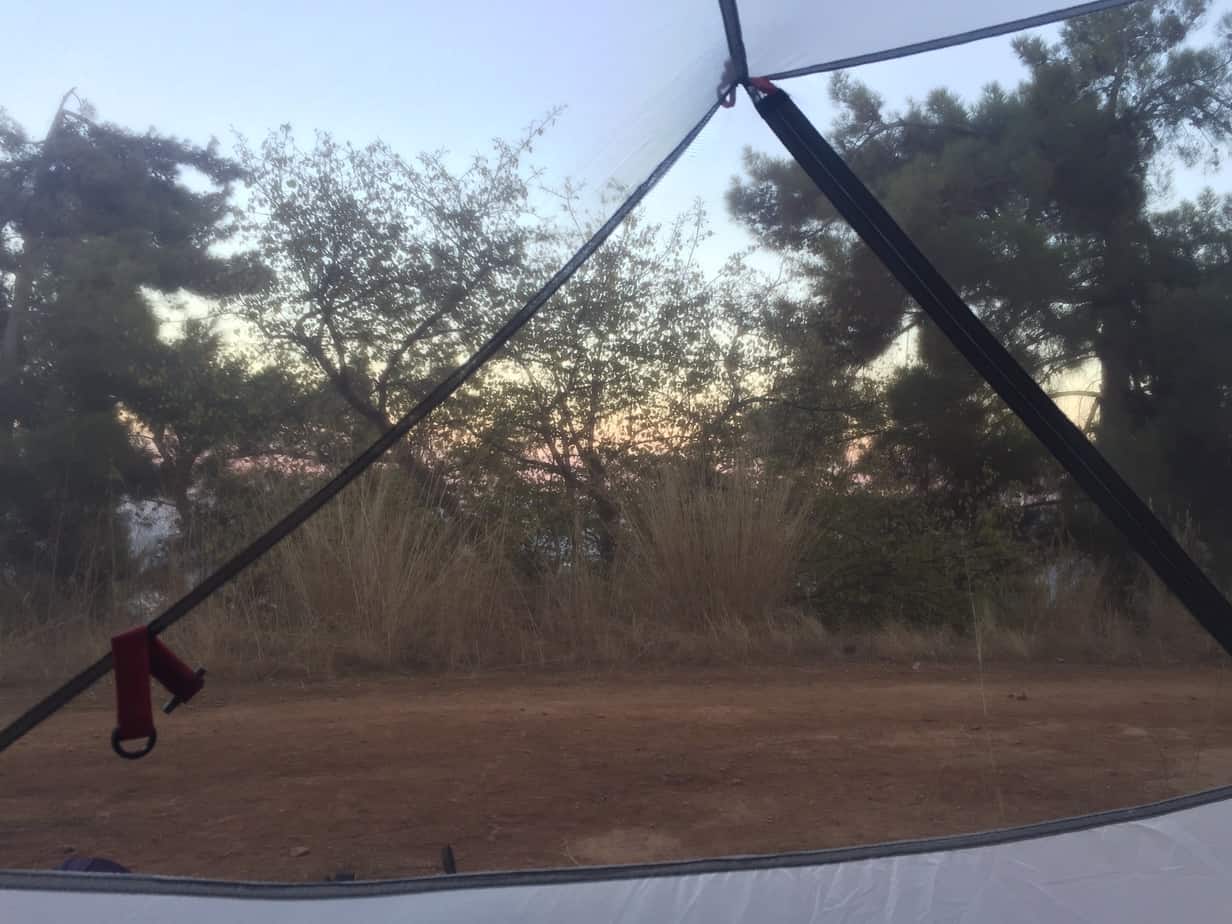 An hour later I woke when I turned over in my sleep. My shoulders and neck were so unbelievabley achy and sore. The tension from the muscles were sending shooting pains upwards and causing the most intense headache I had ever experienced. I tried every stretch I knew in an attempt to bring some relief, then massaged the area but nothing helped. I took some paracetamol and, shortly after, ibuprofen. After about 30 minutes of tossing and turning in discomfort, the pain killers kicked in, ebbed the pain and I was able to go back to sleep.

We had set the alarm for 5am. Both feeling exhausted from yesterday’s midday heat, our plan was to do as much walking as we could early on. I was pleased that the pain had gone in the morning and I was just left with very ache muscles around my shoulders. We set off into the dark with our head torches on. It was the perfect temperature for shorts and t-shirt – warm but with a gentle breeze. As we left the camp spot, the jackals started howling in chorus all around us. Then suddenly fell silent. Maybe they were sending us off with good wishes for the day.

We walked along the edge of the mountain and, as it slowly began to lighten, the outlines of houses and roads took shape below us. I imagined all the people still fast asleep in their beds and felt a humbled appreciation that I had the mountain and the rising sunset view as so many hadn’t even started their day yet. 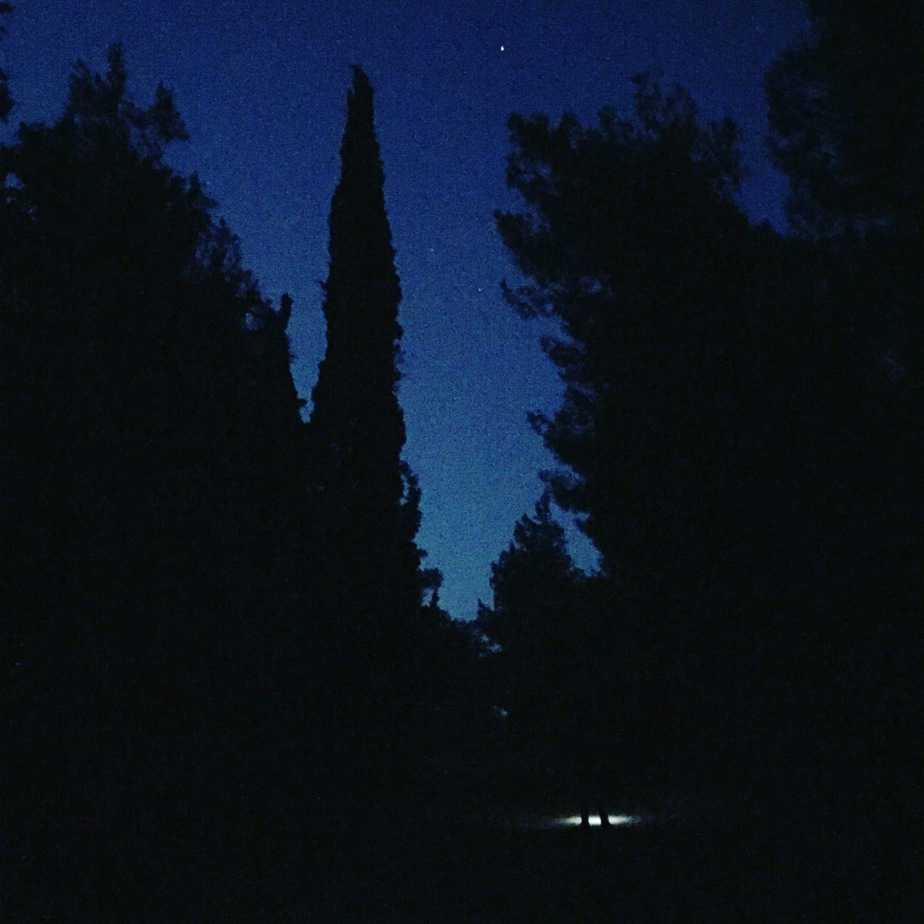 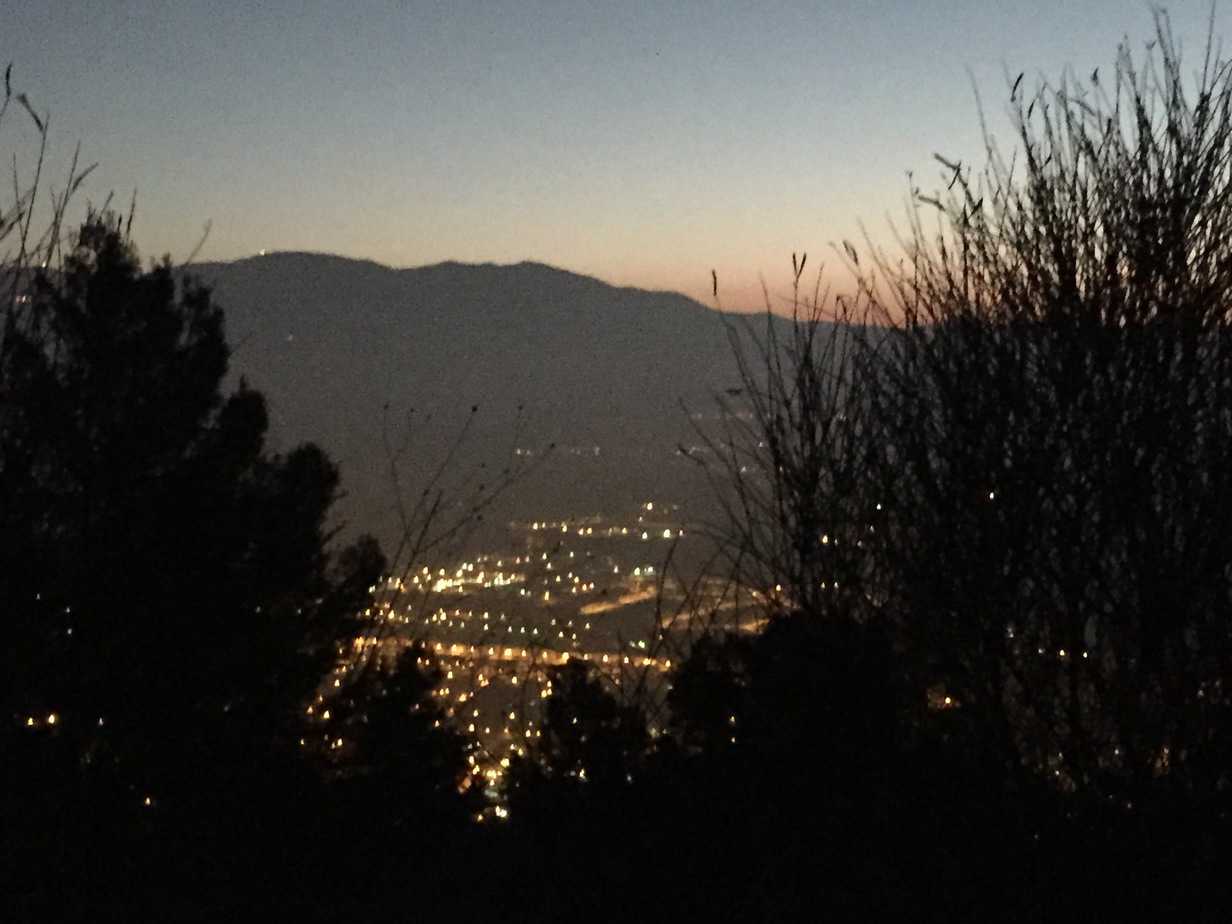 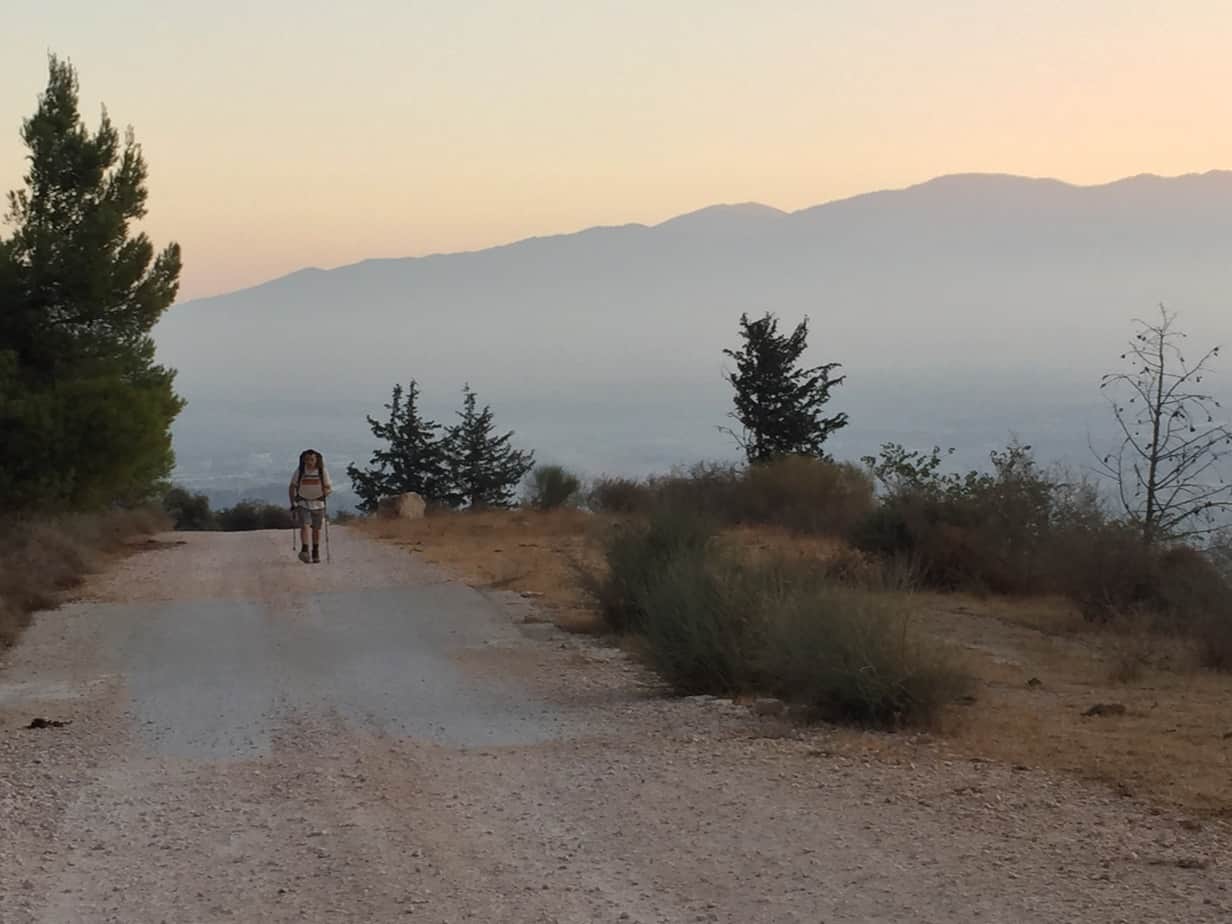 The cool weather from the morning meant we were able to make really good progress until we reached a section that involved a bit of scrambling over large rocks and boulders. 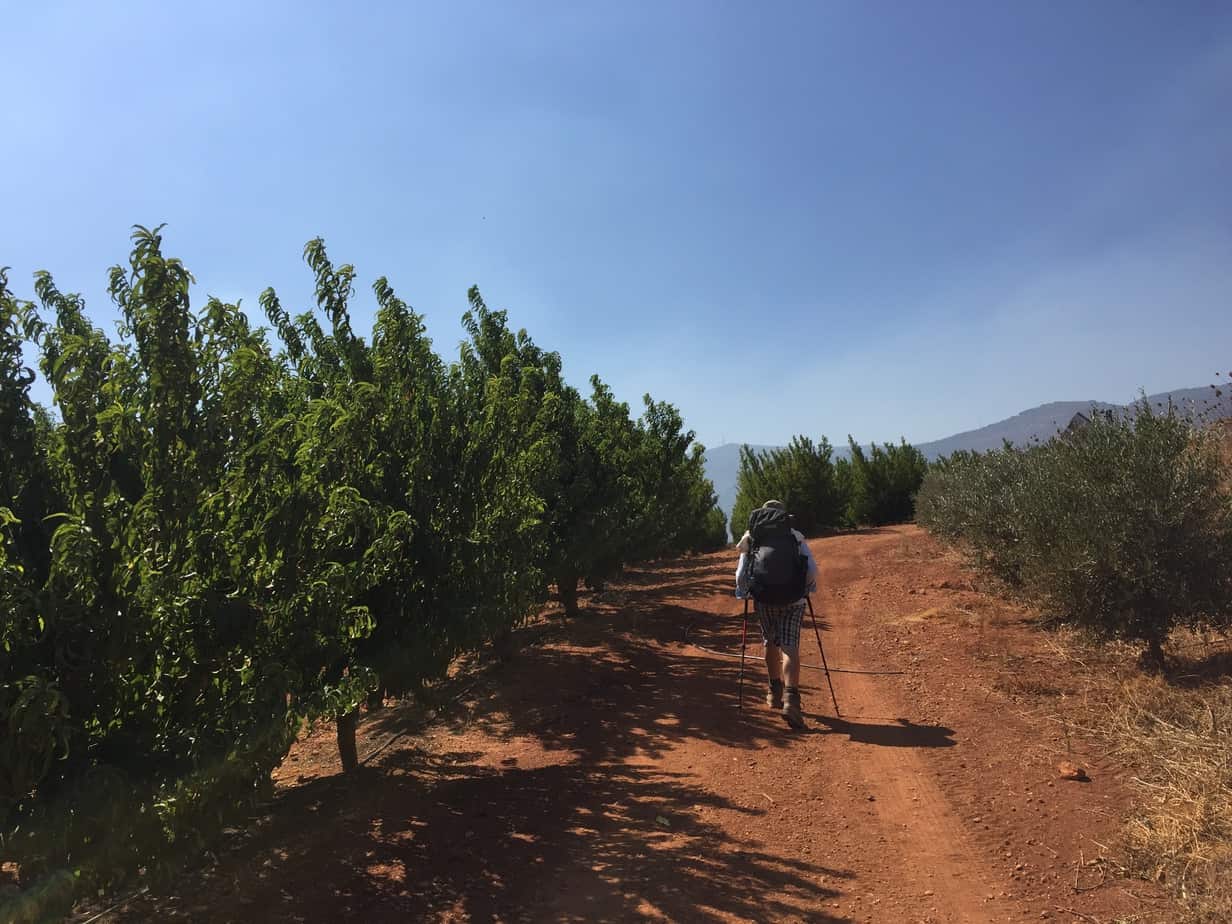 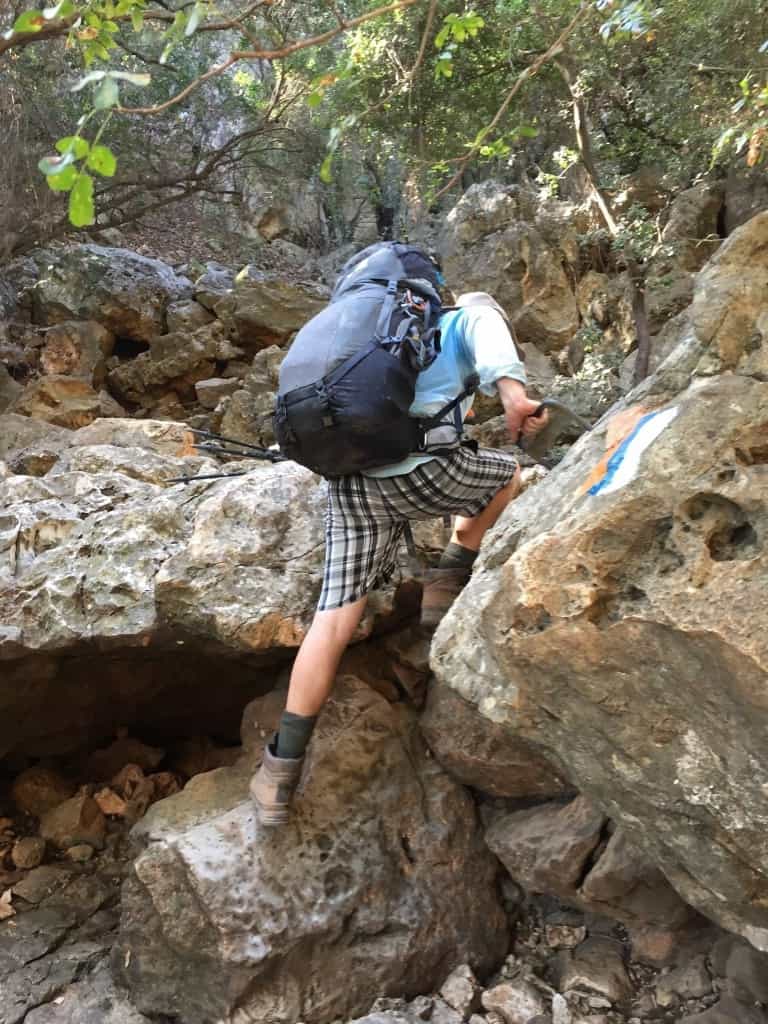 My increased sweating told me it was getting hot. We made a detour to a nearby town where we brought some lunch (bread, hummus, avocado, tomatoes and cucumber) to enjoy in the shade of a nearby park. We decided to stay here until 2.30pm to avoid most of the day’s heat. 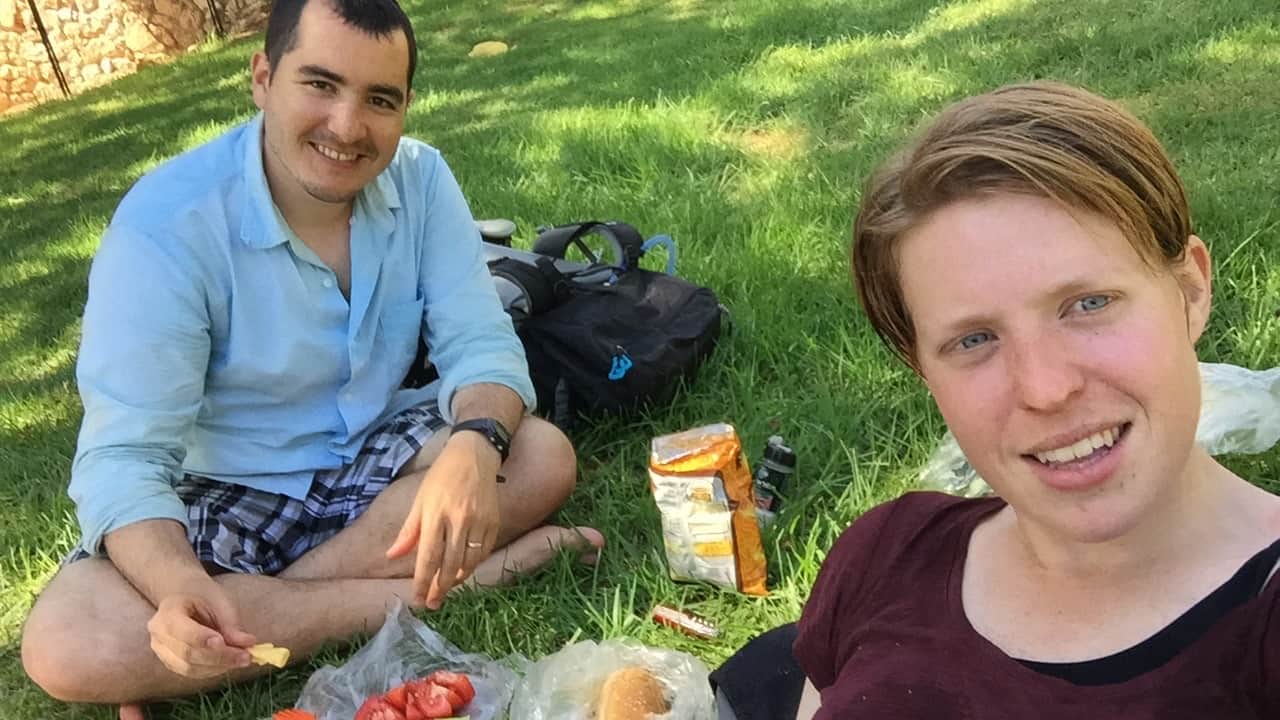 Gil fell asleep and, when he got up, was complaining he was feeling sick. As we tried to leave we didn’t even make it out of the park before he had to be sick…a lot. After more rest and a rehydration sachet, he said he was feeling better, but we only managed about 3km more before he said he needed to rest. 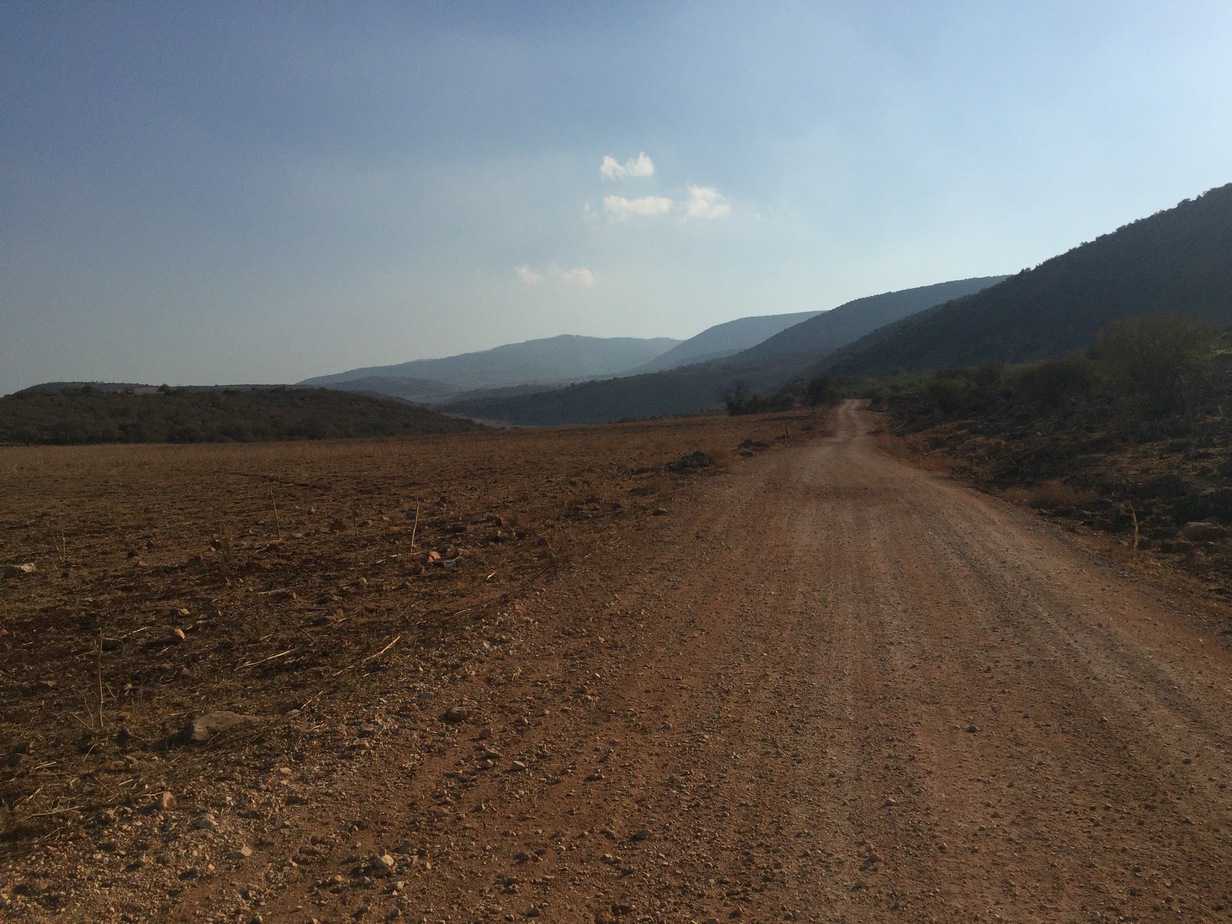 I found the nearest suitable camping spot – a flat area just off the path that backed onto a fence. It wasn’t the best but it would do. Suddenly a helicopter came in to view flying really low, it flew right over our heads and landed….20 metres from us! I don’t think they had seen us.

The dust kicked up like crazy. It was so noisy and windy and, as we only had the fly sheet on, it went everywhere. After a long minute, it took off, hovered for about 10 more minutes and, eventually, left. It was cool to see but it took me forever to shake the dust off all our stuff and if I felt dirty before, I was on a whole different level now. 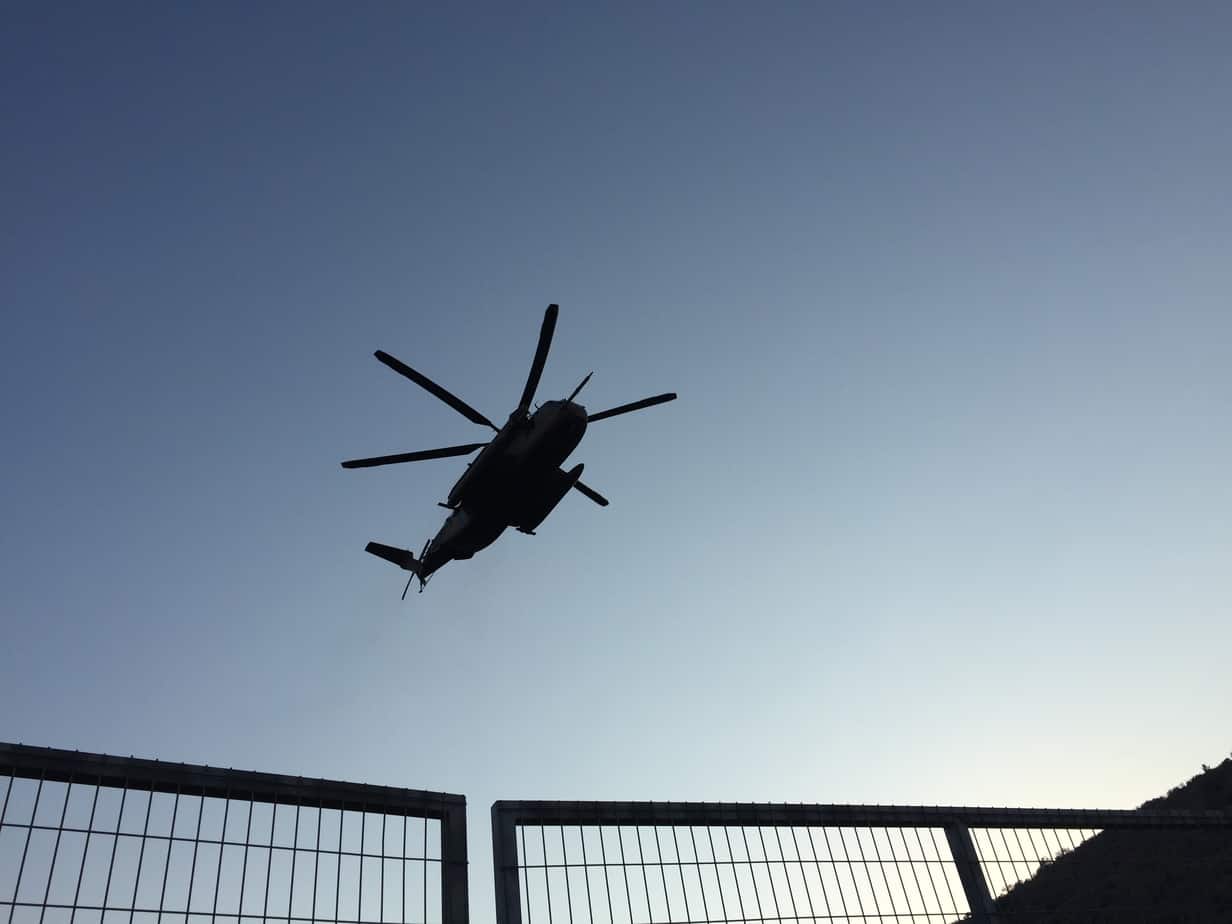 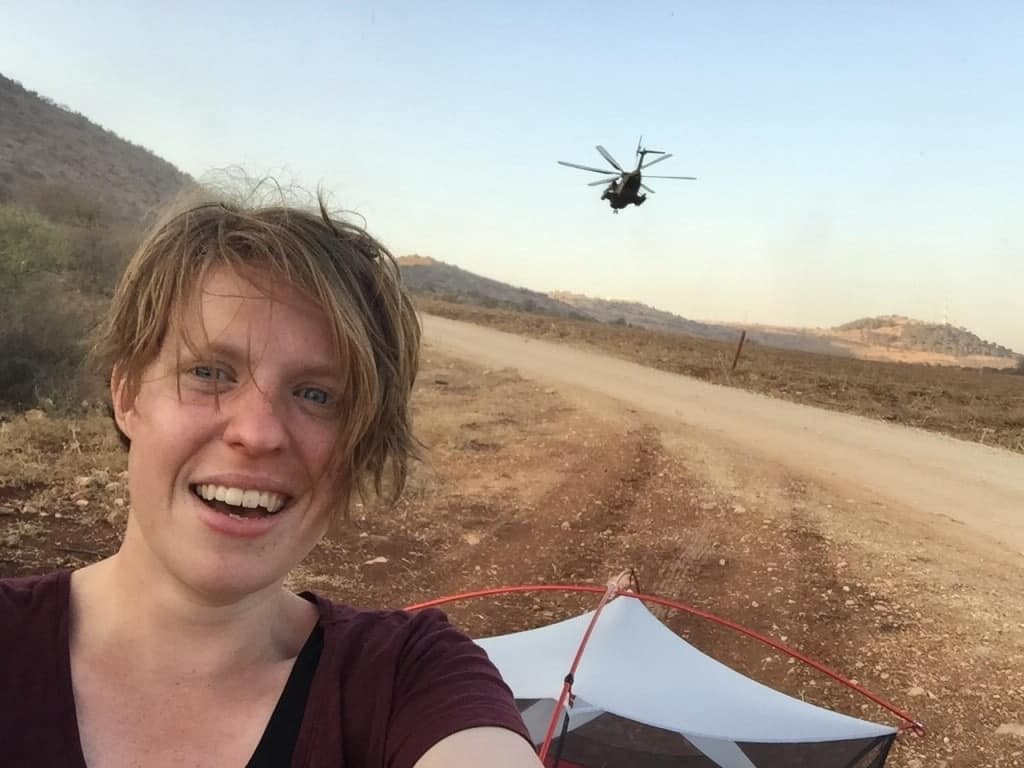 I really hoped Gil would feel better in the morning otherwise we’d have no choice but to rest and lose a hiking day. At least taking care of him had distracted me from my own discomfort as I was really struggling with the heat and heavy pack.

I sat up thinking about it for a while while Gil slept next to me and eventually went to sleep myself around 8.30pm.