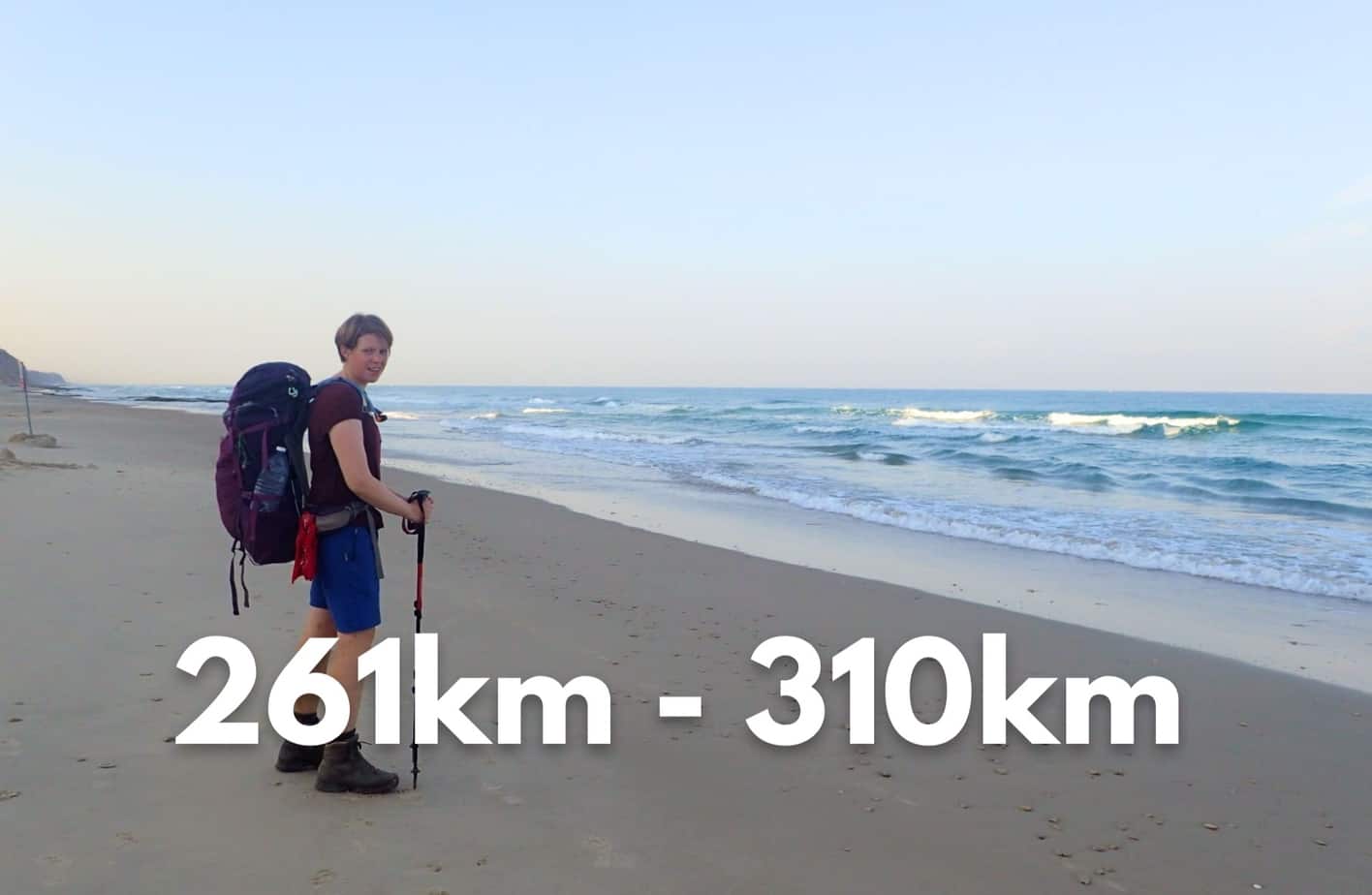 I watched Gil’s dad drive off and accepted that my weekend of rest was well and truly over and it was time to get my head back into walking. We had 5 days until our next rest day and, unlike the previous sections, I was actually looking forward to this part, especially because we do a lot of coastline walking.

The day started with a small climb, nothing too difficult but a bit of effort for my achy, out of practice, legs. We followed a large power line, which noisily crackled above our heads. I really don’t like the sound. After crossing a road, we found ourselves at Ort Binyamina, Gils old secondary school. We sat outside for a few minutes and Gil shared some memories from his time there. 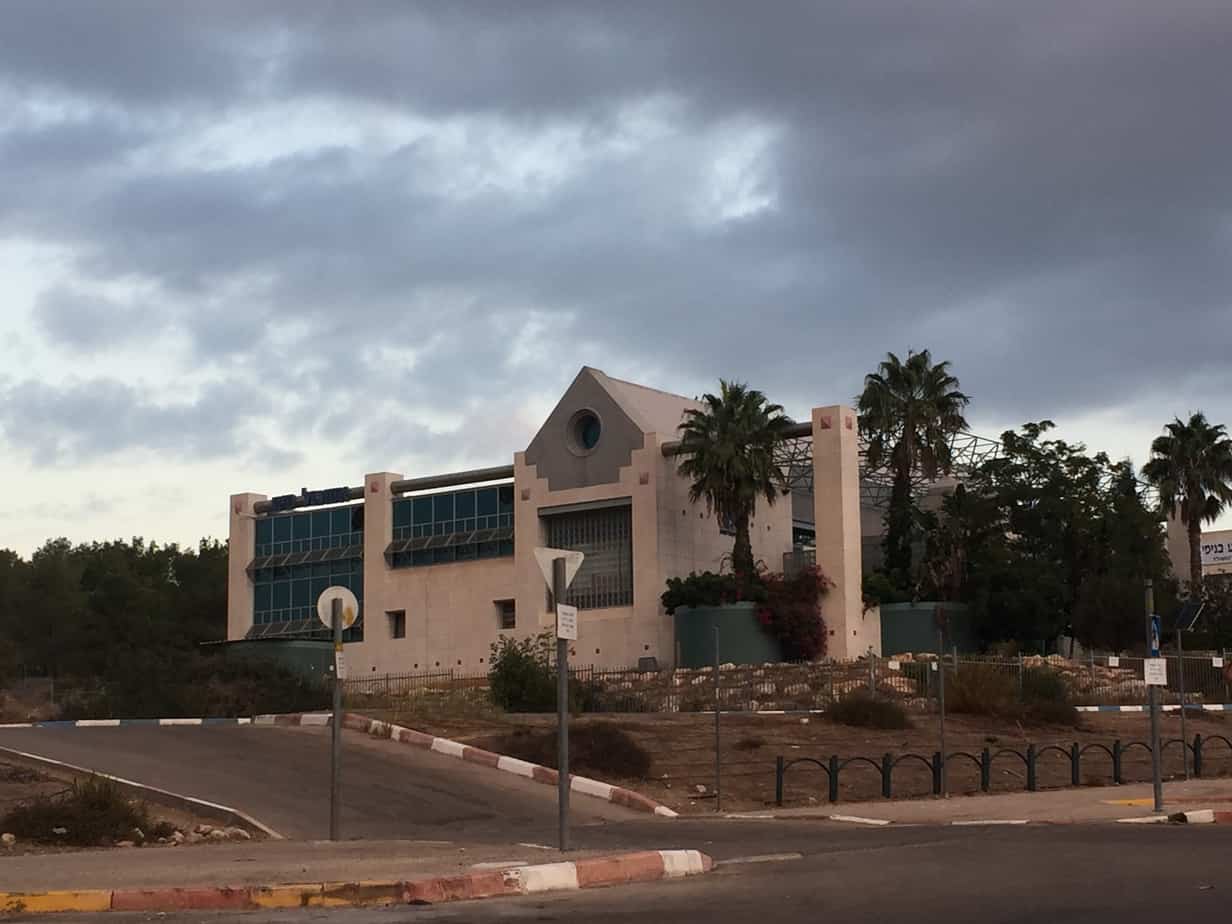 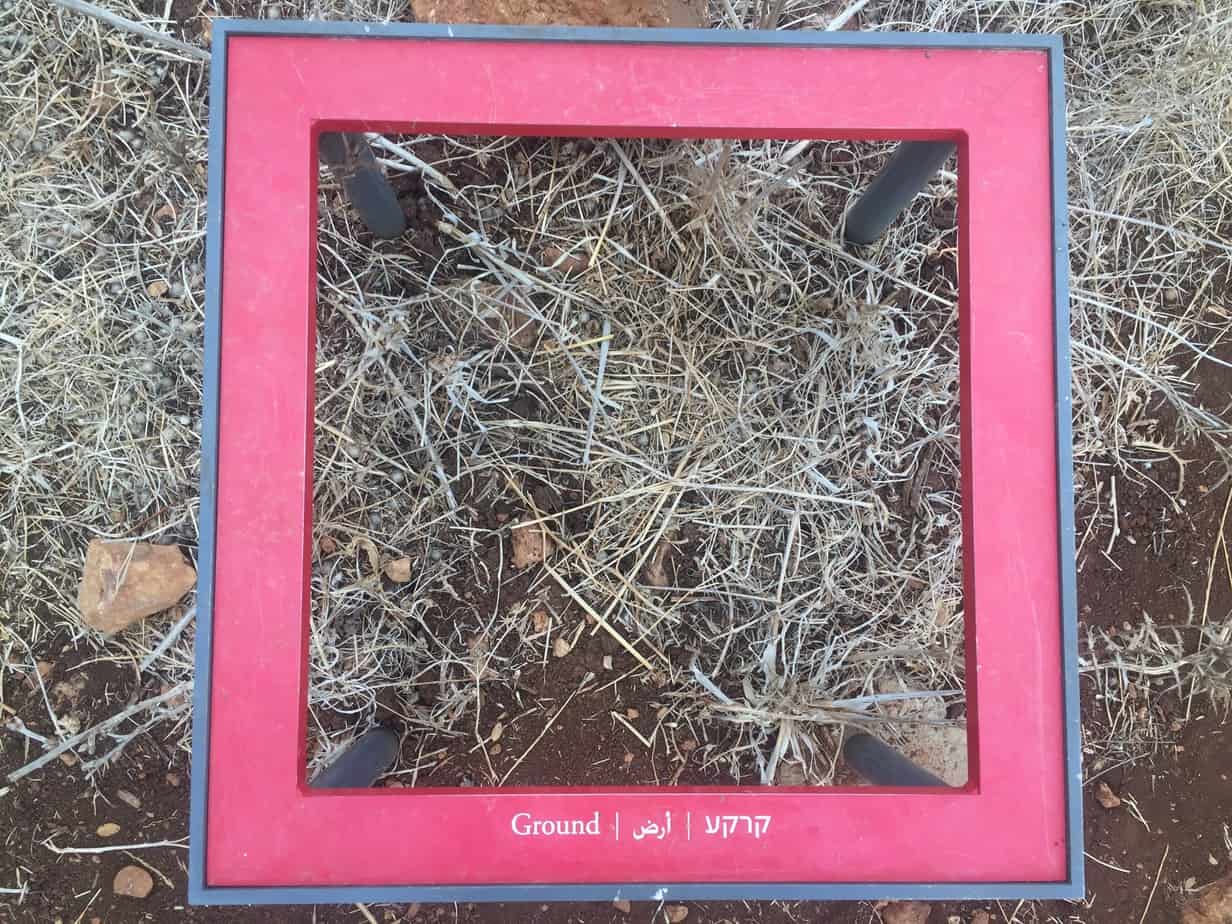 The trail carried on up on an even gentler climb. It was the only other incline we would have for the day…this is the sort of hiking I can handle! The climb down was a lot steeper and over large rocks. When we reached the bottom we walked next to train tracks for 2km. 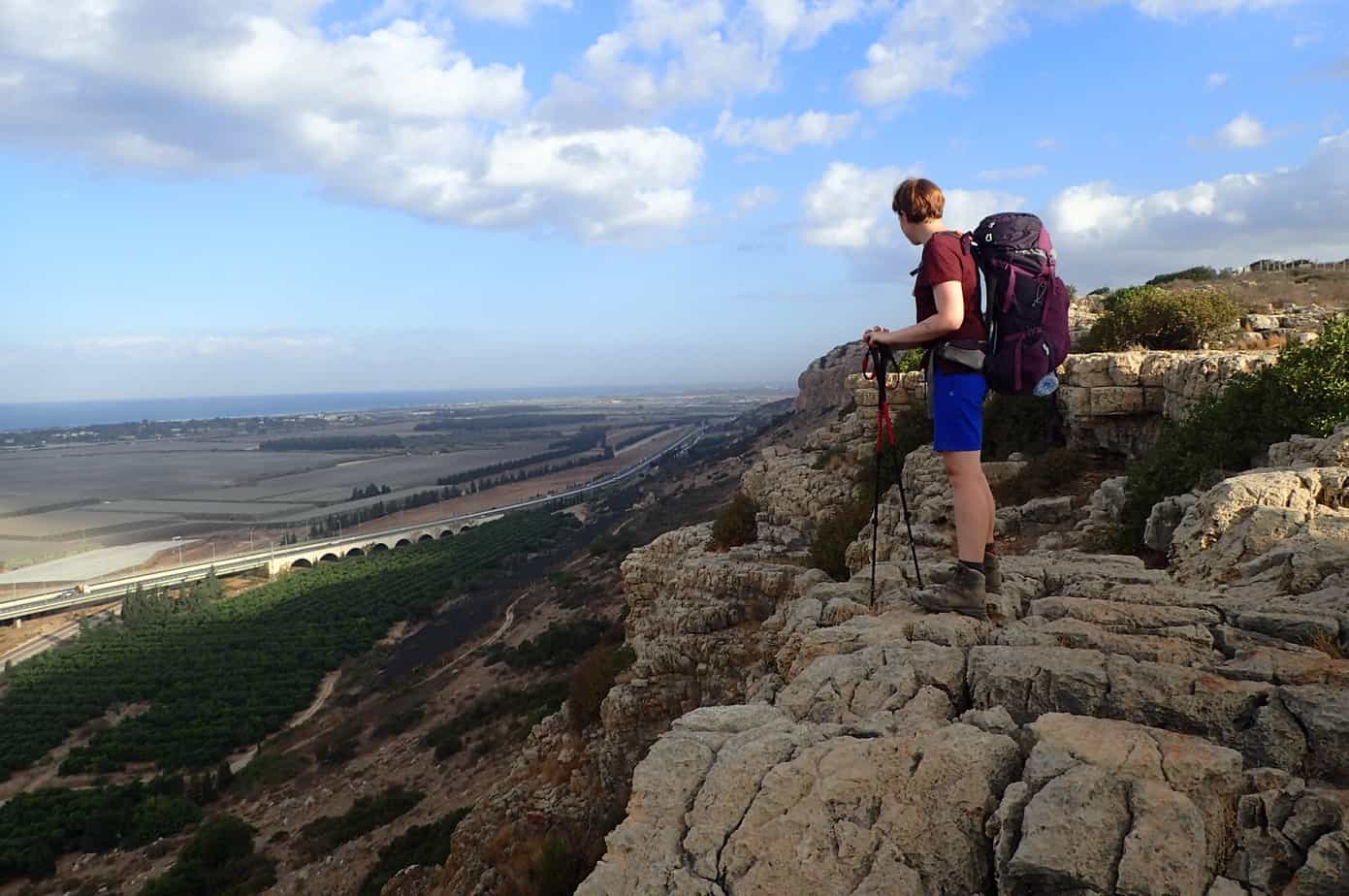 I could already smell the saltiness in the air so I knew the sea wasn’t far. We cut through an Arab town, Jisr Azarka, where we stopped briefly to buy some pitta to accompany tonight’s dinner of couscous with stock. 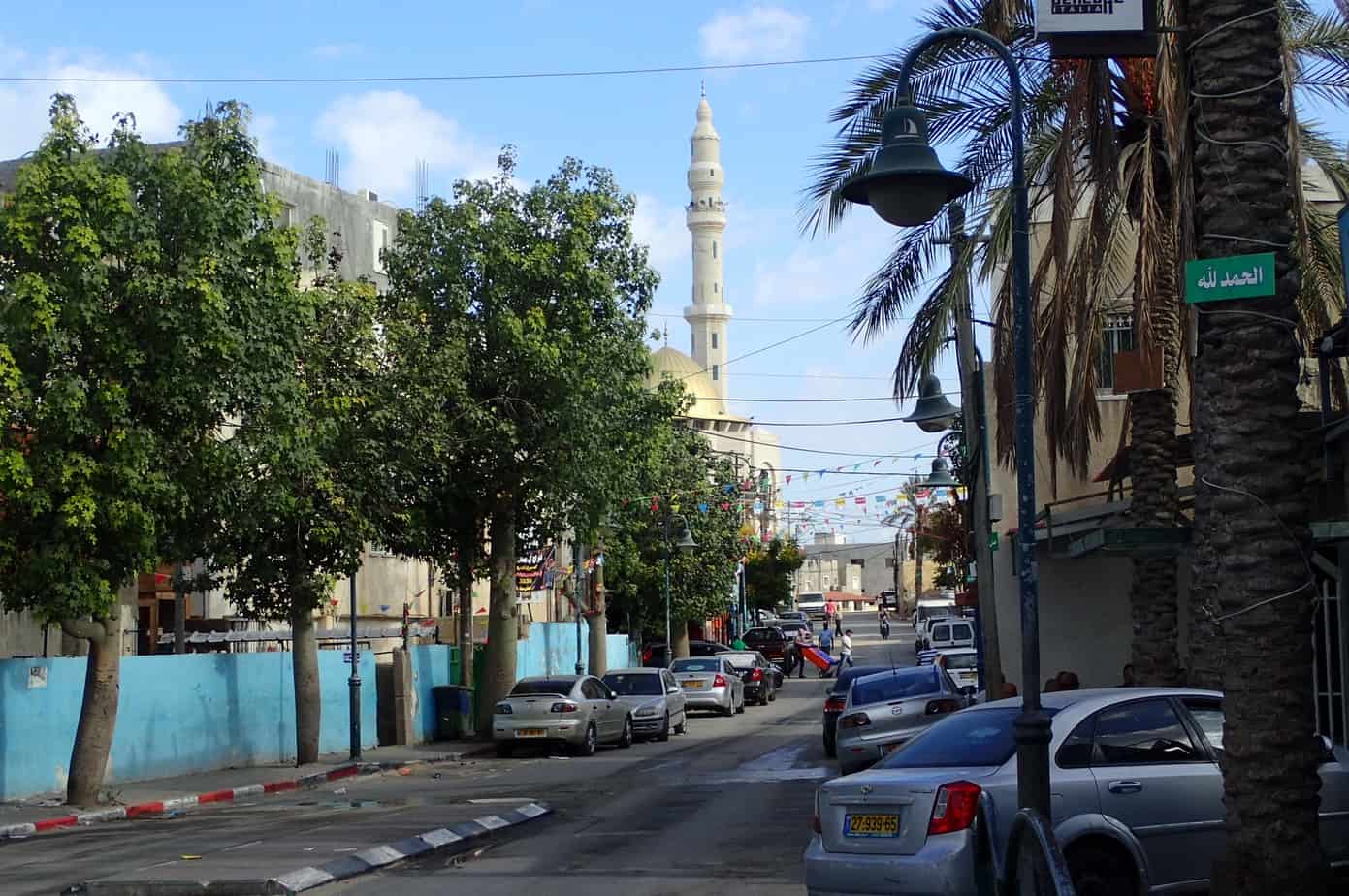 It felt amazing reaching the beach and I instantly felt relaxed. Blue sky, white sands, crashing waves and a cool breeze, what more could you want? 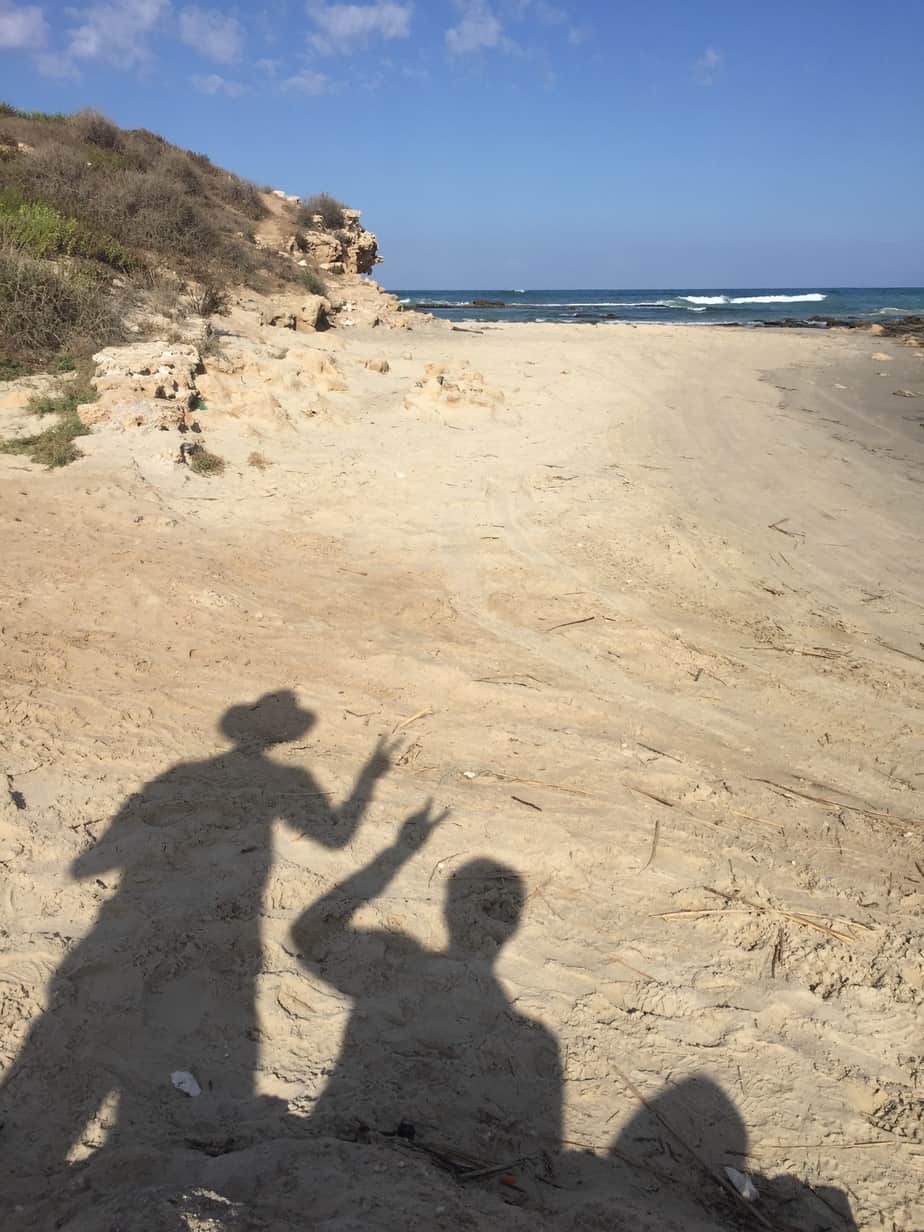 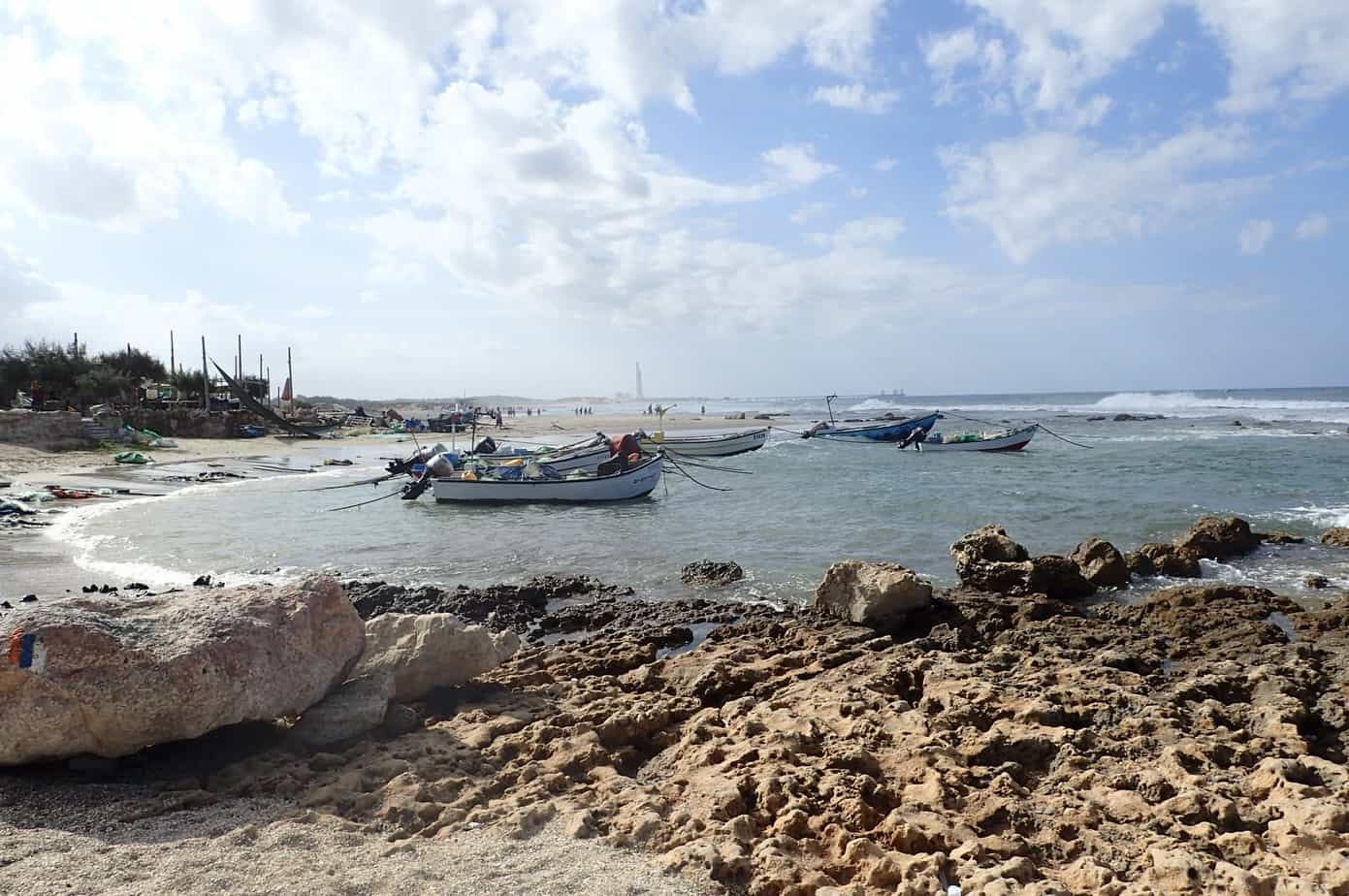 I took off my heavy hiking boots and walked with sandals for the 3km trek along the beach, the waves lapping over my feet. It turned out to be a mistake as the wet sand caught between the sandals and my feet and rubbed my skin causing 2 blisters. I didn’t want to put my boots back on yet so I had no choice but to embarass my nation of people by doing the one thing you should never do as a Brit abroad – wear socks and sandals!

I have to admit it’s a surprisingly comfy combo. 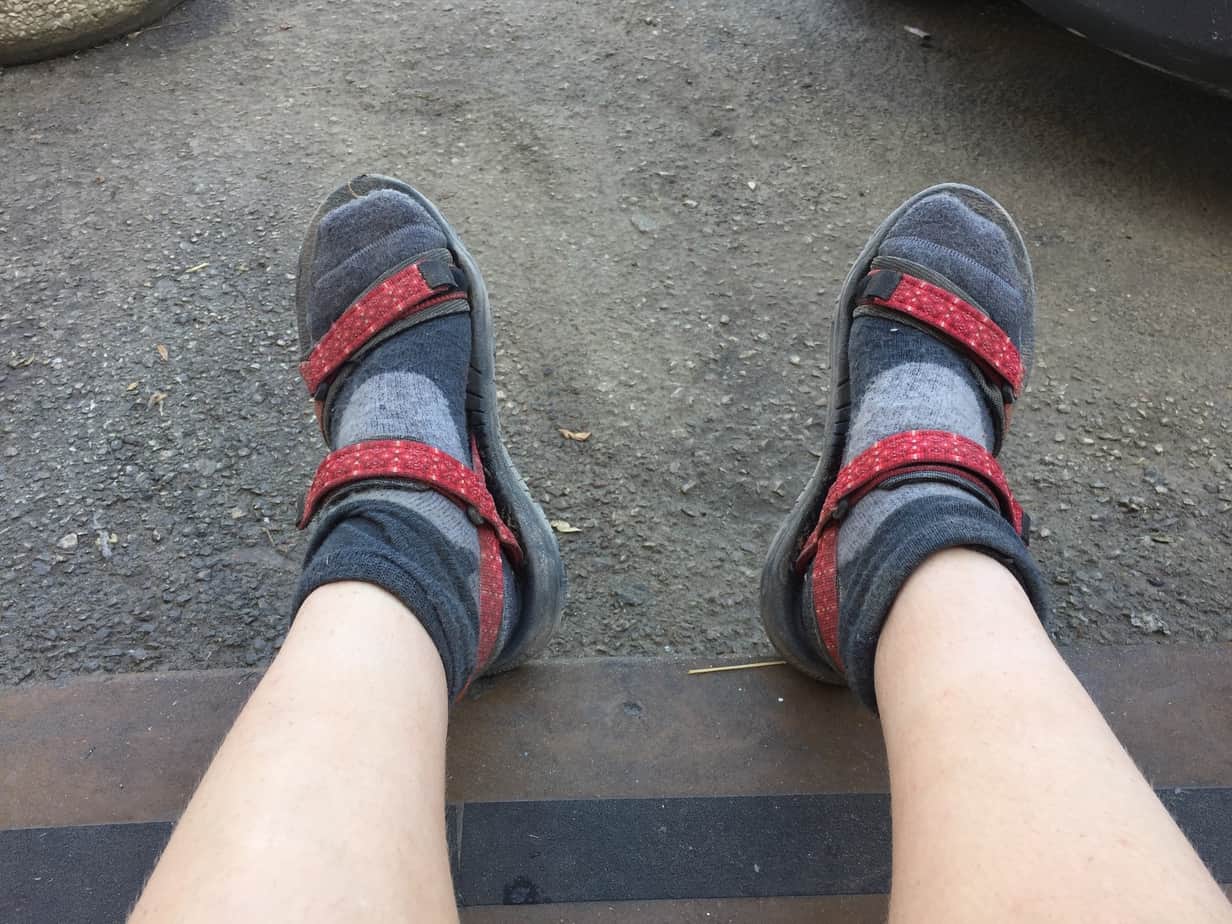 The trail then took us down a long straight road that seemed to never end. Over 5km in total with nothing interesting to look at. We broke it up by stopping at a gas station to eat our leftover pizza from yesterday along with a yogurt drink (for me) and coke (for Gil). 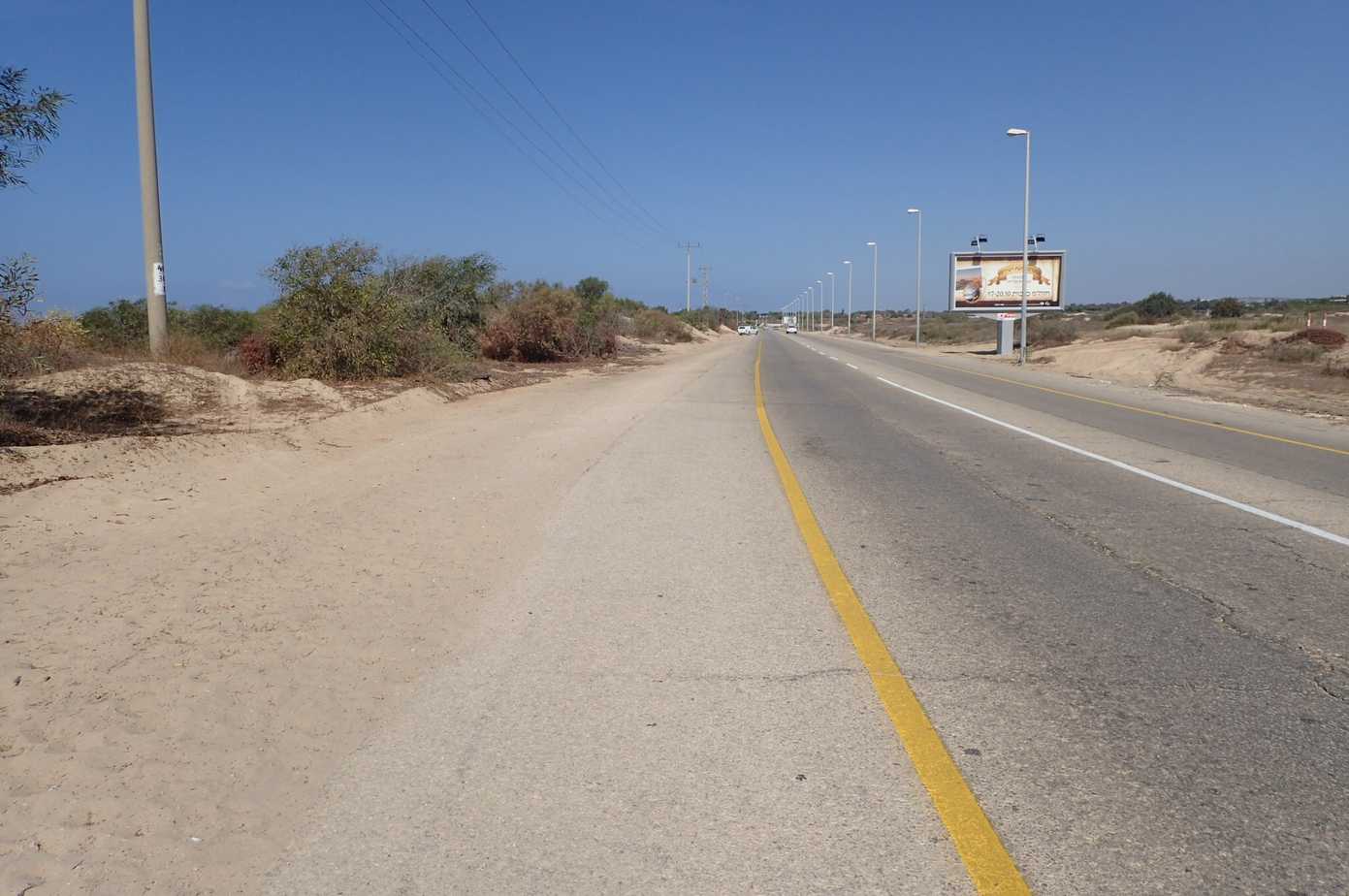 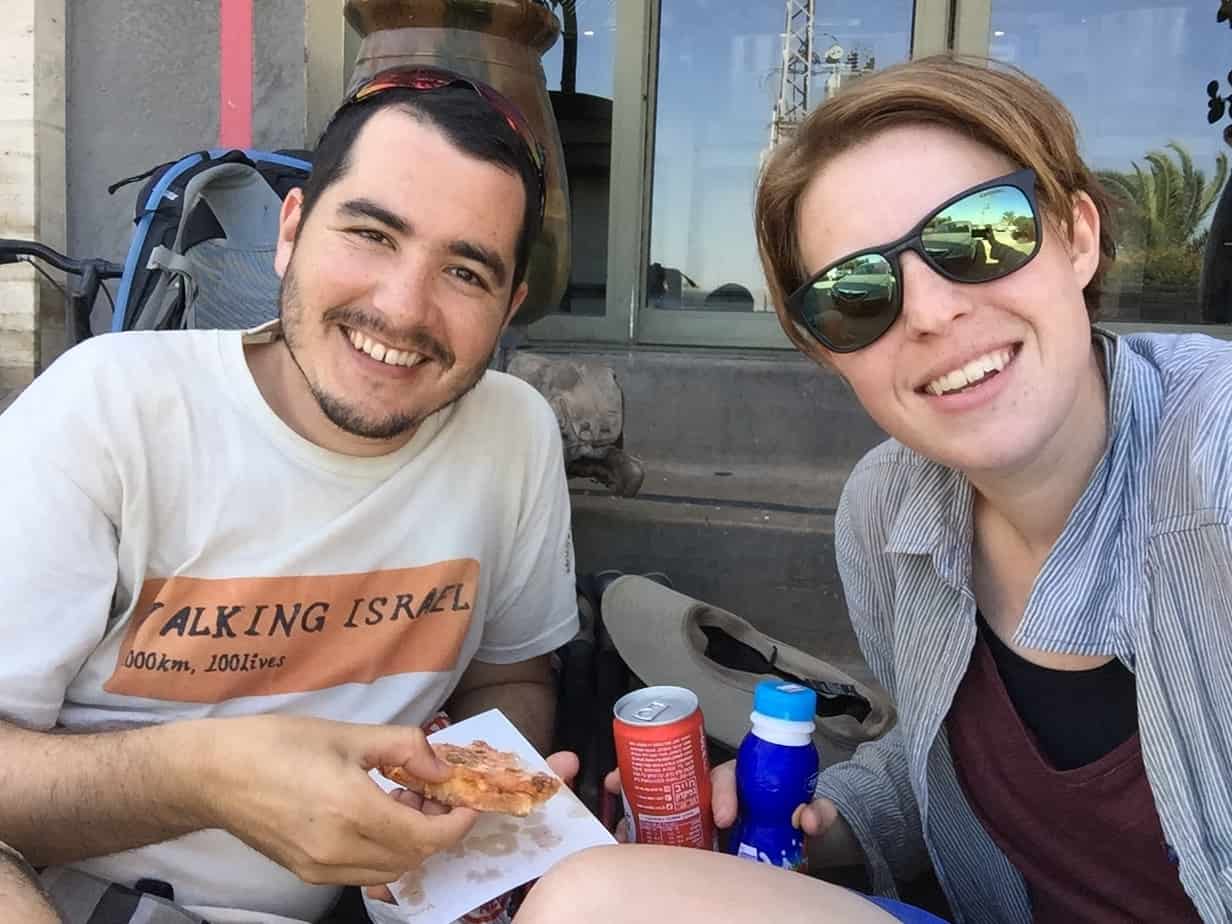 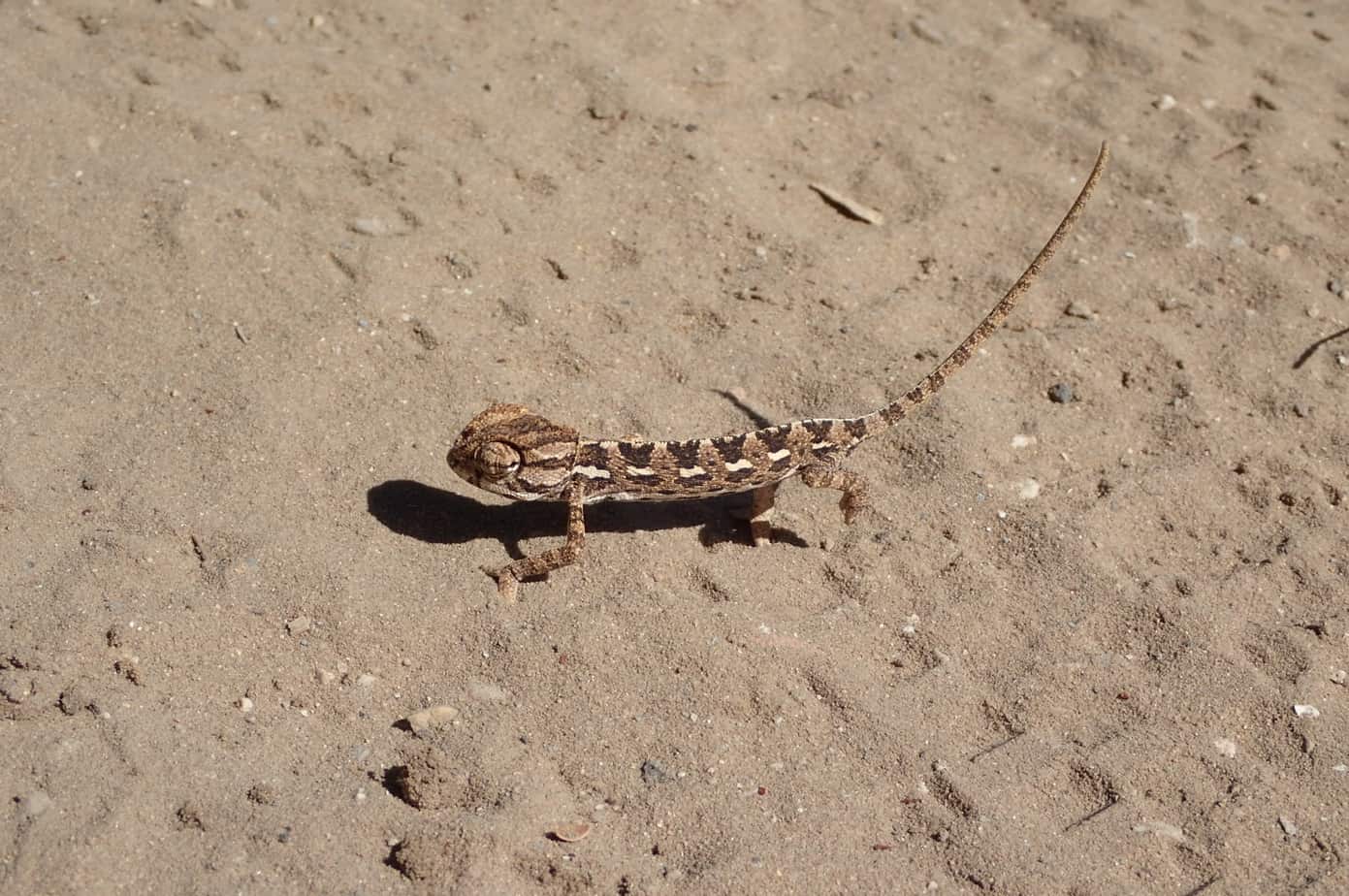 At last the road did eventually end. Just as we were turning to head back to the beach, we spotted Omri and Noam! It was great to see them both again and I was really pleased to hear that Omri has decided not to quit. I really like these boys and it’s a shame that they are taking a few days rest now to go back home so we will end up much further ahead of them. maybe we will see them at the end in Eilat as we are planning to stay a week there. 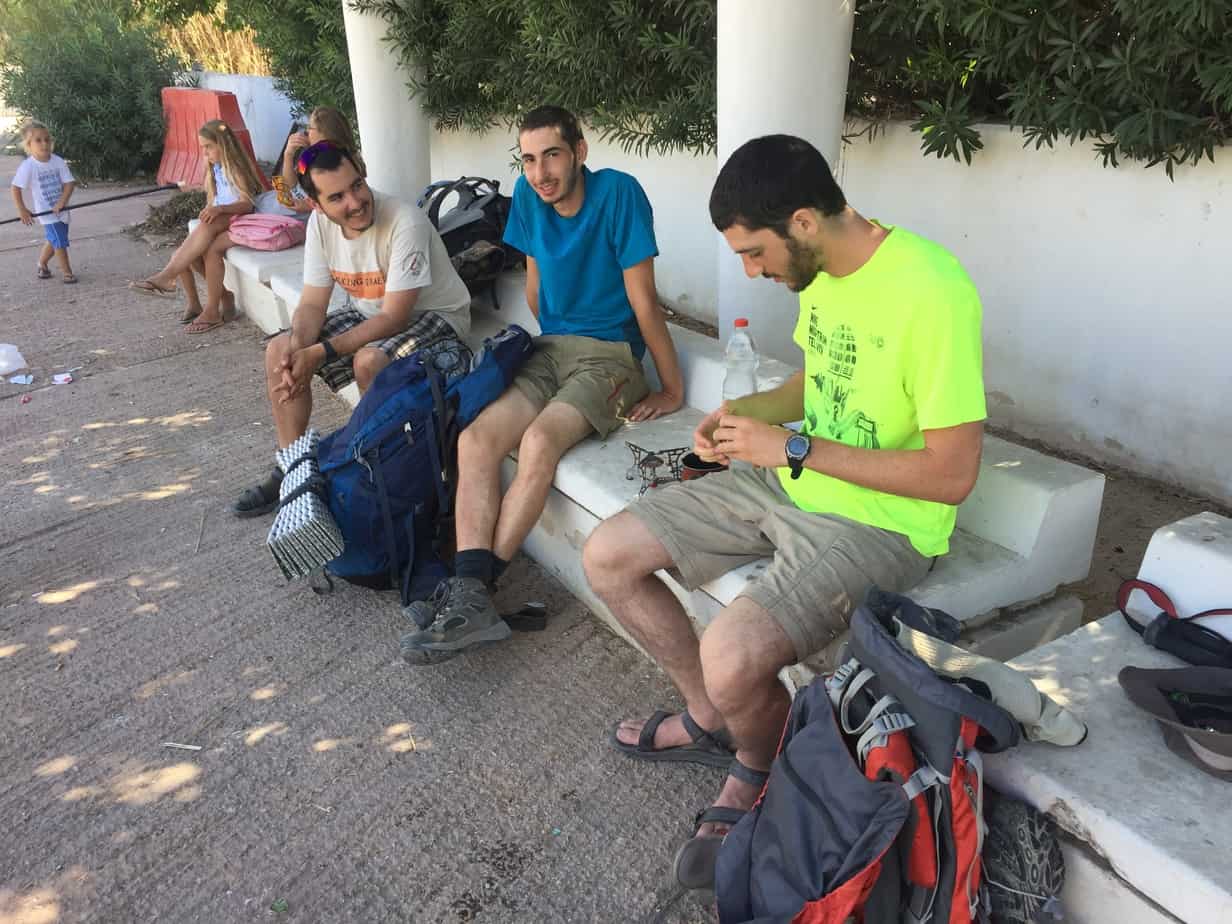 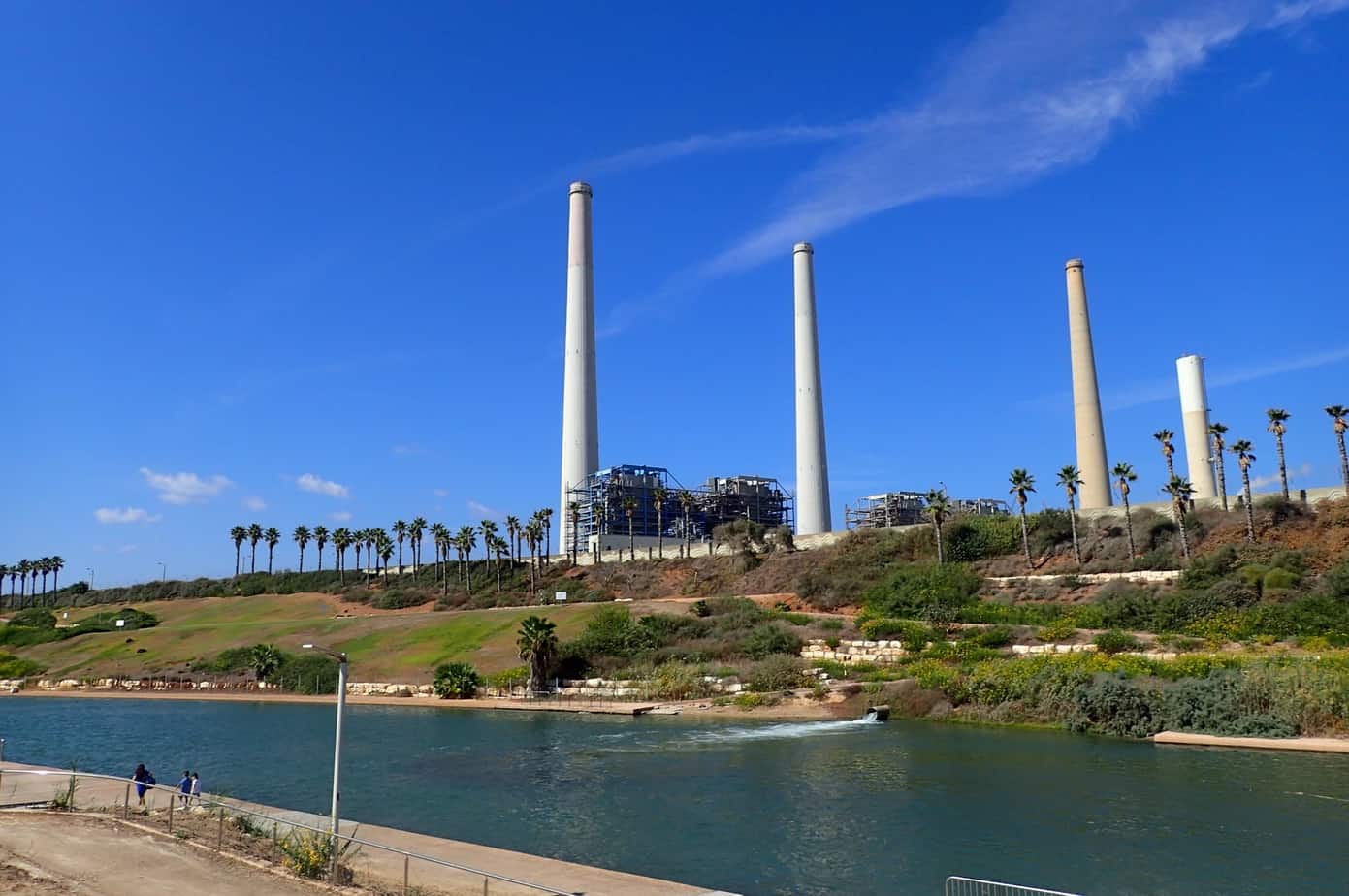 We hiked the final stretch to Hadera, the end point for today, but rather than camp in the town, we opted for the beach. We both ran straight in the sea. It was only 2pm and, as the day had been such an easy walk, I felt really awake so I made the most of some beach time by reading my book and calling some friends back home. Before bed I had a nice stroll along the beach (nothing too strenuous) while watching the sunset. It felt like a holiday…a real one! 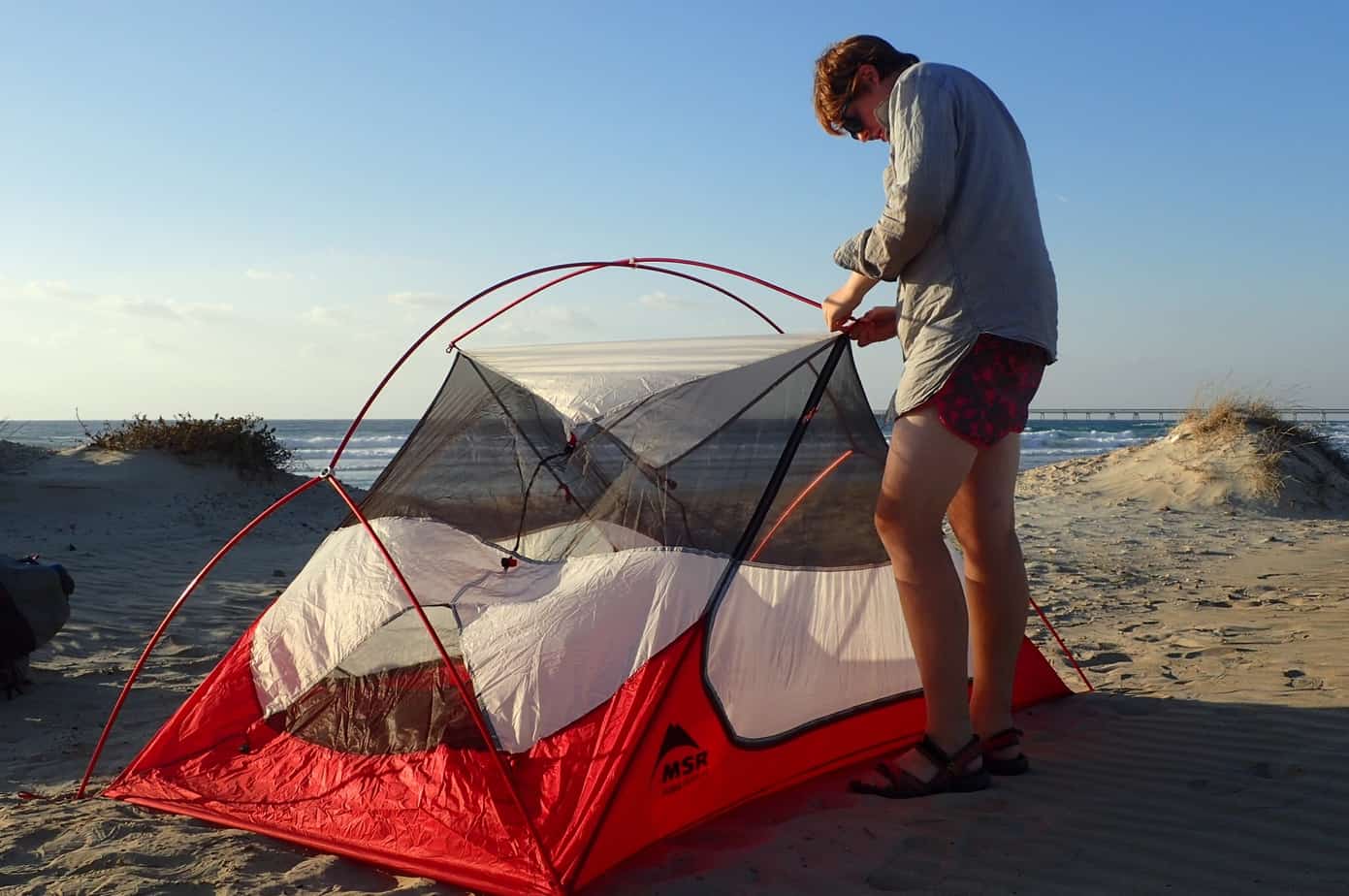 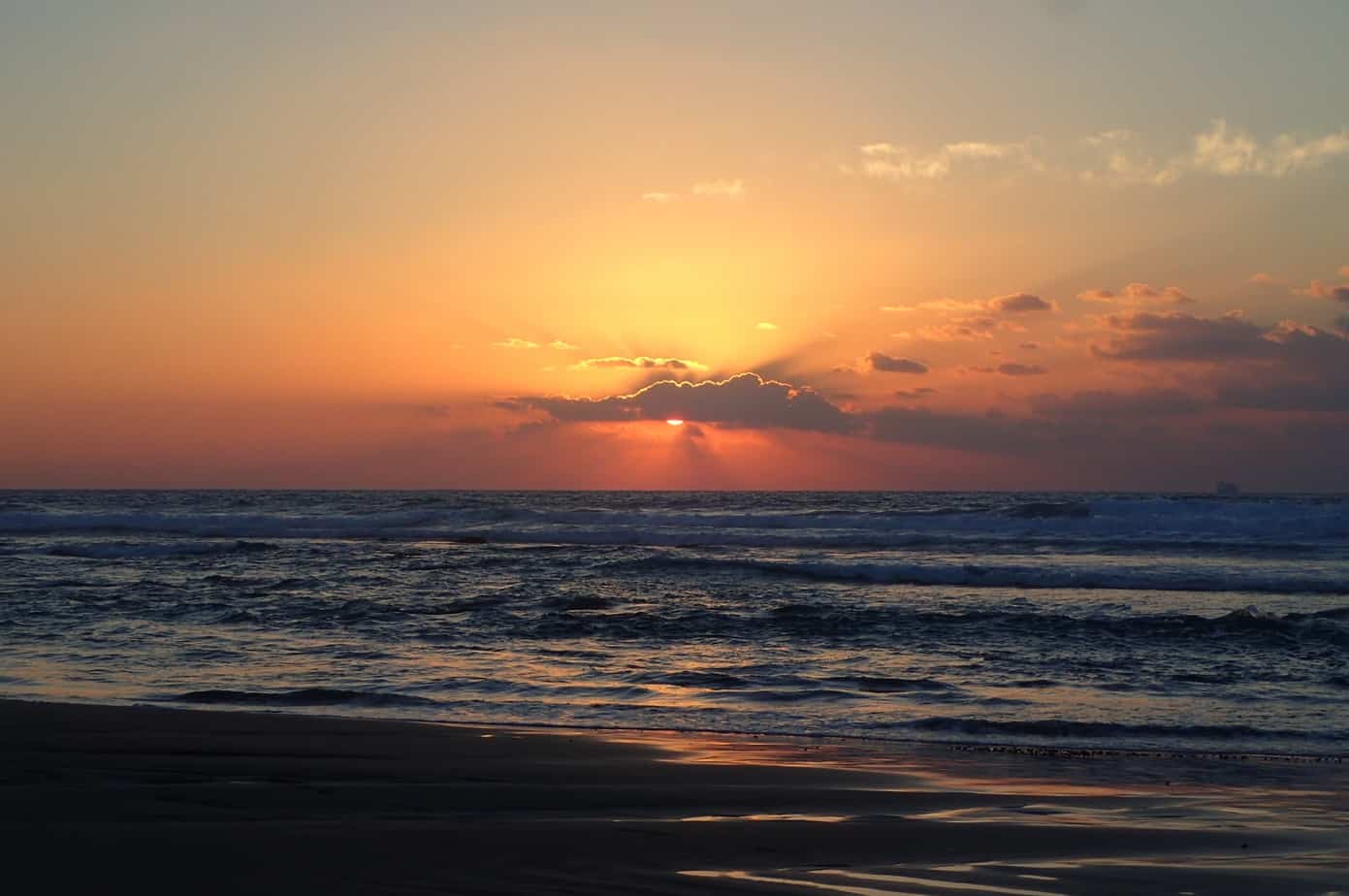 The sound of the sea, the continual breeze and the soft sand all equated to me having a great nights sleep. I was so happy that I had a second night on the beach to look forward to.

We walked Away from the sea and through the nearby city, Hadera, for about an hour until we reached the train station. We continued along a dirt track that soon turned into sand again, although we were quite a way from the beach. The sand here was so fine it took a massive effort to walk on as you kept sinking into it. 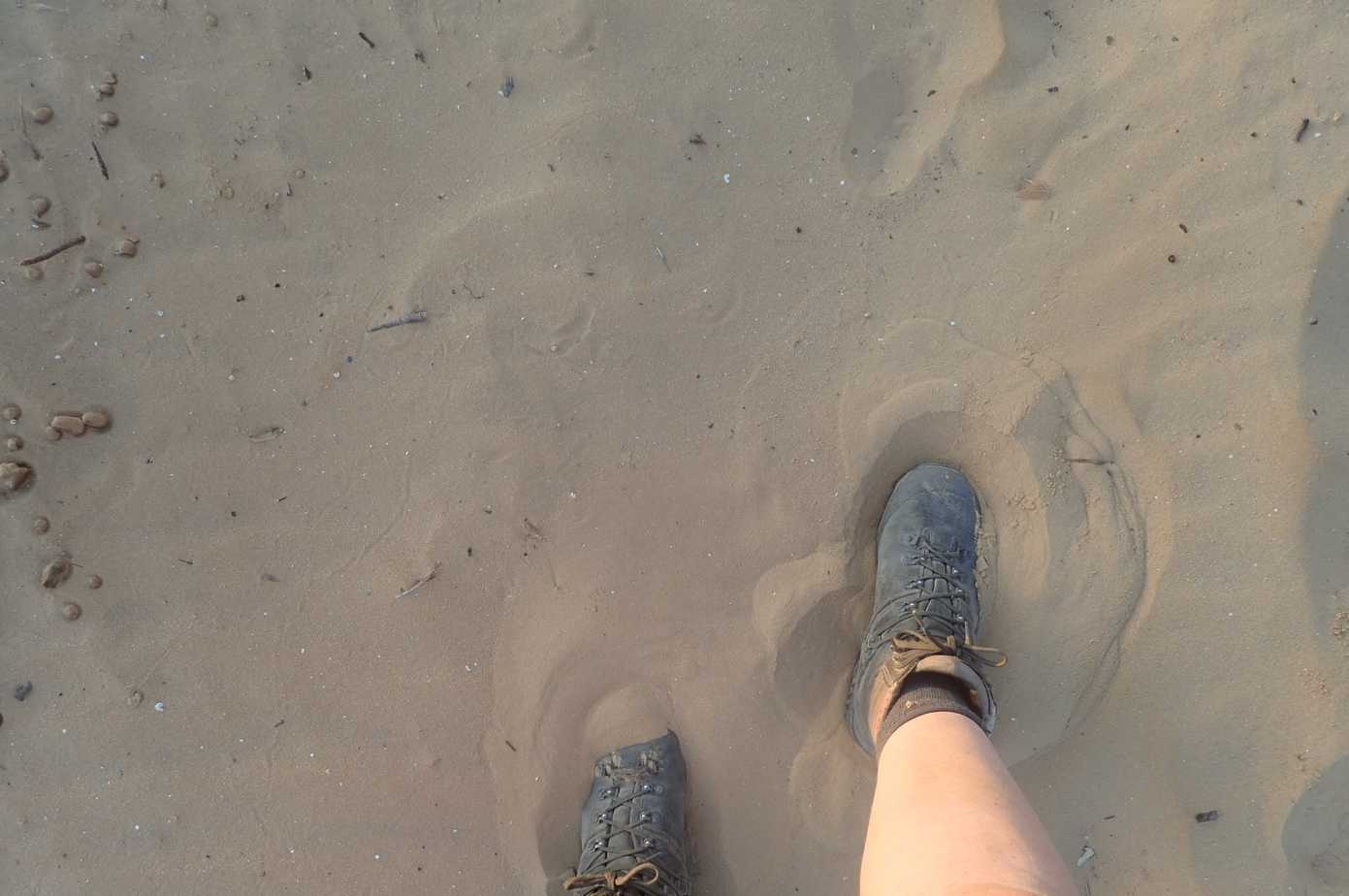 We managed to get lost so headed to the train tracks as we knew that the trail eventually went through an underpass. We almost walked straight past it…it was a little on the small side! 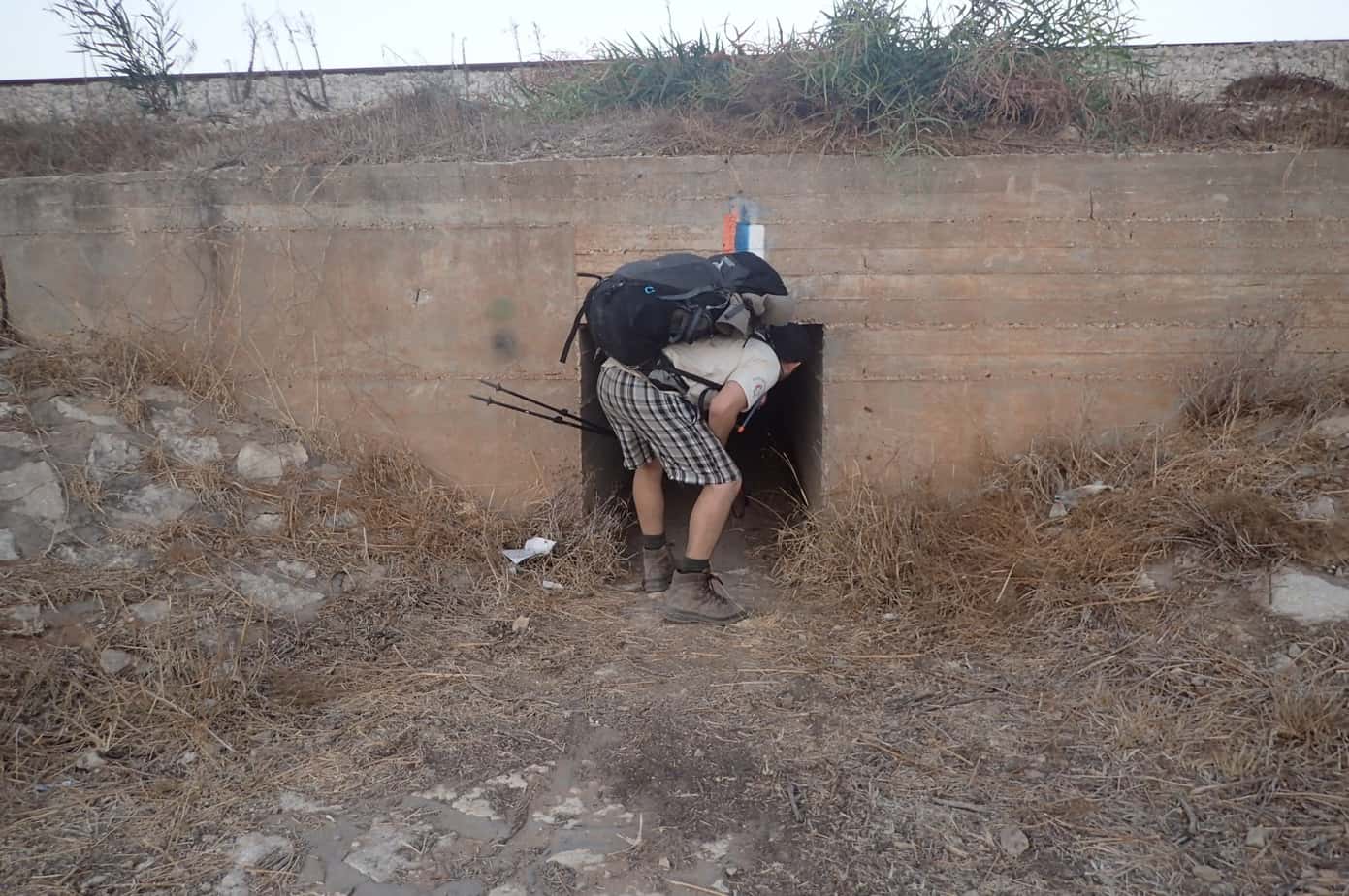 When I got to the other side I just caught the last of the sunrise. It was especially pretty today and I took a moment to think of all my friends and family back home still in bed as it is only 5am in the UK. Except maybe my niece and nephew who could very well be up pestering their parents.

The track followed the train line on this annoying fine sand for a really long stretch. It was like I was walking in slow motion. My glutes and thighs started to burn with the effort and progress was painfully slow. At last, we turned off and onto a ‘real’ path next to a river – the first nice view of the day. I was so excited to be back on solid ground I did a tap dance. Solid ground is now added to my grateful list along with beds, food, running water and clouds.

I was happy to find myself back by the beach. I didn’t enjoy the mornings walk at all, it was long and boring. I fancied listening to a podcast so started ‘Serial’ a popular but now dated series – I’m always well behind the times with things (Im only on season 2 of Game of Thrones!). I loved the first episode and immediately listened to the 2nd, 3rd and 4th before reluctantly stopping myself – I have no way of updating my iPod shuffle so the stuff on it needs to last the rest of the trip. No binge listening for me .

The coastline here was even more luscious than the day before and the cliffs also provided shade from the sun. Because my feet were sore from yesterday’s blisters, I stayed in my boots…not as nice as sandals. 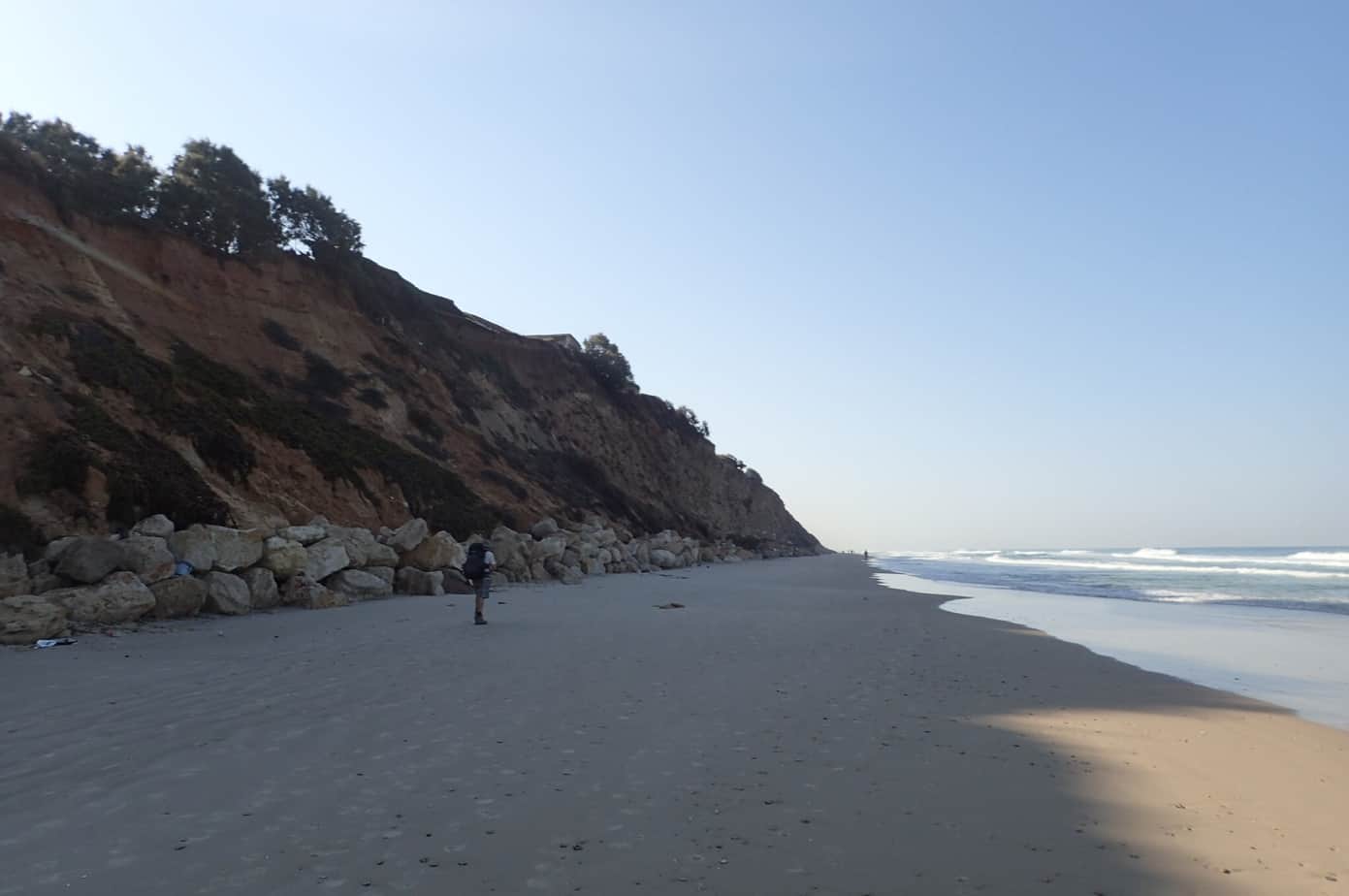 We moved from the beach to the top of the cliffs and I suddenly felt really hungry. I had been daydreaming about food most of the morning but sensing that I was near to some real food had put my stomach into overdrive. I sniffed out a supermarket, brought hummus, cucumbers, crisps and chocolate milk. Despite being ravenous, I couldn’t finish it. My stomach has definitely shrunk.

We had less than 5km left until the beach where we were camping tonight. It is common in Israel for people to set up huge tents on the beach with temporary kitchens, sofas and sound systems where they sleep for days or weeks on end over the summer months with friends and families. We passed one that has to be the best set up I have seen yet when a guy ran out to us holding a tray of BBQ’d meat. He invited us in for a break. Apparently they have been doing this for 35 years and invite every hiker to join them. They gave us cold beer and fed us sweet potatoes, egg plants and cake (vegetarians!). So unbelievably kind! 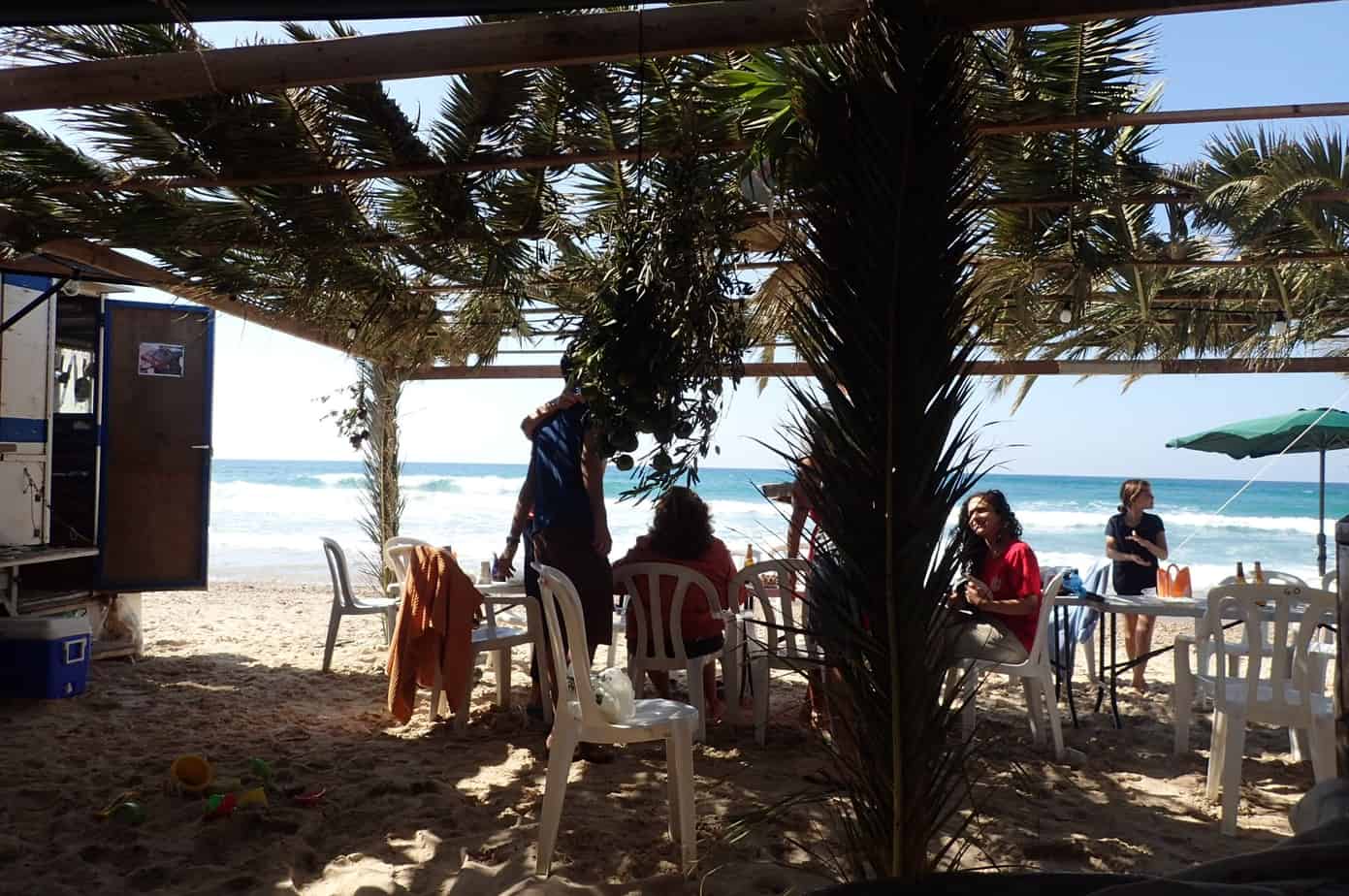 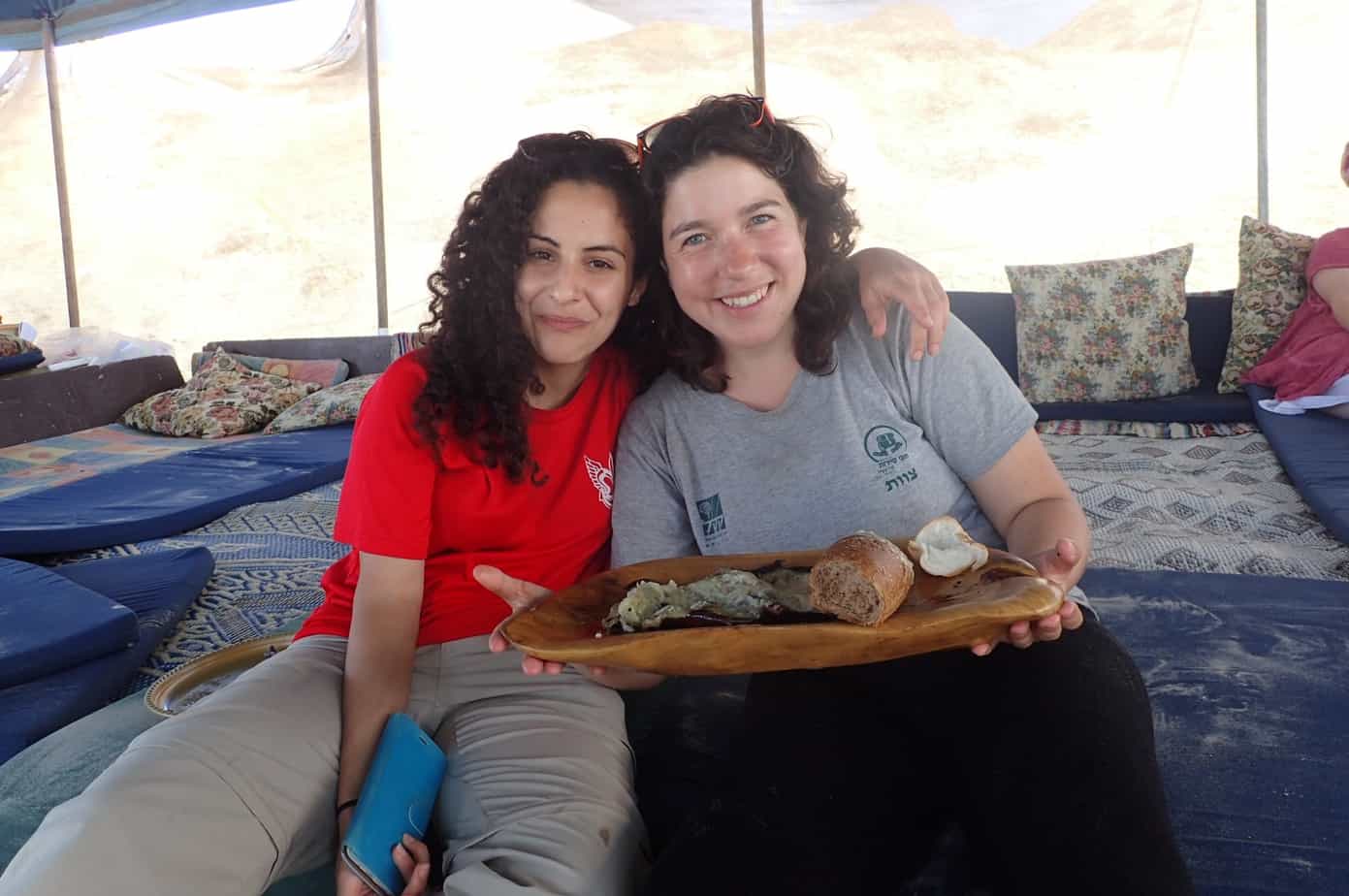 We even bumped into Tal again inside the tent, this time with 2 different hiker friends.

About 5pm we walked a bit further down the beach to a nice spot to pitch our tent. I washed in the outside showers and caught up with my blog. There have been loads of people about all day so it was nice to have some peace as the sun set and everyone headed home except for the occasional runner. Dinner tonight was spaghetti….with stock.

2 great hiking days in a row. I think this coastline stretch of the hike might end up being a highlight of the trip. 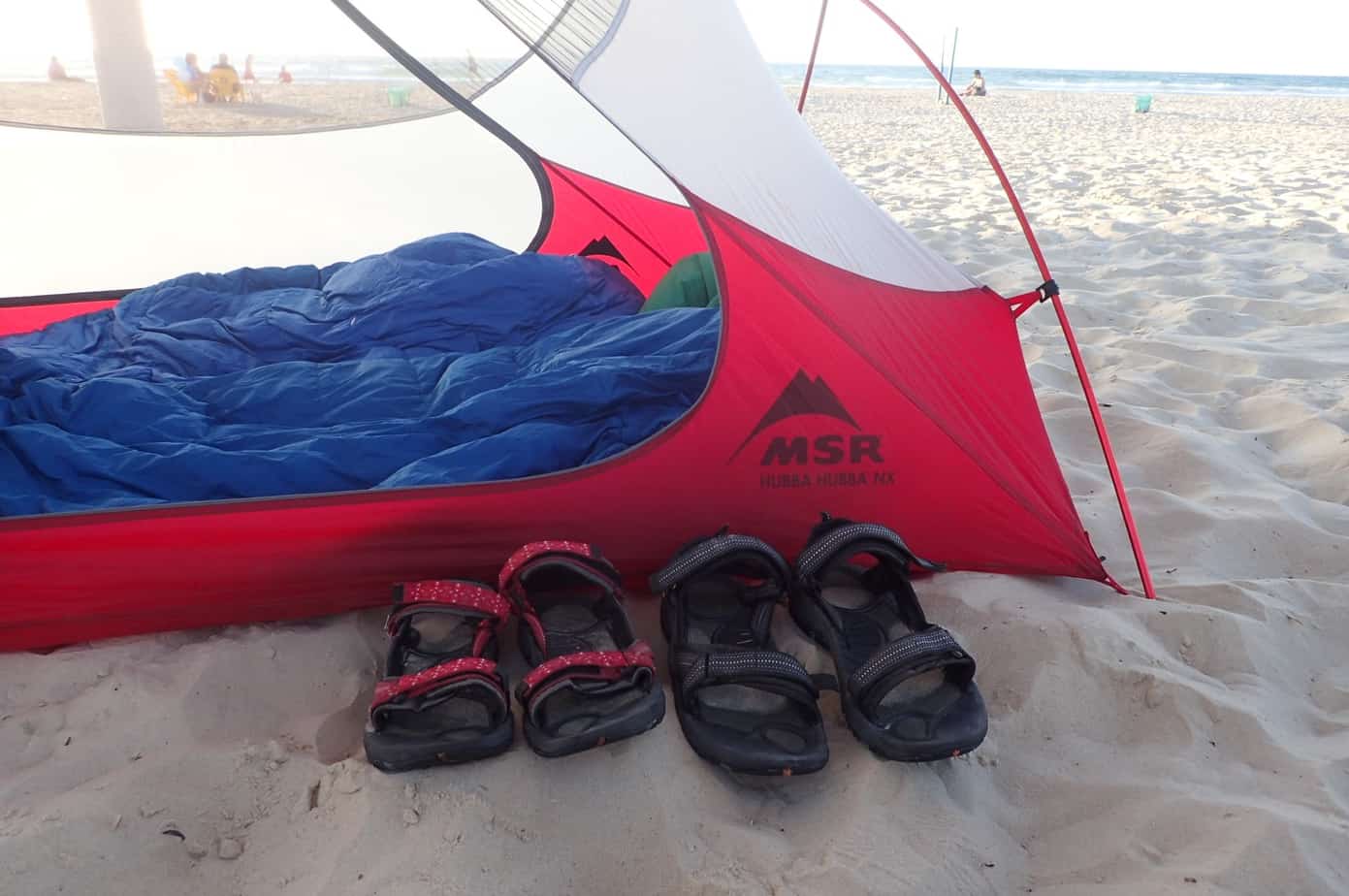 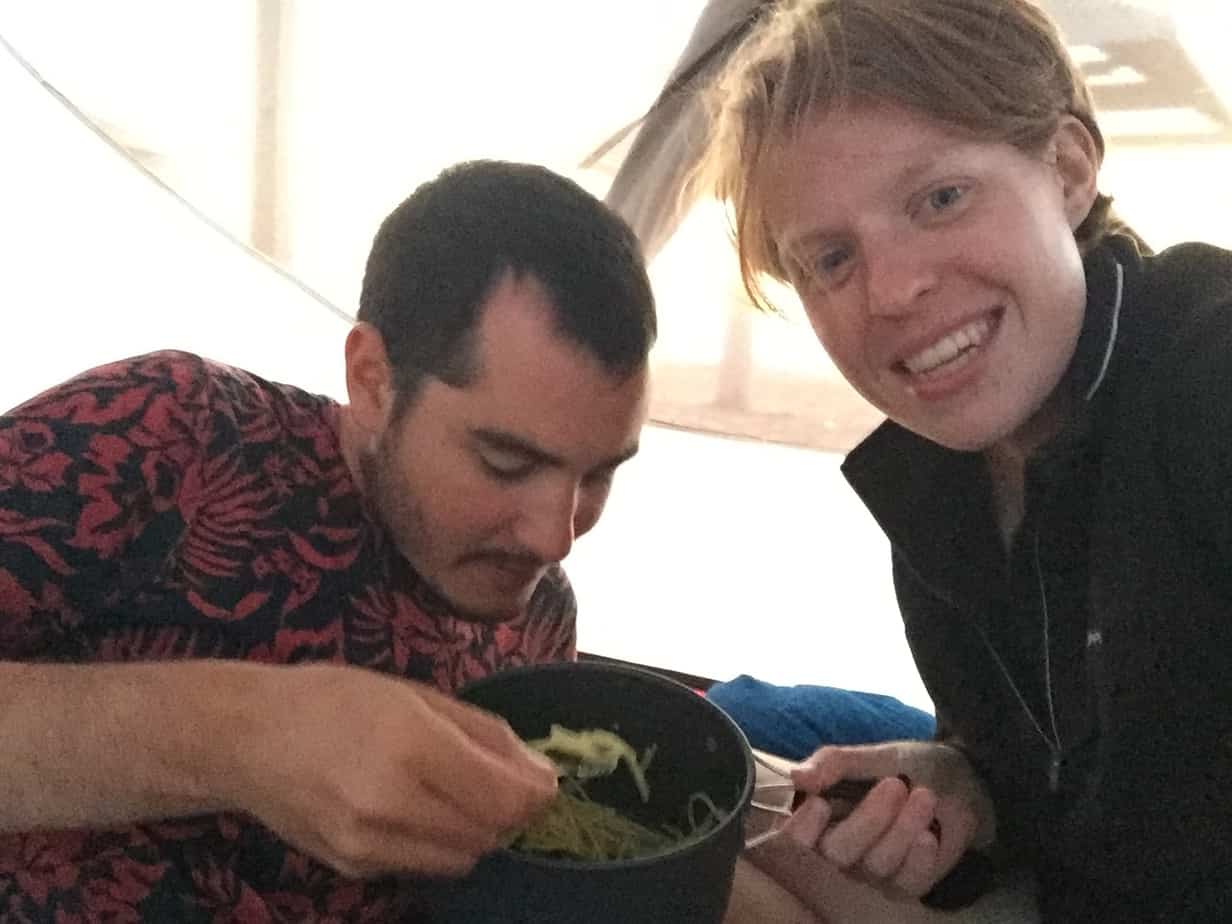