It had not been an easy day, especially for Gil. Thankfully he woke feeling a lot better, although he still wasn’t 100% – not ideal for 24km trekking day that was almost all uphill. I hadn’t slept well as my thermarest inflatable roll may had a hole (probably from one of the thorns that came flying in from the helicopter!). Trying to sleep on the hard ground with no padding was not only an impossible task but it left me feeling bruised.

An hour and a half in and the trail scenery suddenly changed. We found ourselves walking in a beautiful valley.  I walked along with my head up trying to take in the view as I munched on some breakfast Weathers Origionals. We continued on into a tall forest and I was grateful for the shade. 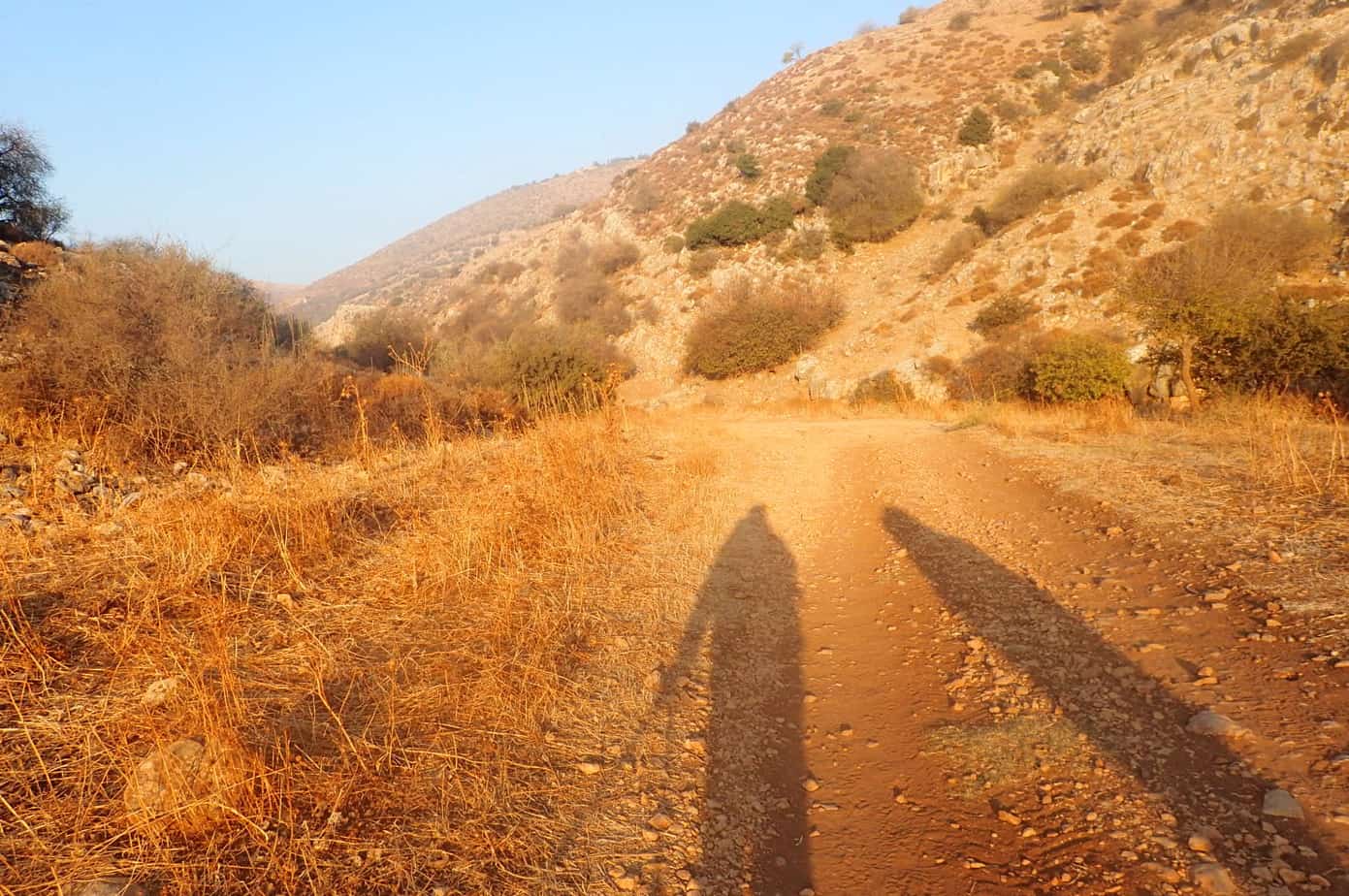 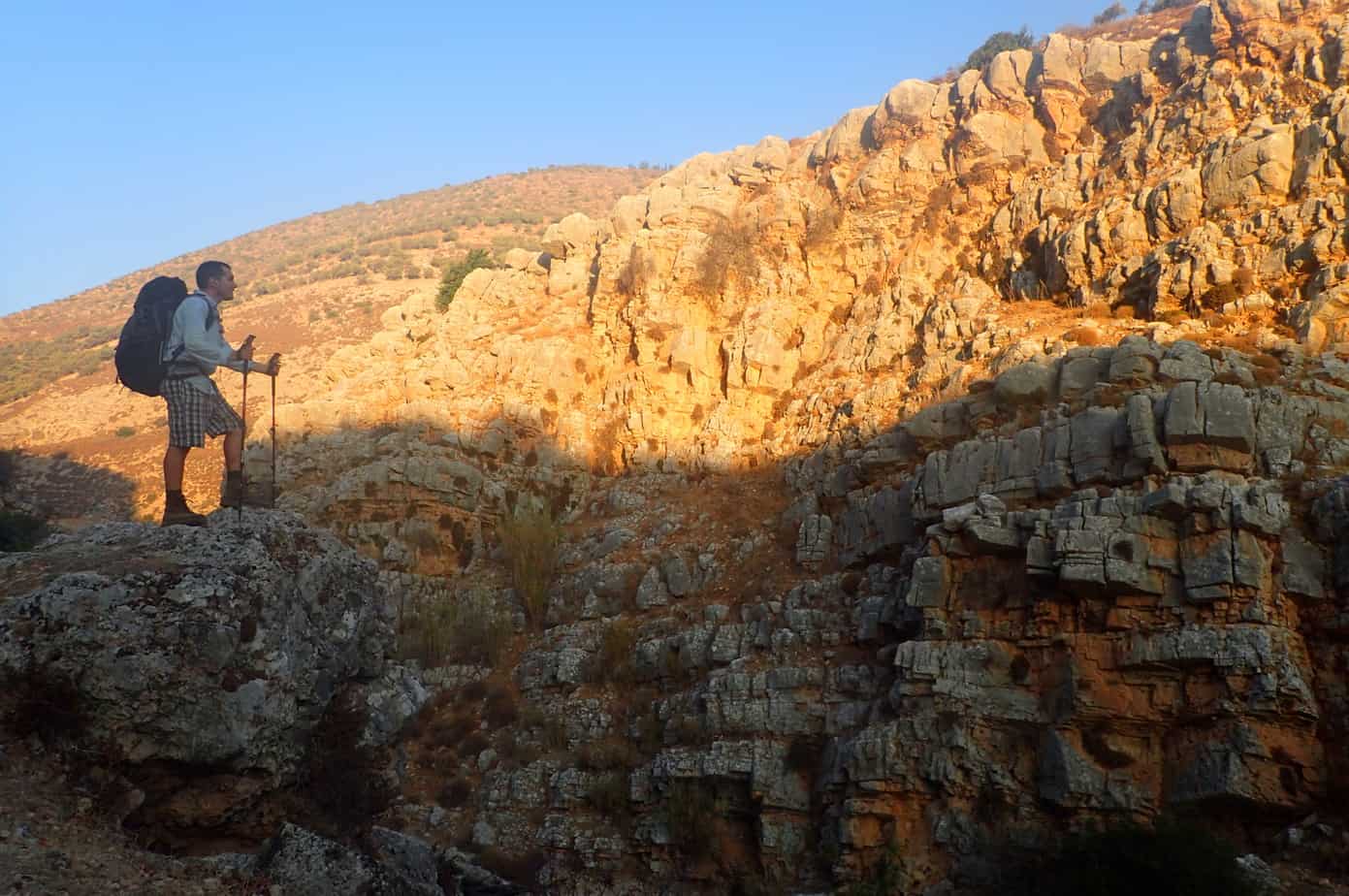 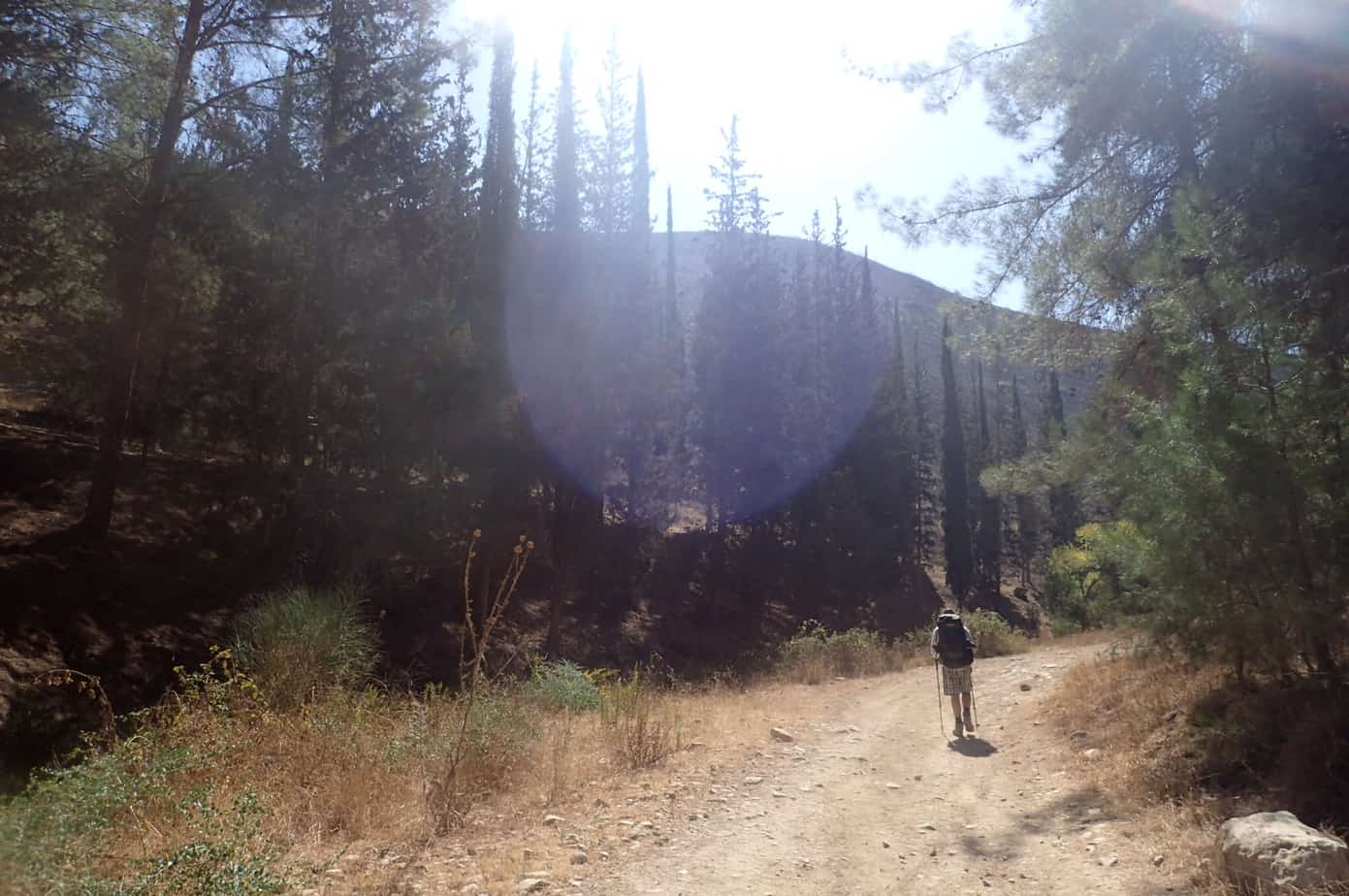 Our energy levels suddenly dipped. Gil plugged into some music and I listened to a podcast, for the first time, which turned out to be a great hikers companion. I especially loved listening to Radio 4’s Desert Island Disks – interviews with various people based around what 8 tracks they would take with them if strandered on an island. I heard an interview with Bill Gates, who left Harvard college early to start Microsoft and then with Damien Hirst, who left school with an E in art – that’s my kind of inspiration! 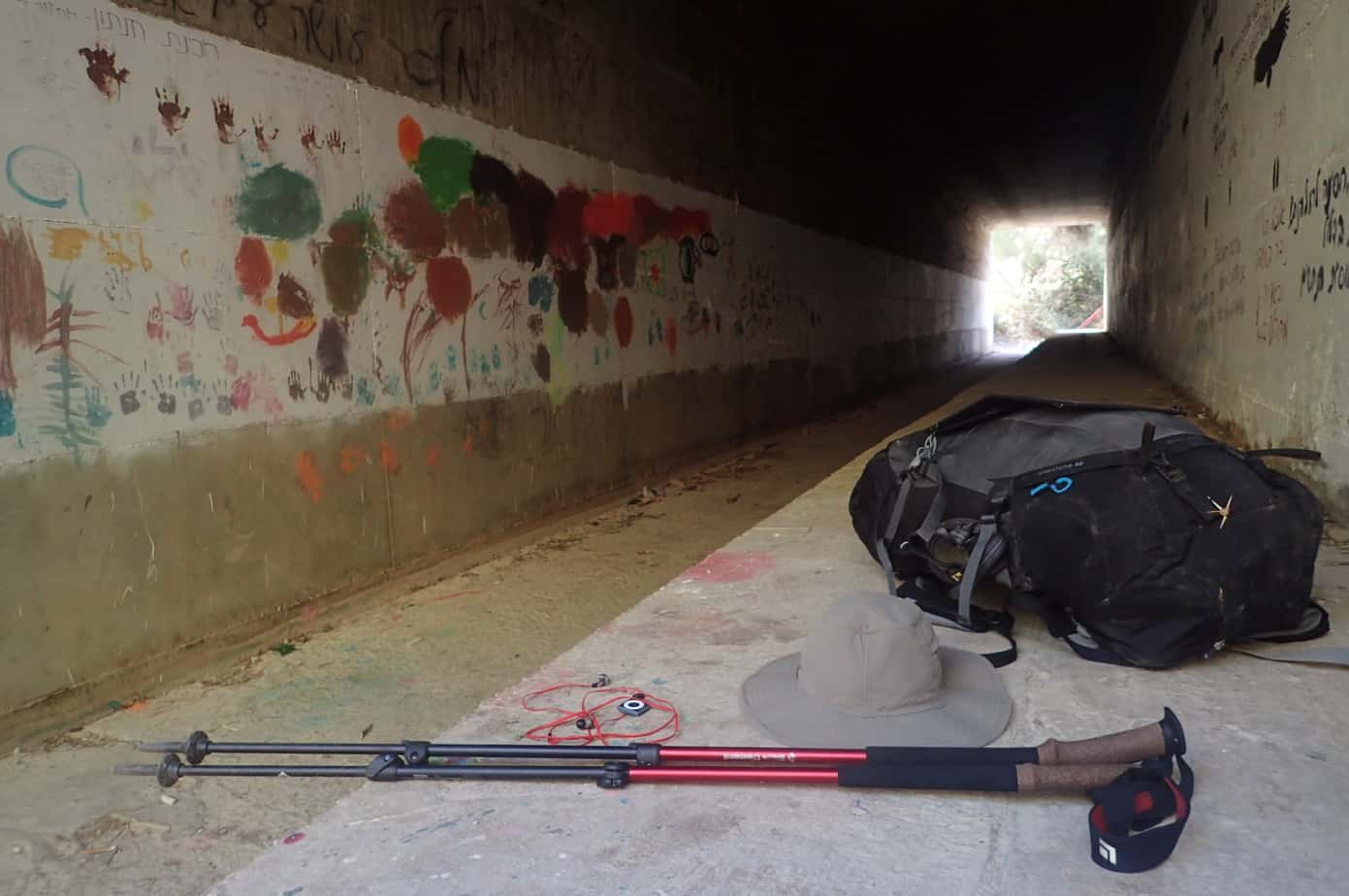 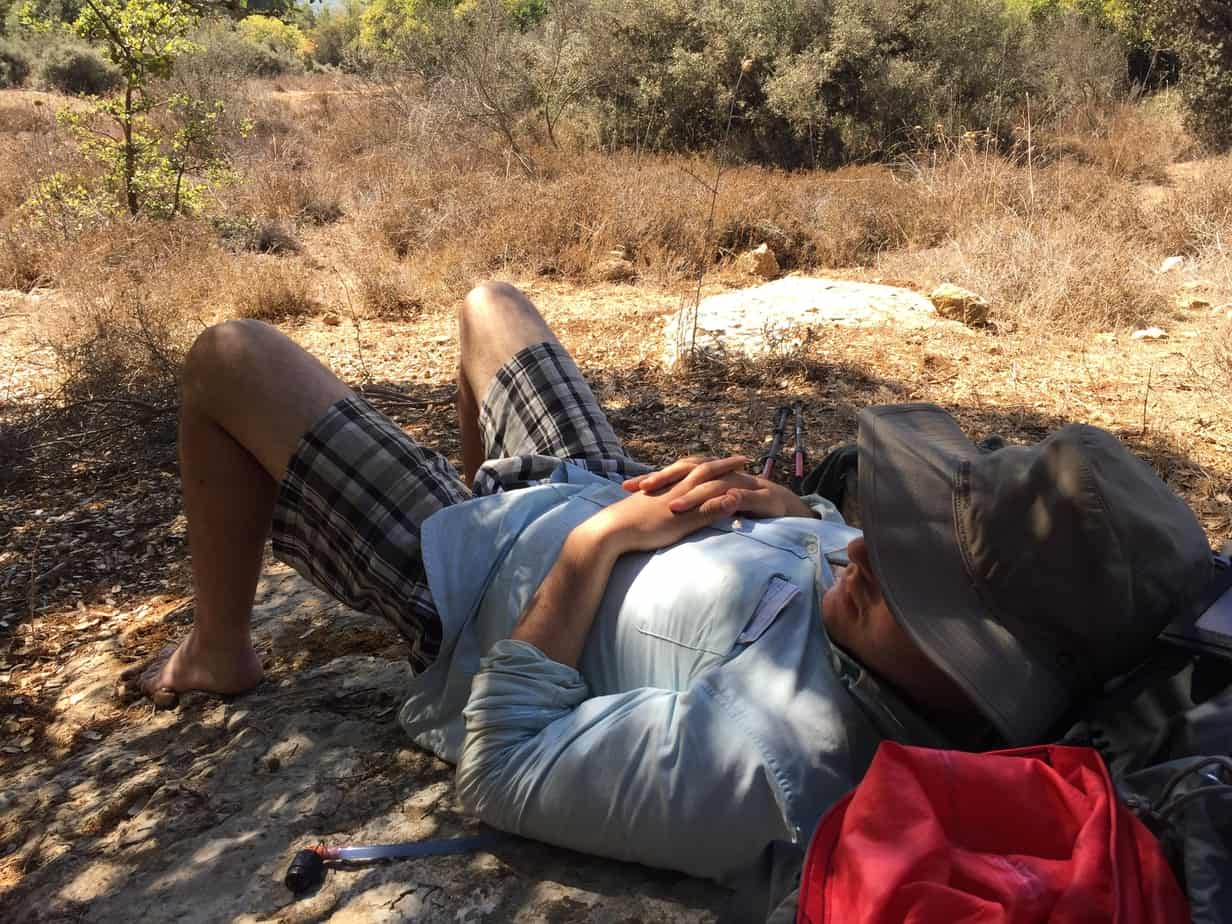 The last part of the hike felt barely manageable and we broke it down with constant stops. Hike upwards for 20 minutes, rest for 10. We rolled into the campsite exhausted. I wondered if this ever really would get easier or if I just wasn’t fit enough for the challenge ahead .

We put up our tent, washed our feet in the tap and fixed the roll mat (always take a repair kit with inflatables) which actually had 7 holes in it! I’m on thorn watch from now on at all camping spots. Dinner was pasta with some stock for flavour. 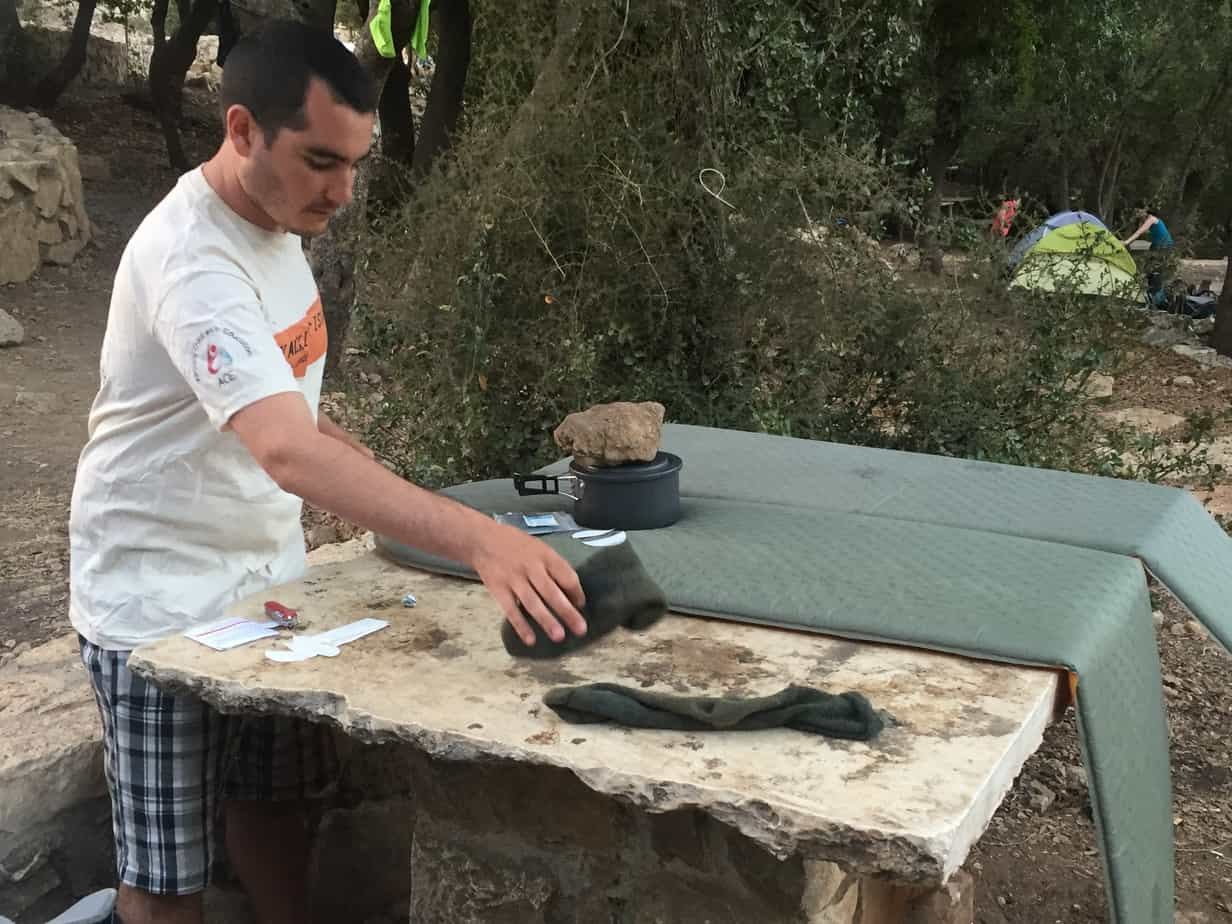 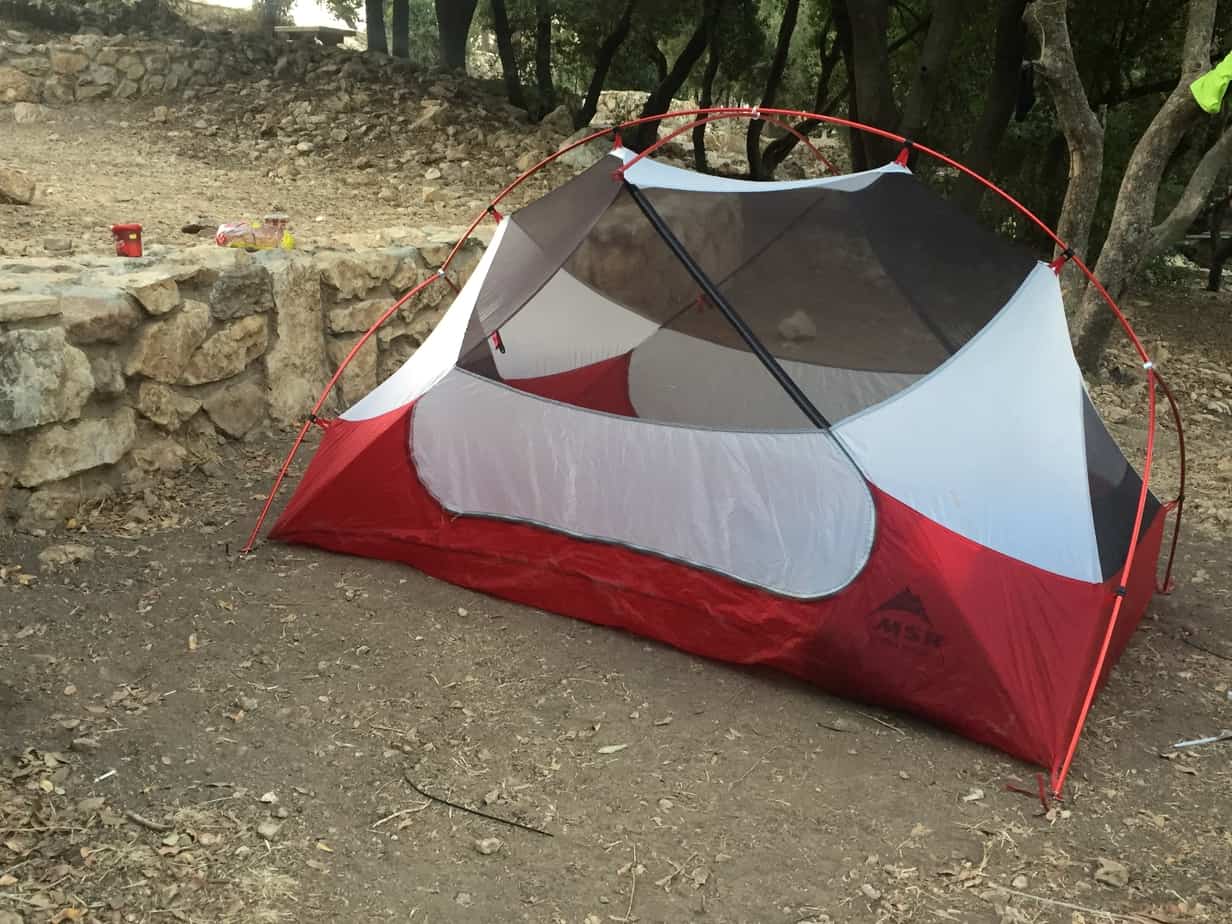 When I threw on my pack, it felt a little lighter. Maybe I was finally getting used to the weight? We hiked up to a view point with our head torches on (the 5am starts were working really well for us). We should have seen the sunrise from the top. What we actually got was nothing but thick white, chilly cloud that made us look like we were in a horror film. 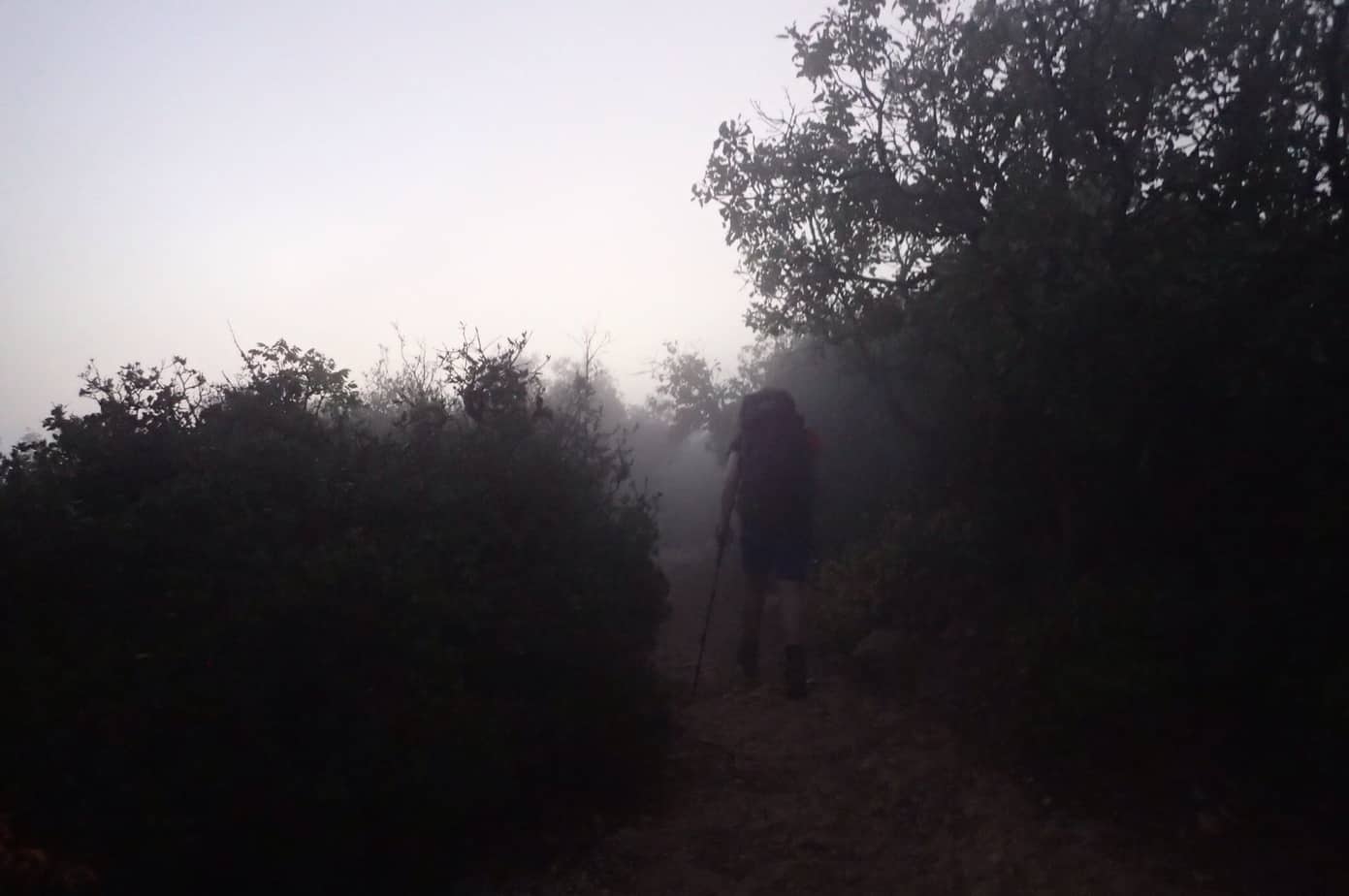 We were joking about how amazing the view was when the white parted and we were greeted with one of the most incredible sights. That shut us up! It was truley spectacular. The peak of Mount Hermon sat in the distance, piercing through a pool of fluffy clouds, the sunrise starting to colour the sky orange and red. We were in the heavens.

I tried to take a picture but the cloud was already moving to cover the view so I didn’t catch it fully. As quickly as it came, it was gone again. Oh well, that one in its entirety was meant for our eyes only…. 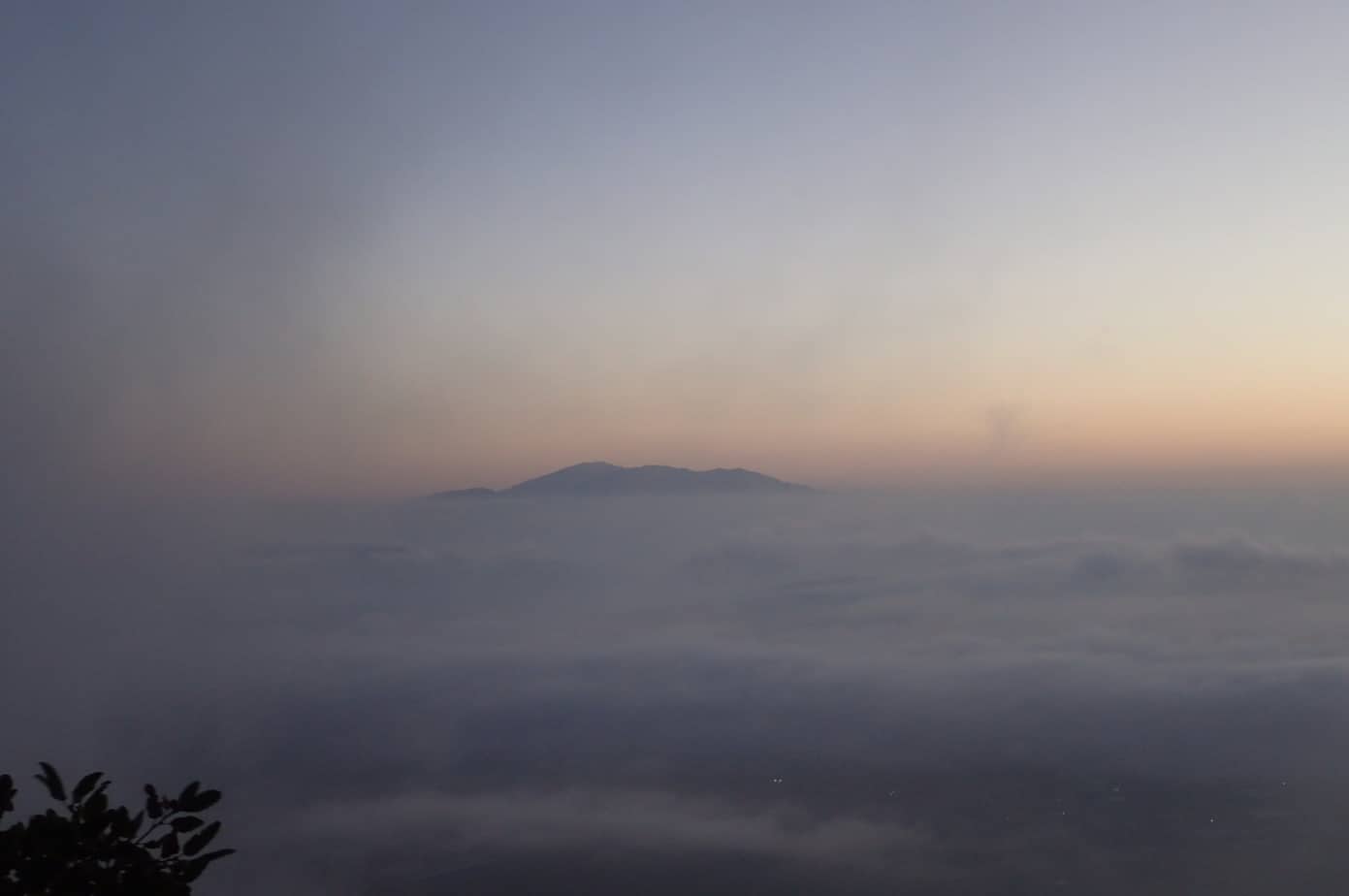 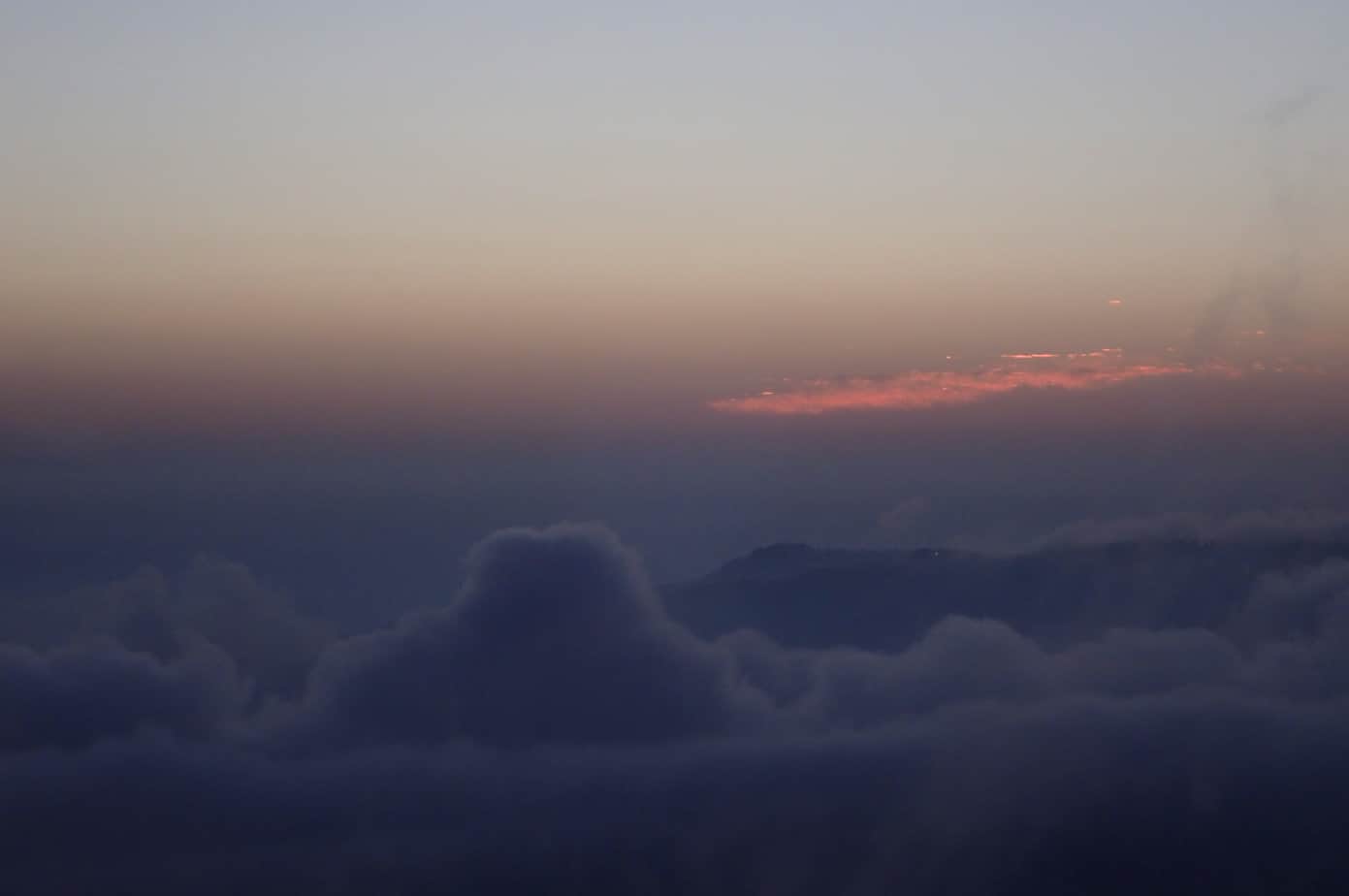 I literally felt the view fill me with energy and set off at a more enthusiastic pace, helped greatly by the downhill track that was flat and easy to follow. We passed some fruit farms – we had seen so many. I may have nicked a small pomegranate which I feel bad about, but it was so good looking and there was so much tempting fruit around us (avocado, orange, grapefruit) I just couldn’t resist any longer. I apologise to the owner although, if it makes you feel any better, I enjoyed every mouthful. It was damn juicy and sweet! It is also the Jewish New Year so it’s traditional to eat pomegranates…I always like to embrace my husbands culture where I can.

Apparently there’s an old Jewish law that says you can pick fruit from a farm but only if you eat it on site….well this one certainly didn’t make it off the grounds before it was devoured!

The fruit was accompanied by our usual breakfast, a few handfuls of granola. 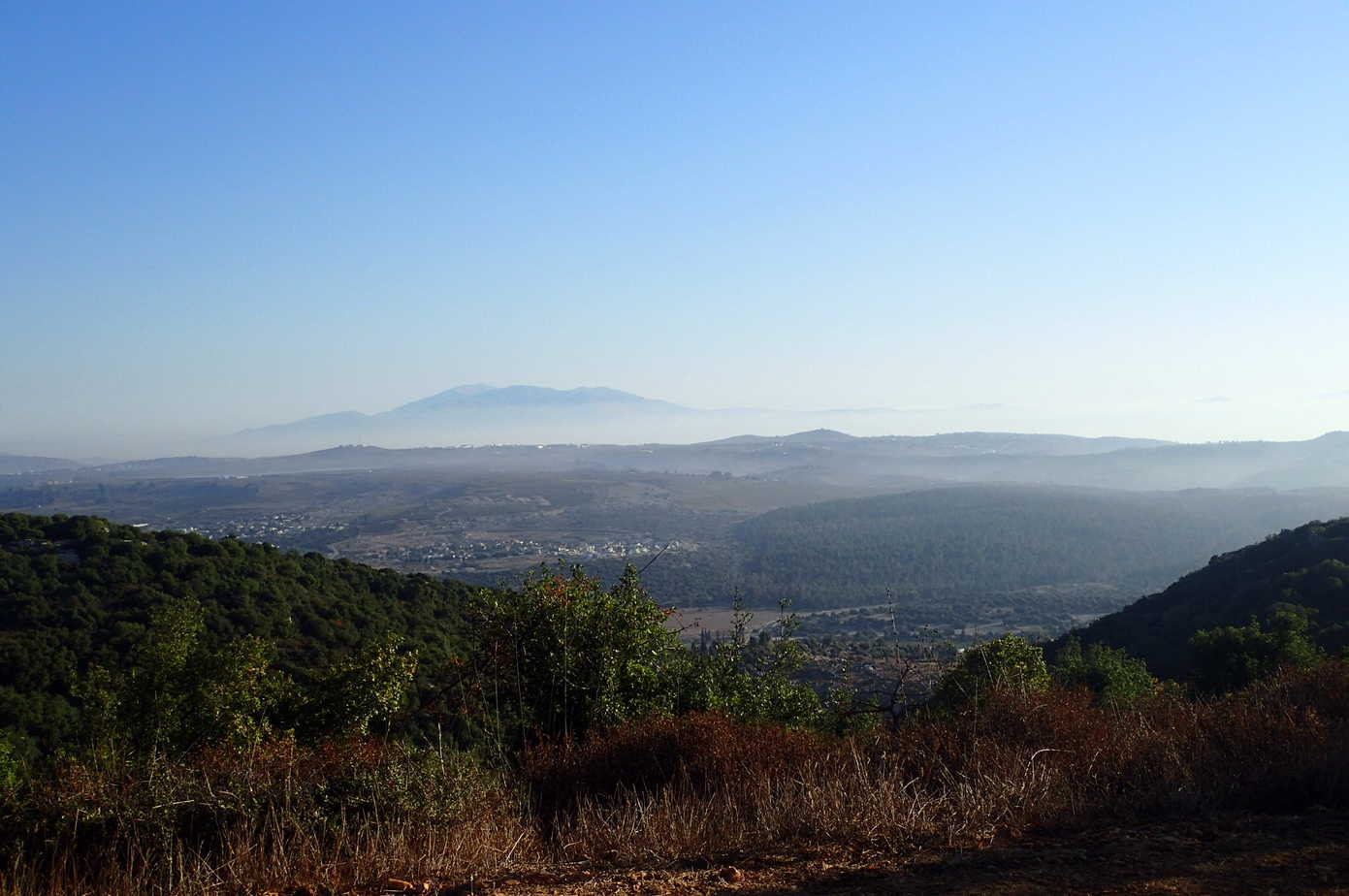 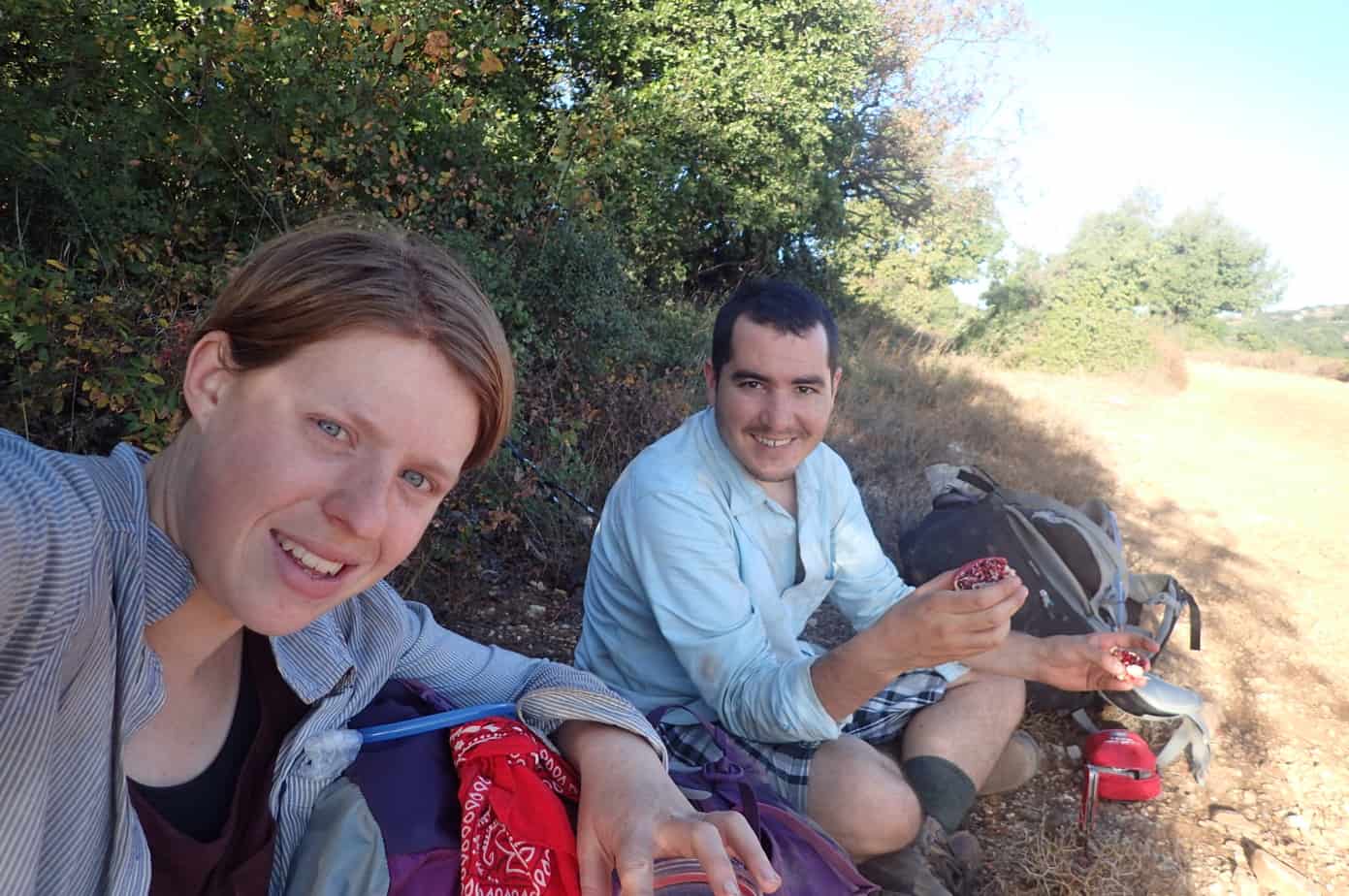 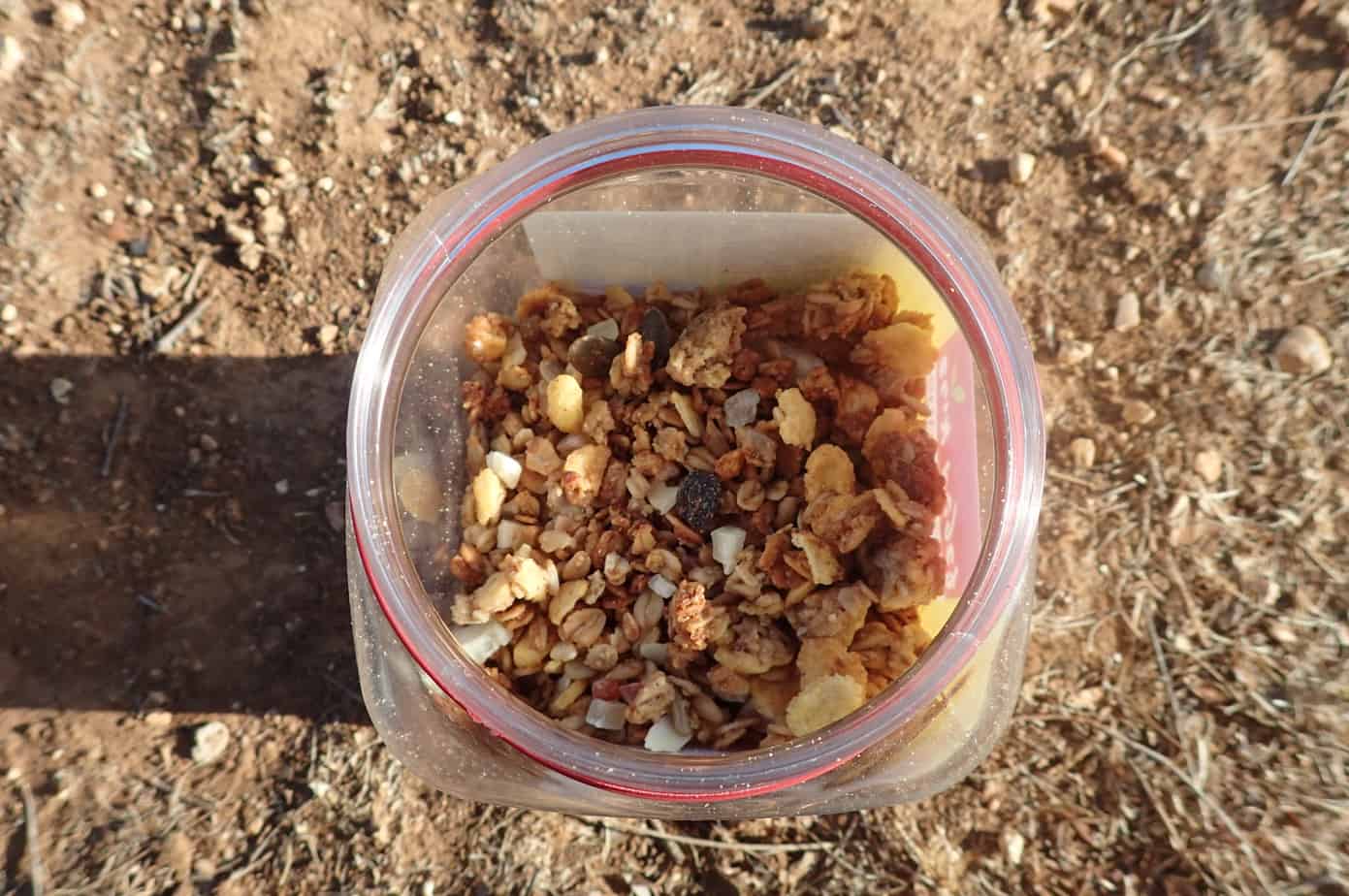 We continued on, up, down…and under. 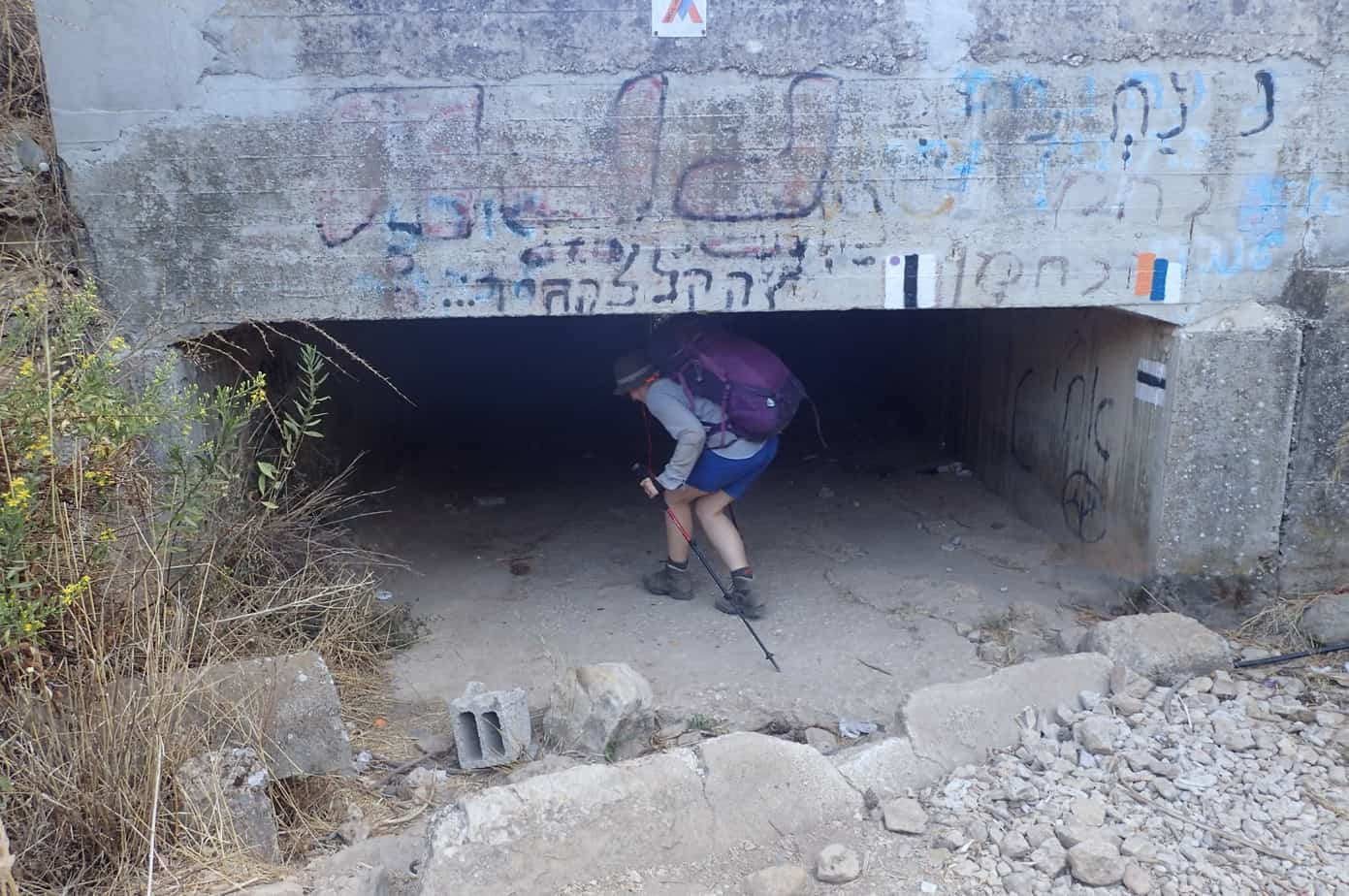 It was past 11 and I was at that sweaty stage again, baking in my clothes and panting like a dog. Then I heard something…running water. Only someone who has spent time in such a hot dry place can understand how amazing that sound is to your ears.

We followed the stream and it revealed an incredible little spring. Crystal clear with fish and a waterfall…all for us!

We threw down our packs, stripped off our clothes and jumped in the pool. Well, I did a bit of screaming and flapping first…not only was the water FREEZING, but the fish were huge and I was convinced they were going to try and nibble my feet. Nothing was keeping me from going all the way on though.

The dust all washed away, my chapped lips and dry skin soothed and I was left feeling refreshed. This was perfect for my throbbing legs and we spent as long as we could sitting by this tranquil paradise. 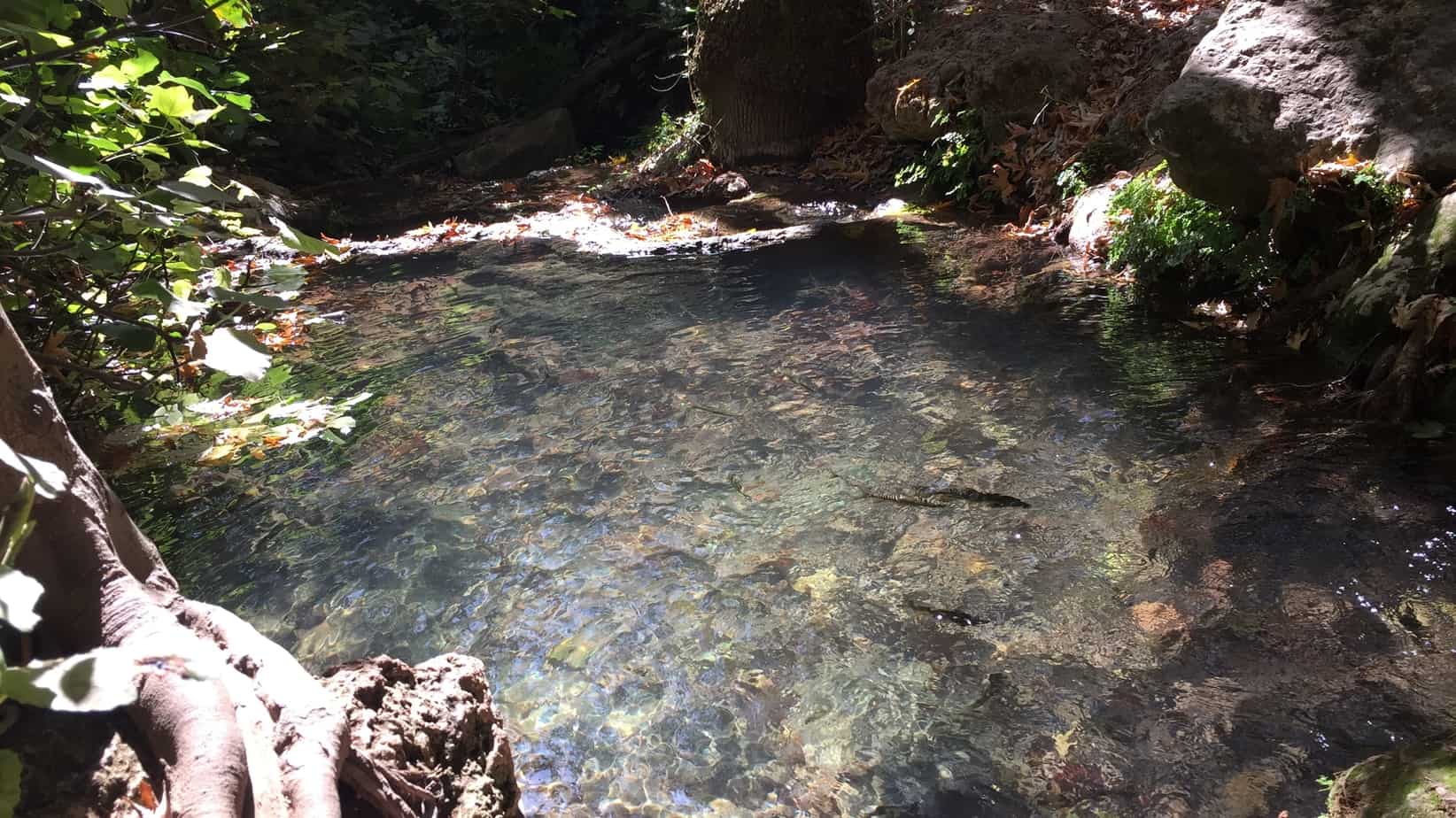 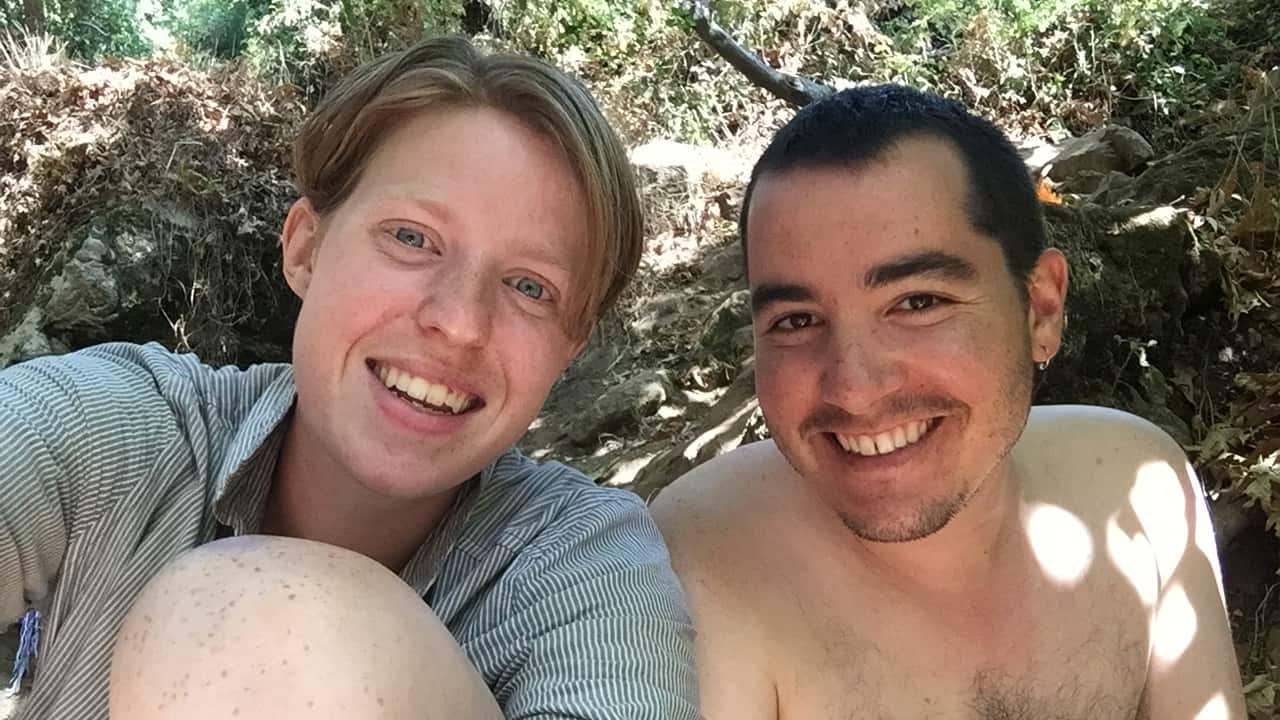