What was it like surviving 5 days in the Woods? 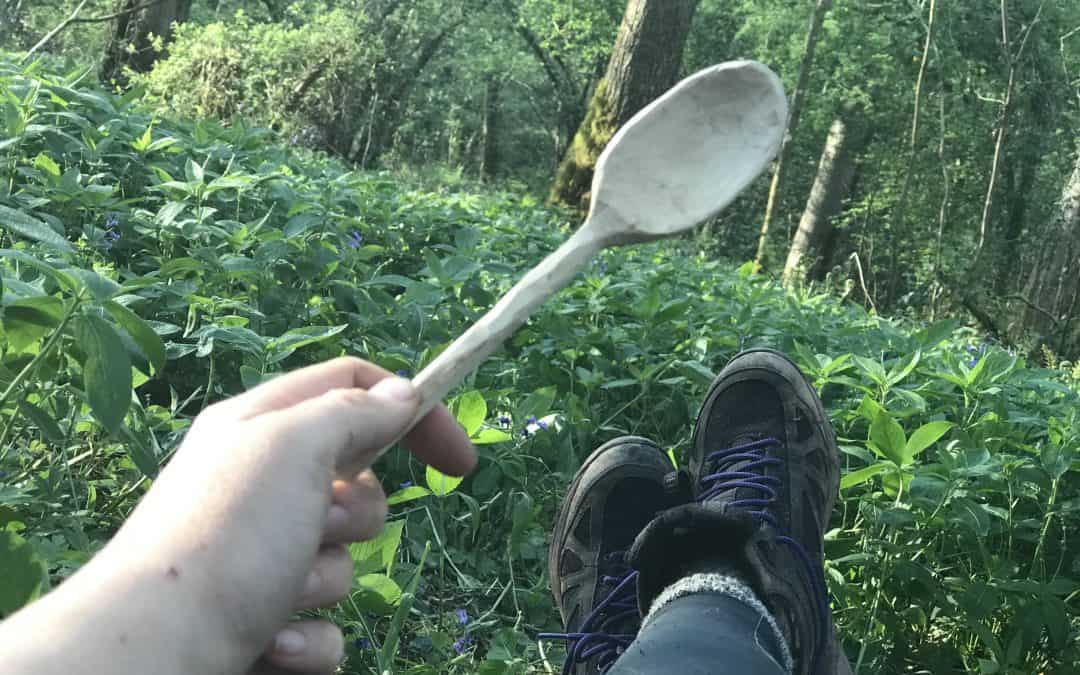 So many adventures focus on travelling far, high, long or fast but I really wanted to create a Love Her Wild adventure that was accessible to everyone regardless of the distances or speed you could move. So I came up with ‘the Woods’! The concept was simple. 10 women would spend 5 days on a survival challenge in the woods with just very basic gear.

I wrote a blog inviting women to apply and shared it in the Love Her Wild community. A few weeks later I had over 140 applications in my inbox. Just like with the Everest adventure, it had been an impossible task narrowing that down with my volunteers but we had a clear mission in mind – we wanted a team that represented women from all walks of life and all abilities.

It’s fair to say the final team was a mixed bag. Our ages ranged from 21 – 67. Our experiences were varied and we brought different challenges. We had someone with Parkinson’s and someone on a mission to prove that being bigger didn’t exclude you from the outdoors. Although we had a bushcraft expert, we also had 2 members who’d never even camped before. You can read more about the 10 women who made the final team here.

Could this random mix of women really get on? 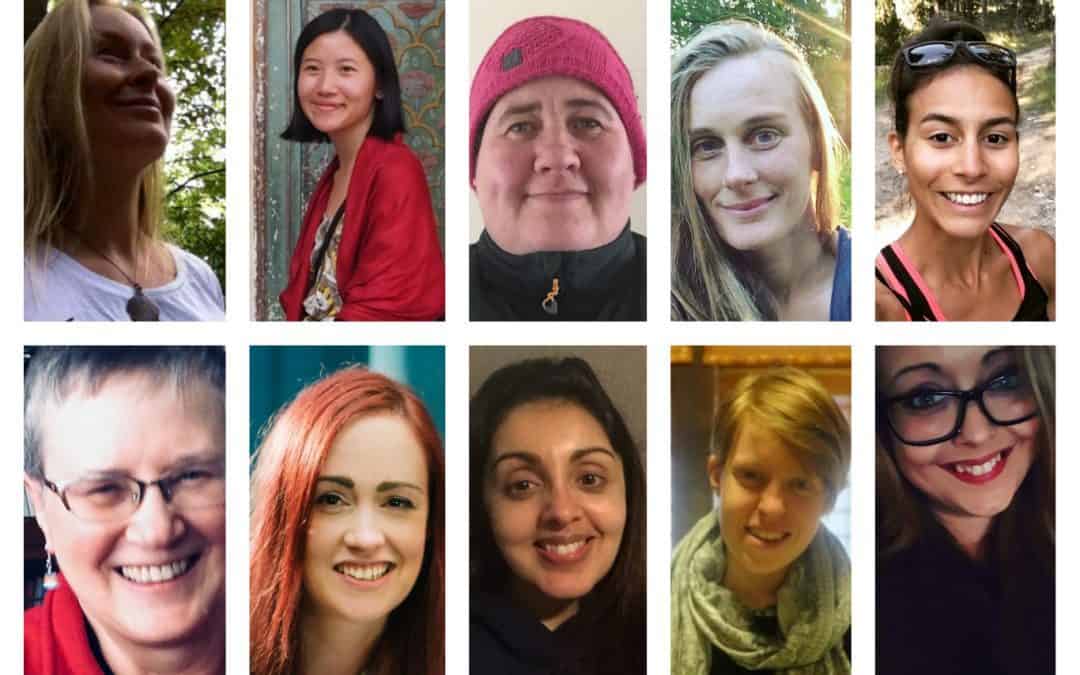 Meeting for the first time

The night before our expedition we all met at a guesthouse near to our chosen woodlands in Chepstow for the first time. The guesthouse owner was somewhere between amazed and completely bemused by our challenge. 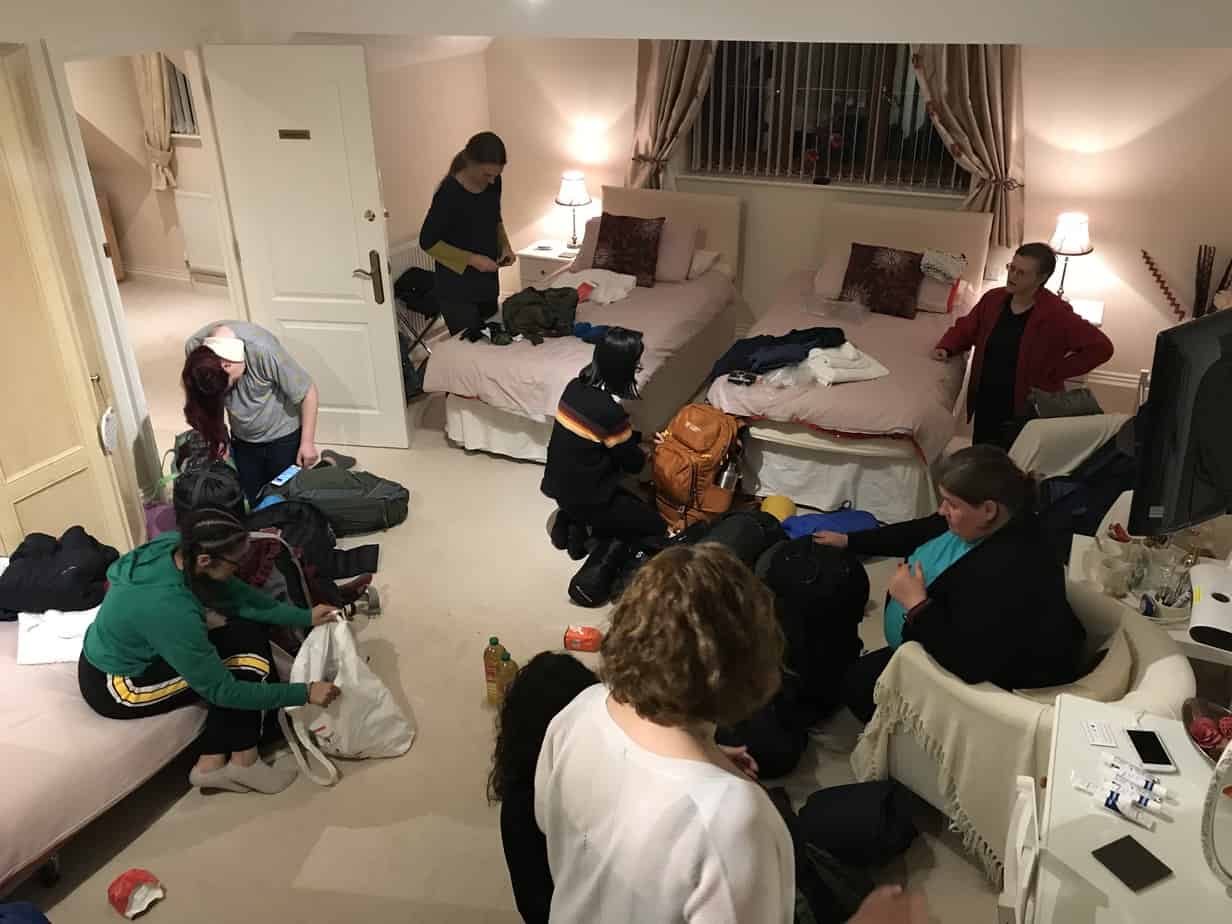 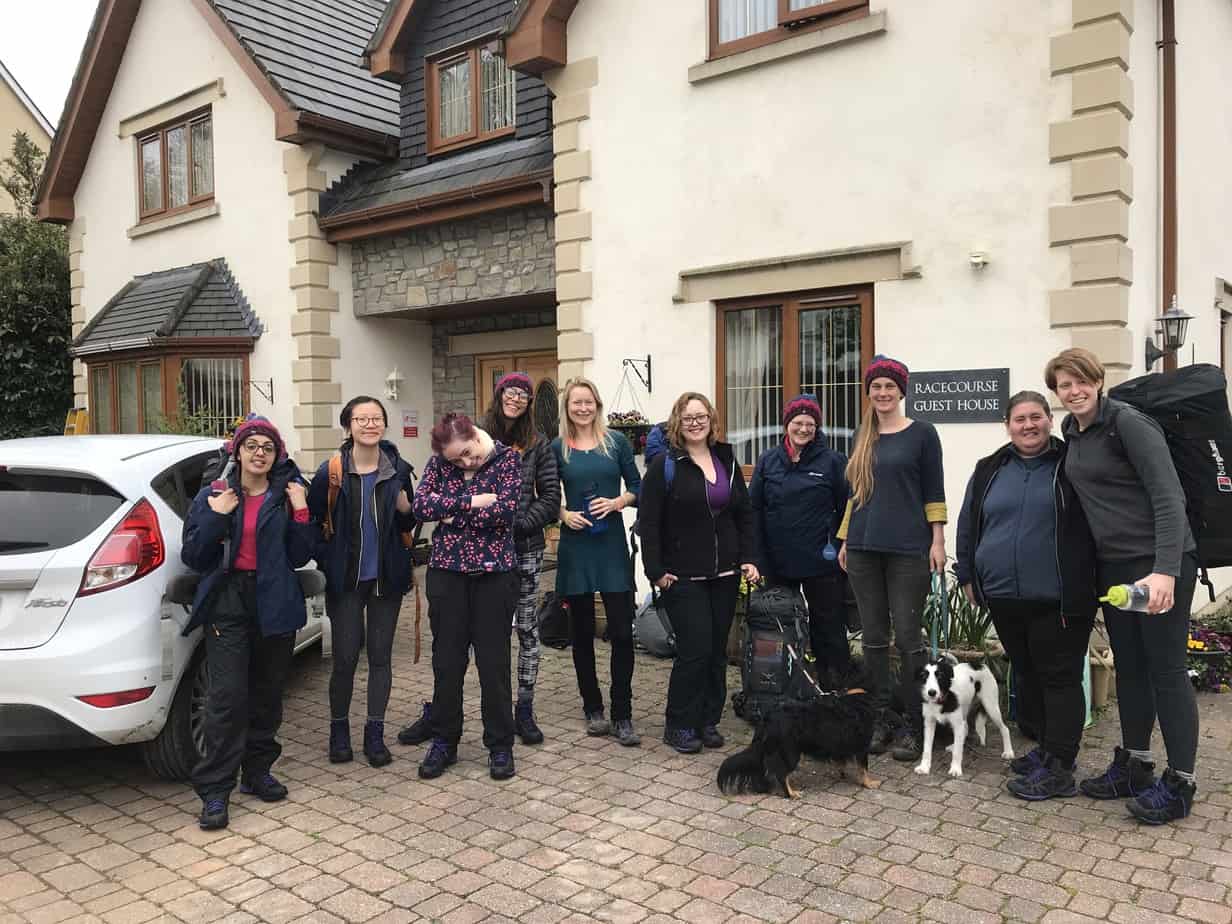 Up until this point, we had just spoken a few times via a Facebook group to lay down the rules of our challenge and also to decide what our kit list would be. We sorted through our bags and headed for our last supper in a nearby pub and did the sensible thing – stocked up on food!

Everyone was getting on really well and within 10 minutes of the food arriving all my anxieties had faded. Always my biggest worry with groups is that dynamics won’t work but I knew we had chosen a great team. Now I was just excited to get going.

The group seemed quiet in the morning and a little unsure of what exactly we’d signed up to. We entered the woodland and locked the gate behind us. Here we left the cars and set off into the Woods loaded with our kit and food supplies.

20 minutes up the path we decided to stop, drop our stuff and split off into smaller groups to explore the woods. We had just 2 litres of water with us to start so a priority was finding a water source and a suitable place nearby to camp.

My recce group found just that. It was a section of the woods where the trees thinned. The ground was soft and there was a stream nearby. It was perfect! 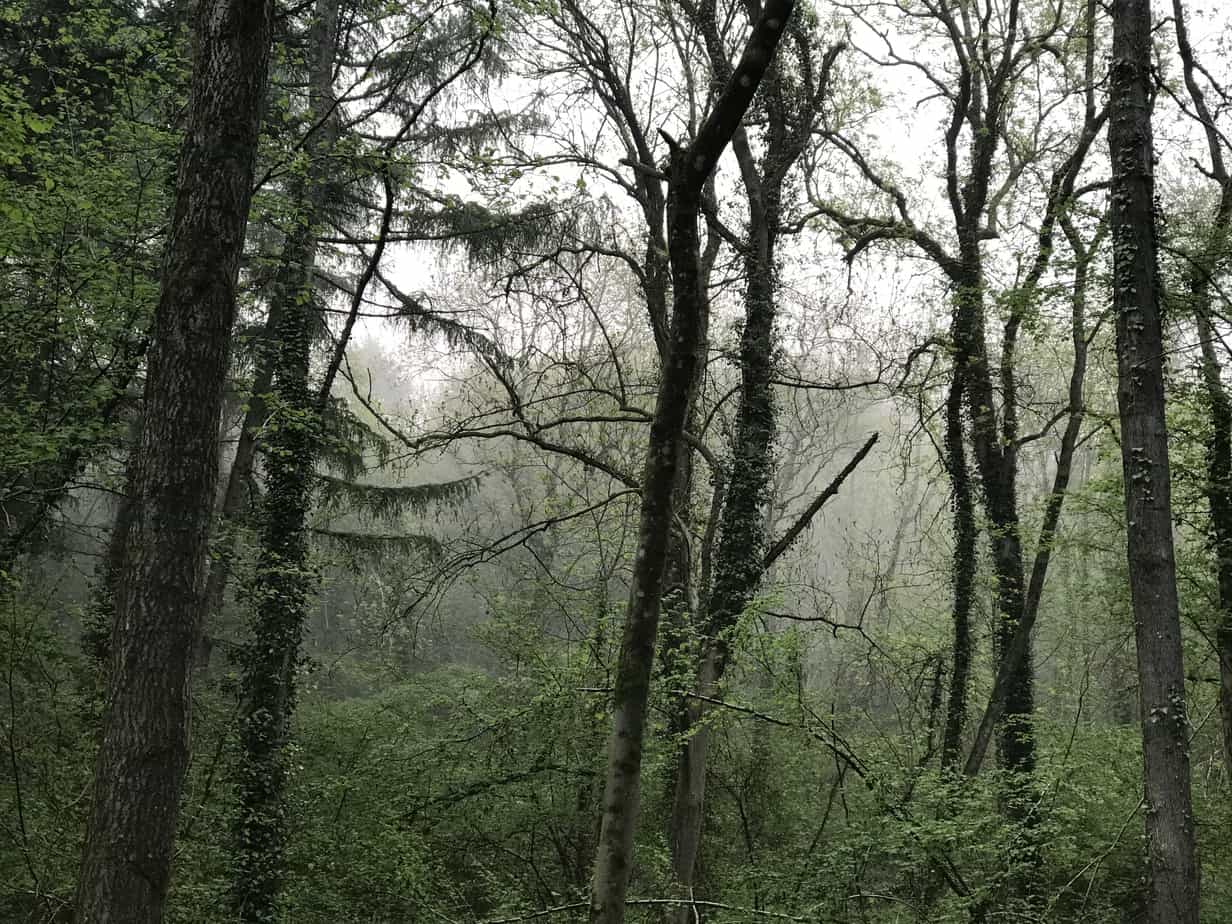 We got the fire going (which took a lot longer than we expected without proper kindling and a lighter) and started gathering firewood. A couple went off to fetch water while a few more set about inventing (a rather ingenious!) stand for the pot which even allowed us to comfortably raise and lower the pot for changing temperatures. 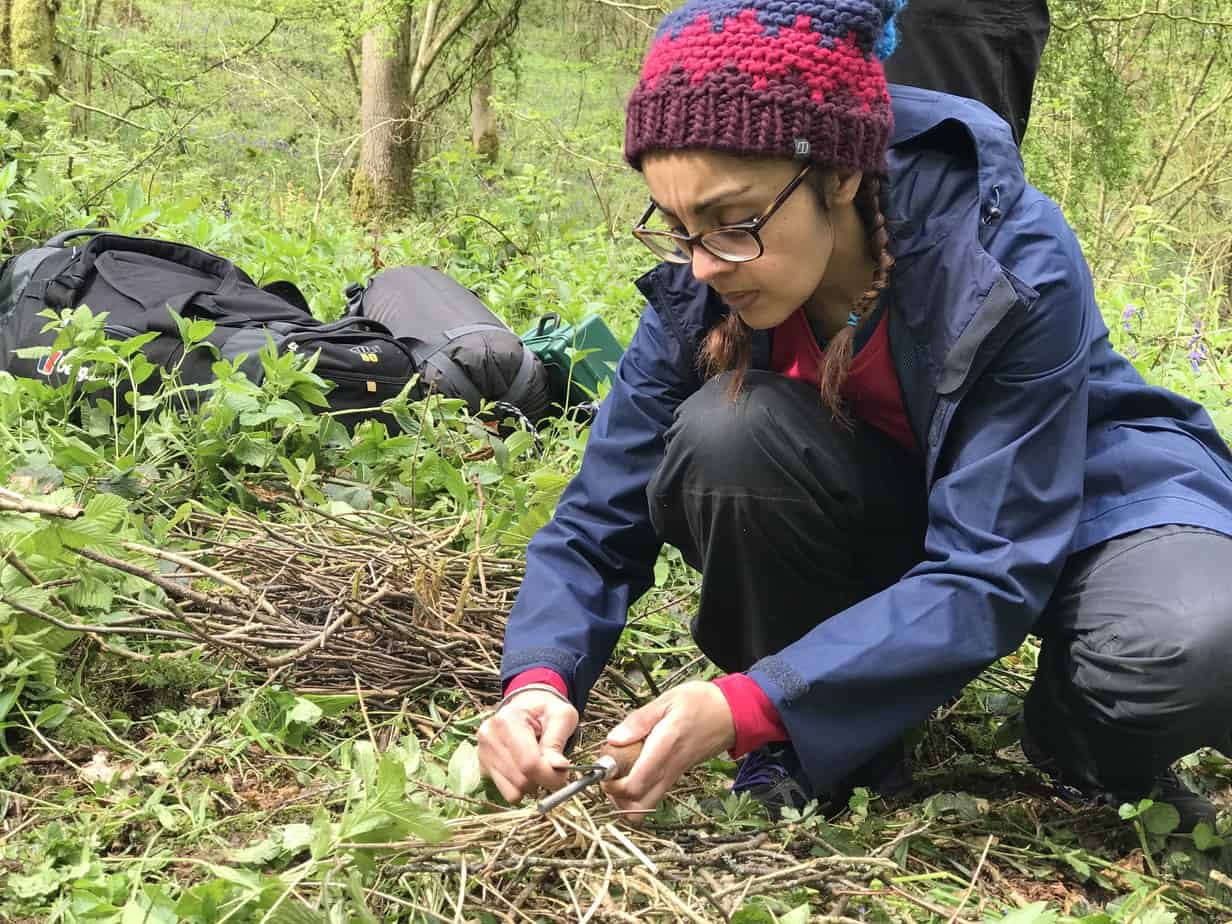 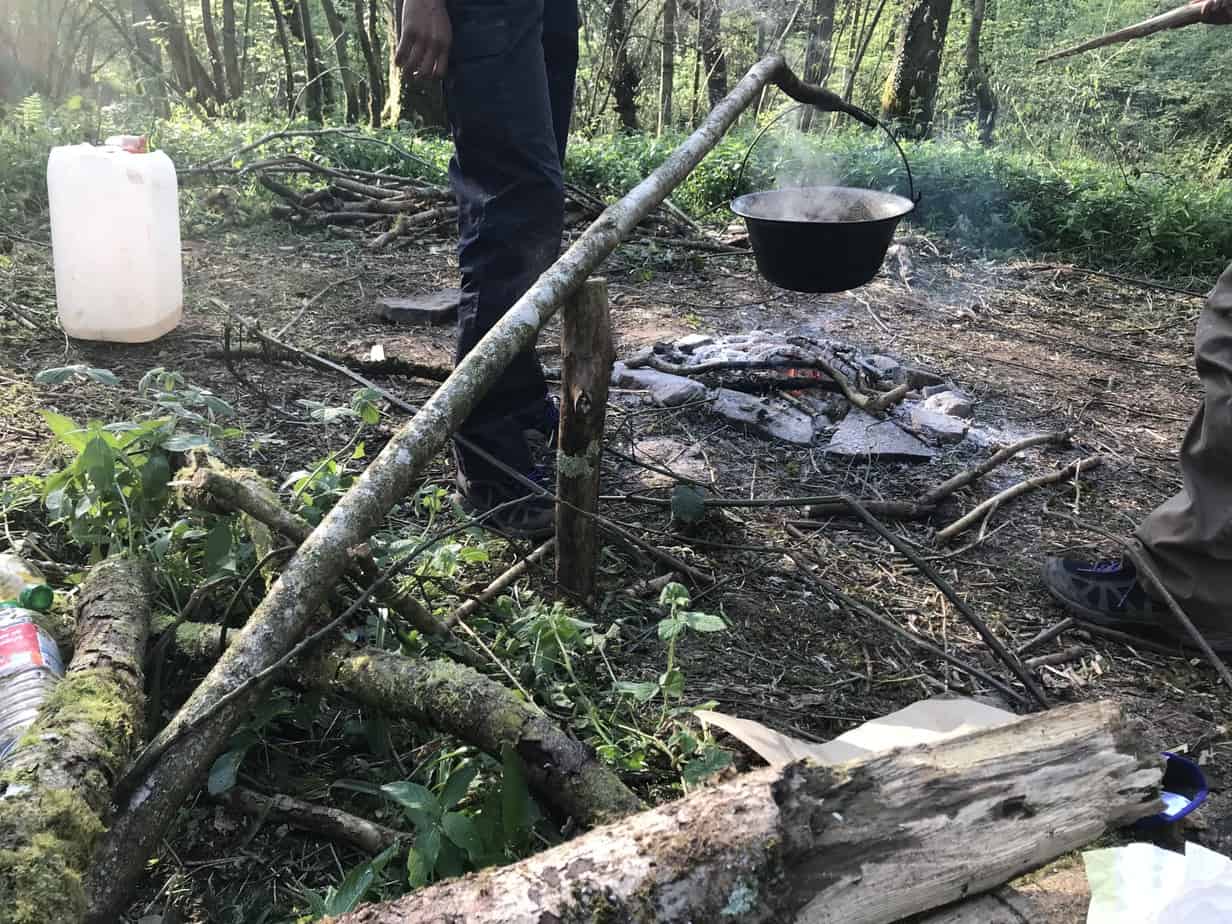 Getting drinking water was a slow process – collecting the water for boiling, then filtering it, all the while keeping the fire topped up with wood. There were a few times in the first few days we ran out and were dehydrated but we soon found our rhythm. 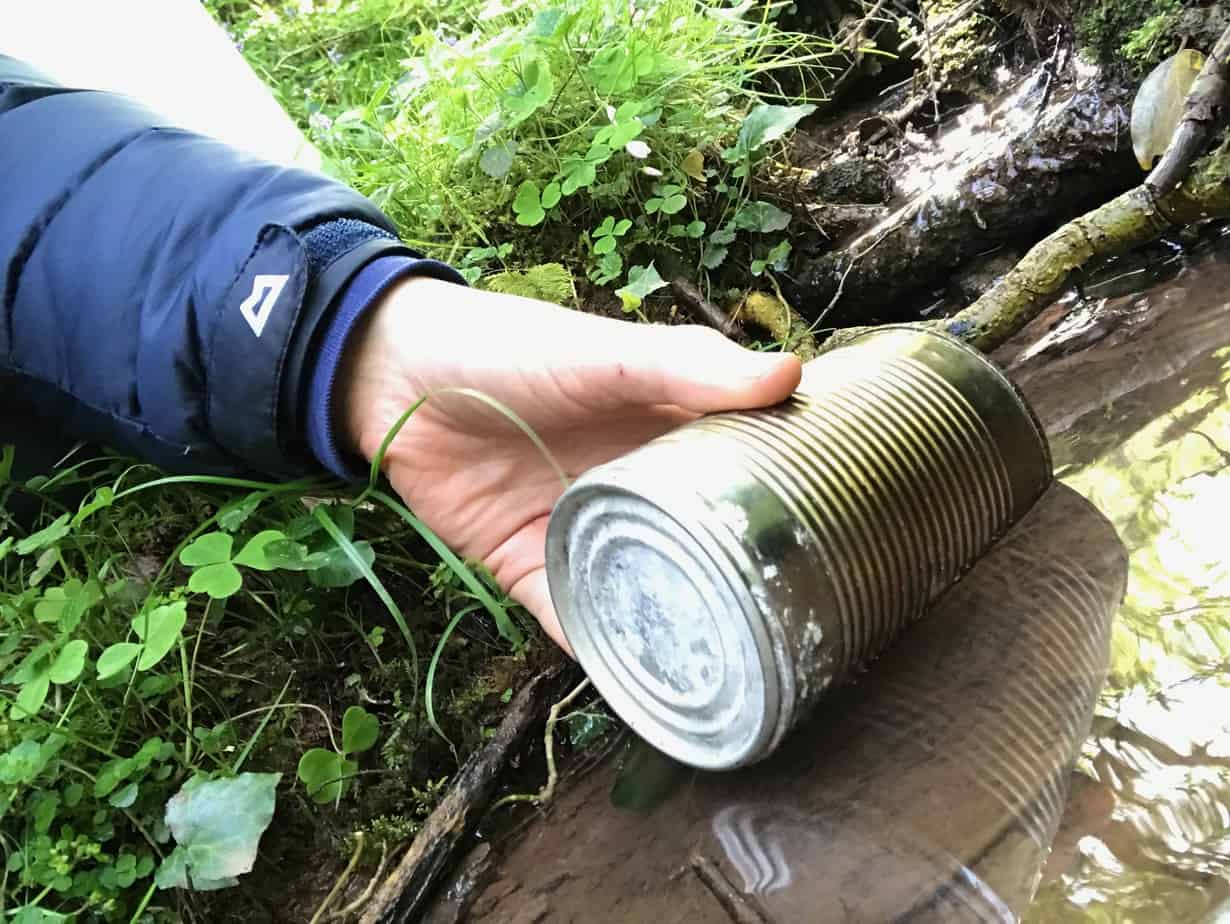 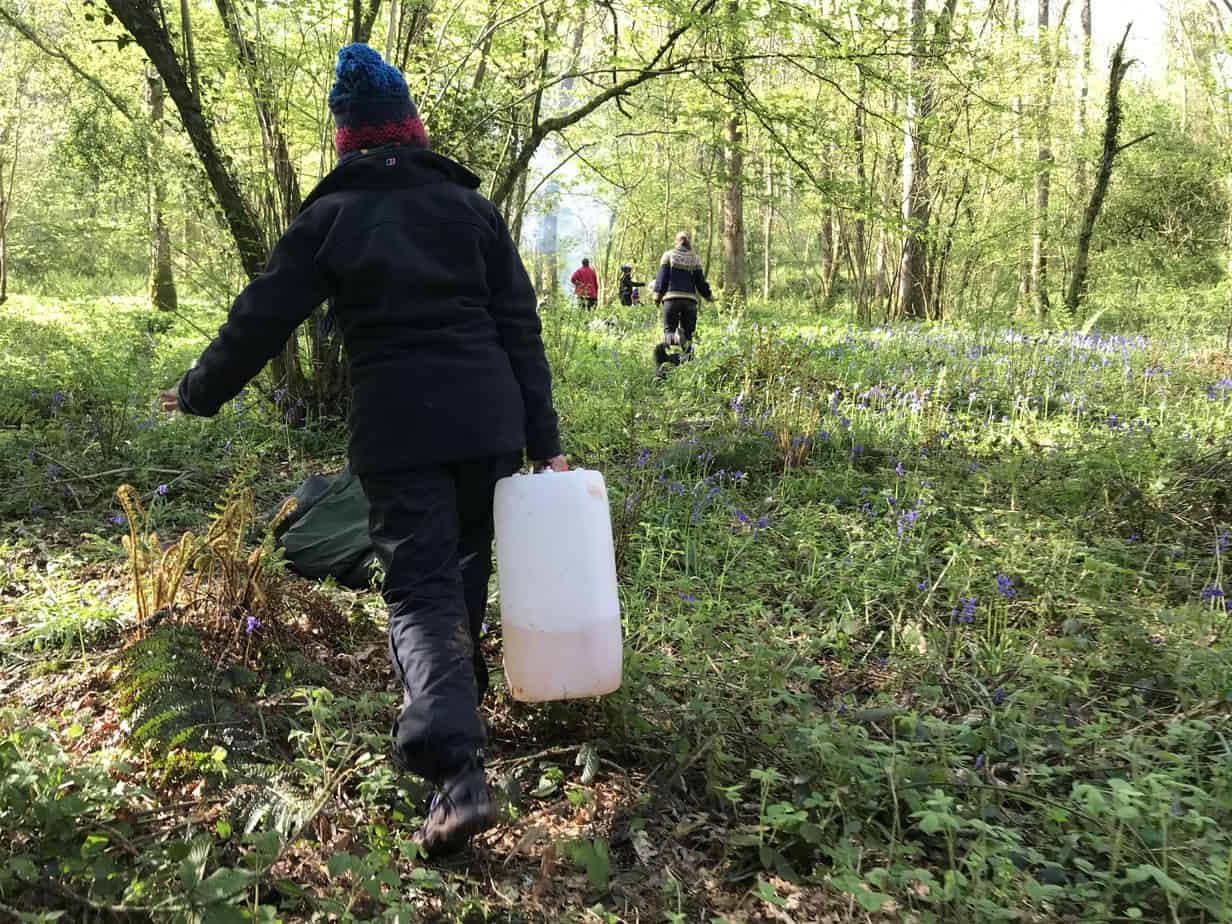 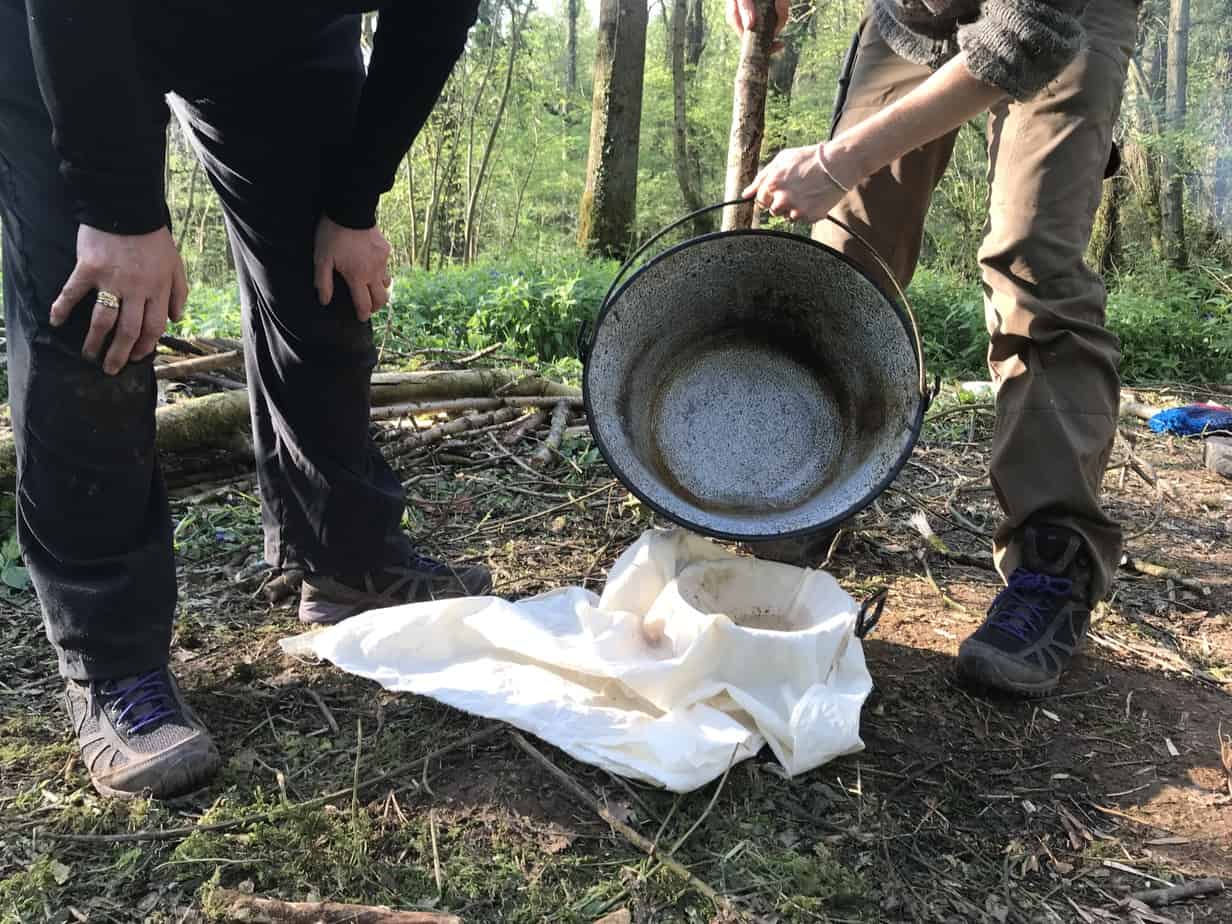 Going to bed on night one felt really strange. We were blessed with the most amazing hot weather so we didn’t bother with shelters. Instead we each found a spot that we liked and just laid down in our bivy bags. I was amazed by how much sleep I managed to get without a roll mat. Sure, it wasn’t the most comfortable, but my soft muddy section was ok at least for the first few days. Eventually, the not having a roll mat started to hurt my back and hips…a common complaint amongst the group.

I lay for a full hour before falling asleep just looking at the trees, listening to the birds and enjoying the fresh air and thinking this was just bliss! 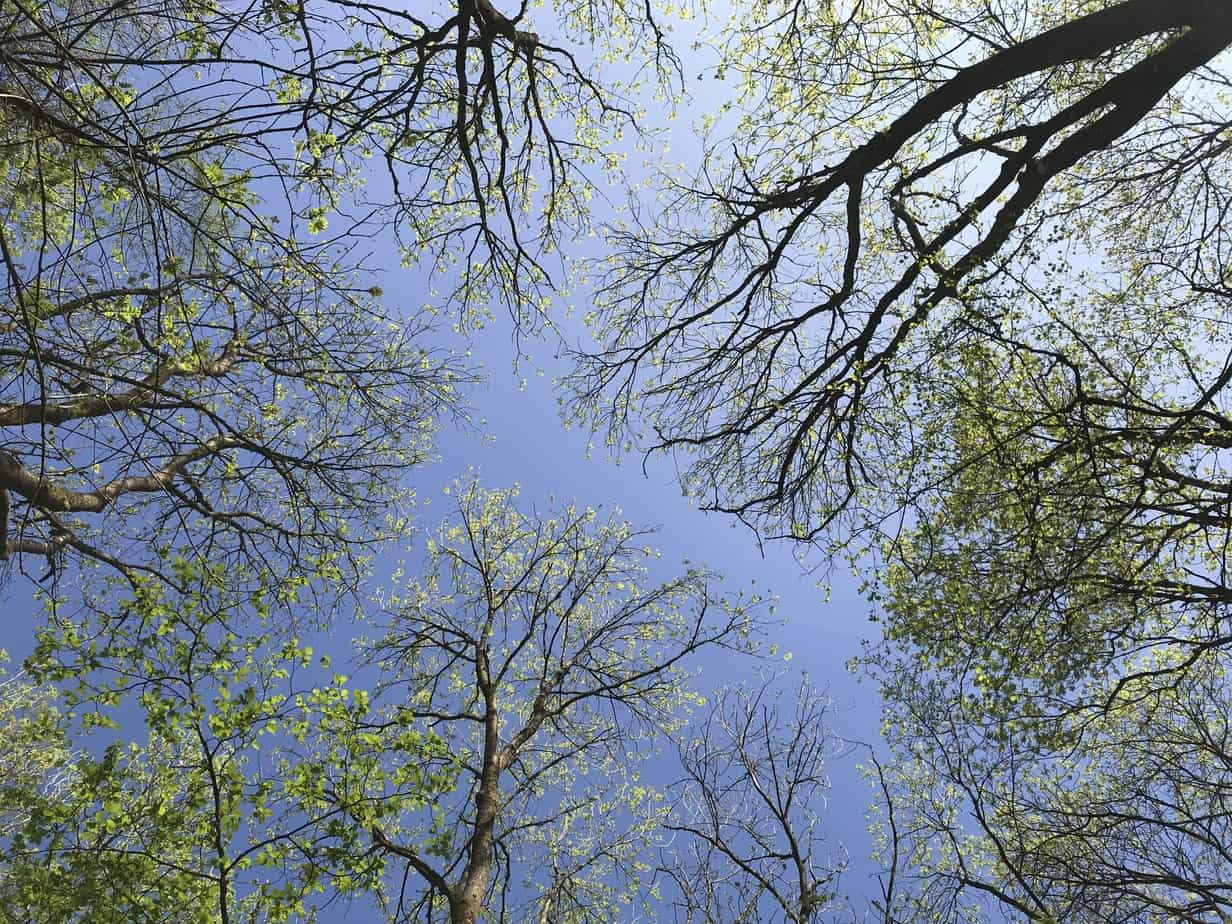 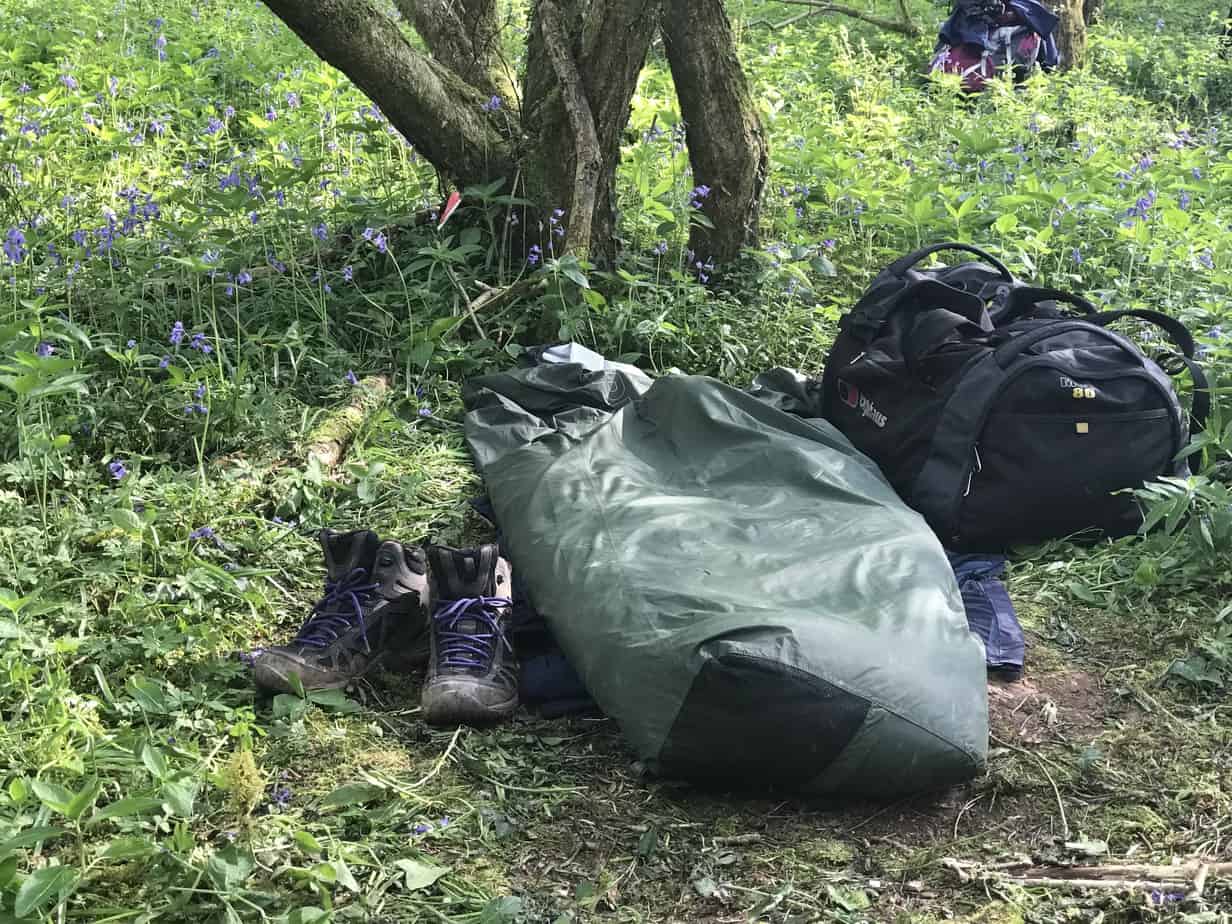 I had a horrendous headache on day 2. We have zero salt and sugar in our diet and were just survivng on 541 calories each a day (although it ended up being less as by the end we couldn’t face bland rice anymore). I think my body was having serious withdrawal systems. Collecting firewood and cooking seemed like a real chore. And I wasn’t alone – most of the group had headaches that day. 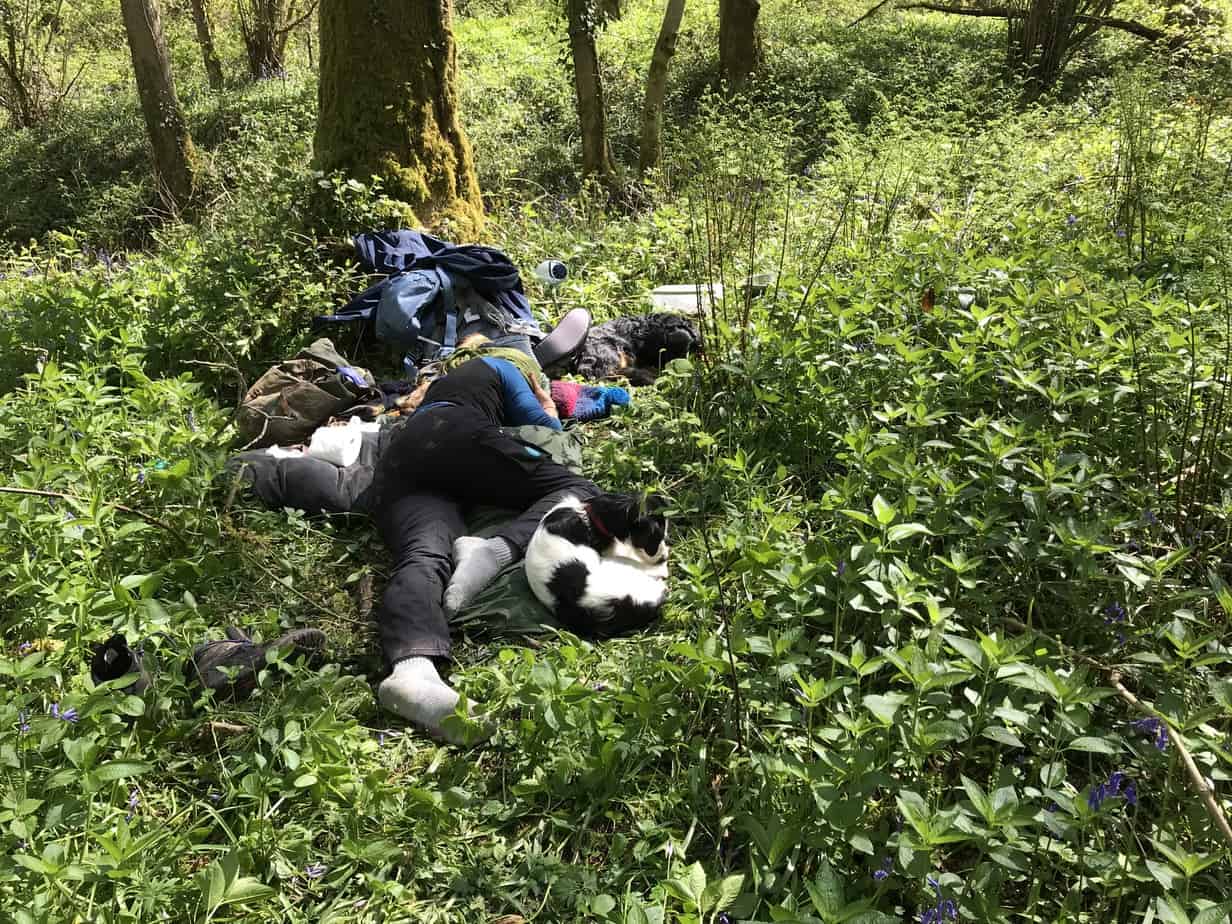 The fatigue and tiredness never went but by day 3 my body was adjusting and coping better with the lack of food and flavour. Hunger was definitely my biggest challenge though and was keeping me at a level of discomfort. We attempted to spice things up with foraged flowers, spices and battered dandelions but nothing was doing it for me. 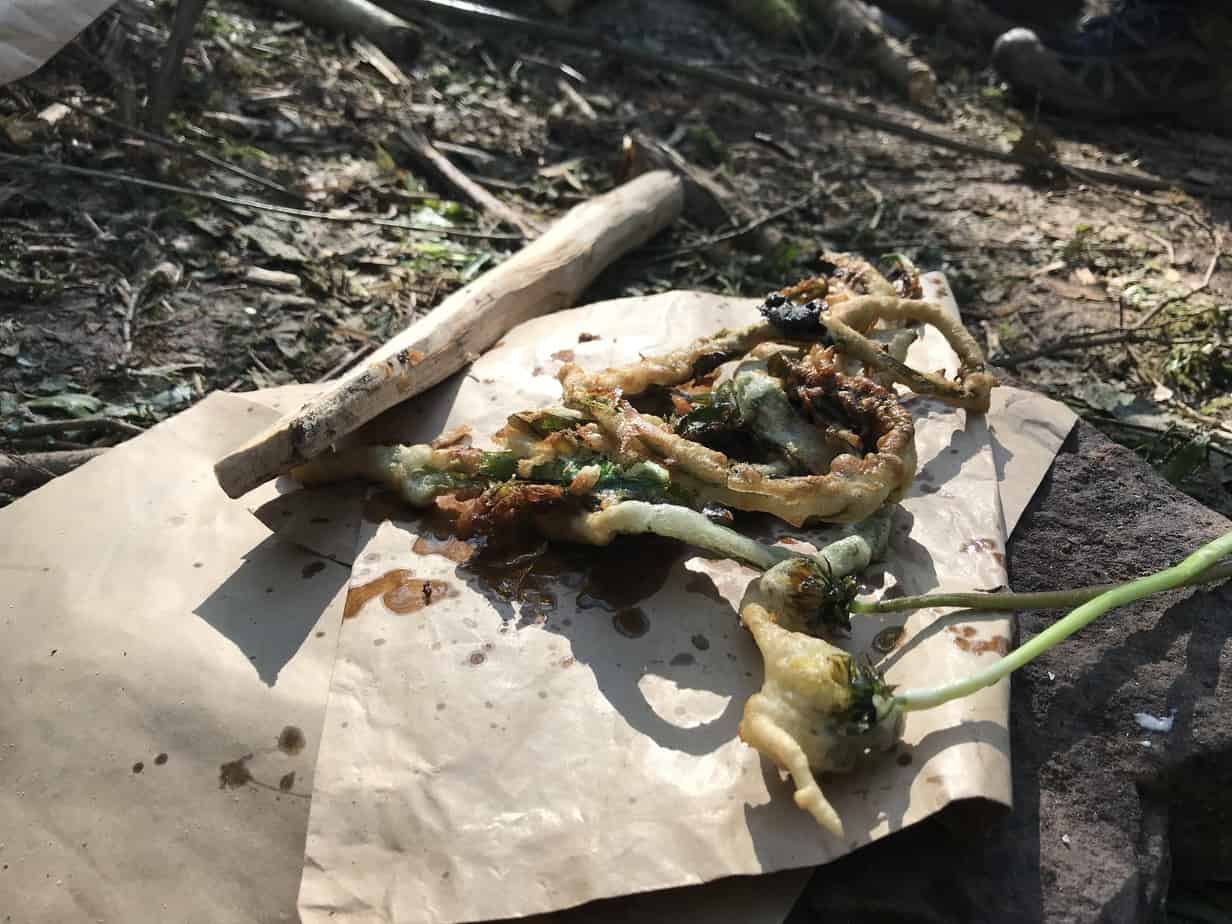 In a way, I kind of liked the fatigue as it really forced me to stop, especially if I started to feel light headed. The afternoons in camps were for siestas. We would drift in and out of sleep, chatting (80% of the time about food!) or working away carving out spoons with my MoraKniv or lazily tending the fire. 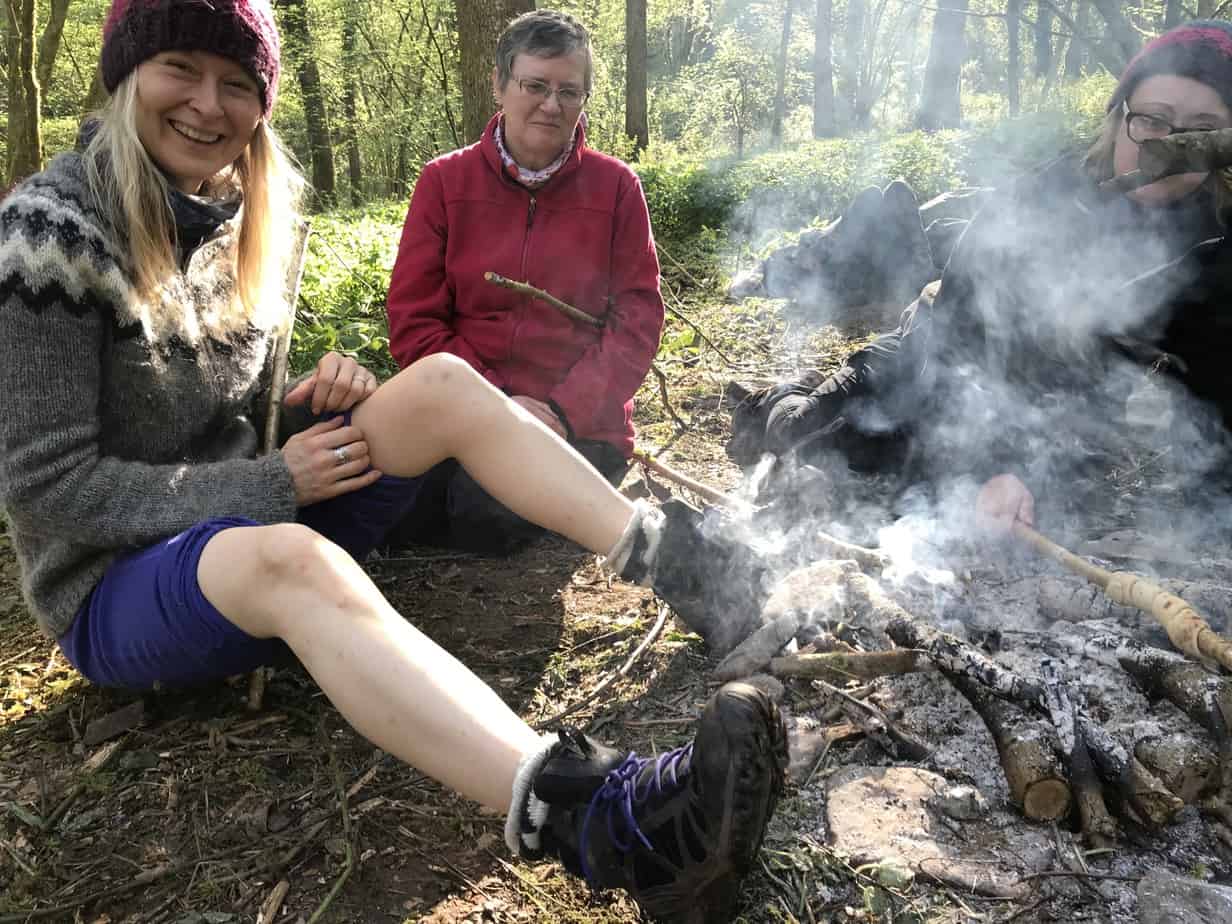 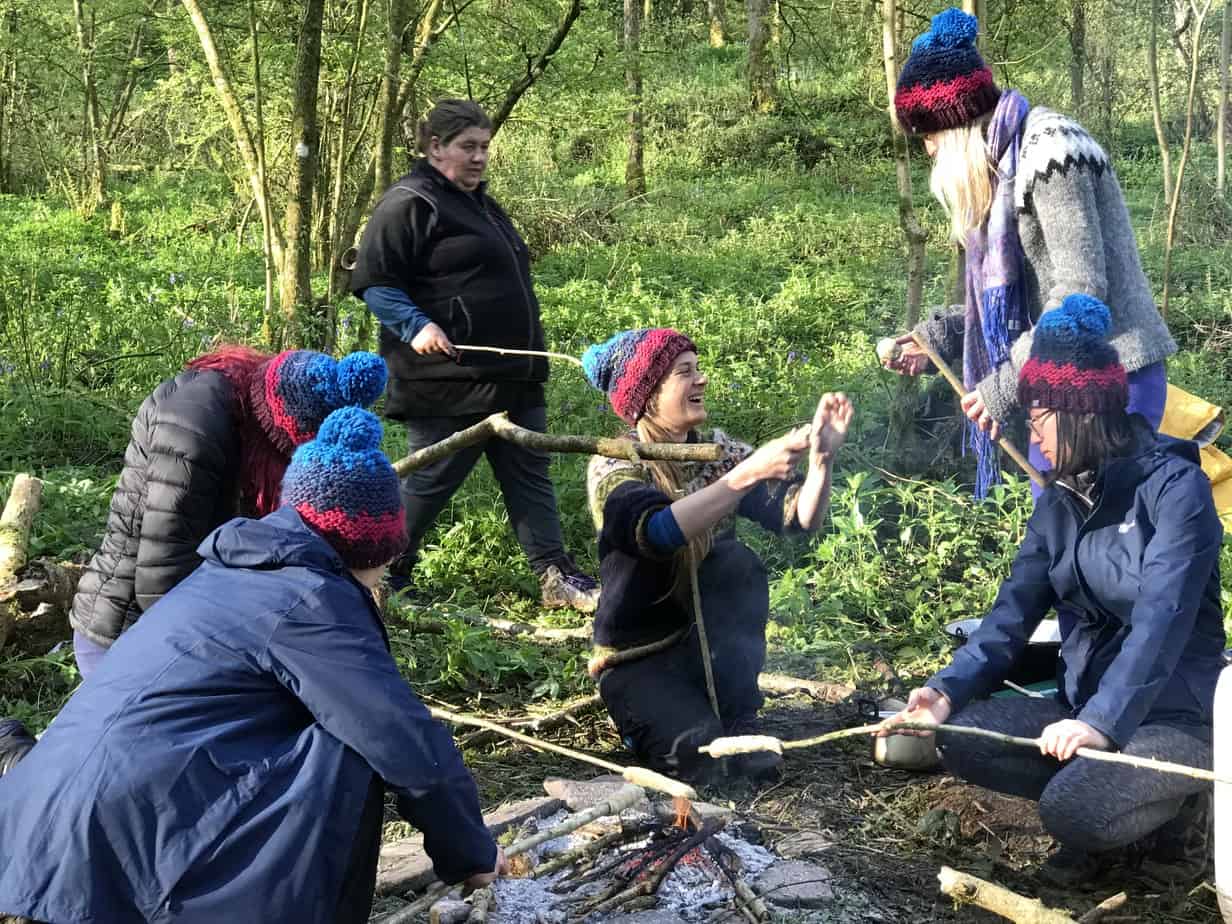 I was sure we would need a leader or some kind of system in place to make this challenge work but neither of those happened. Instead, the jobs just got done and decisions quietly made as they needed to. The group was kind and supportive and it all just worked. 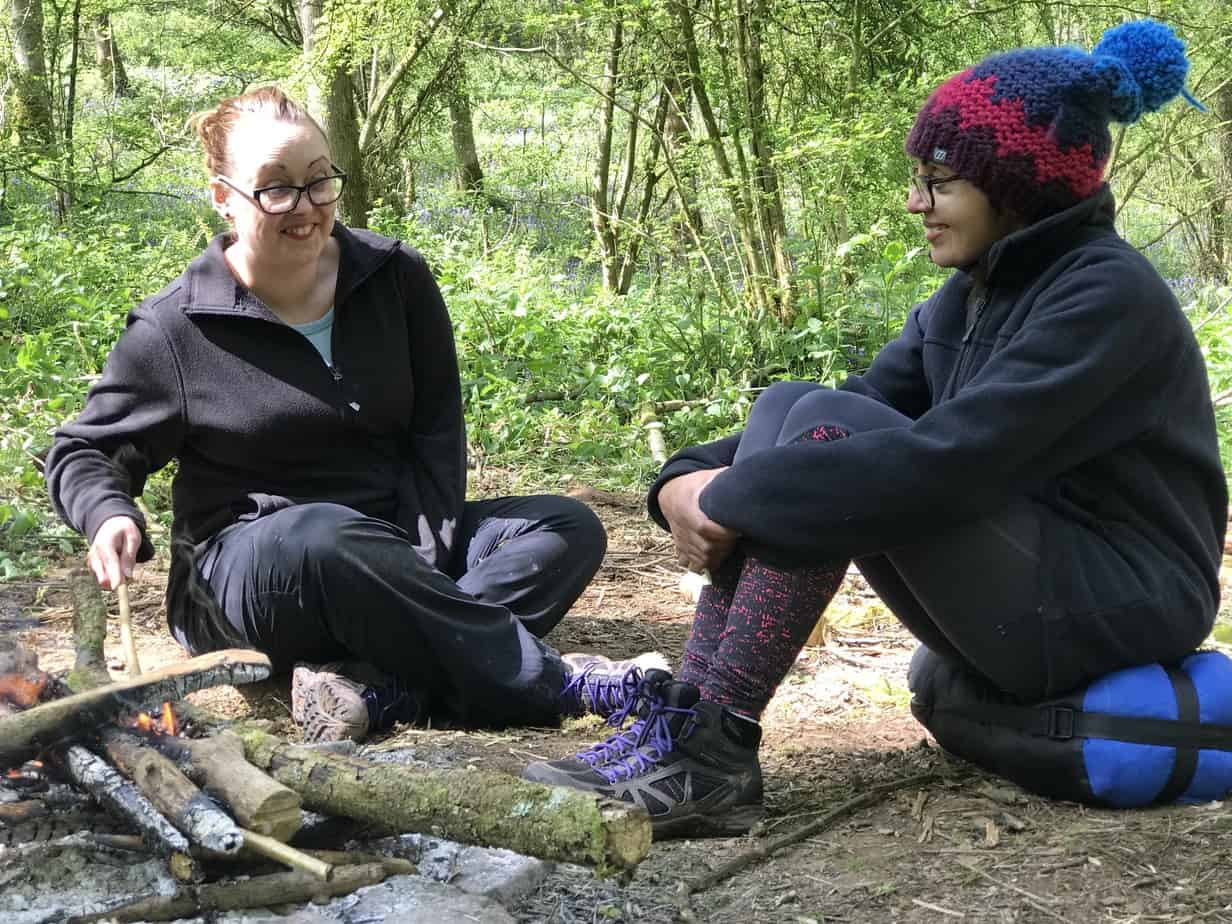 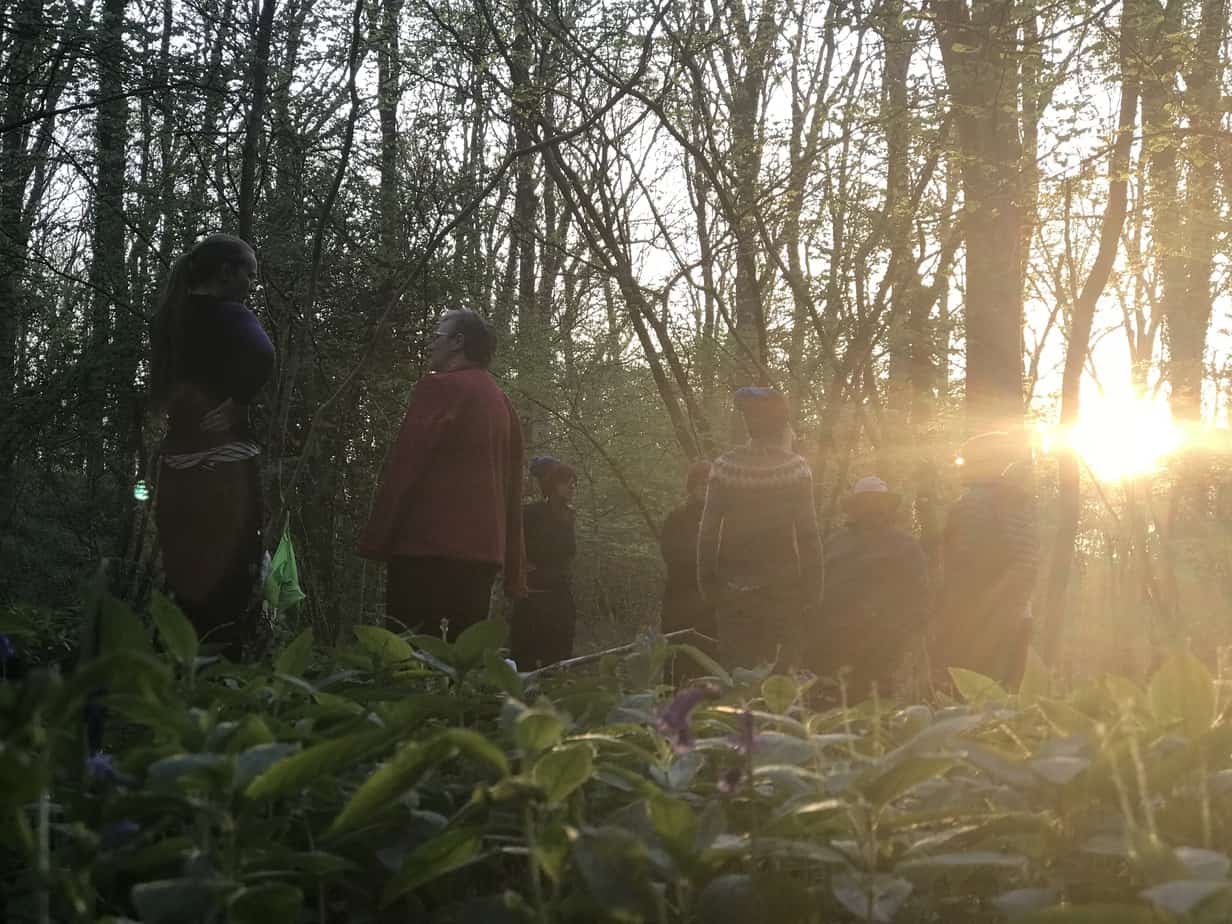 In a gentle and quiet way, we formed a strong sense of team that crept up on us and presented itself on day 4 as we stood around the campfire in the evening laughing, playing games and chatting. Now 9 women as we had lost a member early on who had to go home. We hadn’t forged bonds over long brutal days of tough group decisions. Instead, they had happened from honest heartfelt conversations or even just quiet times taking in a shared moment. It seemed representative of the environment we were in.

This expedition was very different from my previous ones. Usually, adventures are about being on the go all the time but this was the exact opposite. We were very much still and apart from the occasional walk for foraging or firewood, we never left the bubble of our camp. Rather than pushing myself to the limit, my days were about preservation. Using as little energy as possible to save the few calories that I was consuming.

My real challenge this expedition was learning to slow down. Working through tasks one at a time and being ok having a long day ahead of me with no distractions – no work, no books, no phone, no music. I’m always on the go. But this forced me to stop and learn to appreciate the simple sounds of the woods or the stories of my companions. And once I’d worked through the restlessness it was great. I found that rather than being stressed about my workload that lay untouched at home or my large pending expedition (Kicking the States), space actually made me appreciate it and feel excited rather than daunted by my to-do list.

We all reflected and took something away. For me, it was a proudly crafted spoon and the knowledge that I need to find more quiet and space in my life.

Oh…..and the numbers of 9 new friends for life! 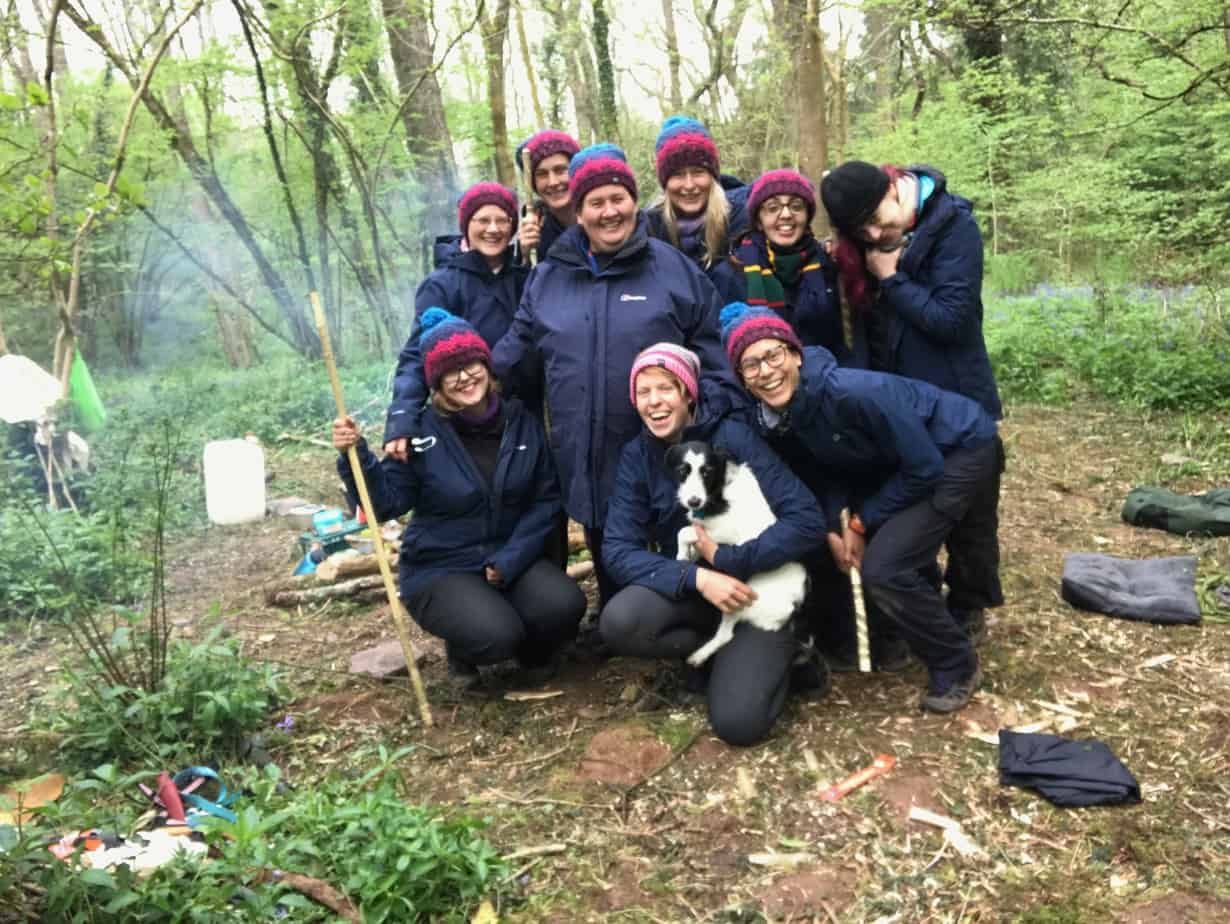 Check out the Love Her Wild adventures page to see what other all-female expeditions we have on the horizon. A huge thank you to Merrell for providing our boots, Berghaus our jackets and hats and Alpkit our bivy bags.