What is it like to sleep in a snow hole 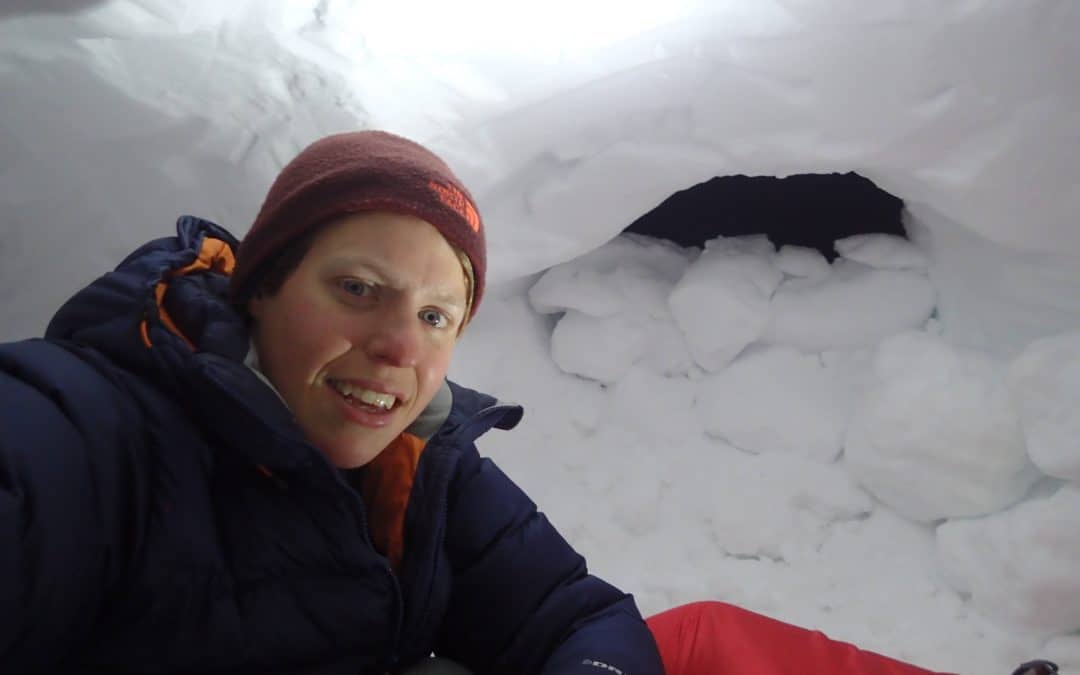 “You don’t sleep in a snow hole. You just wait for morning.”

An experienced guide told me this once. I thought about these reassuring words as I dug away at my snow hole wondering if I could actually be bothered to spend a night in the thing.

I was mid-week through a Love Her Wild Winter Skills course (read my blog: what you need to know before doing a winter skills course). We were learning the art of snow holing, a skill that could potentially save your life if you were to get stuck on a mountain in winter conditions.

Effectively a snow hole is the opposite to an igloo in that you did into the snow to create a shelter.

We’d split into pairs and shown how to build a safe and stable structure. Starting with a wedge cut into the slope, deep enough to reach the hard snow. Once we had our entrance we then started to work sideways, digging out a space big enough for 2 people to lie comfortably together and high enough to be able to sit up in. 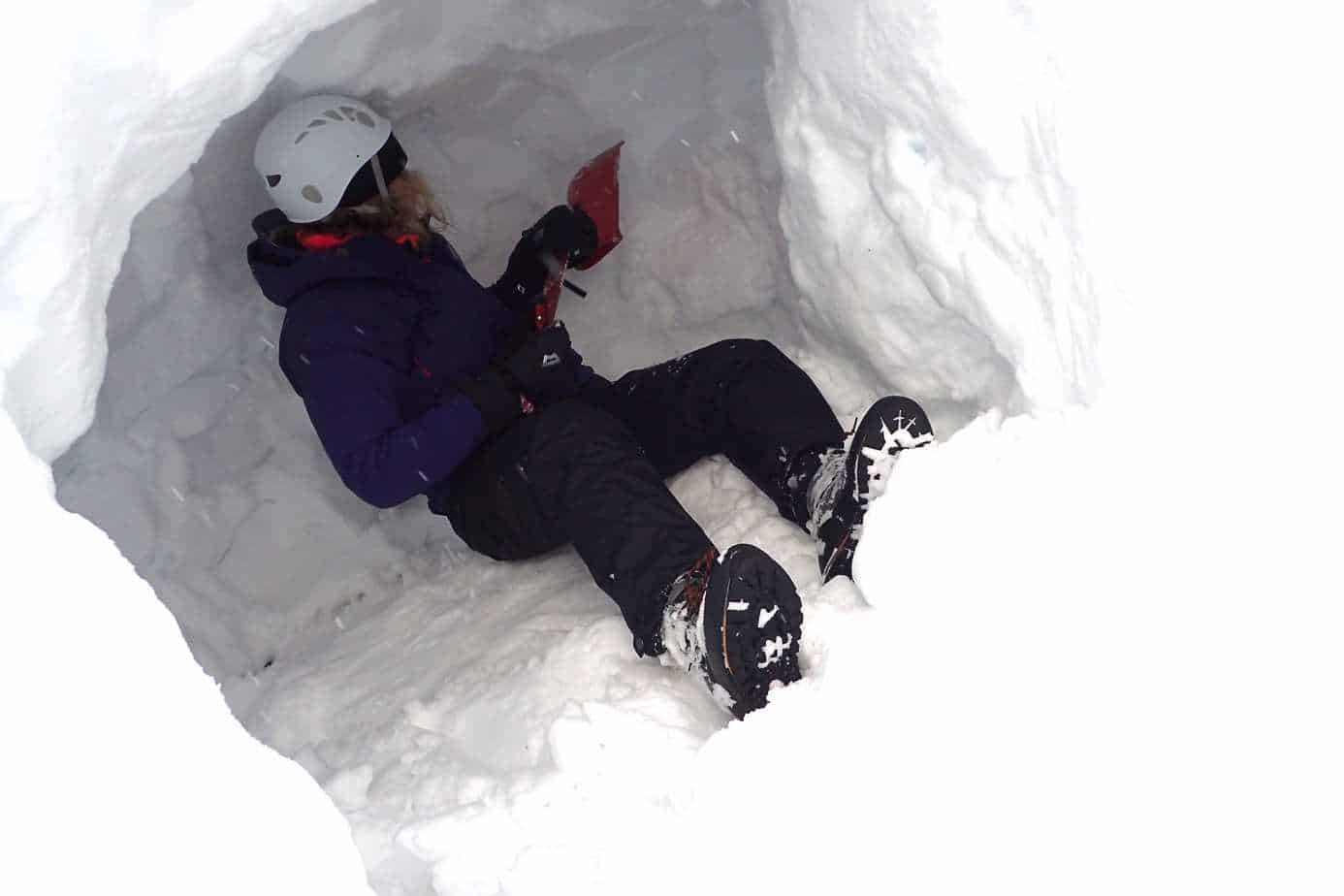 I loved digging…who knew I had that talent hidden in me?!

Some of the women in the group had declared they weren’t sleeping in the snowhole at all. Some had started out keen and then began to switch tactics saying that maybe they’d do it tomorrow night instead. But my snow-buddy and I were committed. We were camping out tonight…..until dinner time when she told me she was bailing out too.

(It’s allright Sarah, I forgive you) 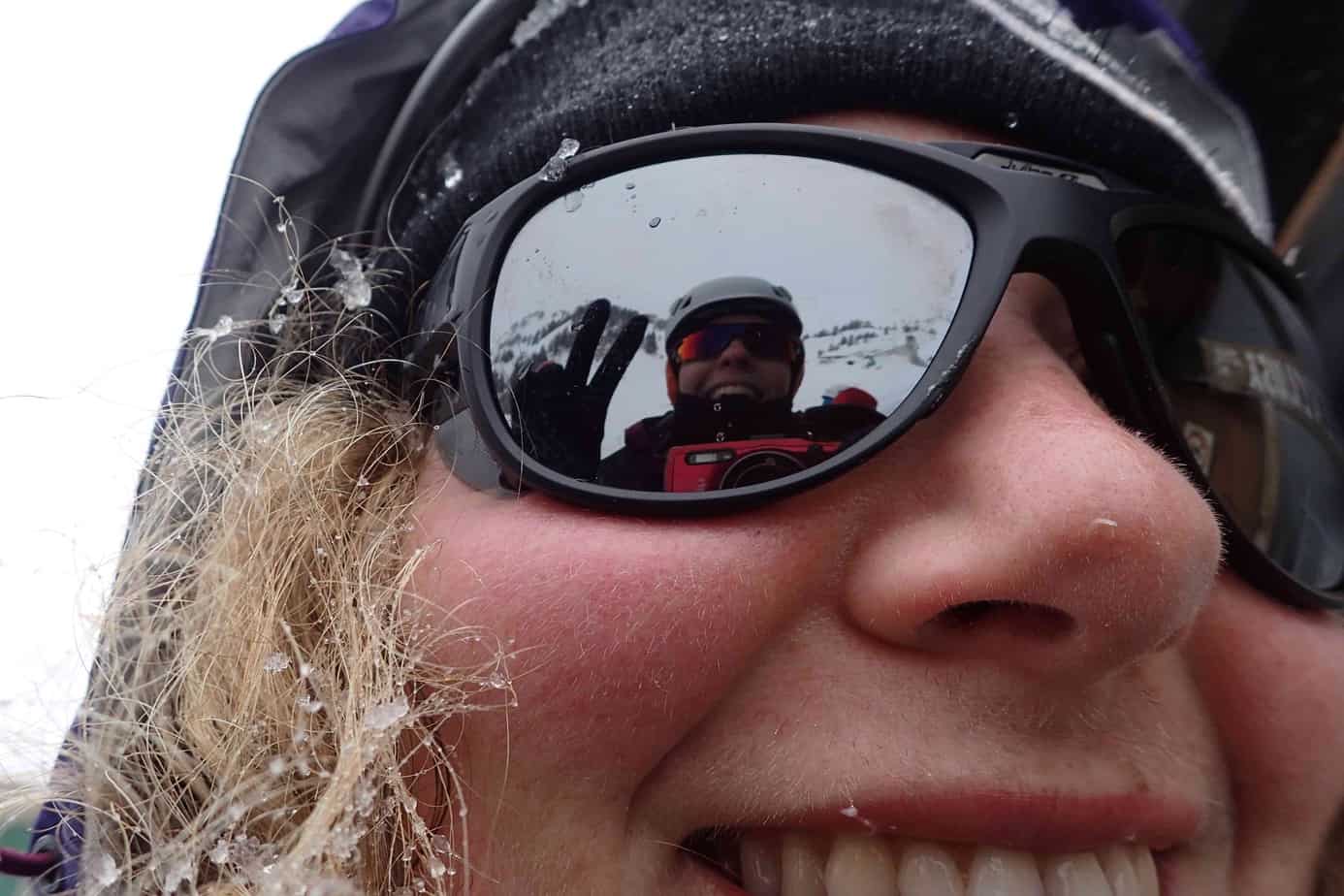 The pros and cons

Then I thought about the cons….

It was a no-brainer! 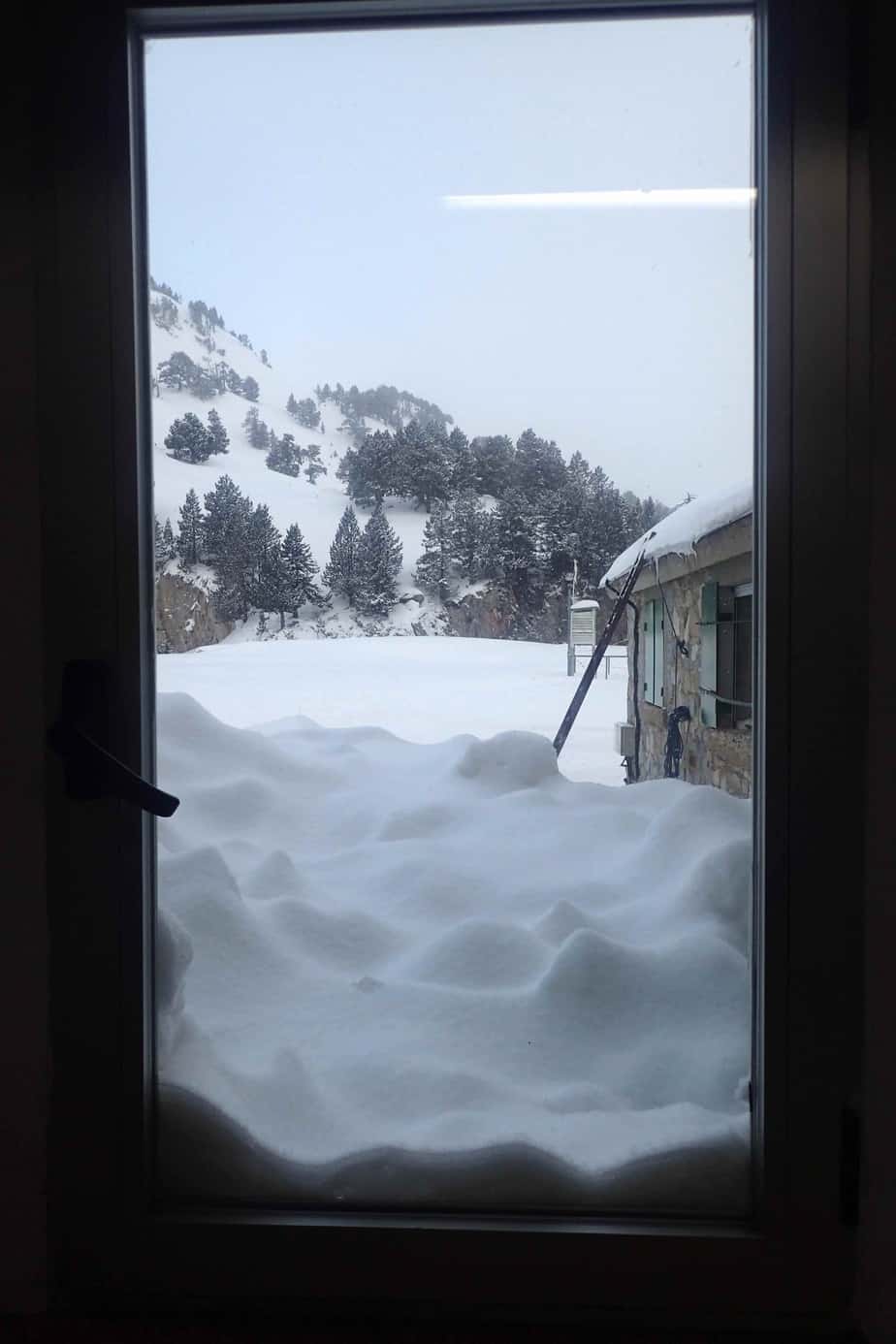 My first ever wild camp solo

One of my goals for 2018 was to wild camp solo. It’s something I’d wanted to do for a long time but had found that without a purpose or opportunity, I’d kept putting it off. So it seemed mad not to grab this chance while I had it, even if it was in quite extreme circumstances. Sometimes a huge leap is easier than a little step.

I rushed to the snow hole as quick as I could with my gear….an inflatable roll mat, bivy bag, sleeping bag, headtorch and all the warm clothing I had with me. 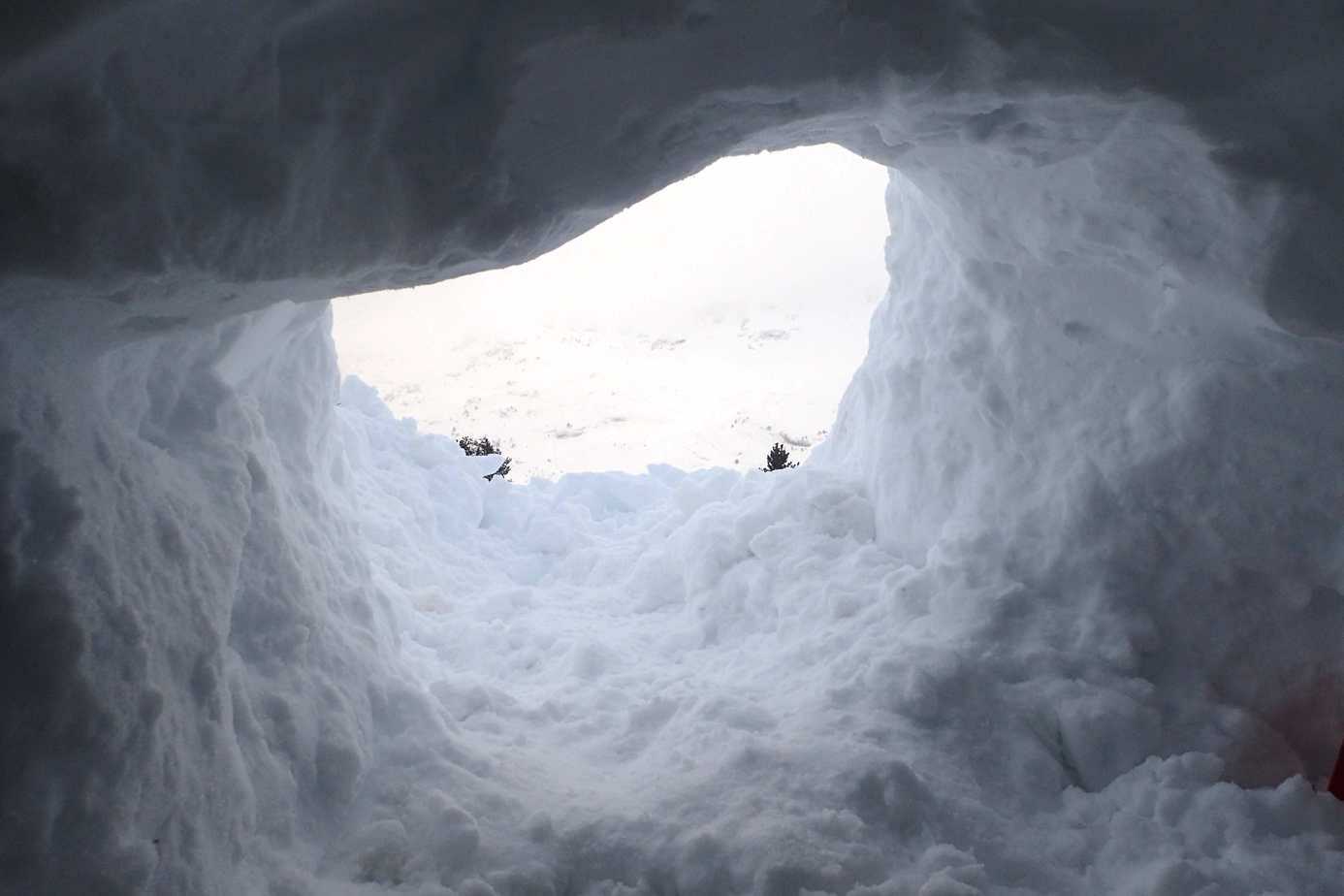 As I’d been instructed I filled in the entrance of the hole leaving a gap at the top for ventilation and the shovel inside with me. Then, while I was still warm from the effort, I got inside my sleeping bag and snuggled down. I kept the torch on for a while just taking in my surroundings. It was spacious. And white.

10 minutes later I was roasting so I threw off my down jacket and one of my fleeces. ‘A good start’ I thought.

With nothing left to do, I turned off my torch and settled into sleep, wishing I had a book with me for distraction.

It was quiet. Almost painfully quiet. And very dark.

The lack of sensory stimulation put my mind on high alert and I fought hard to not think about ghosts, creepy little drowned girls or clowns. I’m afraid of the dark when I am on my own and blame this almost entirely on attempting to read IT as a teenager and also on that time my flatmate woke me up from a nightmare screaming that there was a lady in a dress in our house. Emotionally scarred for life!!!

I pretended that my husband was sleeping next to me and I was just on a hiking trip. But every time I’d get to that point that I was about to go to sleep a thought in the back of my head would go ‘lady in a dress’ and I’d be awake again. I’d stick my head out the sleeping bag to check it was still silent and sometimes turn the light on just for reassurance.

After probably about 2 hours of this game, sleep eventually won. 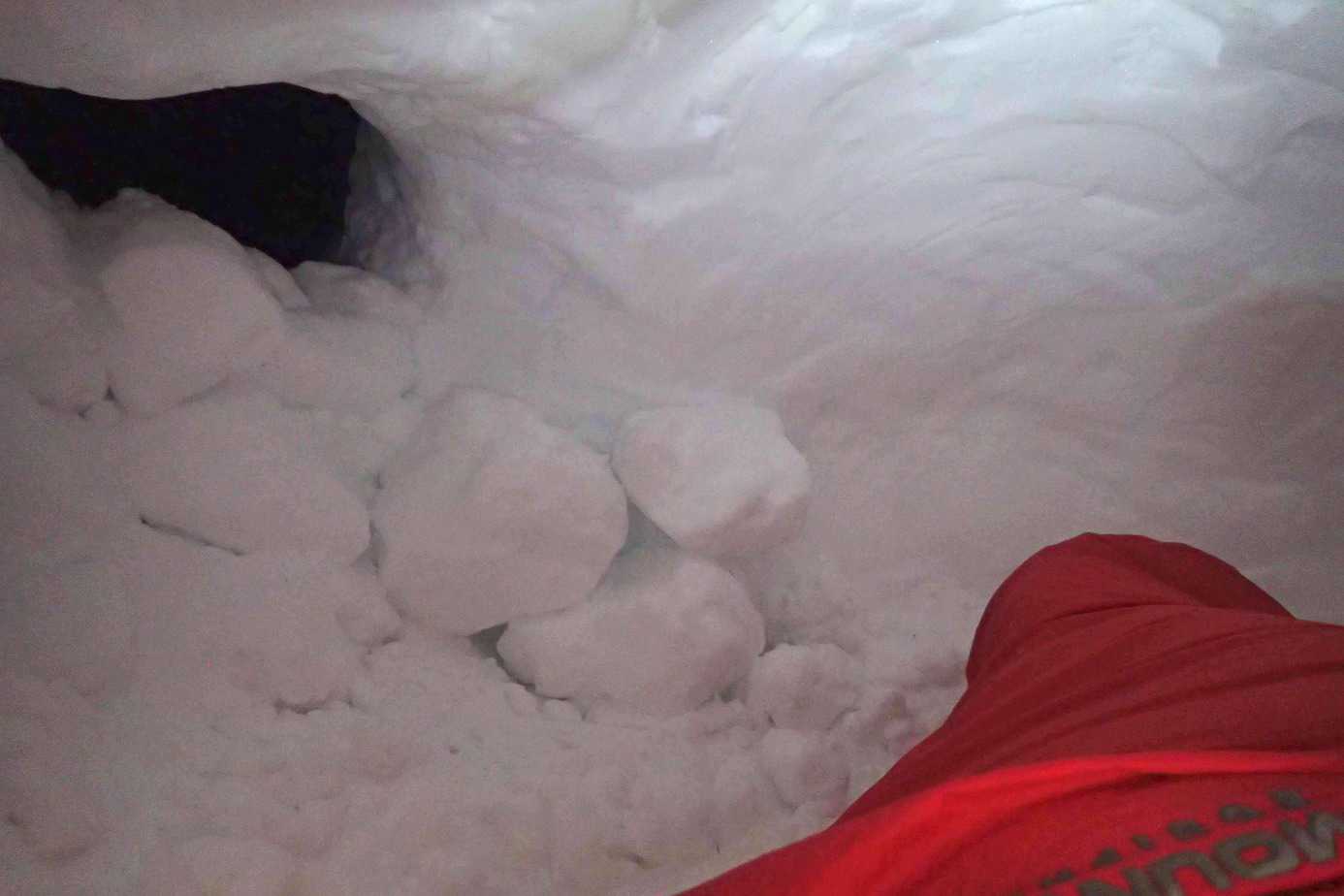 So I did get some sleep. Probably a decent 5 hours…until the cold hit me. I could feel it radiating through the floor. I threw on the layers I’d taken off before bed and began that horrible drifting in and out of sleep trying to stay warm. This was the ‘waiting till morning’ part.

At 6 am, I dug myself out of the entrance, plodded back to the mountain hut and rejoined the group getting ready for our summit day. Feeling a little smug with myself.

‘It was all right’ I said casually when everyone enquired how it’d been. And that was a good summary. It wasn’t the best nights sleep and it wasn’t the worst. But heck, I spent the night alone….in a hole…..in the snow…..up a mountain in the Pyrenees. All while conquering my fear of the dark and spending my first night camping solo. Losing a few hours of sleep for that experience…..totally worth it! 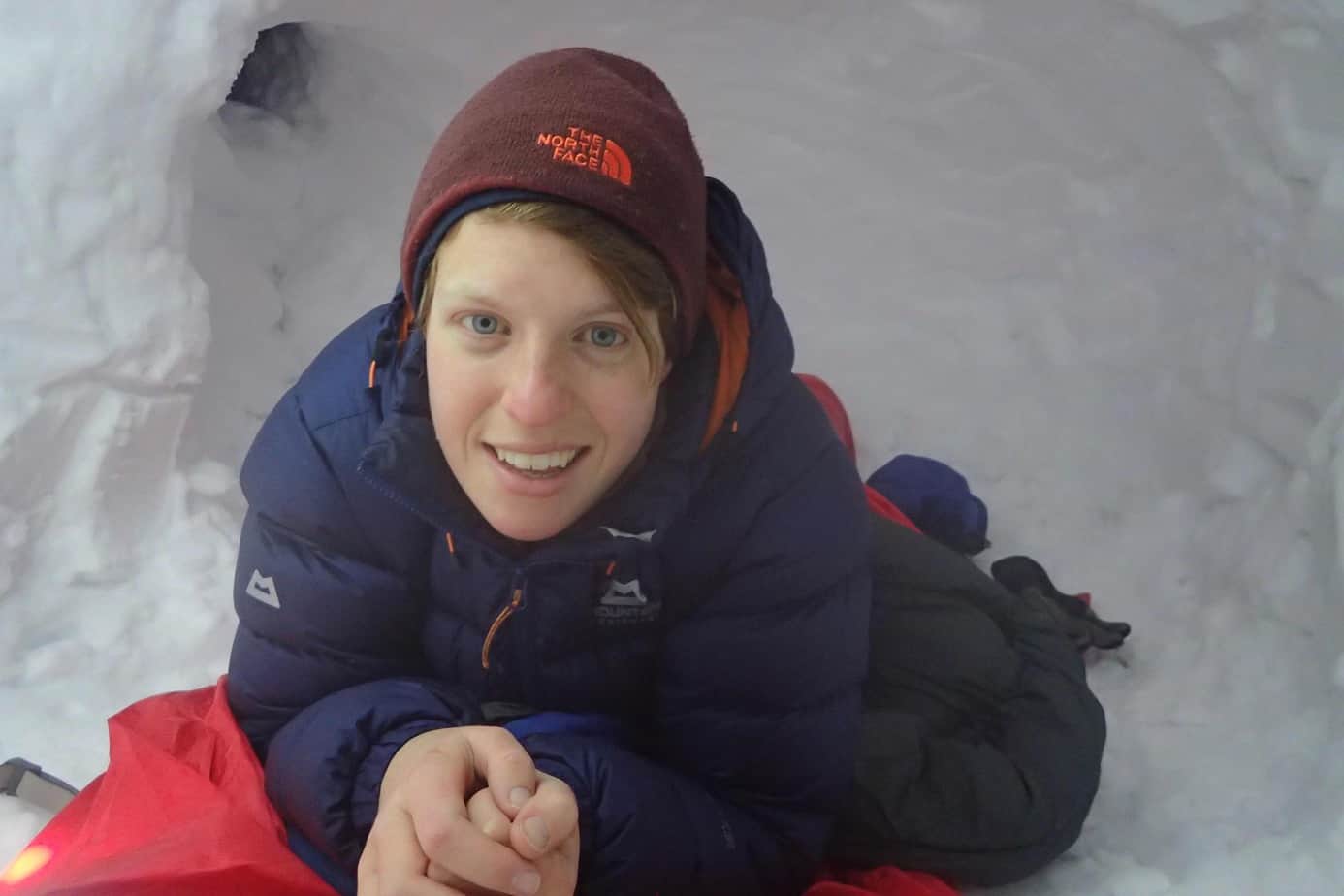 Want to sleep in a snow hole?

This course was delivered by the team at 360 Expeditions. Snow holing is included as part of their Winter Skills Course. A 7-day course in the Pyrenees which costs £740. Don’t sleep in a snow hole for the first time without proper training and supervision!