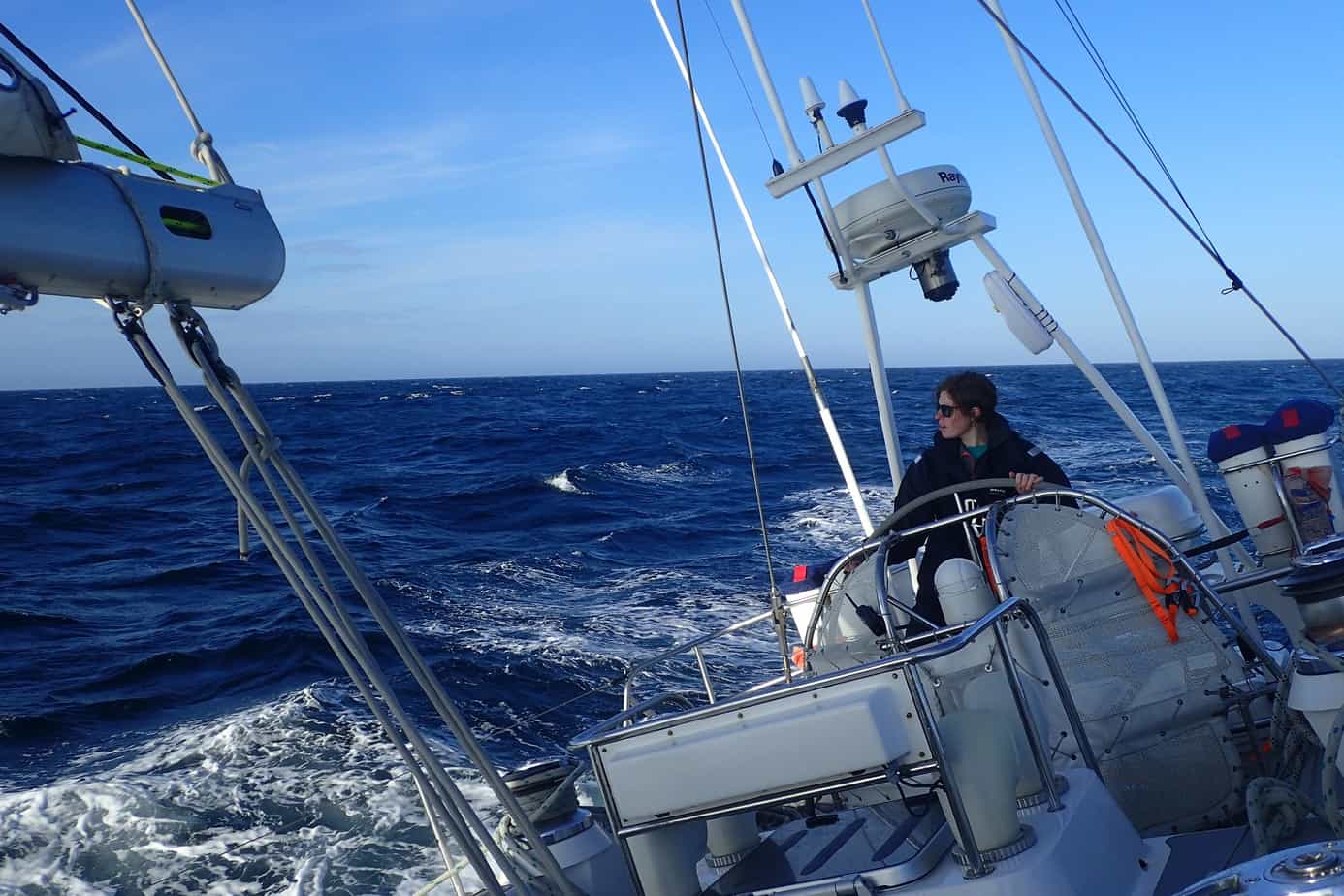 Everyone on board had been put into 2 watches, 5 people in each, and my team had the late morning watch for today – 1pm to 7pm and 11pm to 3am. The next day we would switch so our duty times would be 7am to 1pm, 7pm to 11pm and 3am to 7am. When your watch is on, you must all be on deck helming (steering the boat), looking out for obstacles, changing the sails when it is needed and then doing a bit of cleaning, cooking or, if the other team has just cooked, washing up. I liked our watch. We had poor Ruth who suffered from seasickness so bad she spent the entire trip in her berth apart from 2 short appearances on deck. (I sympathised with her massively as 16 hours was torturous enough for me.) Also in my group was Ruth’s husband, Chris, a medical student called Lottie and Gil.

With Ruth, who was bed ridden, and Chris, who had a serious man-allergy to cleaning and washing up, it meant that the kitchen chores were effectively split between 3 people. This made for a lot of hard work! 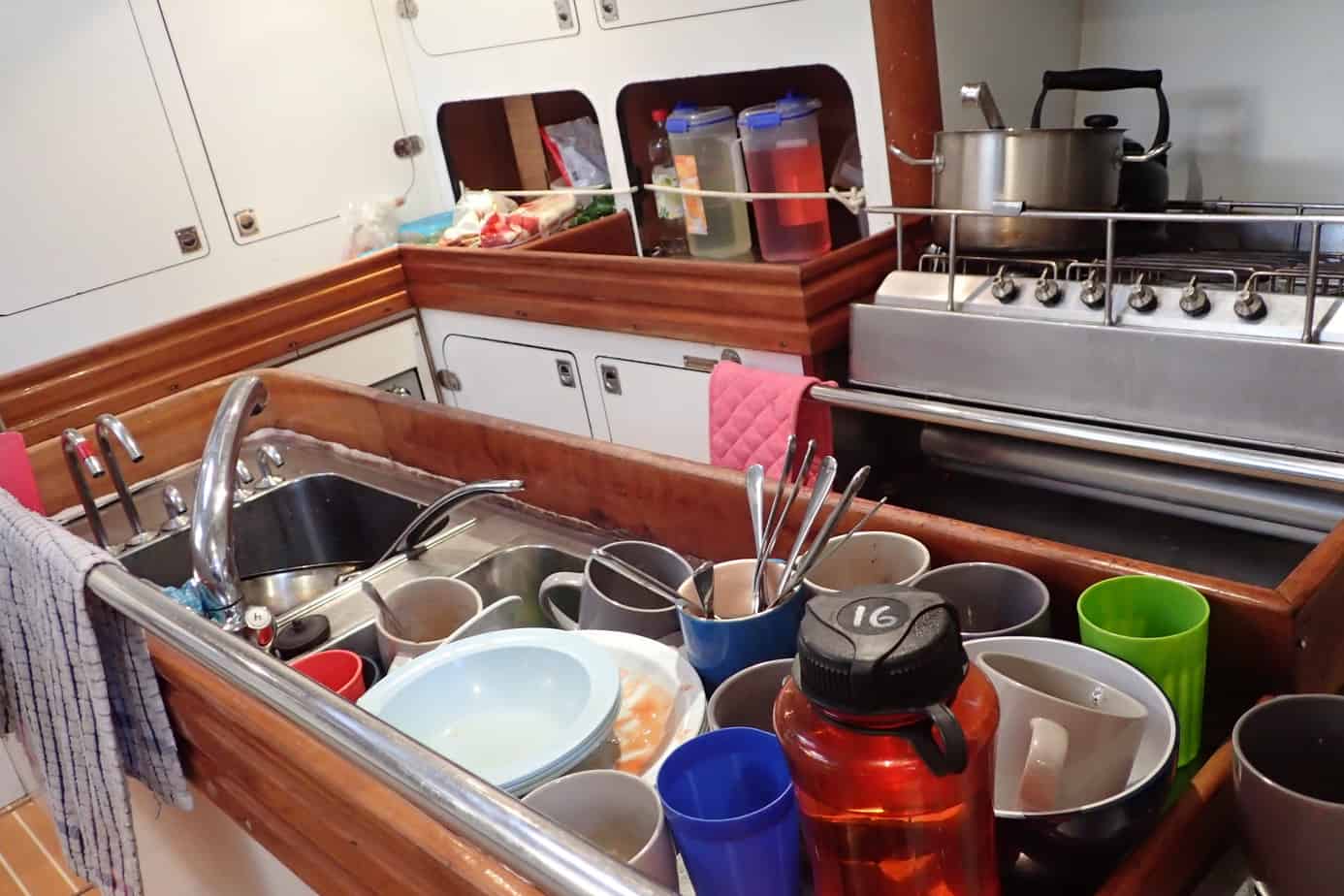 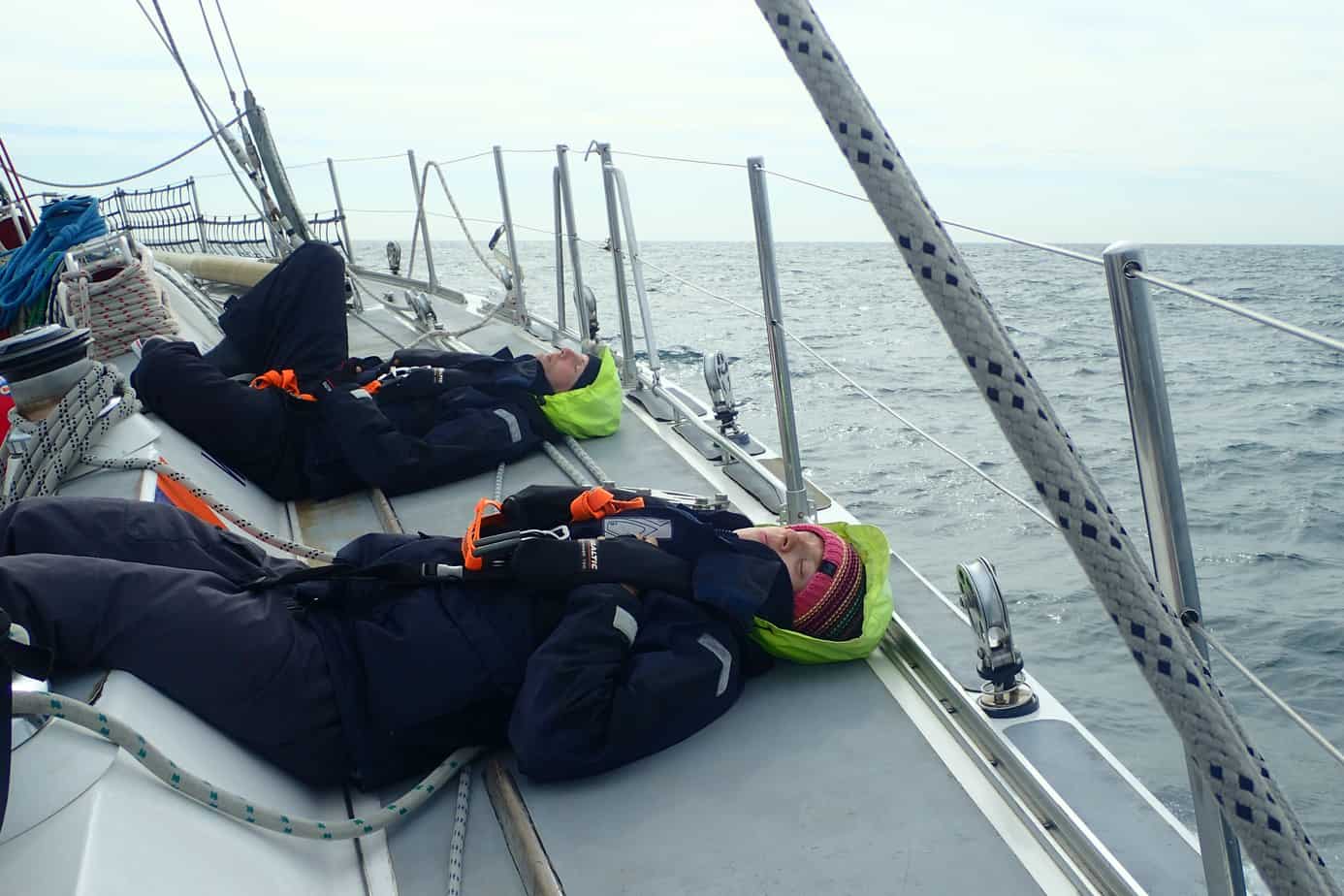 The afternoon was was cloudy and chilly but I enjoyed being on deck in the breeze and calmer waters while my body recovered a bit. By the evening a thick fog surrounded us, reducing visibility at one point to only 500m. I was half expecting the Black Pearl to appear any minute. Although very atmospheric, the novelty soon wore off as the lack of things to look at quickly became boring and the dampness in the air quickly soaked through everything making it very cold, especially for the night shift which was soon on us.

Each time the boat pushed through the waters it lit up plankton that made a sparkling effect in the water. How is this stuff even real! I spent most of the night shift gazing at the waters trying to catch the shimmering lights.

It felt like a long time before 3am came by and I could roll into my bunk and put my ear plugs and sleep mask on. I was out like a light. 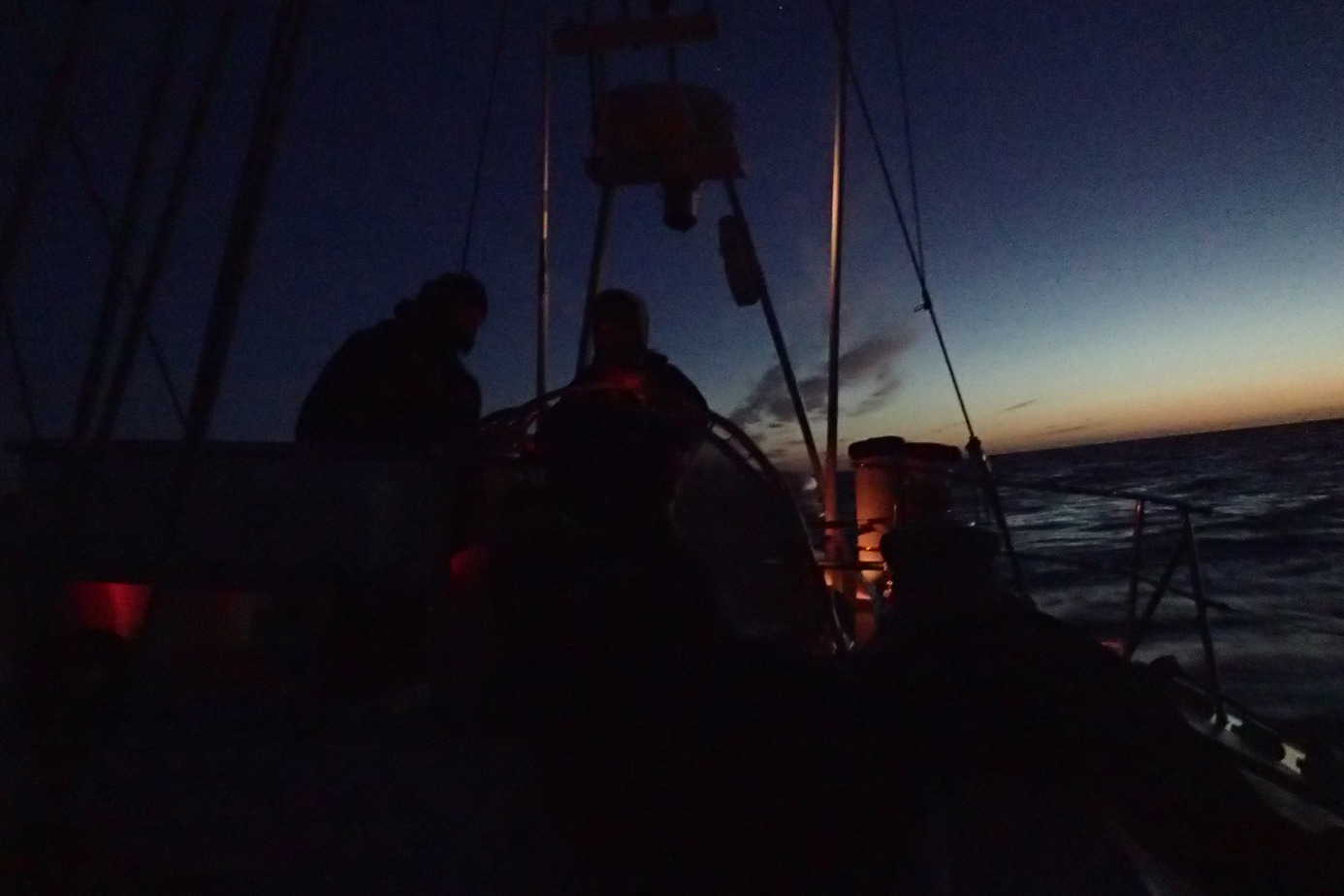 It felt like no more than 10 minutes before I was being shaken awake by the other watch and told it was our turn again. I sleepily got into my waterproofs. The eggs for breakfast looked a little on the anaemic side so I opted for a stale slice of bread instead before heading out for my watch. Gourmet meals at sea! Within a couple of hours the sun had cleared the fog and we were able to ditch our layers for sun glasses. It was bliss! I took an extra long time on my turn on the helm, enjoying pottering along in the swirling waves with the birds for company and the fluffy white clouds on the horizon. Ruth attempted to make an appearance on deck but soon had to retreat because she felt too sick. I knew if she felt like that in these calm waters then she has no chance. 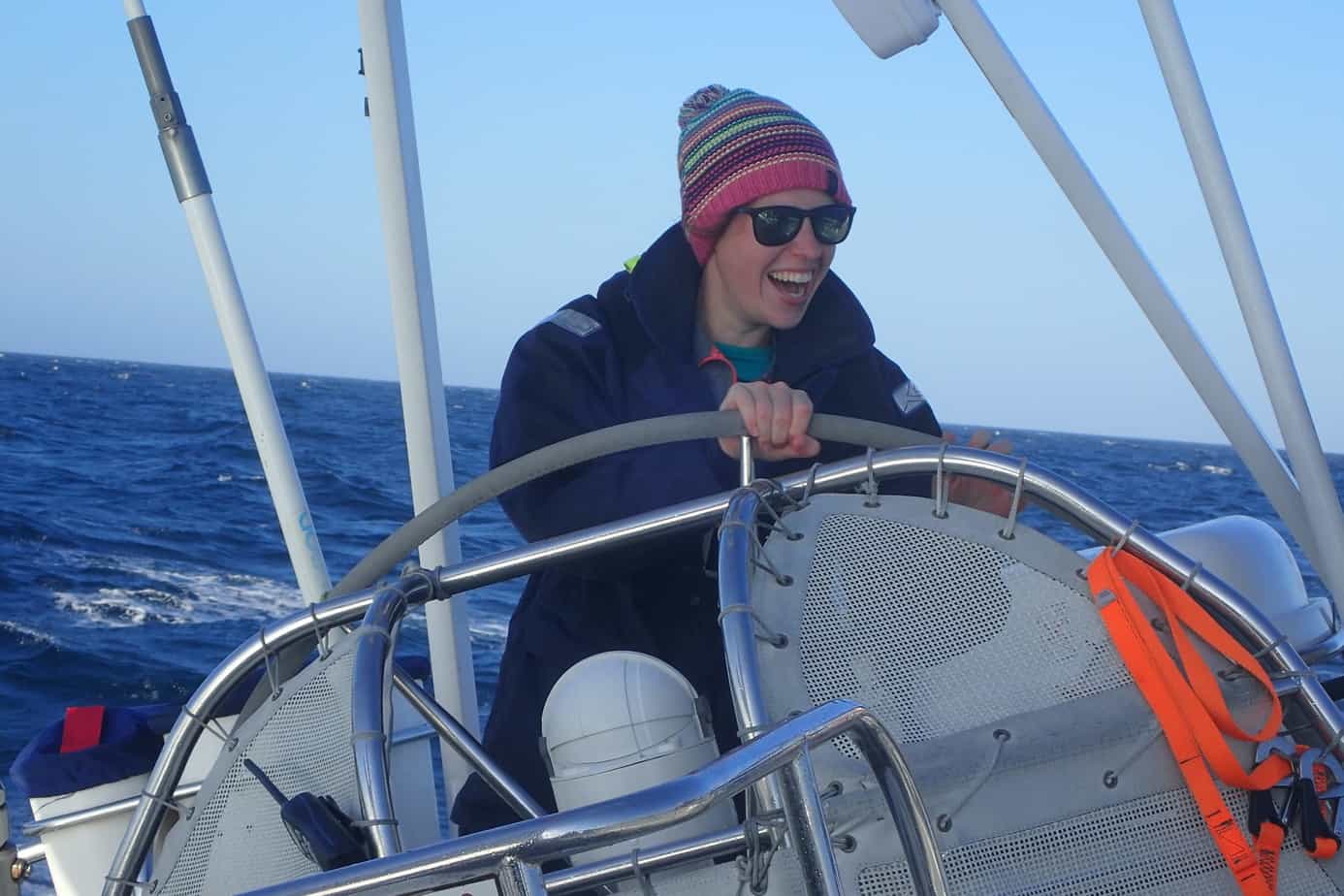 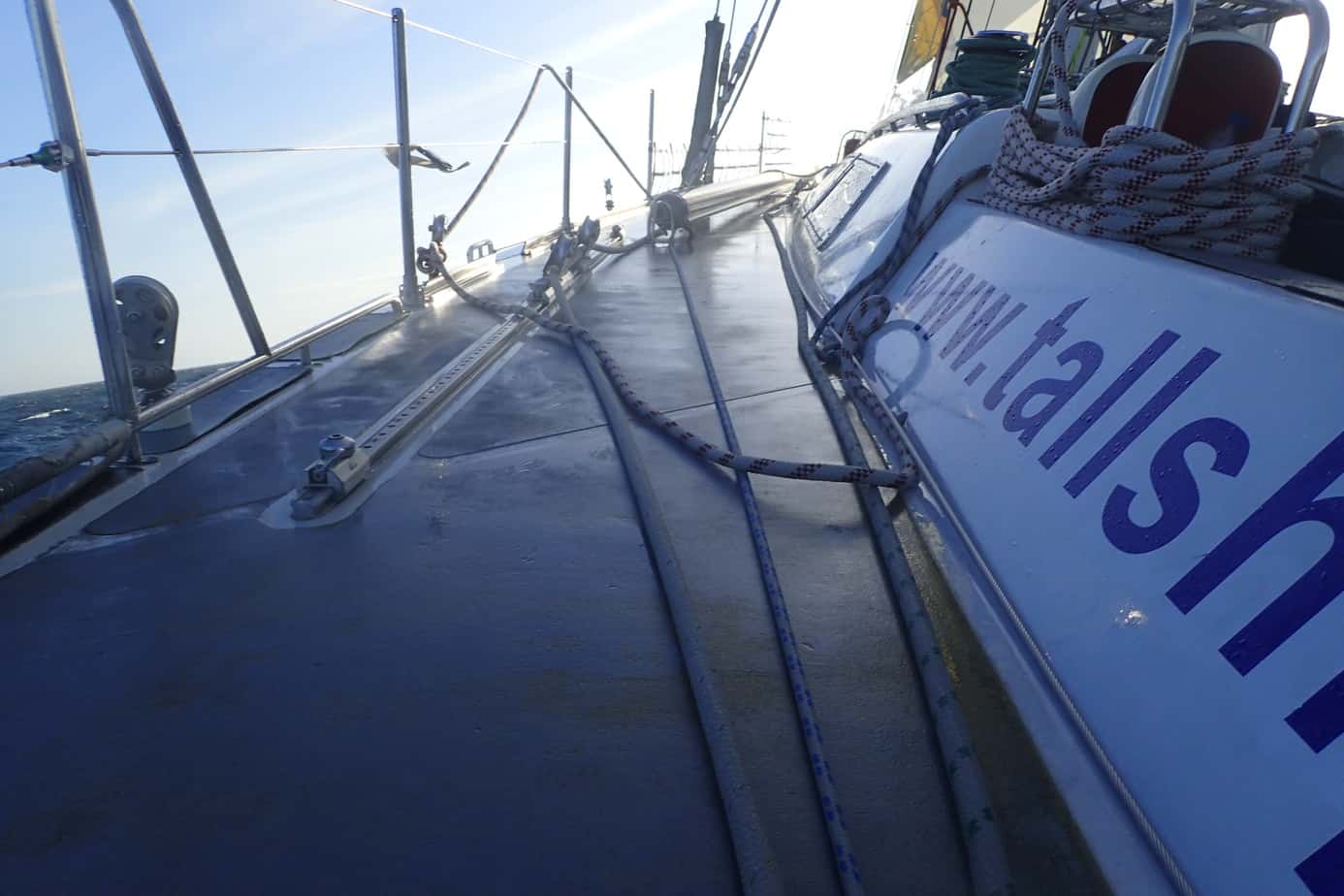 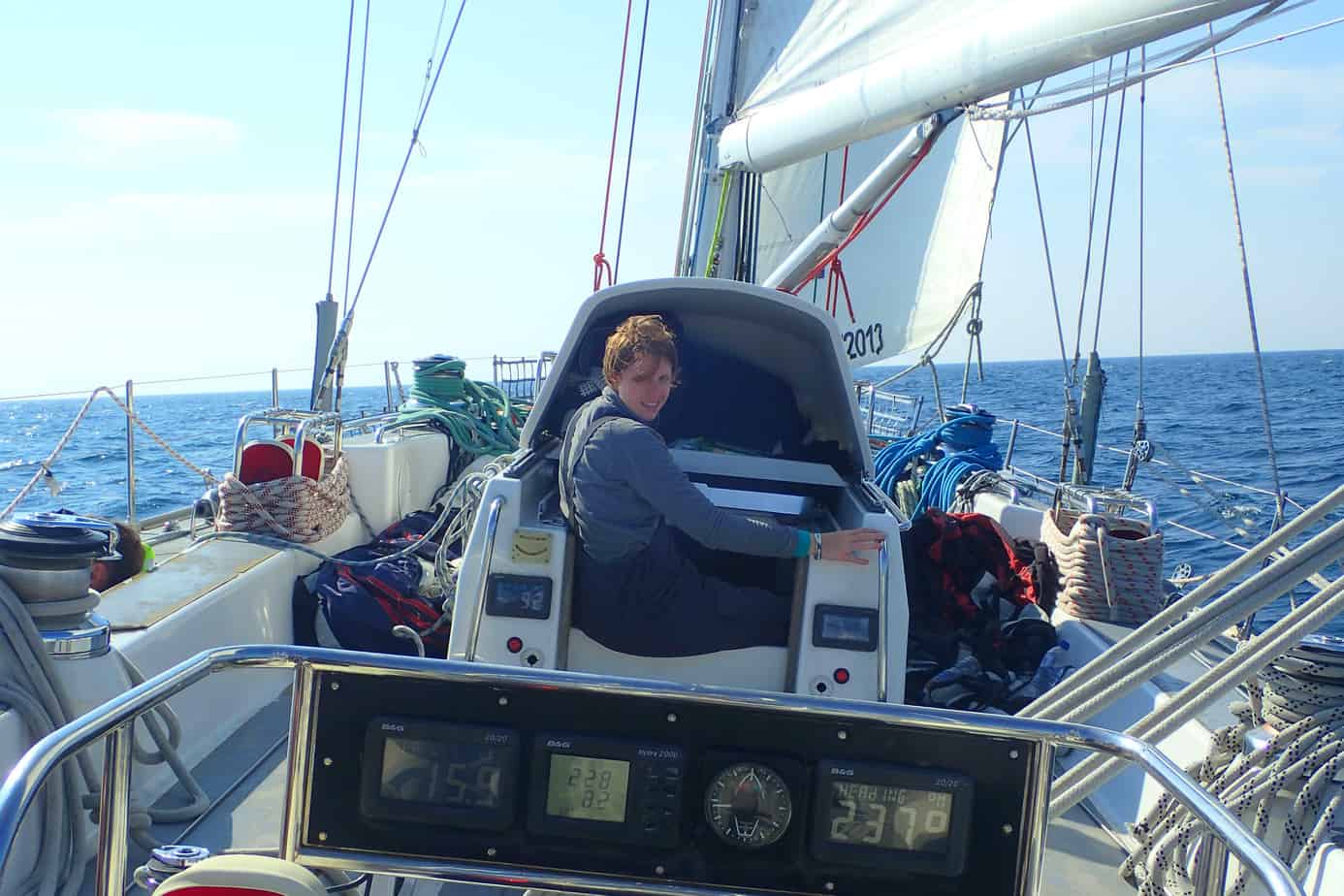 I spent some time chatting to Lottie who has loads of great medical student stories about bodies and death. We joked about the funny characters on the boat – Chris and his ability to avoid doing all duties below deck and a guy on the other watch who really needs a shower. It’s funny that although you are all living in such close quarters, we barely see any of the other team except for a brief 2 minutes when we switch watches.

Lottie and I made today’s lunch, hot dogs. Cooking in the kitchen while the boat is moving about soon started to make us both feel a bit dodgy so the skipper took over. I ate my potion on deck and could only manage half of my second bread roll which ended up as ‘food for the fishes’. As it bobbed away Gil pointed out that you could see the roll still in the waves (no idea why). A guy on the other watch jumped up excitedly thinking he was talking about the roll of a dolphin which made me laugh so much I actually cried. That has to be a highlight of the week! 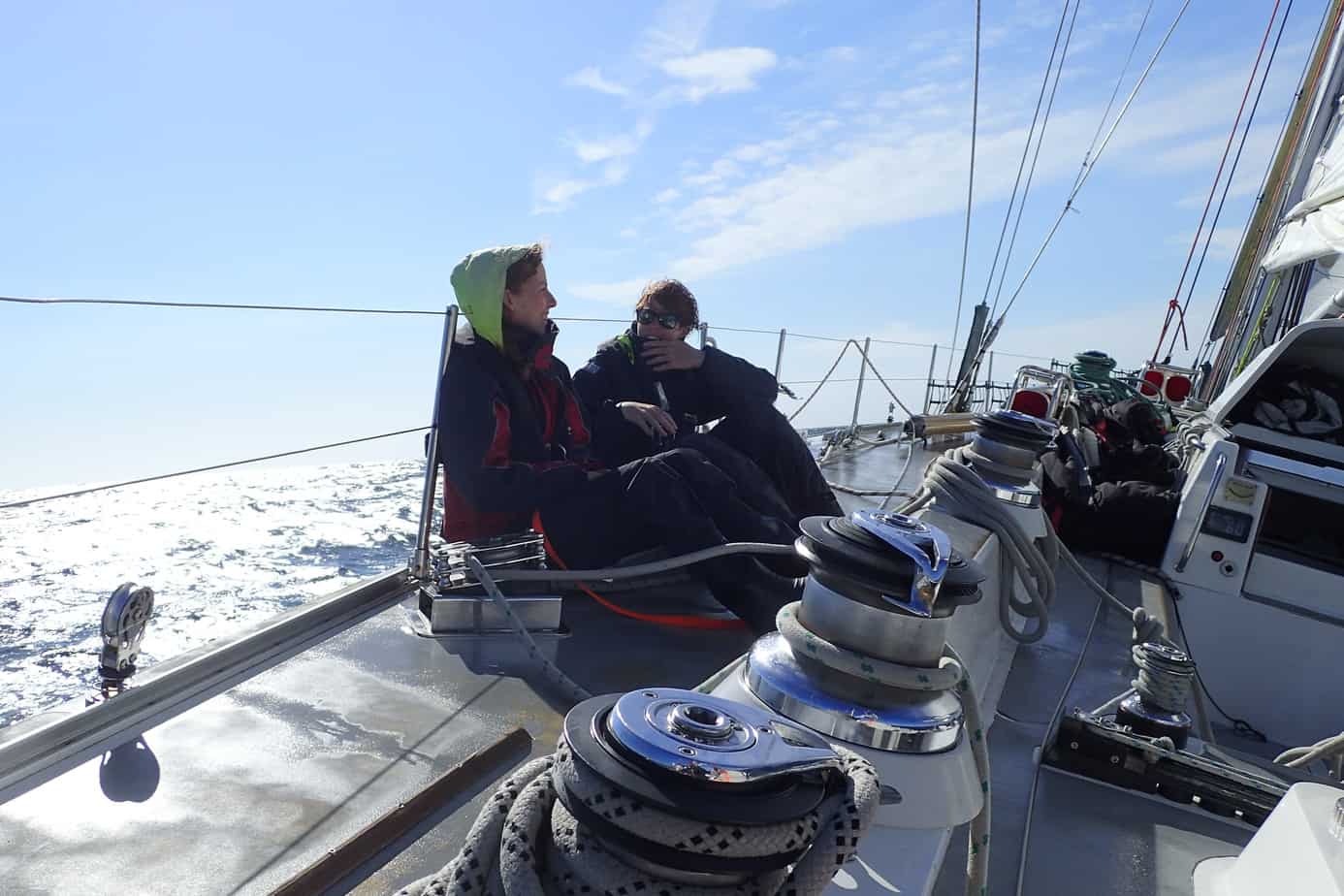 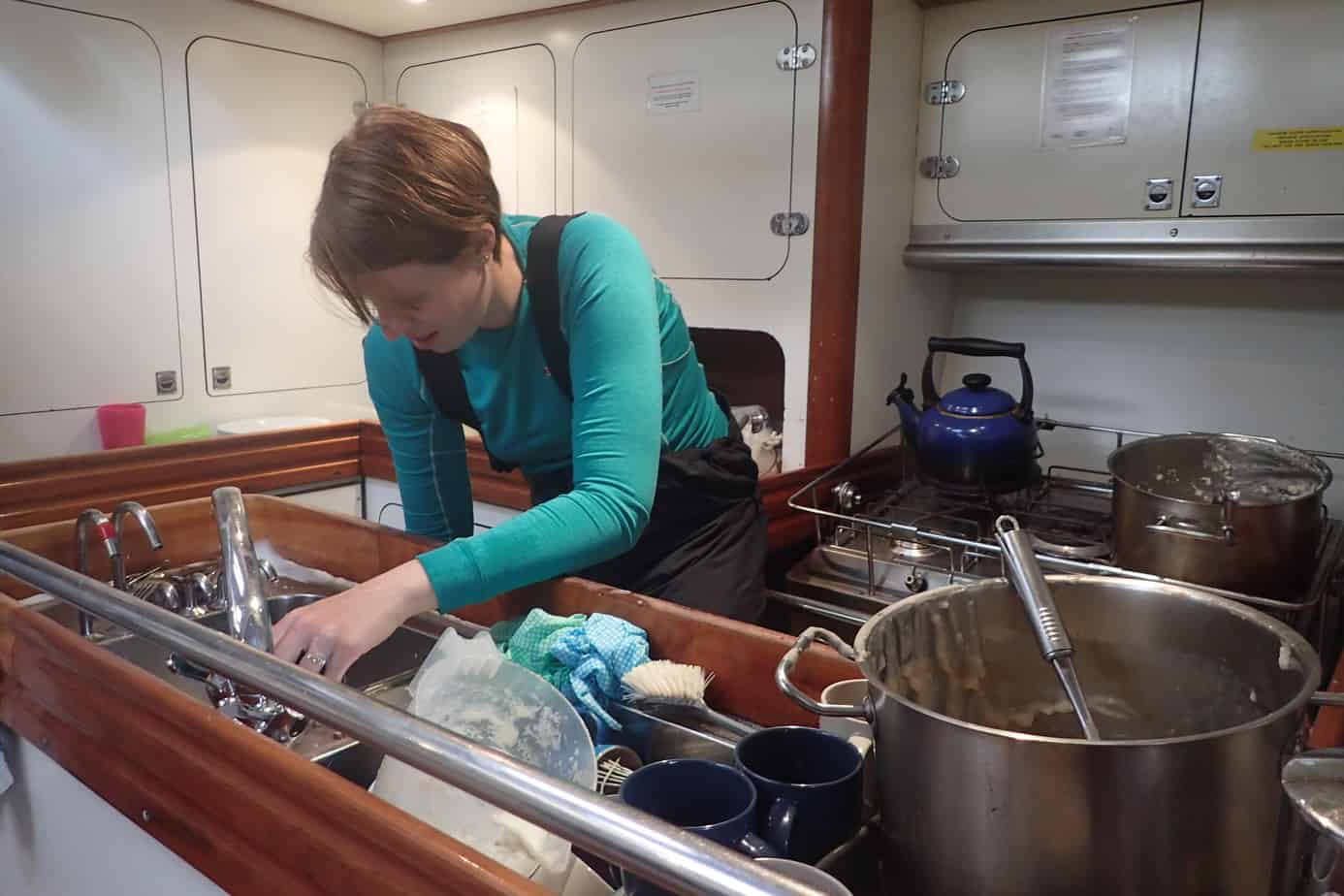 Although my queasiness was over and my strength had returned, my insides were still suffering. My entire abdominal area felt bruised and battered from all the retching. I felt like I had been beaten up with baseball bats.

Even without the soreness, everything on a yacht takes considerably more effort than it normally would. Getting into bed requires manoeuvring yourself into a tiny bunk 3 foot off the floor. Going to the toilet involves emptying the pumps by hand, a good 20 times. You also have to pump to get water out the tap. On top of that the boat is constantly moving about and, when sailing, at an extreme angle. It’s comparable to trying to carry out all these, already laborious, tasks on a rollercoaster. This, along with disruptive sleep from the watch times, probably explains why I am so tired all the time. The second I am relieved from duties, I eat, take off my wet weather gear, wee and scramble into bed. I brought PJ’s with me but seriously can’t be bothered…it saves me a good couple of minutes when I have to get dressed again just a few hours later. 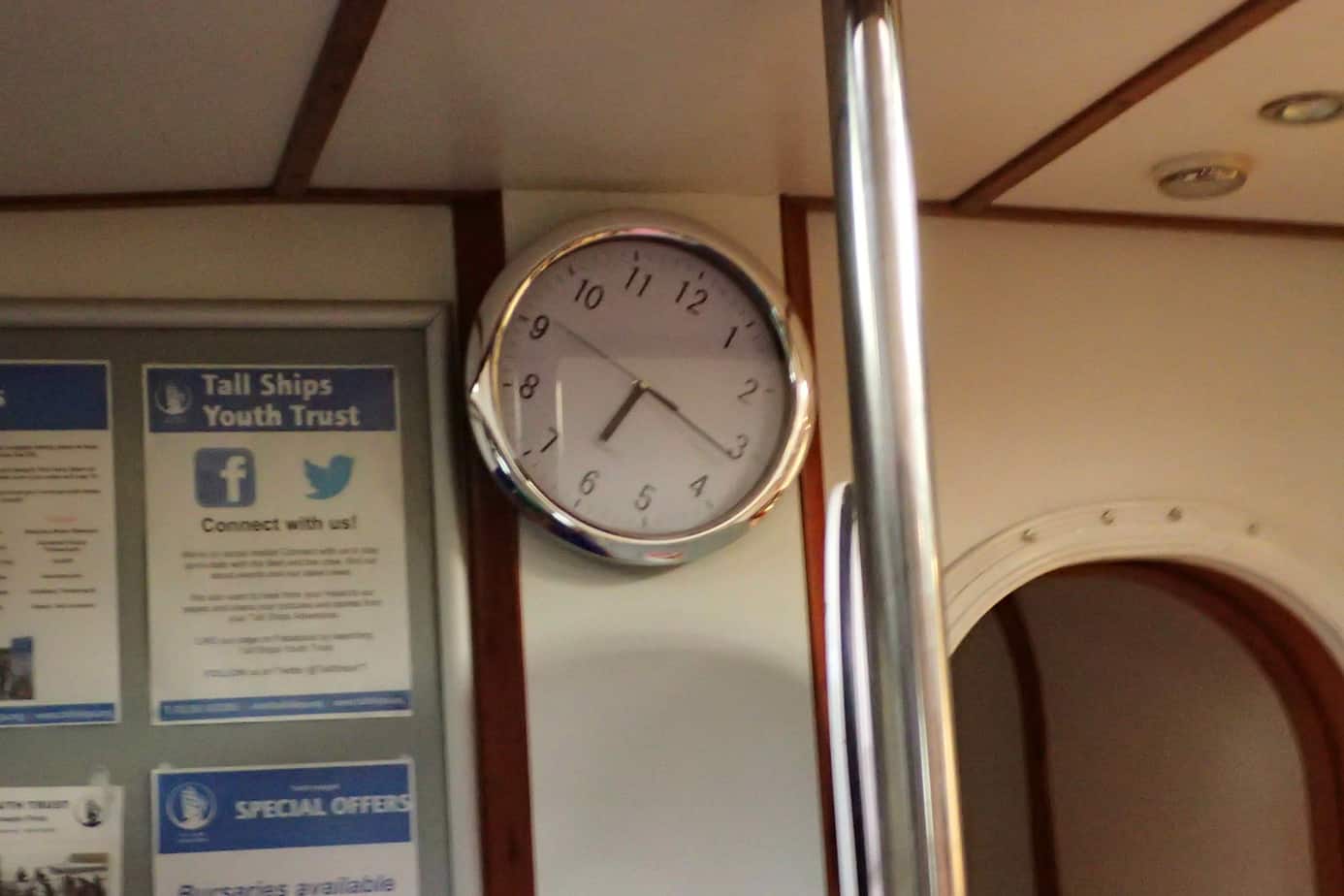 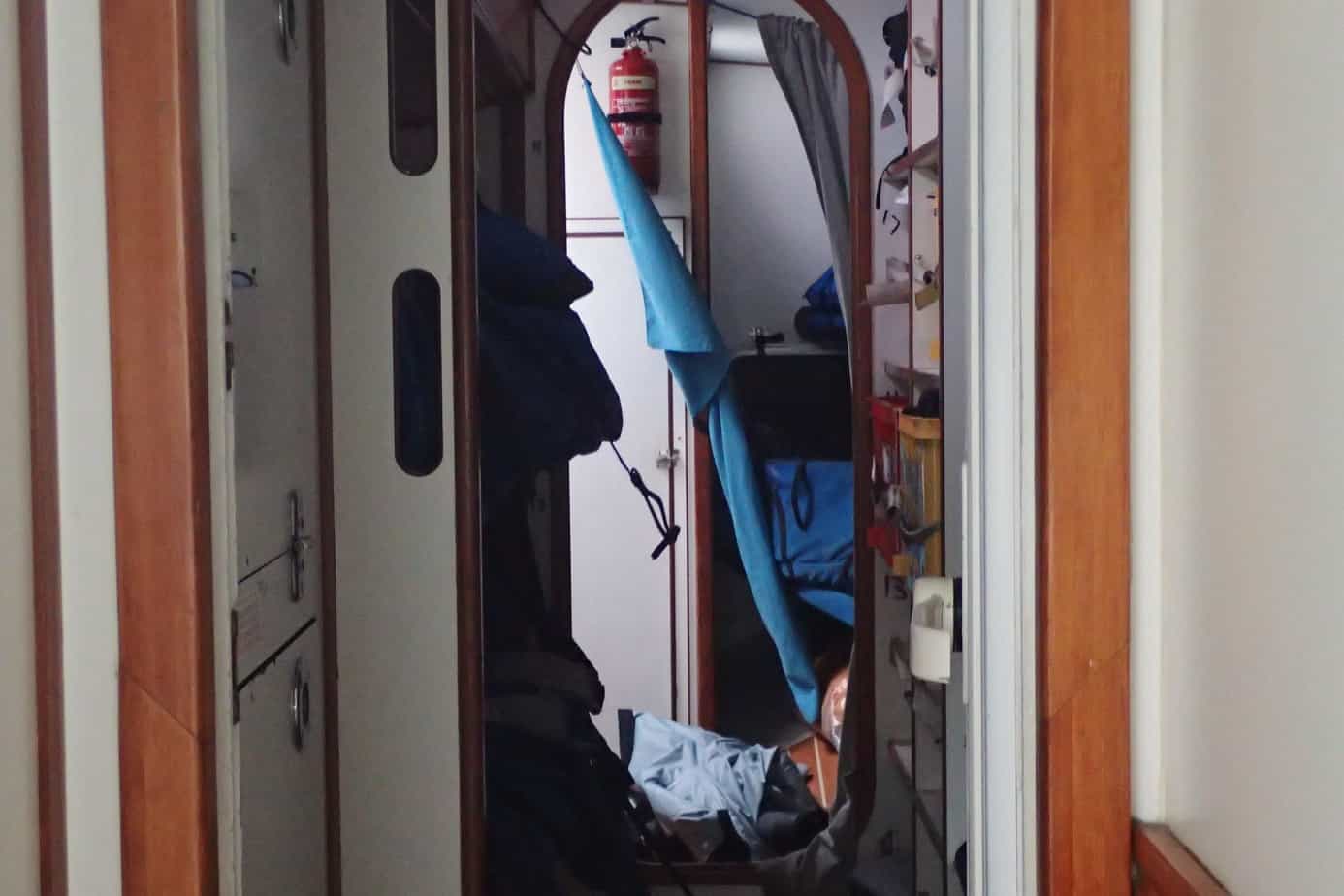 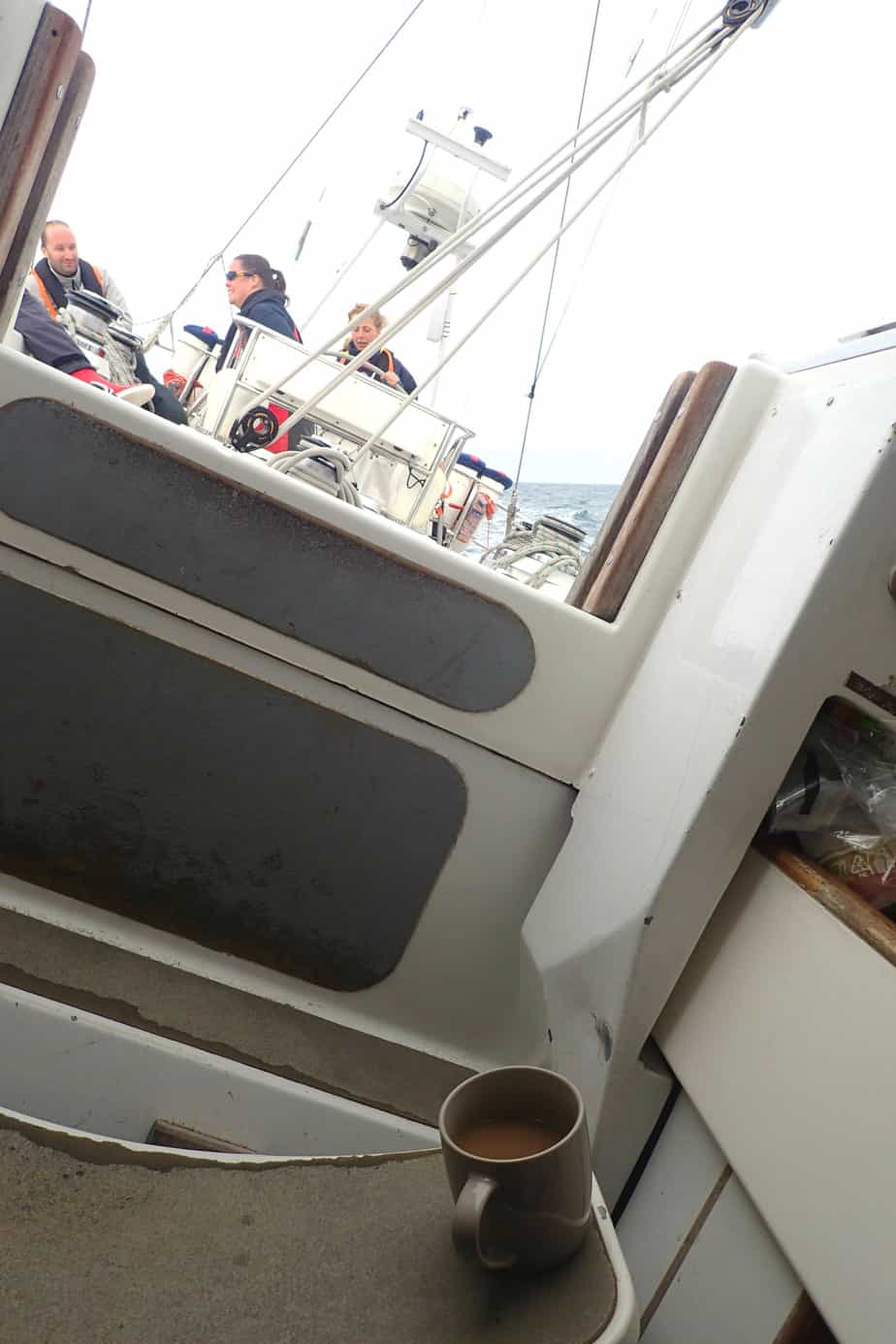 I slept all afternoon and was first to take to the helm on our evening watch at 7pm, just in time to be treated to the most spectacular sunset. We were surrounded by 8 oil rigs. I’d never seen one before and it was great having Chris there, who works as a driller on the rigs, to quiz him on what life is like on them and how they work. He gets a helicopter flight in and out every time he works his 3 week shift – he said the ride is really boring (!!!). I don’t fancy it though, being stuck on a floating metal lump with no escape for so many weeks of the year.

I finally managed to get Chris to help me doing washing up and he was about as useful as a teaspoon. I was happy to be out of the cold for a bit so didn’t mind so much. When we went back outside, we were greeted by the most amazing blanket of stars. We had 2, 4-hour shifts tonight. The time flew by gazing at the stars, the Milky Way, satellites and endless shooting stars. Our group has a lot of banter and we chatted about all sorts of random things – aliens, environmental issues, the point of life, space as well as making up some really bad songs about going to work on a rig. We also spent some time ponder some of life’s greatest mysteries……When Dolphins fall asleep, what stops them floating away and losing all their friends and family? We never did come to a conclusion on that one…

Just as the cold was getting unbearable, the skies slowly started to lighten and we were treated to an equally spectacular sunrise. I don’t think I’ve ever sat and watched a sunset and a sunrise on the same night. 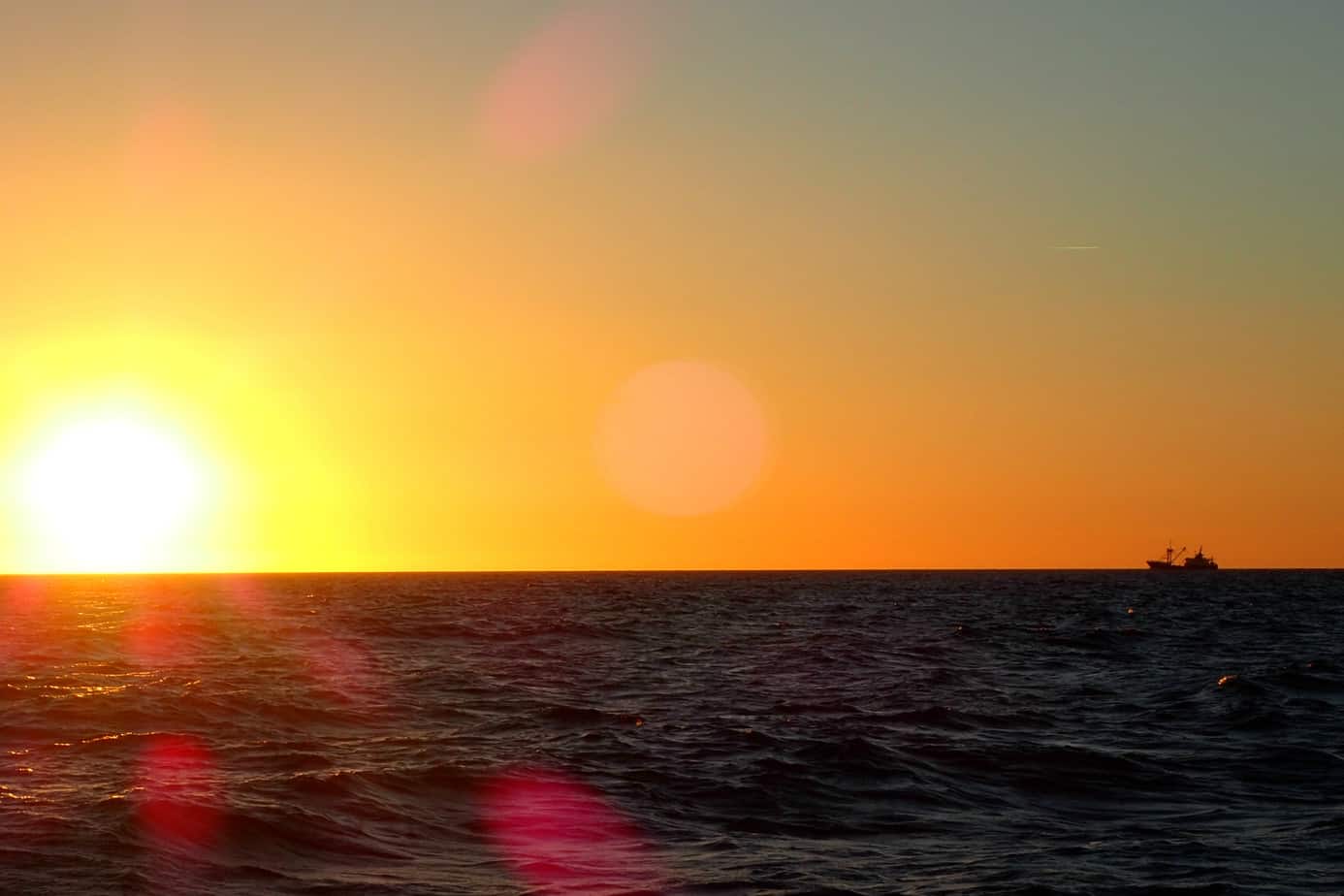