The alarm went off at 7.30am and just like the night before I didn’t hear it. I’m not a morning person when woken mid sleep so packed my bag in silence and headed out for a traditional Jordanian breakfast of salad, hummus and pitta.

By the time we set off at 9 am I was feeling much more awake and was really excited to get going. I couldn’t quite believe after daydreaming about Jordan for so long that I was about to start this expedition.

We had decided to take it in turns to navigate and I had volunteered to go first. I’ve not used a GPS before but the trail was easy to follow today. We zigzagged down into and then followed the valley floor. There are a couple of lodges in the area so we met a handful of tourists who were out doing day hikes. 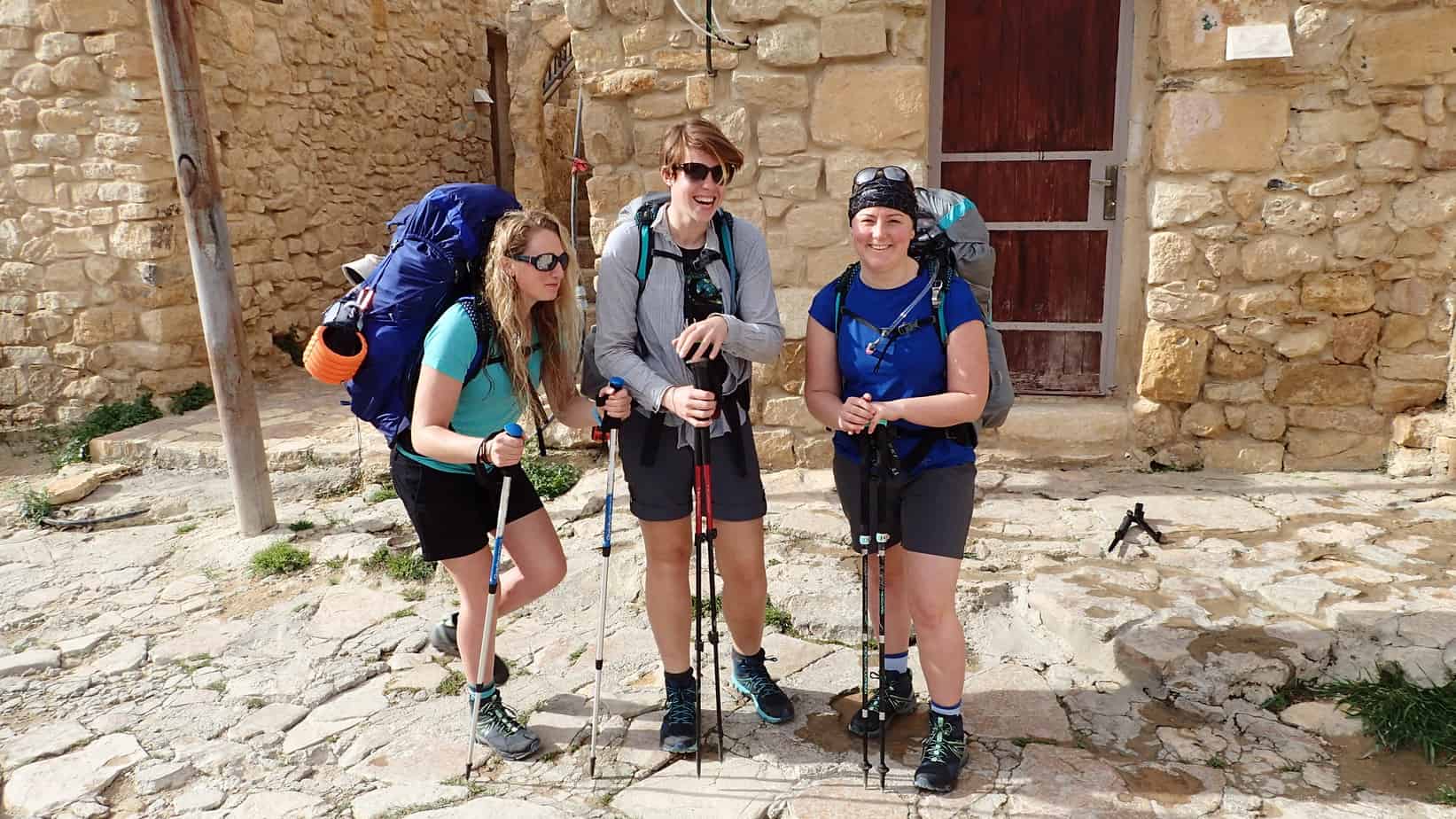 And so we were off!

Today we had 24km to hike so a fair distance, especially for day 1. The trail was downhill all day so was easy terrain, although rocky so I had to watch my footing. 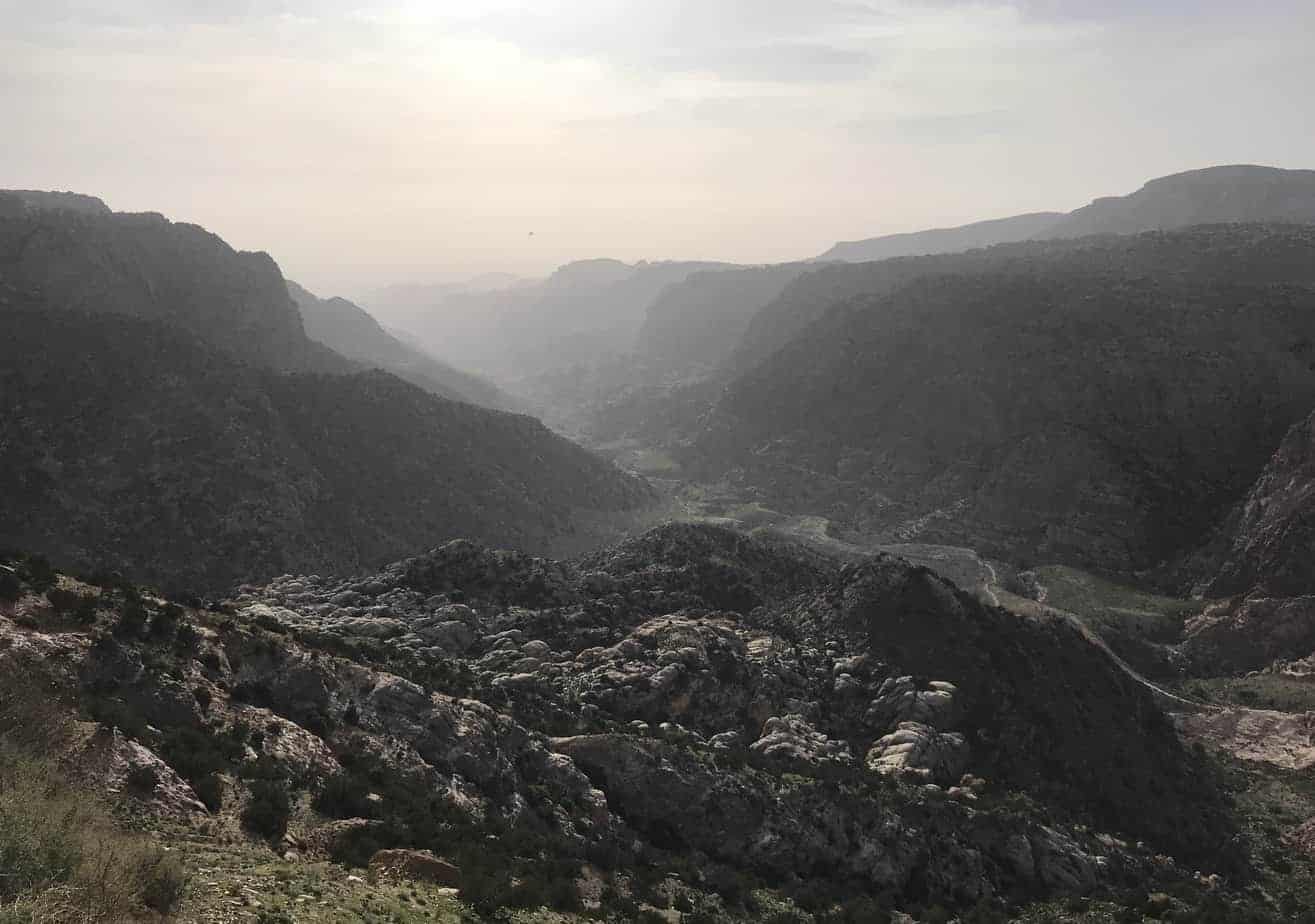 Every so often we would pass a Bedouin, either a lone male tending his sheep or a tent where a family lived. They all stared at us, clearly confused by why there were 3 women hiking on our own….we probably are quite a site with our matching gear and fair hair! 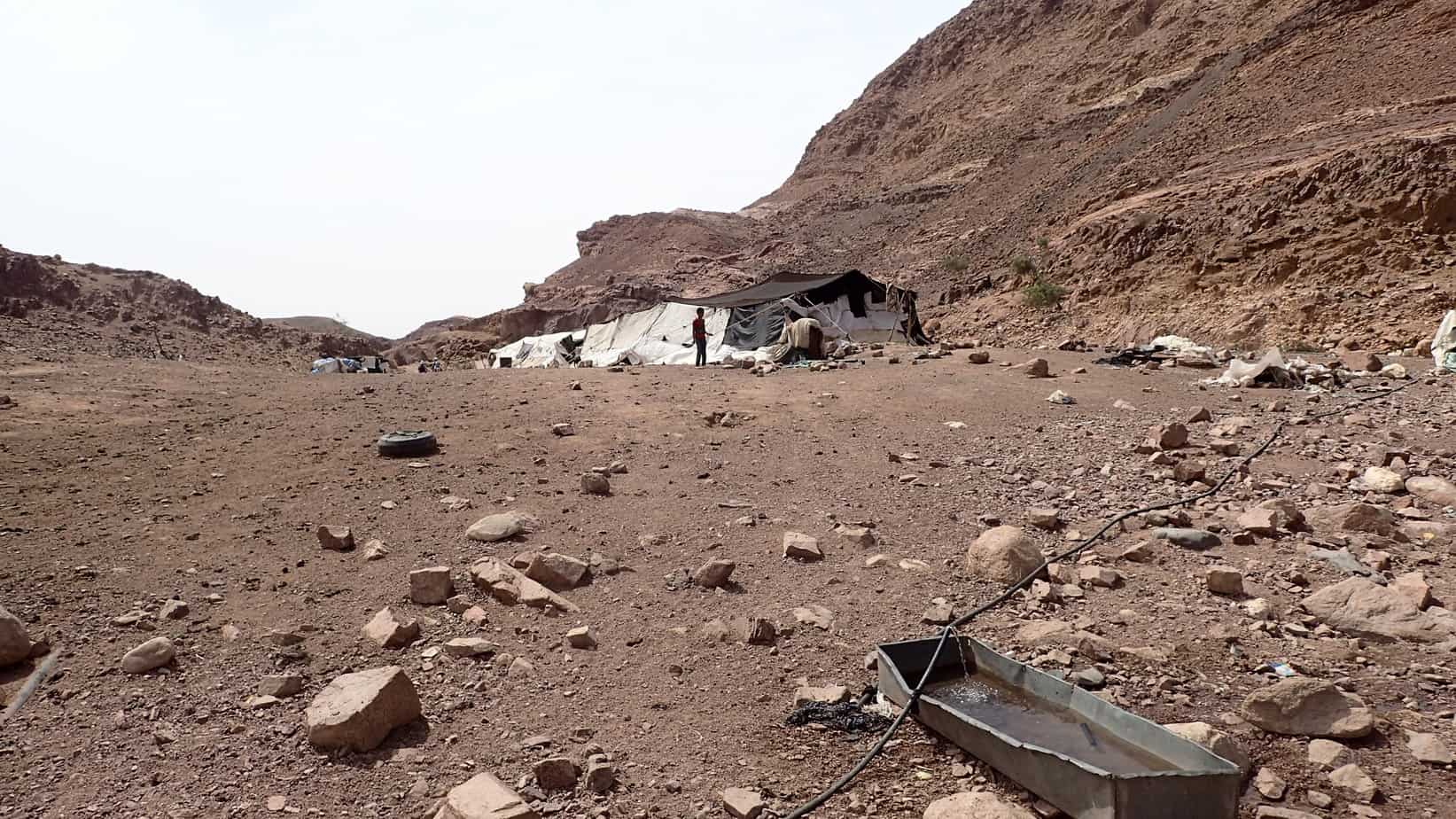 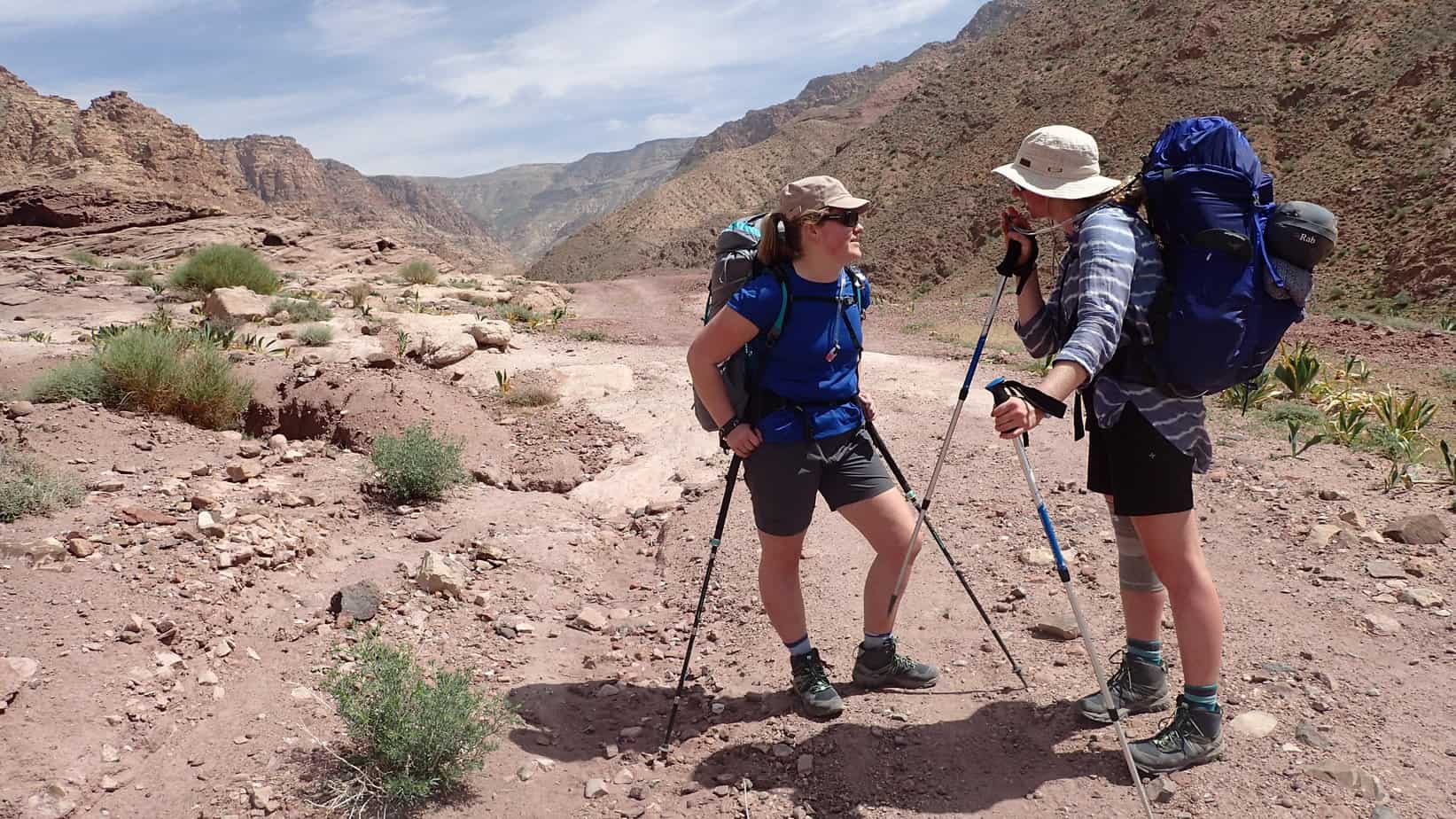 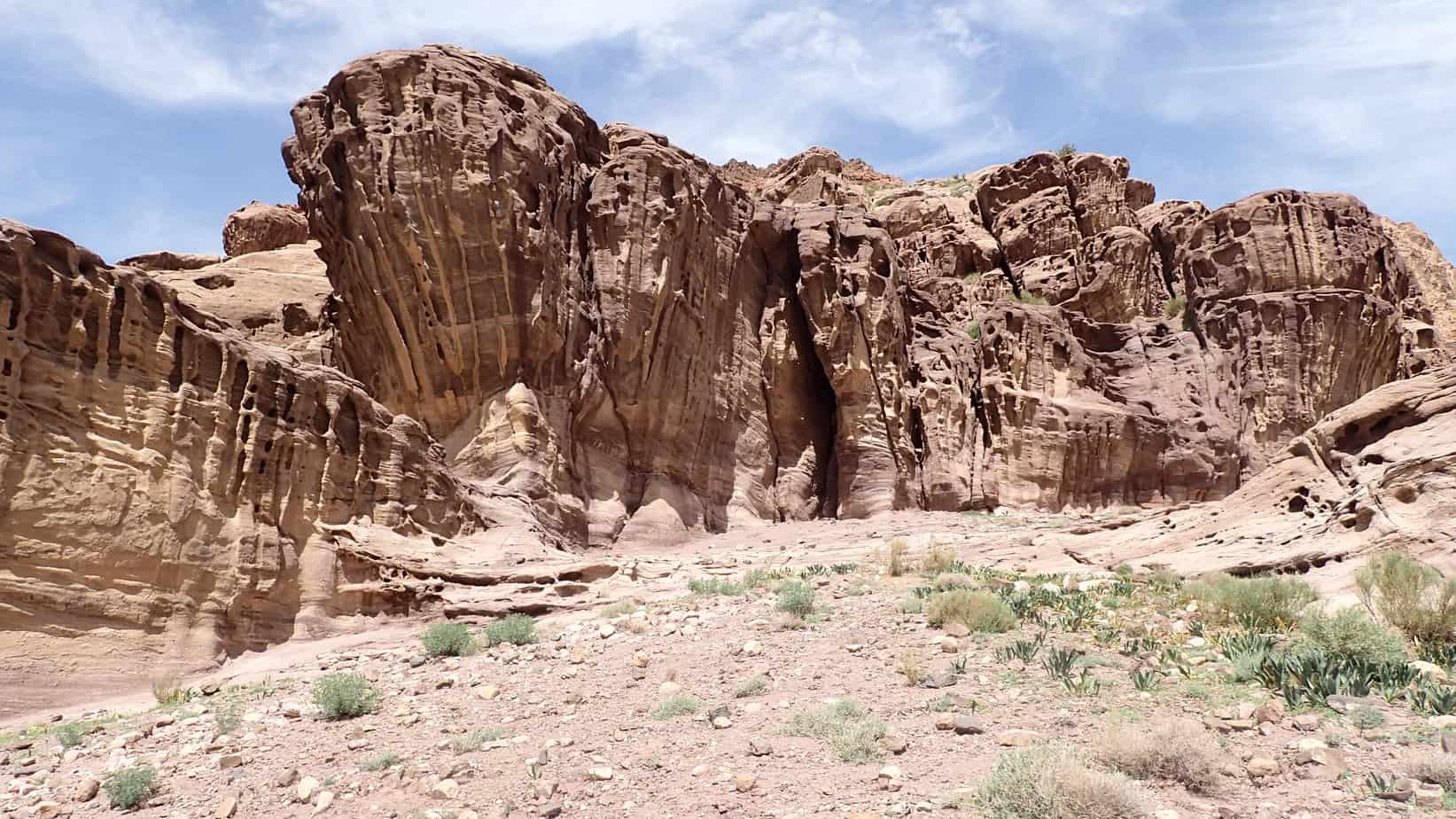 We followed the track down a 4×4 trail where we had about 12 cars pass us. Every single one of them stopped to offer us a lift and/or tea which we declined. If we had stopped with everyone who had offered us tea we wouldn’t have made it 2 miles!

We were walking really fast (about 5km an hour) but 11 am the heat suddenly hit me. It felt like someone had suddenly turned the temperature up 10 degrees. We stopped for some snacks in a rare shaded area where there were some French tourists and a guide also taking a break from a day out bird watching. The guide asked us what we were doing and then laughed when we told him, ‘3 women alone in the desert?!’

His reaction wound me up. ‘You see that woman there’ I said pointing at Mollie, ‘she’s climbed Everest…twice’. The guide started at Mollie opened mouthed and then totally changed his tune and wished us luck as we set off again. Mollie really is the best too trump card for all the men we have spoken to in the last 2 days who seemed entirely sure we were incapable of our challenge.

Cal rethinking her decision to bring chocolate as a snack for the desert lol! 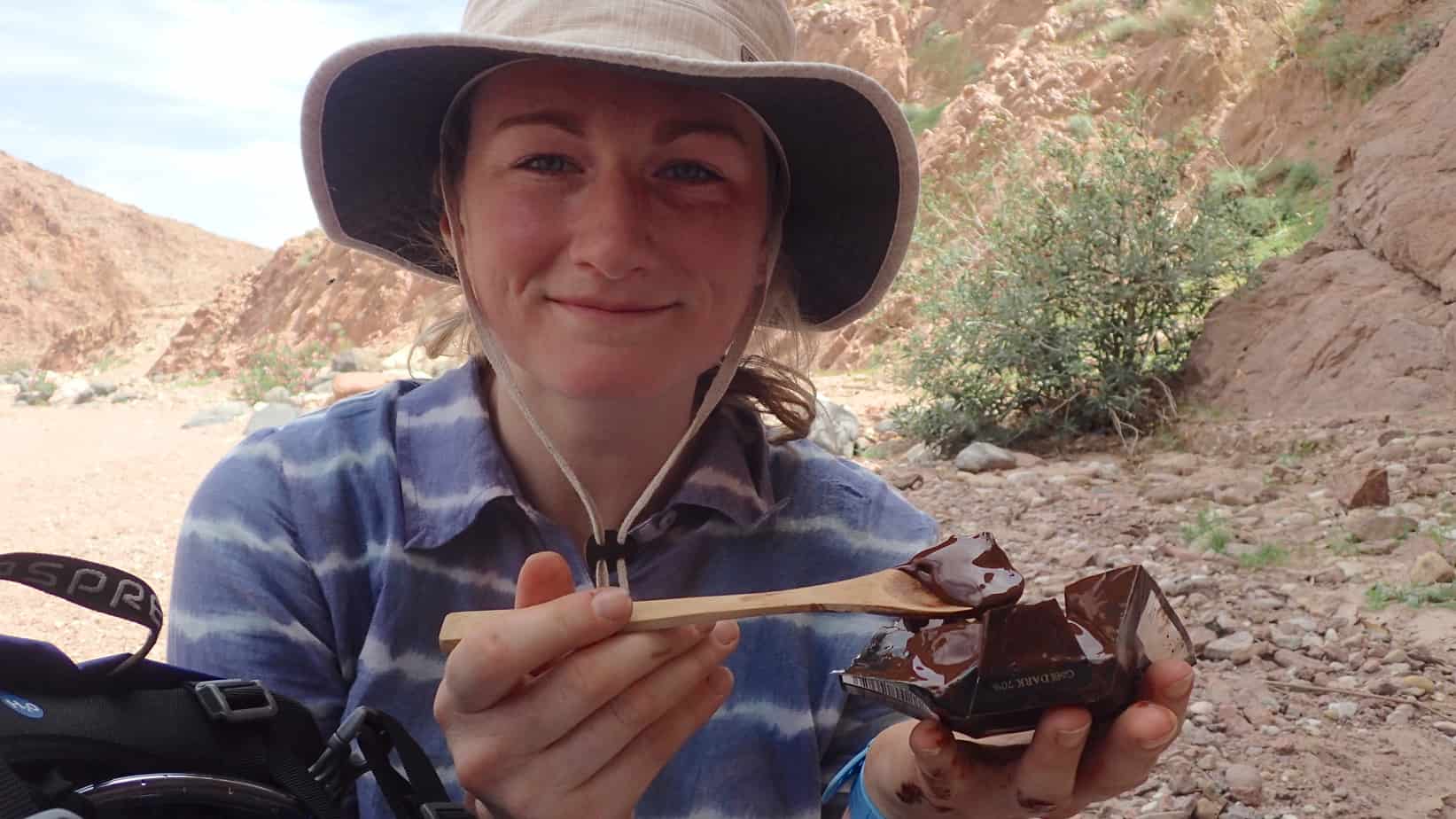 The heat was now unbearable. The sun on my face was horrible and no matter how much I drank I couldn’t quench my thirst. We started taking breaks more frequently, grabbing shade whenever it presented itself. At one of these stops, a local girl came and stood over me and was just staring while I ate my brunch bar. I knew straight away that she wanted me to give her something so made it clear she wasn’t having anything. I hate that tourists give kids sweets and gifts because it encourages them to see us as nothing more than money.

As I stood up to leave she suddenly grabbed my camera and held it behind her back! I was sure she was going to do a runner and had no doubt she would outrun me (even though she was half my height and wearing flip flops!). I reached around and managed to snatch my camera back. As I did that she put her hand in the pocket of my bag but luckily it was empty…cheeky sod!! 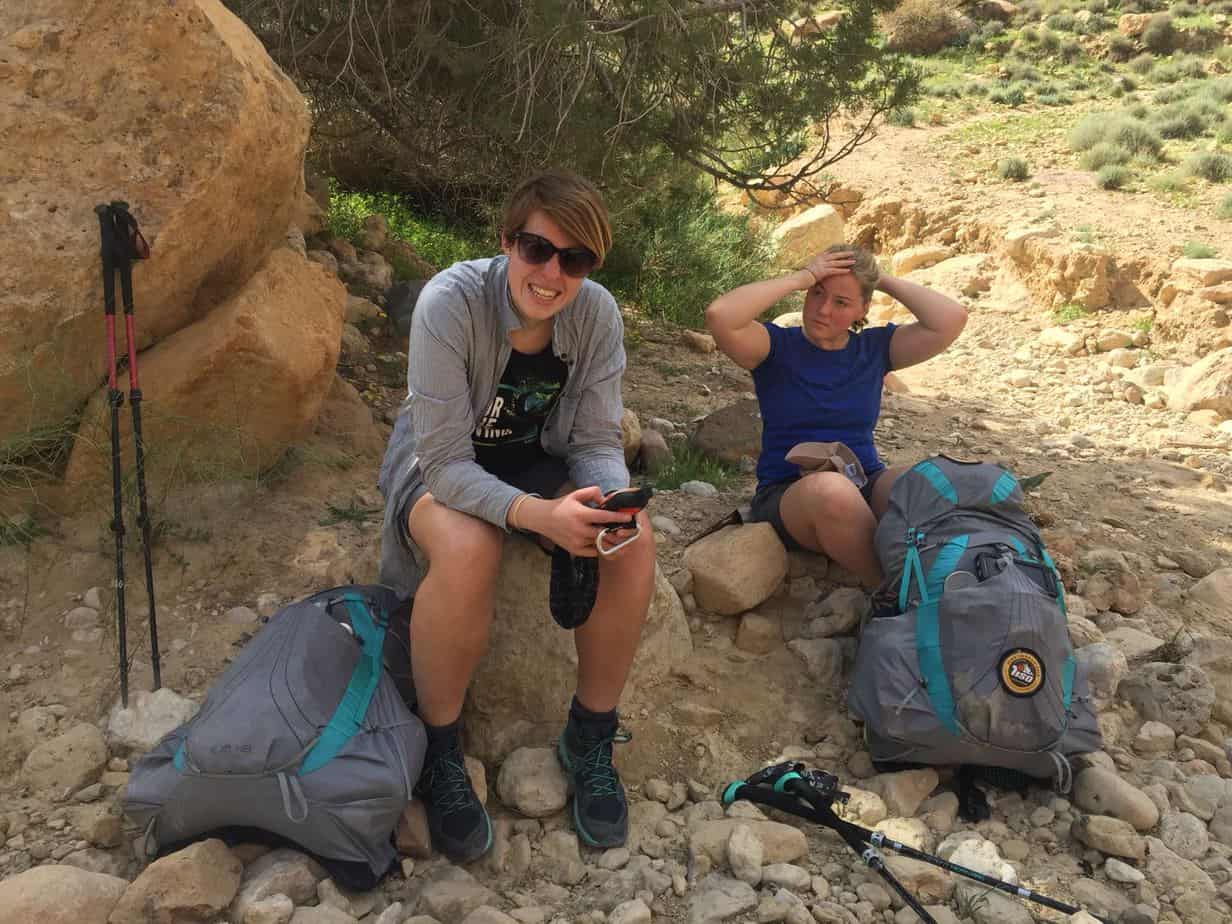 With 5km to go to our camp spot my body shut down and it became really hard work. We were all struggling. On our final stretch, we ran out of water entirely. Not good! We’d set off with 4L each (as well as drinking a litre for breakfast) but clearly, it wasn’t enough. Tomorrow I’ll take 5! 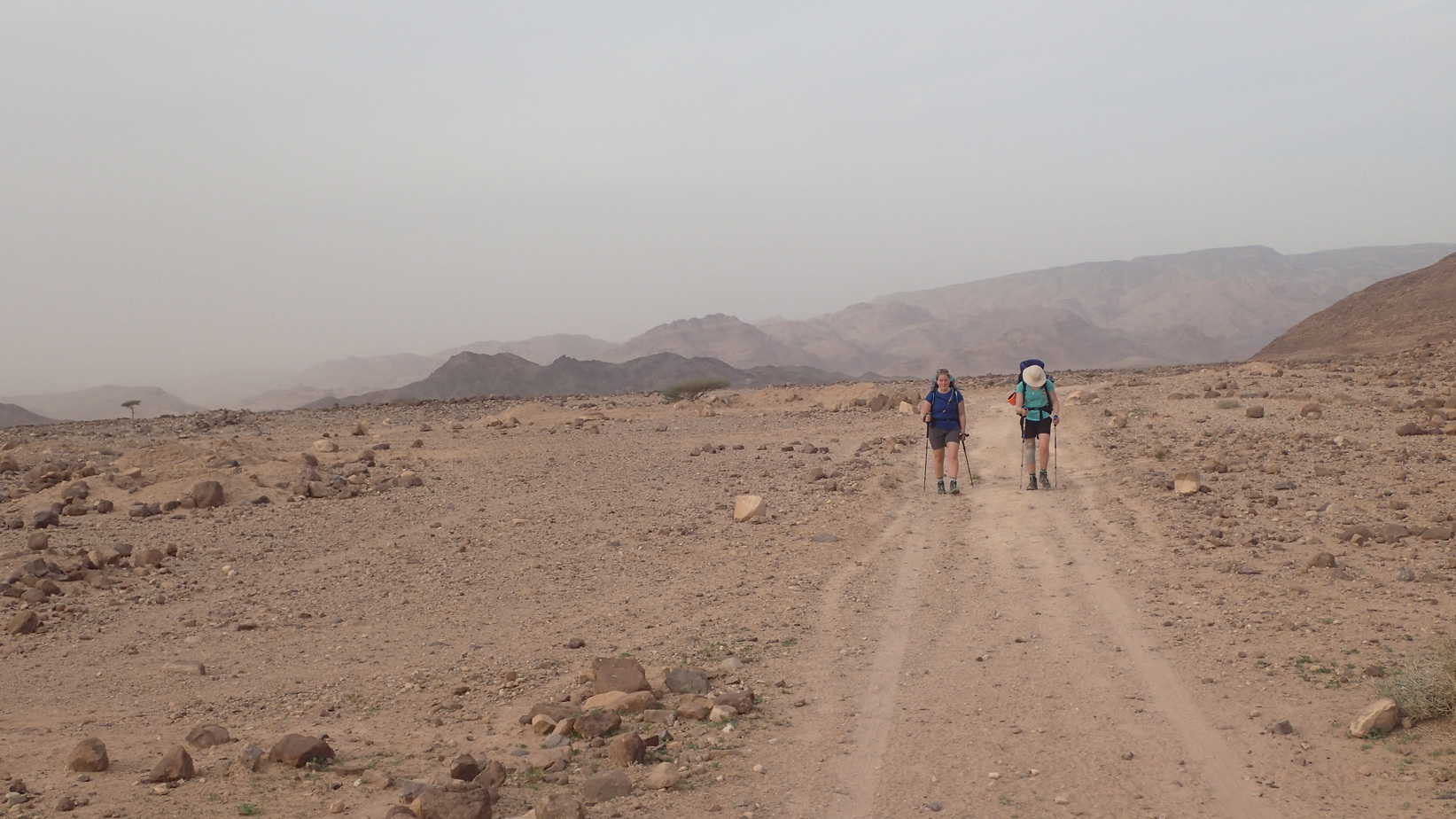 We reached the end at last and found the Bedouin, Alda, who will be bringing our water for the next 4. He was waiting for us with the best sight ever….20 Litres of water!!! It wasn’t the first time we’d seen him that day. He’d come and found us on the 4×4 track by car and kept saying he wanted to guide us. We had to call Mohamad and ask him to translate that we want to be on our own as Alda’s English isn’t good.

I know he’s just being nice and genuinely thinks we are probably going to die but it’s a bit annoying!

We put up the tents (while being attacked by a swarm of flies). Mollie got the water boiling for dinner and we sat in the dark chatting adventure. It felt so good being in the quiet of nature, such a contrast coming from London. 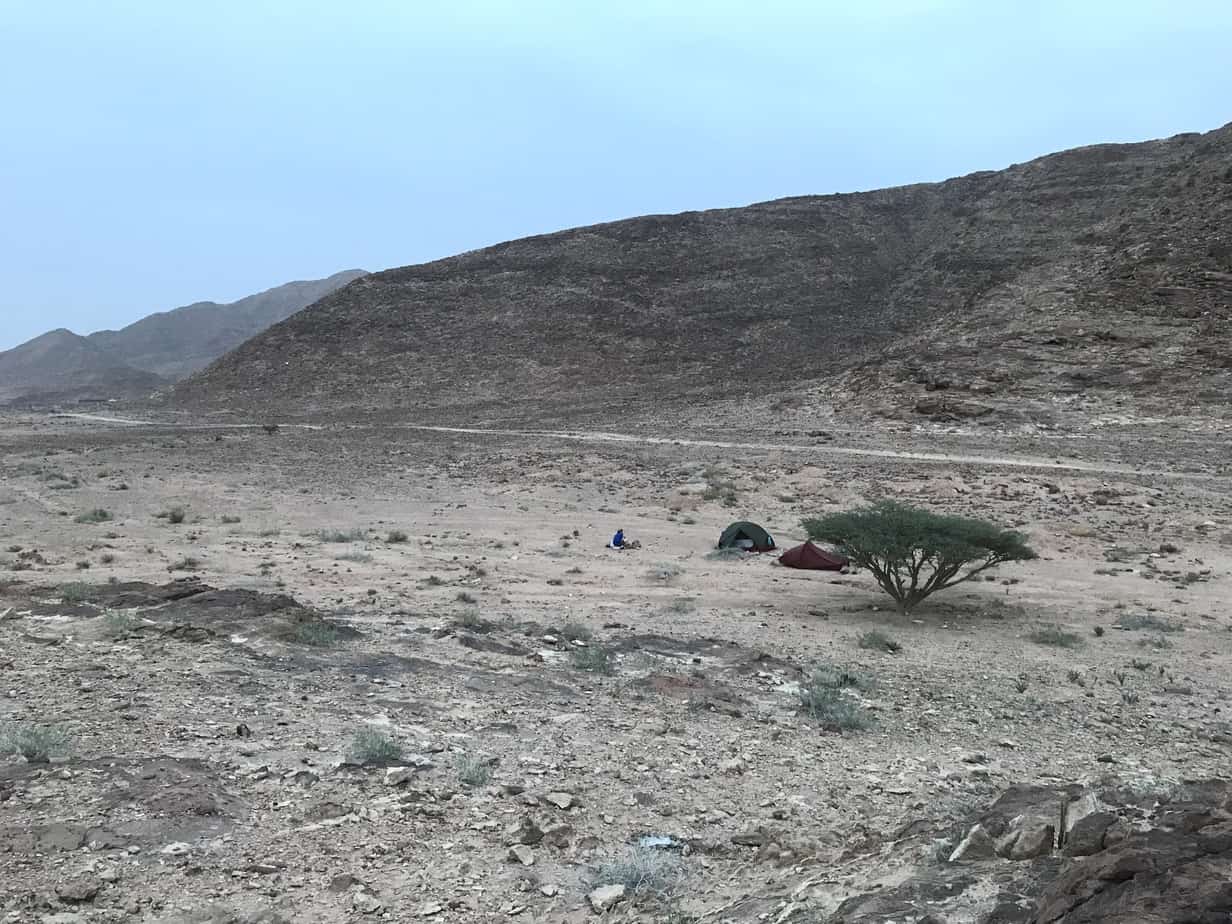 Mollie found a socrpion under her tent. Scorpions and snakes are a real threat in the desert. We need to be wary of both – shaking out out boots in the morning and checking behind rocks before we take a seat on them.

It was a really cloudy night so there were no stars, but worse than that it meant the temperature barely dropped. I could tell it was going to be a painfully uncomfortable and hot night.