It was hard to leave the comfort of the hotel bed but today we couldn’t risk taking our time as we had 22km and a scorching hot day ahead of us. I tried to eat as much breakfast as I could. It was a weird mix – chips, salad, cheese and bread. I also shamelessly pinched some dates for lunch.

We headed back to Petra to rejoin the trail where we left it. When we got to the gate there was a problem…always! Apparently, we had brought the wrong ticket (despite clearly being told at least twice that what we had was right). The ticket office man yelled at us to go to the main gate. The main gate man yelled at us to go to the ticket office. After half an hour of faffing, phone calls (who do they call??!) and providing proof that our tickets weren’t stolen by showing photos of us inside Petra (!!!) we were allowed back in. Yey!

Back on the trail

My body felt a bit stiff starting out, especially as we had a big climb early on, but I was well rested and full of energy. It was such a humid day, I was sweating loads already. I coul tell it was going to become unbearable hot later on (even though it was still only 7am). 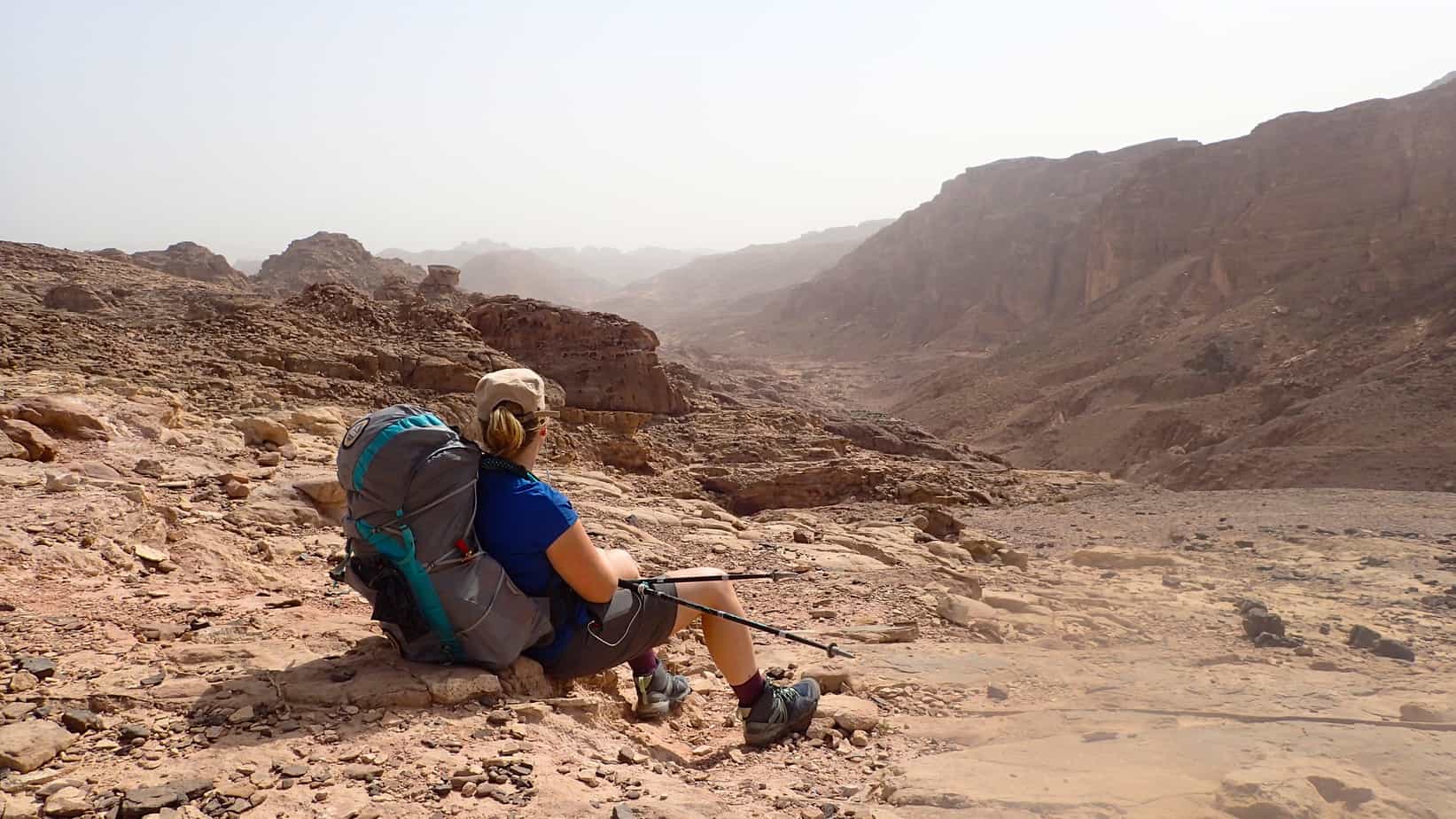 At the top of the climb we stopped for a tea with a Bedouin and chatted to a Scandinavian couple who were hiking the Jordan trail…the first other hikers we had met. They told us we had been ripped off by our ‘water support man’ as we’d paid almost 4 times what they had (I always find it strange when people feel the need to tell you these things after it’s too late to do anything). They seemed pretty hardcore and had already been walking for over a month so I was sure they’d power off ahead of us but when we set off it was us doing the powering. One nil to the Brits!

We managed to keep a really good pace all morning and stopped for a break at an ancient amphitheatre. I’d saved a couple of slices of pizza from the night before to have for lunch which was pretty tasty. When we set off again it was 1pm and right in the heat of the day. Just as I predicted it was HOT!!!

We were following the Wadi floor for the rest of the day. View wise it was great with towering mountains on either side but there is zero breeze.  I felt like my skin was literally melting. My ears had burnt and my heat rash all over my legs, stomachs and back flared up, both of which stung and hurt a lot. 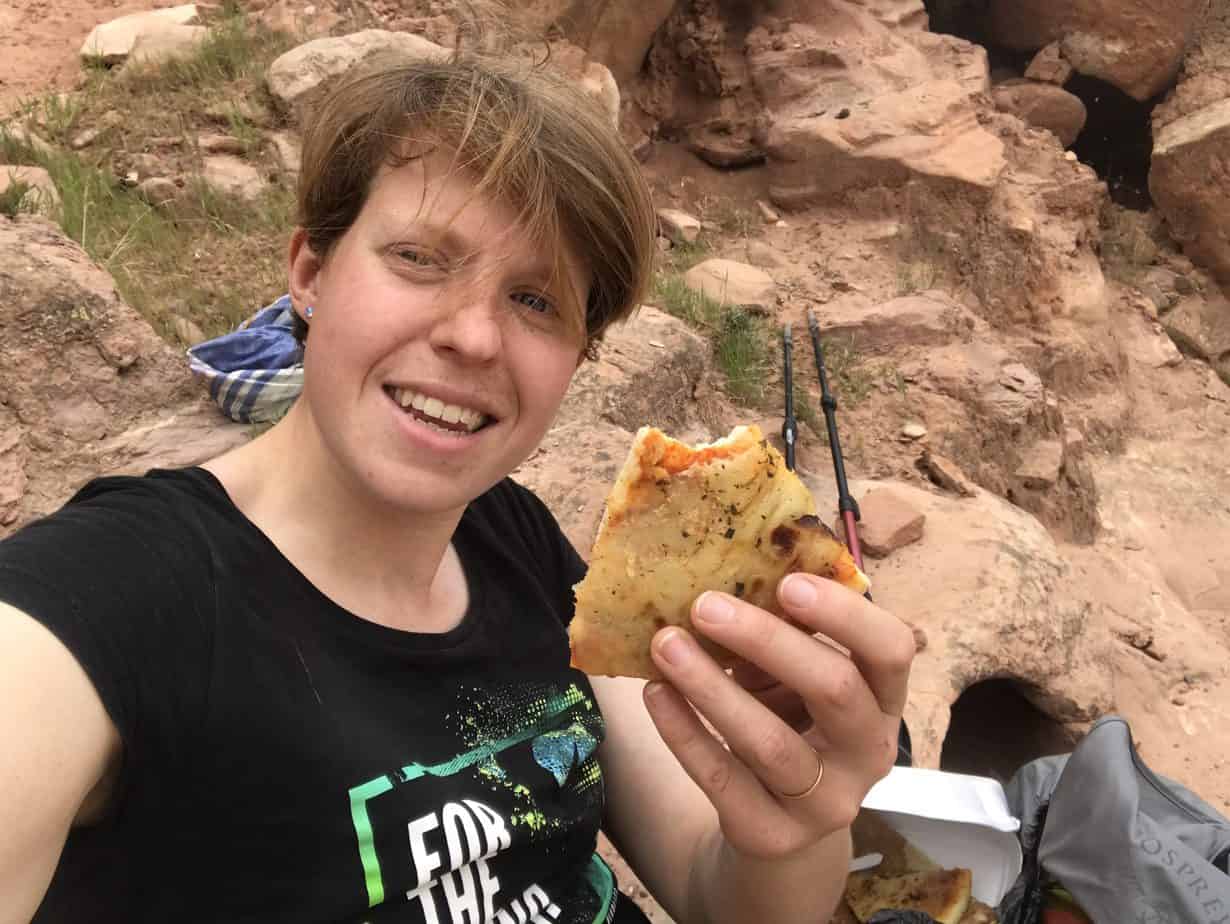 After an hour of sweating and plodding along, we spotted a tree with a tiny bit of shade and all collapsed under it. Within seconds we were being swarmed by flies. Those things are so annoying! They go for your eyes and just won’t keep still. I really hate flies.

No break for us then!

The next 2 hours to camp were hard for all of us. I was just ready to get out of the sun now. We all plugged in our music and got our heads down to finish the last few kilometres. Music always does so much to lift our spirits.

Our photographer was waiting for us at the end of the day to take some photos of us setting up camp. There was an organised tour group setting up their tents where we were intending to camp so he drove us to a spot away from people. We will get him to drop us back where we finished up in the morning.

I pitched the tent, Cal started and fire and Mollie got the water boiling. I attempted to wash some of the dirt of my legs and heat rash….a fairly pointless task as within half an hour they were covered in dust again. I had couscous for dinner. 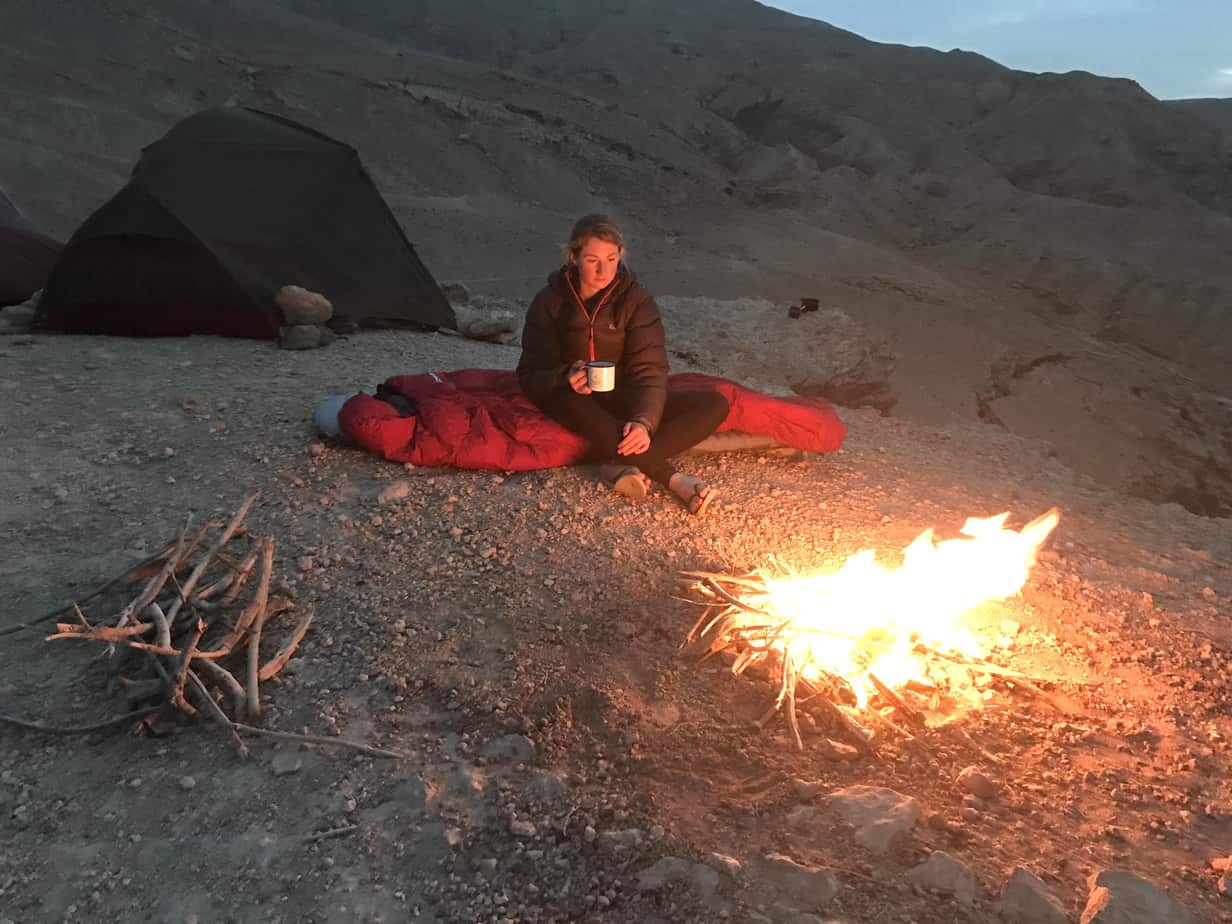 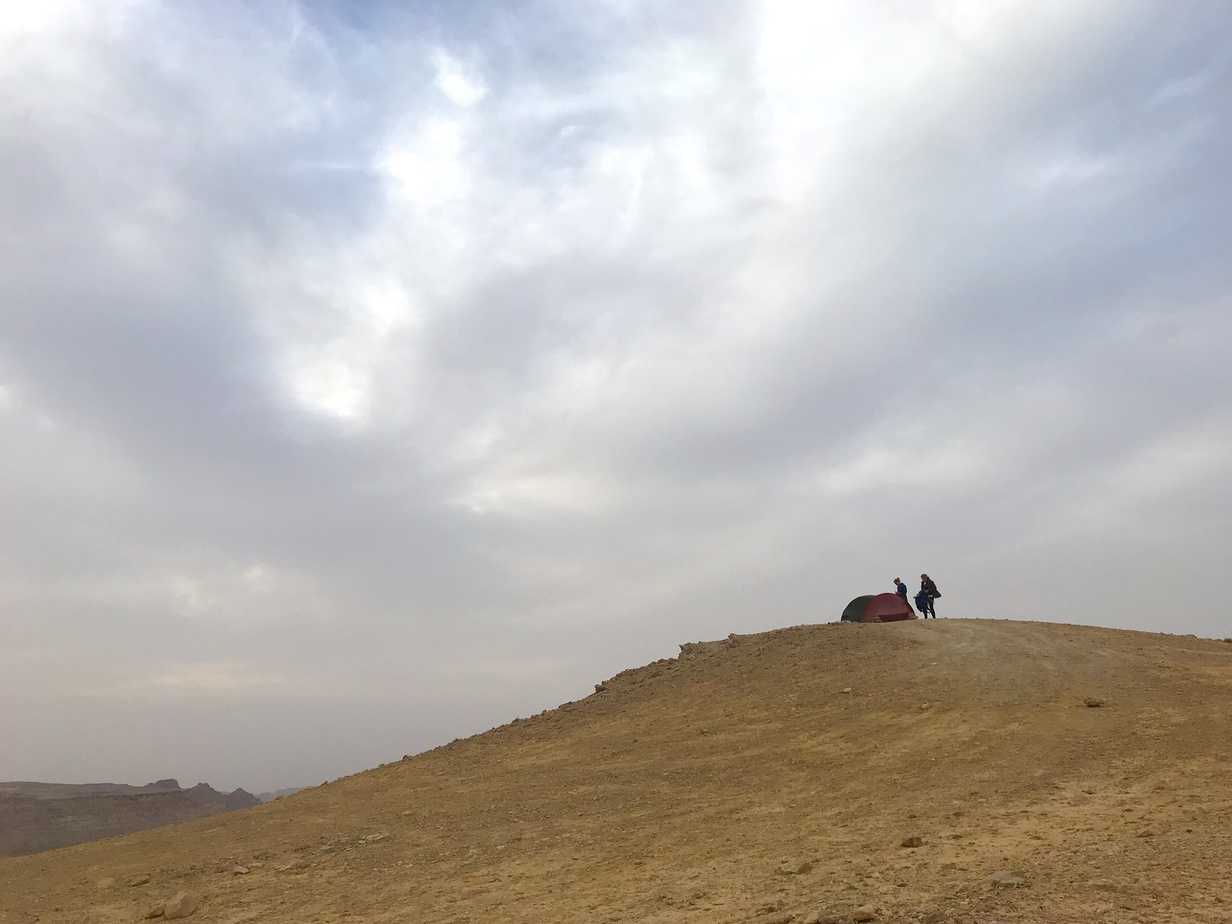 We sat around the fire for a bit but we’re suddenly hit by really strong winds. We were hoping it would die down but 30 mins in we were forced to move the tents to a slightly more shelter spot. The winds only picked up making it a faff getting them secured. Even in the tent it was impossible to escape the sand which came in through the ventilation system and covered everything in a thin layer. What I’d give for a shower! Only 5 days to wait 🙂

I was hoping the winds would die down soon but as I found out a few hours later, that just wasn’t the case….