Catch up on my previous daily instalments: Travel day, Day 1, Day 2 and Day 3.

We were packed down and leaving camp by 6am. The easy 4 x 4 track turned down into a valley which switched between sandy and rocky terrain. It was a fairly easy start to the day. As we reached little Petra the valley narrowed into an opening just 1 metres wide in places. Here we passed sellers and their stalls selling trinkets. Most of them lay sleeping on thin mattresses under their stalls. It was still too early for passing trade. A cute little puppy decided to befriend us for the next km! 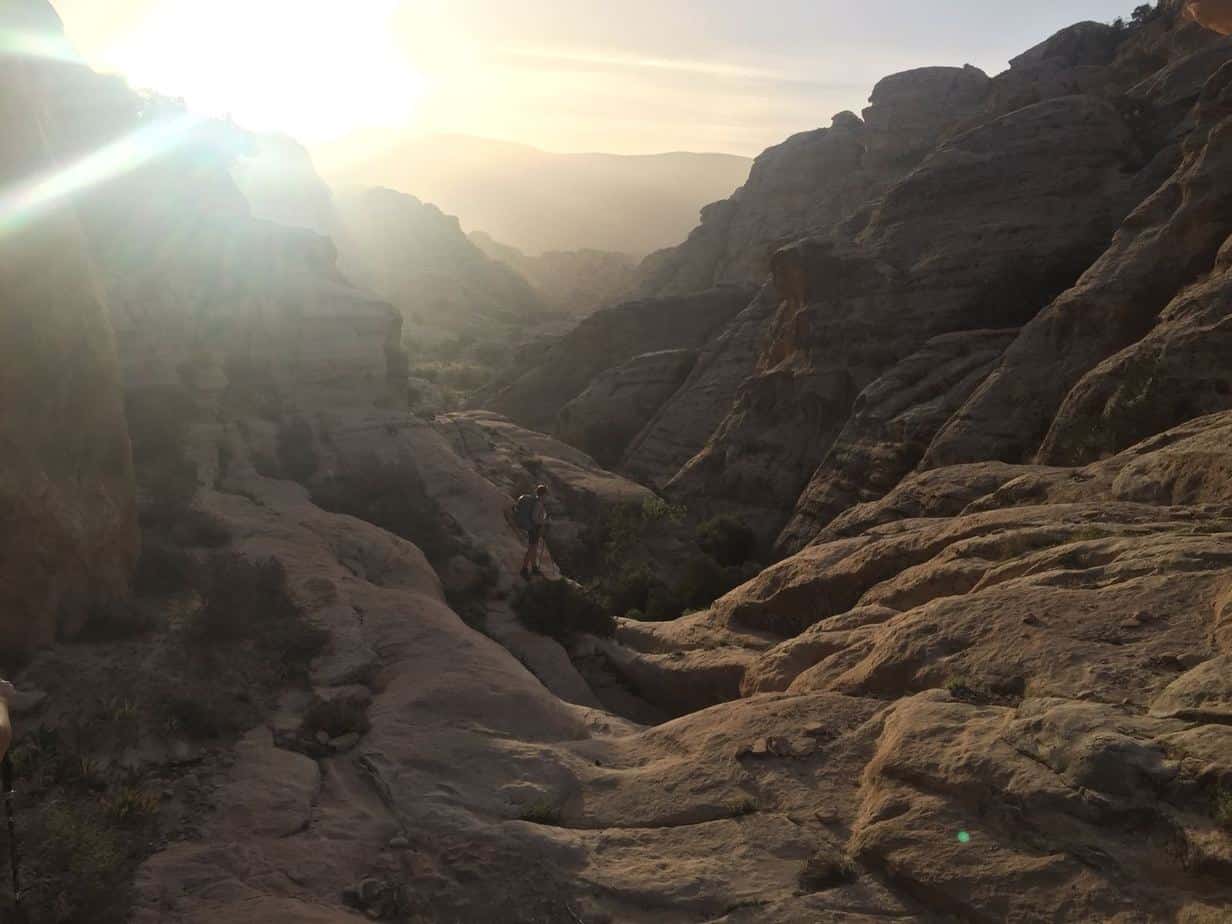 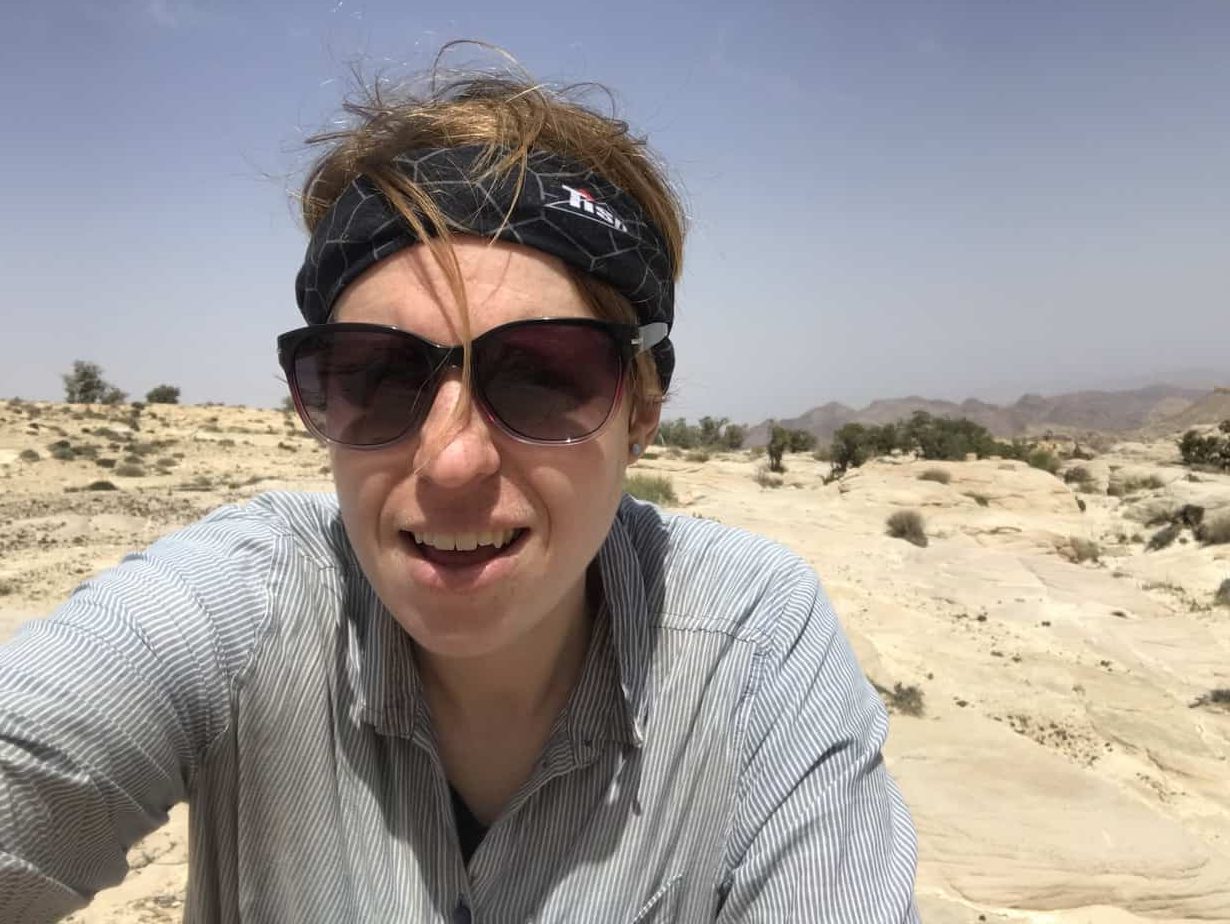 Our pacing was slow but steady so we were making good time. We left Little Petra and followed another 4 x 4 track which led us to Petra reserve about 3km away. When we reached the entrance a guard told us we needed to buy a ticket for Petra. This we already knew but had assumed we’d be able to get it when we reached the main entrance which was at the end of today’s hike. Apparently though we needed it to enter from the back way too. There was no way for us to buy a ticket here and the guard kept telling us to head back the 3km we had come to buy a ticket in Little Petra instead. ‘It’s just 10 mins’ he kept saying…maybe by car!!

After a lot of begging and phone calls and explaining how we were doing the Jordan Trail and how much we loved the country and the country (aka brown-nosing!), he said someone would bring a ticket to us. Result. The 10 minute wait turned into almost an hour. Eventually, a guy showed up. He came over and told us another guy was on his way, ’10 minutes’!

Then the ‘other guy’ showed up only he didn’t have the tickets with him. He then insisted we pay him the 150 Dinar (about £150) for the tickets and said we can pick them up at the main entrance. He handed me a scrap bit of paper with Arabic written on it which was supposedly proof we paid.

Hmmmm….It was totally dodgy but I was beyond caring as we’d already wasted loads much time and we’re eating into our restful afternoon.

As soon as we entered the reserve the tourists started cropping up. They looked so clean and smelt so nice!

I got charged by a camel which was anything but funny. Those things are massive and scary as!! 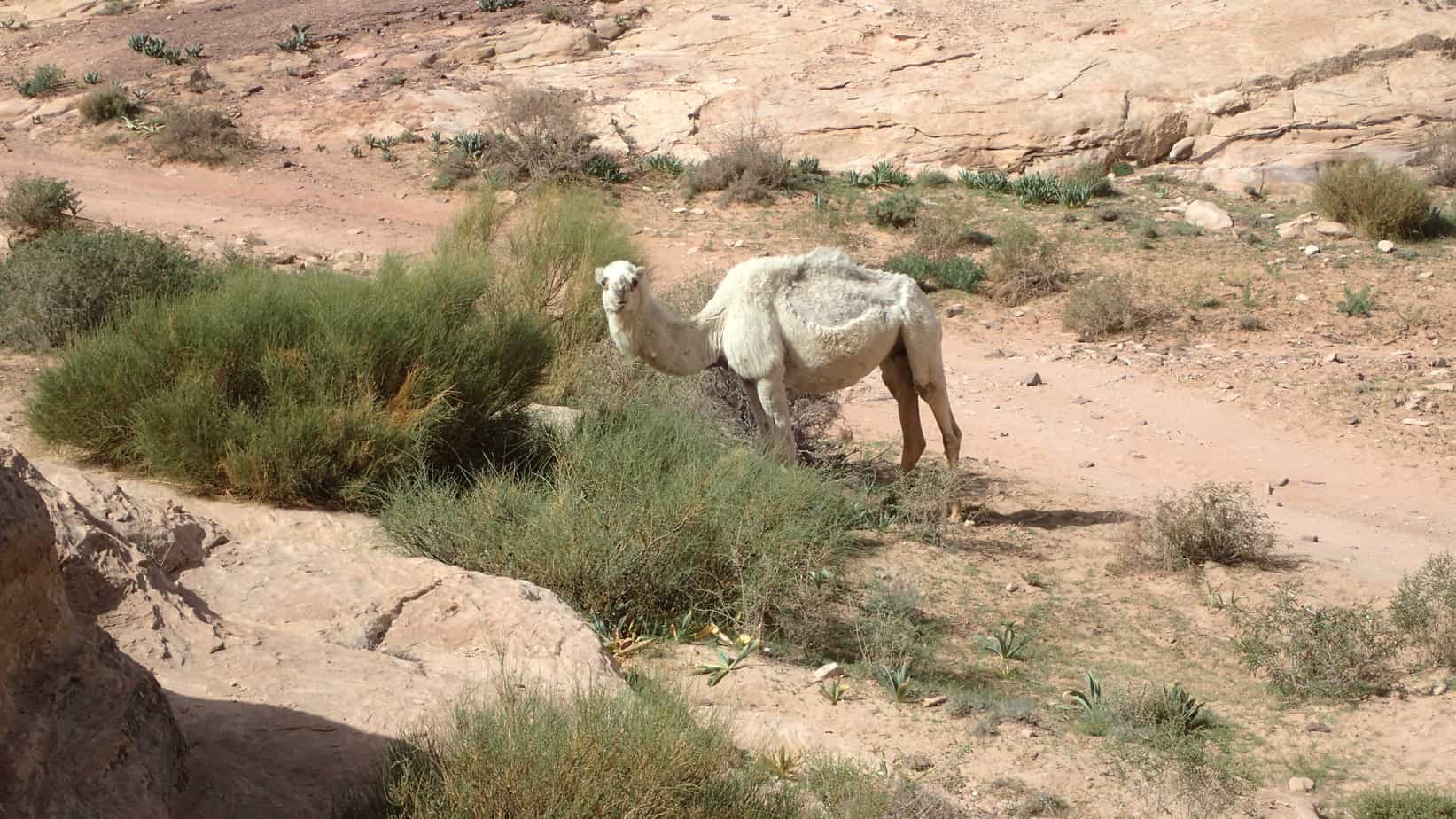 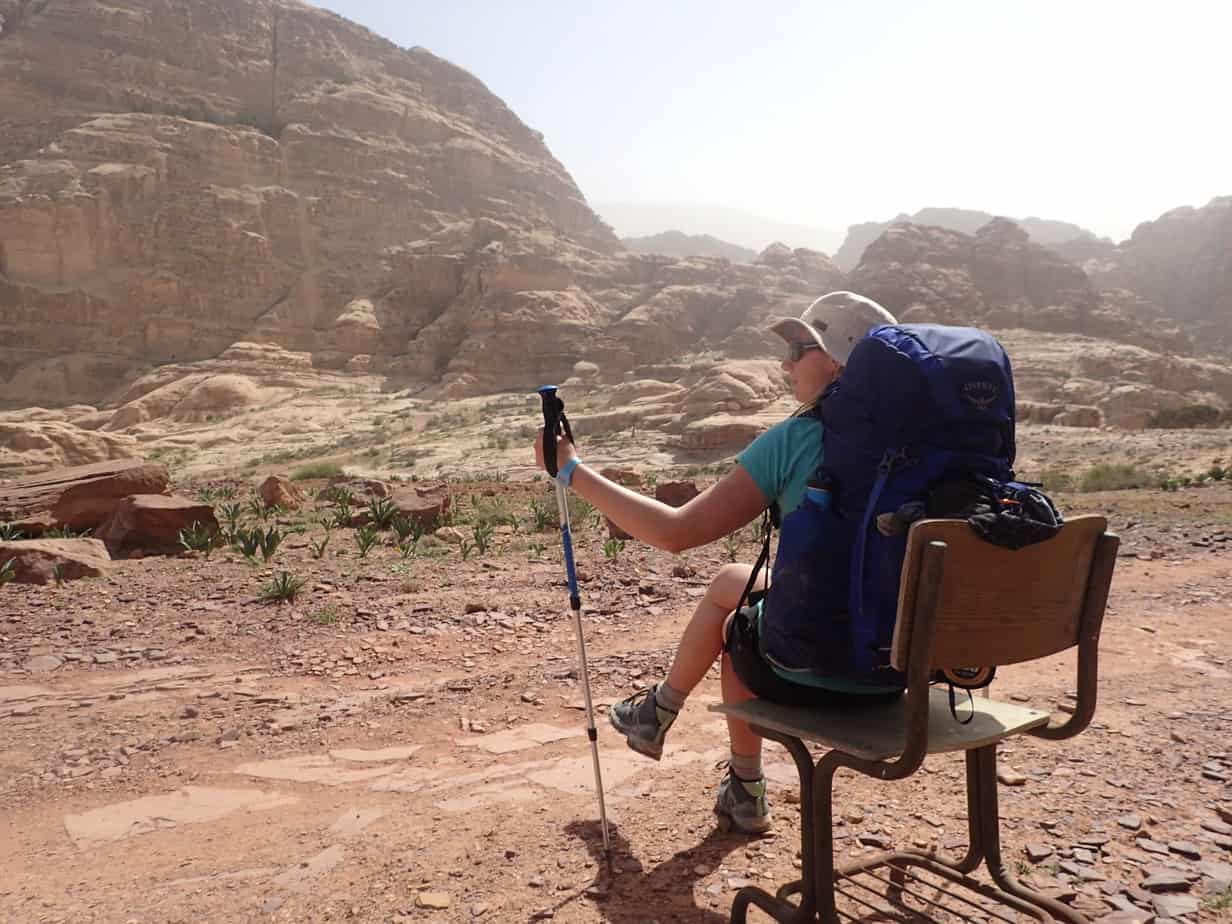 My first sight of Petra was of the monastery and I was in awe. It was such an incredible sight to see this structure carved into the mountain. We ran to the cafe that sat opposite the monastery and ordered a glass of mint lemonade each and a hummus wrap. We then ordered another of each and a KitKat. 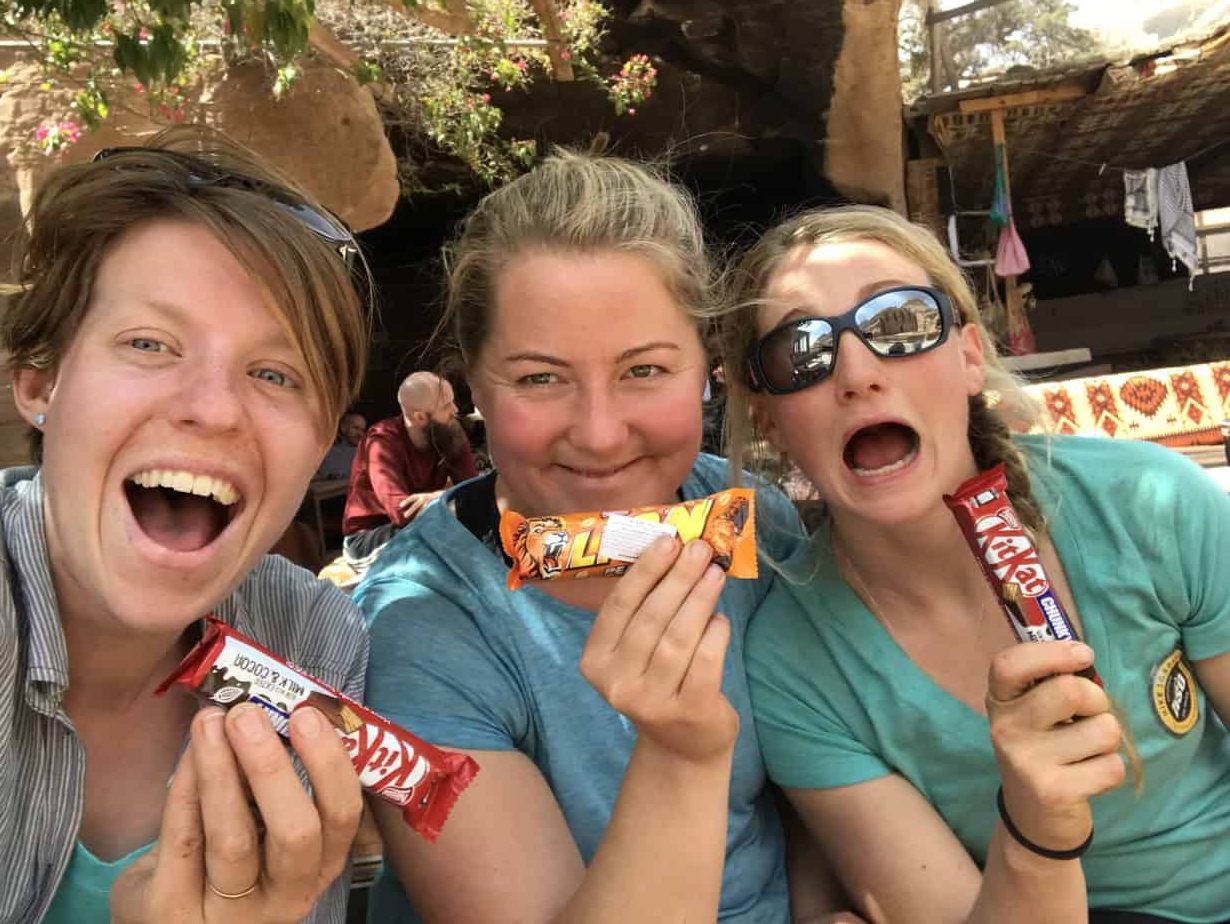 Our photographer had arranged to meet us here to get some pictures of us and the surroundings. He would also be joining us for half a day on the next section out of Petra. We did some photo shoots. I didn’t even have a photo shoot at my own wedding so it felt pretty weird for me. We were so sweaty and matching and all the tourists were staring at us getting our pictures taken…I don’t blame them! The pictures were amazing but I definitely prefer natural shots, even if I am always pulling a weird face and looking my usual scruffy self.

After so long in the desert, it was super strange being in amongst tourists and crowds, although I quite liked the hustle and bustle and chatting to people who were wondering why our packs were so heavy.

Petra was stunning. We meandered down a path for about an hour with caves carved into the rocks on both sides, until we reached the iconic Temple. Wow, wow, wow!! I tried to imagine what it would’ve been like as a Bedouin city with 20,000 people living here in all the caves. Humans are epic! 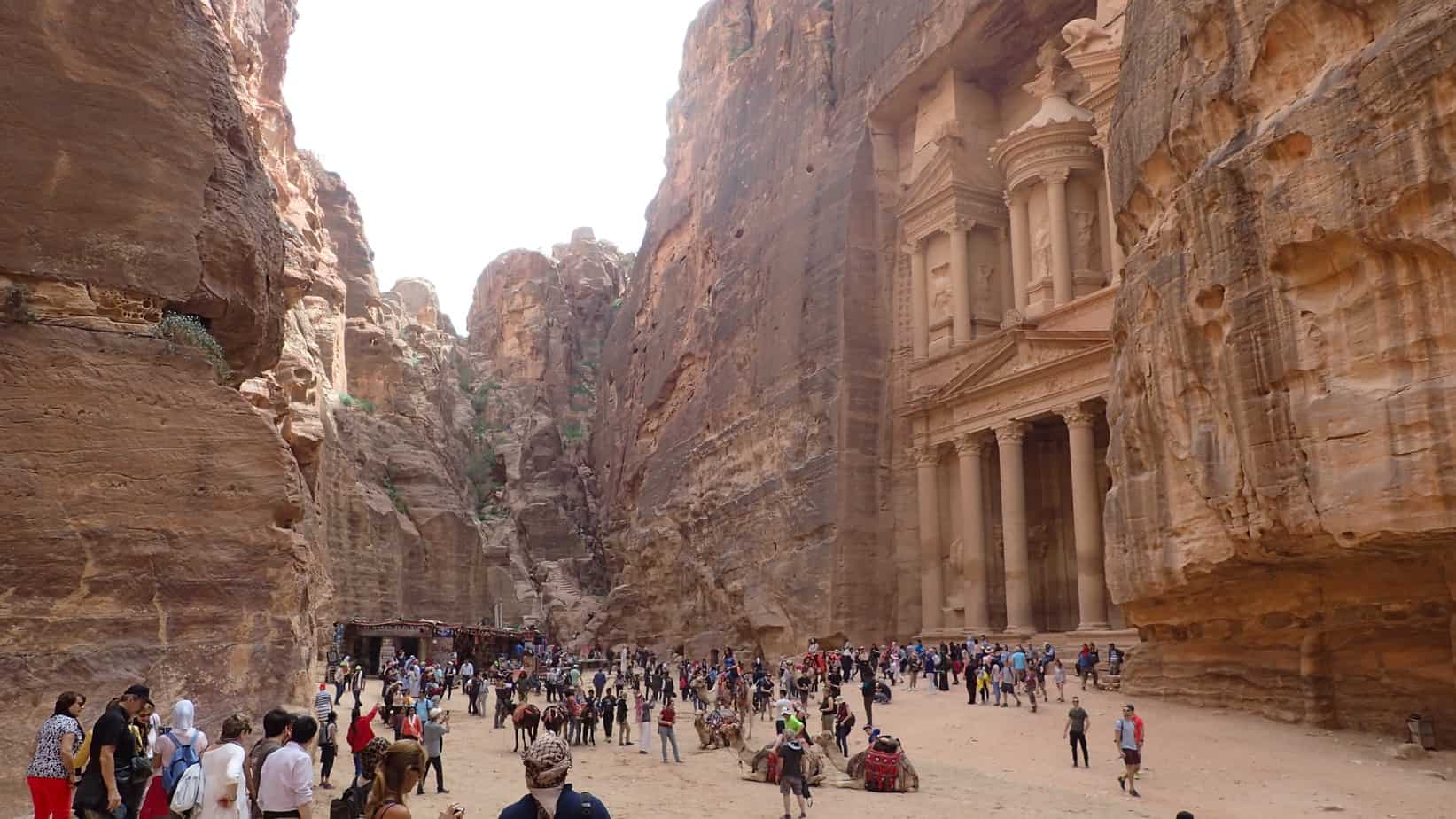 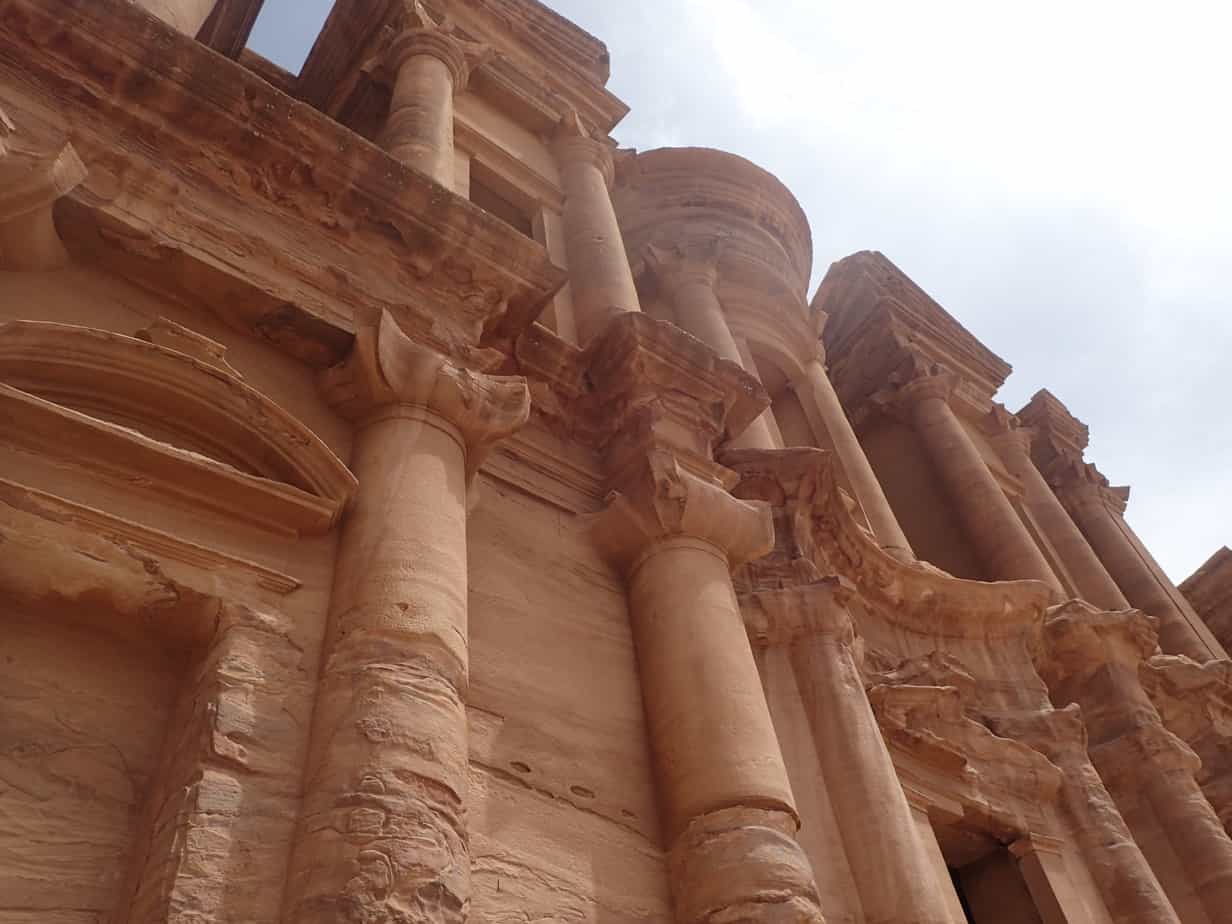 By this point it was crazy hot and nearing 2pm so it was time to head to our hotel. We were flagging. I attempted to collect our ticket from the main desk (which we’d need to pass through the next day)….more phone calls and much discussion. I had to go back and forth between various desks but, eventually, had the tickets in hand. My patience was flagging.

Our photographer drove us to the hotel where we had made our reservations online for 2 rooms. I couldn’t wait for that shower. I practically ran into the hotel I was so happy but then…..oh, wait, another problem! At first, they told us they only had 1 room for us because they were full. Then they told us they had no rooms. The 2 guys on the desk were so rude and unhelpful. Seriously??

About an hour later we were checked into a different (more expensive) hotel. There was no hot water so I didn’t enjoy my shower so much but at least I was clean. I sat in the hotel restaurant for a bit, checking in with loved ones using the WiFi and ate a salad (mmmm fresh food). Civilisation!

The most spectacular sunset I’ve ever seen!

Mollie and Cal headed out for dinner but I decided to have a bit of downtime in the room. I listened to some music and was lucky enough to catch this view. It literally took my breath away! 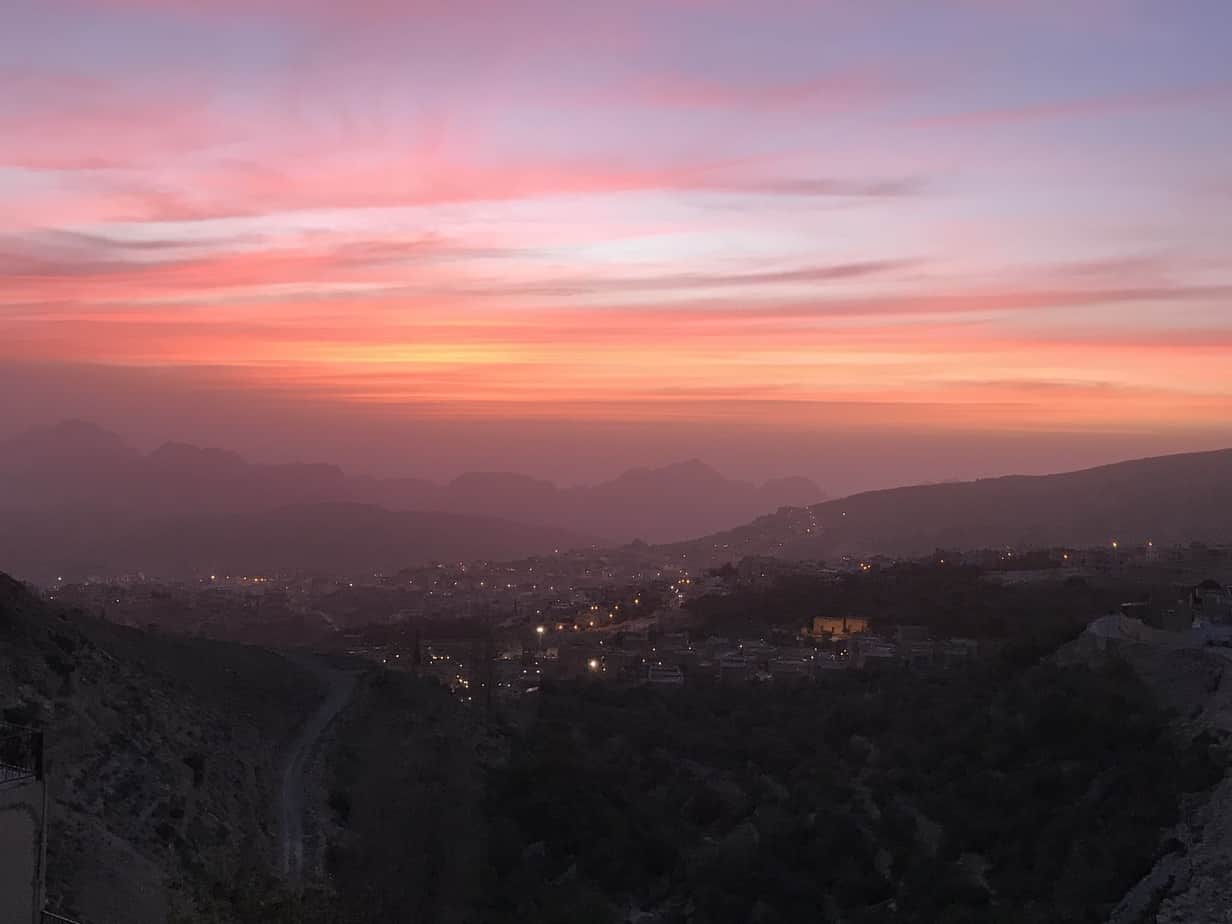 Our water guy, Mohamad (yey, my favourite person) then called to say that now we are going to have a rest day tomorrow (we’d requested it 2 days ago and he had refused). I’d just packed everything and was psyching myself up for the next day’s hike. It made sense to take the rest day so Mollie could rest her feet but it was annoying that we were stuck in this lousy hotel. Plus we could’ve skipped seeing Petra while carrying our heavy packs.

Later that evening we headed back into Petra for the night show. We grabbed a quick drink first where a nice American couple, Frank and Christine, kindly bought our drinks after hearing what we were doing. It was pretty cool seeing Petra all lite up my lanterns but the show itself was pretty naff. About half an hour in both Mollie, Cal and I had fallen asleep so we made a speedy exit for our beds. 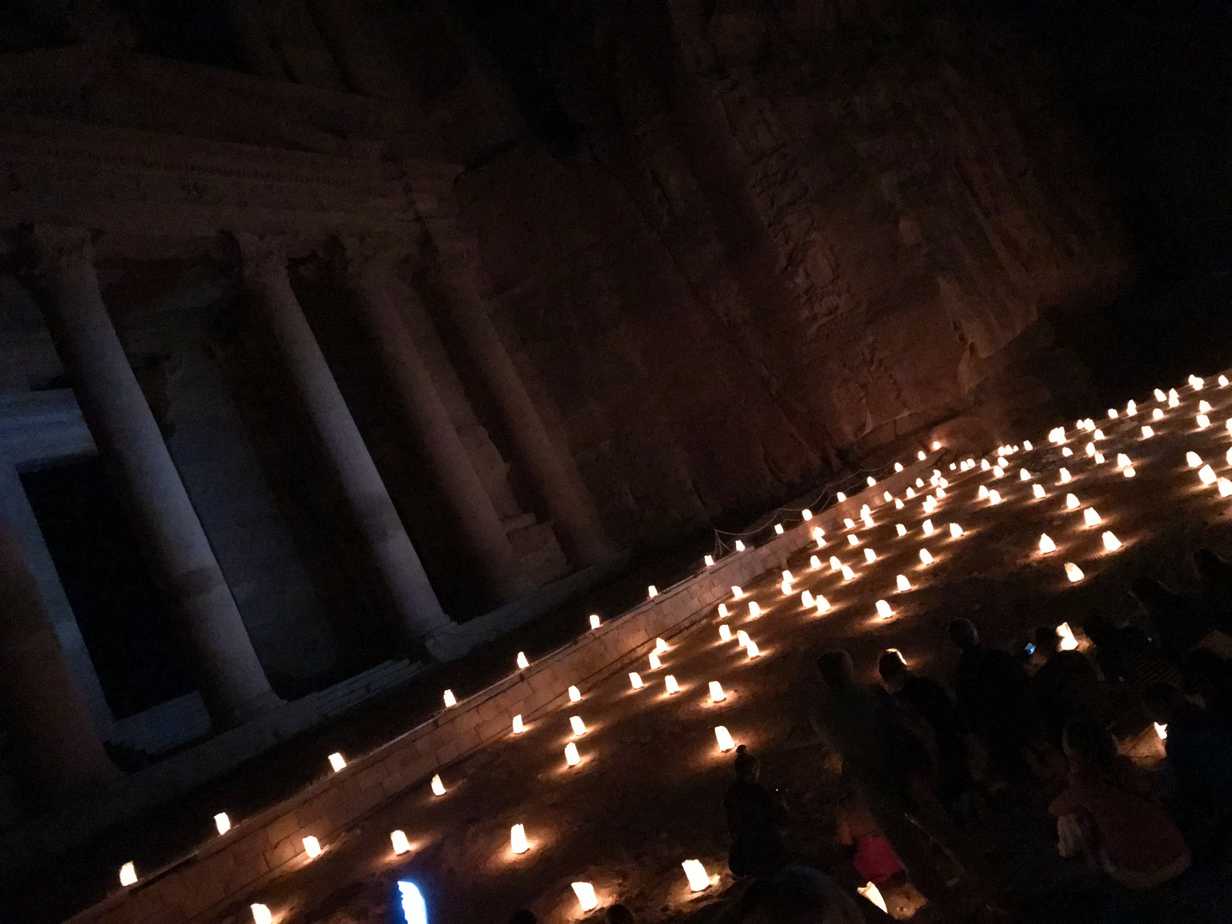 A full day to rest

The morning was pretty slow. I wanted a lie in but was up at 5am and unable to sleep. I killed some time on my phone and with going back and forth to the breakfast buffet as much as I could until Mollie and Cal woke up. 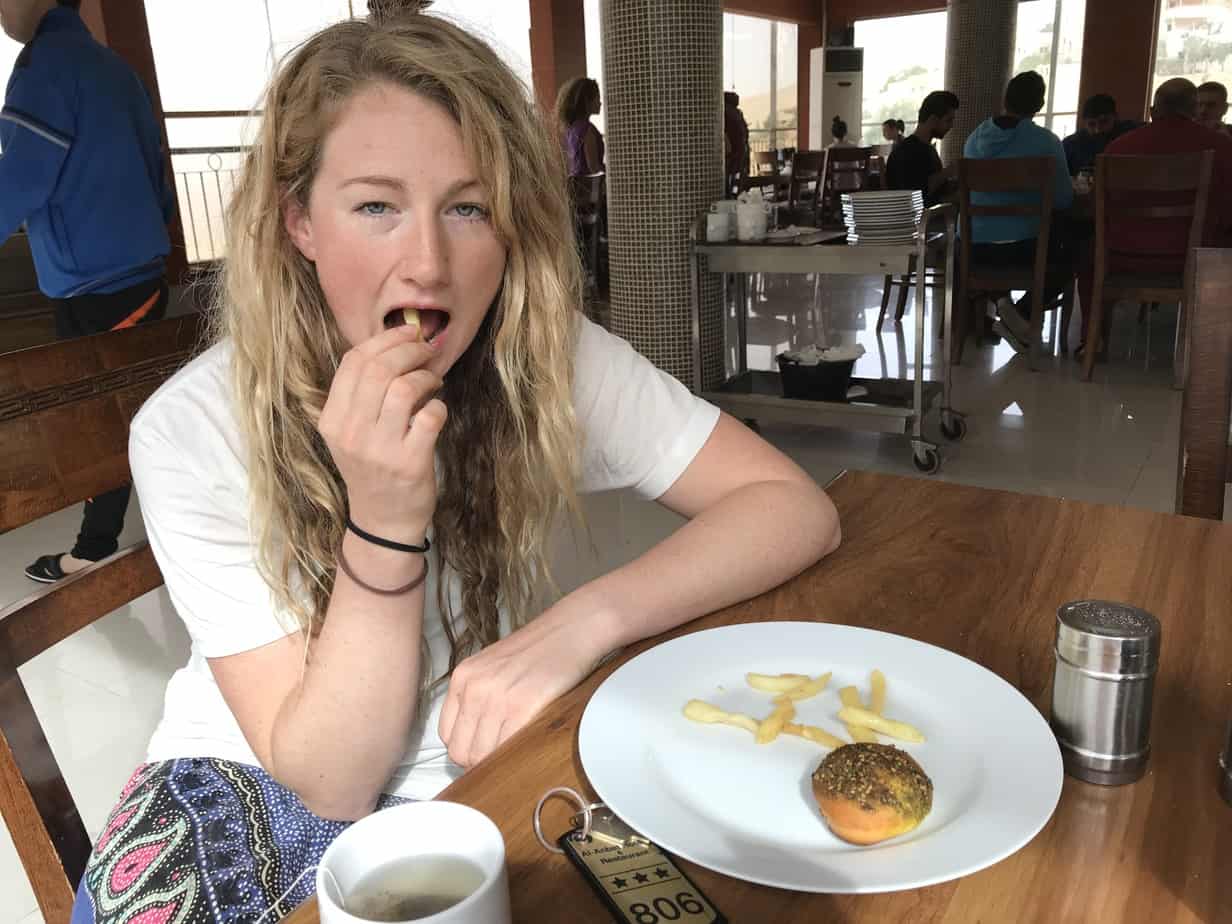 After we went through the plan for the rest of our trip which got me really excited. The hassle with the water drops and being babysat by our Bedouin had been tricky the last few days so I was looking forward to the isolation of the next section. It’s also a tougher section. We will be covering more distances, our water drops will be less reliable and we will be further from civilisation. A real advenutre! 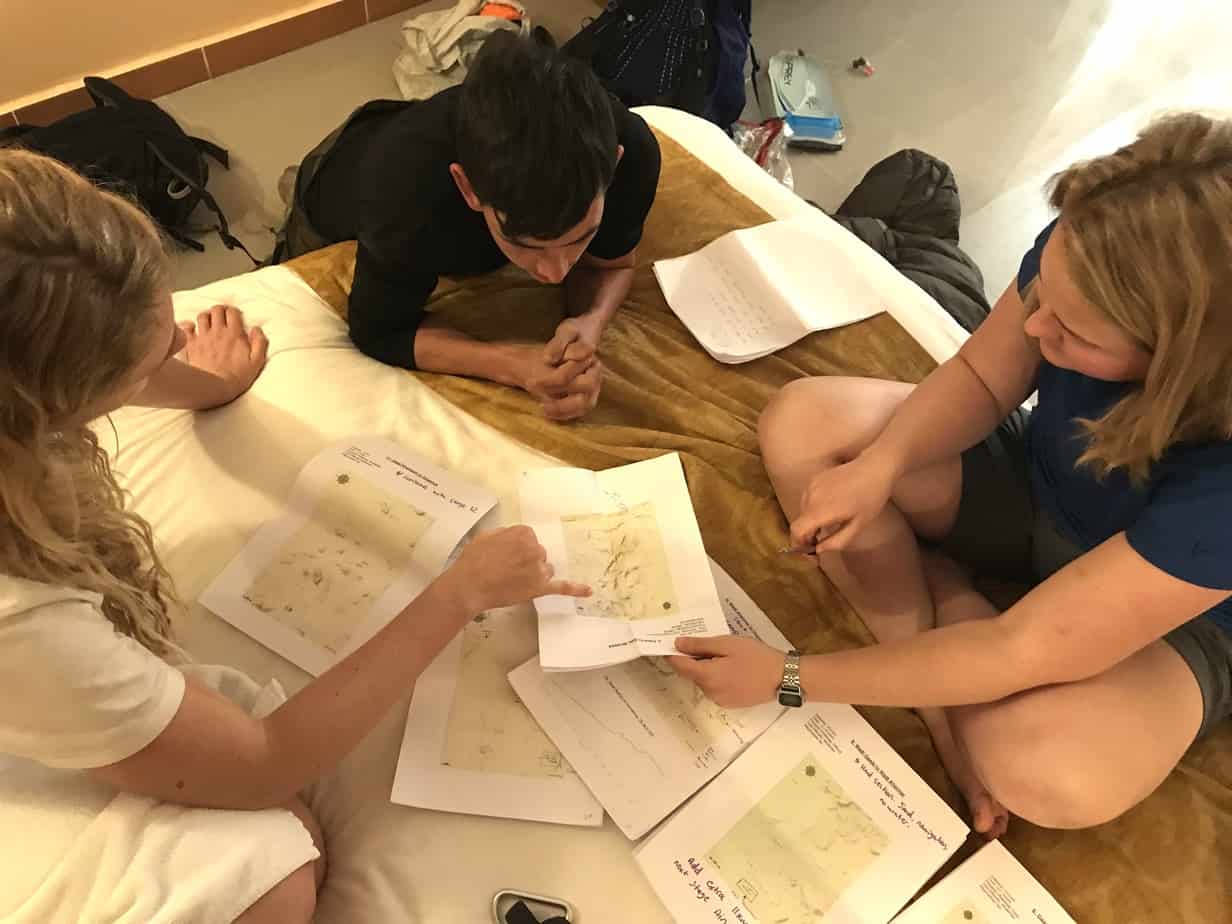 We debated going back into Petra but decided against it. This was a rest day so we should do just that. Instead, we ate, chatted and did some hiker admin – updating our social media, hand washing our clothes and stretching.

I also spent some time reading my book. I really should find more time to read, it’s so relaxing!