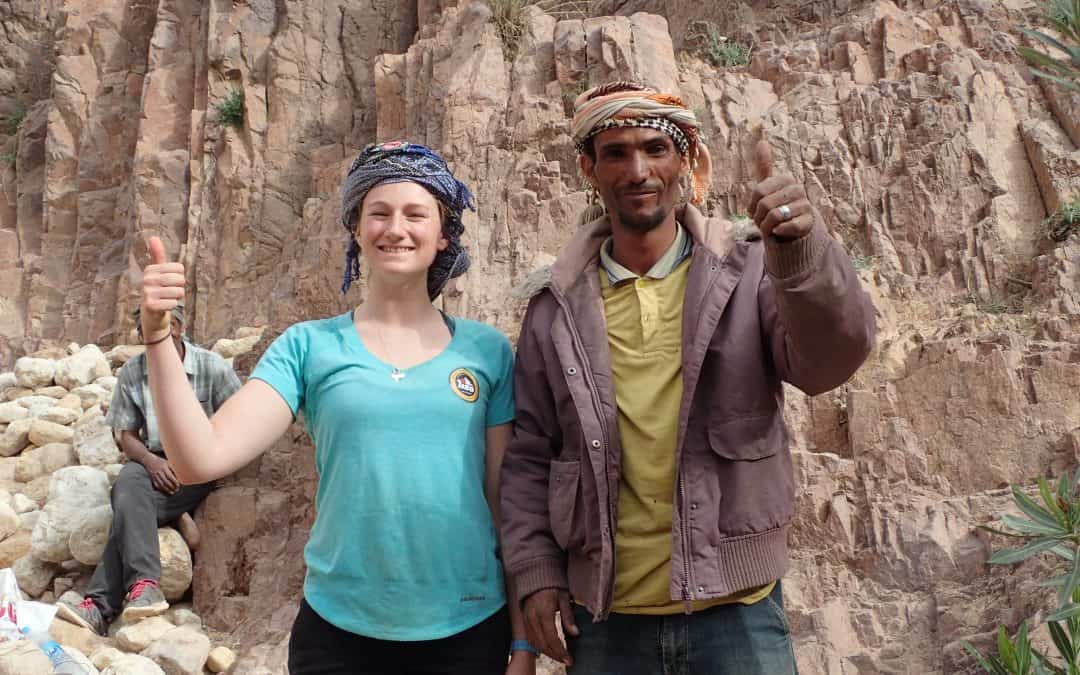 Catch up on my previous daily installments: Travel day and Day 1.

All 3 of us had a terrible nights sleep. It was so unbearably hot. I was drinking loads and then I was needing to pee loads. I also didn’t like that we were sleeping so close to Bedouin villages and near a track, although we didn’t have much choice in camping spots as everywhere around us was too rocky. It wasn’t that I felt unsafe but it’s just weird camping wild in a new country until you’ve become familiar with the people and customs.

Eventually, we crawled out of our tents and packed down, leaving the camp spot at 7am. I could just tell that today was going to be a tough day. 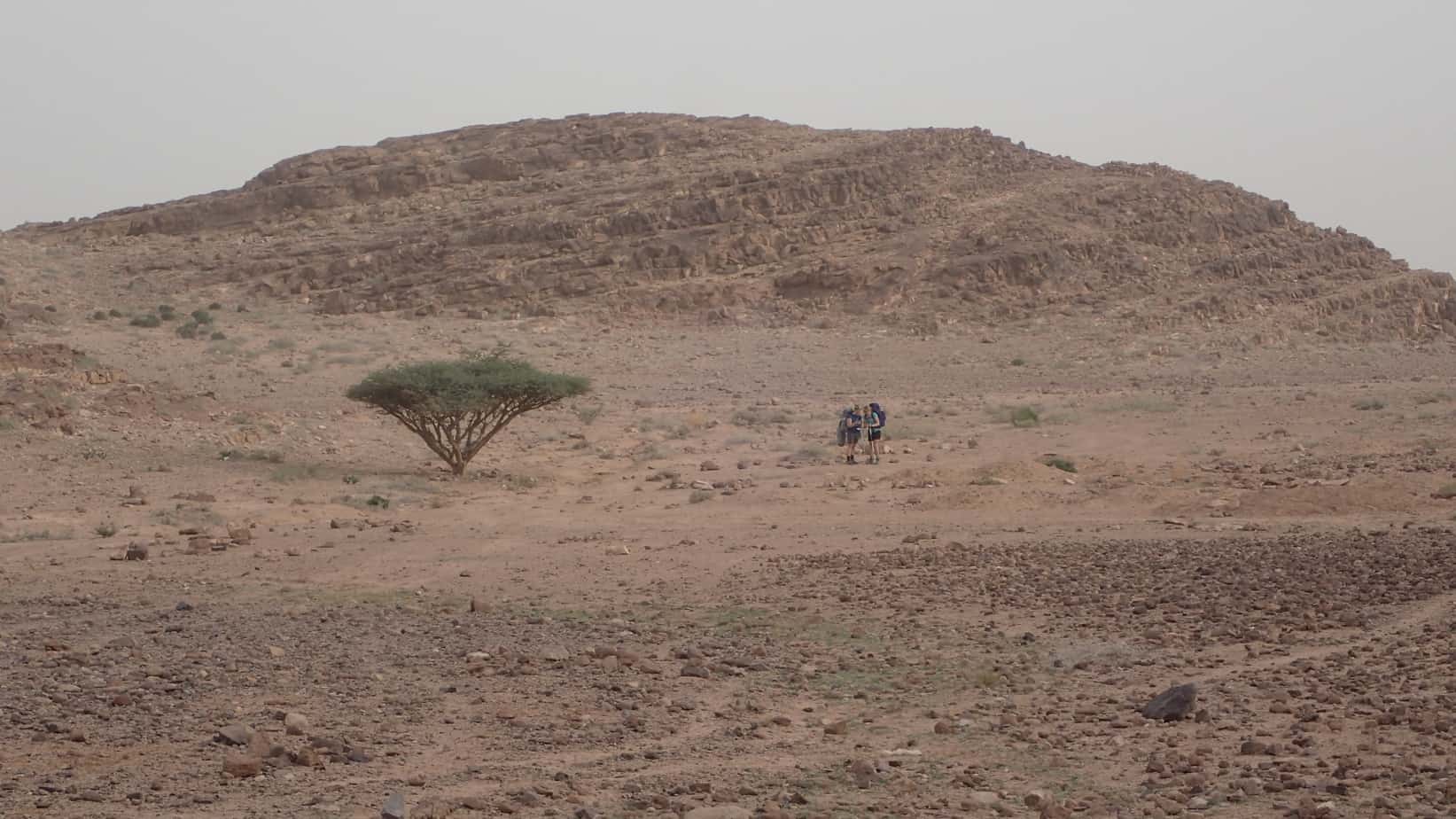 Distance wise we had much less to cover today, only about 16km although with a big climb midway which would slow us down. The first 2 hours were over really uneven rocky terrain that was tough on the feet. Mollie has already been suffering from severe pains in her foot muscles. They are very swollen!

We also kept losing the camel track we were meant to be following as it wasn’t very clear so this slowed us down.

We reached the base of the mountain and started the 500metre climb up. The views were beautiful….only ruined by Mollie’s horrendous music taste which she played on her phone – Britney Spears, Backstreet Boys, Spice Girls. I have no words! 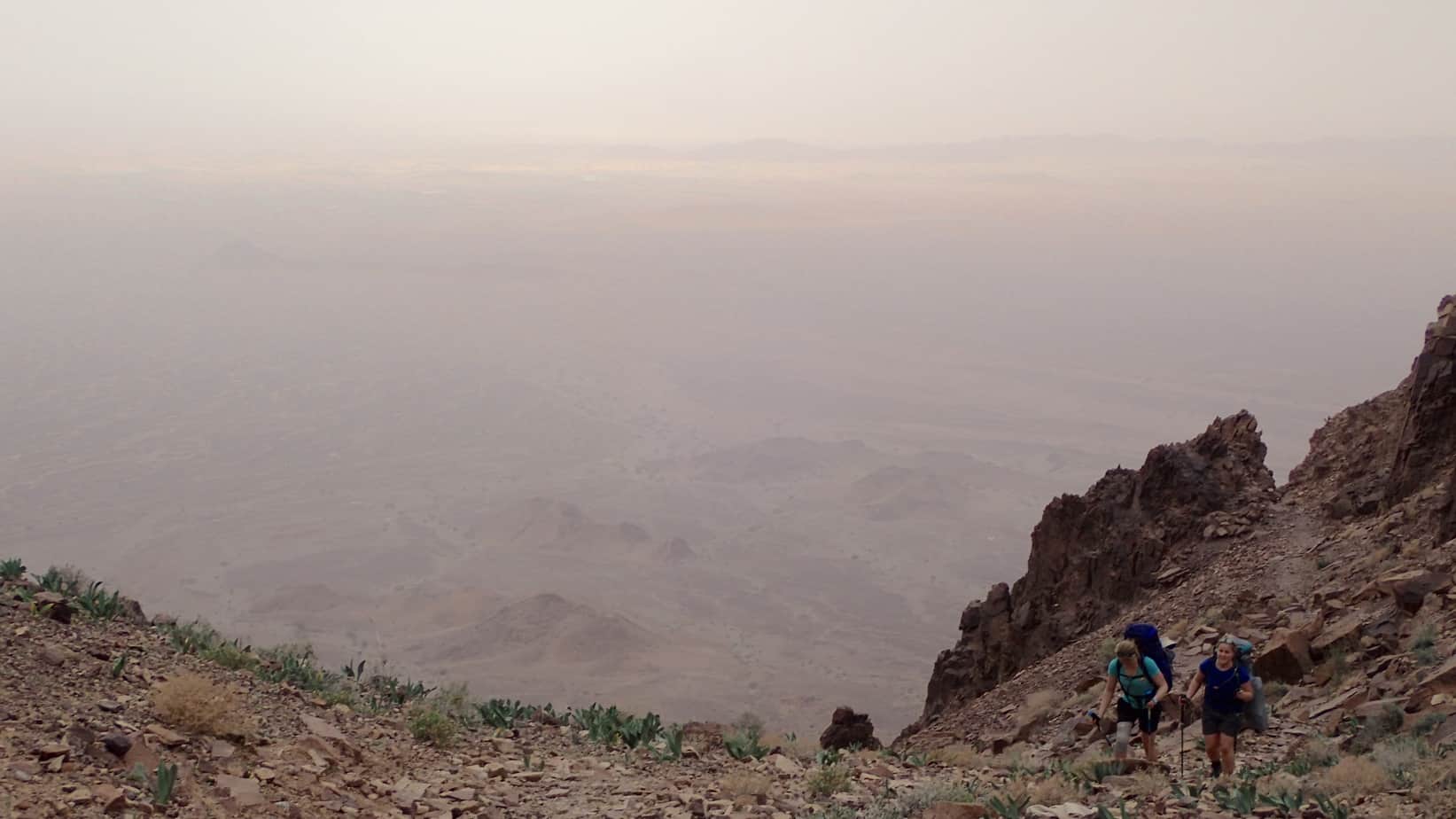 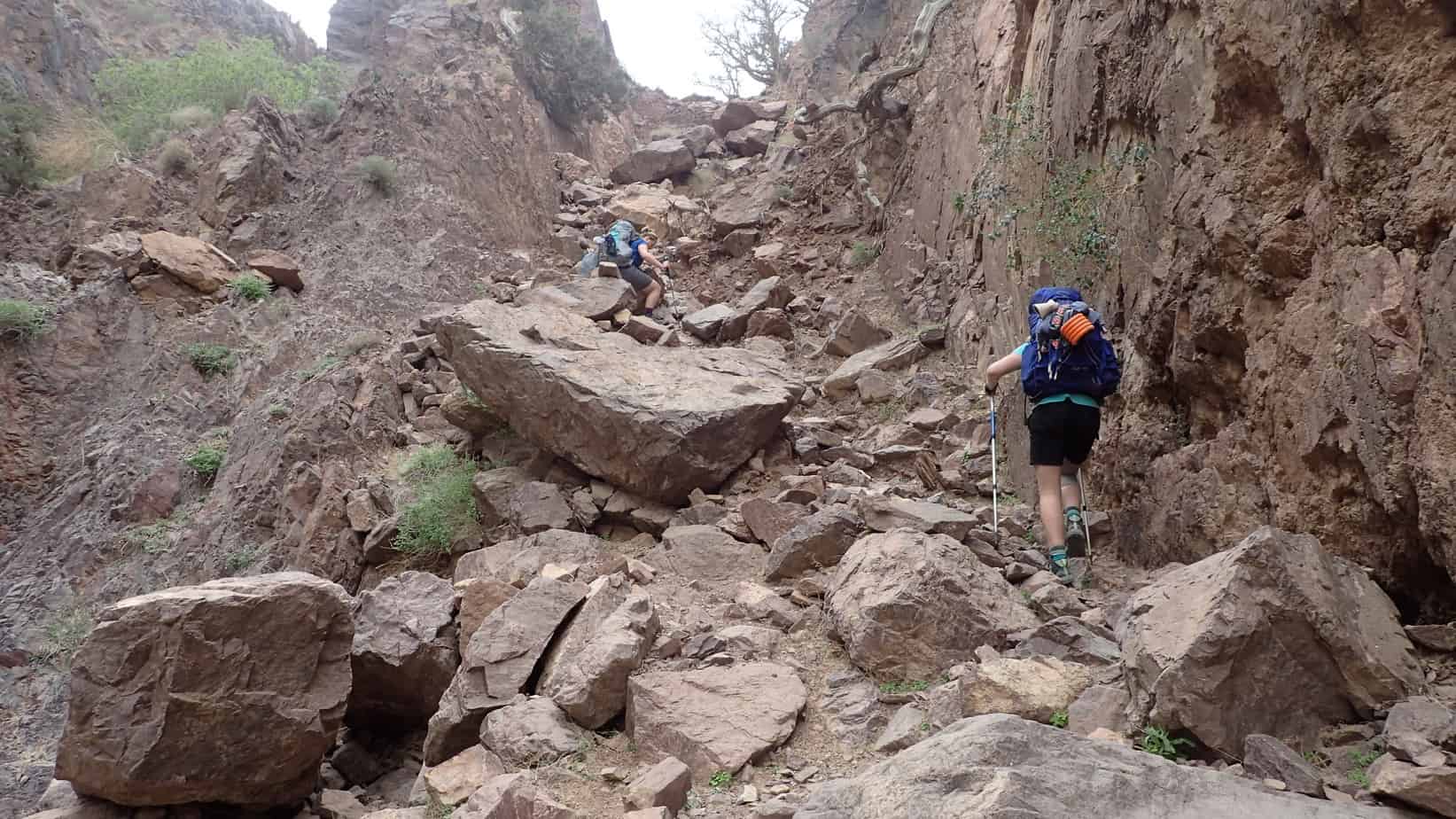 It felt great to reach the top but I found my energy levels plummeted quickly as we started descending into the valley below. I was really tired. I grabbed a sugary snack to try and give myself a boost.

We had arranged to have our water dropped at the base and had made a plan to wild camp nearby so we could clean in the spring and have a shorter day to catch up on sleep. I kept thinking about being able to soak my feet in the cool water and it was great motivation to keep going.

Being babysat by a Bedouin

When we arrived we found Alda, waiting for us…but without water! He was very concerned for our safety and rather than just dropping water (which is what we had asked) he insisted on meeting us yet again and guiding us to another camp area. He’d brought a mule and wanted to put us/our bags on it.

No chance…I’m carrying my bag every step of the way!

It seemed to baffle him greatly that we would choose to walk and carry bags when there was a mule there. Hiking for pleasure or a challenge is definitely not a concept here.

Alda (on the right) also brought a friend along (on the left). I couldn’t stop staring at him because he looked so much like George Clooney!!! I nicknamed him ‘Bedouin Clooney’ 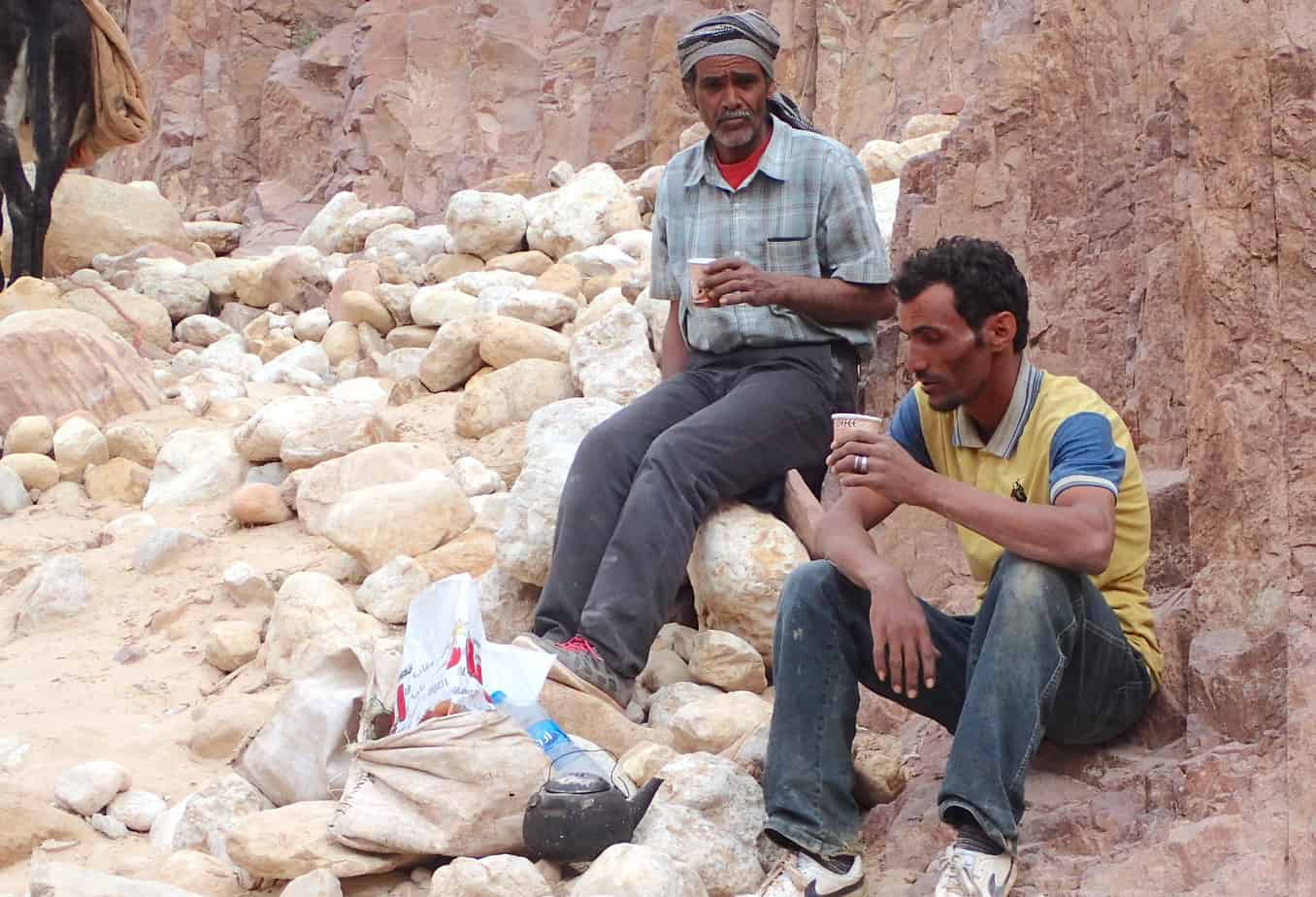 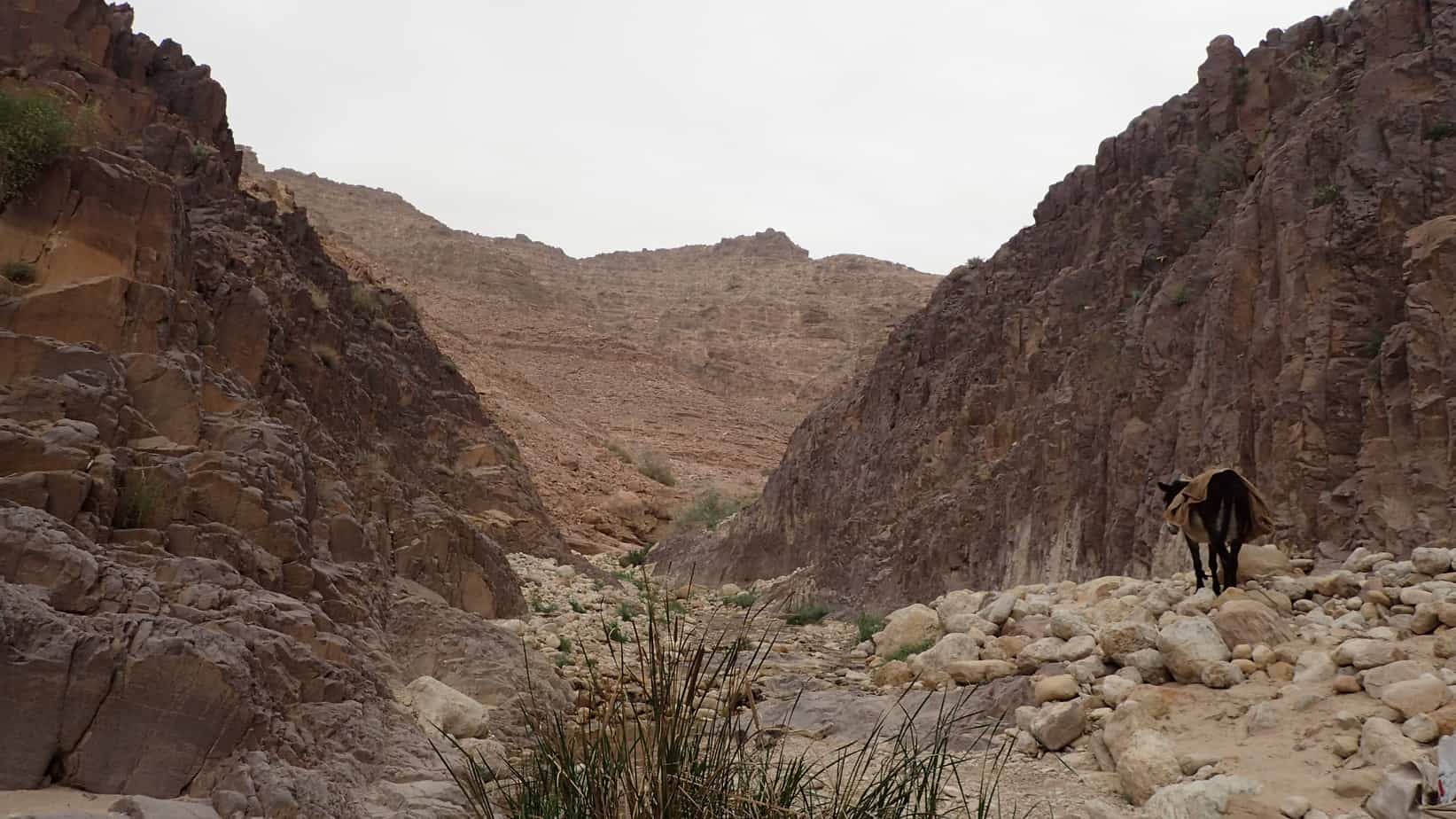 A change of plan

Alda doesn’t speak much English but we tried to explain that we wanted to camp here and could he bring the water to us. We thought he understood and wanted to show us a flat spot where we could stay but instead, we ended up being lead out of the Wadi for an hour and a half to a camp spot that he thought was safe (probably so he can keep an eye on us!).

I kept trying to try communicate our plans in different ways but he just wasn’t understanding so we had no choice but to follow him.

Now we were REALLY tired. And I was also gutted that I now couldn’t soak my feet in the spring which I had been looking forward to all day. It put me in a bad mood. It’s such a simple thing but when you’ve been hiking for 9 hours and focusing on small enjoyments at the end, a small change can really knock you. 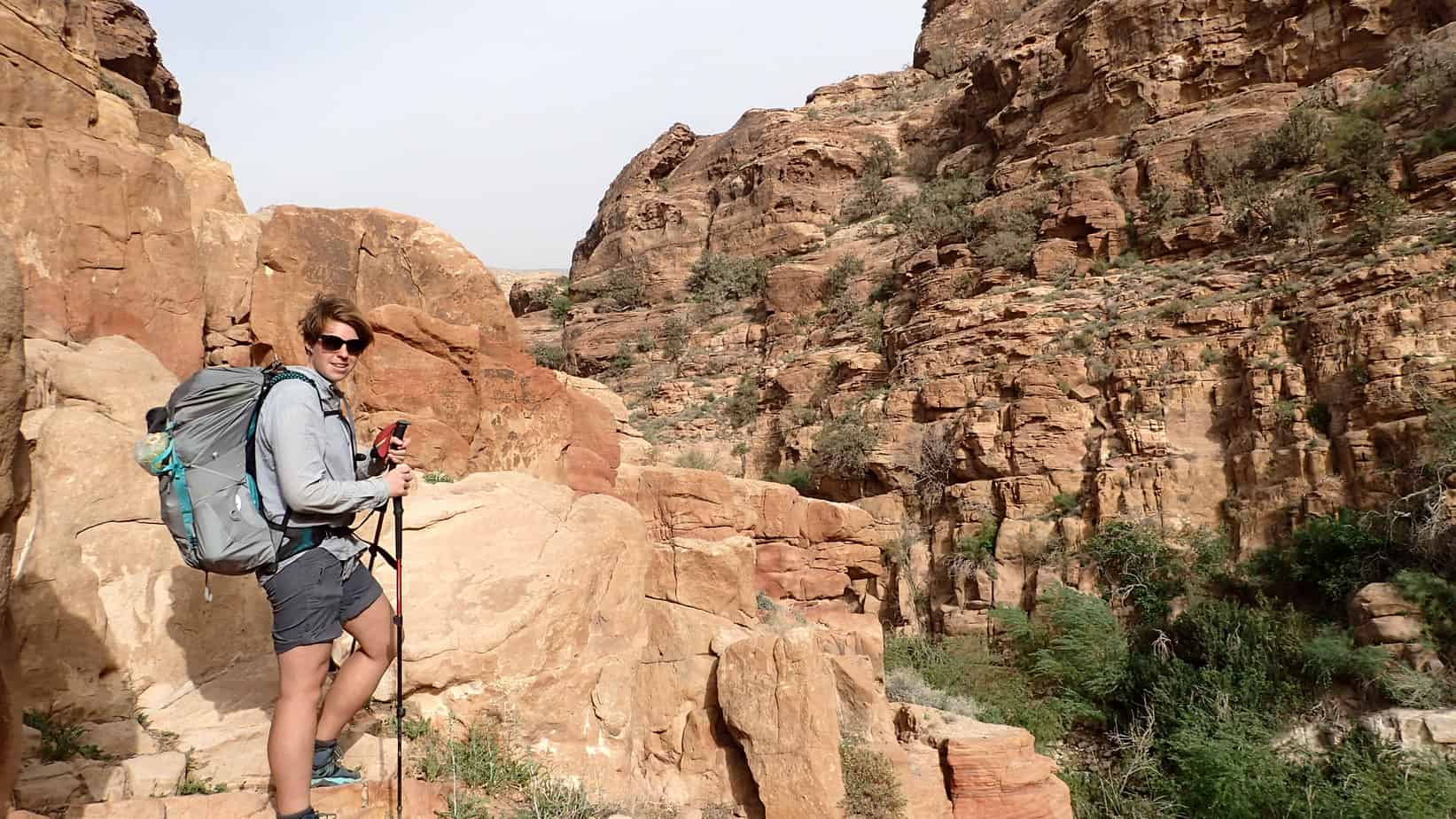 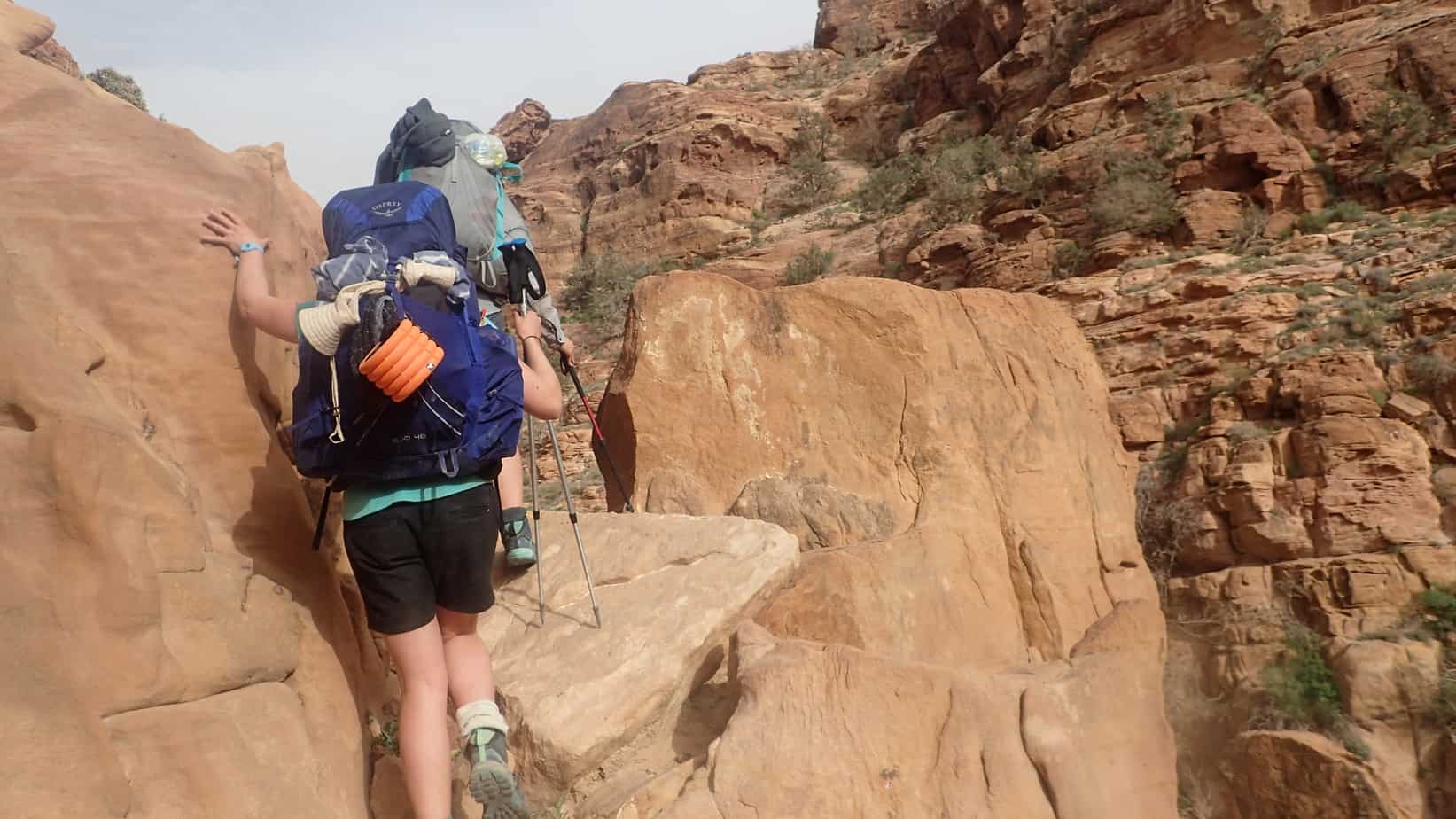 He and his friend then insisted they cook us traditional Bedouin food although really we just wanted to be left alone to get changed and eat our expedition food. Especially as I had really bad heat rash all over my legs, back and belly and just wanted to get semi-naked!! It hurt a lot! 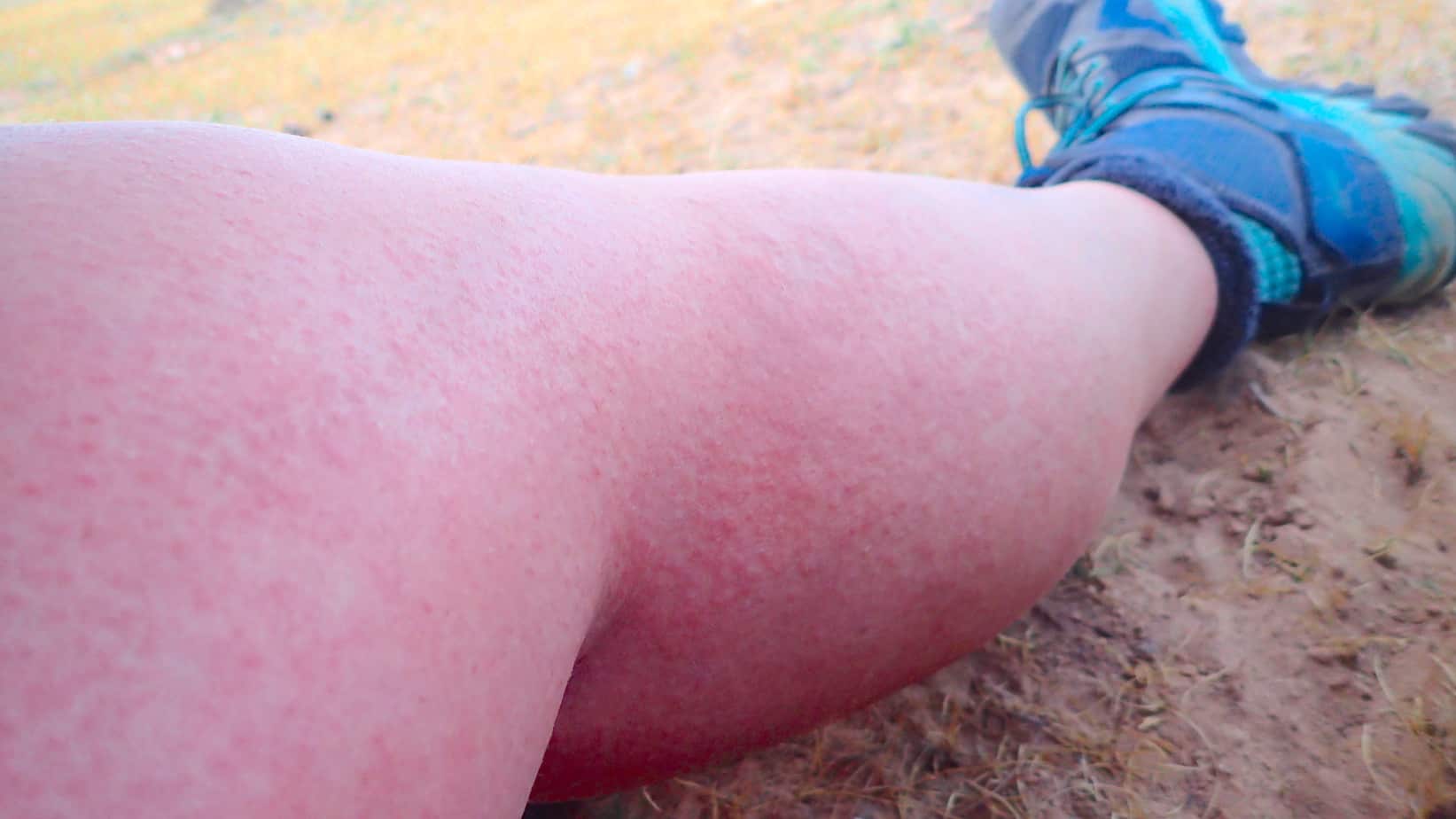 The bedouins are so, so lovely and friendly so it’s hard to say no to their hospitality. But it’s also really frustrating. I like being independent and self-contained when on adventures. It means that we can hike our own hike – make the distances and camp choices work for us. They have such little faith in us. 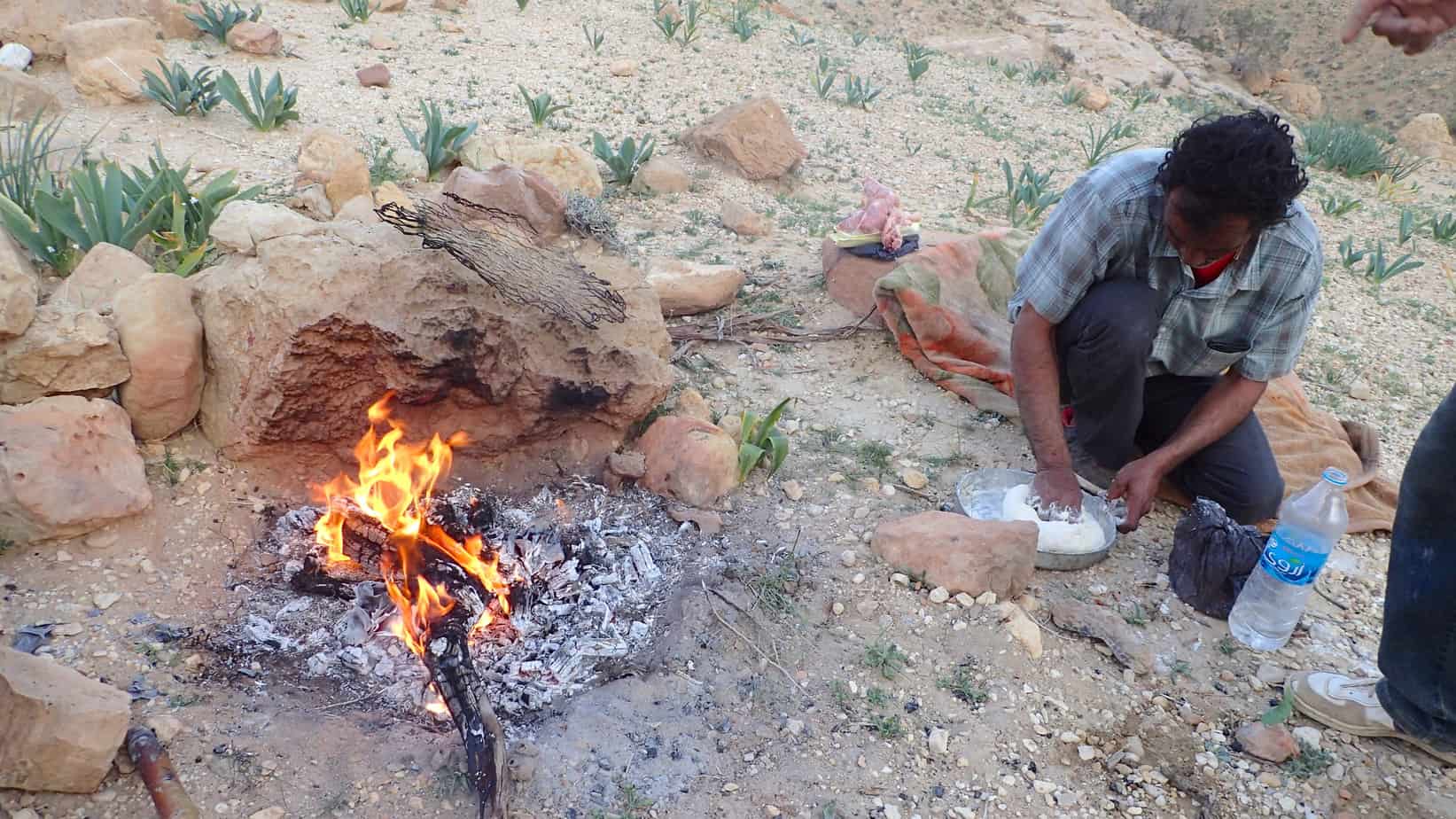 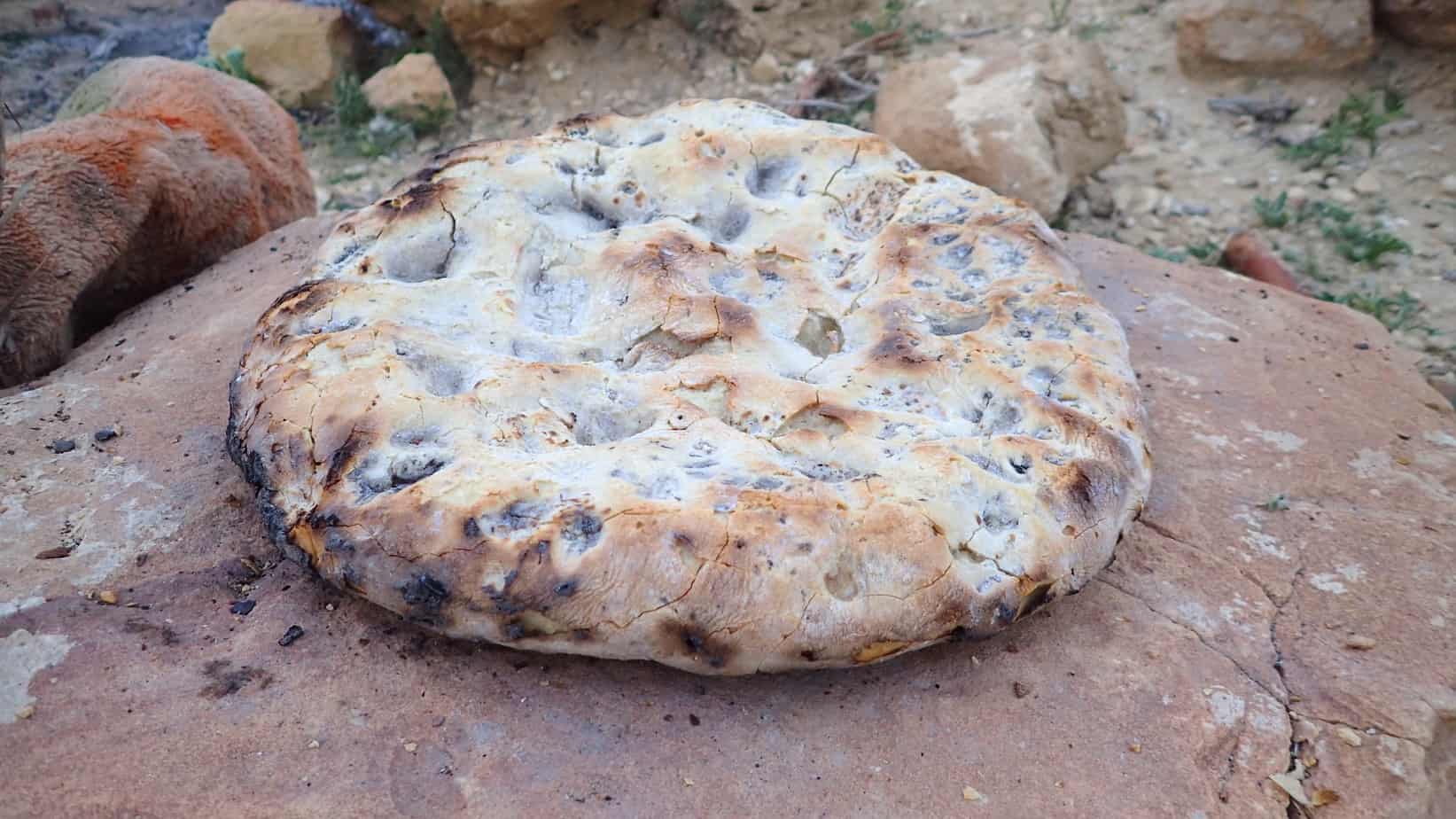 It was a great evening. Our camp spot and views were epic. The Bedouin bread they made in the fire was incredible and we took it in turns to sing songs. So it worked out nicely. I really hope though that after Petra, when the trail gets more remote and we’ve proven to our water guys that we are capable, that we won’t be babysat quite so much though. 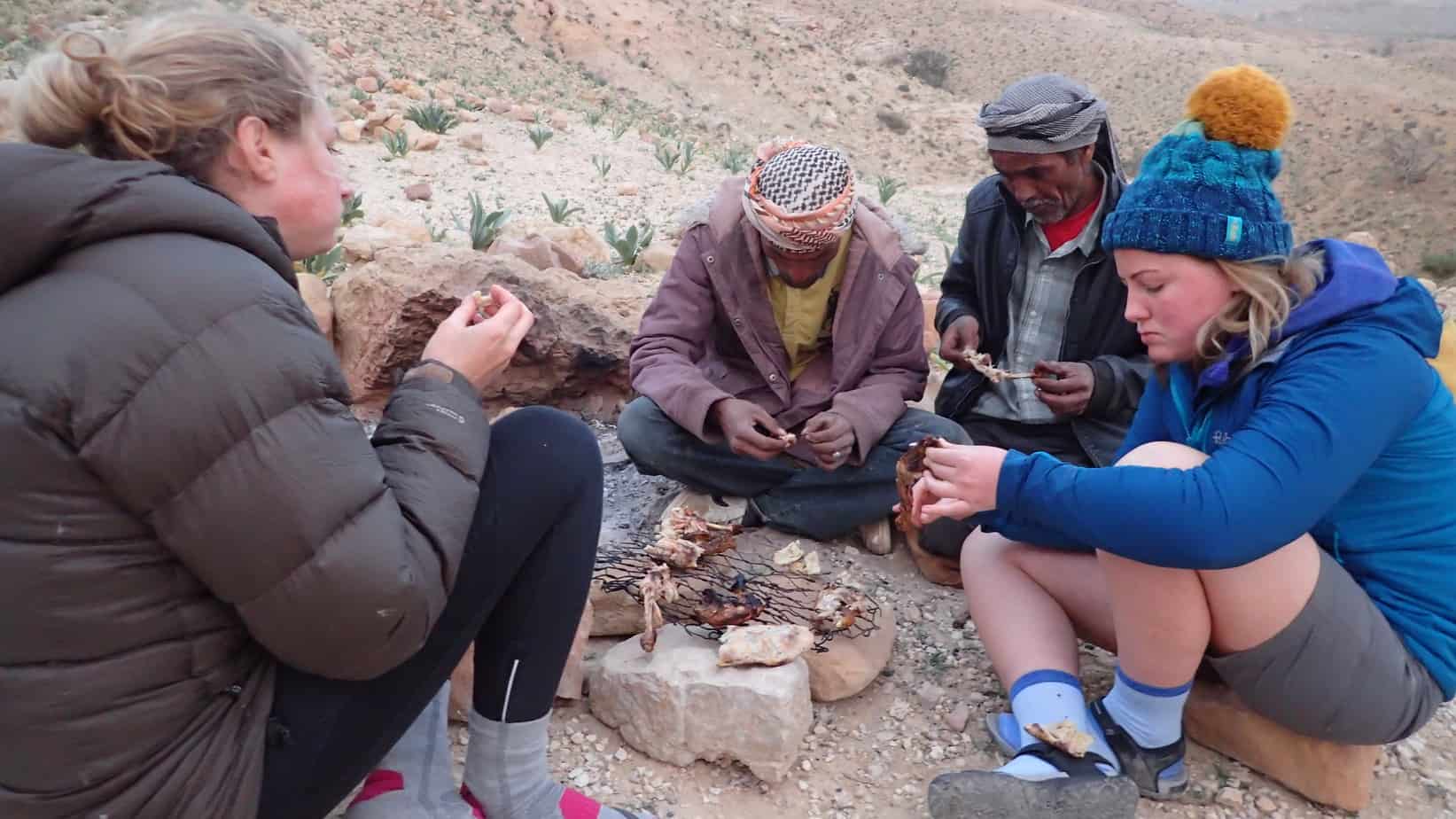 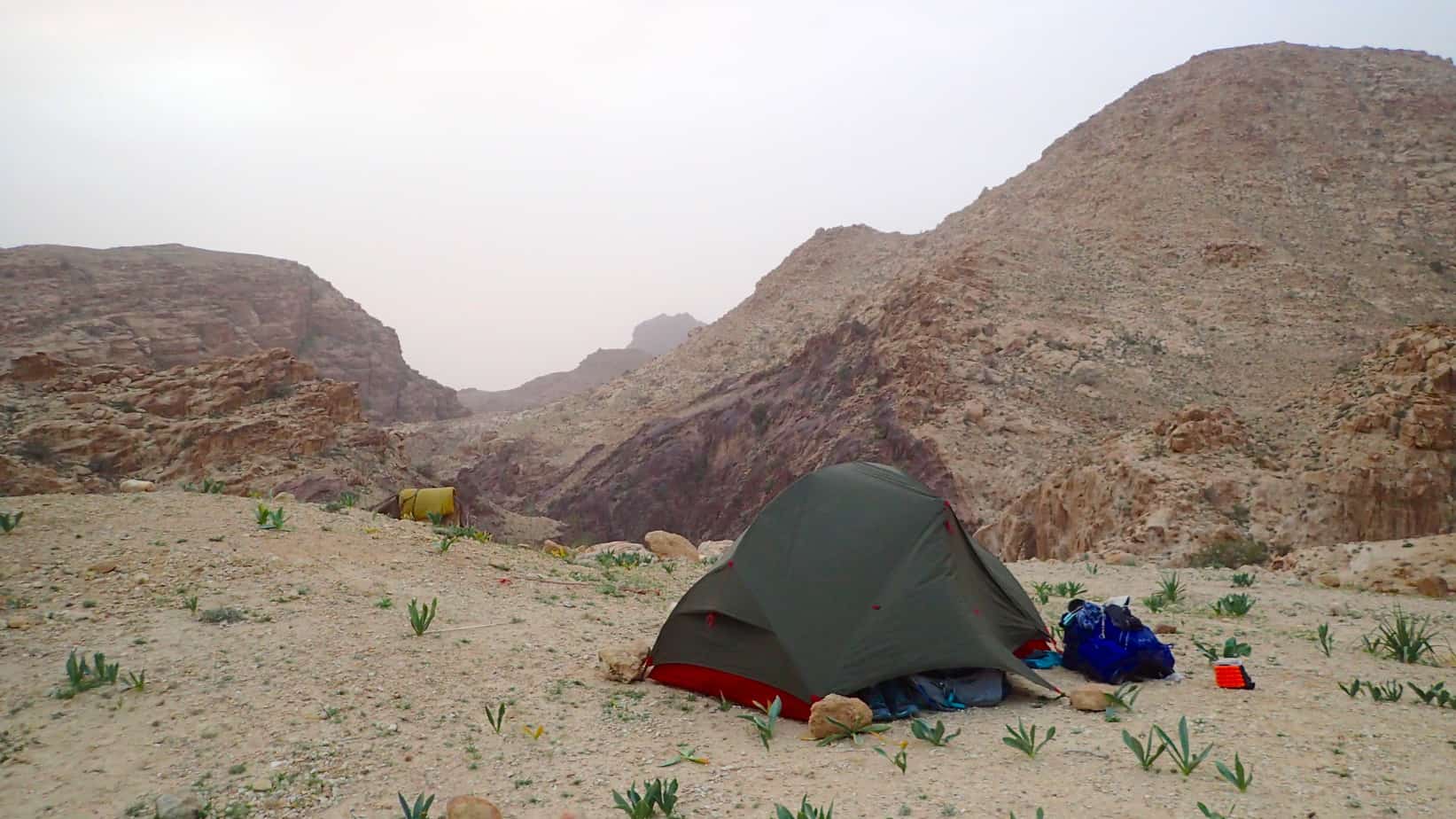 Read my instalment for day 3 of the expedition here.