Scoot the Loop – Death by calazone 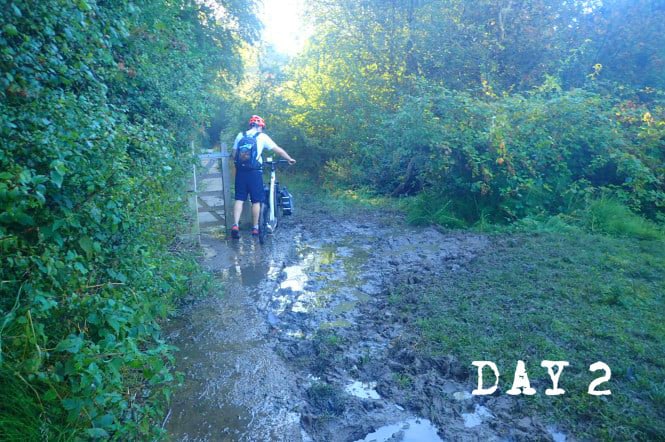 After our pub dinner last night we pushed our scooters up a steep half mile hill then turned off the path into a field. This was undoubtedly the most beautiful section of the London Loop yet with large open green fields, woodlands and horses to keep us company. But the trail was treturous.

Bumpy and uneven with endless stiles to get our scooters over (not an easy feat with the panniers on) but the worst had to be pushing our way through the overgrown nettles – ouch! I couldn’t remember what a doc leaf looked like so I tried a few different options. None worked. 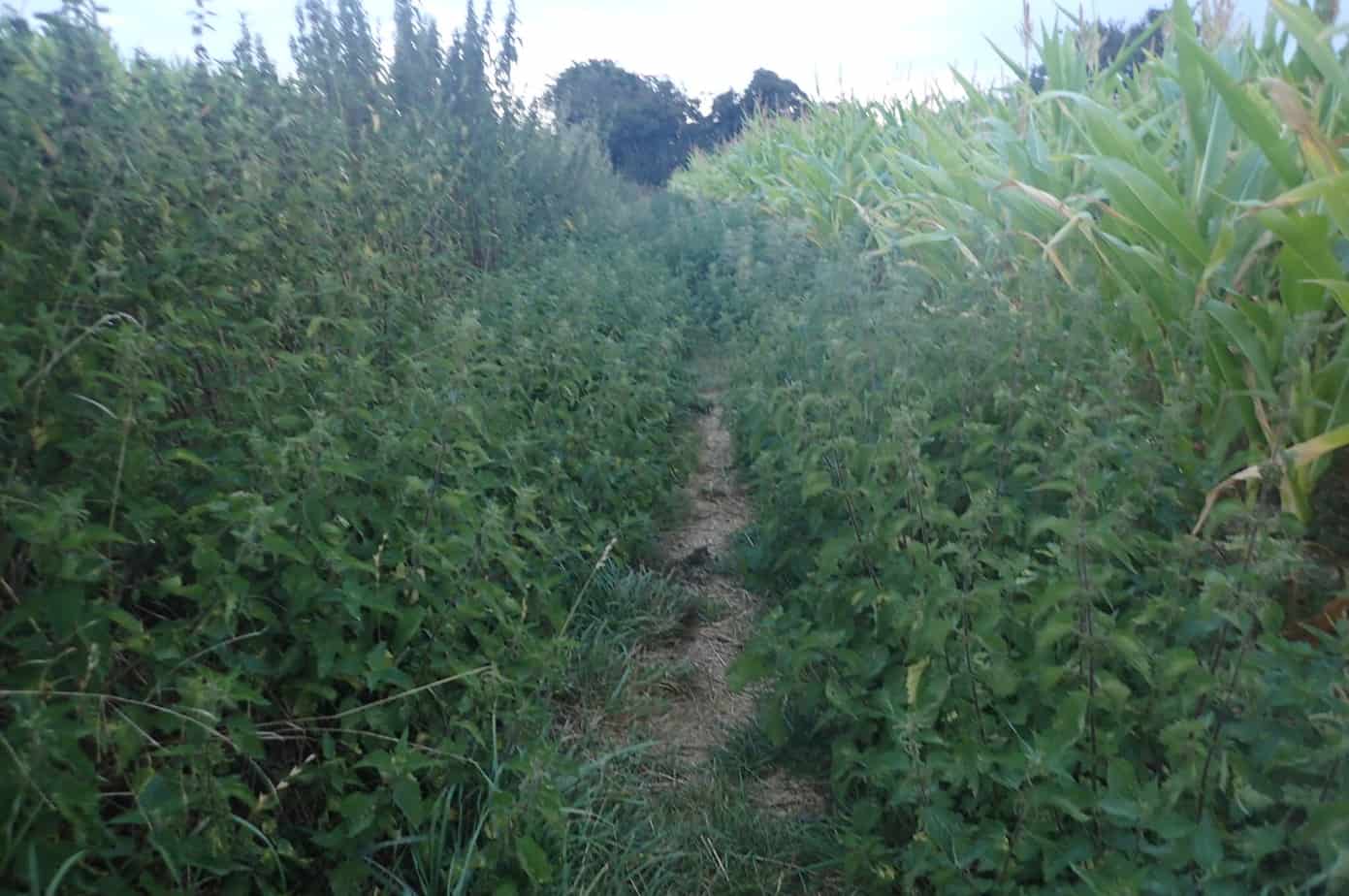 It took almost an hour and a half to cover 2 miles and we were losing light fast. We rigged up our lights and made a plan to follow the track into the next ‘green’ section where we would wild camp. Except, for the hundredth time, we missed the turning…it really must have been very tiny and/or overgrown! 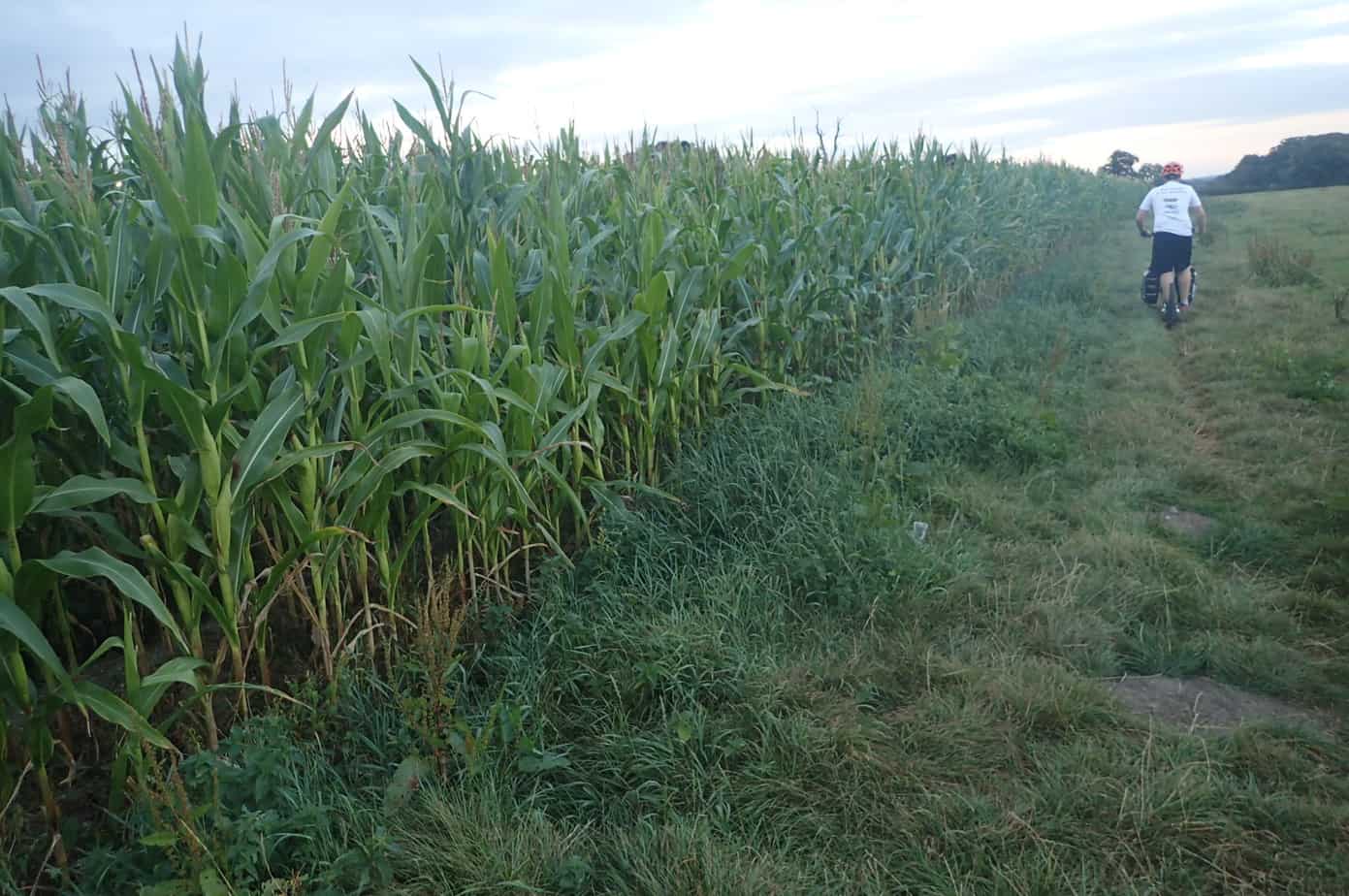 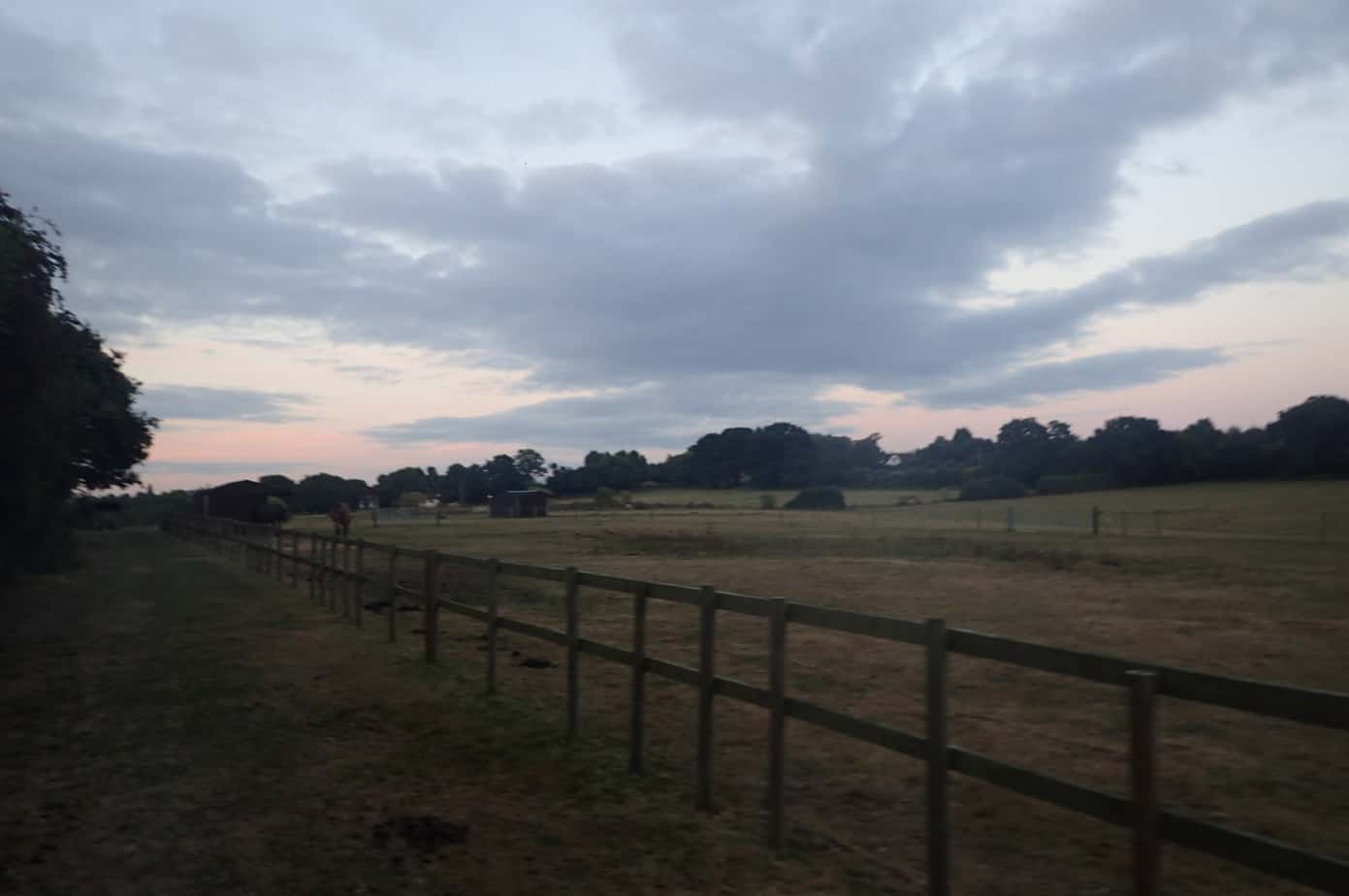 We realised our mistake much too late and had no choice but to carry on along the road we were on and to pick up the path at Moor Park – there were a few green spaces marked on the map which could be potential camping spots. Finding the trail was impossible at night and so we ended up meandering down residential streets in the general direction. It was actually quite nice – empty, mostly downhill and with a gentle breeze. All the green spaces though turned out to be golf courses or unmarked military areas so we had to push on all the way to Hayes.

By this point it was 10pm, we were spent and we had run out of water. I was looking for a house to knock on to ask for water and to sleep in their garden but everywhere looked dead to the world – this was a proper millionaires area so they were most likely all in their basement pools or rooftop jacuzzis!

Along the way we almost scooted into a man on a horse with the squeakiest voice ever who declared ‘Well aren’t those the niftiest little things, you 2 must be as fit as fiddles’. It turned out he had just gone to the pub on his horse, as you do. A police car also pulled over and a cop yelled to us ‘what the hell are they?’ Before wishing us good luck after we had explained what we were doing.

I also almost face slammed the road. I accidentally squeezed the brake too hard and instinctively gripped even harder. The front wheel stopped but my body didn’t. Amazingly I managed to steady myself although it shook me up a bit.

This was all proving really hard but we both stayed positive joking with ourselves how this is much better than sitting on a beach, eating good food, in front of the telly or having really warm bubbly baths (mmmm)…….ah, type 2 fun. Something only adventurers understand!

Eventually we found water in a corner shop and at last rugby pitch where we rolled out our bicycle bags and sleeping bags under the posts. It took me all of about 30seconds to fall asleep. 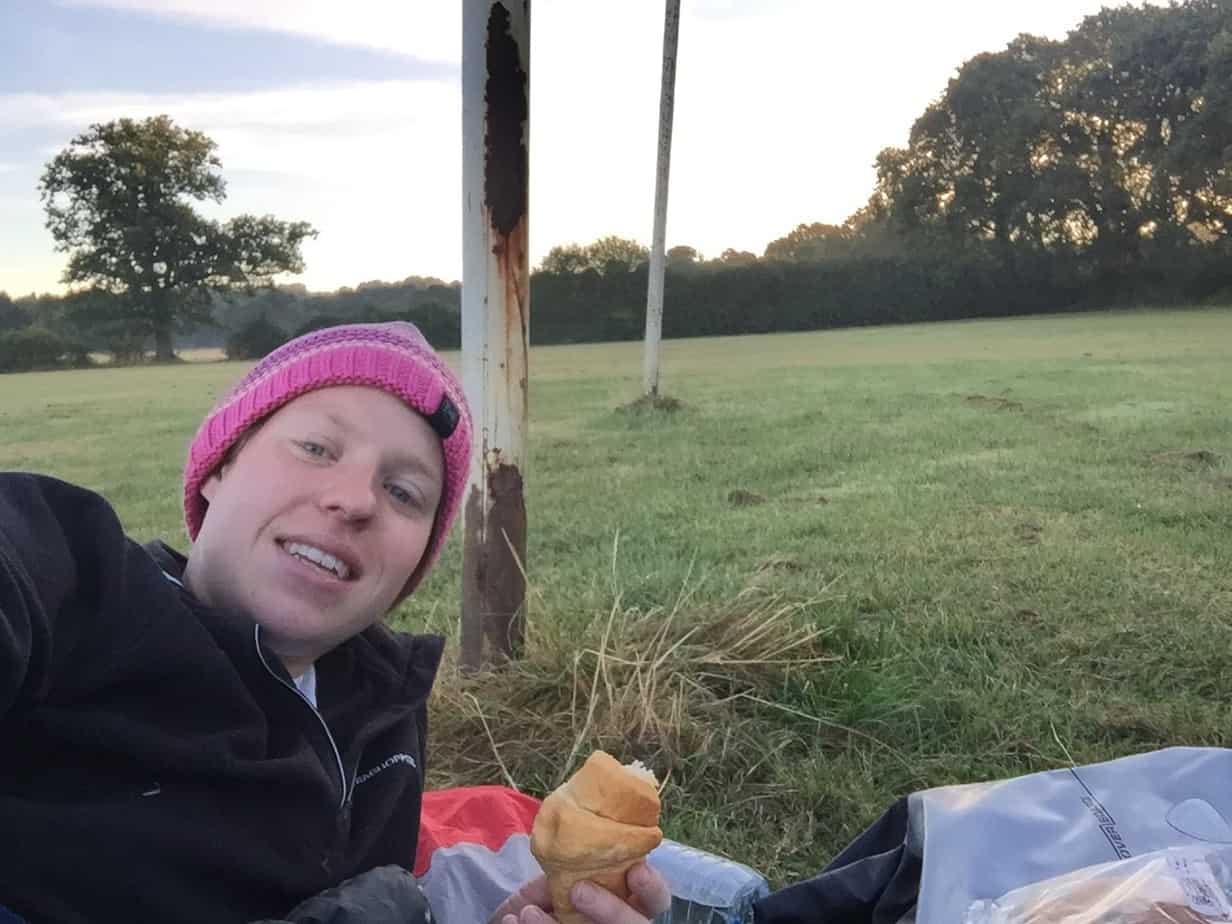 This morning we got up at 6am. Gil did most of the packing while I complained about how cold, tired and sore I am. My legs ache, my hands hurt from the grips and my back is painful from sleeping awkwardly. I’m allowed at least 15mins of grumbling a day and I took it early!

We continued on the trail slowly and in silence but soon defrosted and managed to hammer out 20 miles in no time, helped massively by the huge downhill sections and the decision we made to take an adjacent path over another off road stinging nettle track. As we were coming into Cockfosters (the end of the line!) Gil noticed he had a flat tyre and the last mile and a half we had to push the scooters back into civilisation. 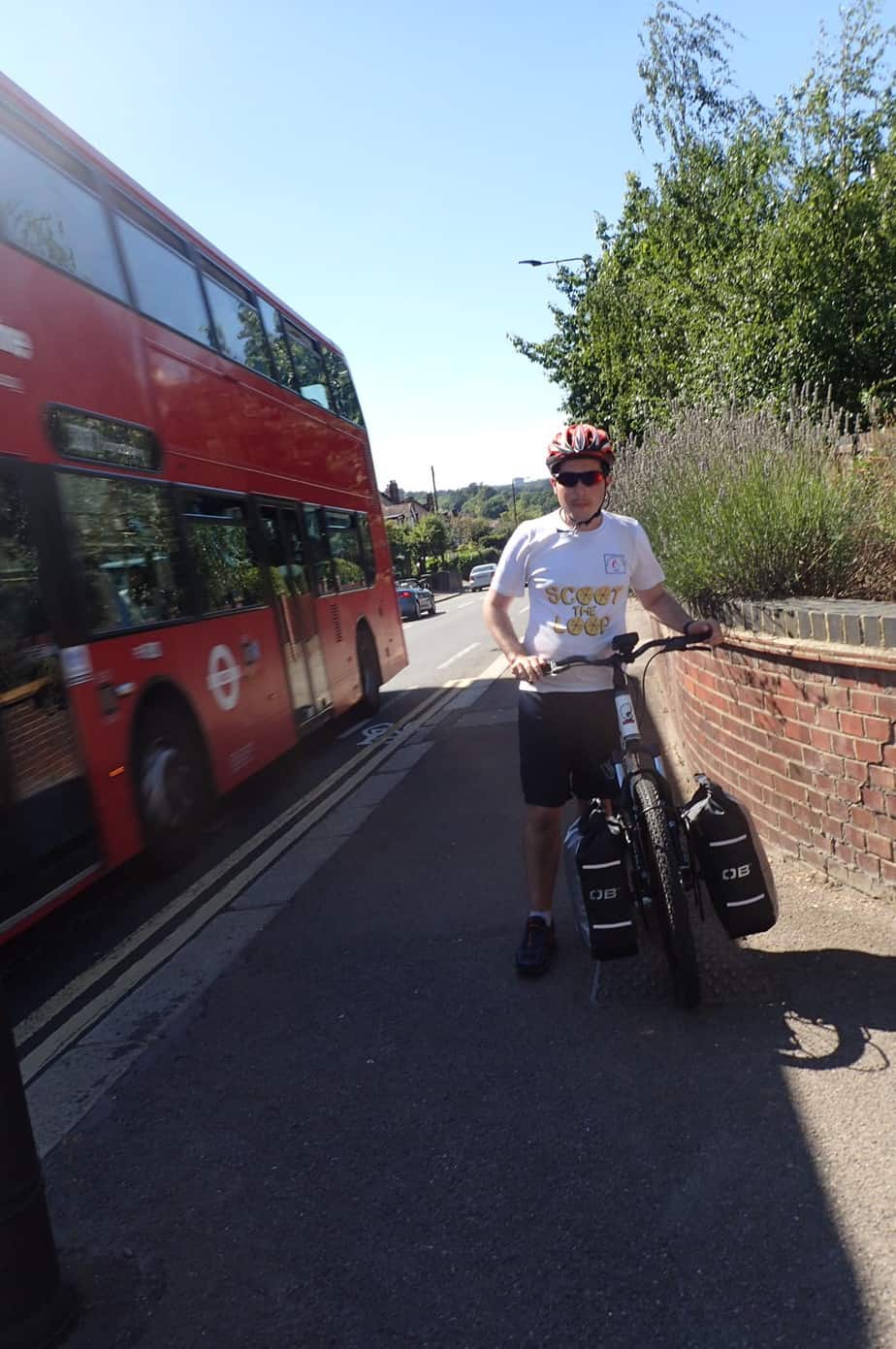 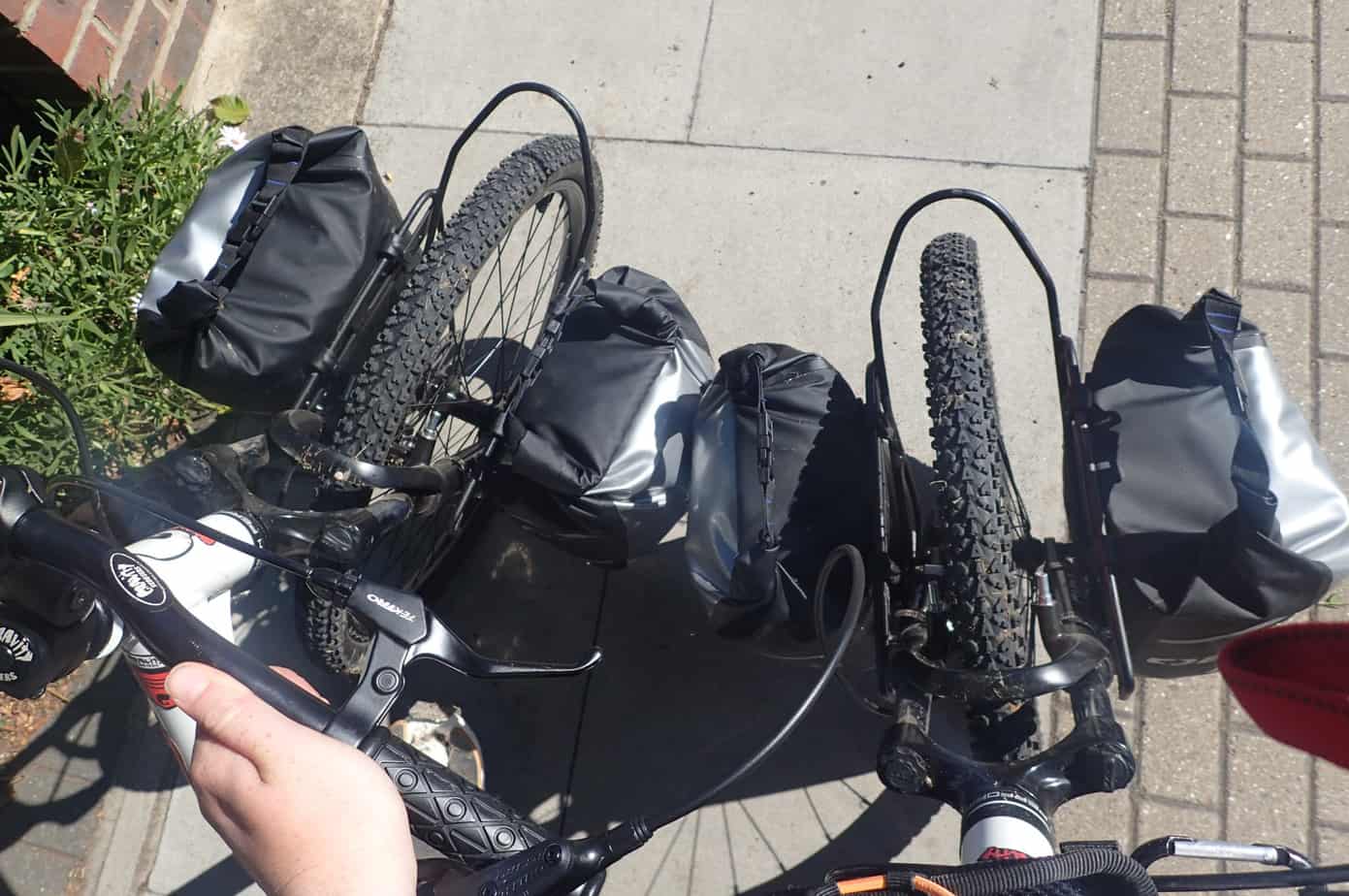 We found a seat in Costa Coffee where we could charge our phones and connect to the Internet to try and sort a solution. It turns out there is such a thing as a mobile bicycle repair man AND that he was on a job down the road from us – good ol’ Gil for finding that one. Paul from Bikes ‘R’ Us fixed up Buzz the scooter and even threw a donation our way – Legend! 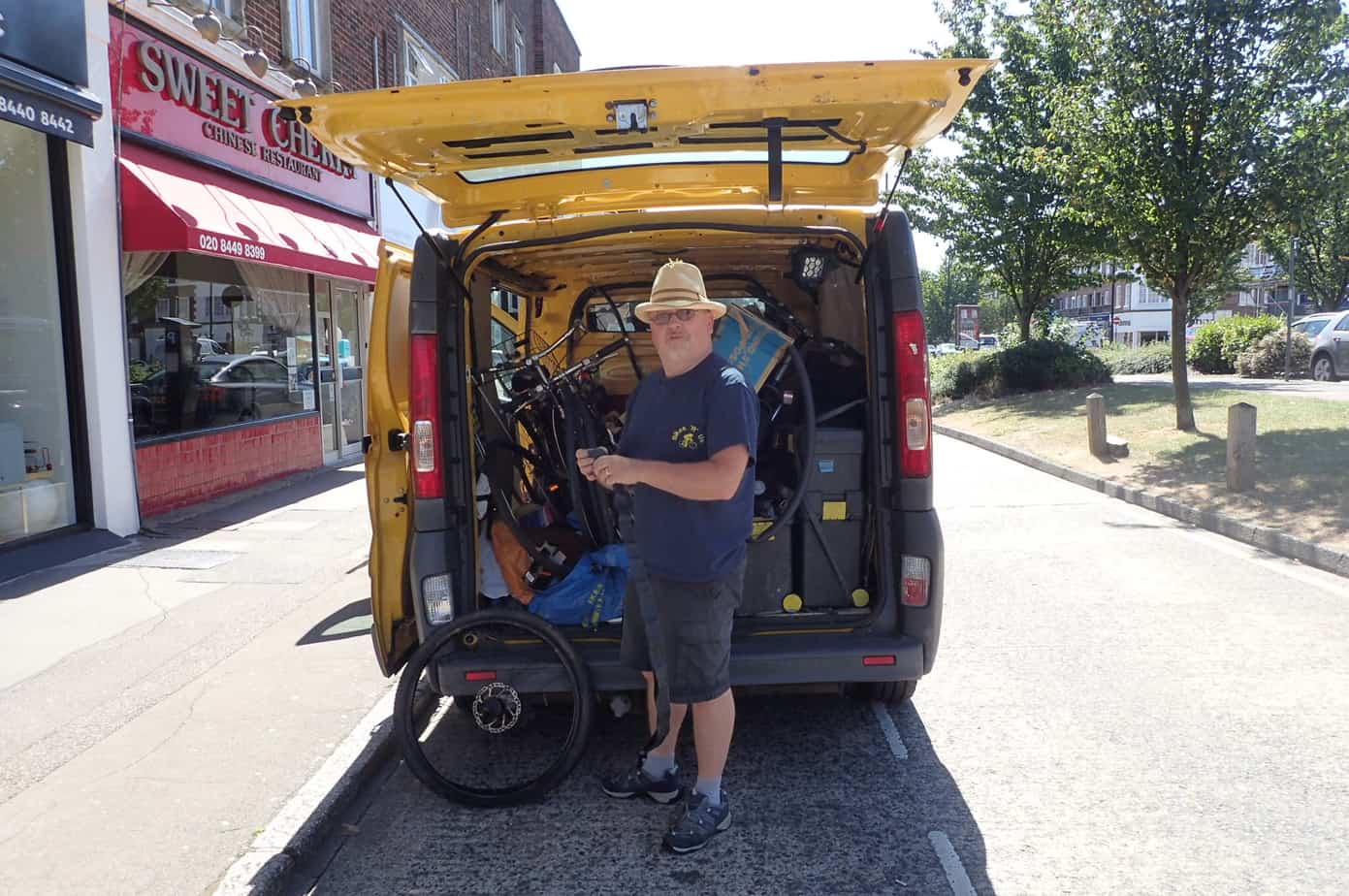 Next stop was the generous Al Fresco who literally fed us within an inch of our lives. My Calazone was the largest portions I have ever seen. On top of that they even threw a chocolate fondant our way. 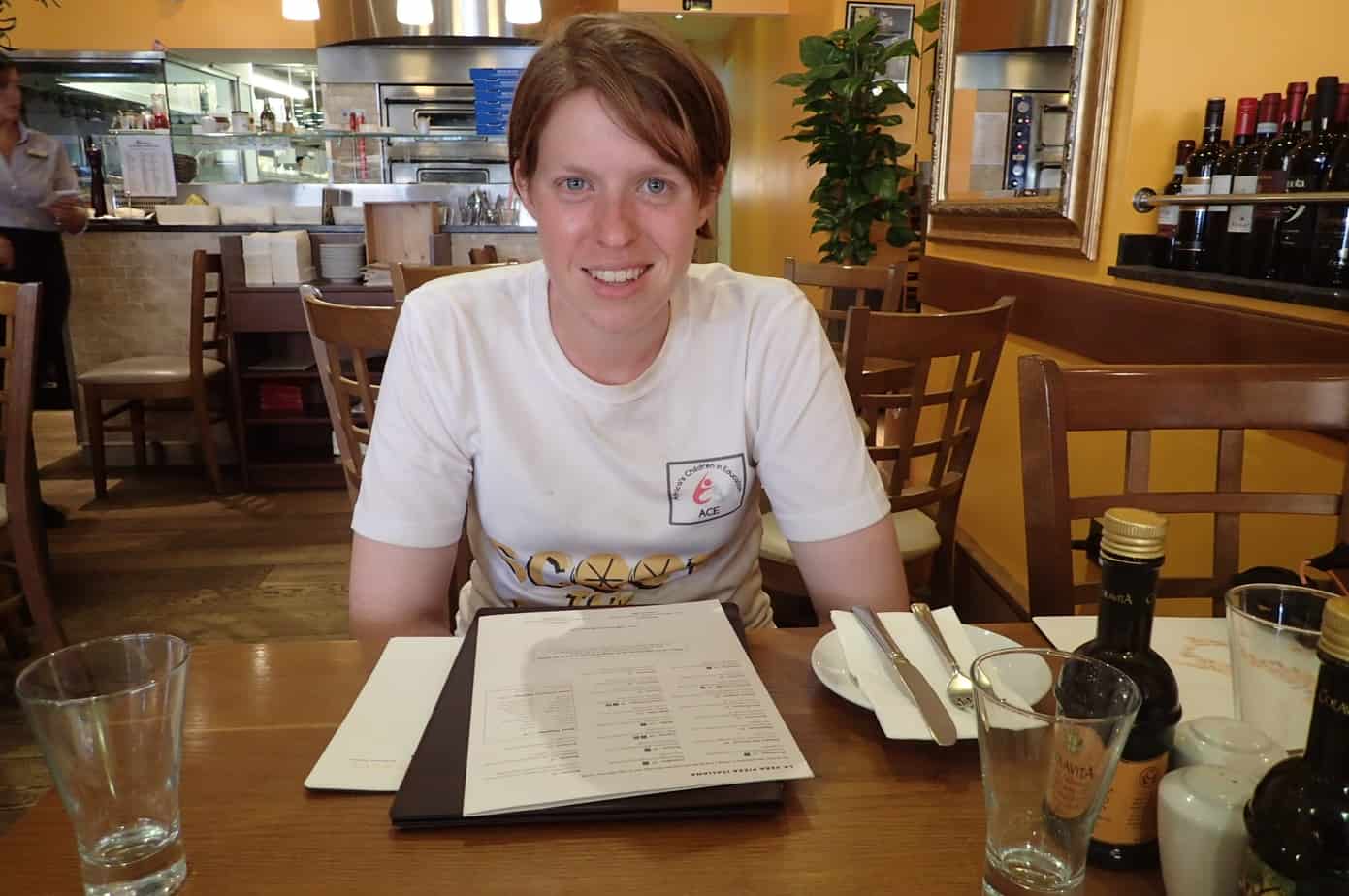 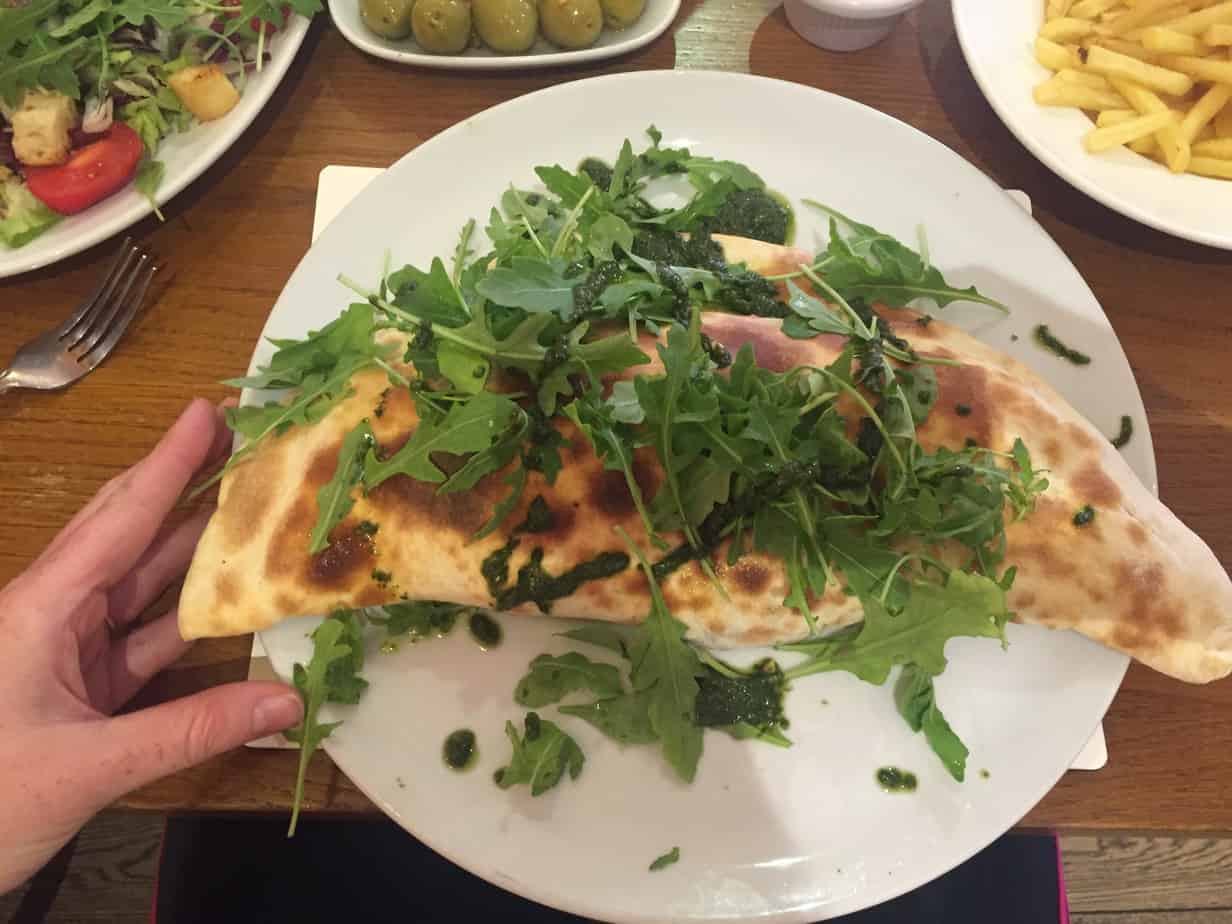 The afternoon can be summarised in one word – HOT! The flat tyre set us back by a lot so to make up time we made a call to head off the London Loop and follow Gils GPS phone and take a direct route to Chigwell, on the roadside paths. I was literally melting in the sun. We’ve finally made it to Chigwell (my first impression is not great – sat in the pub I overheard about 10 people gang up on a poor waitress who wasn’t tidying up quick enough) where we’re planning a well deserved 2 hour rest before trying to squeeze out 3 more miles before bed. I really hope  we can find a spot earlier tonight. 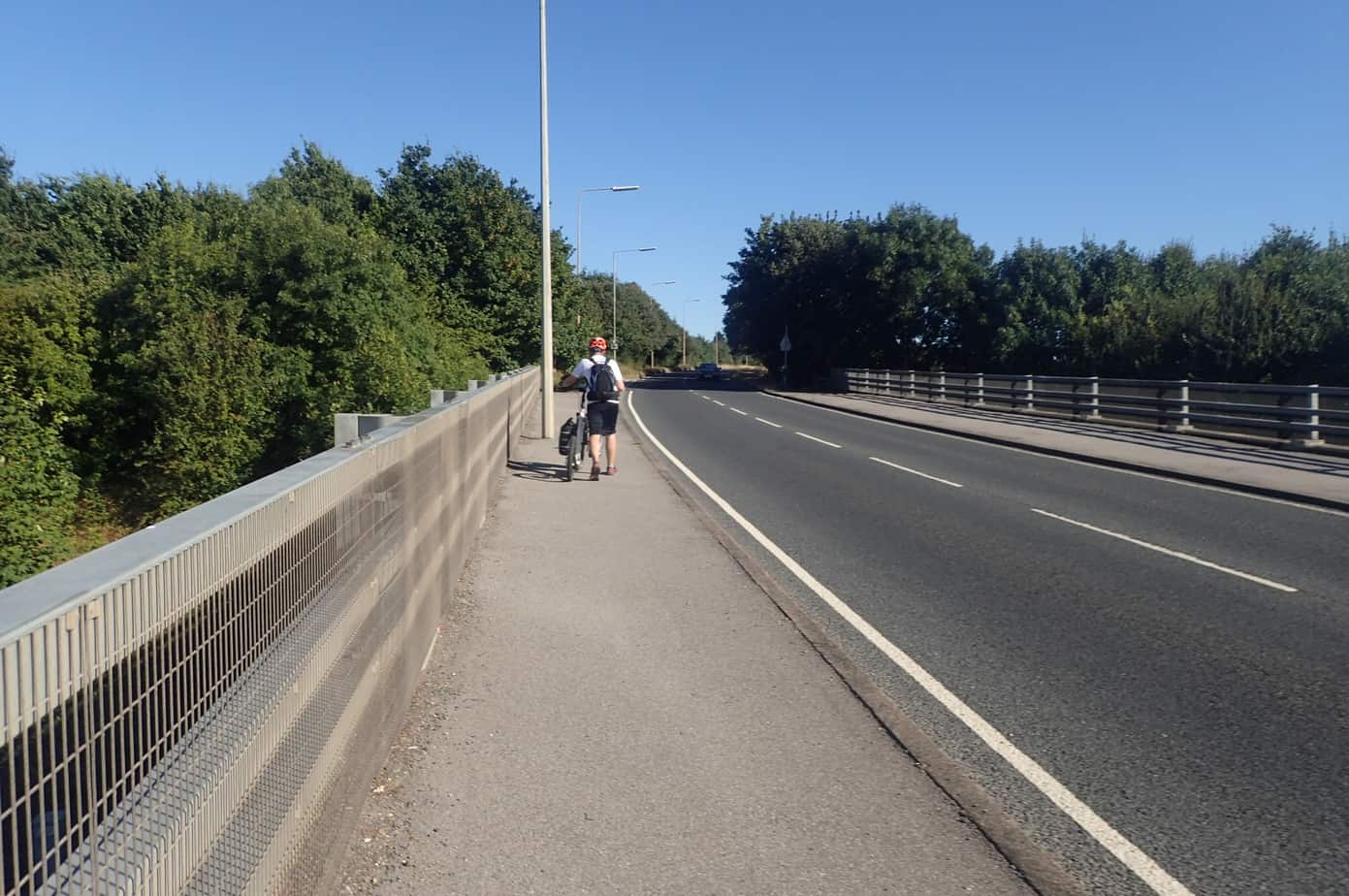 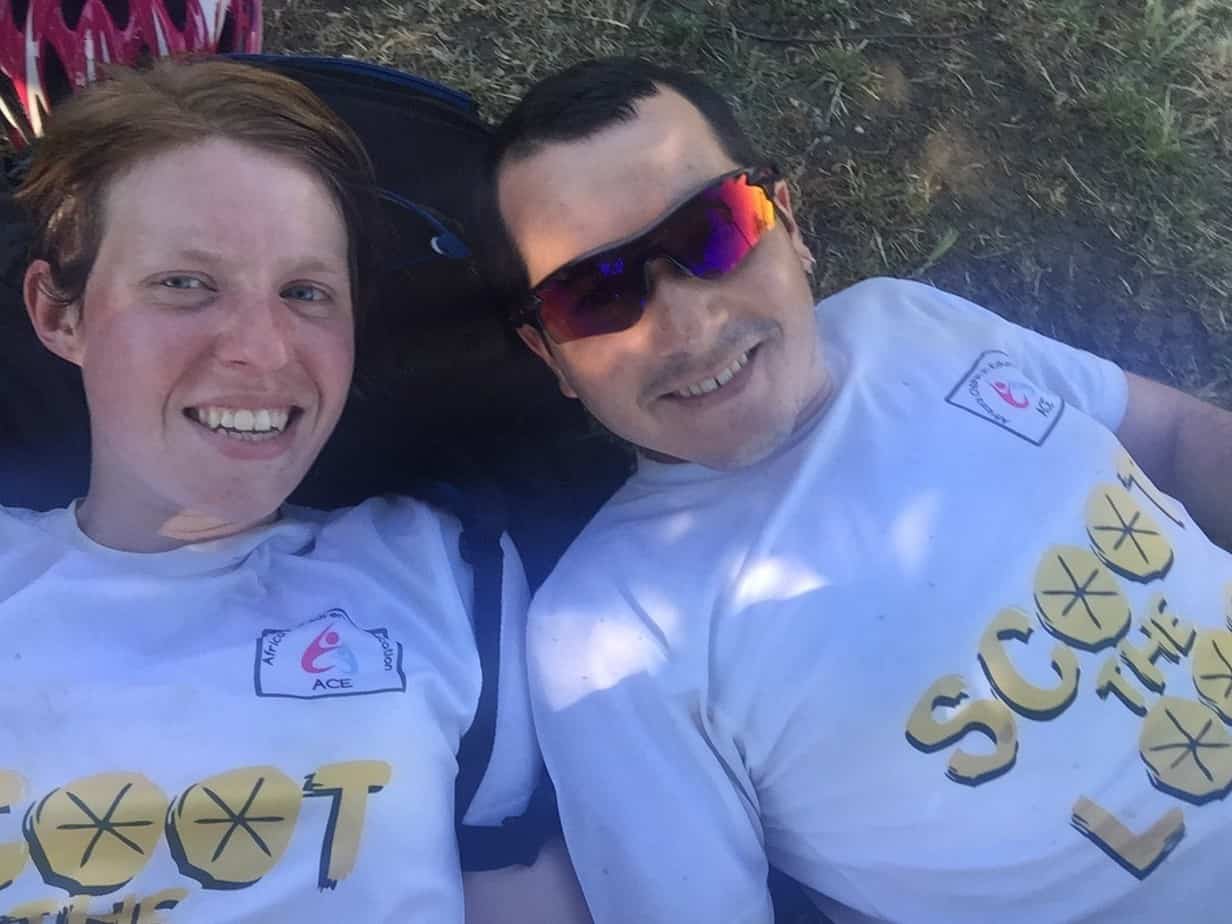 Keep following our Scoot the loop: Day 3, Day 4 and we finished!