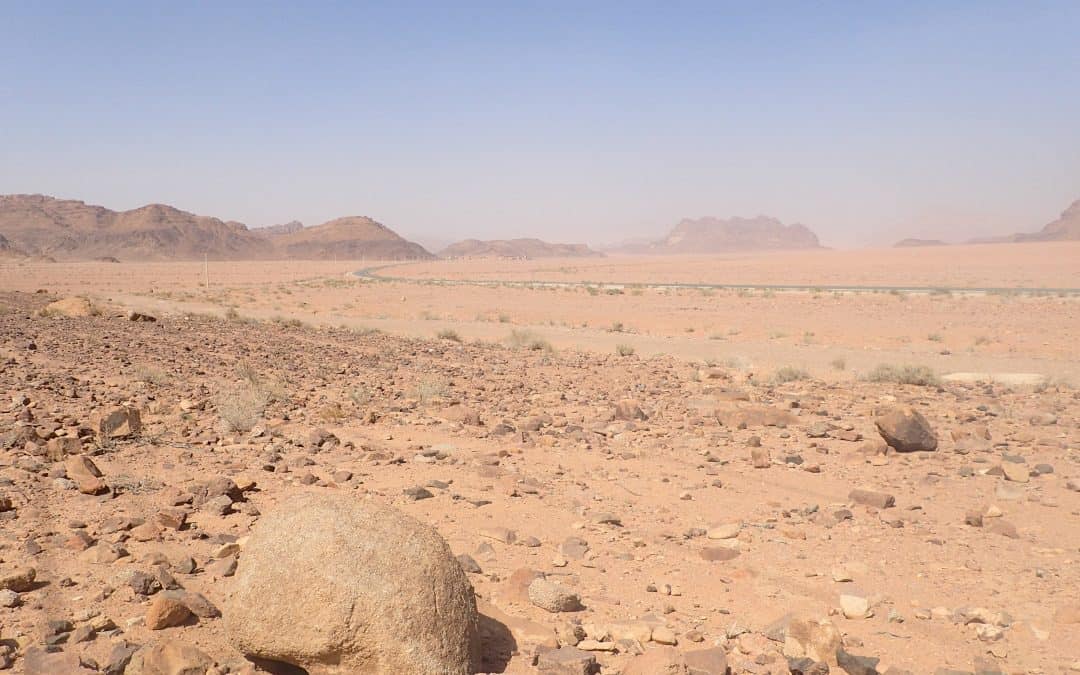 About an hour in to sleeping I really needed to pee. We were perched up high which meant I had to scramble down to find a pee spot, so naturally, I ignored it…..until eventually, I accepted I wouldn’t be able to sleep until I just got on with it. Back in the sleeping bag post-wee I felt too hot…then too cold….then I felt really uncomfortable because my heat rash flared up….then the full moon was right above my face making it really bright….oh and let’s not forget the gusts of wind dumping sand on my face every so often (ahh the desert).

So it wasn’t my best nights sleep, but actually, I didn’t mind because being in the open with the views and the stars felt so great. It did mean that I started the day pretty tired though.

The beginning of the end

The end goal of the day was Rum village marking the end of our expedition. I was excited about having a few days to rest and get clean and to reconnect with friends and family. And equally sad to be finishing the hike. I’ve been amazed how I’d taken to the hike and how much at home I felt sweating it out doing 25km a day and being covered in sand 24/7! I think I must’ve been a desert person in a previous life which might be why I ended up marrying an Israeli?!

The first 7km felt like a real slog. All on sandy terrain and with a gentle incline. I was really focusing on one foot in front of the other.

Cal and I then picked up the pace after a break and felt a new lease of life to get us to the town of Shikira (or Shakira Shakira as we were calling it!). It turned out to be a really creepy place. Full of half-built empty buildings. It felt like we had stumbled onto a horror movie set.

I was really down to the last of my rations and had just a few broken crackers to last me 25km. 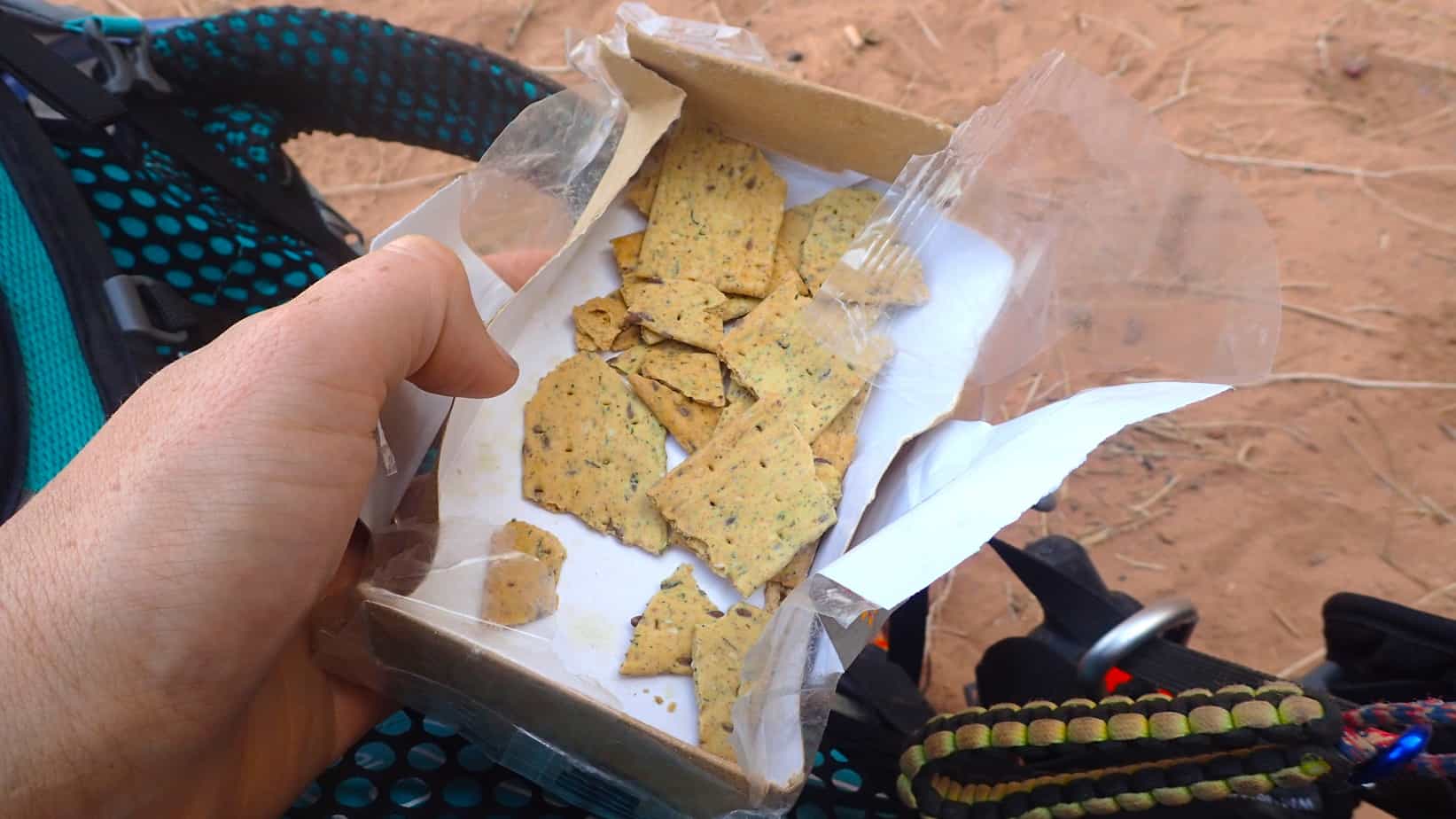 We now had just 12km left and all this was on road. It was crazy hot…easily the hottest day yet and I could feel the heat radiating off the tarmac. It got pretty dull walking in a straight line next to a road. The worst is you can see your destination in the distance but no matter how far you walk it just doesn’t seem to get any closer!

Every so often a car would stop asking what we were doing before offering a lift, a hotel or a guide. It was endearing the first few times and then a bit annoying as you’d have to say 10 times ‘no thank you we want to walk’. 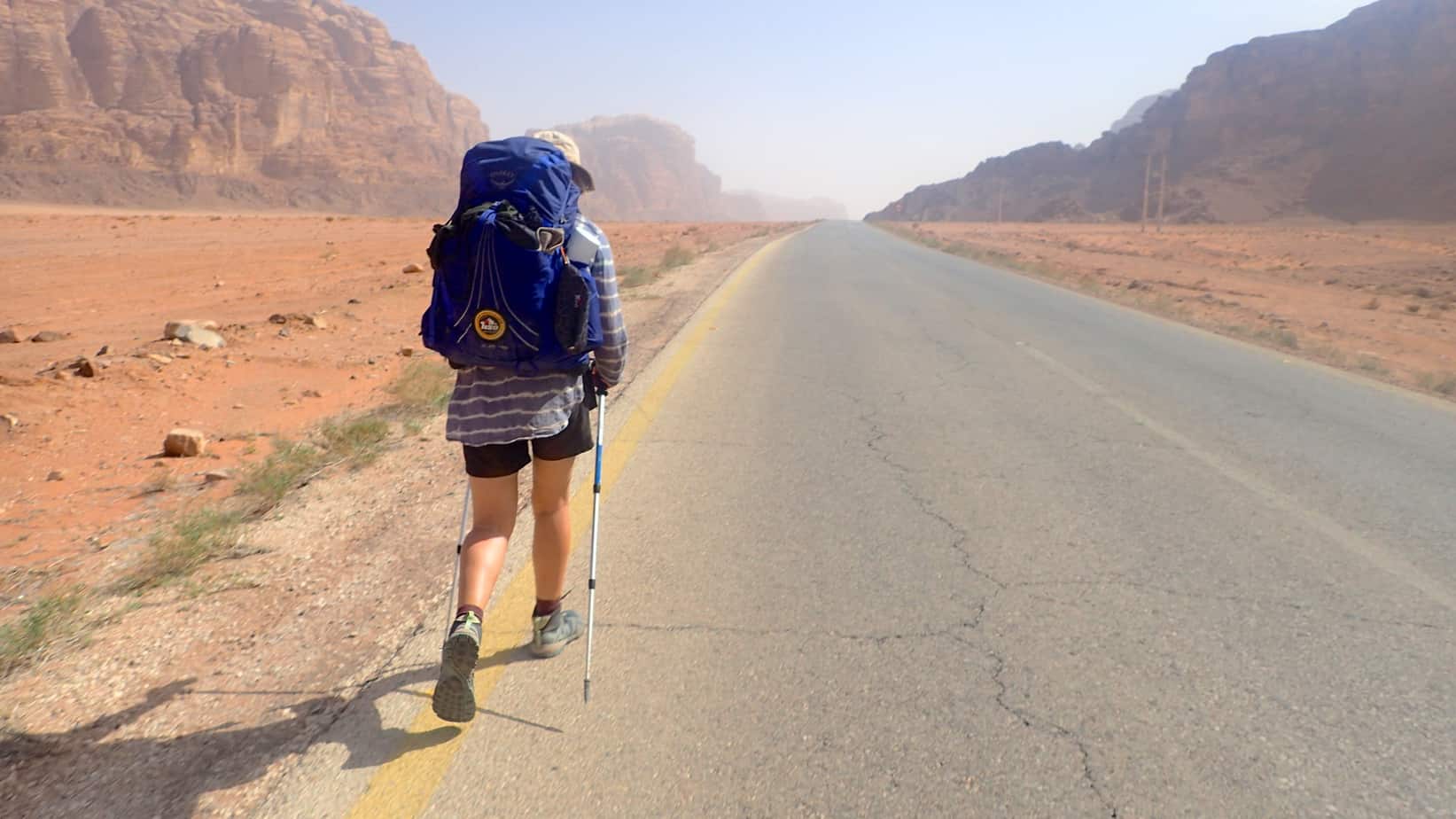 We started a countdown from 5km and then suddenly we are on our last km and then, there.

Rum Village was run down and sparse. All hopes for a celebratory ice cream went out the window and instead I had to settle for a rice and salad dish at a local restaurant. After such a hot day I felt pretty sick so didn’t eat much.

We had planned to wild camp that night but I decided to stay in a Bedouin camp nearby. It was a good opportunity to sort through my kit and have an uninterrupted nights sleep without sand being blown in my face. Ahhhh…simple pleasures! 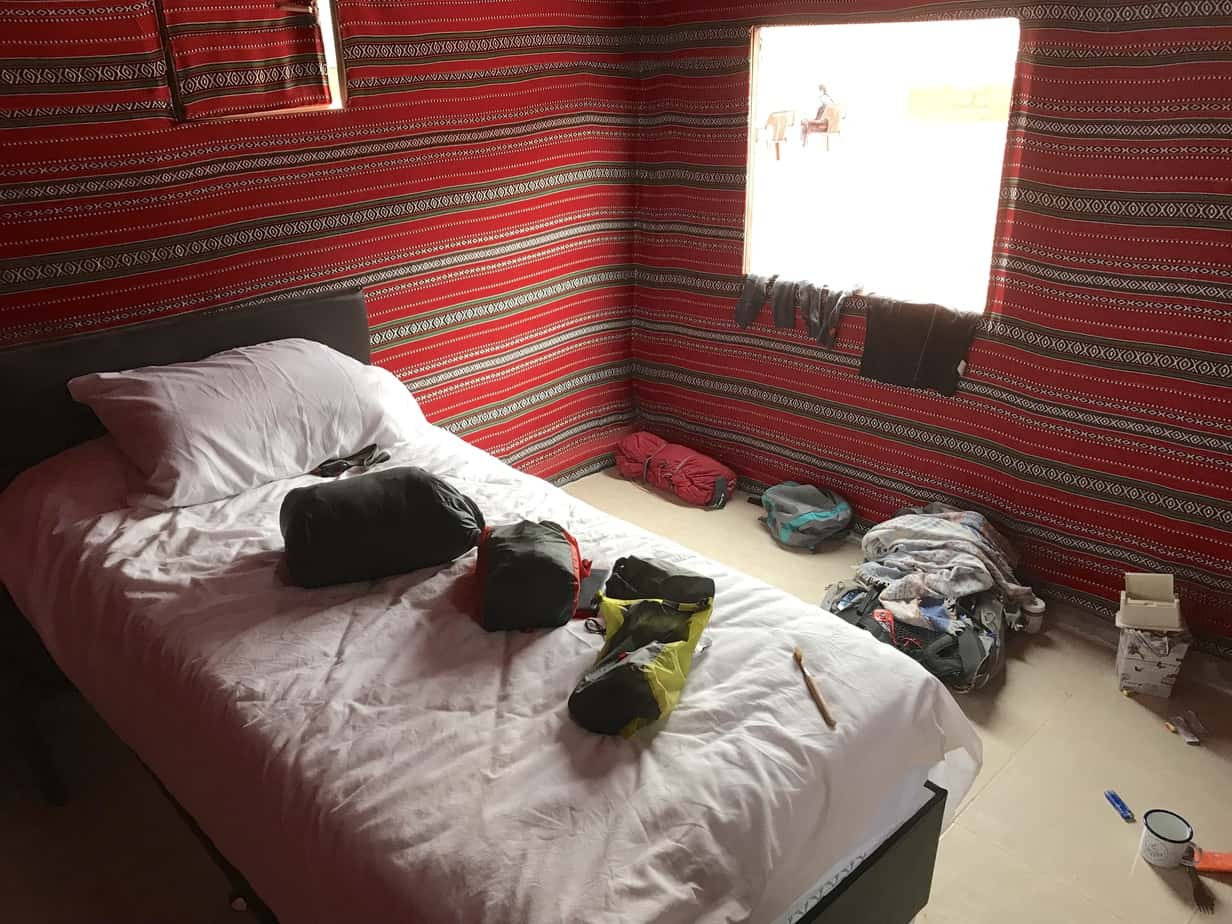 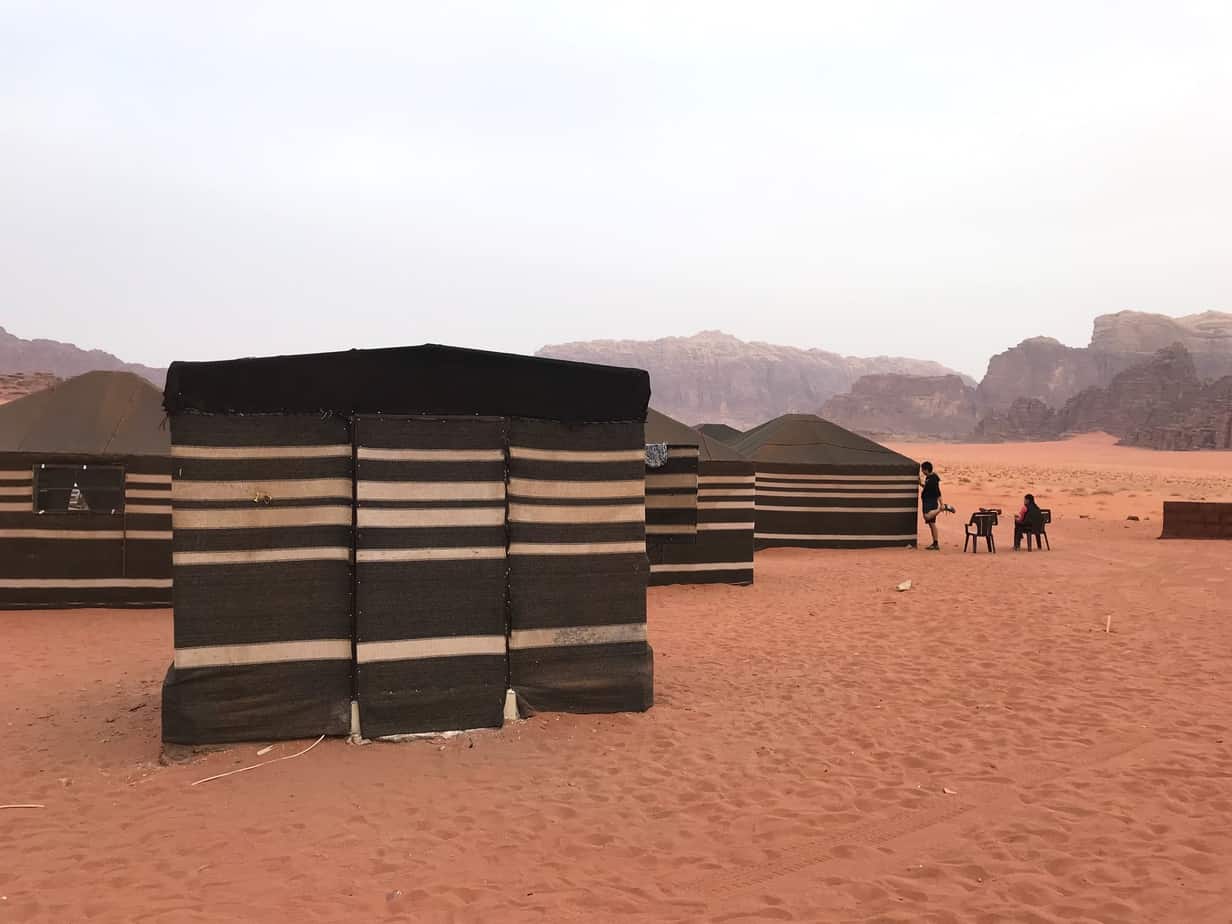 The next day was meant to be spent sightseeing in Wadi Rum and enjoying ourselves but it didn’t go to plan. Cal felt ill in the morning and then mid-afternoon I started to feel ill. I knew I was just tired and in need of rest. Quite often at the end of an expedition (no matter what length) my body and mind just give up. It knows it doesn’t need to keep going anymore.

It was at this point that I had a run-in with someone….someone not in our team but involved in the expedition. Someone who was being way more involved than they were meant to and was being quite aggressive in their confrontation. He questioned my ability as a leader, my professionalism and choices I’d made (he really didn’t hold back). This tied into differences we’d had in the groups previously that ultimately came down to us having different expectations of the expedition – how we should hike it and what rules we should follow – so it brought all that up to.

I was already drained and I felt like I’d just been hit by a bus. So I did what I normally do when attacked and tired in the desert. I cried…a lot!

I questioned if I should share this with you but I pride myself on being honest and this was the reality of my expedition! I’m fighting for gender equality in adventure and here I was being shouted down despite being the more experienced and qualified of the two, being told that I wasn’t good enough by a man who barely knew me (and who did a lot of speaking on behalf of women). Would he have spoken to me the same way if I was a man? Maybe….but I don’t think so.

So often people see the glossy photos and videos that come from adventures. Which are a part of it. But expeditions always come with negative realities (even if people don’t choose to share them). External pressures, differing expectations, injuries, group dynamics, heat rash, theiving guides, mistreated camels, broken tents, never-ending heat….these were the realities of my expedition. They broke me and built me and are as much a part of the journey as the laughter, warm people, good times and heartwarming scenery.

The reality on this expedition was that the downsides outweighed the good.

So there you have it. I often I find the end of an expedition a bit of an anti-climax. And this was definitely one….with a cherry on top. I was done! But all was not lost, oh no. Because firmly in my sights was my little saviour named Movenpick…..read all about that here!